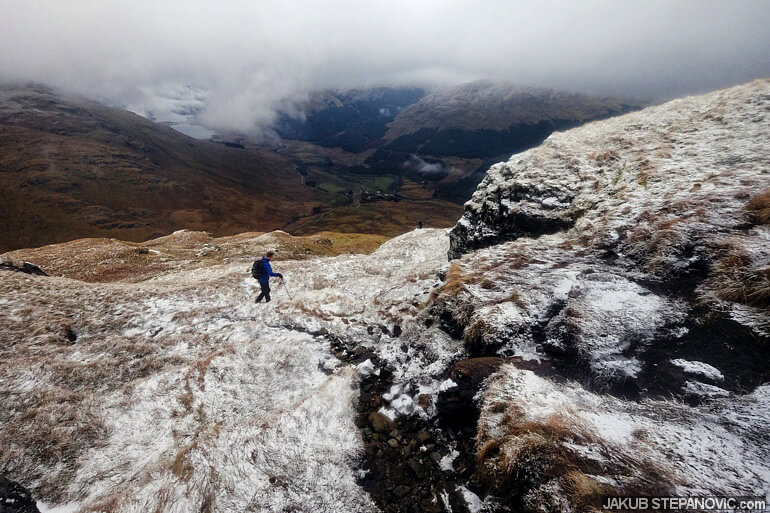 The University of Dundee has a mountaineering club that organizes hikes around Scotland. I joined it last year but didn't attend their trips yet, as I broke my knee last spring. It hasn't been too long since I had to learn how to walk again, so I didn't want to overdo it. However, it felt pretty decent recently, so I decided to join the club for their first trip of 2017 last Sunday. Together with nine other members, we hit the road. 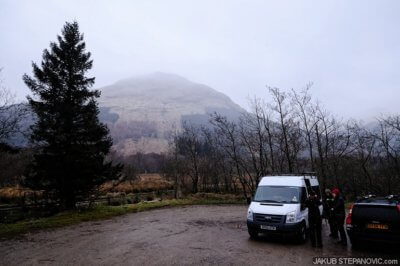 After some two hours, we arrived at the parking lot near Loch Doine. 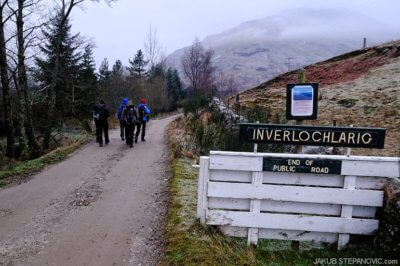 We started at a gravel road, but shortly left to the wilderness. 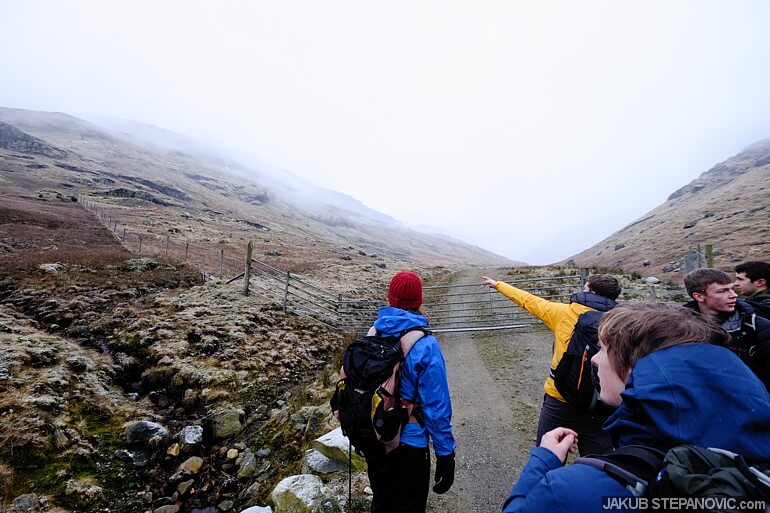 “There. Straight up. The best line.” 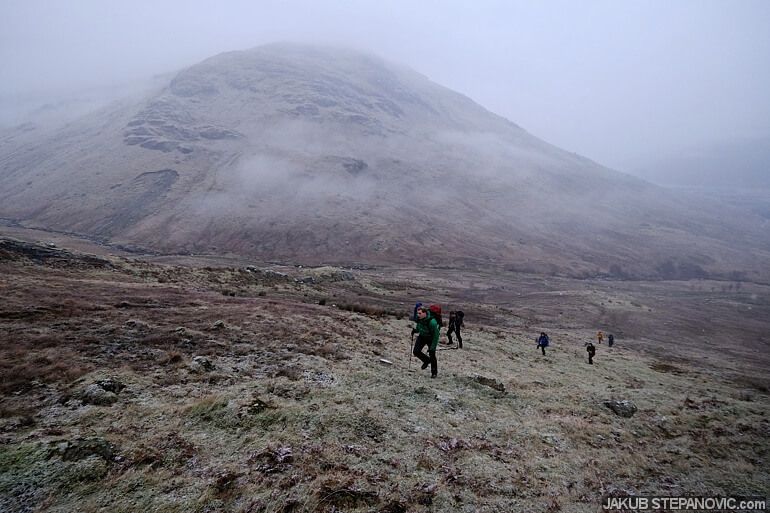 Climbing. The knee worked properly, and it felt good to be back on a hill. 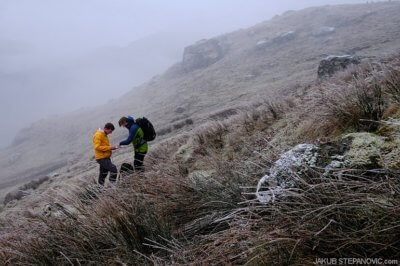 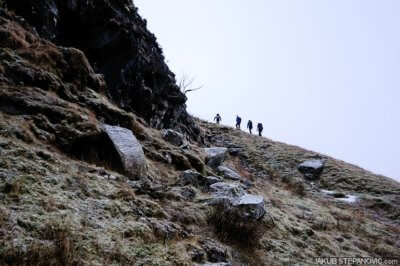 Somewhere halfway up the ridge, we entered a cloud. Distant visibility has gone straight away, but the steep incline continued. 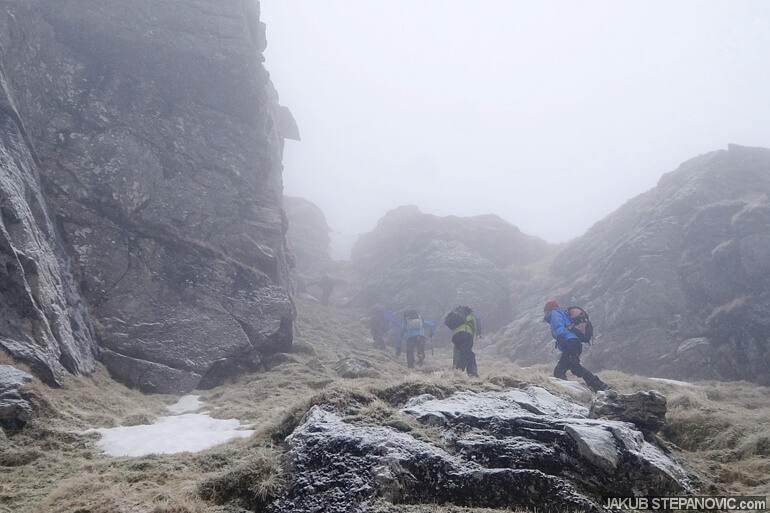 After this section, we finally reached a levelled path. Just kidding, there was more climbing. 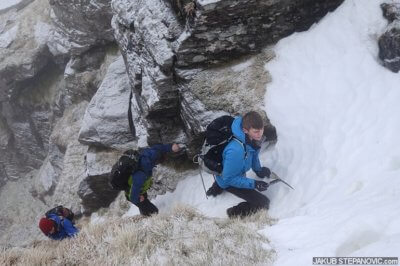 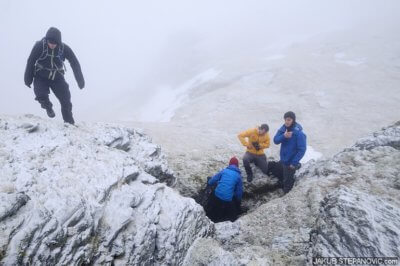 But once we got up on the ridge, the terrain got a bit more user-friendly, indeed. 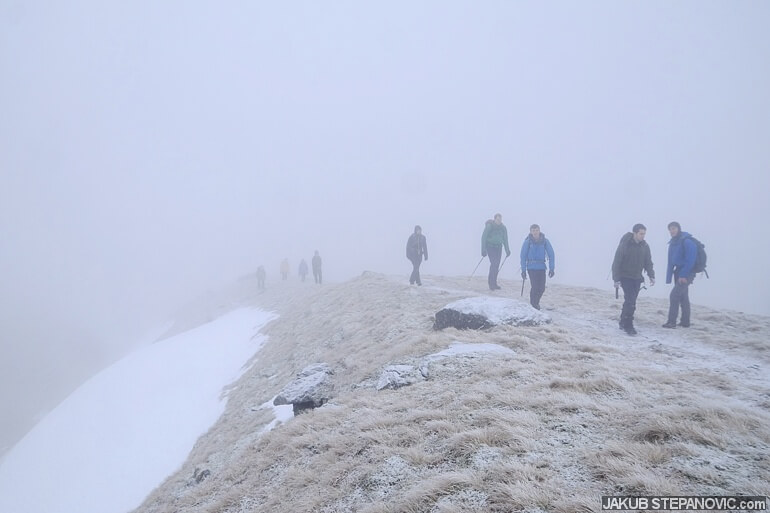 From this point, it was only a matter of minutes, and we stood at the summit, where we were welcomed by a thrilling, 360-degree view on a thick greyness. 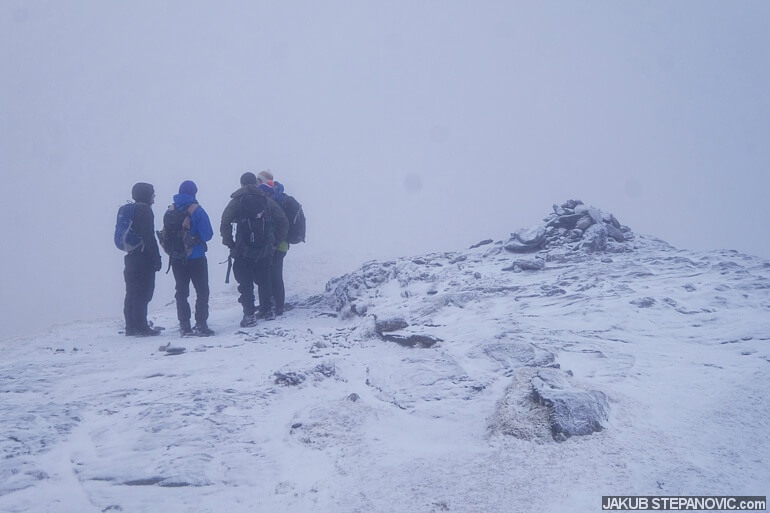 After this achievement and snack/chat time, we went back down. It went.. well, faster. 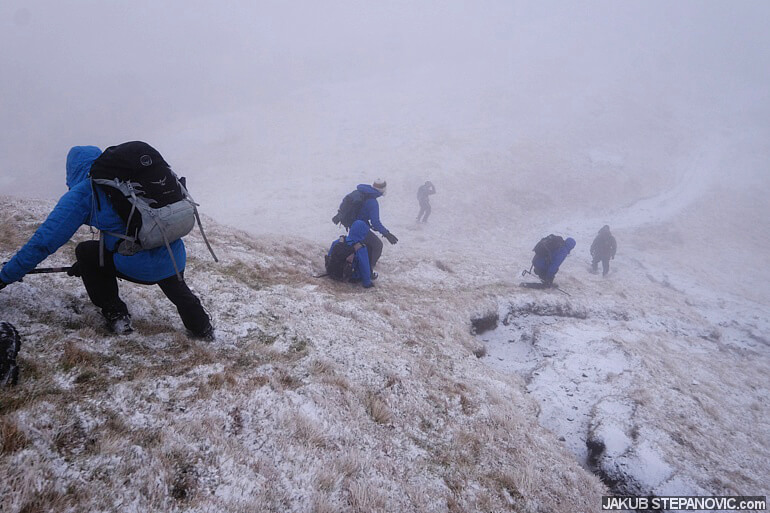 Patches of snow worked well as nice slides and propelled the downhill progress. They also eventually served us as a training ground of ice axes handling. 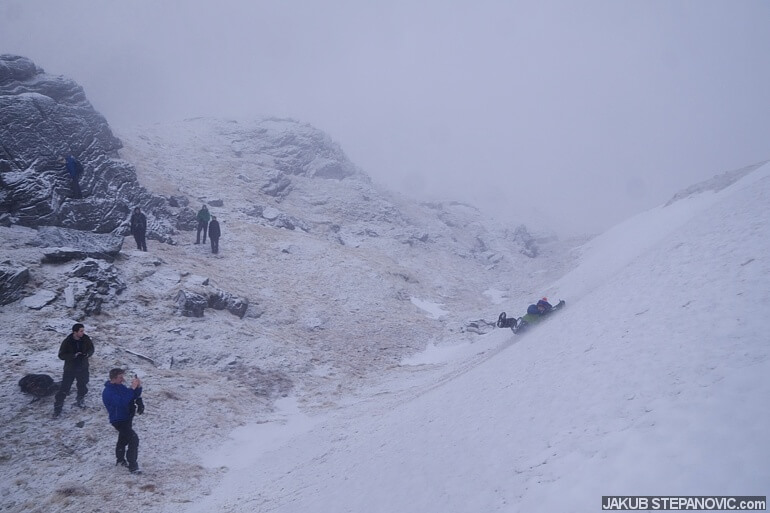 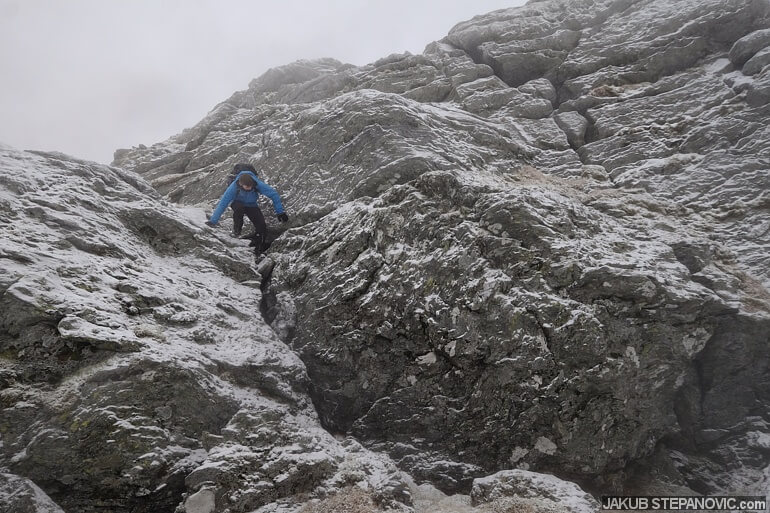 With the decreasing elevation, the snow layers thinned, and the soil quickly changed from the solid frozen state into wet bogs. 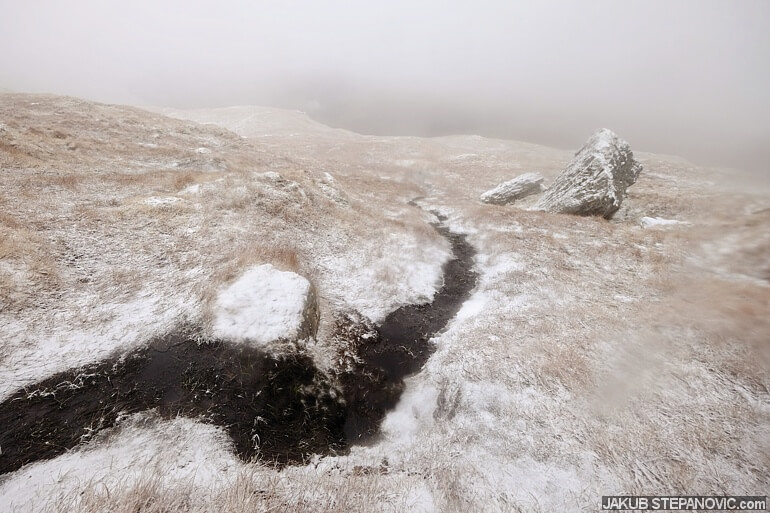 This is what you get when your lens gets doted in short rain, and you attempt to wipe it with not-so-dry clothes...

The lack of snow also caused that there was nothing to slide on. The thing is, besides being fast and fun, those slides were also an effortless way down. With this easement gone, my knee was close to declaring my happiness as a historical event. Thankfully, just that time, we exited the cloud, which opened atmospheric horizons to look at. 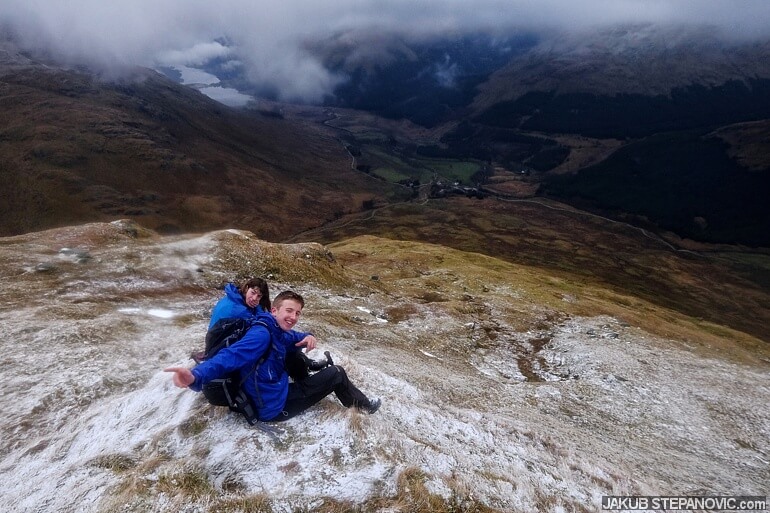 Nevermind the knee; suddenly, everything was well in my world again. 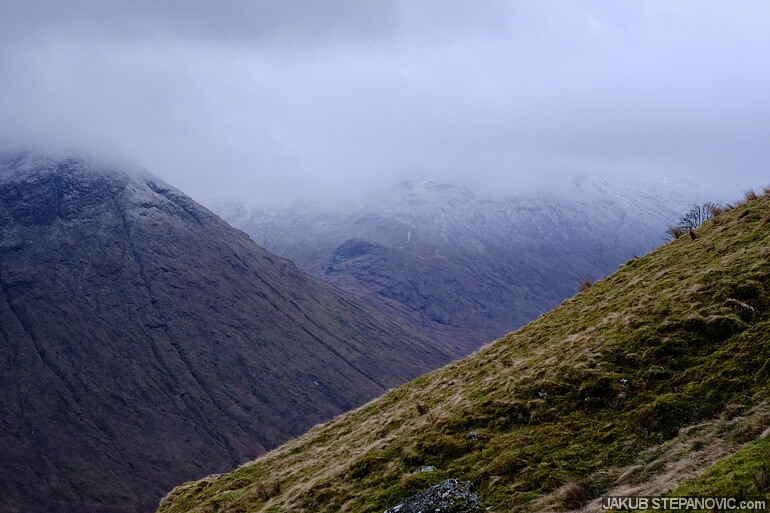 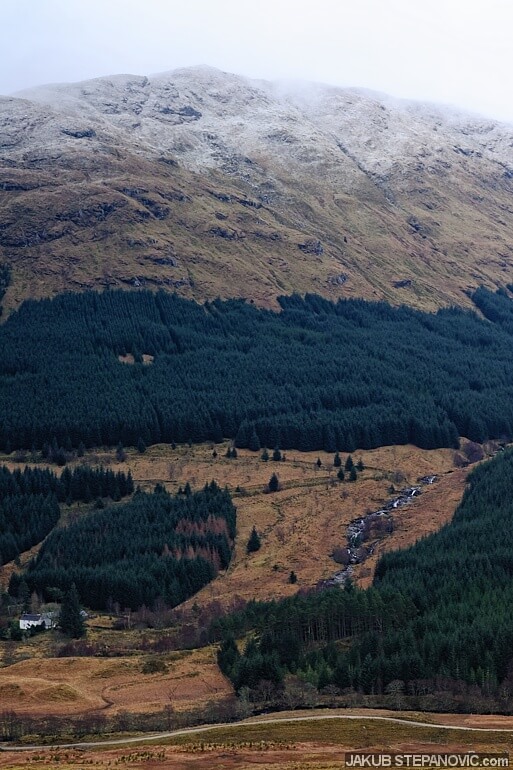 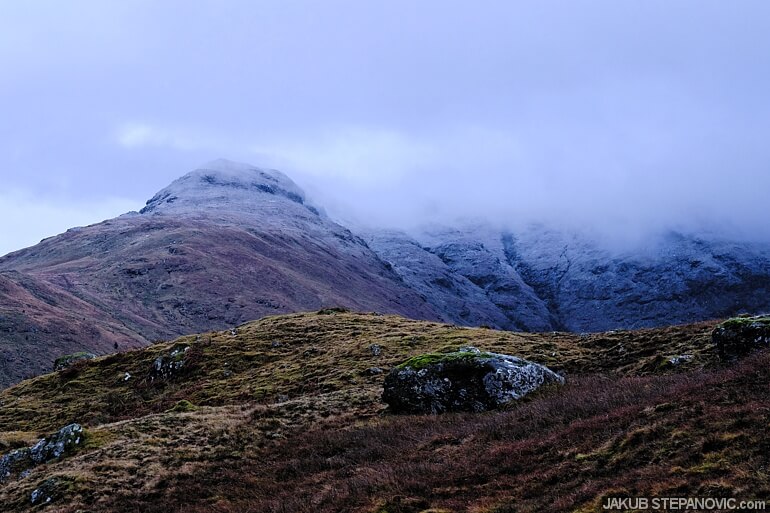 looking back at the mountain we conquered..

Here we started the countdown of the last mile (or-so) to the bus, and that was it. 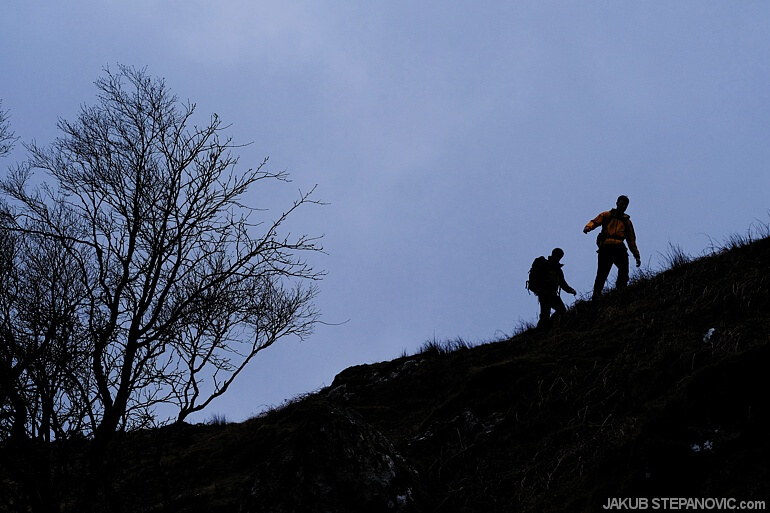 You can read more stories about my adventures in Scotland or visit my Blog Archives for other topics and categories. Thanks for reading!