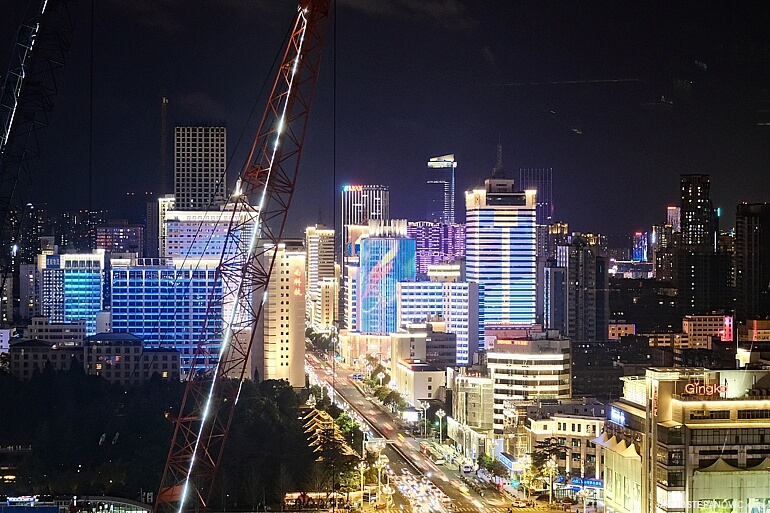 Utilizing a layover to see the capital city of Yunnan province. 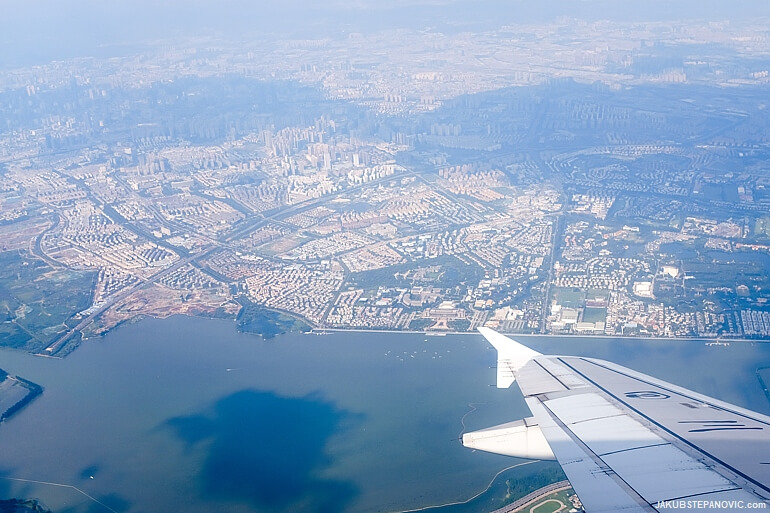 Kunming is the Yunnan's largest city, and so it happened that while visiting the province, I was passing through. Arriving in the afternoon, I took a walk in the outskirts between the airport and the city. 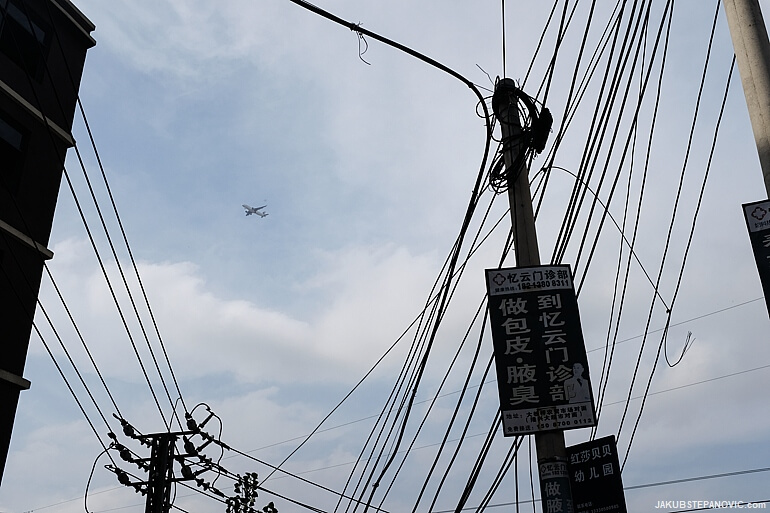 I find these neighbourhoods exciting to walk through. The thing with most modern districts of city centres is that they all look similar, no matter the continent. Not to say that it is wrong, some of the developments bring in amazing architecture that can't be seen elsewhere. However, you get a sense of familiarity with all of them, and with strict rules and regulations, they can be a bit detached. On the other hand, these outskirts, away from the main construction boom, often have an authentic, unique feel. 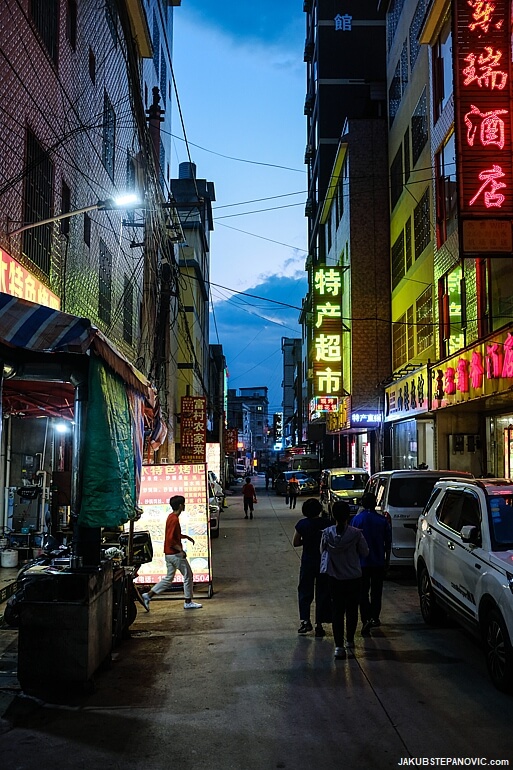 Neon lights brighten the surrounding facades in saturated hues. Walls display raw concrete and tiles, as opposed to glass and aluminum plates, and the amount of convoluted overhead cables and wires is mad. 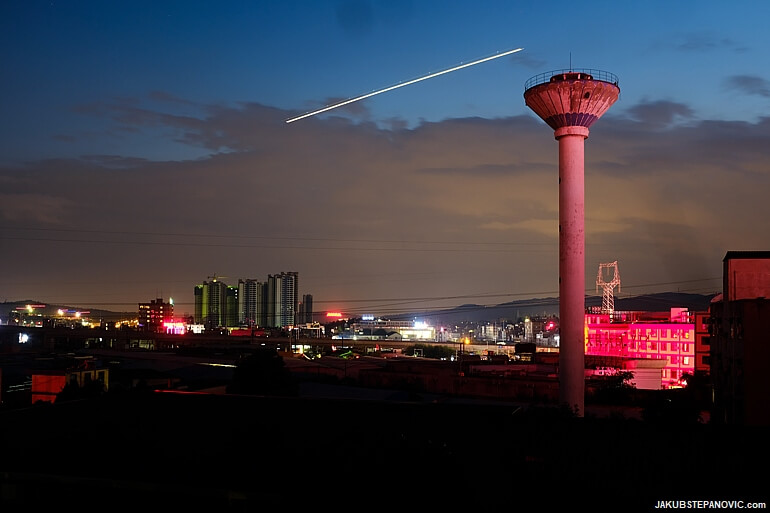 Surfaces are uneven; some streets aren't even paved. And locals interact with each other much more than in clinical business districts. 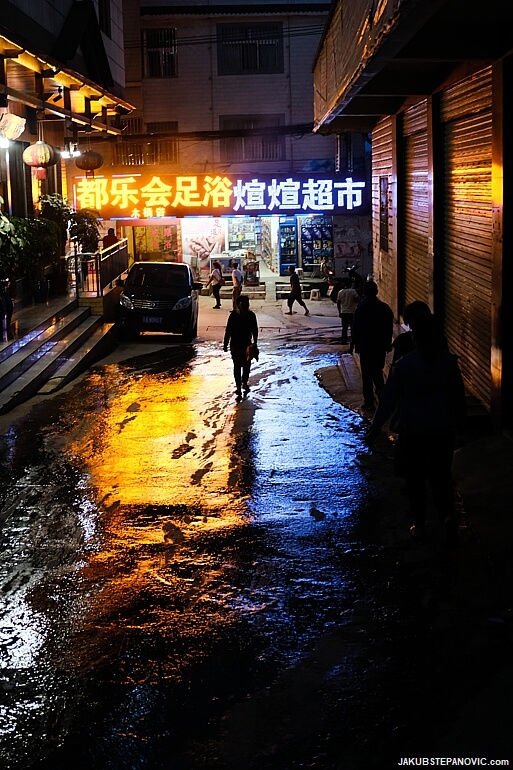 For the next day, I got suggested visiting the Yunnan Ethnic Village, a theme park showcasing architecture and folklore of the province's 26 nationality groups. However, it had a relatively steep entrance fee, and since I spent more money than I wanted while touring the region, I decided to skip any paid attractions here. I've been saying for ages that travelling with a modest budget is the best way to see the world, so I thought to better stick to my words and fix that earlier misalignment.

I saw some of the local parks and the campus of Yunnan University, also with neat gardens. 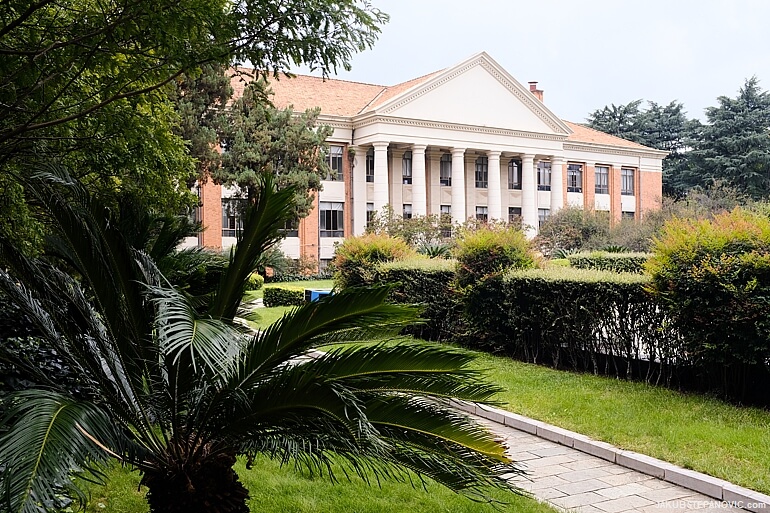 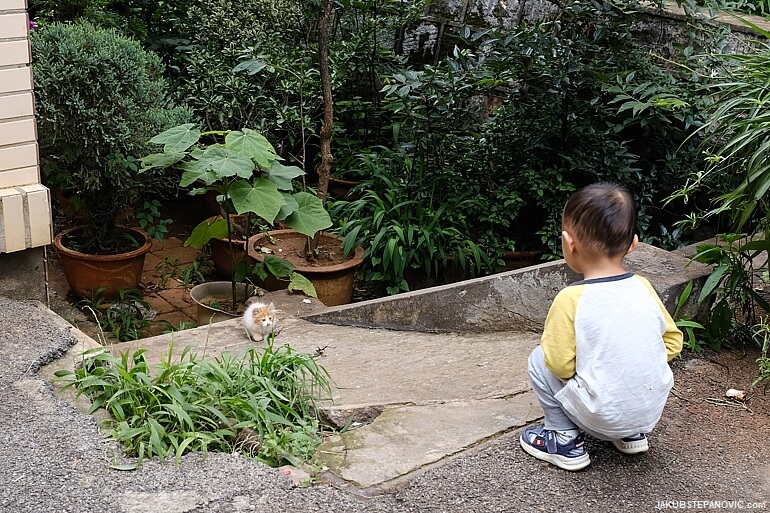 Prolonging the time in green spaces, I then went to Xishan Forest Park, located on a hill west of the city, which supposed featuring good outlooks. The common ways to get there are either by bus or cable car, but there is also a walking trail, which sounded nice, and it is accessible for free. On the way, there was another cultivated garden, where I took a break. 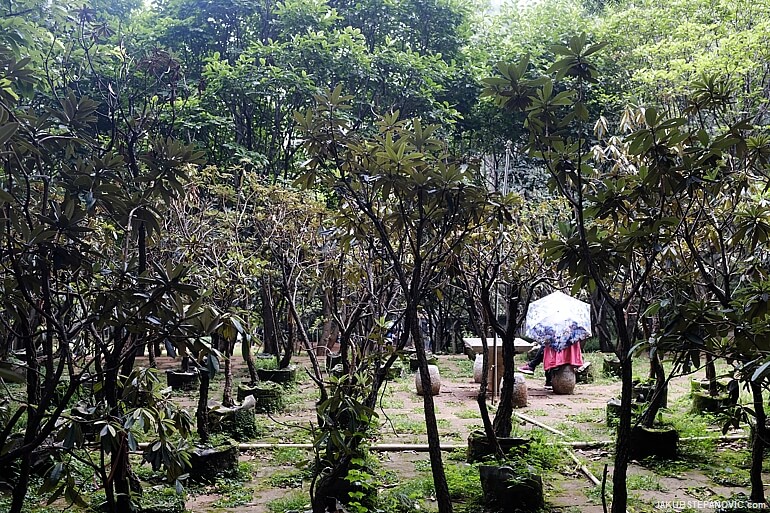 Strolling through the tangle of paths, it started raining. No worries, I thought, getting a jacket from my backpack. When the rain beefed up into a decent downpour, I used a tall tree with thick leaves as a shelter and waited. 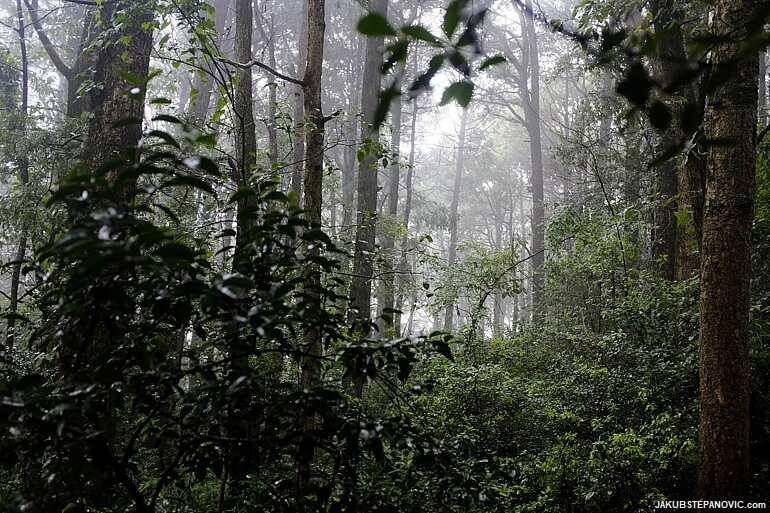 The air got better, the woods around were pretty, but the cloudburst showed no signs of stopping. The tree I was hiding under got soaked and didn't hold water anymore. It was a warm day, but I didn't feel like taking a cold shower while dressed up. So I had to leave and look for shelter elsewhere. Luckily, I found a building with an overhanging roof, which did the trick. Here, looking at a weather map, I saw that I am just at the edge of the storm. 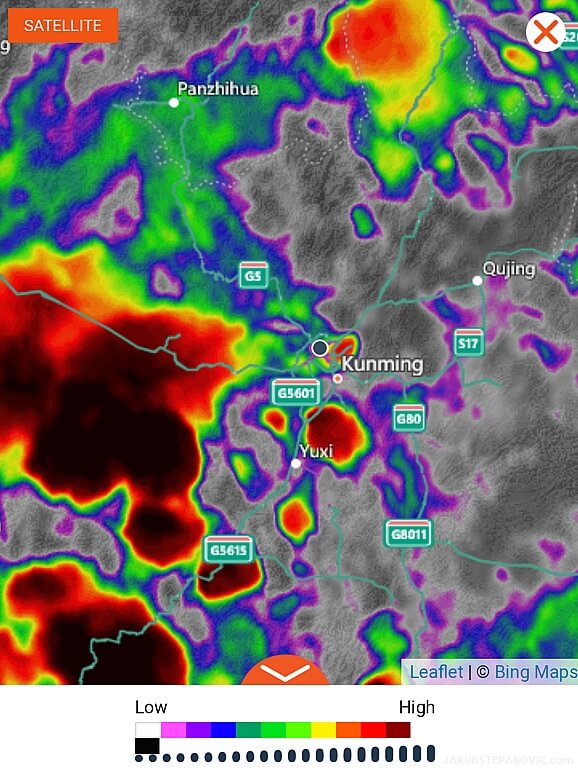 I did not complain, as the deluge of rain that washed me down the Yellow Mountain two years ago was something I could live without repeating. Thankfully, the wind blew in the right direction, taking the storm away. And I continued to see the Huating Temple: 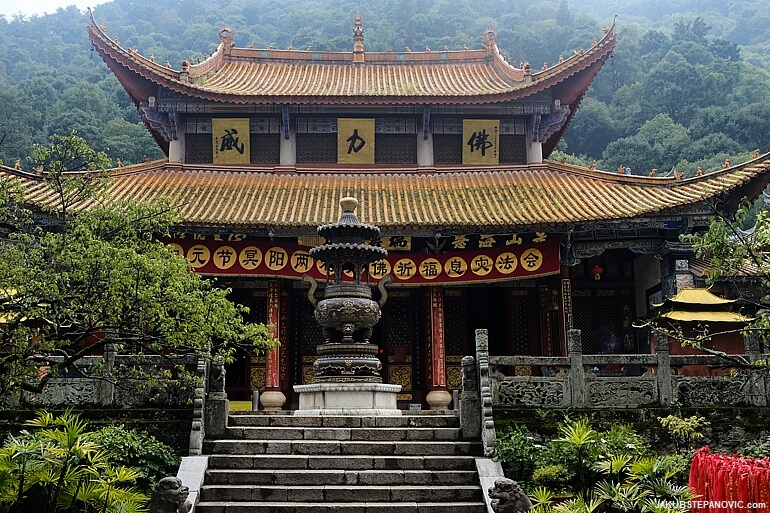 There are multiple neat Buddhist temples on the hill. Further up is another, Taihua Temple: 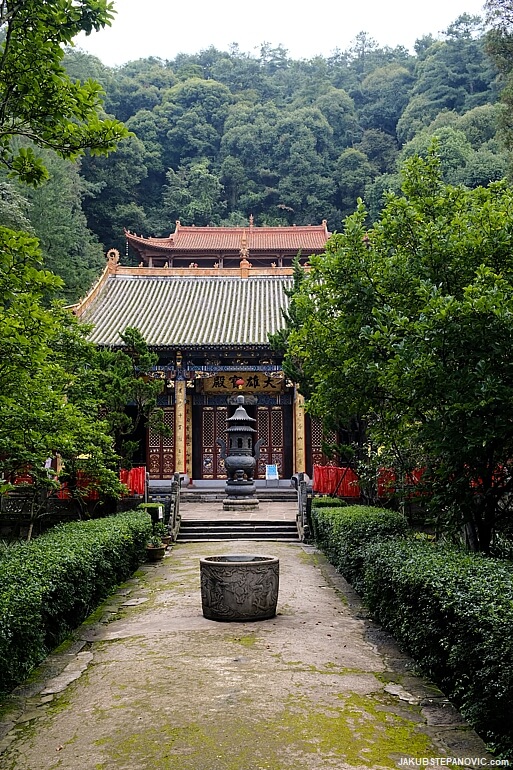 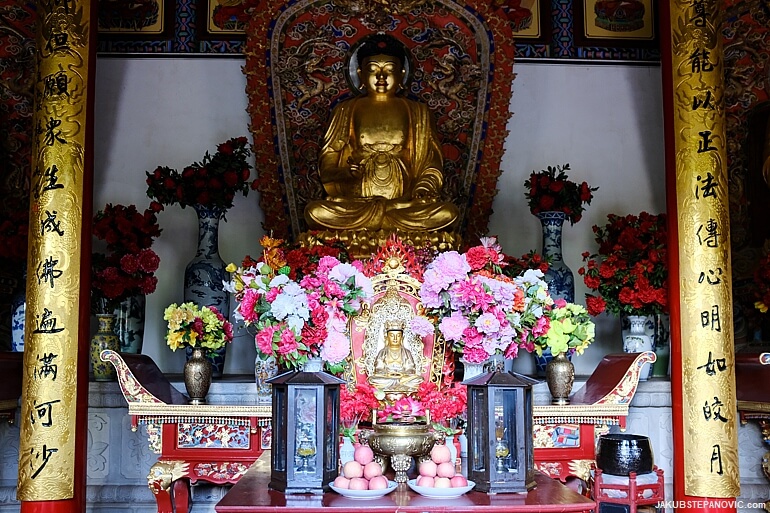 Both of them were pleasant stops. And the walking path itself was enjoyable as well. 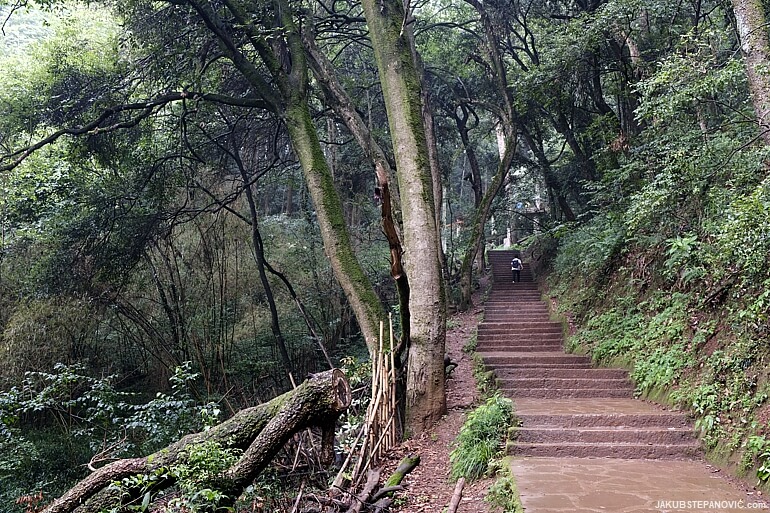 However, there were no distant views. The trees opened up every now and then, but instead of the city, they revealed only more vegetation and the road below. 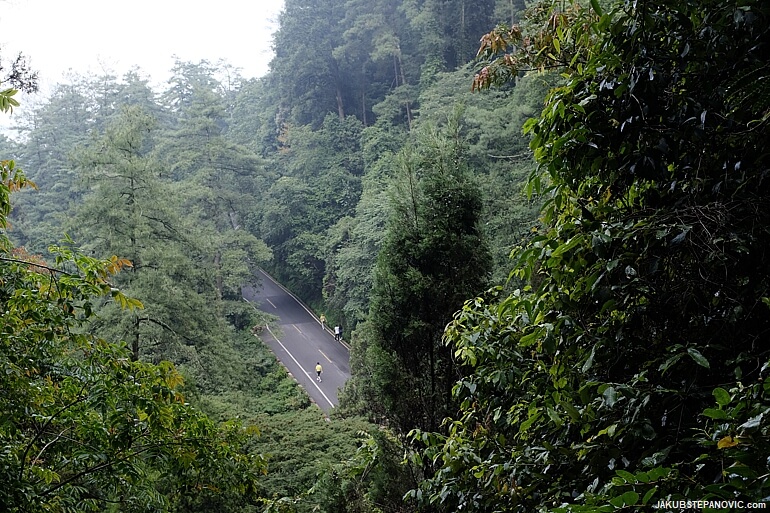 Meanwhile, there were other things to see besides the greenery. One of which was the omnipresent Chinese surveillance system. Yep, you are tracked even in the forest. 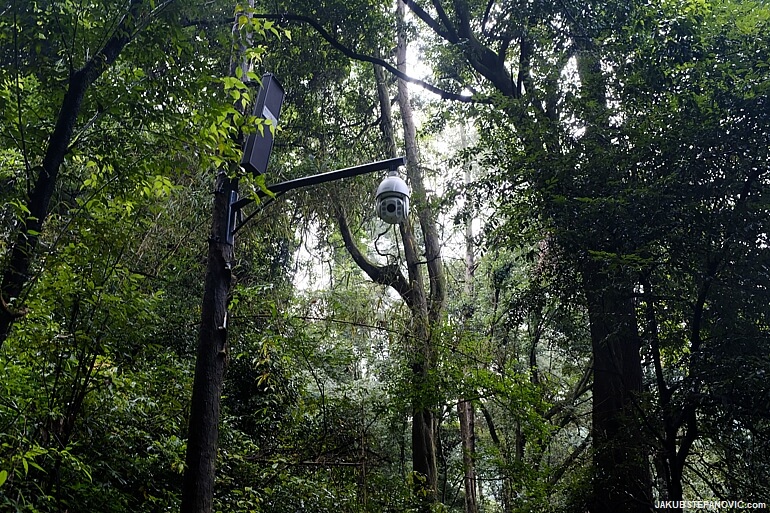 Another artificial element next to the trail was this sign, full of bullet holes. 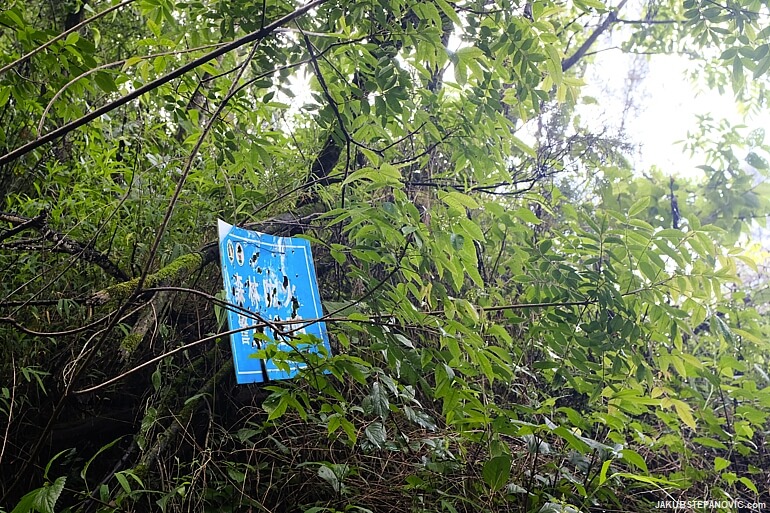 I don't get this habit of shooting signs. There's nothing wrong about practising shooting on target, but using public signs is lazy and disrespectful. I remembered seeing plenty of road signs in the US being trashed by bullets, and I really don't get it. Anyway, while I don't know what this particular sign said, it felt weird nonetheless. Even more so, since there are the cameras all over the place, shouldn't they prevent people from shooting around? Ummm.

I kept going and reached the top of the hill. 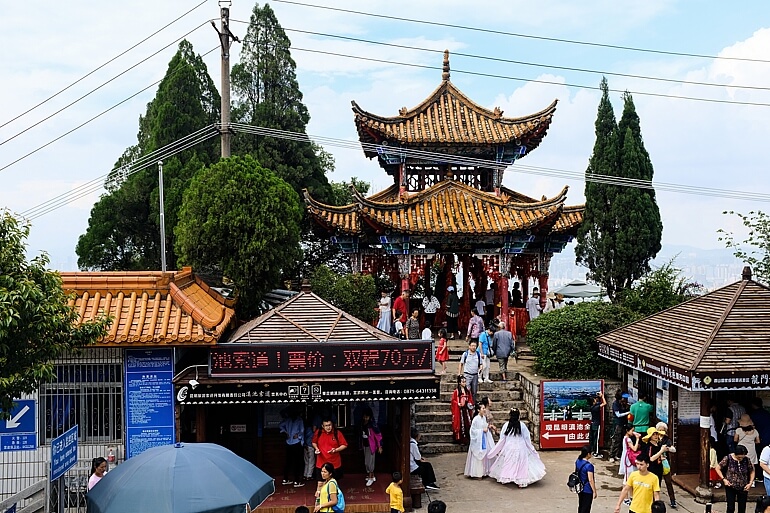 After the forest journey, I was eager to see the view. However, I found that you have to pay to get closer to the edge and enjoy the outlooks. It made me appreciate the countries where they allow people to enjoy the land free of charge. The "People's Republic," unfortunately, is not one of them, as the national parks and most of the reasonably accessible natural viewpoints are reachable only after a fee.

But, I was determined to fulfil my quest for a free view here, and after exploring some alternatives, I eventually scored. 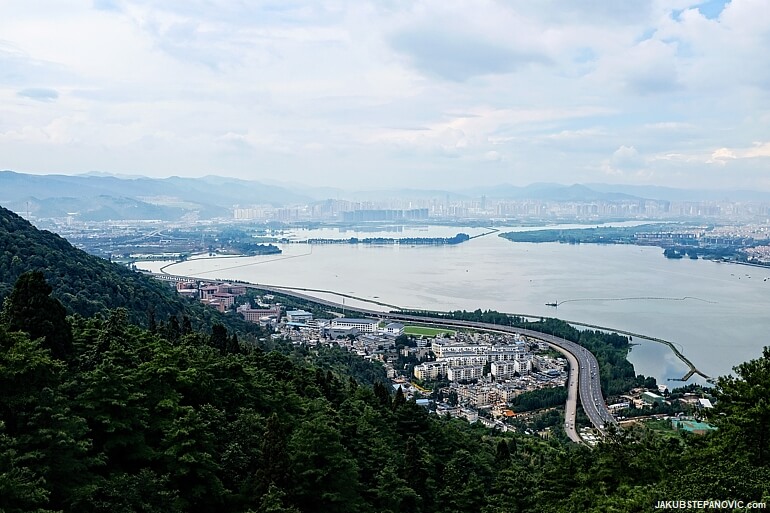 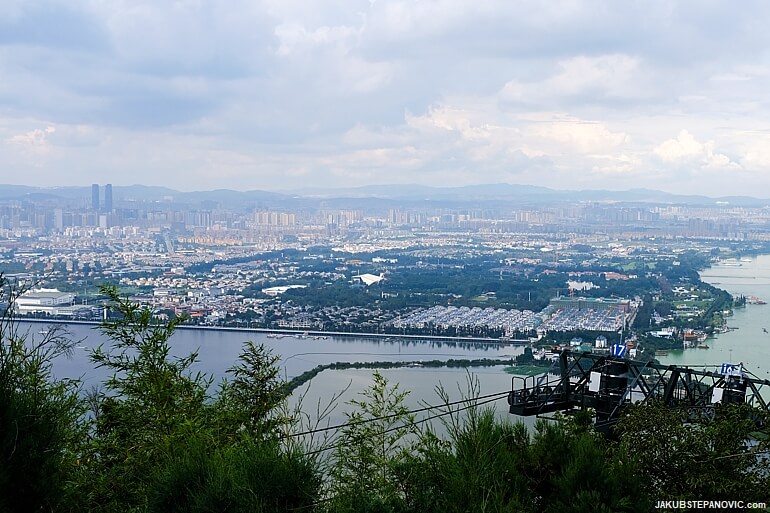 Going down, I decided to follow the road, as it is faster. Somewhere halfway down was a nice bonus: a freshwater spring. As with the land access, water is another commodity easily to be taken for granted until you are in a country where the tap is non-potable, like in China. So, joining locals and refilling my water bottle felt pretty great.

Once down from the hills, I got on the subway back to the downtown. Scanning a map revealed a cluster of skyscrapers around Beijing Road, so I wanted to check it out. 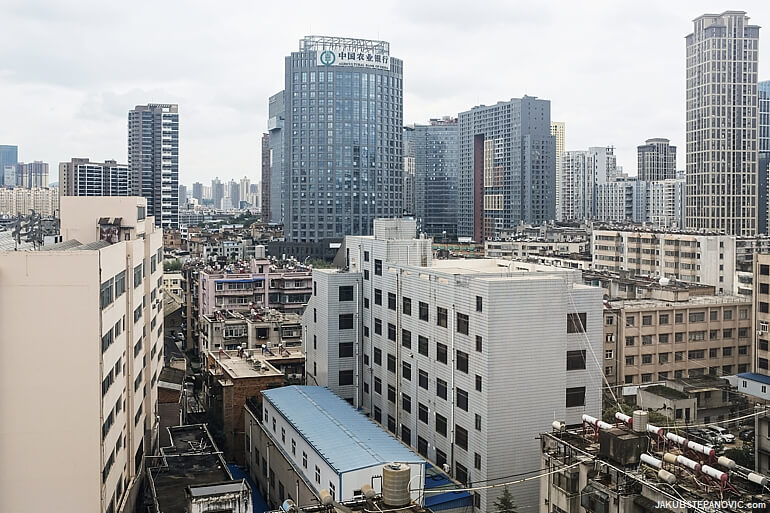 Starting a few blocks from the North Railway Station and heading south, it proved as an interesting area to visit. 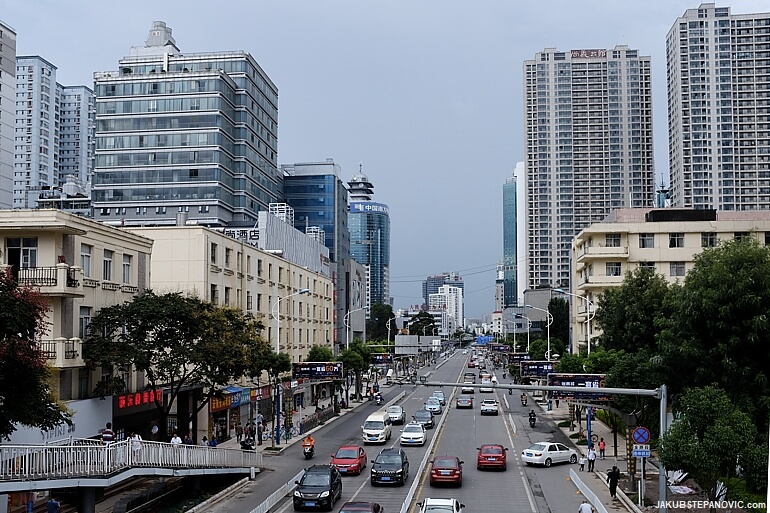 After passing the Dongfeng Square, I saw this cathedral: 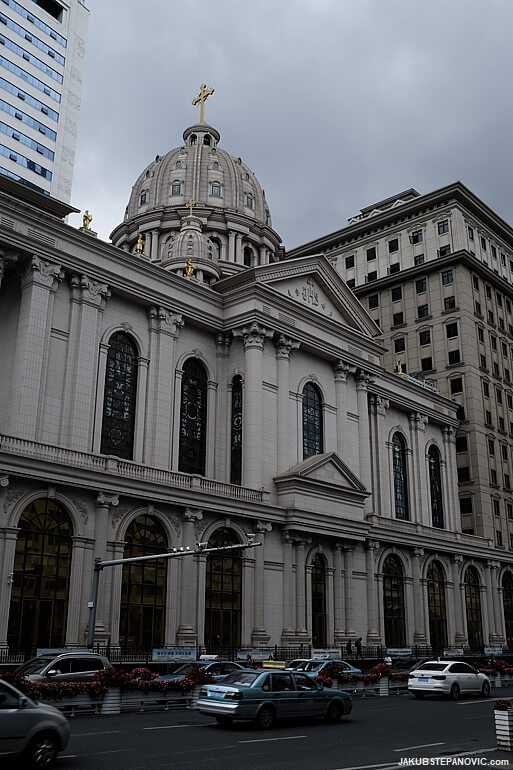 As Christian structures are rather scarce in this part of the world, it took me by surprise. It is the building of the Roman Catholic Archdiocese of Kunming, and it made me curious about the topic. So I looked up some other churches located in China, and it turned out that the oldest was constructed before any church in the continental US. Every day is a learning day!

About a block from here, I met a friendly guy from Israel, and we spent the dusk watching the city from above, chatting about our experiences from China and beyond. 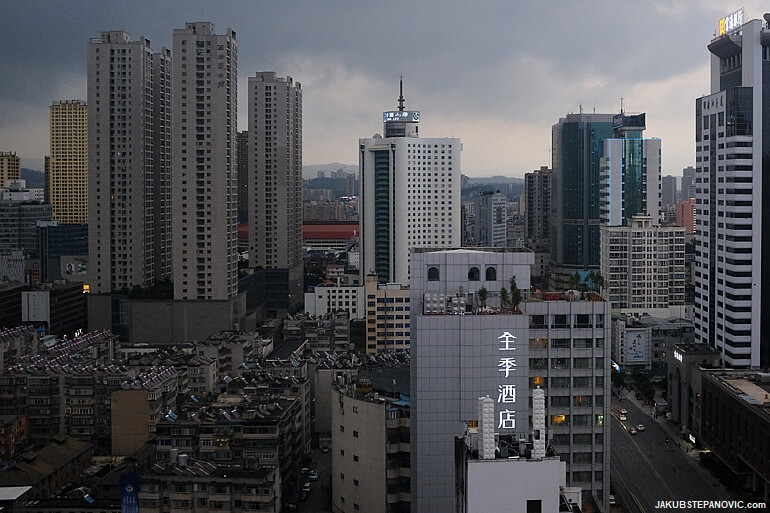 It was a good talk, and the cityscapes were class, too. 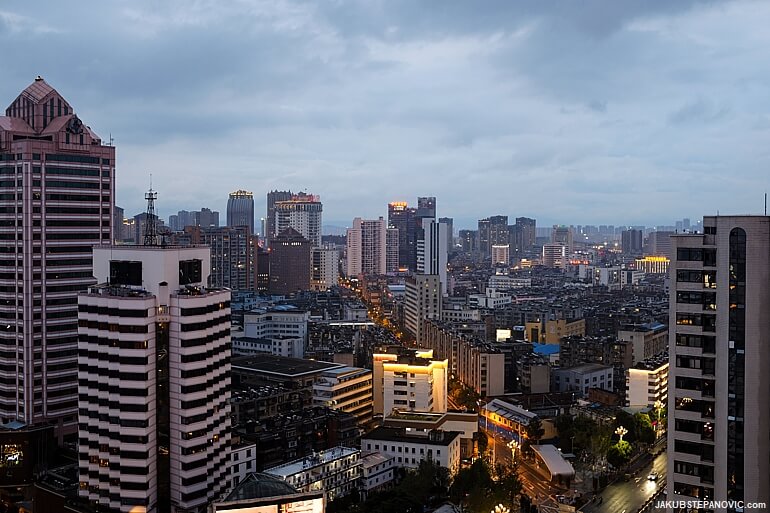 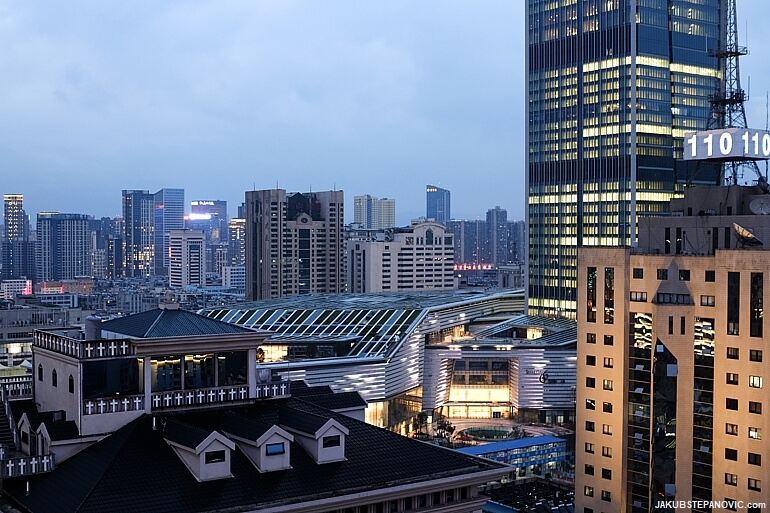 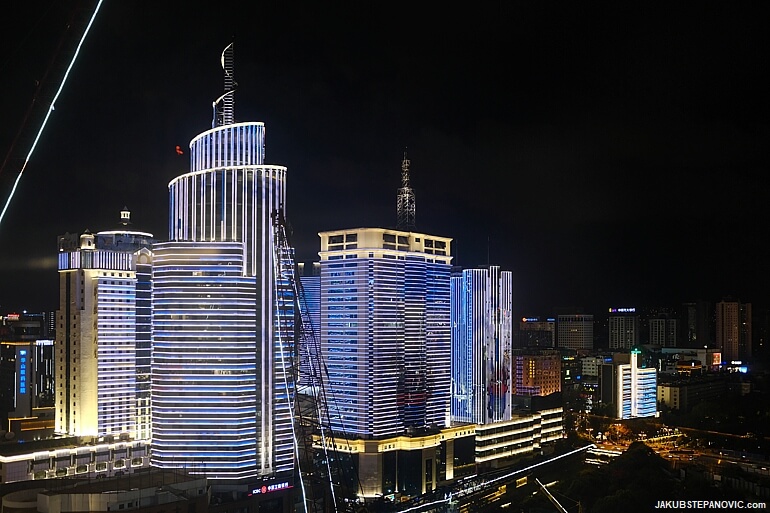 And as it got dark, I got on the tube to the airport, setting off to another adventure.

If you enjoyed this article, you are welcome to explore my Blog Archives for more, like: