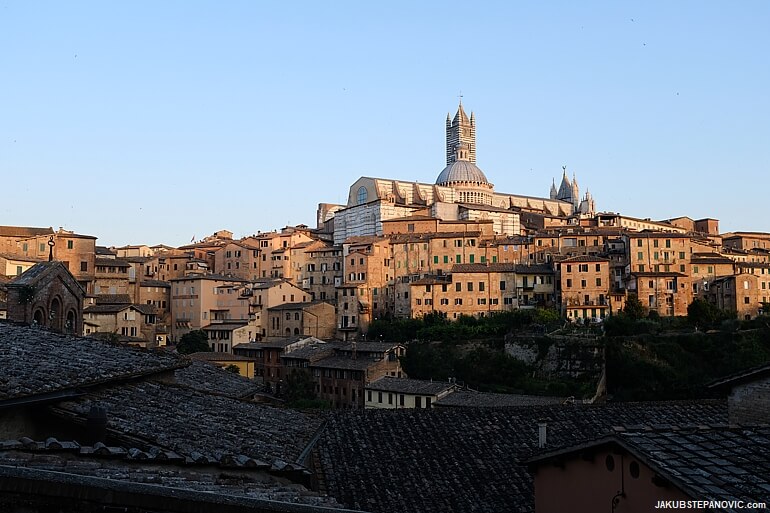 Experiencing a mind-blowing horse race in an Italian city that was in my bucket list for years.

Fast forward, when I planned this summer and realized that I could fit it into my schedule, it was a clear deal. "This is happening!" So, a few weeks later, on the Palio date, my friend and I were sitting on a morning train arriving in Siena, wondering what will we see here. We got rid of backpacks first, and then we went up to the city. Our first stop was the Fortezza Medicea, a fort from the 16th century, converted into a public park for over 100 years now. It offers a nice view of the surroundings. 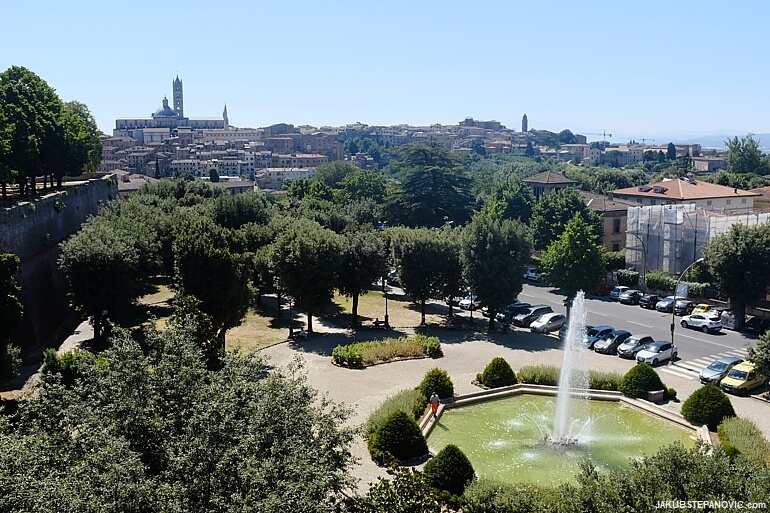 Then, we sat off to see the tangled streets of the old town. 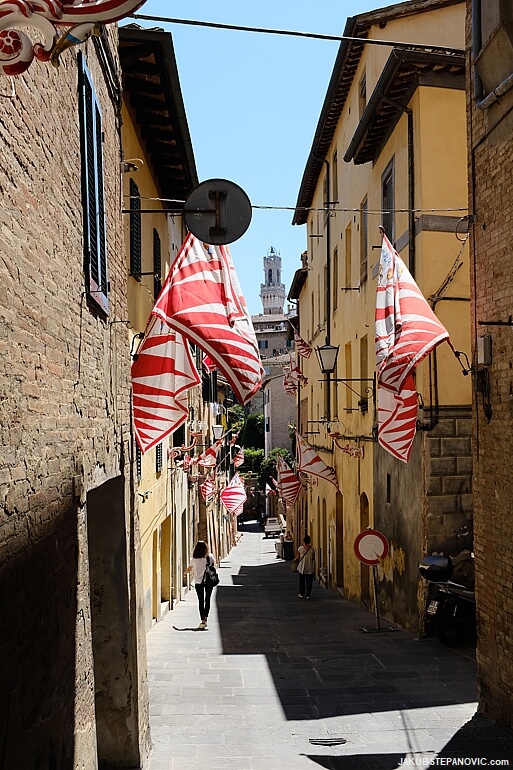 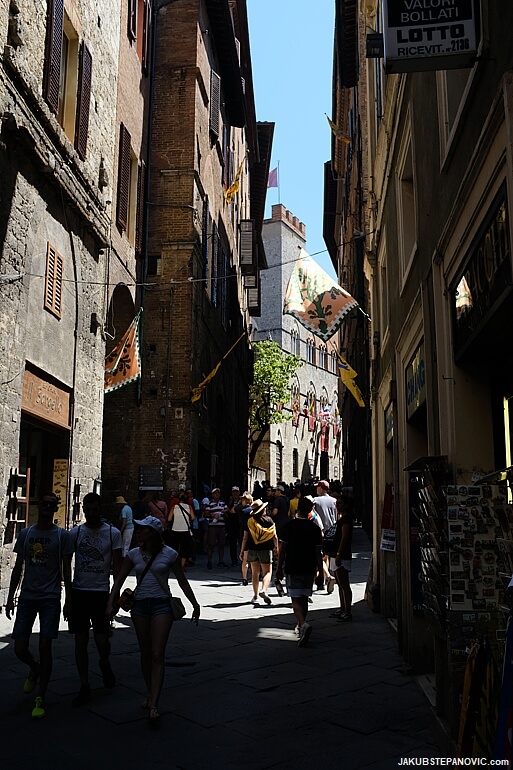 They are atmospheric and properly beautiful. What surprised me, if it wouldn't be flags of the city's districts hung around, one could easily forget that today is the day of the Palio. 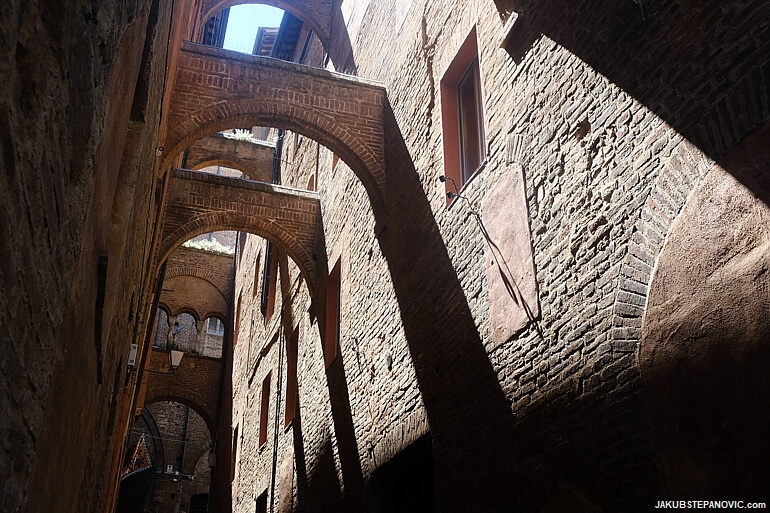 Eventually, we made it to a must-see point in Siena, the local Duomo. 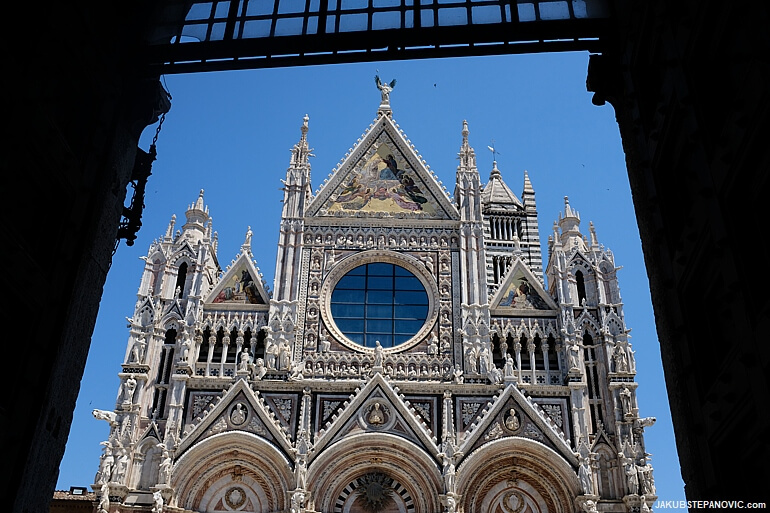 I read a lot of praise about this structure, and indeed, it delivers. Inside and out, one could admire all the details for months. 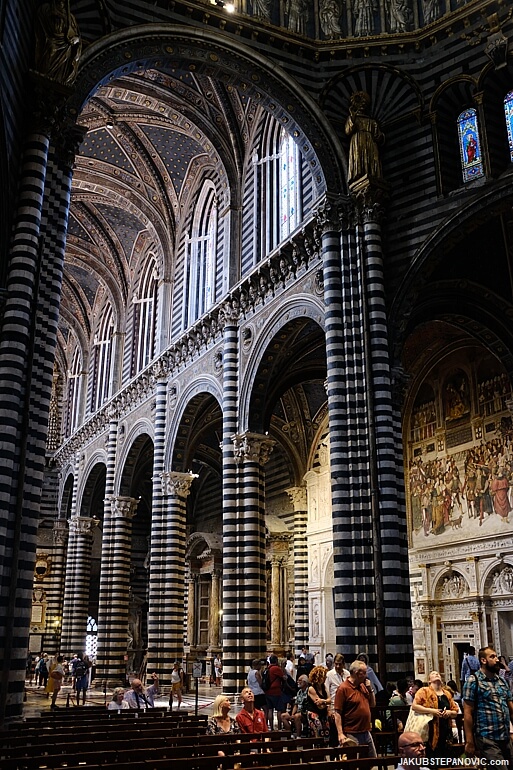 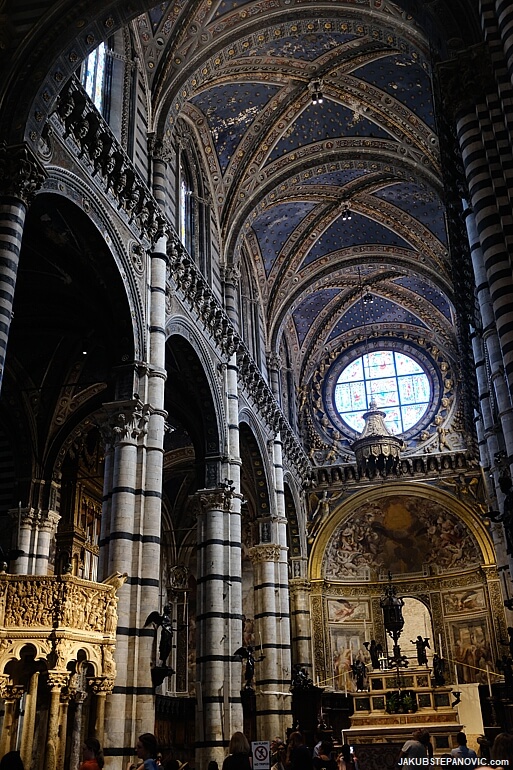 A feast for the eyes and mind, for sure. But as the human body needs more than that, we went to get some food, too. We scored a good restaurant, where we sat at a table with an Italian couple, who shared a few stories and some of their plates. After the meal, we stopped by the Basilica of San Francesco, another stunning temple. 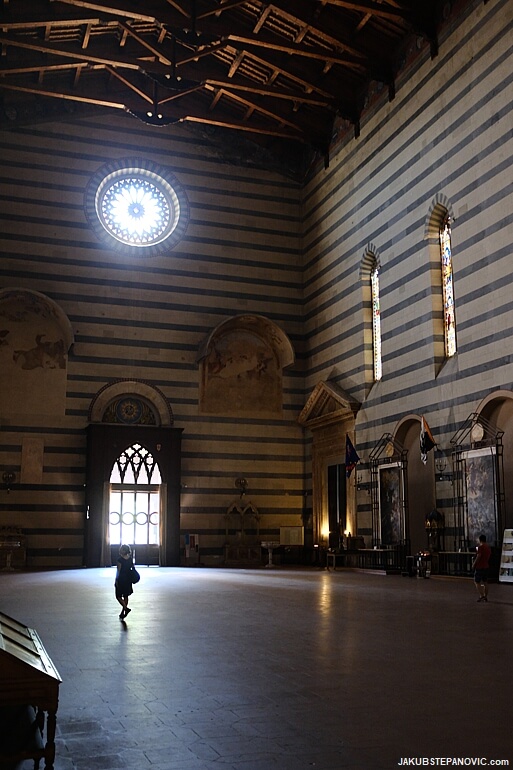 Continuing with the stroll through the old town, suddenly, an approaching drumroll broke the quiet time of siesta. Festival mood, here we go! Sure enough, in a moment, a parade representing a specific city district came to us. 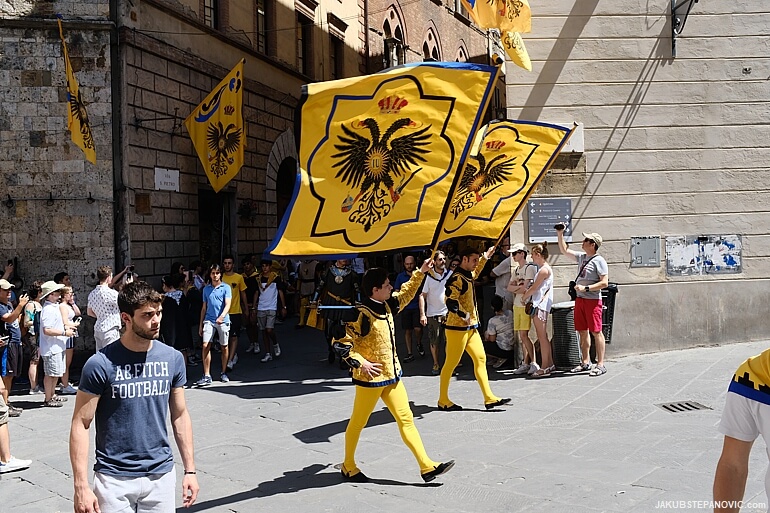 They stopped right next to us and performed a synchronized dance with the flags, which they threw in the air and then caught them in respectable positions. The sun boiled all in its way, but no bother; the show's fabulous. 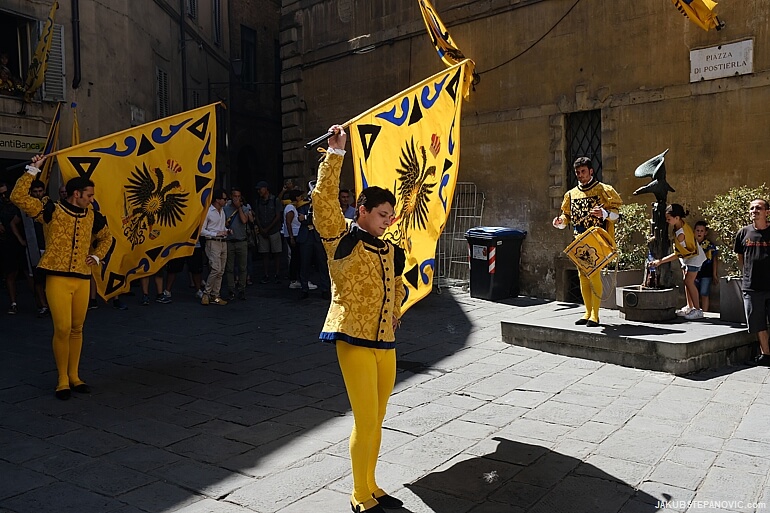 Just as they finished, another parade came, representing a different part of the city. A children's choir followed it, and before they passed, the third parade was approaching. 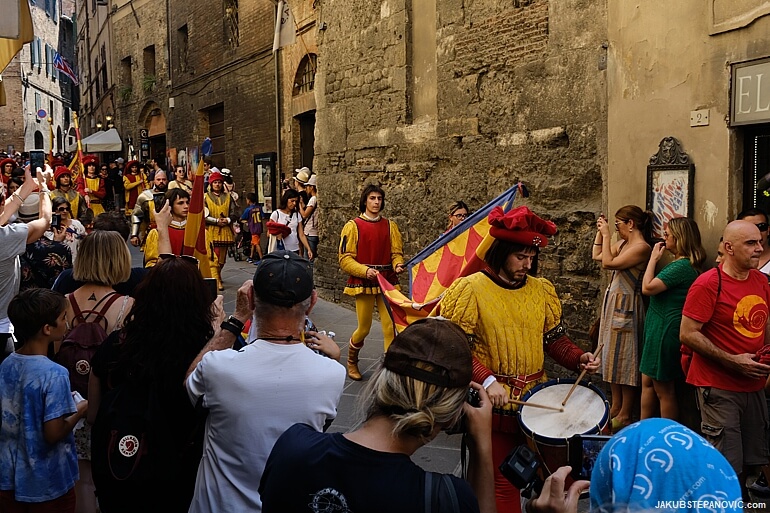 Suddenly, the place crowded beyond belief. Suddenly, the atmosphere of the city transformed. From now on, one could not be mistaken: It's Palio day. 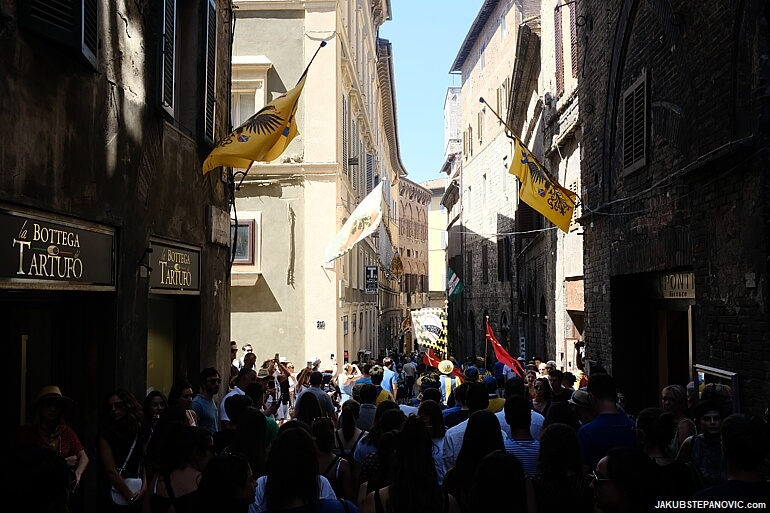 Right on, it was the time. While it was still some four hours to the race, we went to Siena's main square, Piazza del Campo, where the race takes place, to claim our spot. 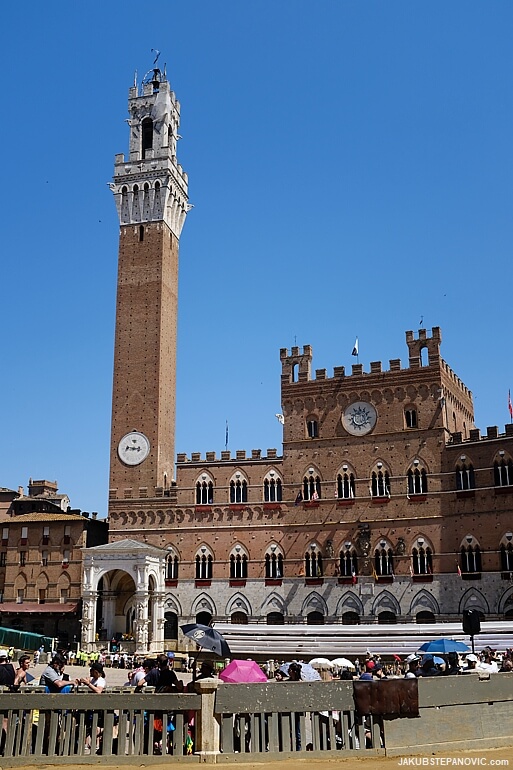 The shell-shaped square has the racecourse on its perimeter, covered by a layer of hard-packed dirt. On the outer side are wooden tribunes, which require expensive/hard to get tickets, but the inner square is accessible free of charge. That's where we went. 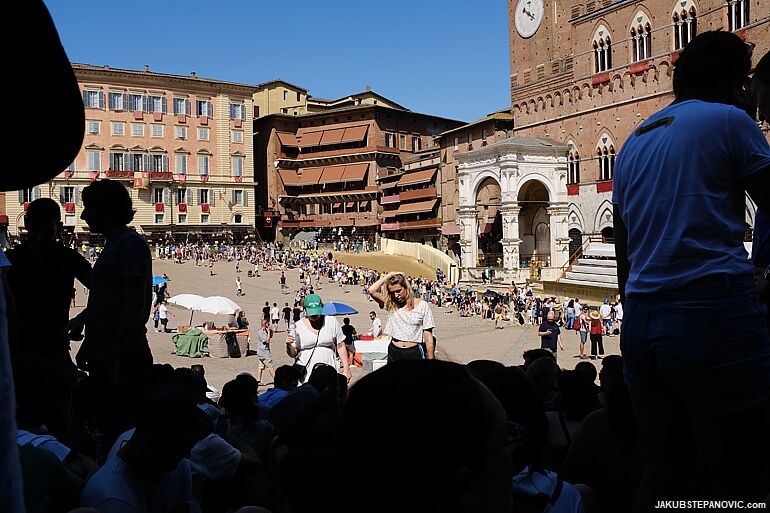 The timing was just right. Although we were far from being first there, we still scored a prime place: having a fab view while being in the shade.

At 3.30 p.m., a cannon placed in the corner of the square fired up, scaring away all the pigeons and inviting more people to come. Indeed, they are arriving in masses. At 4 p.m., another round from the cannon. There were no pigeons to fly up, but the heart rate of the crowds did. We were in the shade, but many people stood in direct sunlight. It is 36c/97f. "Dear me, that is some dedication," I thought. Carabinieri (Italian gendarmery) with a guard dog passed by searching for suspicious substances while local first responders prepared for what seemed inevitable, stocking defibrillators, gallons of water and stretchers.

4:40 p.m., another gunshot. People stood everywhere but the very centre of the square. I typed these notes, but I struggled to cope in this heat when the bystanders lit up cigarettes. The historic pageant began at 5 p.m. It commenced with a group of Carabinieri performing a formation on horses and followed by a presentation of the city districts. Flag bearers, knights, and racehorses walked the circle. 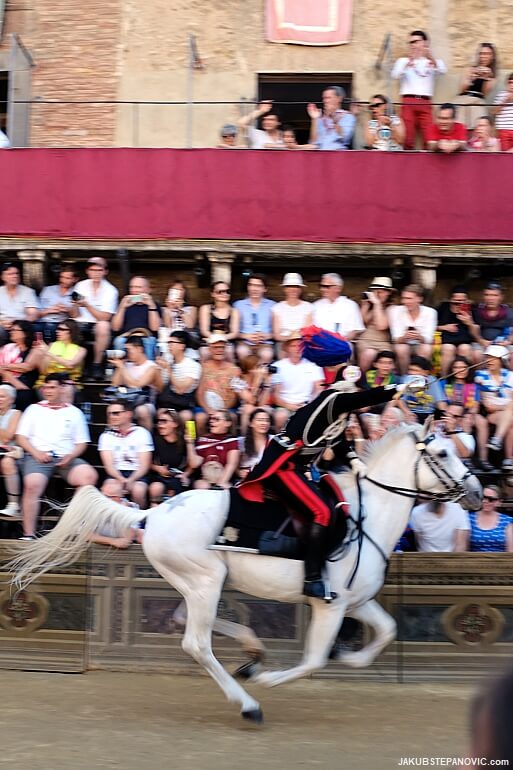 By this time, the piazza was packed. Not just the ground, all the windows of the buildings surrounding the square and some roofs were full of people too. Later, I read in a local paper that there were around 35 thousand spectators, and I believe that.

In front of us were several professional photographers, having kilos of camera equipment on each shoulder. They captured every member of the parade at 12 clicks per second, which was nothing compared to the beat of the drummers in the parade. Seeing the photographers brought me an interesting feeling, as it used to be my day job not too long ago. 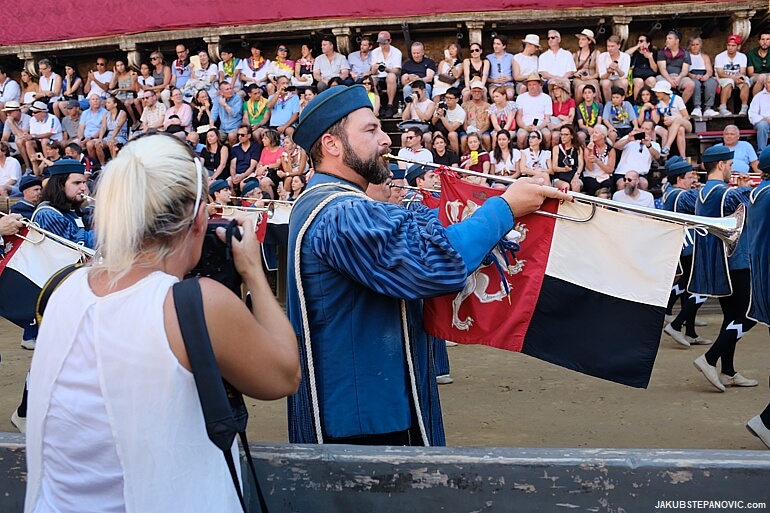 It is a very different mindset when one's job is to take photos: You have to predict things and always be aware of what's happening around you. It is exciting in a way, but you can't take a break - what if something happened at that time? You have to prepare for what's coming instead of just "taking it as it goes." Well, and today, I was glad that I could just let the atmosphere soak in rather than be on assignment for good shots. Fun, no pressure. 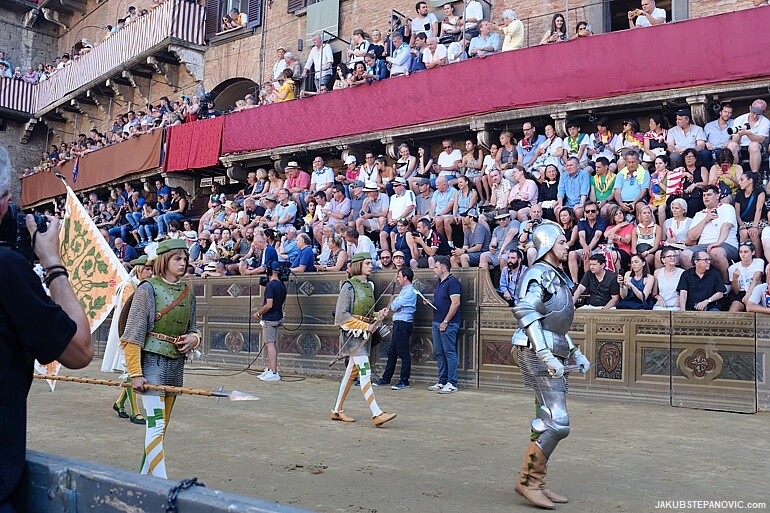 However, the enjoyment of the visually rich ceremony got somewhat stained as I couldn't overhear a group of Americans standing next to us. They constantly complained: "The music they play is repetitive, it's the same shit, again and again, I get it!" One of the ladies from the group uttered. It made me recall my days in photojournalism again, as in every high school game I covered in the States, the schools' bands performed the same songs. But I didn't hear anyone complaining back then. Then the group continued: "It takes too long!" And I thought that, given that there was a detailed schedule stating the duration of the celebrations issued beforehand, complaining about it is like a person would go to a soccer game and get upset that it is 90 minutes. Oh uh.

Suddenly, a girl nearby passed out, having her face the same colour as the grey pavement. The crowd made space as the emergency personnel came to take care of her. When they left, two of the US women used the situation to skip ahead and steal the good positions we had. I was annoyed, but wrestling old, sweaty.. um.. ladies was not something I wanted to spend the rest of the day. I was glad that I lived in the US, so I knew that the US people we run into here today weren't good ambassadors of the country. But it made me think how all tourists represent their country/continent/culture, whether they want or not. Anyway. I tried to isolate myself from the crowd nearby and focus on the whole atmosphere instead. 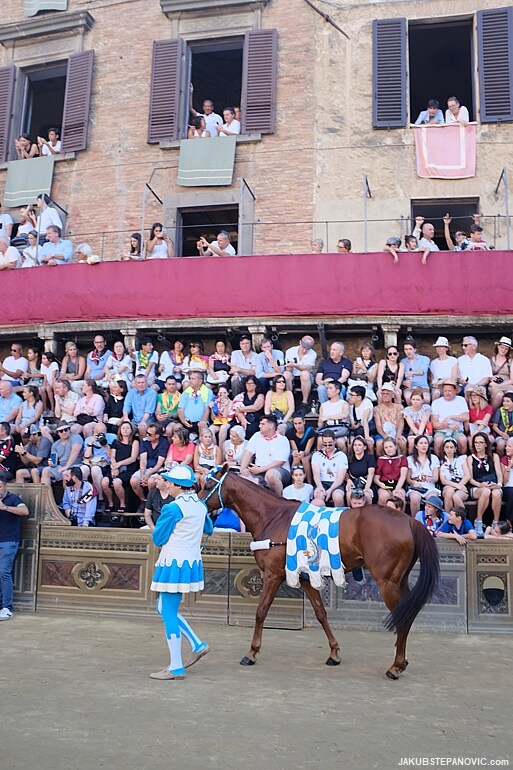 The parade soon presented a carriage with city officials pulled by mighty oxen, then all the flag holders did a final performance, and the course got cleared for the race. The schedule was planned right, as it was just the moment when the entire square's surface was in the shade. It forms a far better environment for the racers.

The racers arrived in no time, and the crowd went quiet. Tension started rising. Some of the horses were a bit nervous, so it took a while to get them all sorted and lined up at the start. Then, "bang," and they were off. The horses started flying forward, and the entire square started shouting, cheering for their favourite. Oh, my, goodness! The atmosphere was electrifying beyond words. Wham! The first lap was done. I heard that the race is an exciting experience, and I was looking forward to it. But I had no idea. The thrill in the air was insane! As the horses entered the section in front of the city hall, I captured the only pic I took during the race: 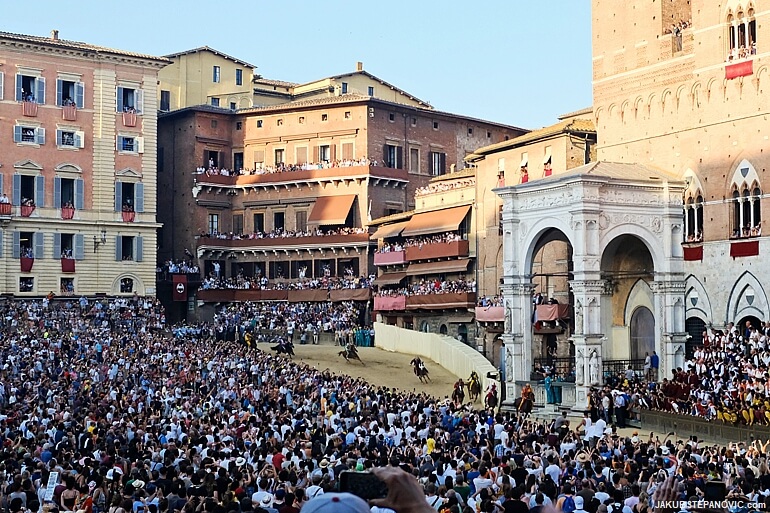 Wham! a moment later, they rushed past me, finishing the second lap. Everyone around screamed and/or waved flags as the racers entered the final straight. There, Giovanni Atzeni, riding for the city quarter Giraffa, caught up with the leading racer, representing the Chiocciola quarter. Head-to-head finish and the Giraffa took the narrow win. Holy Molly, mind-blown!

The actual race took just over a minute, and just as the last horse passed the finish line, the barriers got lifted, allowing the racecourse to be flooded by people celebrating the event. Meanwhile, the setting sun coloured the city hall tower in a golden light. 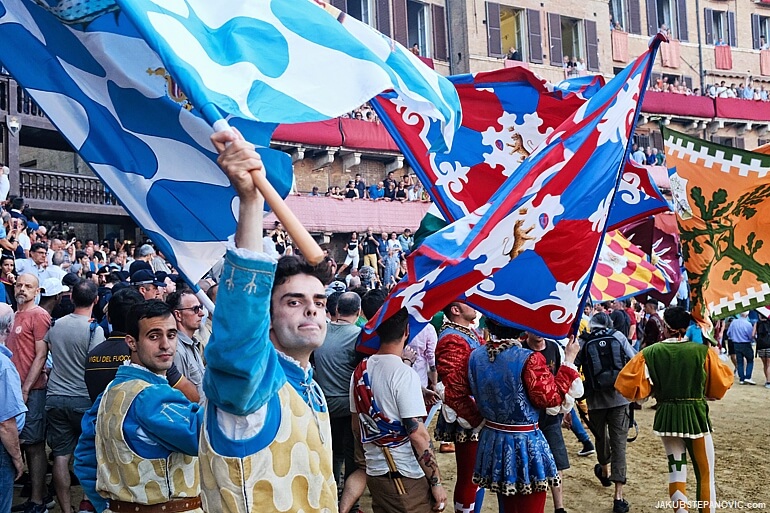 About half an hour earlier, surrounded by the whining people in that boiling weather, I questioned whether it was worthy to come to Siena today. Oh! I was so glad I did now. I couldn't recall experiencing anything with a similar atmosphere as the race had. Fantastic!

Smiling, we took my time. No desire to be squashed at the gates as the crowd was leaving. "What an event!" I thought. Later, we took a walk through the old town once more, catching the city in glorious light. 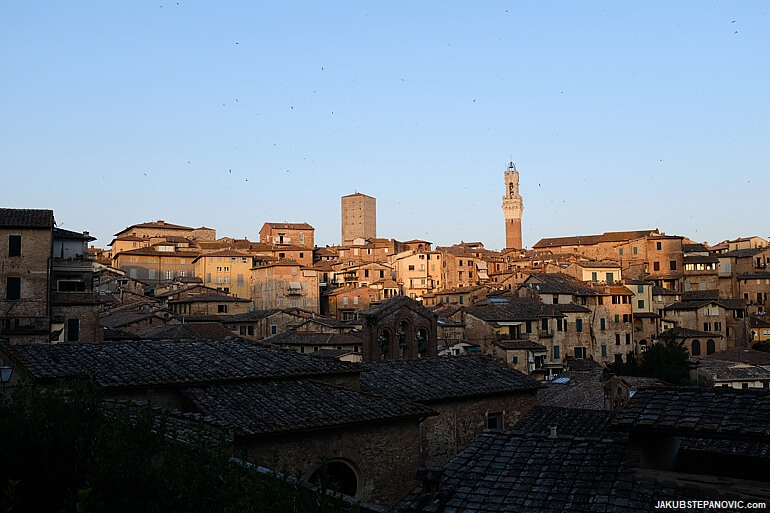 Not that I would lack endorphins at this point, but one cannot go wrong with Italian ice cream. Pushing the happiness into an overdose, "What a day!" I thought.

Thanks for reading! If you enjoyed this article, see my Blog Archives for more posts.