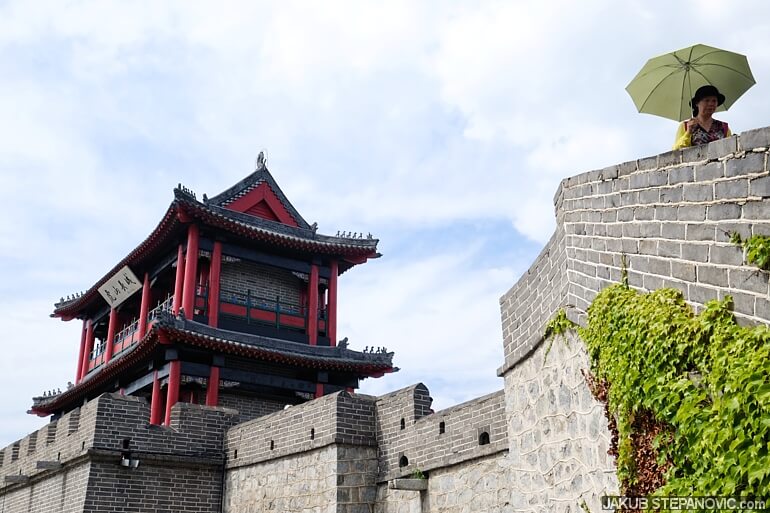 A day trip to the Great Wall of China and the North Korean frontier.
Being in China, of course, I wanted to visit the wall. My initial plan was to see it near Beijing; however, that's the same idea of pretty much everyone who's visiting the Chinese capital. So, while the wall's sections there are reportedly scenic and well preserved, they are also crowded beyond belief. A couple of my friends who went there spoke about massive queues and nightmare traffic, nothing to be keen to absolve. Thus, when I found out that the wall is also within reach from Shenyang, I went for it there. 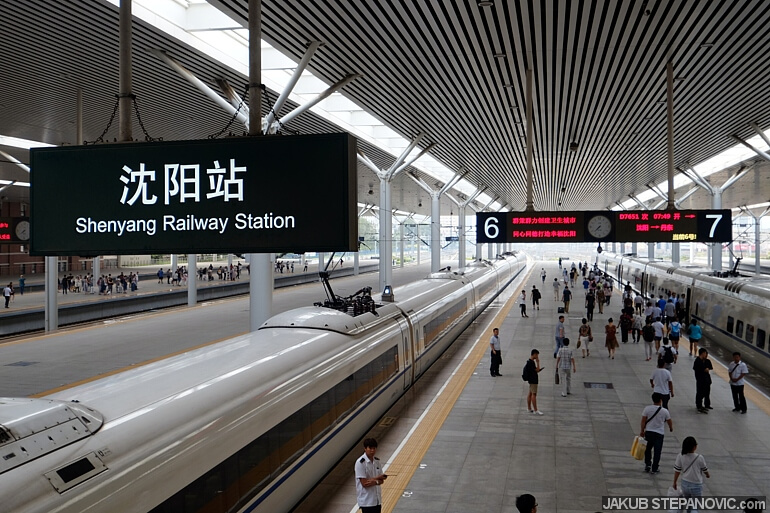 A convenient way from Shenyang to the wall is to take a bullet train to Dandong — the biggest Chinese border city.

The first sight outside the Dandong station is similar to many other Chinese cities: a massive statue of waving Mao Zedong greet the people together with plenty of concrete housing and office buildings all around. But things change quickly when you approach the Yalu River, as the water separates China from North Korea (NK). The embankment is patrolled by armed vehicles, and there are fences with signs asking obeying rules. Among the list of forbidden activities were expected things like "Do not use drones," but there were also items like "Do not throw objects to the NK." There were also pictograms prohibiting the use of any cameras; however, everyone around ignored that rule. For many Chinese tourists, Dandong offers the first (and sometimes the only) chance to have a glimpse into a foreign country, and so it became a popular destination for picture taking. It is not just the element of the border which attracts photographers to the river; there's also the city's most popular point of interest, a duo of iron bridges: 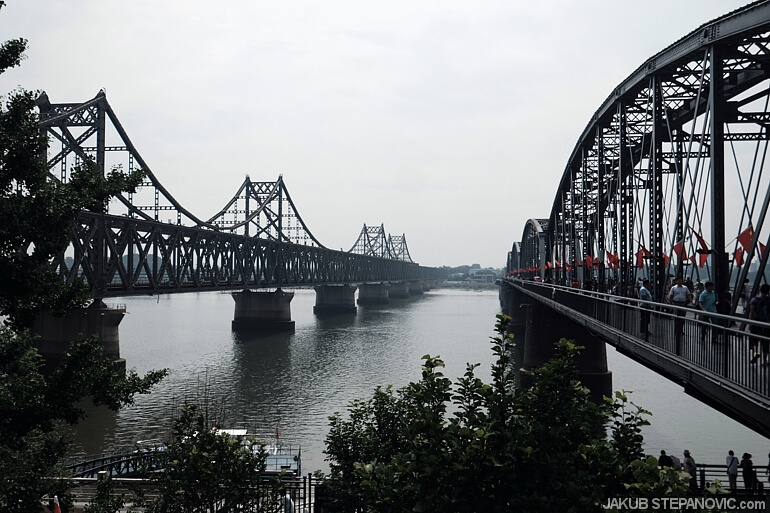 Of the two, only one connects both shores. It's because the Korean side of both bridges was bombed during the Korean War to cut out the Chinese supplies, and only the newer bridge got reconstructed. The old one was left with the damage and now serves as a cultural relic with some propagandist materials. 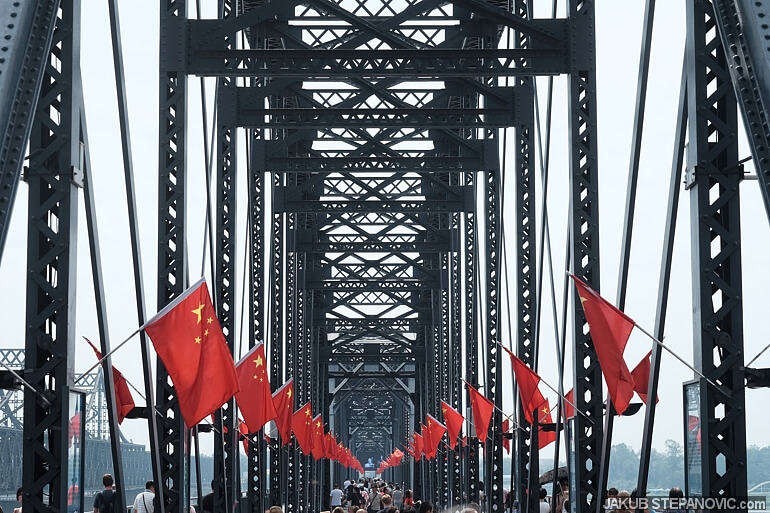 On its end, behind the damaged part, is an observation deck offering a view into NK. 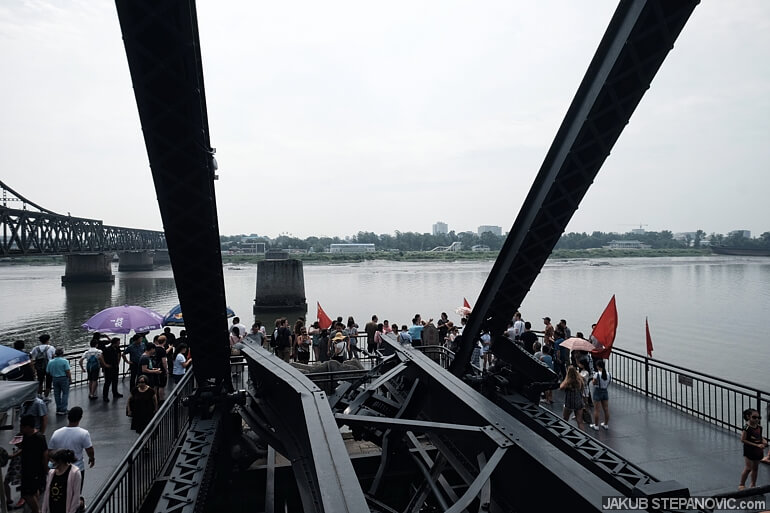 The iron construction is ripped apart like if it would be from paper. It is always impactful to see these reminders of wars.

While the bridge offers better a view to NK than the shore, all you can see there is a Ferris wheel, some buildings, and a few smokestacks. In my eyes, much more interesting was to look back at the Chinese riverfront with an array of high-rises... 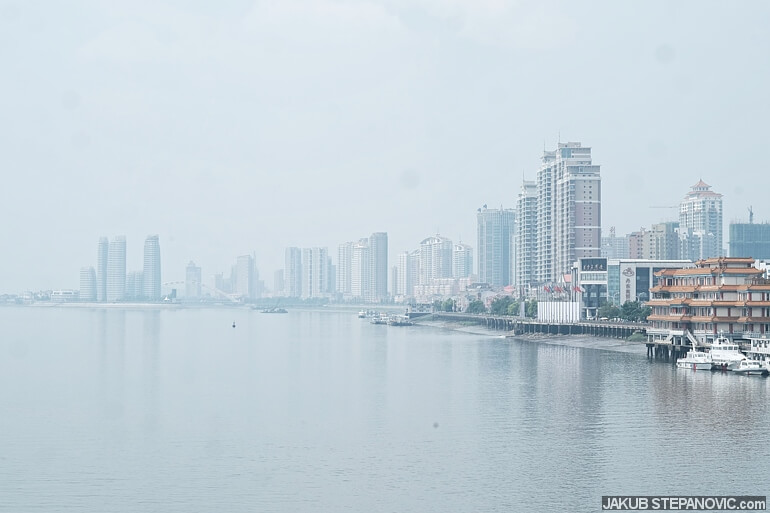 ...or to observe the newer bridge, and its continuous traffic: 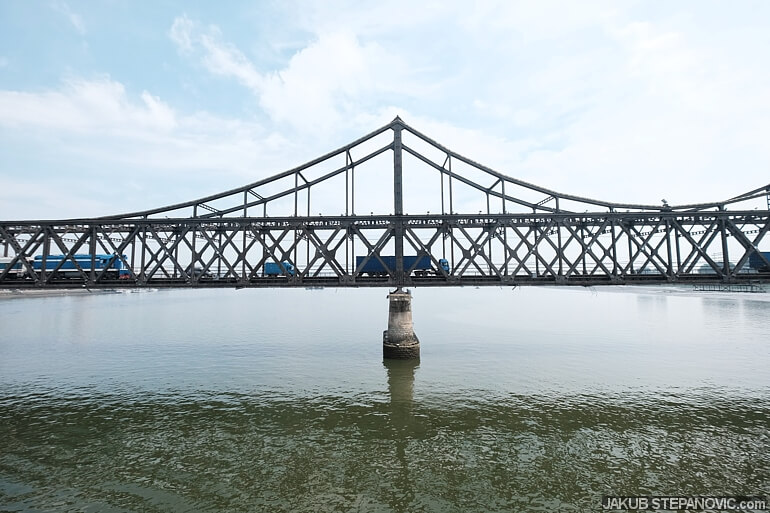 Around seventy percent of all North Korea's trade goes through this bridge.

It was interesting to find out about the city's significance, but it left me with a somewhat bitter mood. I spoke with a few locals, many of who were quick to point out how "China bravely aided NK to resist American aggression," and that "while the current NK program sucks, they are still better than the US." I get that the there is always another side to a story, but having learned who was the first to cross the enemy lines in 1950, it was hard to be positive about this narration. Twisting history by those in charge isn't anything new, but experiencing it first hand in this extent was new to me.

In the city, I learned that while most of the river is already Korean territory, the two countries have an agreement that allows both sides to use the water equally — as long as they don't step on the other's soil. This lets fishermen and freight boats to do their job without conflicts, and at the same time, it gives an opportunity to technically get into NK without visas. The local tourist agencies are doing a business out of this by providing boat tours. As I had the time and the distant NK landscape had some hills that could be interesting from up closer, this seemed a good option. 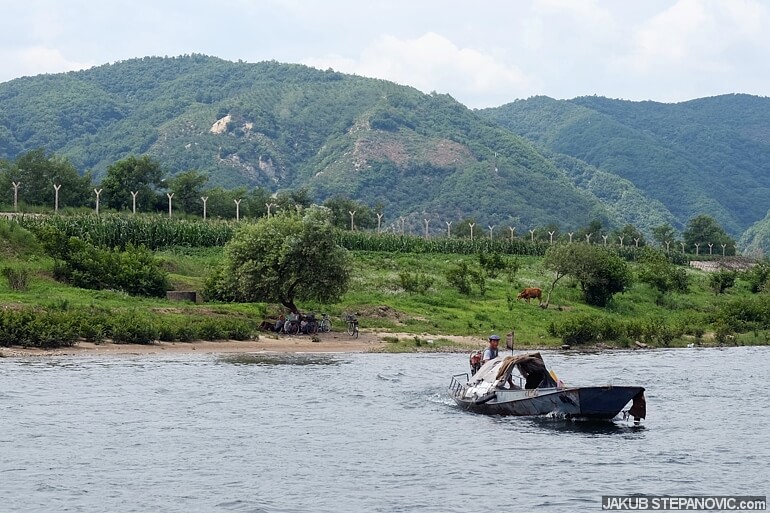 One of the fences at the North Korean border.

Once on the river, the boat went behind an NK island with a few watchtowers. The coastline had barbed fences and vast rural fields behind. Also, there were a couple of pretty hills. Sadly, the natural scenery got outweighed by the boat's cultural awkwardness. The tour guide was saying something in Chinese from a speaker, and the crowd laughed. It repeated a few times, so I asked around what he was talking about, and got surprised when it turned out to be a train of jokes about starvation and other poor living conditions in NK. Then, the first farmer on the North Korean land came in sight, and the crowd on our boat went crazy: shouting, gesticulating frantically, and taking tons of pictures. It was like on a safari where people start screaming after the first elephant appears, in the expectation that the poor animal will come closer; or, I don't know, perform a dance. I felt embarrassed and was glad when the boat turned around and headed back to the port.

It was time to move on to the main reason for this trip, the eastern tip of China's Great Wall. I was looking forward to walking on it and coming to other thoughts. 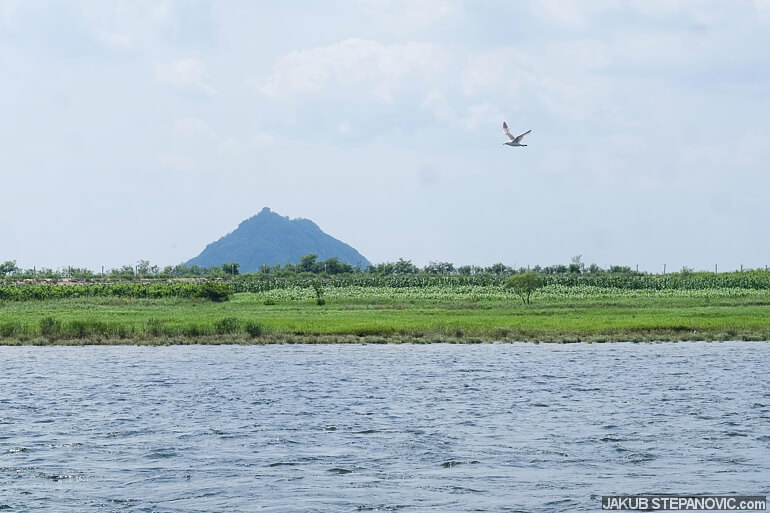 North Korean island in the foreground, Chinese Hushan mountain in the background. That's where the wall is.

The section of the Great Wall at the Hushan mountain was built during the Ming Dynasty, and the accessible part is about a mile long. 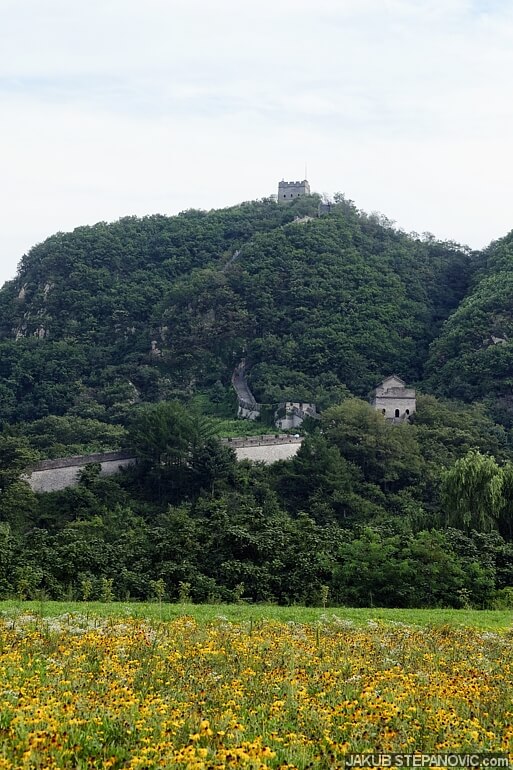 Nevermind the overcast skies, what an exciting thing! 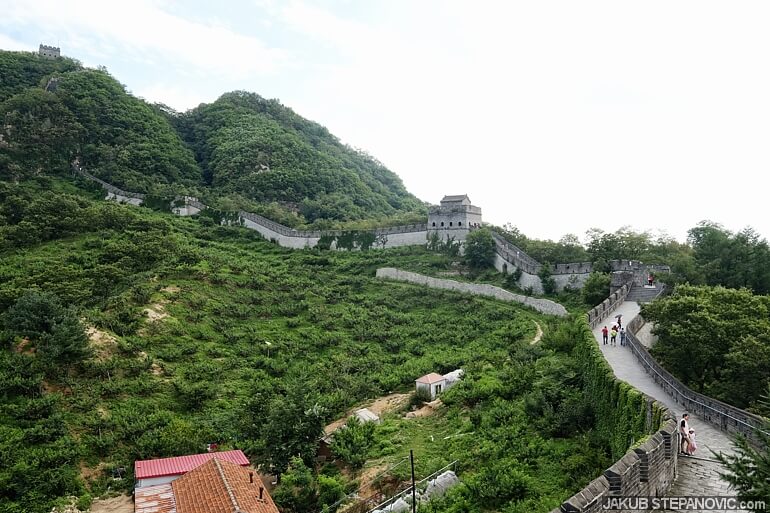 The wall climbs steeply up the hill, where was a lovely outlook on the surroundings: 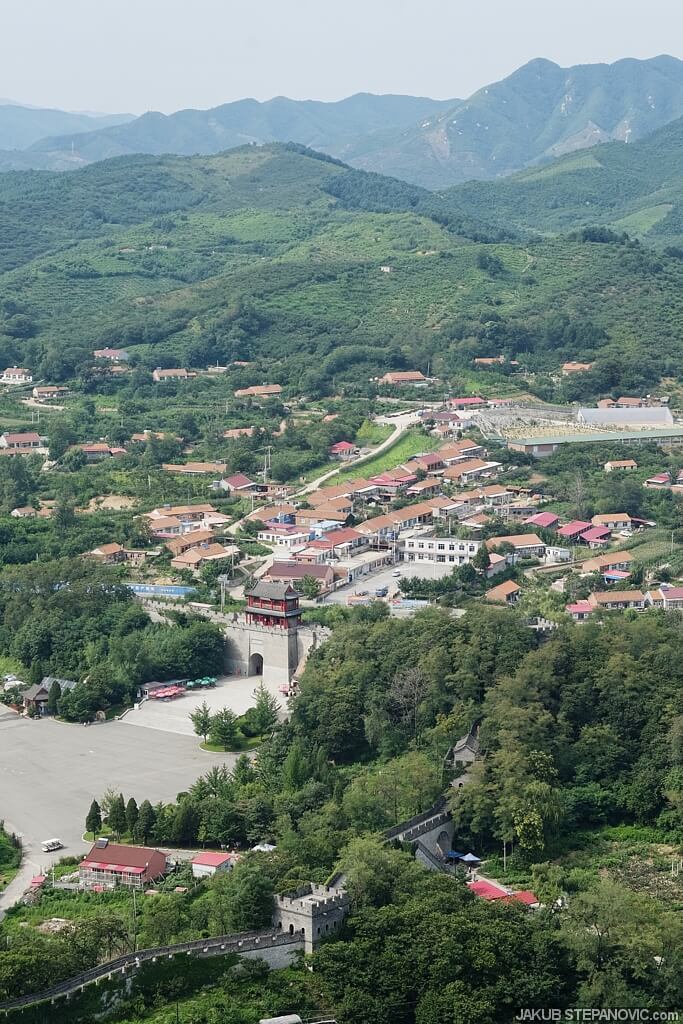 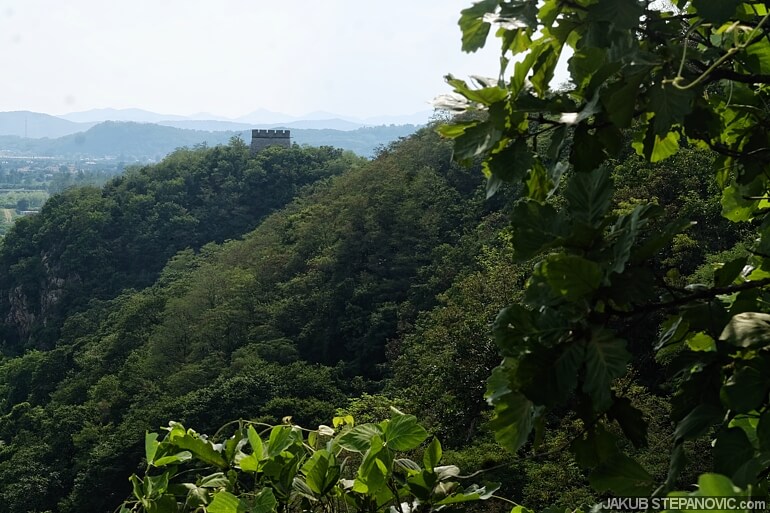 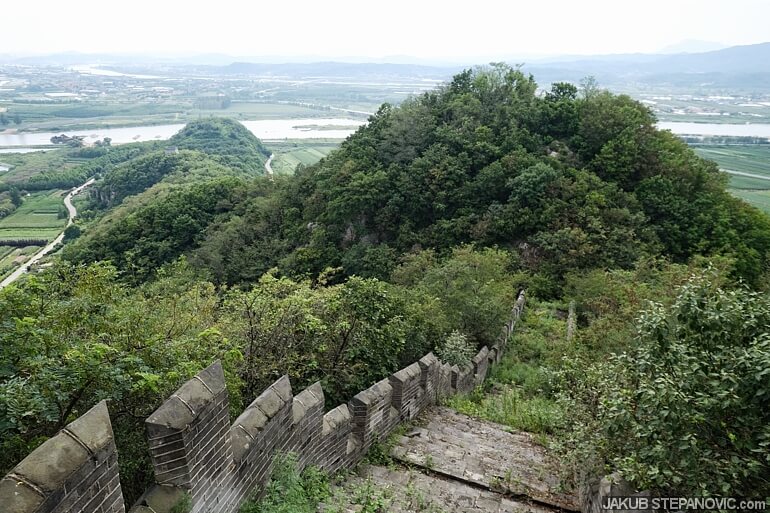 At the end of the section, you can choose whether to return the same way or by a tad adventurous path following the water. I went for the second. 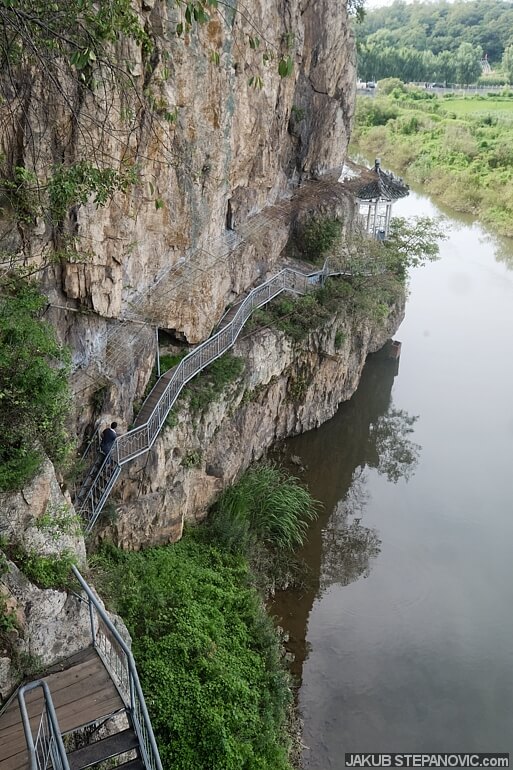 Once back in front of the entrance gate, I started my return to Shenyang. The journey went quickly, I had a window seat, and the track offers some nice views on the countryside... 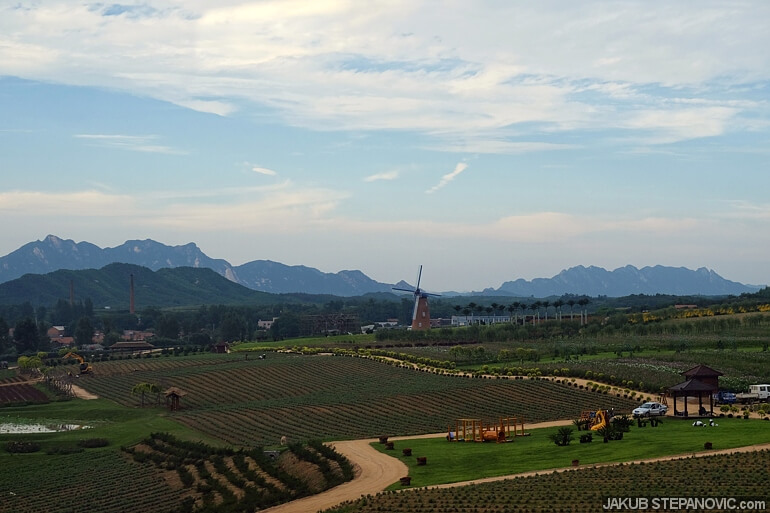 ...and abundant industrial facilities, notorious for northeast China as a contrast. 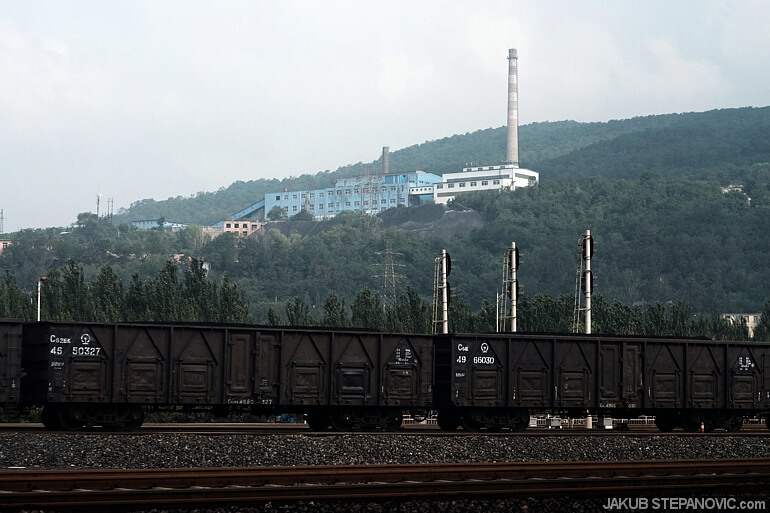 Thanks for reading. If you liked this article, you might also like some of my other posts about China, or other countries and topics that you can find in my blog archives.