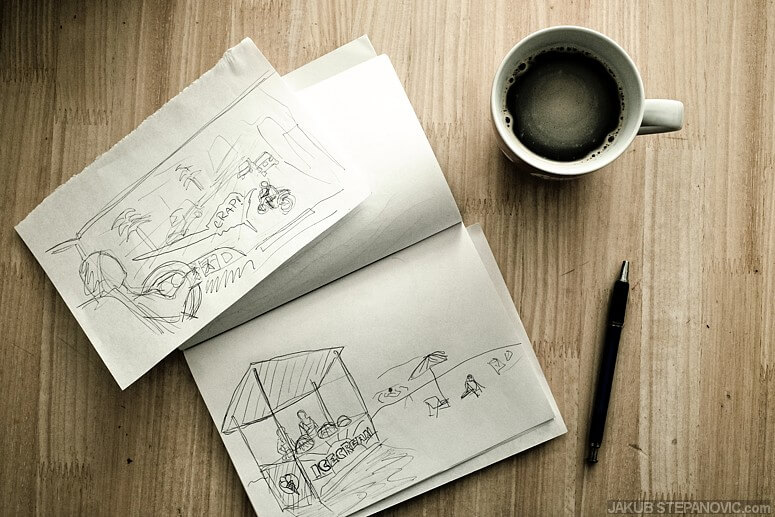 Accidents, fires, explosions. Since I left my job in a newsroom, these are no longer part of my daily life. Or are they?

Well, sort of. Ever since I started covering hard news, I've had many vivid dreams with some action in it. Twice, I even dreamt about something that was just to happen. Once I had a dream that I was in my bed, and I received a call that a car had crashed into a house. I woke up, checked my phone to find nothing. However, maybe 10 minutes later, a police scanner in my room started beeping an emergency code, followed by a message that a truck rammed through a house. No joke. The other time I dreamed about a car skidding off the road to a lake. I woke up and, in a couple of minutes, got a message that a semi-truck just went off the highway into a river. But most of the dreams with these topics are just like fiction movies, and I tend to forget them within minutes after I wake up.

I had another one today, and this time I decided to capture it before it disappears. Also, I haven't drawn anything in ages and this was a good reason to sketch some illustrations to accompany it.

As in every dream, there was some beginning I can’t recollect, perhaps because it wasn’t important. So, from the point I can recall: I was in the city where I grew up, telling a friend from my elementary school that "I need to get out, to take control of my life again." Then, the events of the day started to occur. I was on a sunny beach in southern California with a group of people I didn't know. 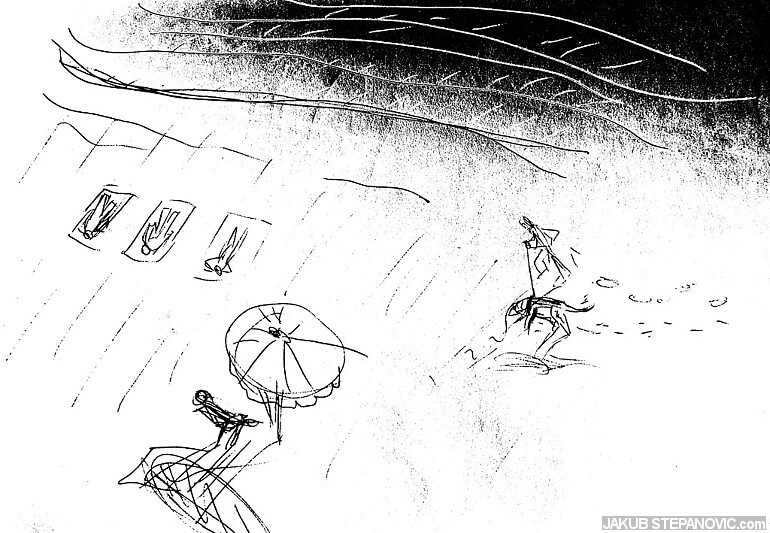 Funny how I can't recall things like how I got there or what was the group around me about, but I do remember all the details of the place. There was a big indoor swimming pool, a street across the beach, which was much more crowded than the beach itself. Or, that there was an ice cream booth on the scene... 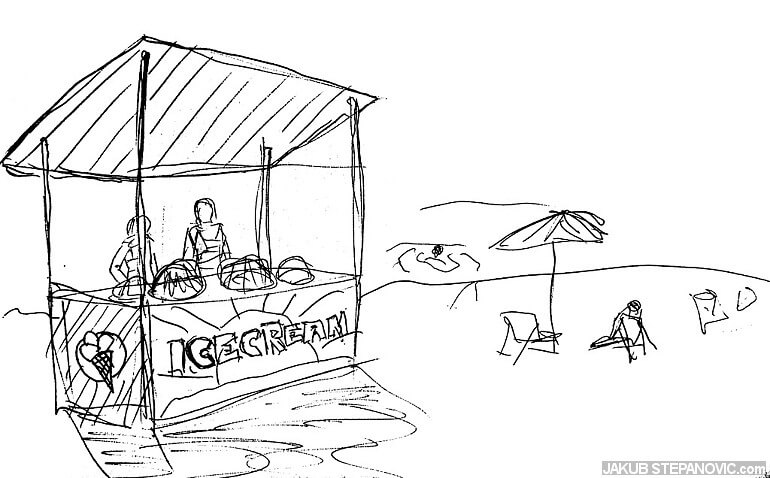 ...where I was about to get something, but an older guy with a fancy Leica around his neck got there before me and started to tell his story about how good Sony’s SD memory cards are. I mean... what the.. 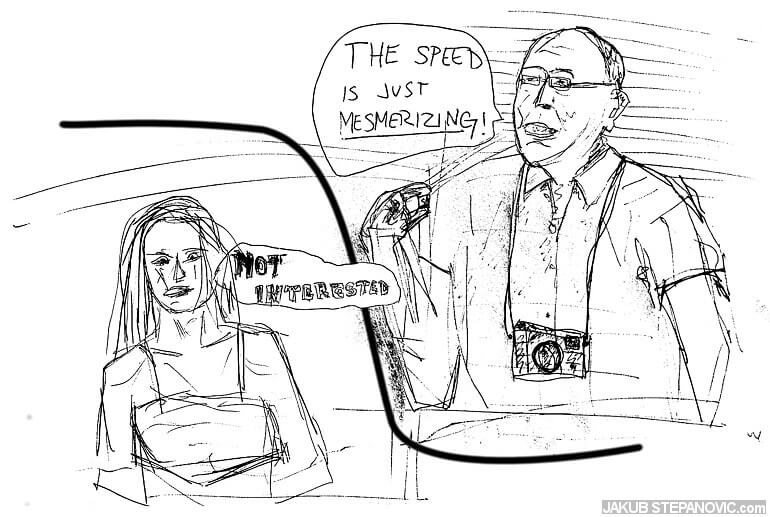 Well, anyway. After some time of strolling around, taking a few pictures, the group and I boarded a bus that was supposed to get us to another location. I guess it was a sightseeing trip then. I was sitting by myself in the first row, having a good view of the road lighten by the late afternoon sun. Getting through a city, suddenly it got dark outside. It felt odd - it wasn't sunset yet. It was like we entered some heavy, black cloud. Soon we joined a four-lane highway heading to the hills. Although still in the residential area, the surroundings got weirdly quiet. Every sense in my body seemed to work above the norm.

Out of nowhere, a guy on a scooter ran a stop sign, pulled straight in front of the coach. 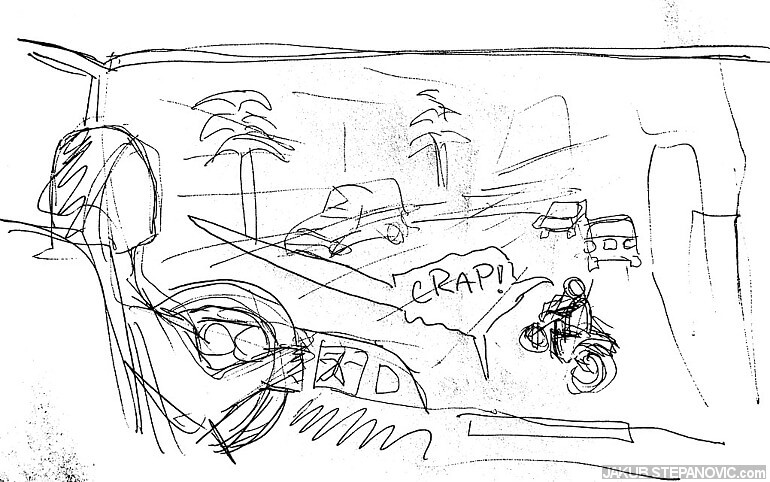 The bus driver smashed the brakes, but at the highway speed, we slammed into the biker in full power. Ahead of us, some woman drove a small suv, Suzuki sx4, I believe, but instead of maintaining her pace, she started braking too. The bus, still at a decent speed, turned to the sidewalk in a dodge maneuver attempt but took her bumper off the car. That's the moment our vehicle was out of control. We rolled off the road, smashed a couple of mailboxes and later slid back across the road in the opposite direction, scraping a side of a Range Rover and stopping a foot from a guy pushing a stroller. Oh, man.

The bus crew is shocked, but all right. While everyone still sits frozen, I'm getting out through the broken windshield and find myself in the middle of what appears like massive mayhem. It turns out the dark fog is smoke. The first level of a luxury hotel further down the street is fully engulfed in flames. Among many civilians all over, every once in a while, a firefighter runs across the scene. 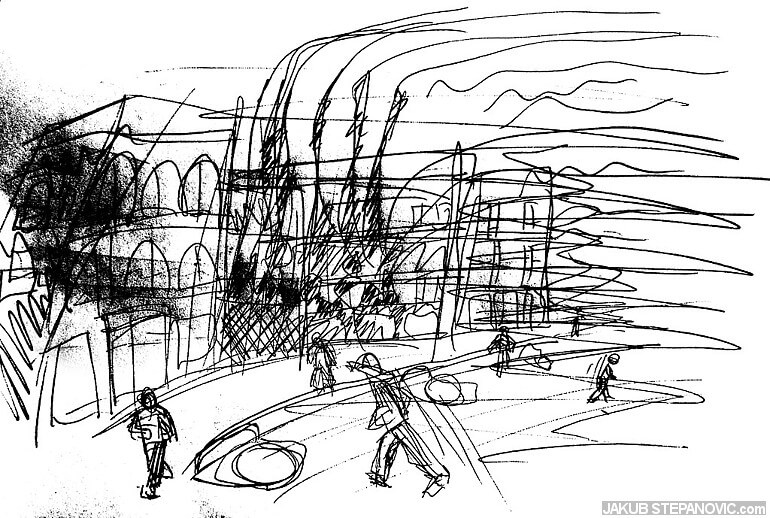 I orientate quickly and see that some of the high-dollar residences around are also damaged. What is going on? The police's nowhere to find. I am on my own, but know what to do. Having a camera in my hand, I begin to run towards the heat. This needs to be documented! But then, just as I got close enough (I had only a 35mm lens on me) and grabbed some compositions, I woke up.

Right. And how was your morning?