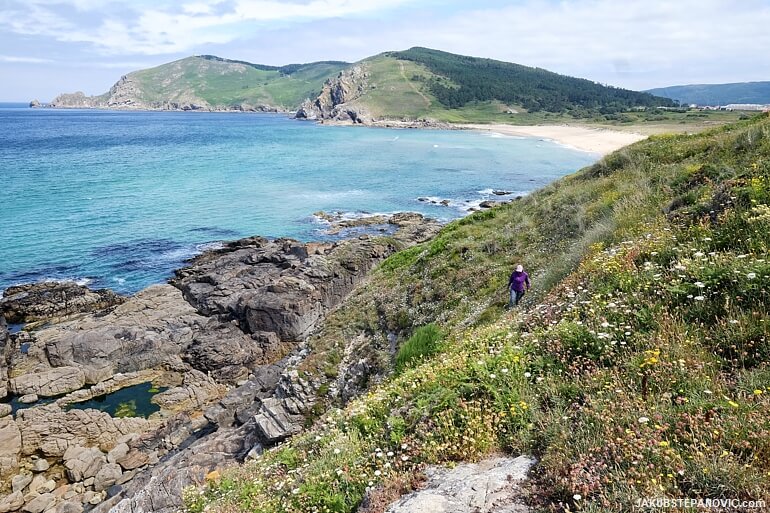 The End of the Land

Journey to the westernmost tip of continental Spain.

Once my friend and I reached the Santiago de Compostela within our Camino de Santiago pilgrimage, we decided to extend it further... 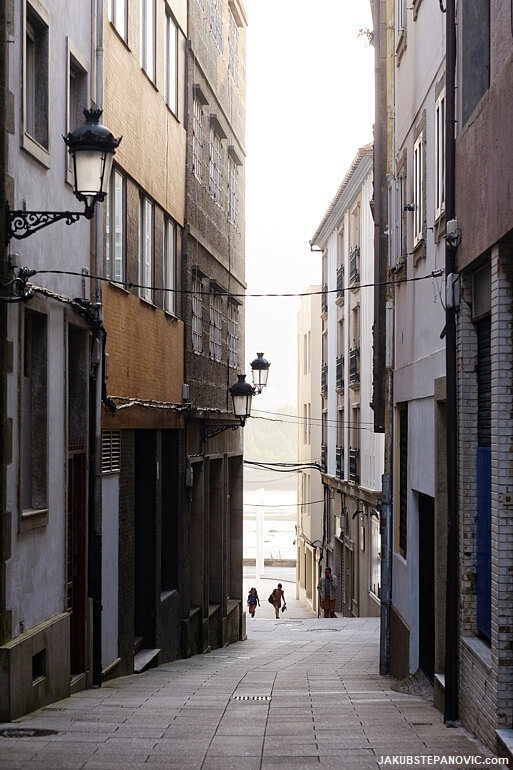 ..and we went to Cape Finisterre (from Latin Finis Terrae, meaning Land's End), a rocky peninsula on the Galicia's west coast. 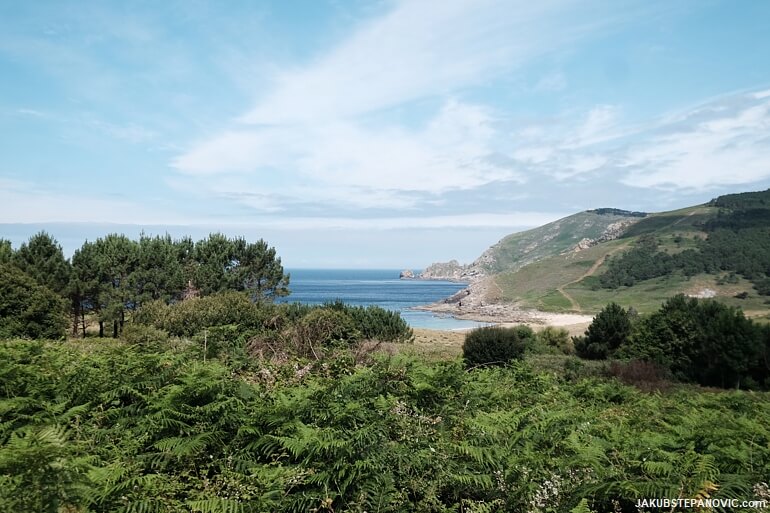 There is a paved road all the way to the tip of the peninsula, winding on the east, calm side. On the other side, the west shore is marked by raw, steep slopes, with only a few goat paths here and there. And that's the side we decided to stick to on our way. 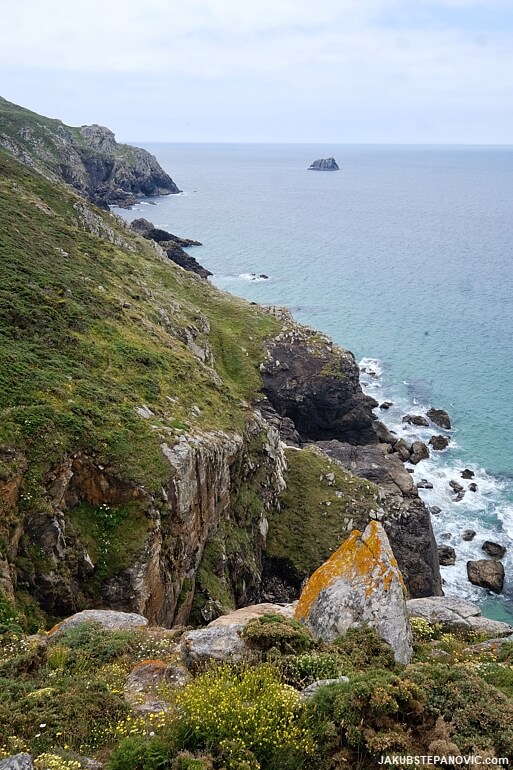 It was very scenic, wildflowers as far as one could see, with nobody around. Moreover, among these cliffs, we discovered a few tiny, enclosed sandy beaches. 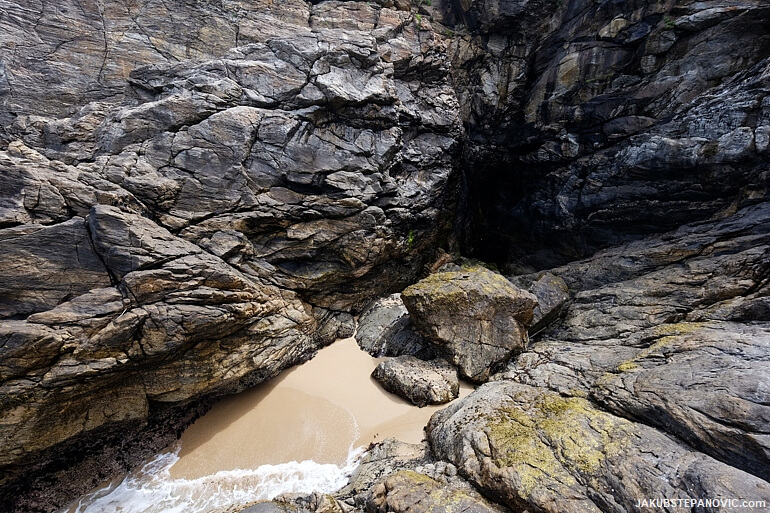 Which; of course, we made some use of. 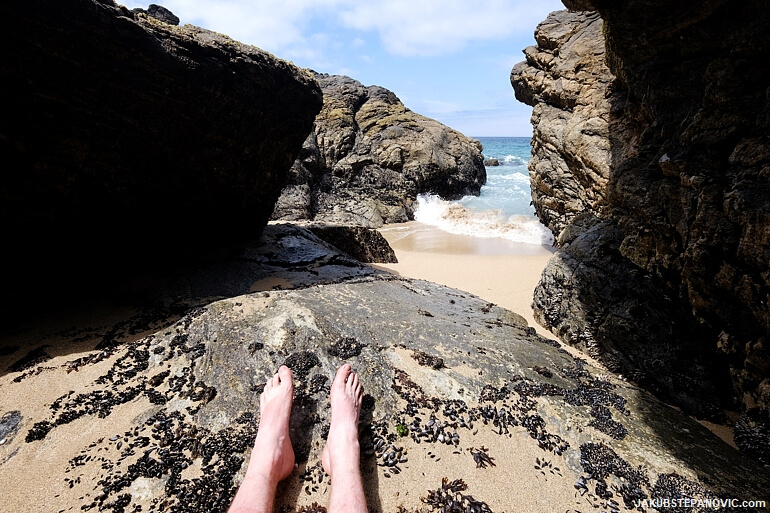 These cozy-sized spots hidden in such remoteness were genuinely appealing. And the walls of rocks that sheltered them were pretty amazing, too. 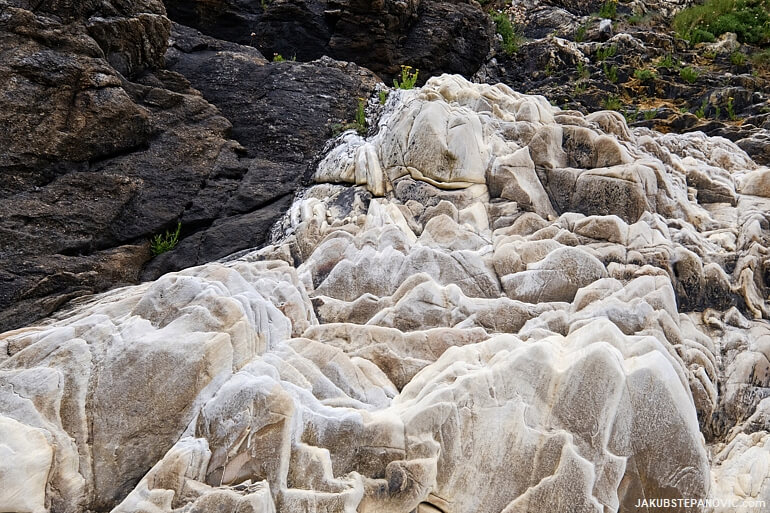 Layers upon layers, black sediments pierced by veins of white limestone.. This would awake the inner geologist in everyone.

Before we reached the end, the Sun got covered by clouds, and the ocean brought some fresh winds. The feel of the whole environment changed: the previously saturated colors faded, and so did the summer hotness. Also, those goat paths were suddenly a scarce commodity as well, so we had to march our way through fields of thorny reeds. But then the lighthouse - marking the tip of the peninsula - came in sight. Almost there. 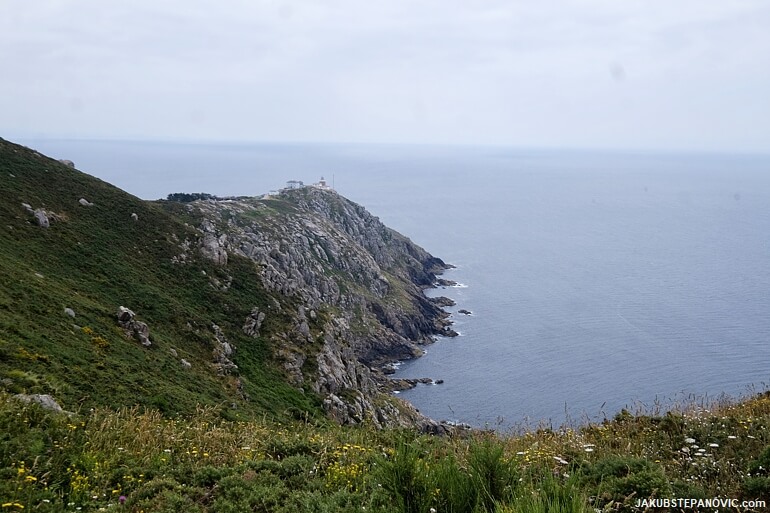 Behind the lighthouse, the peninsula sharply drops to the ocean. Standing there brings a similar feeling to being at the bridge of a massive cruise ship. Looking to the west, there's nothing besides the vast body of water, while on the east side, you can see the mainland in the background. That gives a scale to the distance and adds to the experience.

The idea of extending the Camino de Santiago pilgrimage all the way here is by no means original, loads of pilgrims do so. In fact, there was a hospital for pilgrims built here back in the 15th century already. 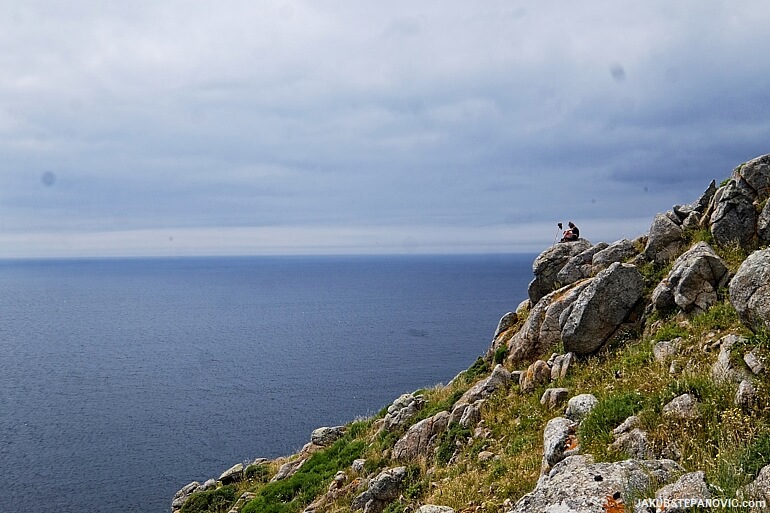 It was interesting to observe other people congratulating each other for the distance they walked and generally being in a cheerful mood. Less pleasant was a discovery that some of the pilgrims actually burn their shoes or other clothing pieces in which they walked in here. Honestly, I think it is stupid at best. I get all that "ending a life-phase, reborn in fire," ritual and whatnot, but in this day and age when pretty much all sporty clothes and shoes are made of plastic, burning them produces a nasty piece of melted junk, which is painfully ugly in a natural setting like this.

Oh well. After a deserved relaxation and recalling all the walking adventures we had over the last two weeks, we walked back, this time on the east side, on the road. It leads to the town of Fisterra. An ancient fishing settlement, a touristy resort nowadays. 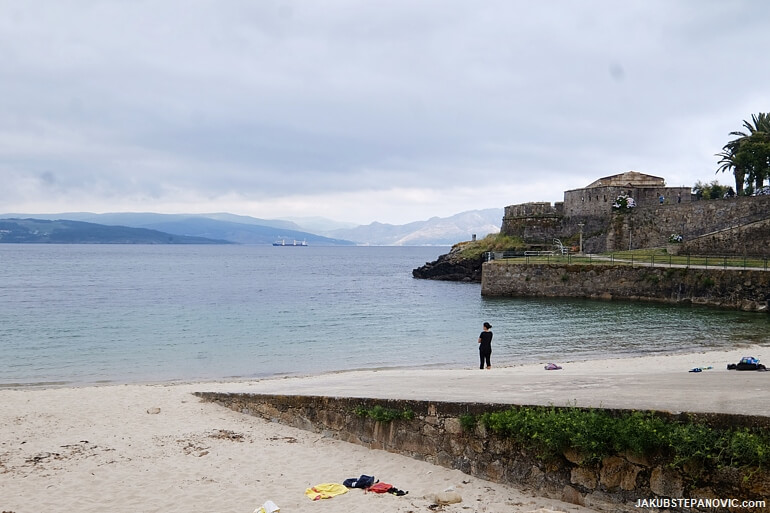 That's where we spent the night. 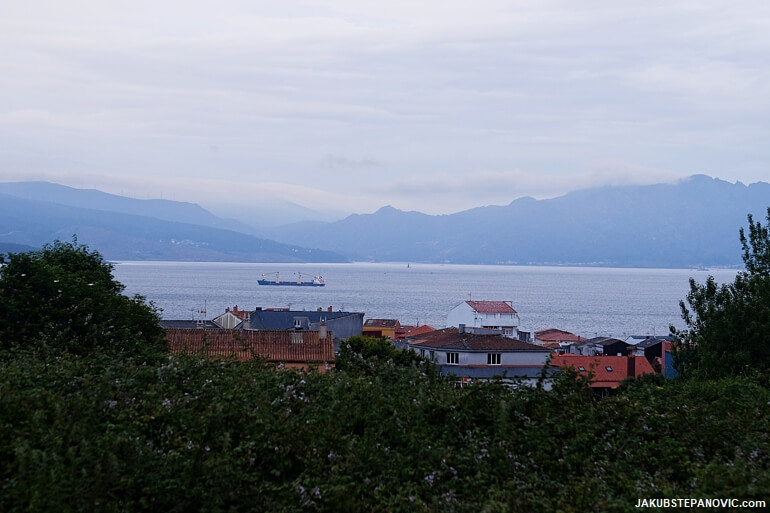 No matter the "end of the land" name, Cape Finisterre isn't the westernmost point of continental Spain. A small peninsula a bit further north, Cabo Tourinan, is. Having the time the following day, we went to check it out. 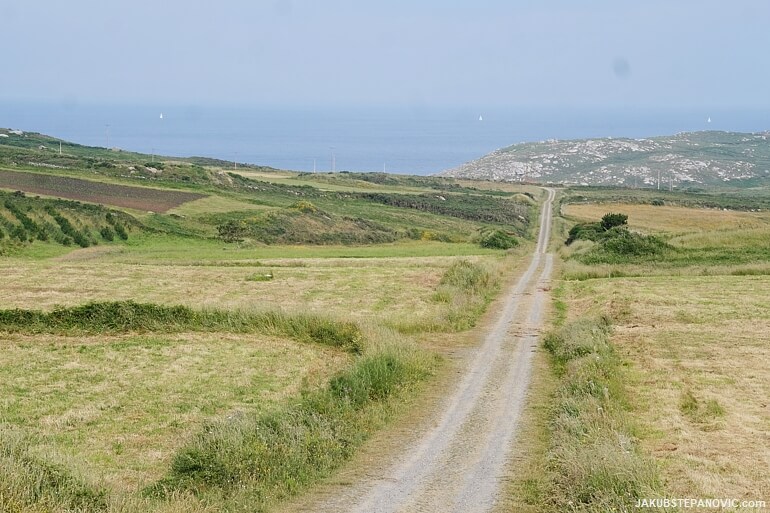 Cabo Tourinan is only a narrow piece of land that extends into the ocean, so it's not a challenge to make a loop all around it. At its end is, as usual, a lighthouse. 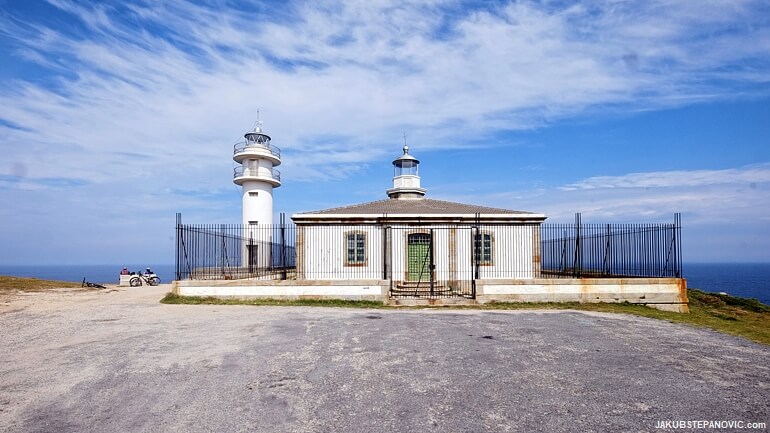 There's also a sign which says that, for some period of the year, this is the place which gets the last ray of sunlight on continental Europe.

When we were there, a thick fog started to creep in from the south. It was cool. 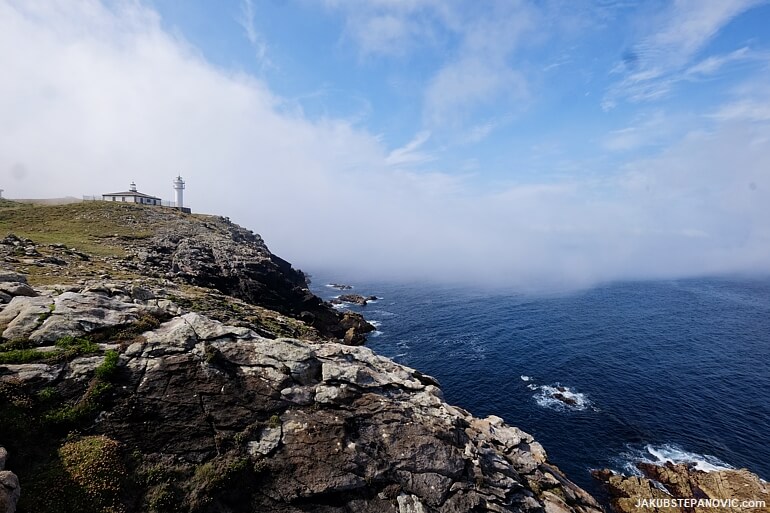 You could see how the mist cloud forms a wall and obscures everything in its way. 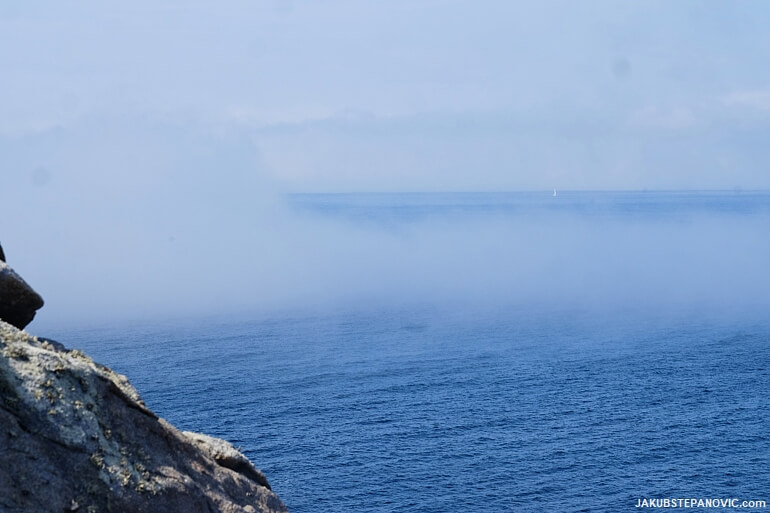 ...in a matter of minutes, the whole land was covered by this thick grayness, creating some proper Scottish vibes. 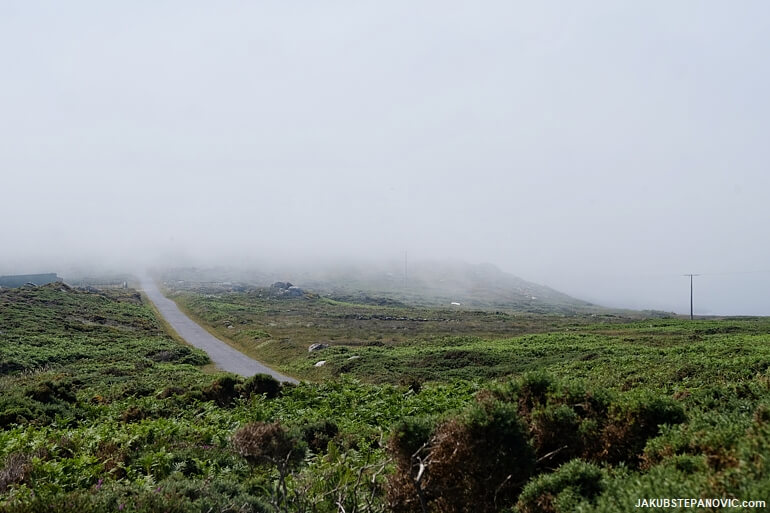 It was a neat way to say goodbye to the country.