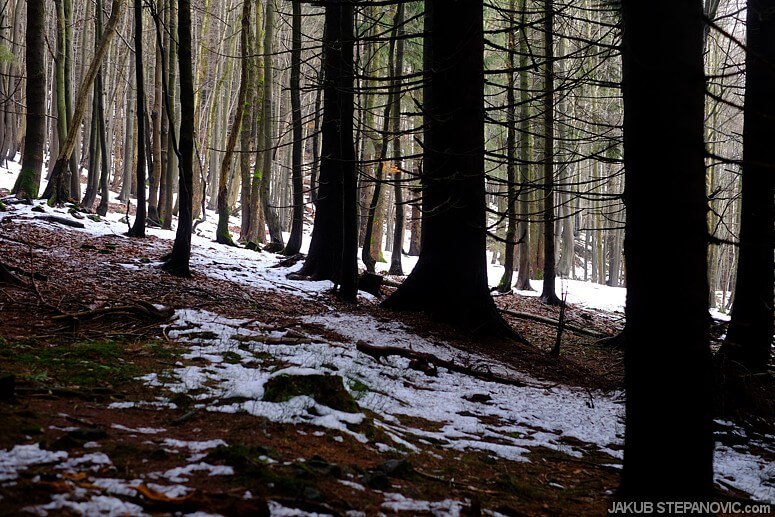 Back To The Roots

"The birds fly south in November, but I go north in December," signs Molly Nilsson in one of her songs. And that's what I’ve done. 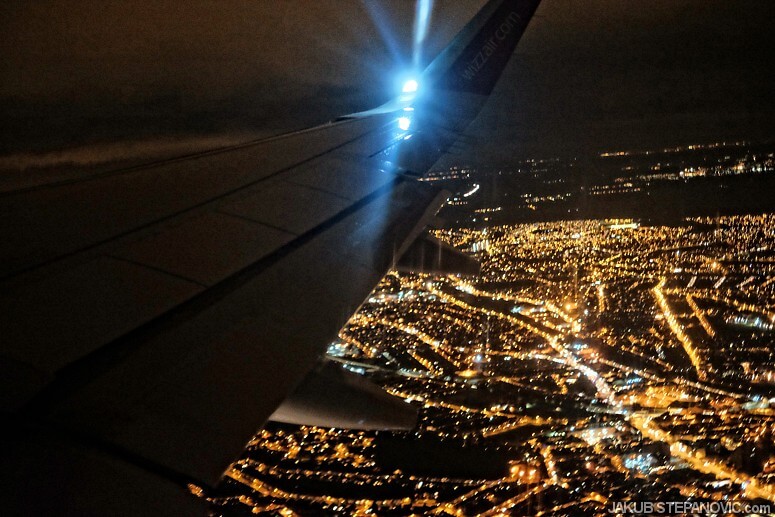 I’ve been in foreign lands for almost four years, but never felt homesick. I was comfortable with unfamiliar environments; in fact, I was happier than ever. My home became wherever I slept that night, not a specific spot on a map. 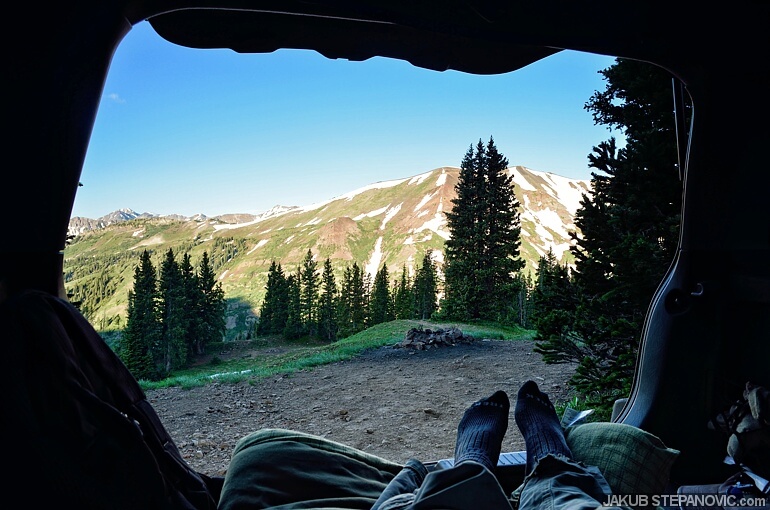 No matter some uncertainty or lack of comfort, going abroad was one of the best decisions I’ve made.

However, as time passed, I've realized some values that one discovers with the distance. That appreciation of things you suddenly don't have around. And this is where the reason for my journey is, as Nilsson continues: "To see my family, they are nice to me, we eat and talk and drink coffee.." Yep. Life shows me that there are moments when you have a chance to see relatives, it is good to take it. So I got me a plane ticket.

But family isn't the theme of this post; the environment is. 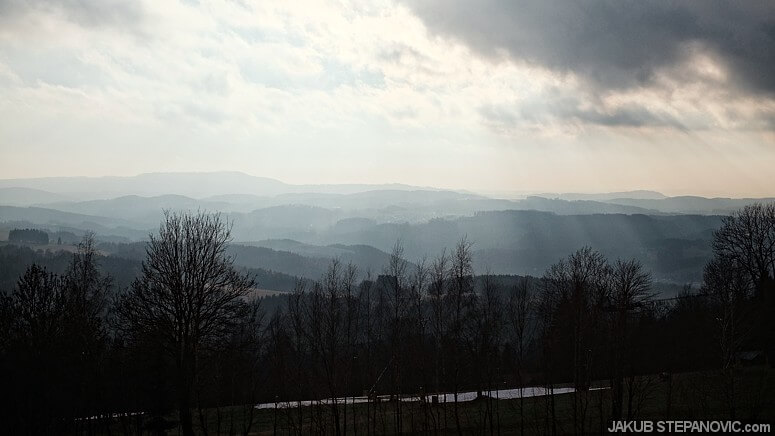 The city where I grew up is surrounded by mountains. Some would say that they’re quite basic, not very tall or with some sharp rocky edges. I’d call them exciting, even more since I haven’t been around them for some time. Their name is Jizerske Hory, (Jizera Mountains), and I went for a walk through a bit of them. 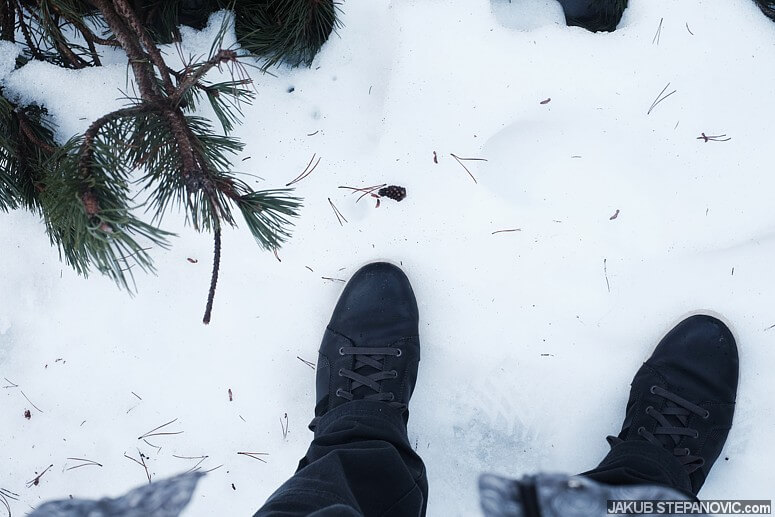 While the city's temperature was warm, due to the elevation difference, there was some snow up there. Regardless, cityshoes did a good job. 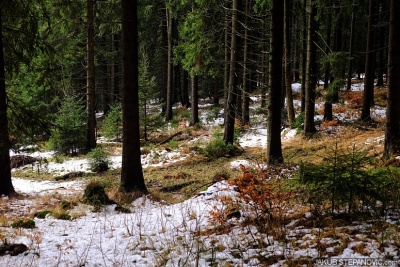 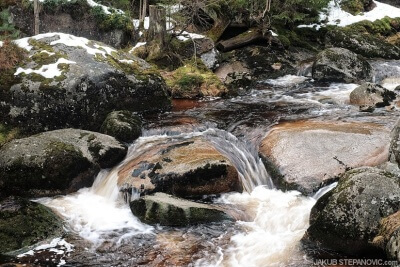 The mountains are unlike anywhere else I’ve been. Places are like people - you can meet two similarly looking individuals, but they’ll never be completely the same. 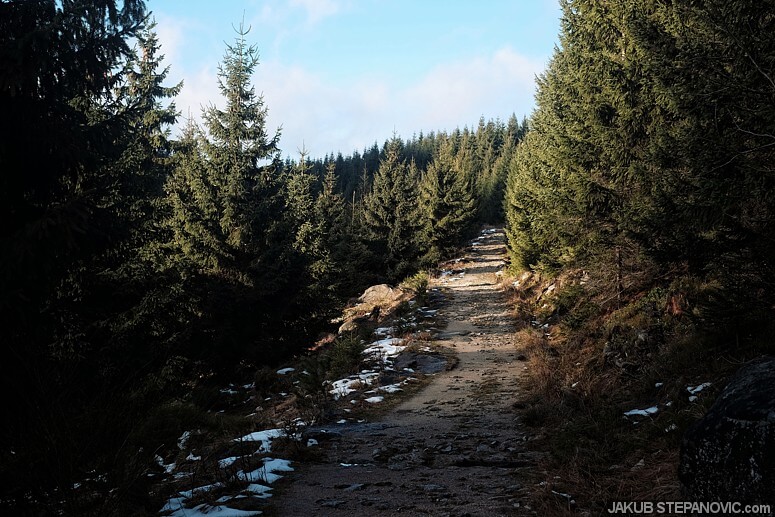 At first, the sky was armored with clouds. But just as the path left deep woods, the sky cleared. Soon I was on an open field with the Sapphire Stream. 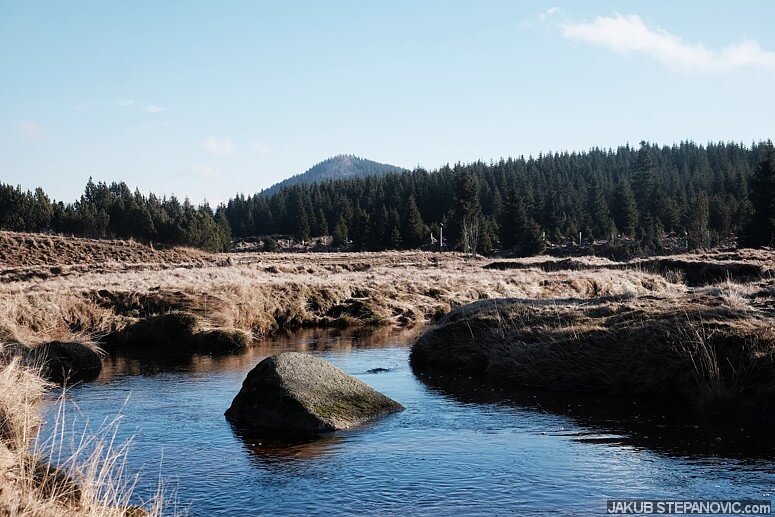 The water here is clear, with a bit of red tint due to some minerals in it. Because of them, there are no fishes, though. 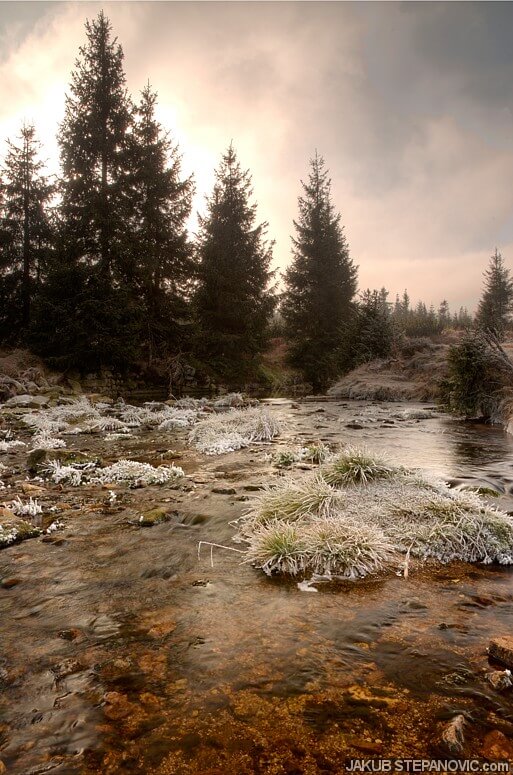 It is a picturesque location, where one can easily get a nice shot with a wide-angle lens. I had only a normal prime on me this time, but here's a wide shot I took back in the fall of 2011.

Further down is a peatland. 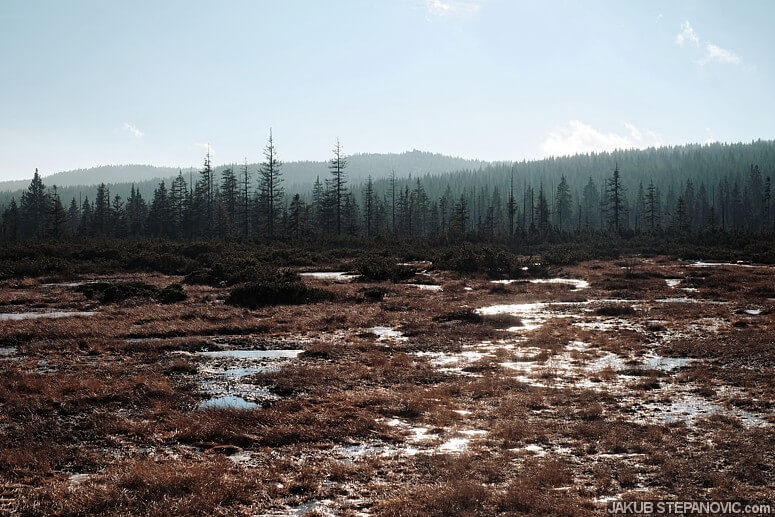 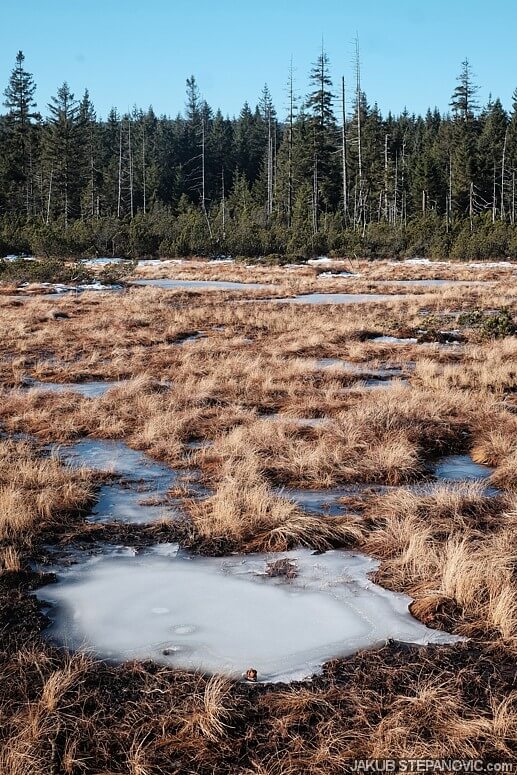 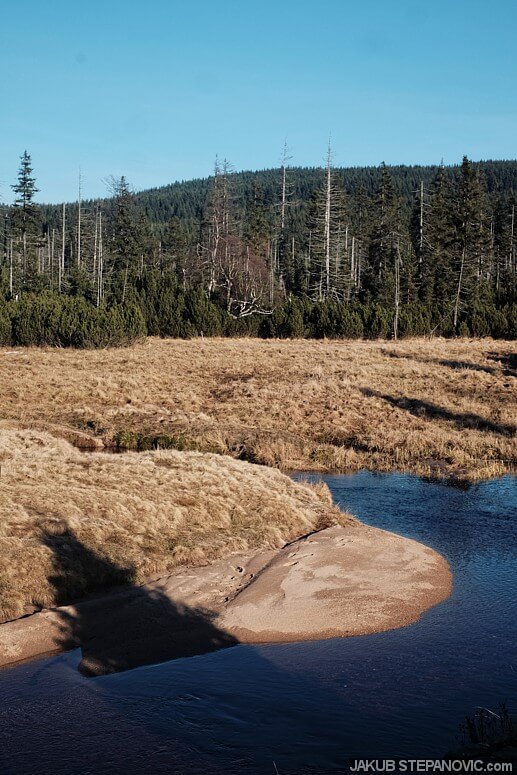 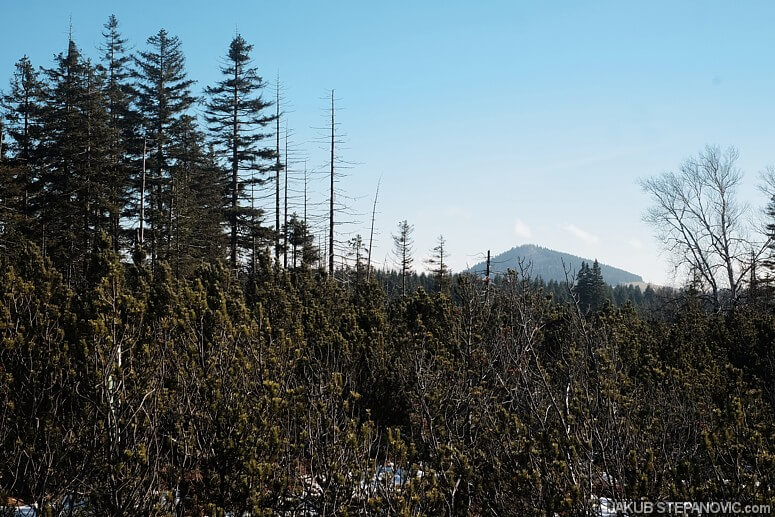 I prefer to return by some other way than I've used to get somewhere, so I went back to the car through this field with an old settlement. 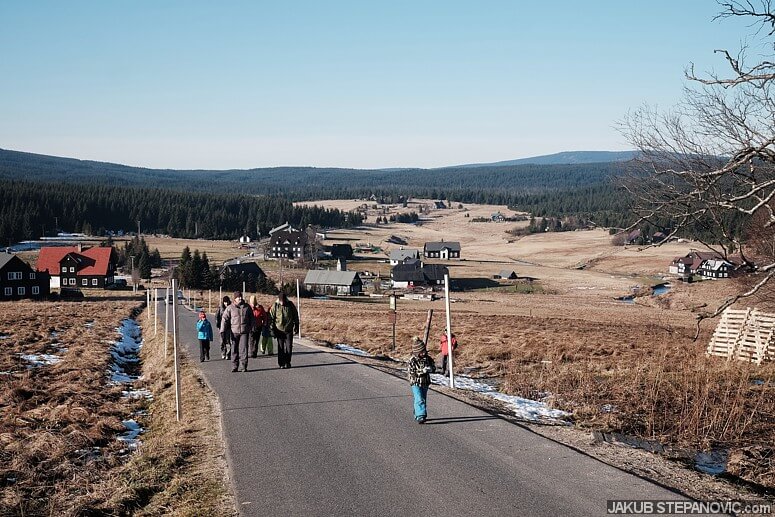 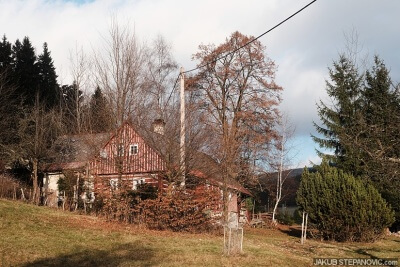 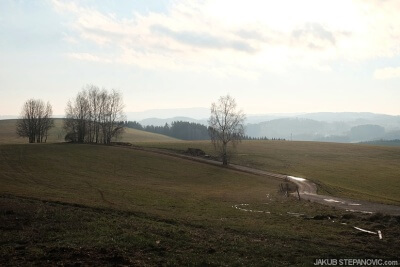 ..at the road back down to the city

Later that day, the sky turned nothing short of brilliant. 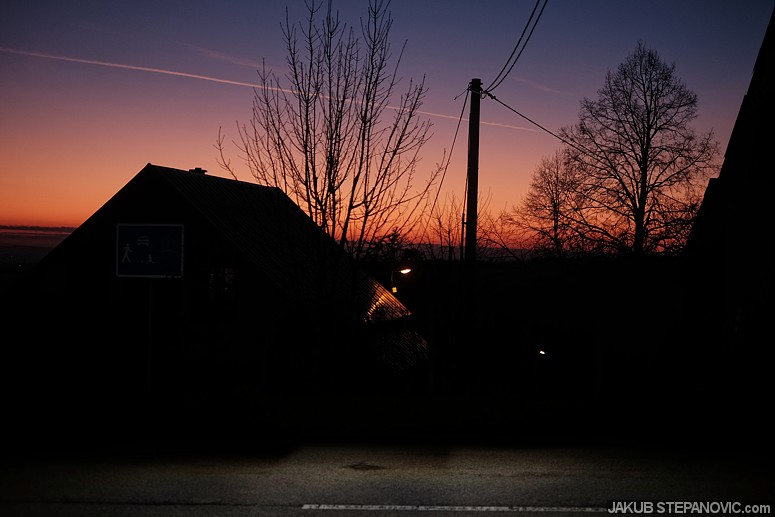 It feels good to take a break from being "gone."

Click for more posts about this area, Jizerske Hory. Thanks for reading.