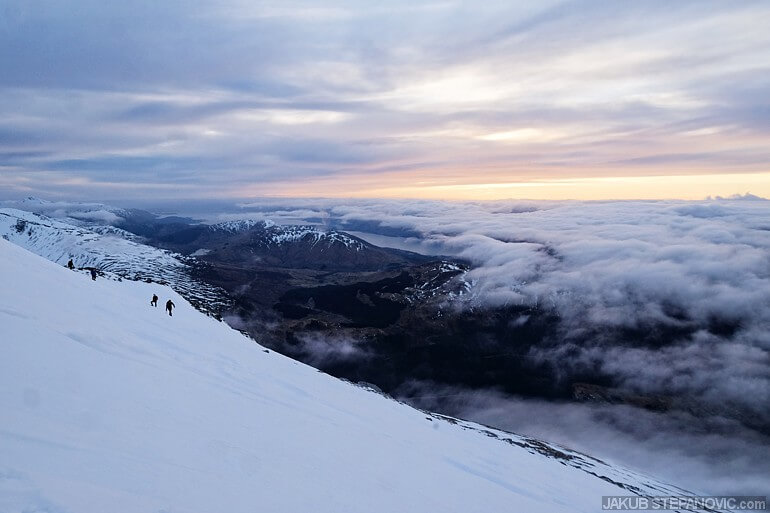 Getting on the UK tallest mountain during the best conditions you could ask for.

It's been a month since I returned to Scotland, after an 8-month long placement abroad. I was happy the moment I got off the plane: The taste of salt in the fresh air coming from the sea, old stone-built houses complement both the brown farmland and the dark green lawns; those weird Gaelic names that I never pronounce correctly; and beautiful grey sky resembling all the hues of concrete... Good stuff. However, there was one thing I was especially looking forward to the reunion with - the mountains here. So when the university's rucksack club announced a hike up the Ben Nevis last weekend, I jumped on board. After all, it was on time, as I hadn't been there yet. Yey! 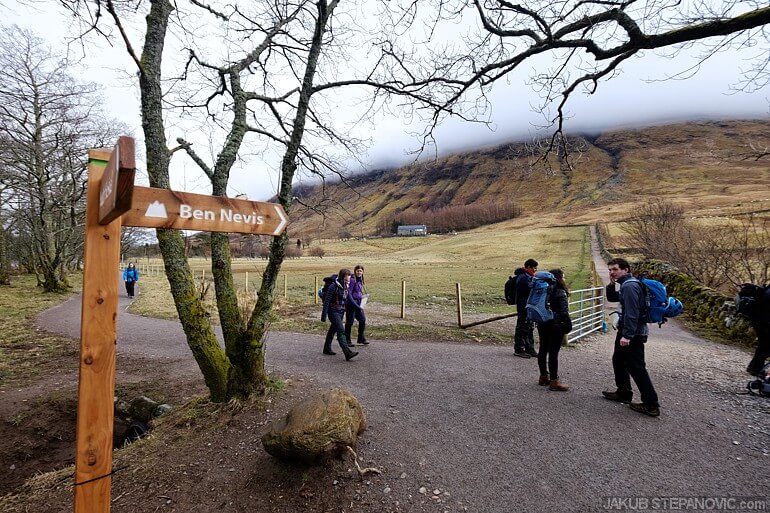 So, Ben Nevis is a mountain of volcanic origin, 1,345m / 4,413ft tall. That might look rather unimpressive compared to the scale of other peaks across the world with the "tallest" title, but given that the trailhead starts only 20m / 65ft above sea level, one still gotta earn it. 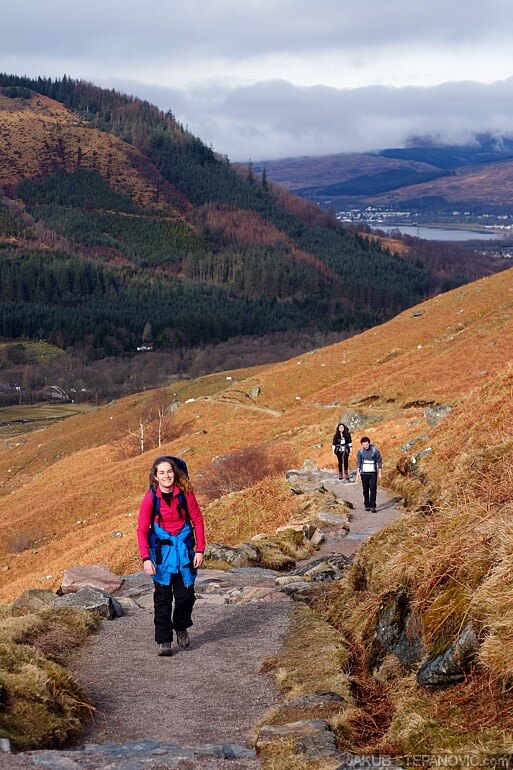 The glen got flooded with the sun now and then, and the good mood was in abundance. Due to the status of the mountain, the trail is well maintained, providing smooth progress. That's nice, as it climbs from the valley with each step. 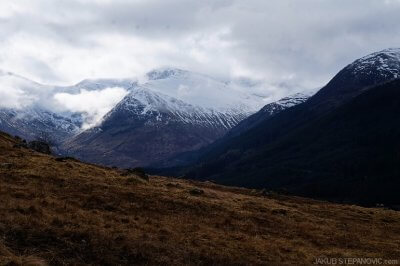 After gaining some 400m of elevation, the land started to be covered in snow. 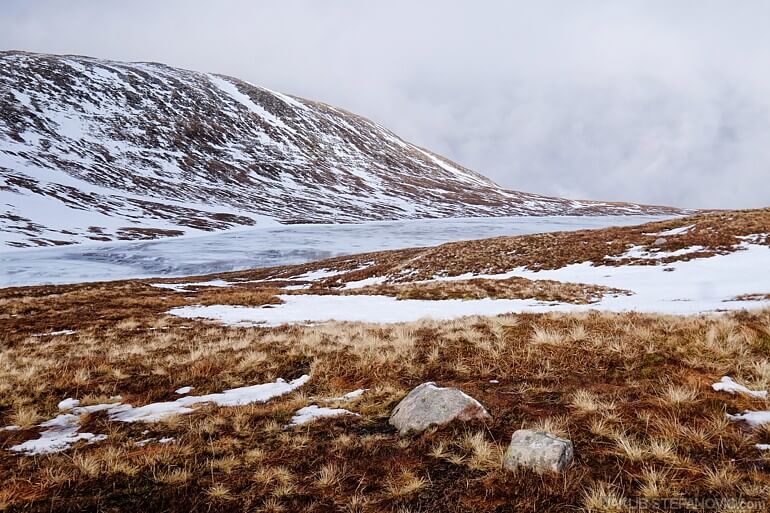 At around 570m / 1,870ft is a saddle with a small loch, a good spot for a lunch break.
From there, we got into a different world: we entered a cloud, and the snow was all over the place. It provided a chance to put some cool gear in use. It's been ages since I walked with crampons the last time - excitement! 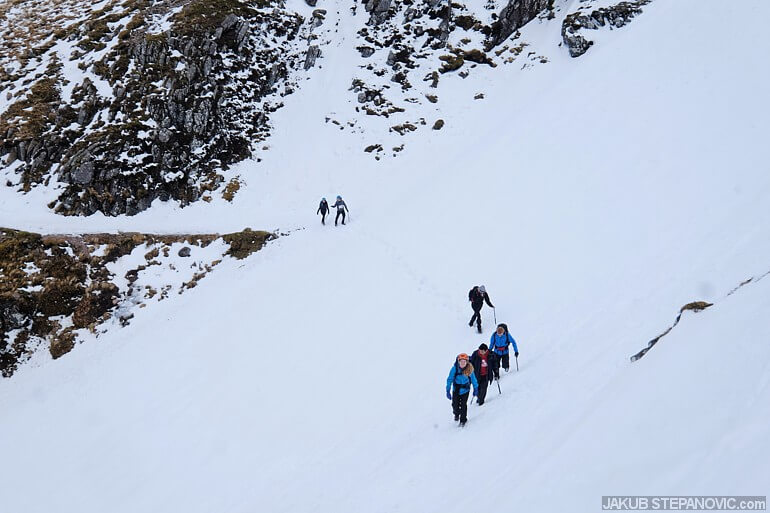 The dullness of views was occasionally broken with a good-sized bird coasting above the slope. 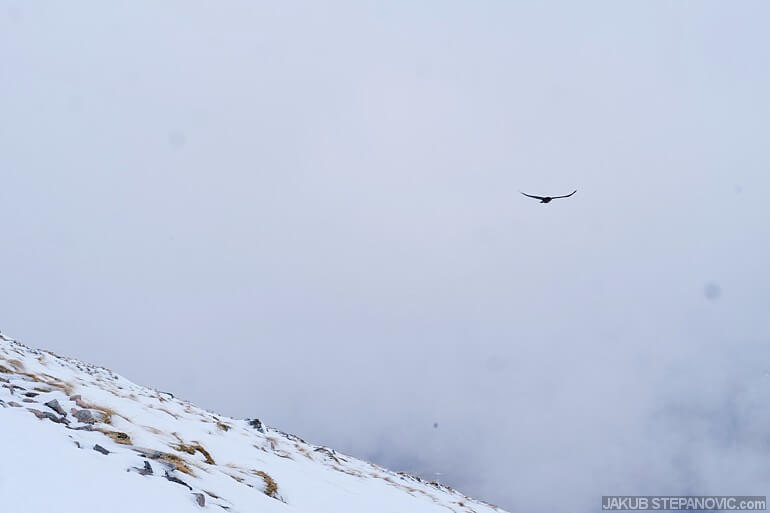 The cloud itself wasn't very tall; thus, after a bit, we climbed above it. 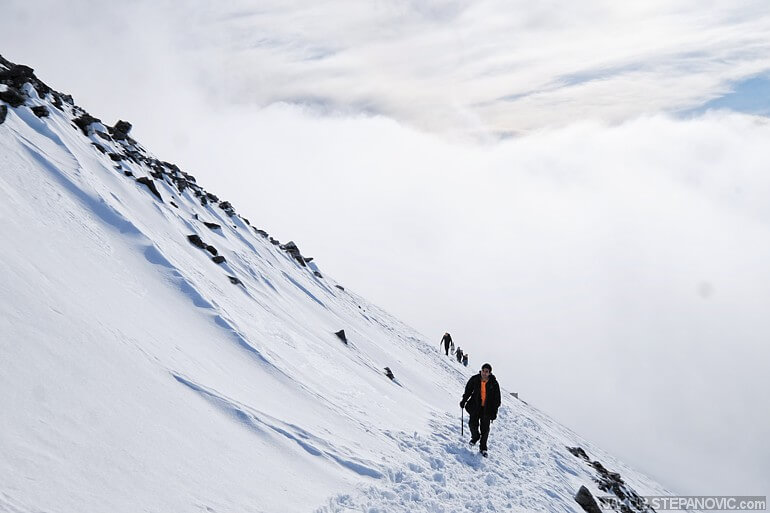 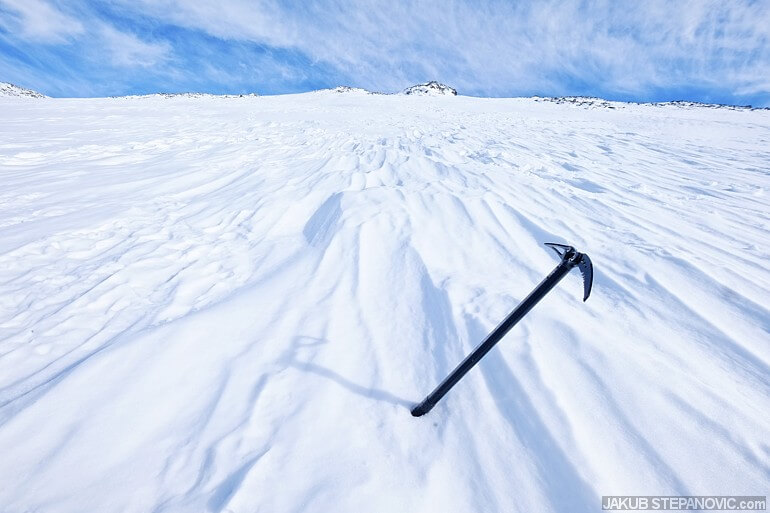 From now on, it was only getting better and better. 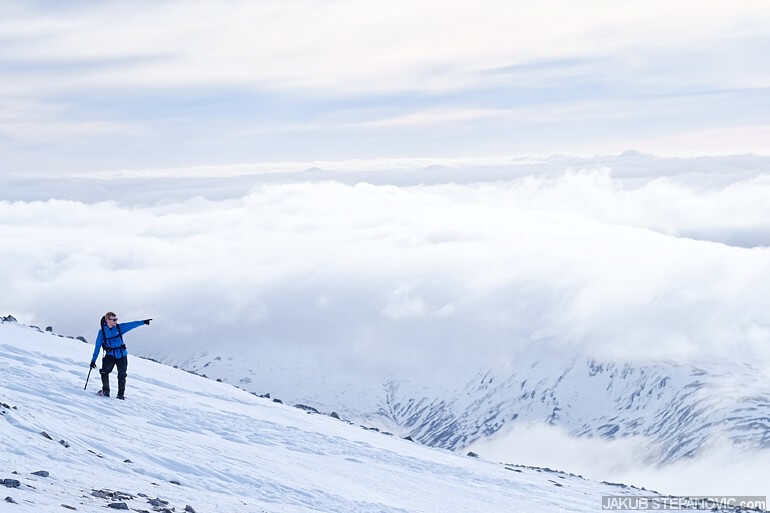 The higher we went, the clouds kept descending and thinning out, even disappearing at places. This revealed some stunning outlooks. 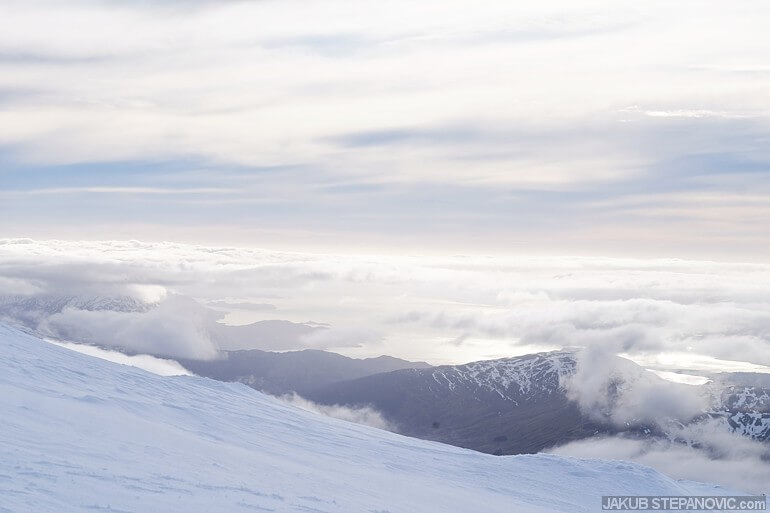 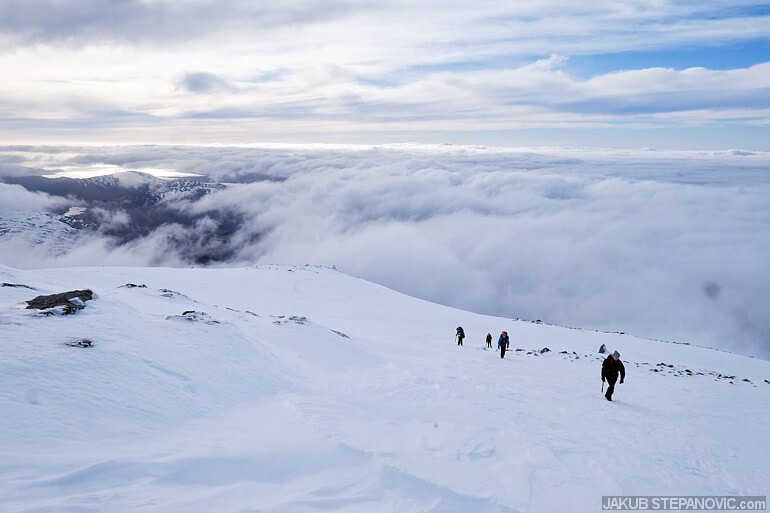 The trail eventually reaches a scenic ridge that follows towards the summit. 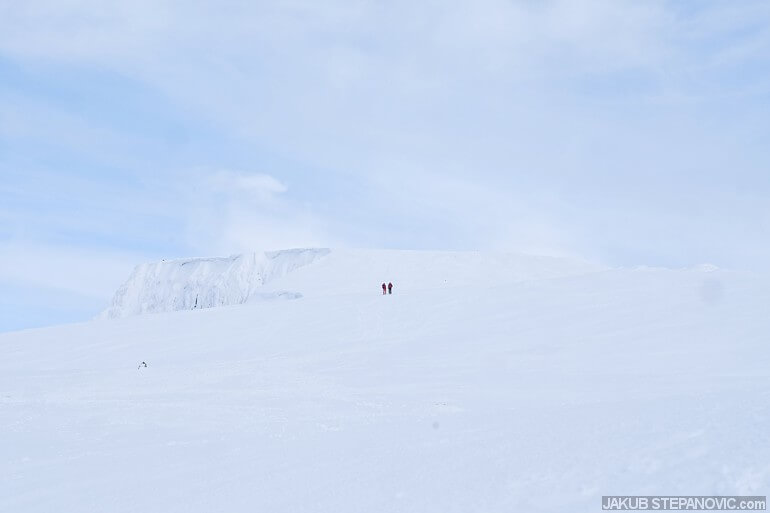 ..makes a human feel small, for once. 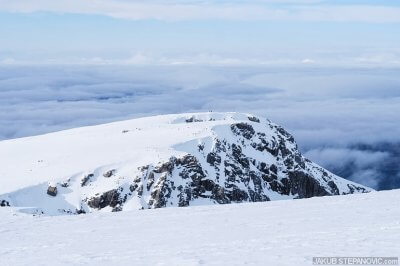 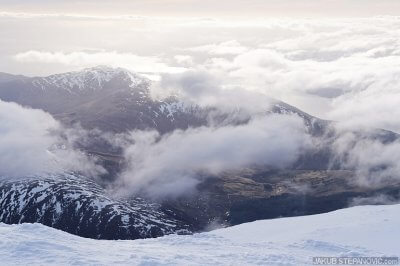 ..on the other, view on peaks growing from the sea.

..have I mentioned the views?! 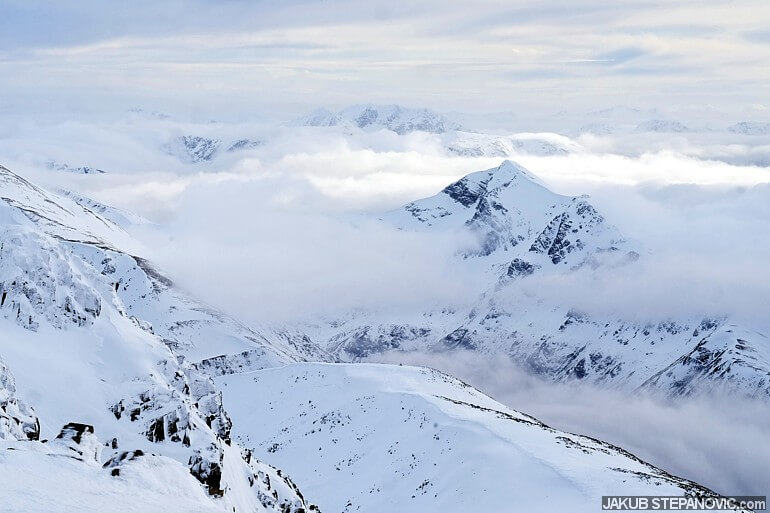 On the summit is a shelter against bad weather, which in our case wasn't needed - It was a calm day, besides occasional gusts, there was no wind whatsoever. Experiencing that on Ben Nevis, that's like winning a lottery. 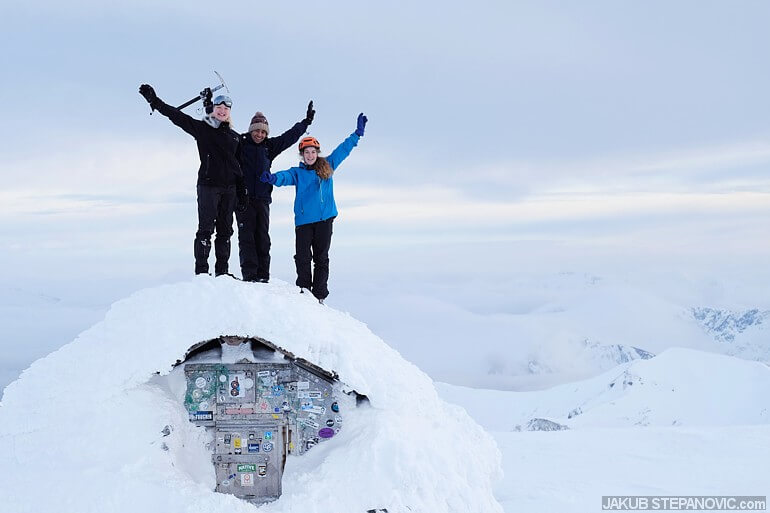 When "standing on the roof of the British Isles" has figurative but also literal meaning. 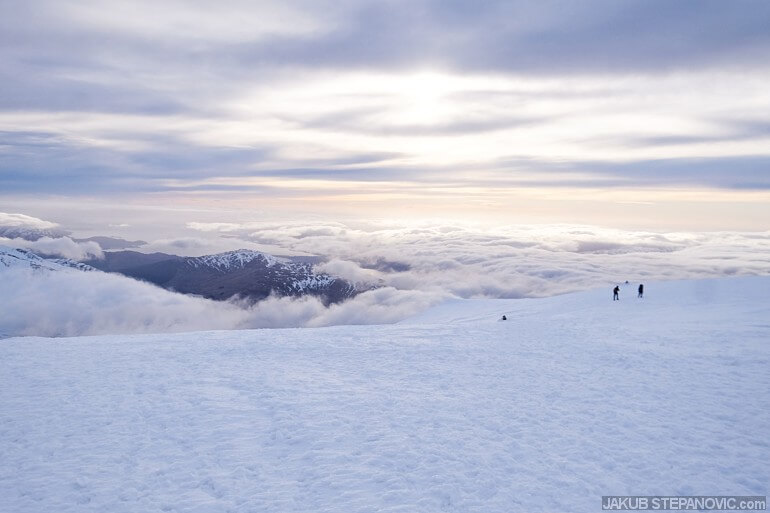 Walking back, the end of the ridge welcomed us with a steep slope. Its frozen state offered a rather attractive alternative to walking down: slide. 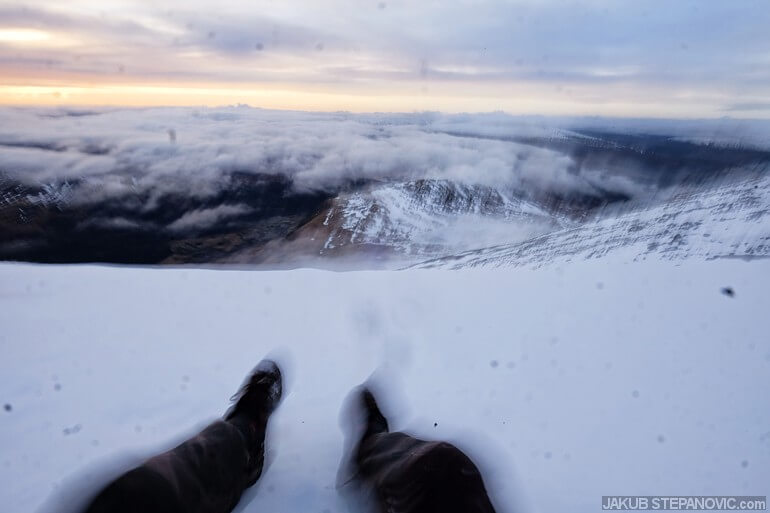 This meant to get a bit wet, but I was thinking, "It would be a bit odd to have a trip to the Highlands and don't get soaked at least once." Moreover, what a small price to pay to cut down the time and effort of descending while getting such fun. Smiling like a five-year-old on a toboggan, it was terrific: 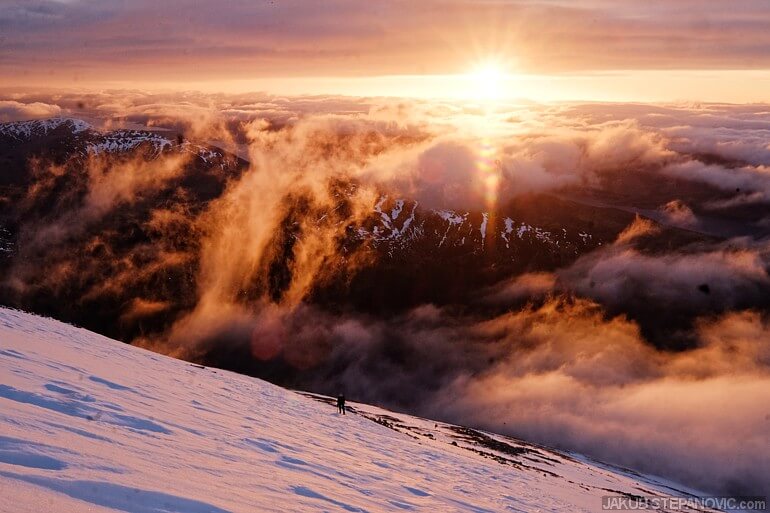 Slide, then stop to enjoy the views (again!), take pics, check out a map to keep on track (and off the cliffs), and repeat - all the way till the snow ended. 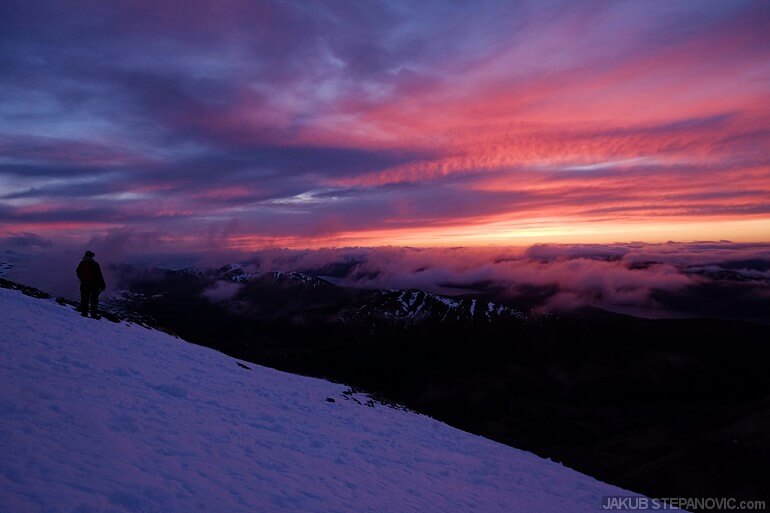 By that time, the sun was already beyond the horizon, and so it happened that before reaching the bottom of the mountain, it was pitch black. Even then, there was still plenty to admire. 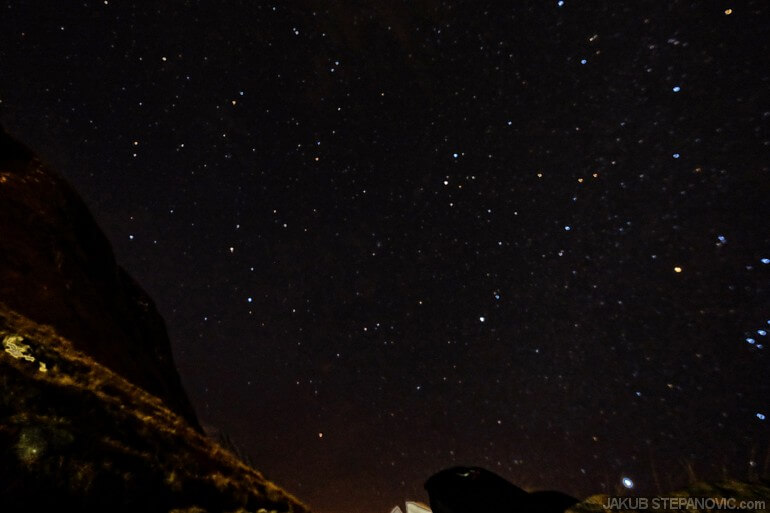 Wow! What a great experience! Your images are breathtaking.