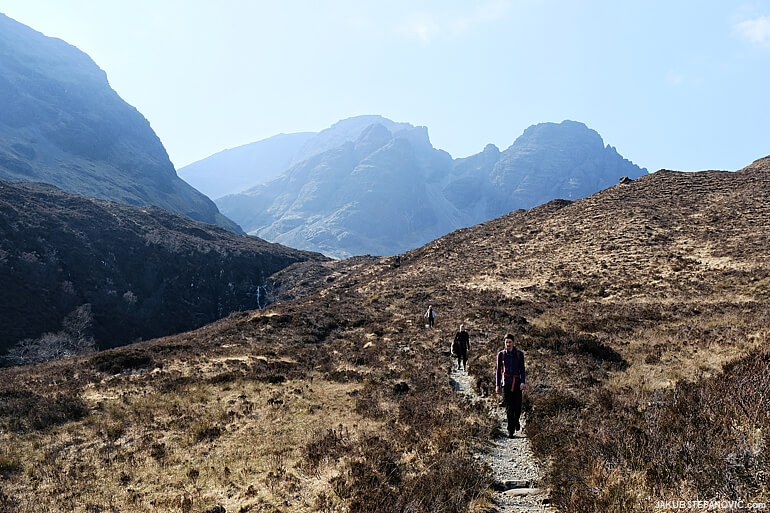 Climbing on the magnificent Cullins' outlier on the Isle of Skye.

The other day (about a year ago), a few of my friends and I did a tour around some of the Scottish prettiness. Inevitably, it had a stop on Skye, and as it's been a while since I wanted to have a closer look at its mountains, I incorporated the 929 m (3,048 ft) tall summit of Bla Bheinn into the itinerary. The lack of foothills in the area means that one has to start the climb almost at sea level. It could be seen as a drawback, but beginning a day with a beach stroll is all right, I'd say. 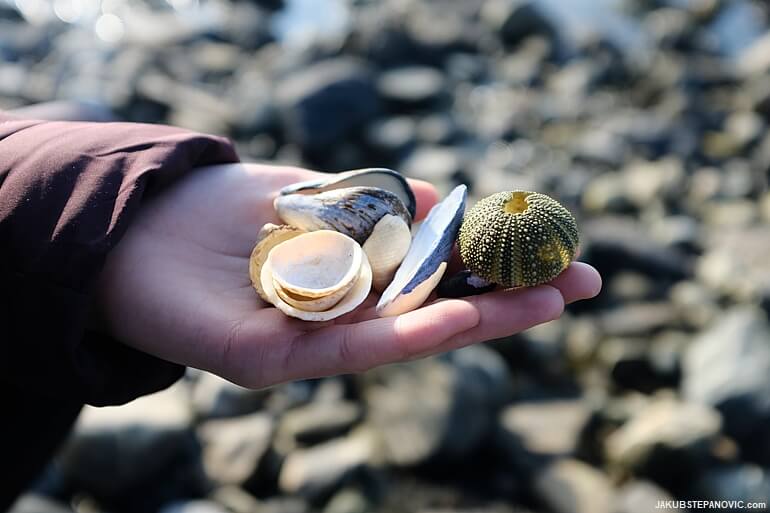 Bla Bheinn is a mountain across a glen from Black Cullin on the west, and it overlooks Red Cullin to the north. Considering that Cullins are among the most scenic ridges of Scotland, I knew that Bla Bheinn is an ultimate viewpoint just by looking at its position on a map. The only question was if the weather would cooperate, as Cullins to clouds are what are neodymium magnets to strong ferrous metals.

The mountains did attract some haze on the day of our ascent; yet, we could see them from a distance. It was evident that we would be in for a treat. 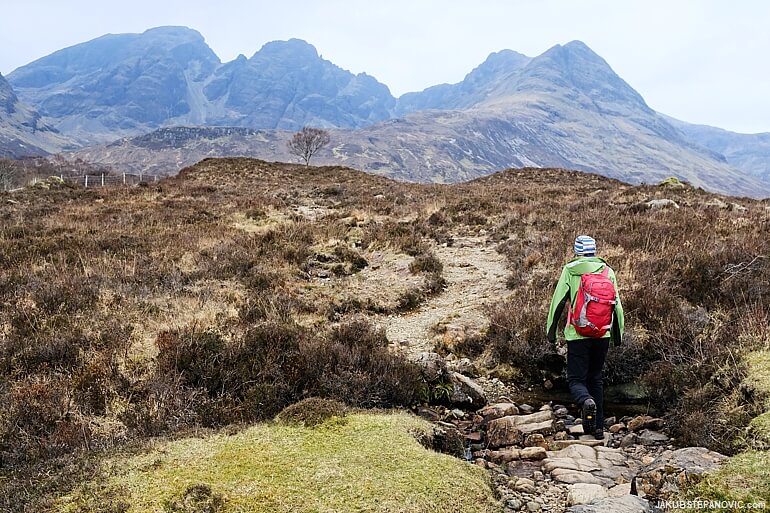 Bla Bheinn is the tall one on the left. Its name is a mix of Gaelic and Norse, and it means something like blue, or blue-black mountain. With the haze, it was rather fitting.

The trail begins by following the stream of Allt na Dunachie, which features a few neat waterfalls. Then, it rises through a cirque to a saddle linking Bla Bheinn with two smaller peaks, and continue climbing on the mountain. 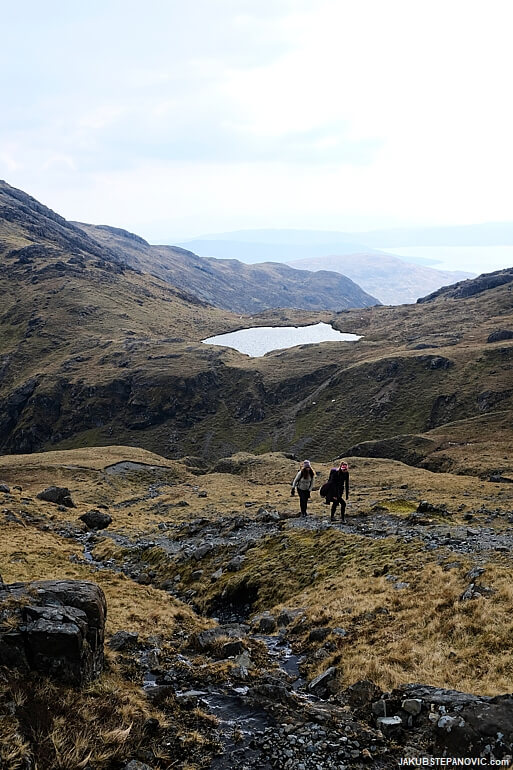 The views were already spectacular by this time: sea lochs in the distance blended with the foggy horizon, and the sun started making a cloud-based camo pattern on the ground. 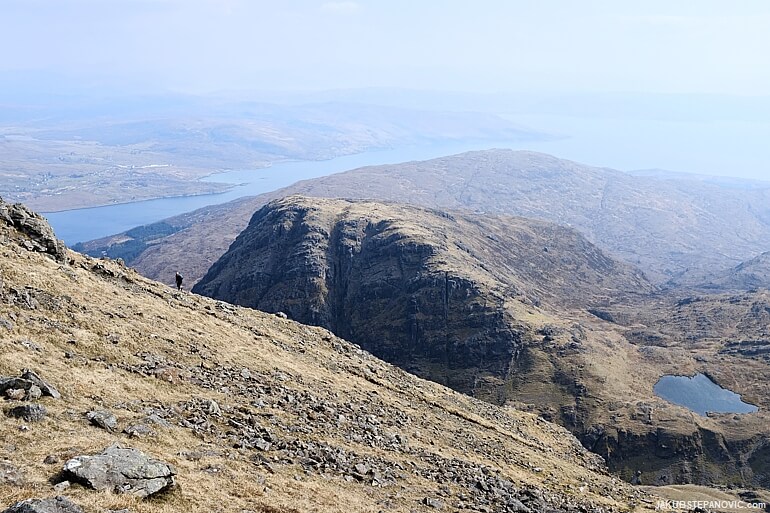 We decided to get up by the eastern ridge, where we got teasers for what kind of landscapes were awaiting us from the top. 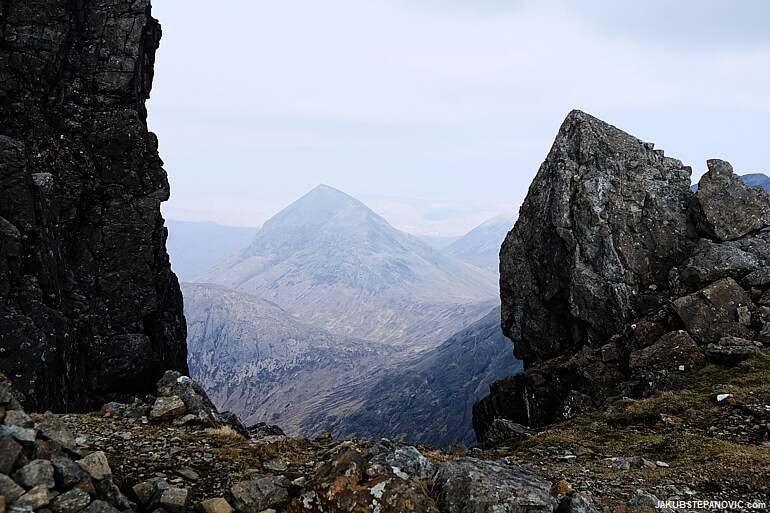 The ridge's edge is full of steep, sharp rocks, which are in constant dialogue with the similarly shaped mountains of Red Cullin to the north. And since Bla Bheinn is taller than Red Cullin, we could see behind them at one point. 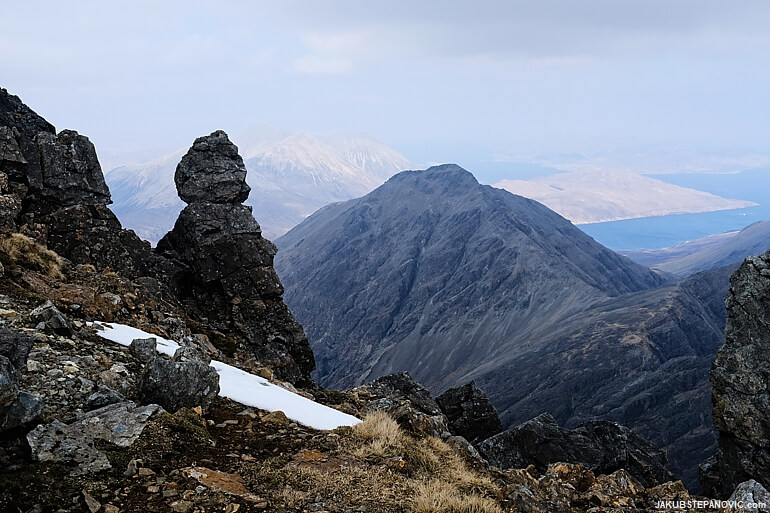 This signalled that we must be close. Sure enough, we reached the summit in a moment. 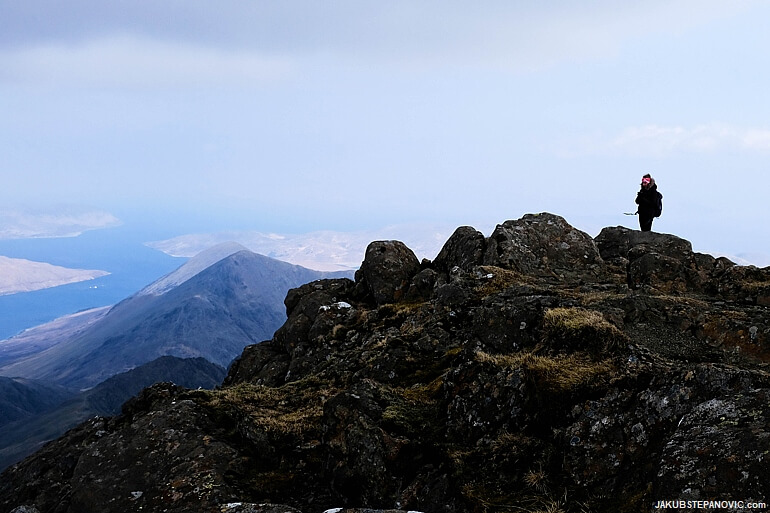 The mountain's western face forms a cliff straight down, so the vistas it gives aren't too far from an aeroplane window. And indeed, it is a place of beauty. 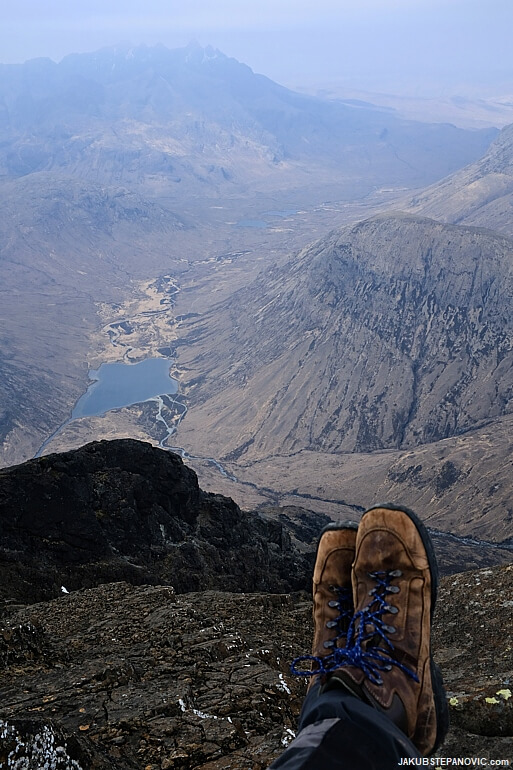 The clouds hide the main cluster of the tallest peaks of Black Cullin, but we could clearly see their northern extension and the remote glen that divides them from the Red Cullin. Long before I planned the trip to Bla Bheinn, I browsed the map of the area and imagined how it looked. Seeing it from a bird's eye felt amazing. 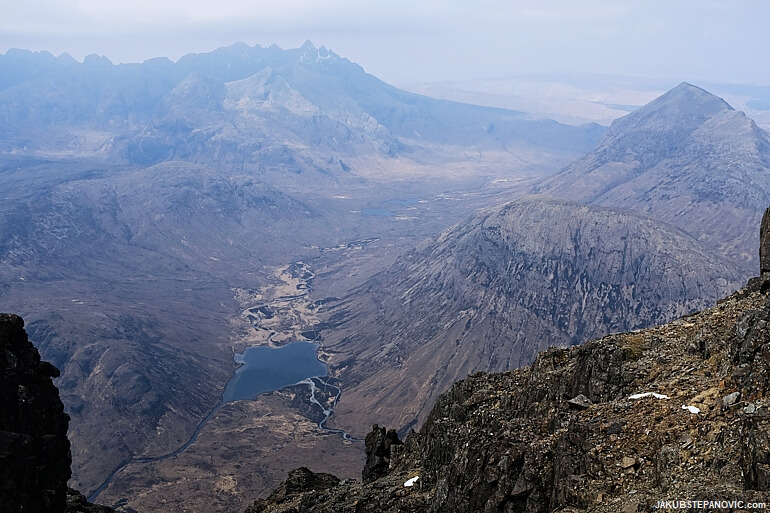 The pointy ridge on the left is the north of Black Cullin, in the middle is the glen with Loch an Athain, and to the right is Red Cullin.

...And looking in the other directions wasn't bad either. 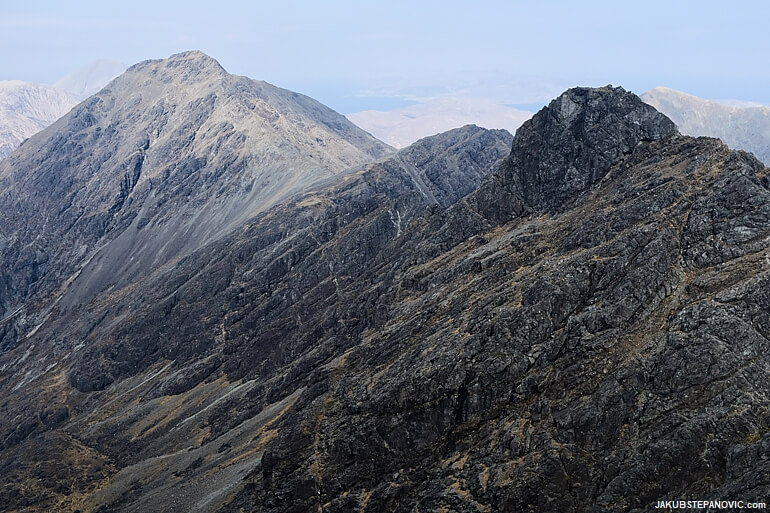 Some parts of the rocks have well-defined sedimentary layers. Walking on it is like being sucked into a geology book. 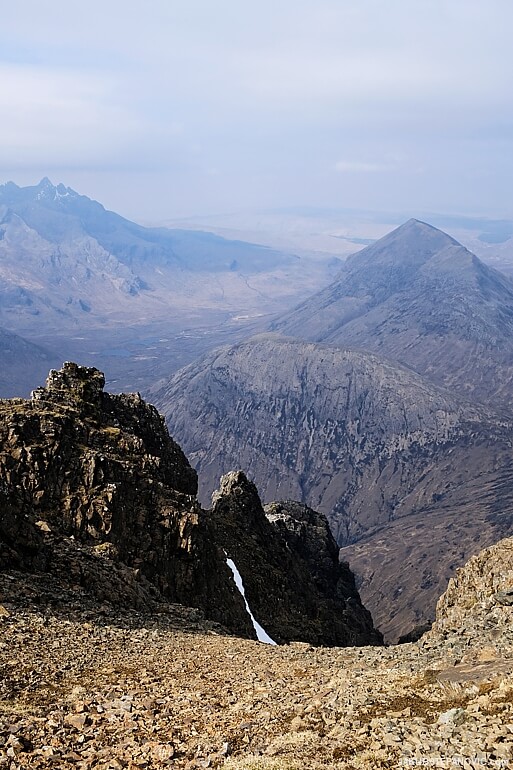 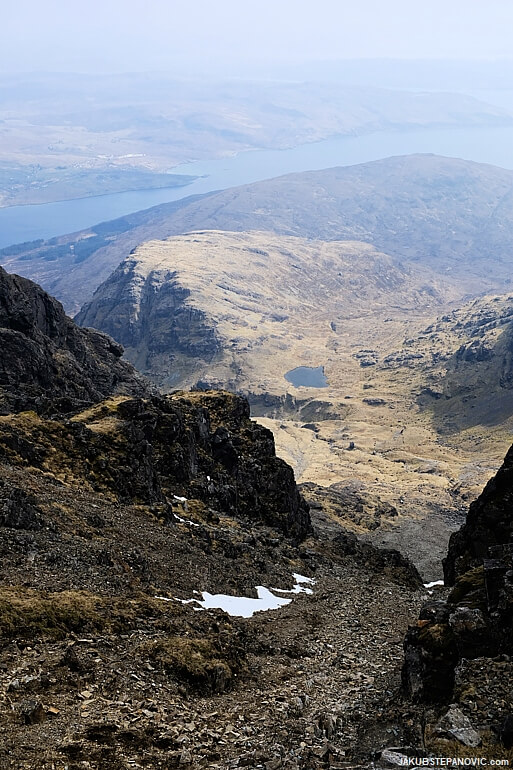 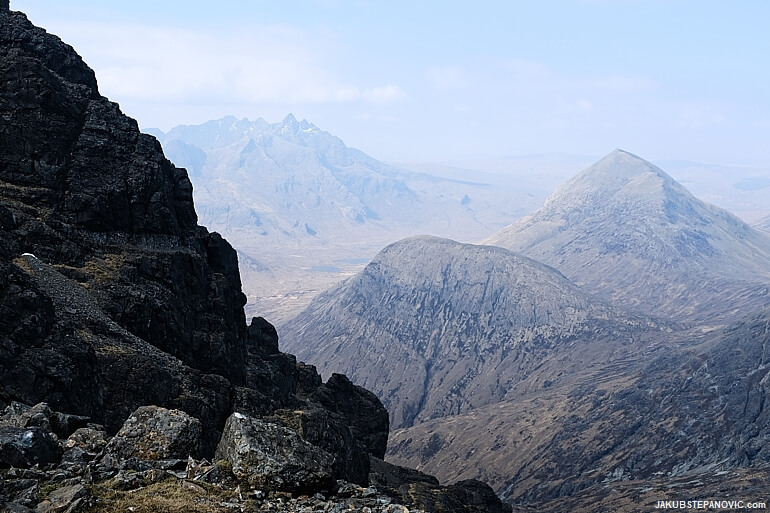 The shard of Sgurr nan Gillean in the background, and an icon of Red Cullin, Marsco, on the left.

After some quality time at the summit, we descended back to Loch Fionna-choire... 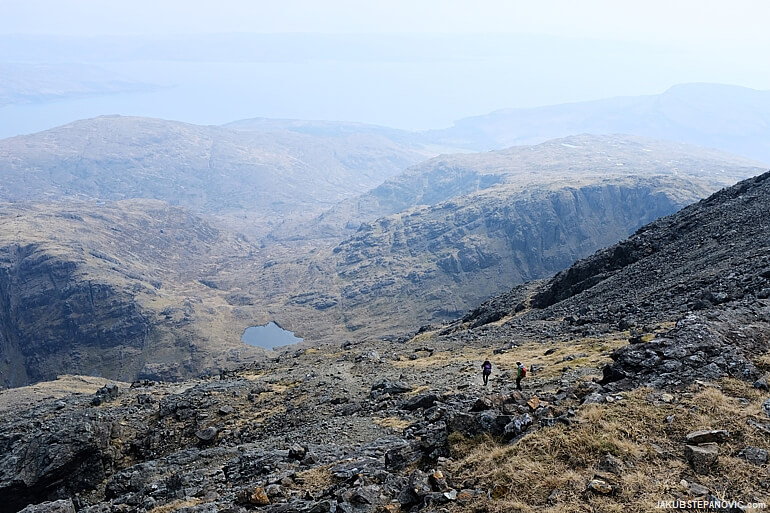 ...and further towards the sea. 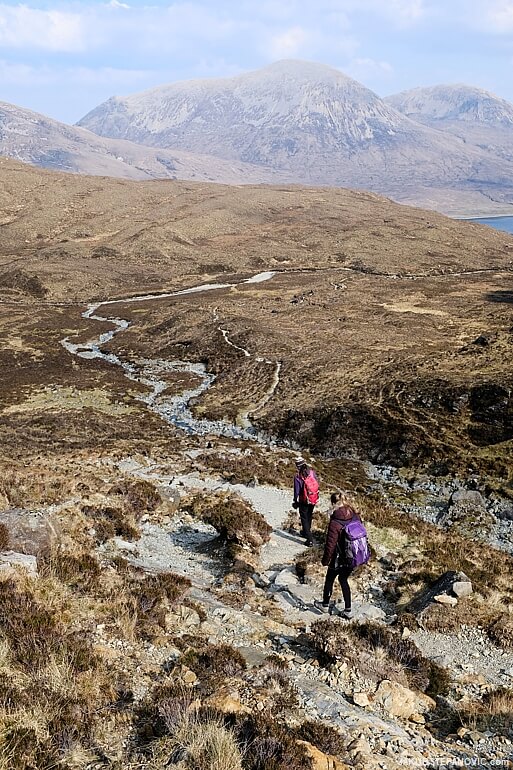 The nice trail in the low portion of the mountain is one of many great projects of the John Muir Trust charity.

Aided by gravity, going down felt half the distance of the opposite direction. But we made frequent stops anyway, as it would be a shame just to run away from such scenery. 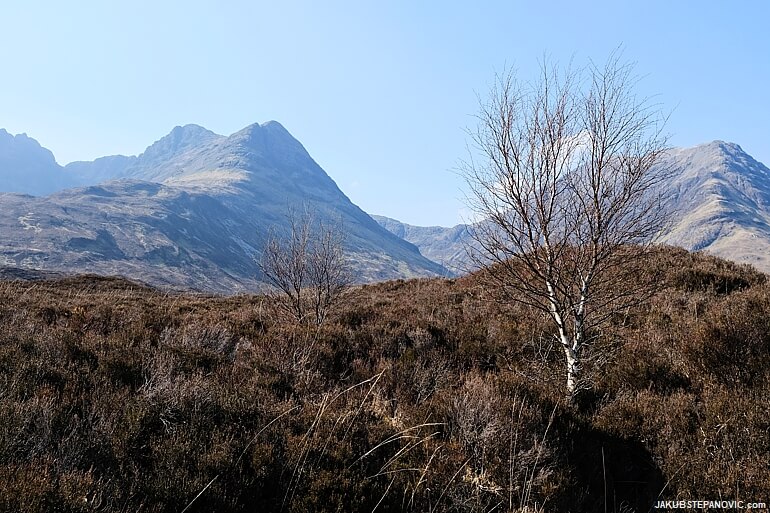 Looking back on the ridge where we've been.

Once back at the car, we made it to the other side of the Black Cullin range, where we took a walk around some of the gems of Glen Brittle. The highlight was this colourful picnic. 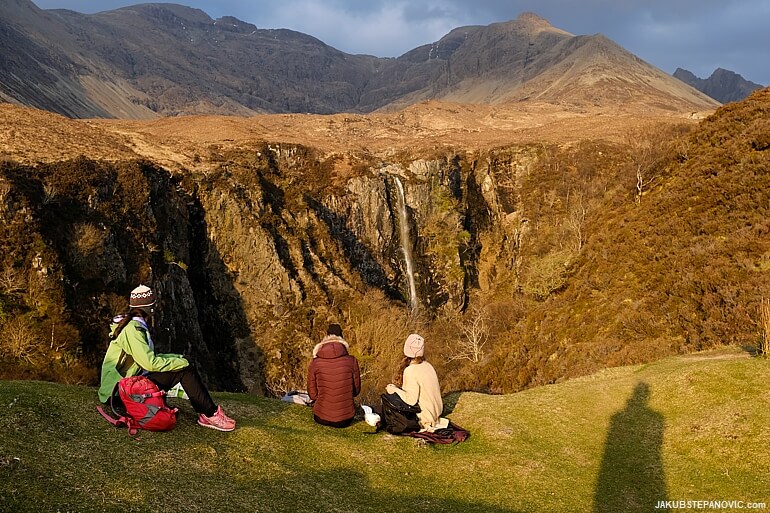 That's about as good as a picnic gets. A superb ending of a superb day.

If you'd like to stay for a bit longer, visit my Blog Archives for more articles, such as: