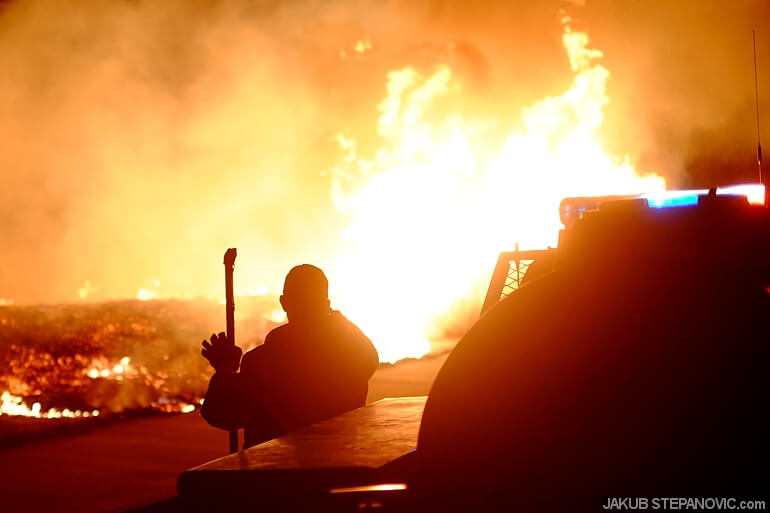 Right now, in a rural part of the central United States, pastures are turning to ashes.

The east side of the otherwise flat state of Kansas has an area called the Flint Hills, where the landscape gets a bit wavy. Moreover, it's home to some of the last remaining tallgrass prairie in North America. Depends on the season, the hills are either brown (autumns and winters) or saturated green (springs and summers).

Mainly during springs, as they receive some rain, the place is like a small oasis.

However, there's one more color the area gets. During March-April, it's rather black.

View at the vast blackness from an interstate, last April.

What's going on? You guessed it; it's being burned. Intentionally.

This is how it looks closer: 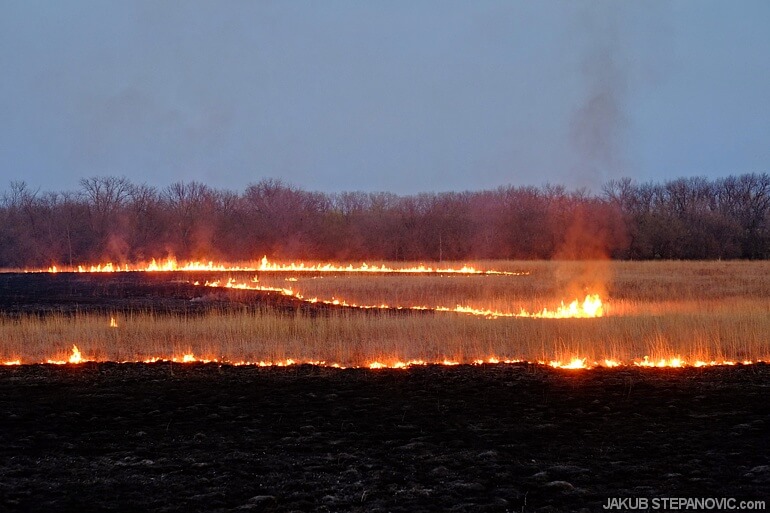 Apparently, ages ago, lightning-caused grass fires removed the old, dead grass and made room for the new. Someone then noticed this effect on the ecosystem and begun to reproduce it. Since then, it became a tradition, and nowadays, the fires are set on purpose through the whole area to renew the biomass quicker.

Here's a graphic example of what the burning achieves: 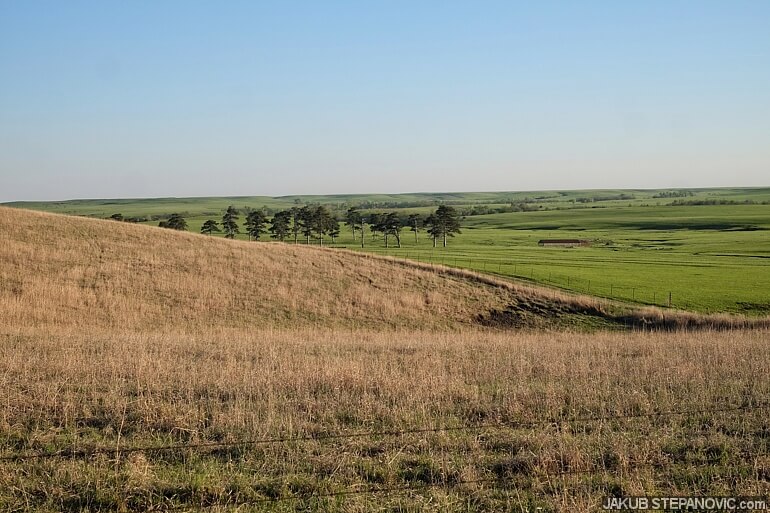 All the tall brown grass in the foreground is an old one from last year(s), while the pasture in the background was burned about a month ago, and is all green by now.

It is also an effective way to kill weeds. As a side effect, it gets rid of everything alive in its way. Small wildlife, trees... 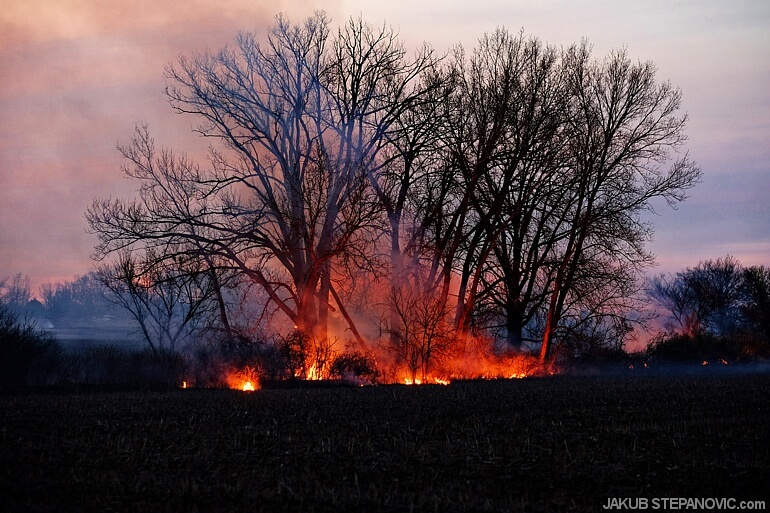 It is not that Kansas would have too many trees to spare, but that's just how they do it here.

Setting the fires is a unique process. Every property owner has their own way of doing the job, usually using some custom made tool to initiate the blaze.

For example, these folks use a hollow iron pole with a chain welded at its end. 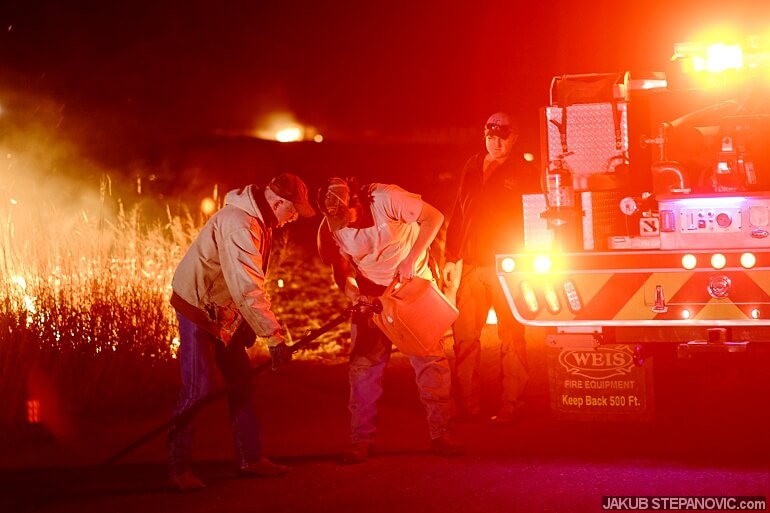 The pipe gets filled with gasoline. Then you light it up, and then everything you touch with it engulfs in a fire.

They are from the Chase County fire department, which is responsible for burning the grass on public land. At first glance, it seems like all you have to be careful is not to point the stick on yourself; however, there's more into it. If you don't watch the wind, the fire can trap you inside a circle. You also need to maintain specific speed: go slow enough to make a fire the most efficient, but fast enough to don't get burn. And not set the power lines on fire. 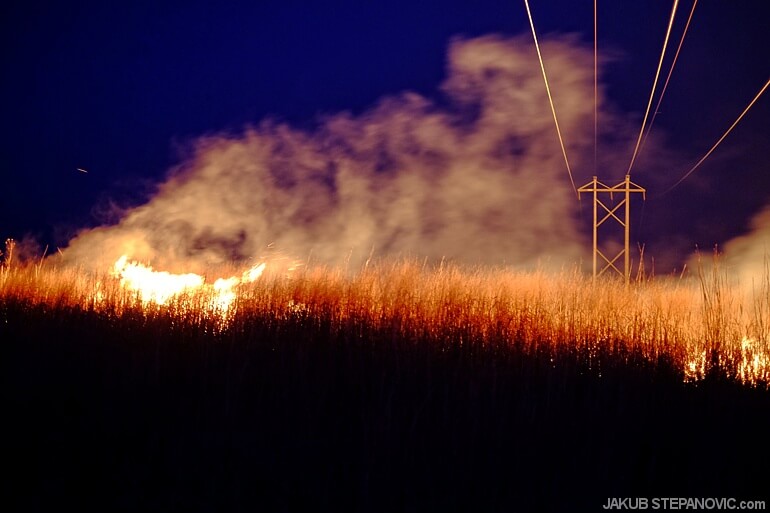 But no worries: it is in the most qualified hands out here: the stick’s operator is Mike, a guy with 43 years of service as a firefighter in this area. 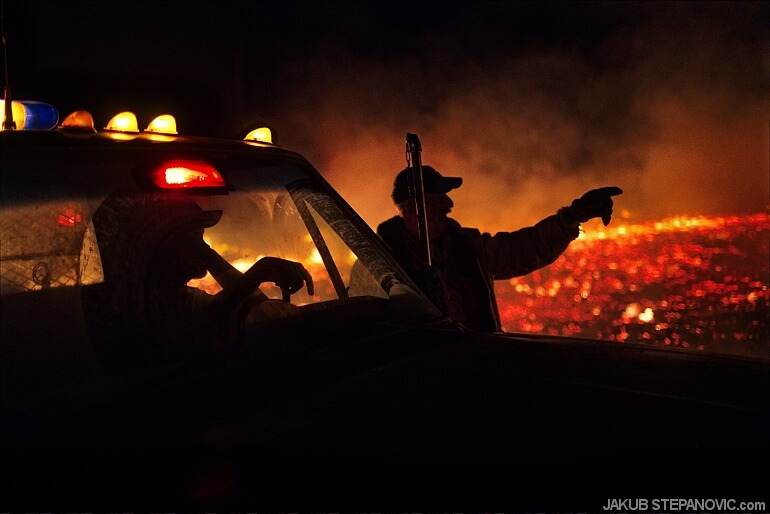 Mike orchestrates the heat. His knowledge of the element is breathtaking (so the ubiquitous smoke is). 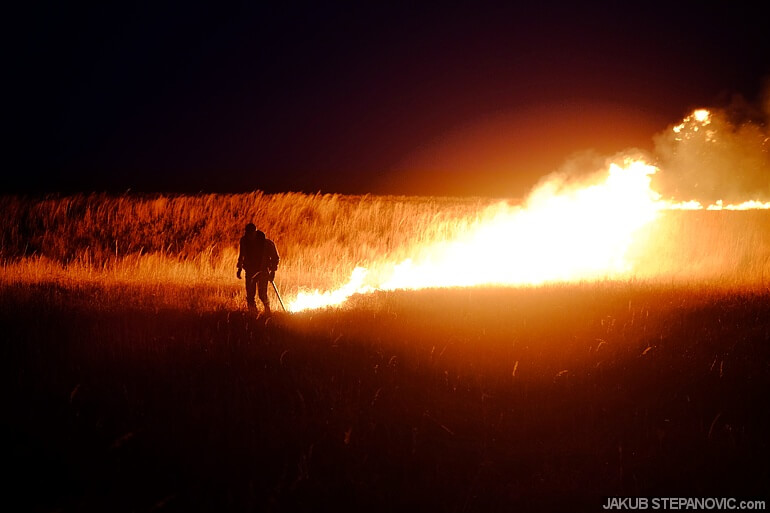 Dry, dead grass fueled with petrol ignites rather well, and the heat is immense. Standing several feet from the blaze, I felt like my eyebrows melted. 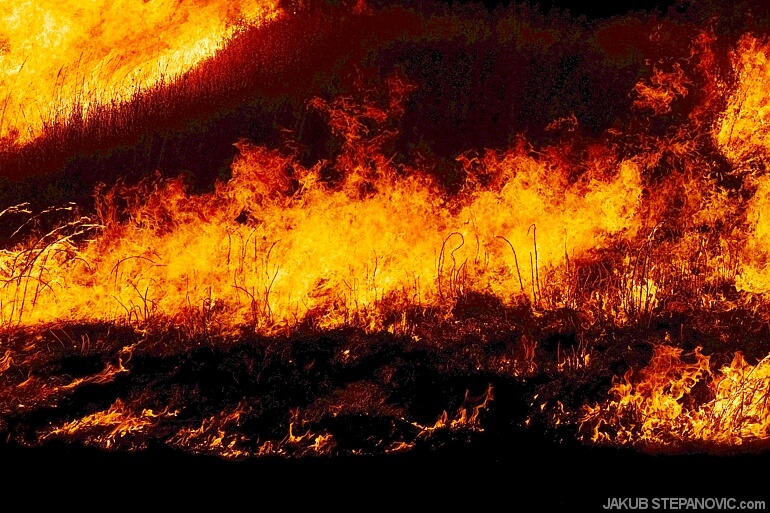 When the fire is under control, it is a remarkable experience. 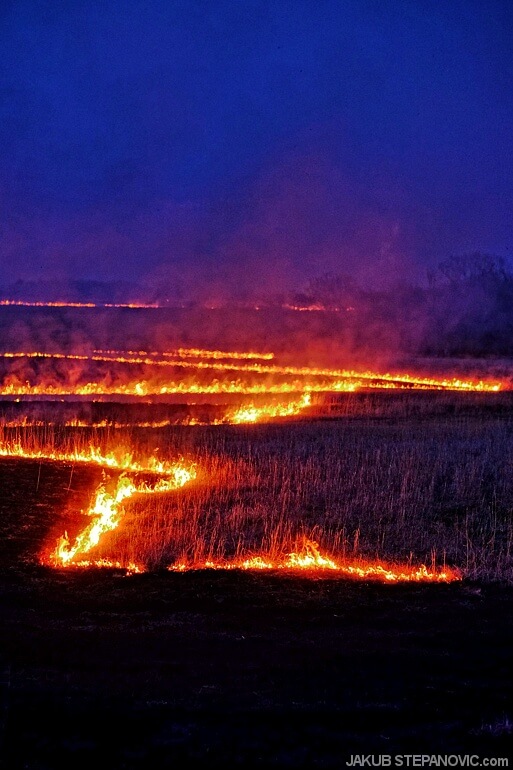 Well, but that's the kicker. Even though this has been a practice for generations, given by the strong and unpredictable Kansas' wind (and even more unpredictable human factor - not everyone is a man for the job as Mike), there are hundreds of cases every year when burning get out of control. That said, every local fire dept has special rigs to help them fight grass fires: 4x4 pick-up trucks converted to carry the equipment. 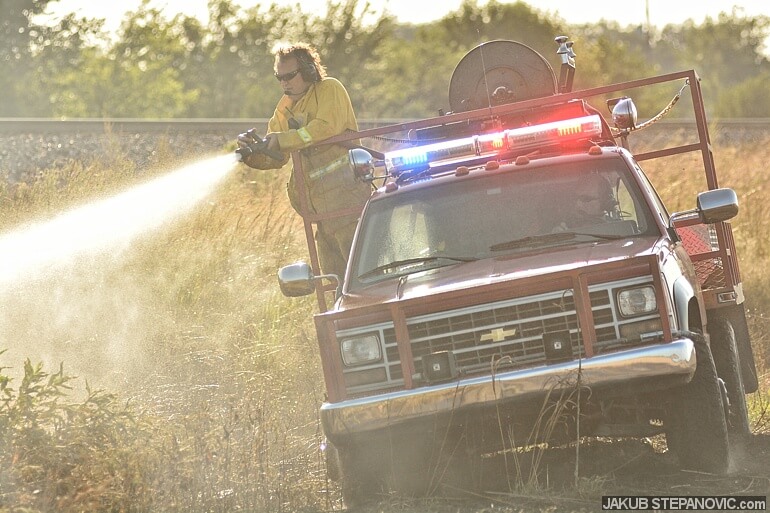 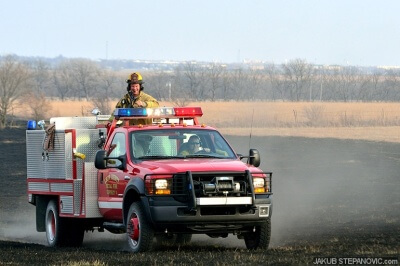 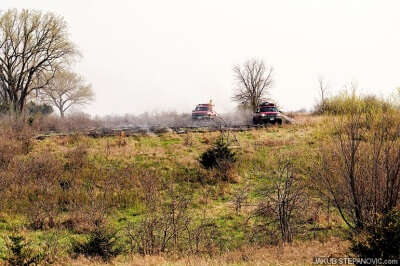 The trucks are lighter and more maneuverable than a standard engine, but even with good tires and low gears, it is a challenge each time to get around: as they water the fire, the soil turns into mud, and it is easy to get stuck.

This was an area of over 1,500 acres that got burned by accident. 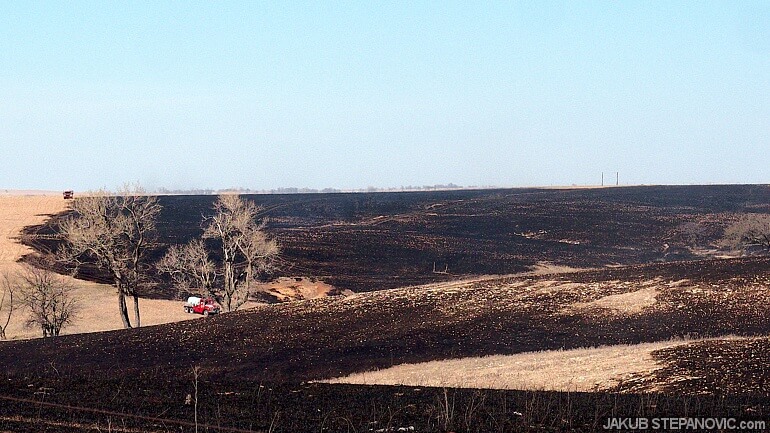 It took over 20 units from ten fire districts to put the fire under control.

But as long as it is just the grass that turns into dust, it's not such a tragedy. The situation flips when another property is endangered. It happens that fire cares less about fences. 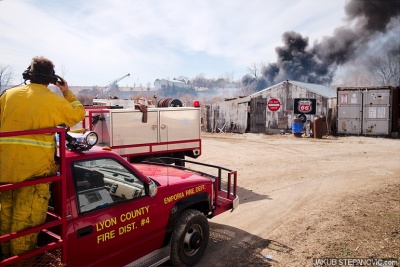 While these people do all they can.. 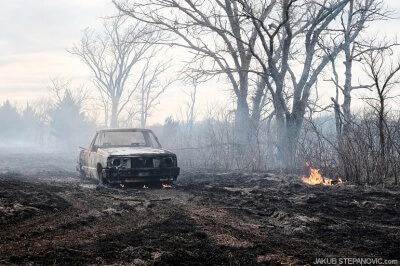 ..sometimes, the fire is just a step ahead.

A year ago, accidents like these were on my daily (or almost) routine. However, it's not how the Flint Hills remain in my memories. Rather than piles of burning grass, I like to think about them as a place with a burning sky. 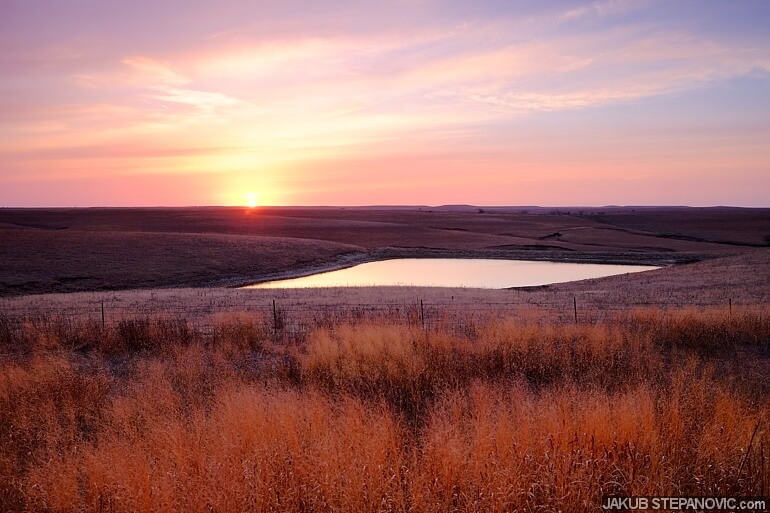 If you enjoyed this post, check out my other articles about Kansas, or all of the USA. You can also visit my Blog Archives for more categories and topics. Thanks for reading!