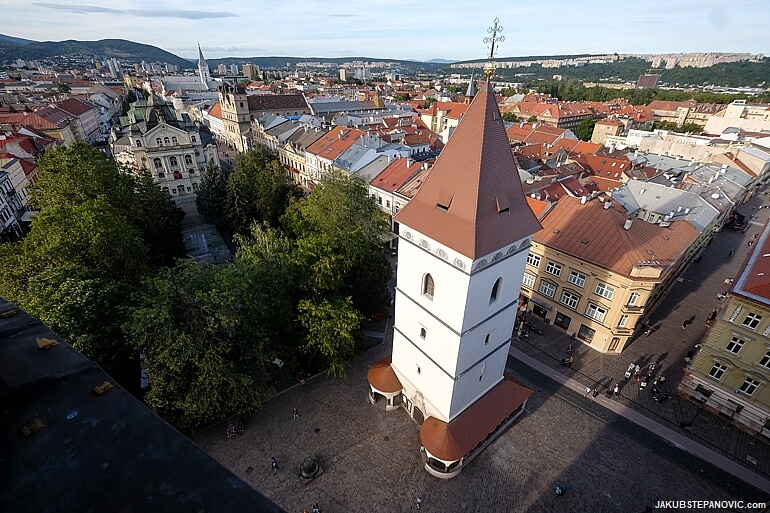 Kosice is a city with a long history on the east side of the country, with nearly a quarter of a million population. It also hosted an event that I photographed the other day, so when the work finished, I set off to check out the city centre. 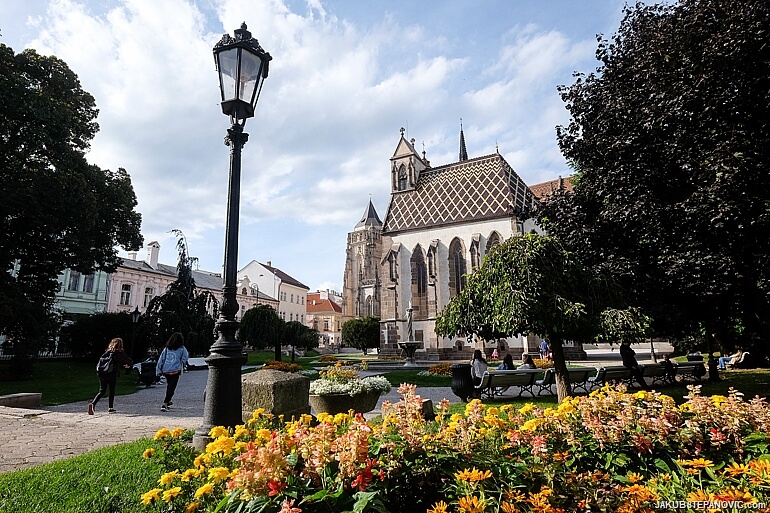 St Michael's Chapel in front of the St Elisabeth Cathedral

I wanted to use the fact that I am here, but I didn't aspire to cover marathon lengths since I still felt my legs after a few hikes I did recently. Conveniently, the old town is compact and walking-friendly; one can see the charming historical buildings with ease. 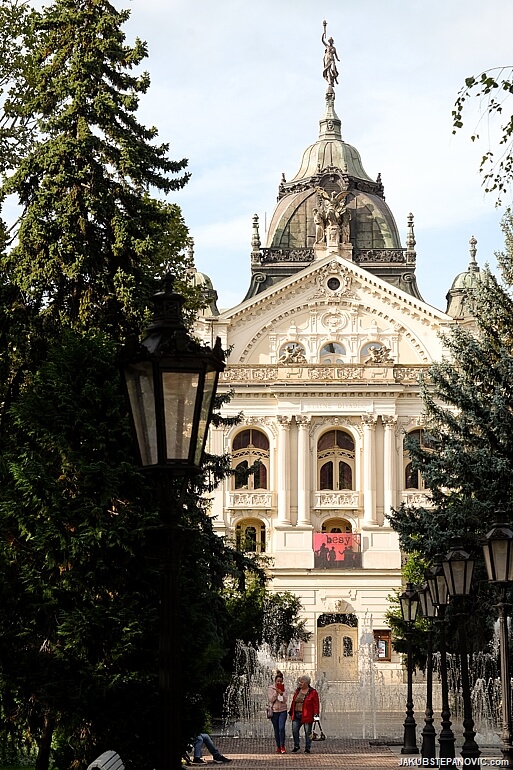 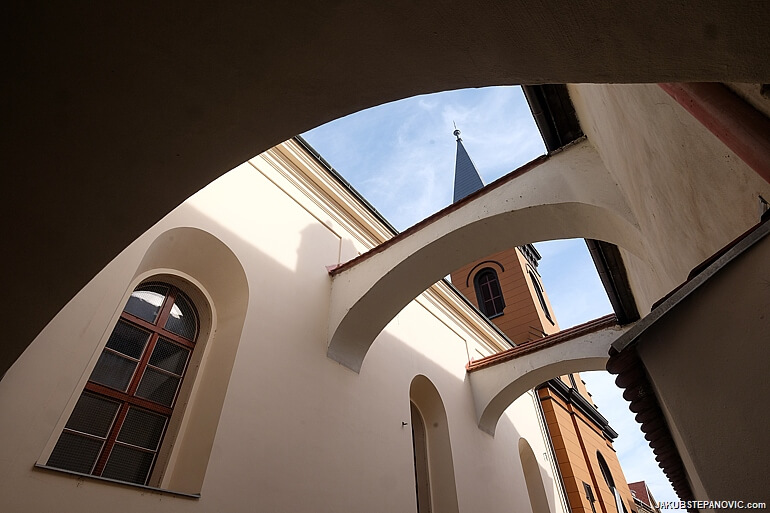 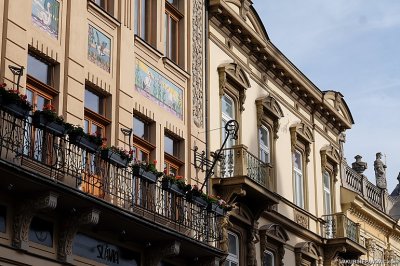 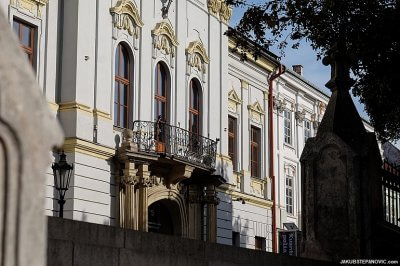 I slowly but surely made my way to the train station, where I wanted to purchase a train ticket back to Bratislava. However, I didn't manage. As I arrived, a surprising amount of people stood in front of the station. It looked more like a crowd gathering in front of a venue than a usual transportation hub. As I got closer, I discovered that the station's perimeter was wrapped by police tape, behind which were people in uniforms. I approached one, and as it turned out, someone reported a bomb in the station. Now, an anti-bomb-squad searched the property. 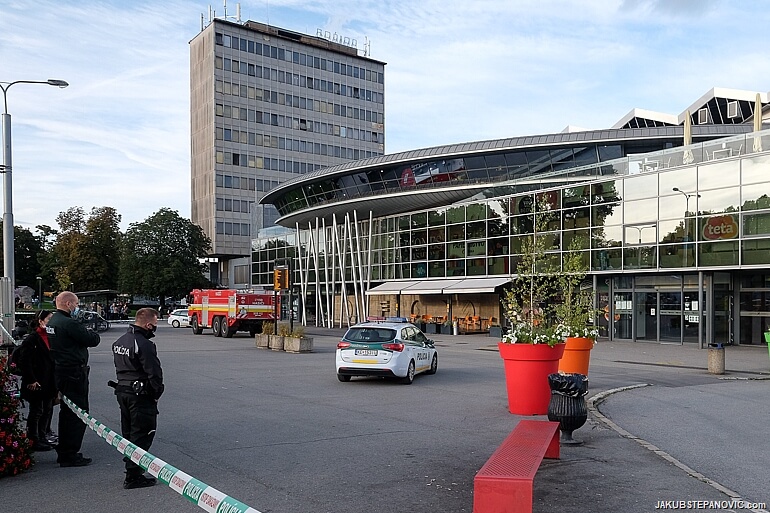 "Take the bus," the policeman said. I thanked him for the advice but thought, "no way!" Kosice is some 450 km from Bratislava, and in theory, it is some 5-hrs drive. In practice, though, I heard that possibilities that you run into a traffic jam or two on the way are nearly certain; therefore, that travelling time can only grow. I am biased because I am over 6ft tall, but being stuck in a coach for such a long period is something I feel too old for already. Or I simply can't be bothered anymore. Pick whichever.

I didn't let this unexpected diversion spoil the day, though. Just outside the station is a good-sized park, and at its other end is Kosice's Art Hall. It is a former indoor swimming pool rebuilt into a contemporary art gallery, a place which I thought would be nice to visit. Alas, it was closed too. No bomb this time, and no explanation either. I got there well before their closing hour, but no luck. Ah well. 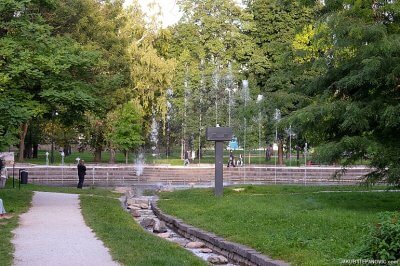 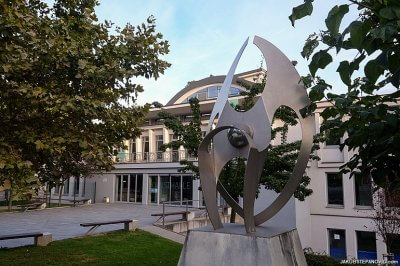 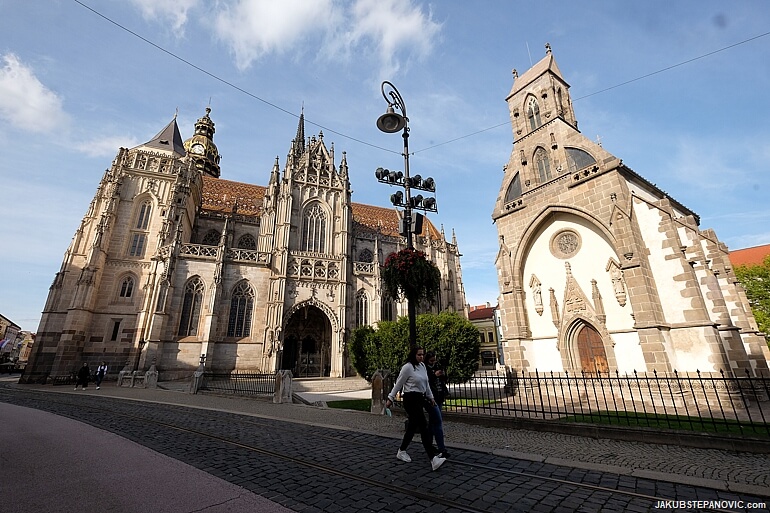 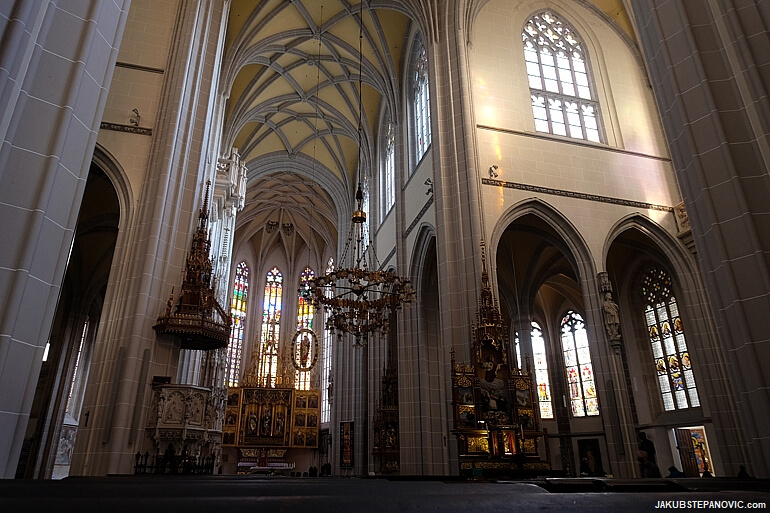 One of the cathedral's towers, Sigismund's, is open to the public, and it proved to be the city's highlight. Even before one reaches the top, they can admire some cool details. 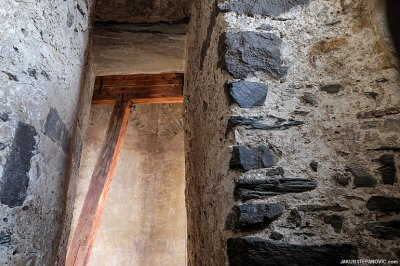 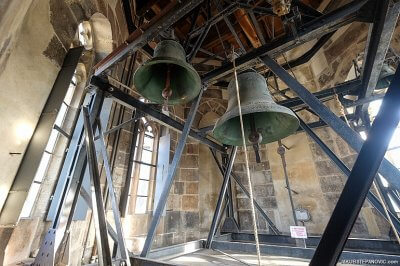 And then, once you climb up, the 360-degree view reveals additional gems of the city. 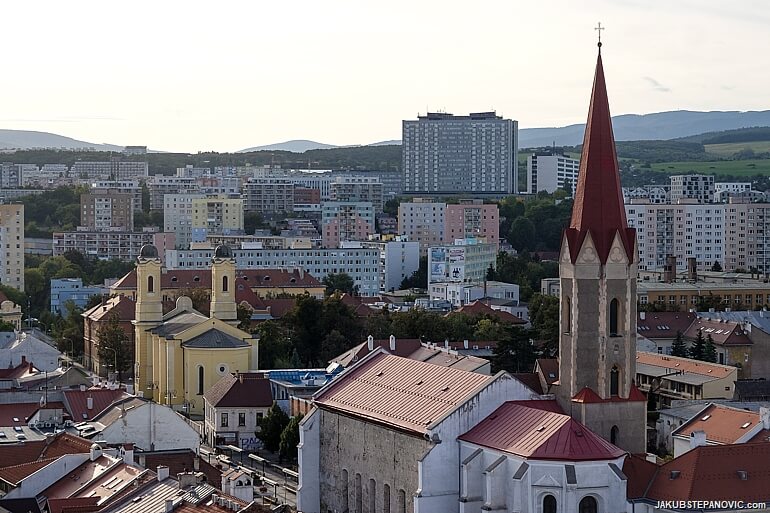 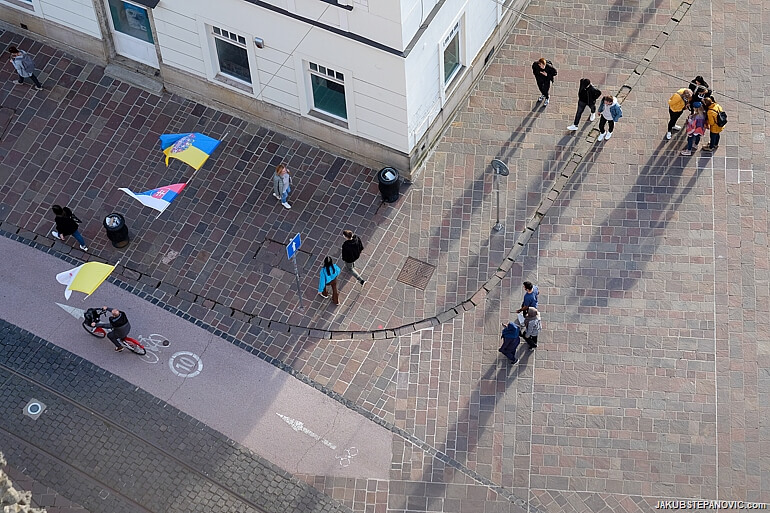 By chance, the pope visited Kosice about a week before me, and the Vatican flags still decorated the city.

After admiring the outlooks for a while, I commenced the descent. This shouldn't be worthy of mention, but walking down the stairs' high gradient served as a rather painful reminder that I broke my knee some time ago. Ouch! At least, the spiral part of the stairs brought back good memories I made in Wroclaw, where I used a similar staircase to create visuals for one of my audio pieces. The stairs in Kosice is steeper and narrower, though. 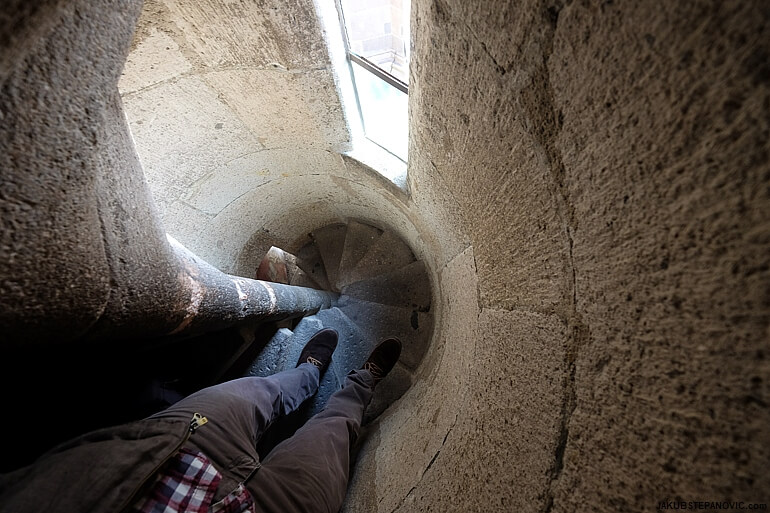 Once back on the ground, I explored more of the interesting streets the city centre has. 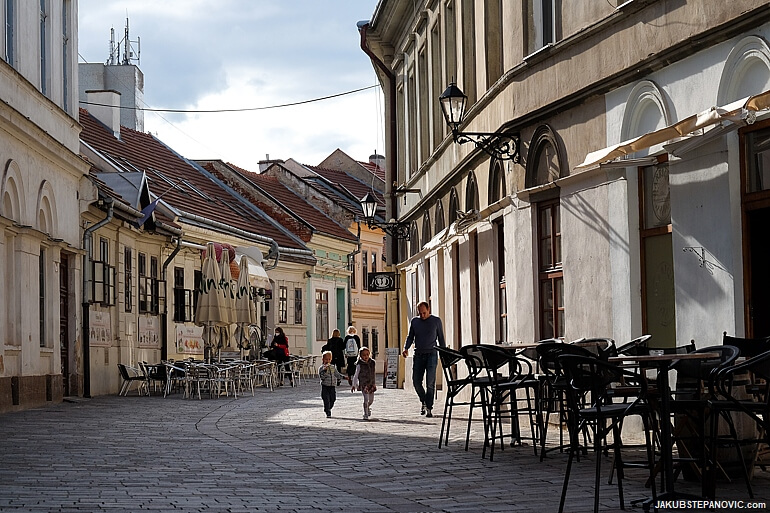 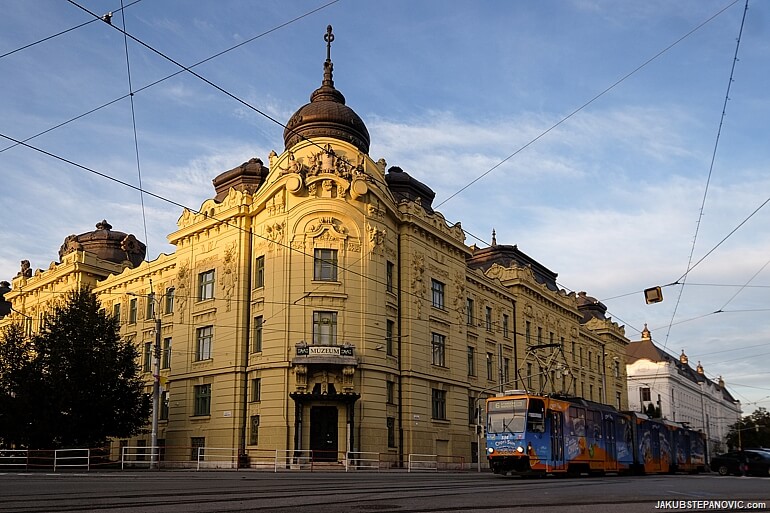 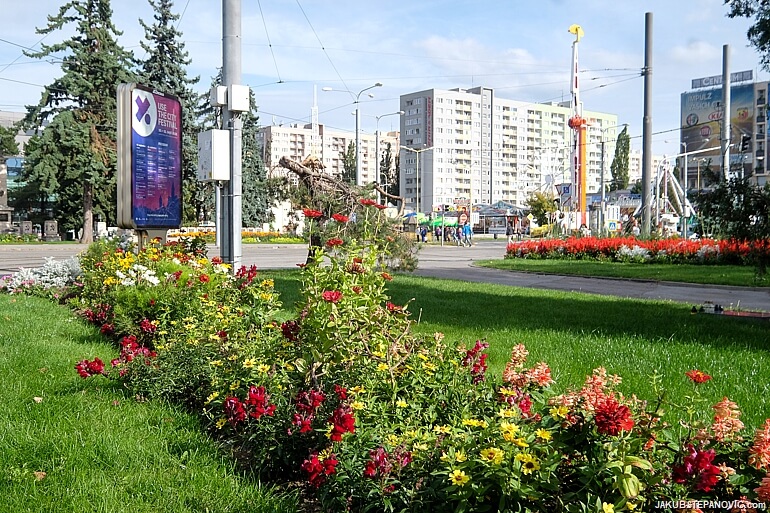 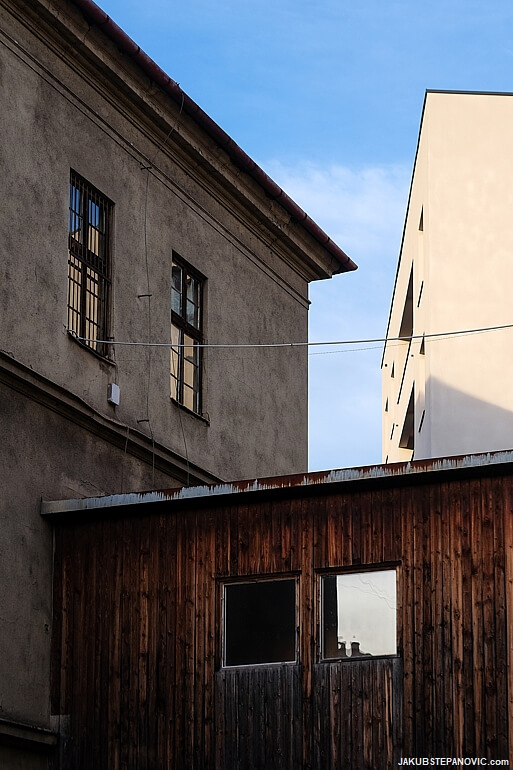 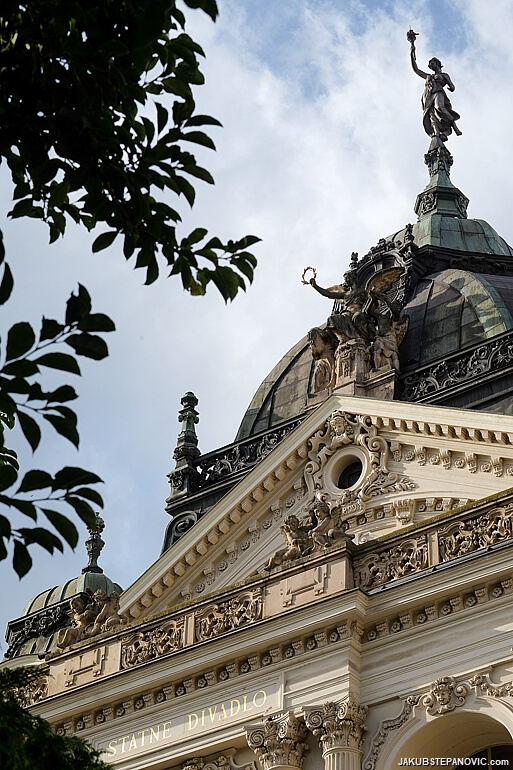 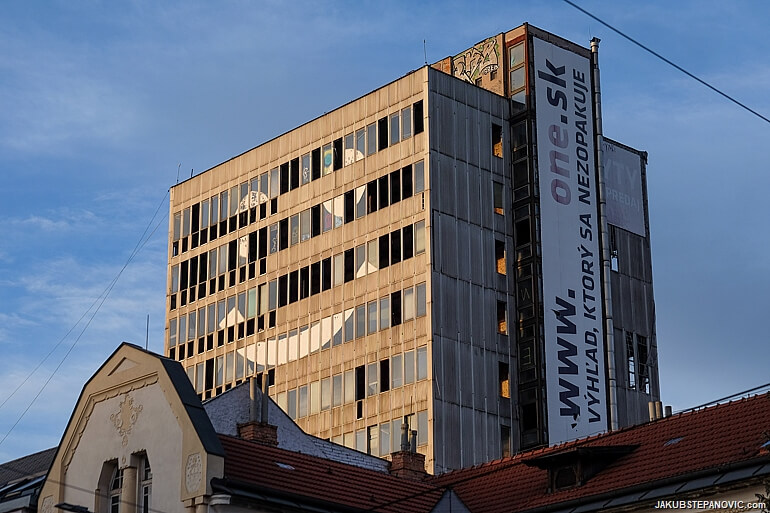 Out of other features I liked, the city's green spaces that I saw were up kept, and that the cycling infrastructure is developed and used. The place also has plenty of neat fountains: 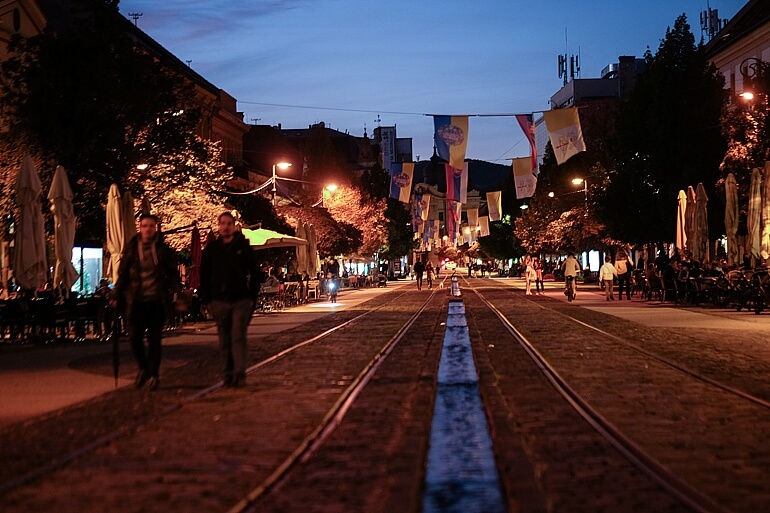 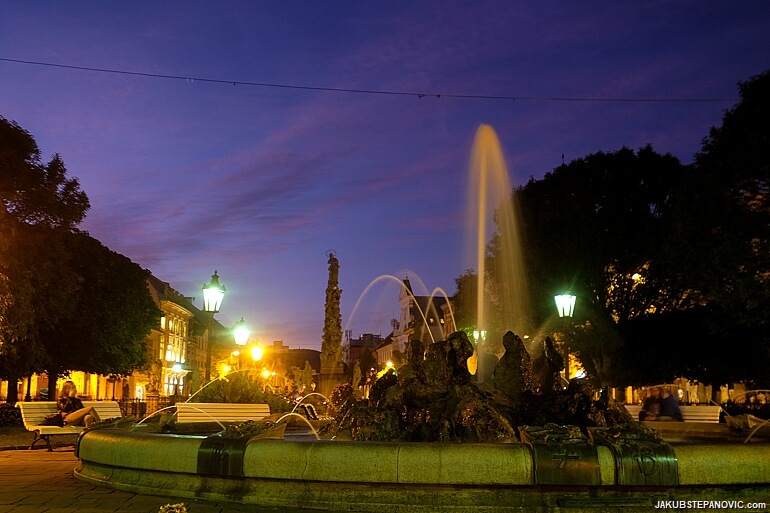 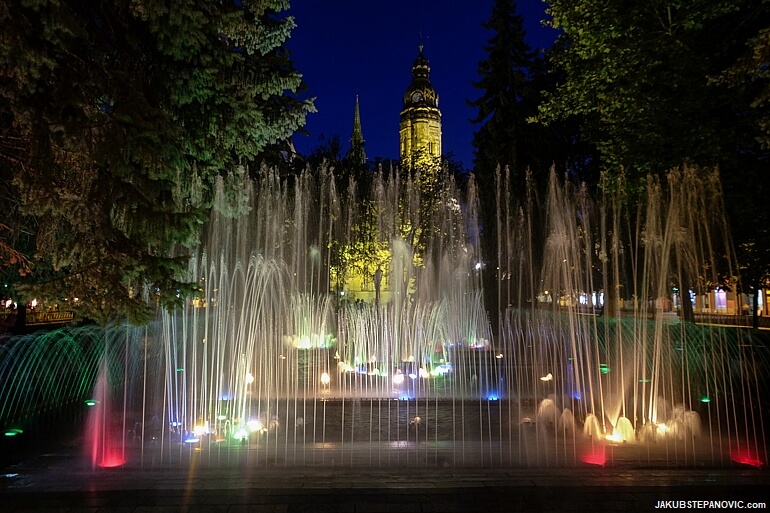 The declining light reminded me that I still had no way to get home or accommodation where I could potentially stay. So, I sat down to assess the situation. I couldn't get a flight on that day, I wasn't keen on the buses, so I ended booking a train connection leaving at around 11 pm. I figured that by that time, police would already confirm that the bomb was some idiot's joke, or the station would be blown to pieces. Counting my chances, I bought the ticket; and indeed, all was well. Moreover, I still had time before boarding the train to have dinner with friends, which was a fantastic conclusion to a pleasant visit.