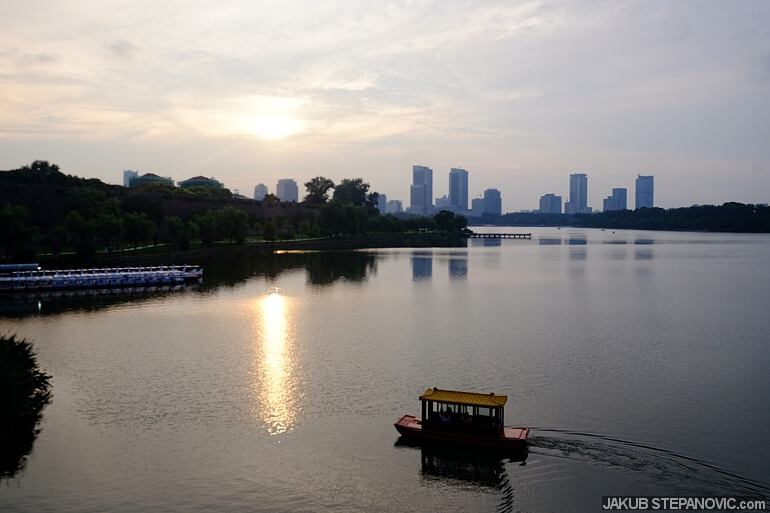 At the beginning of July, I spent three nights in Nanjing – Chinese former capital city with a rich history and vibrant present. While I had some scheduled events to attend, it left me plenty of space to do some sightseeing.

Travelling from Shanghai, my journey began at the Hongqiao station... 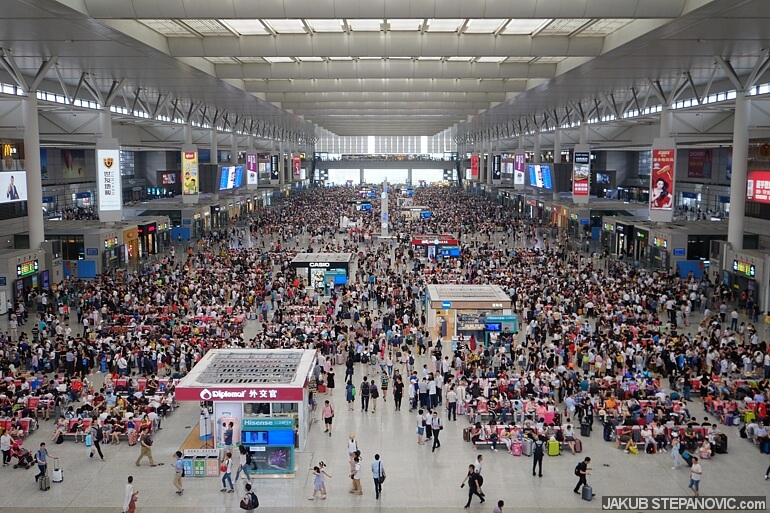 Can you count the heads?

..which offers CRH (China Railway High-speed) connections to major Chinese cities such as Beijing, Wuhan, Guangzhou, and such. Well, and as Nanjing is on the route, I got to experience it: 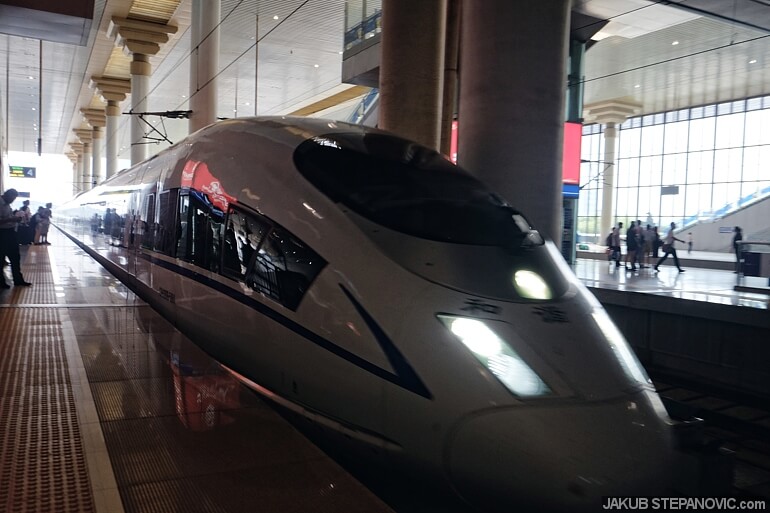 While the railroad was designed for speed up to 380kph / 236mph, the train I took had a cruising speed of 305kph / 190mph. Still, that's the fastest train I have taken up to date. The distance between Shanghai - Nanjing is roughly 300km / 186mi, and the train did it in under an hour and a half, even with some stops on the way.

At the point I had free time, it was an evening already. The sun was beyond layers of clouds and smog, and it was clear that soon it will be behind the horizon as well. But it wouldn't be me if I'd just stayed in my room doing nothing. Speaking of the room, it was on the 20th floor, offering a fab view of the surroundings. I didn't have any points of interest prepared in this neighbourhood, but looking through my window, I noticed an unusual building... 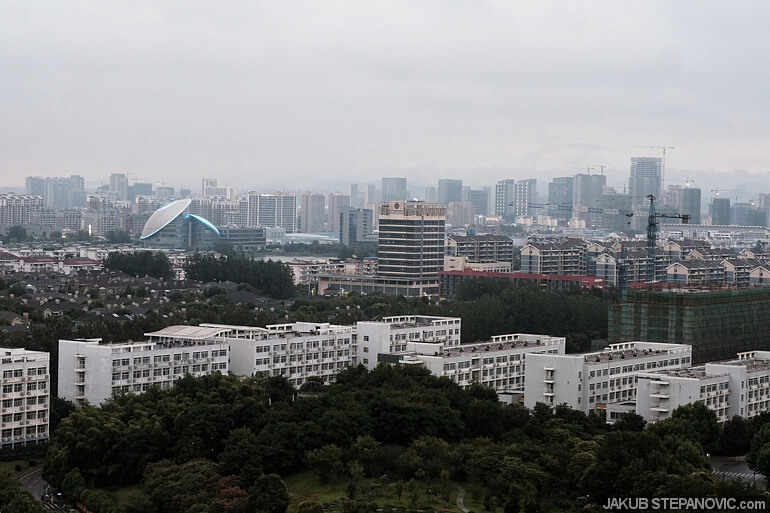 That two blue dishes in the left half.

So, I decided to take a closer look at it. Nanjing has the same convenient bike-sharing scheme as Shanghai, so I just hopped on one and cycled towards the building, where I arrived before complete darkness. 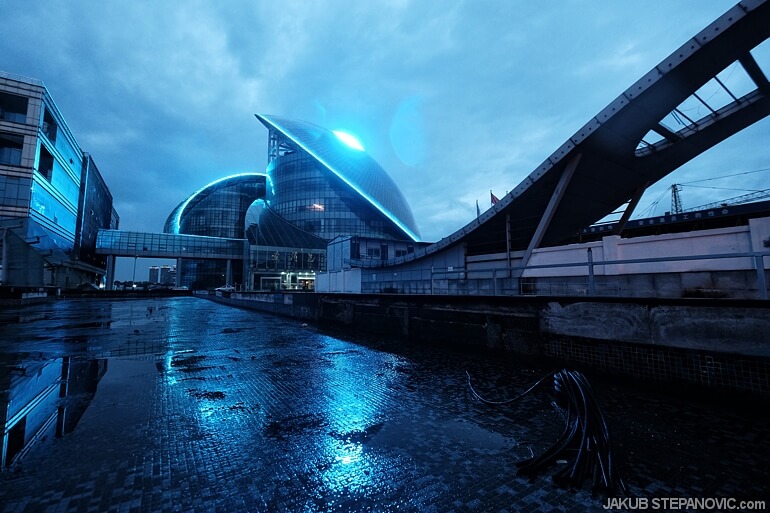 ..And it was a good call. I don't know its purpose, but the futuristic environment lighted by the strong blue lights created an impression of some Hollywood production set. Fun stuff! 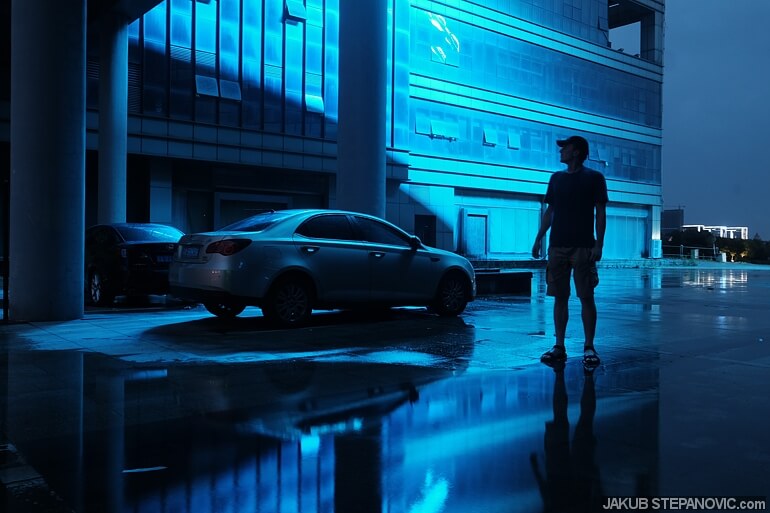 At this time, excitement overweighed tiredness, so I wanted to cycle further into the city. Looking at a map, I saw a few lakes nearby. "That could be worth checking out," I thought.. 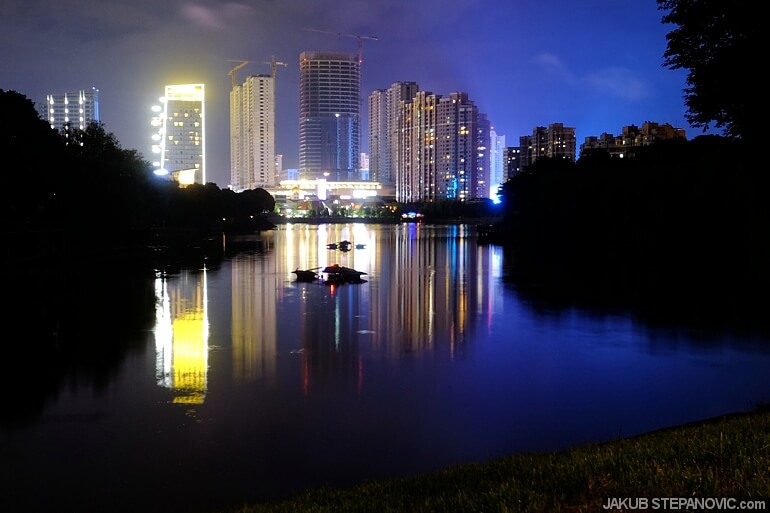 ..and as it turned out, I stumbled upon one of Nanjing's nightlife areas. 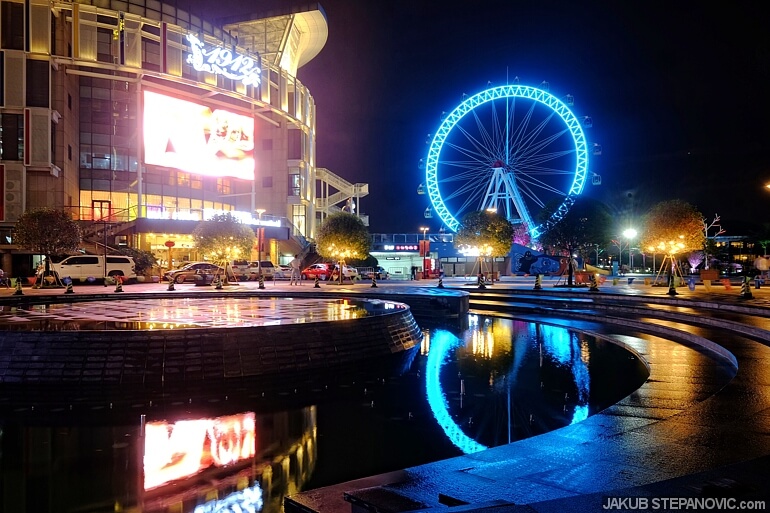 Ha, might as well make some use of it.. 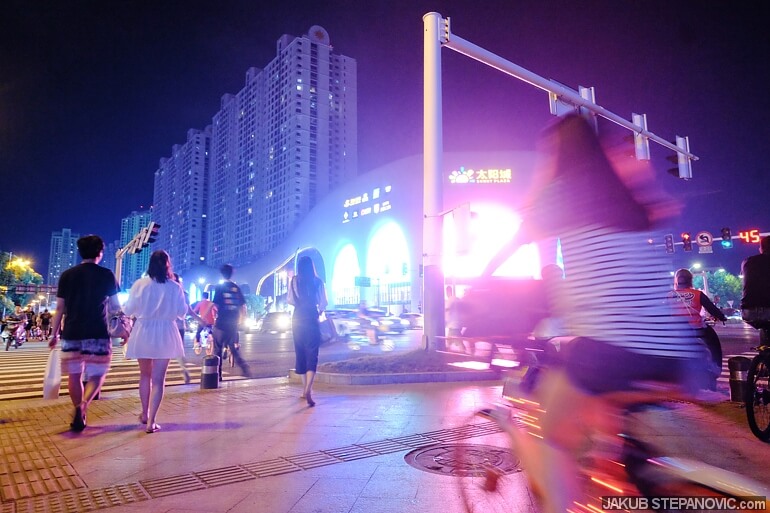 The next day I had free to do some sightseeing and started with the Sun Yat-sen Mausoleum. No matter the rain, the place was full to bursting: 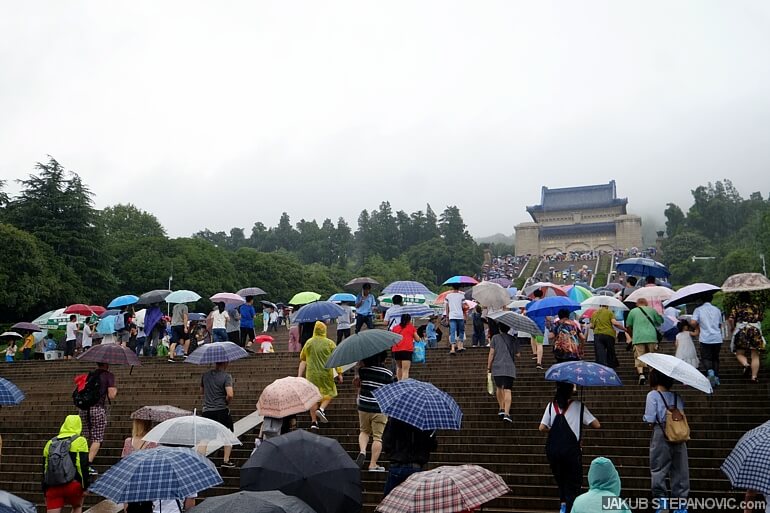 Sun Yat-sen was the founding father and the first president of the Republic of China, and so folks from all over the country come here to learn bits and pieces about history. Thanks to an English audio guide, that's what I did too, and I had a good time regardless.

My next stop also had a historical significance: I went to see Nanjing's Confucian temple. 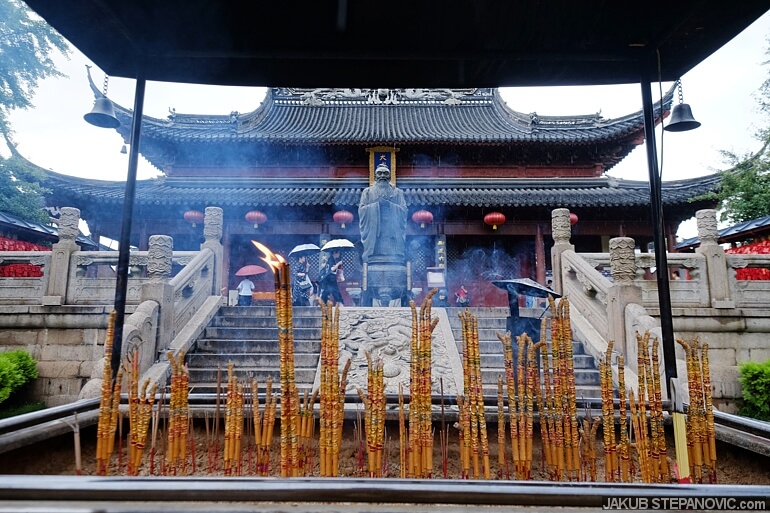 I have read some Confucianism basics a few years back, but seeing a massive building dedicated to it took it to a new level.

This place wasn't nearly as crowded as the previous one. It allowed me to slow down and enjoy the architecture and the indoor collection of old writings. The rain was still going on. 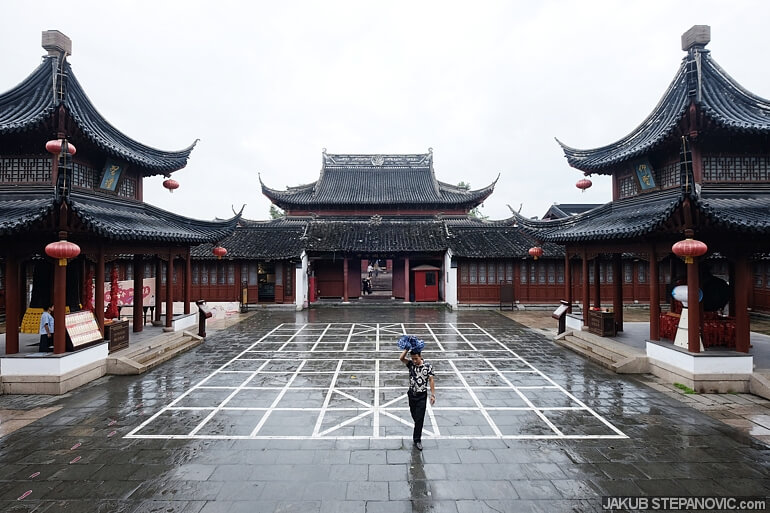 The grid on the floor is a chessboard of a Chinese version of the game. Thanks to a friendly local, I was able to learn its rules.

They also had an exhibition about the importance of education there; in fact, there was a class happening at the moment, which was interesting to observe. 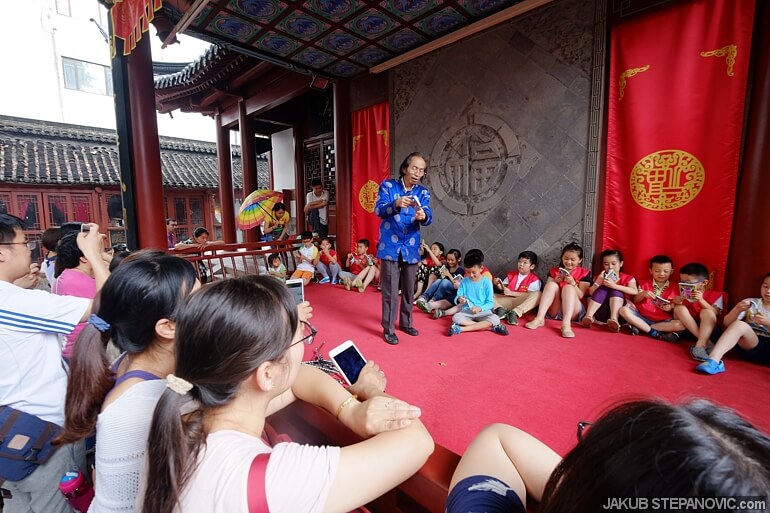 Then I moved towards the present age, as I biked across the central business district... 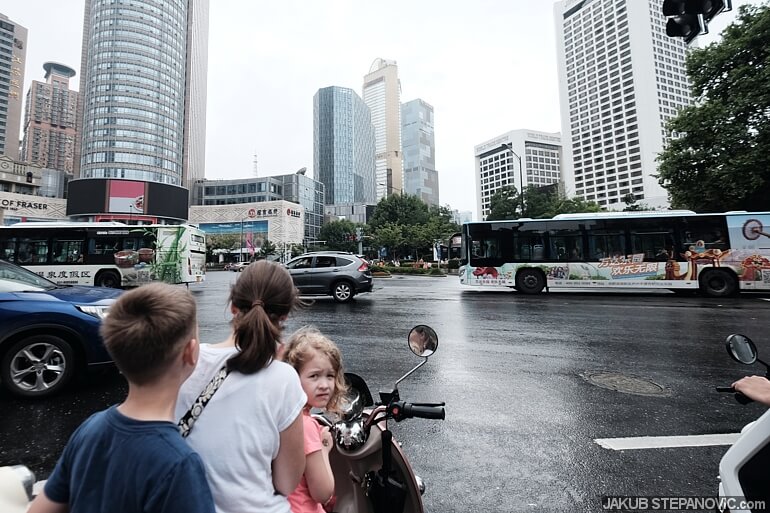 ...to one of the city's parks. I went mostly without a map, just following a cardinal direction. This meant to get through a tangle of streets, some shiny, some not – but cool either way. 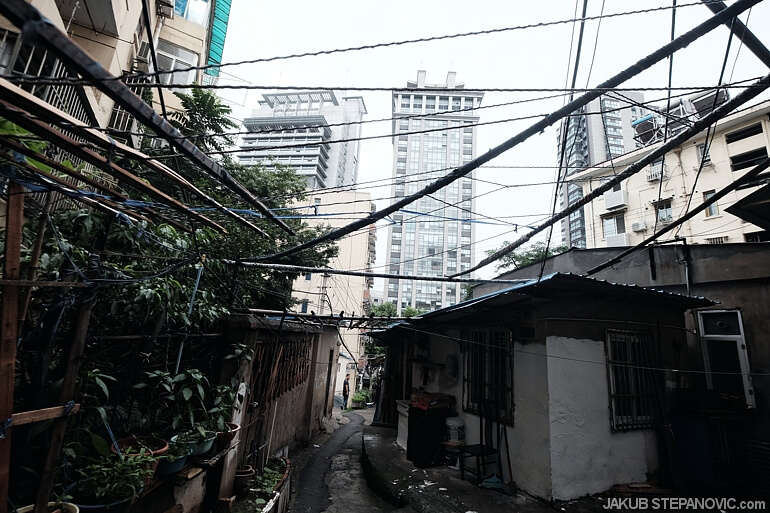 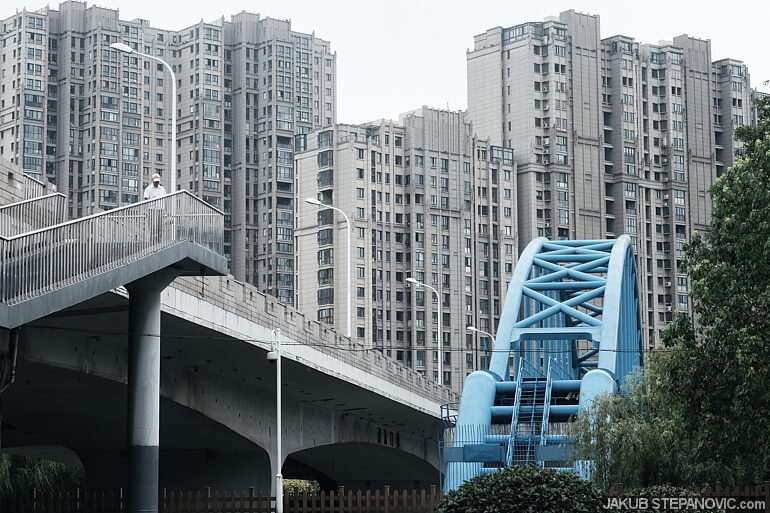 The mentioned park I headed to is called Nanjing Stone City Park, as it contains an old city wall from the Ming dynasty. 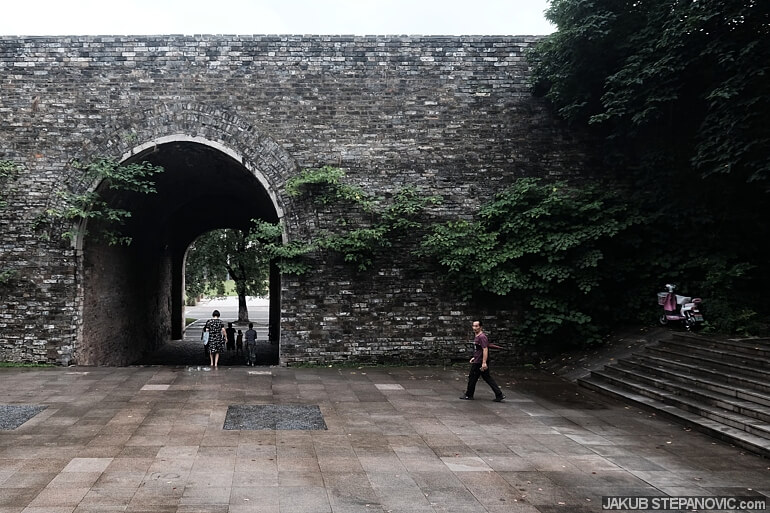 Qingliang Gate, one of the 13 original entrances to the city.

Although the wall was the reason I wanted to visit the park, it offered more than that. 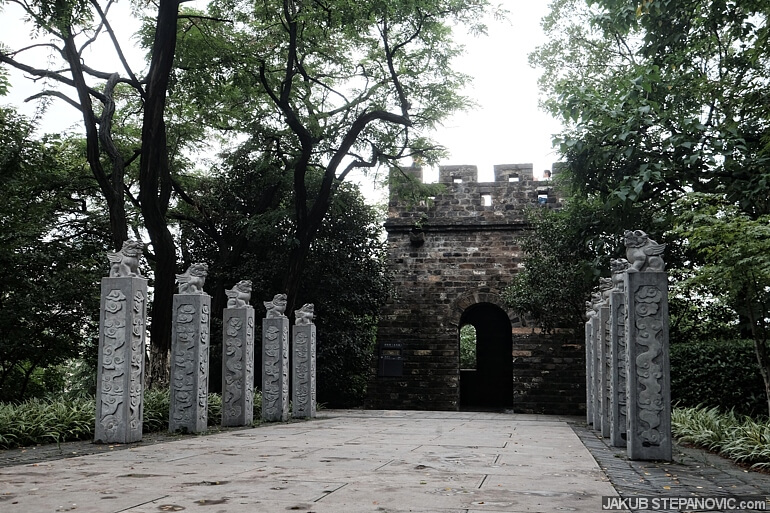 Besides a nice forest area, there's also a national defence park with military equipment on display. 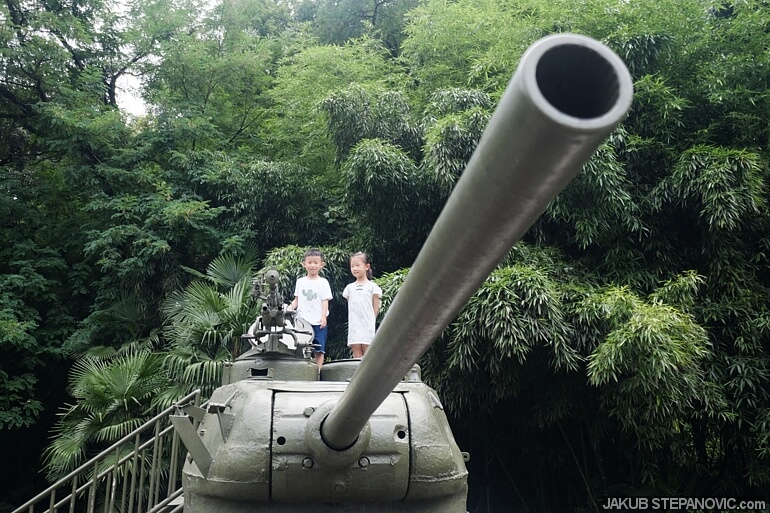 Not too far from the park is the Zijin Tower, where I planned to end my day. 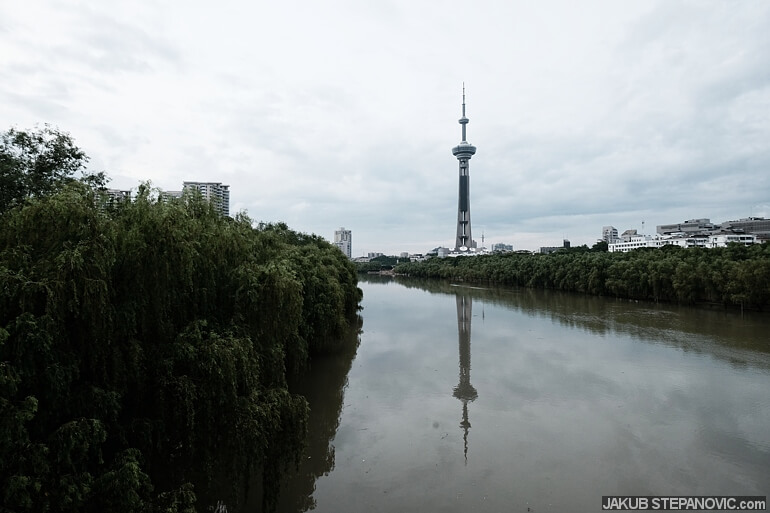 But before getting there, I went by Jiajiang River, where I stopped to check out an ancient dockyard, recently rebuilt into a park. Inside is a 1:1 replica of a treasure ship used by China's famous marine explorer, Zheng He, on his journeys in the 15th century. 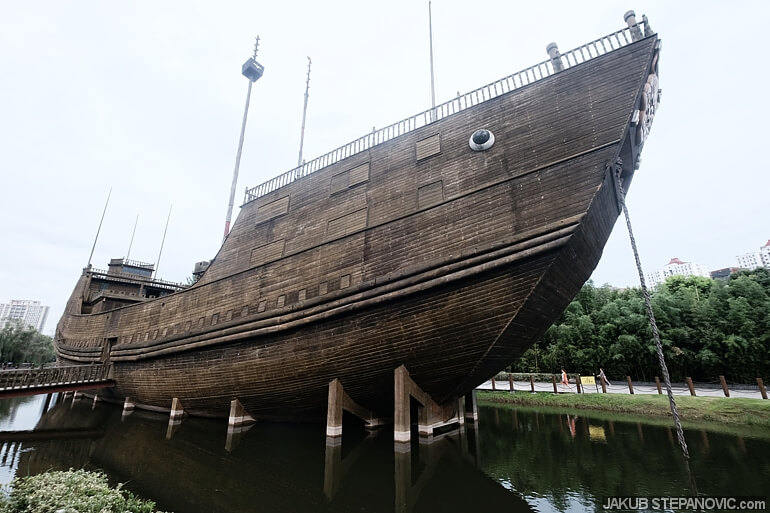 The original ship was built in these shipyards.

At this stage, the day was approaching its end, and I returned to the Zijin Tower, with plans to enjoy the dusk from a excellent vantage point. 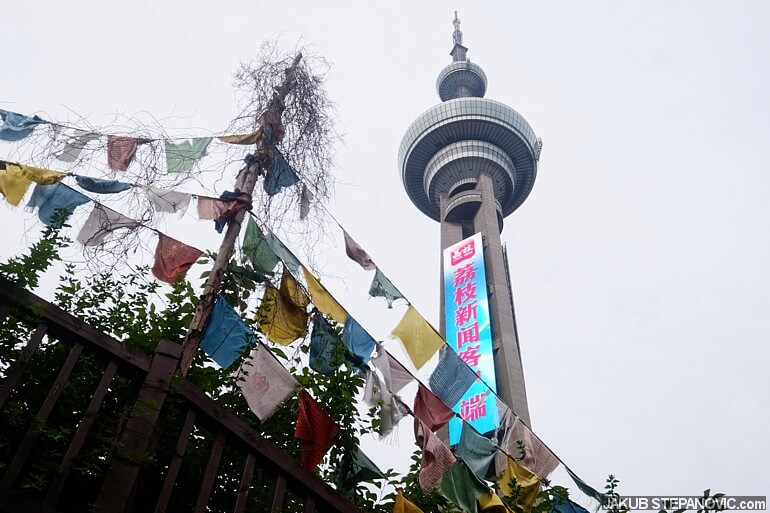 However, what I got instead was a disappointment. Nobody around, the tower was closed.

The third day of my stay was busy, but I used my lunch break to see Wulongtan Park and the Buddhist temple in Qingliangshan Park. 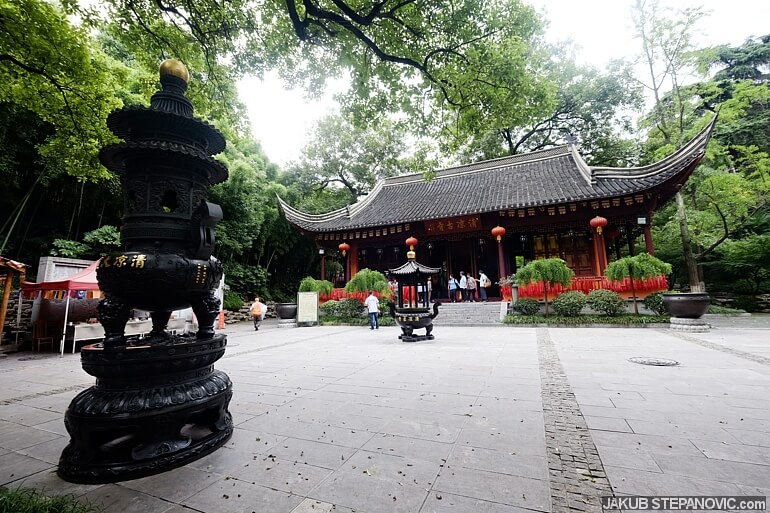 I went by another temple once I finished my afternoon program, but it was already after hours, so I went to see Xuanwu Lake as an alternative. 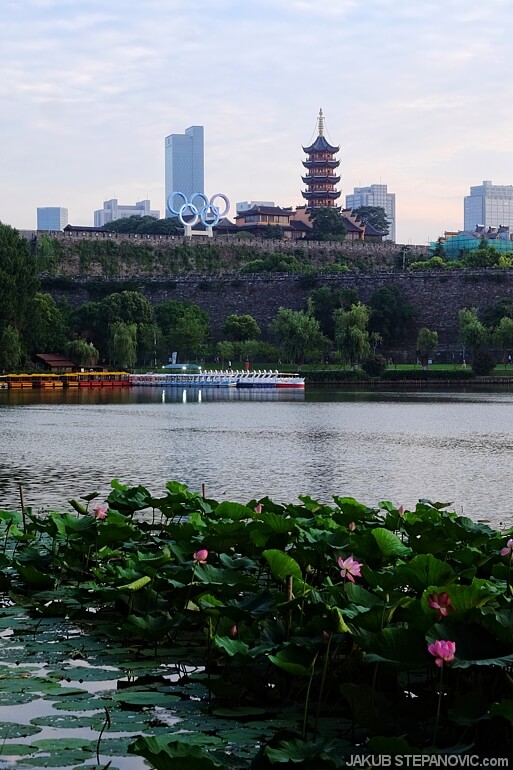 Unlike yesterday, the weather was good, and it was clear that a pretty sunset would follow. I was still keen about the idea of getting somewhere with a good view, so after the fiasco with the Zijin Tower, I prepared a replacement: 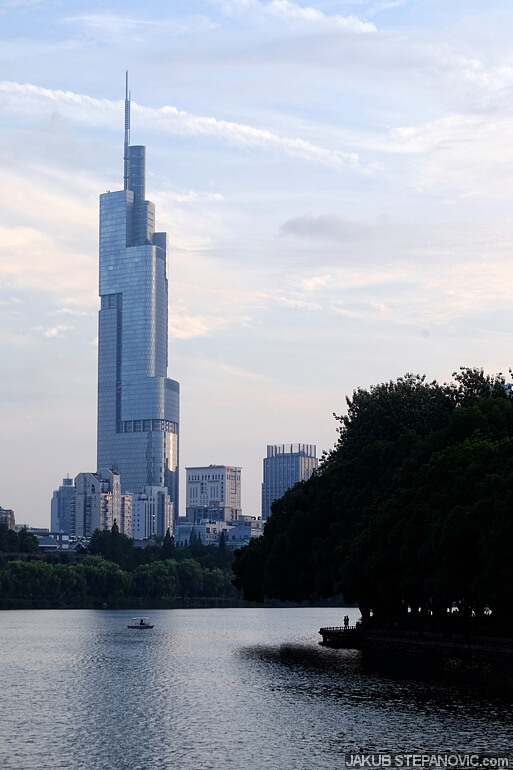 That was my next plan. However, in the park, I got into an interesting conversation with a local lady about the pros and cons of the eastern and western worlds, and so it happened that I missed the sunset. But I didn't give up and went up the skyscraper anyway. And I am glad I did. 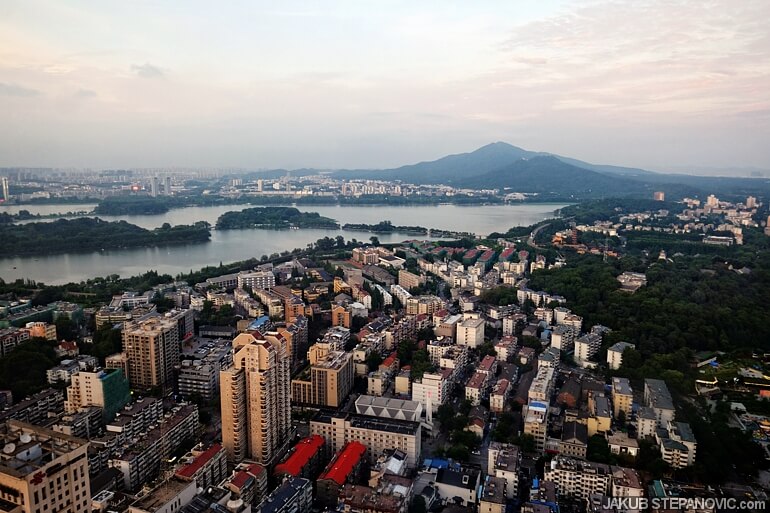 The Xuanwu Lake with the Purple Mountain in the background. 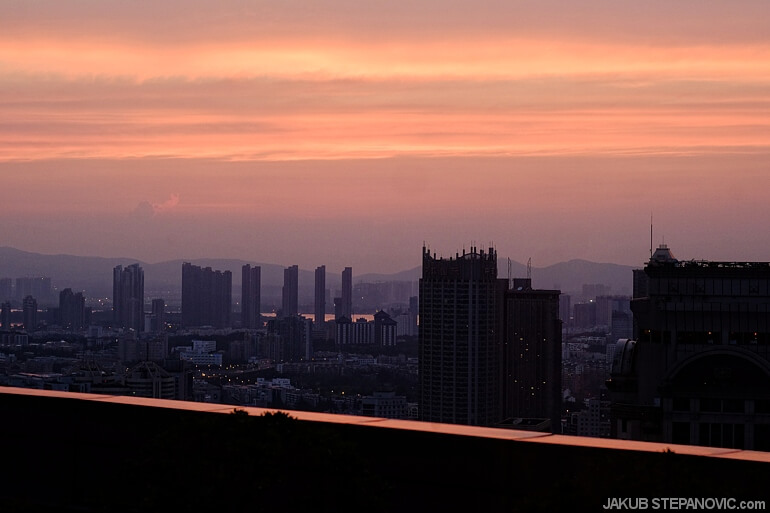 While the sun was gone already, the colors were still top. 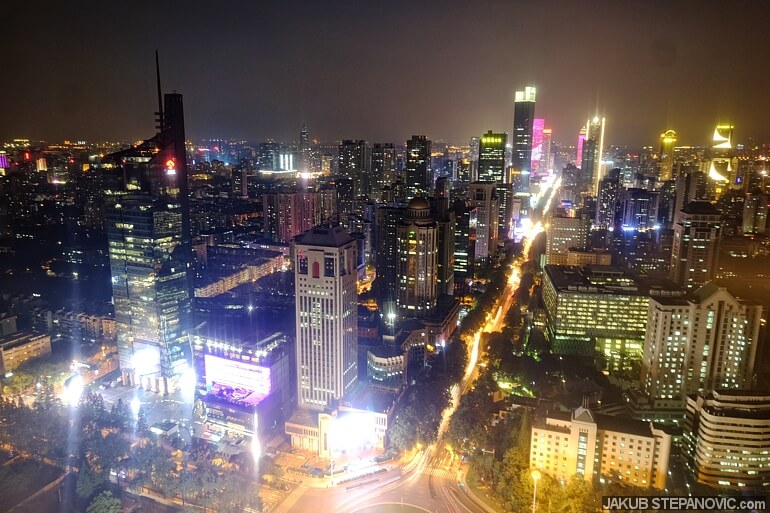 This was a dignified way to say goodbye to the city, as the only thing I saw in Nanjing the next day was its railway station on my departure. 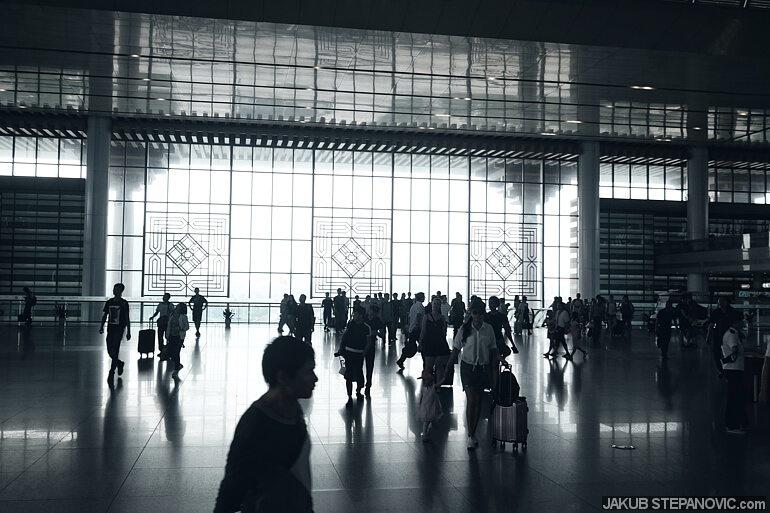 See my other articles about China, or browse my Blog Archives for more topics and places. Thanks for reading!

Hi, really awesome photos, giving me another view of Nanjing. I never thought Nanjing could be so beautiful. Admire your gift for pictures.
It’s a pity that there wasn’t more free time for you to explore, otherwise, you could visit more scenery spots and take more pictures.
If possible, hope that we can play the chess once again. Guess you can teach me the European version. haha..