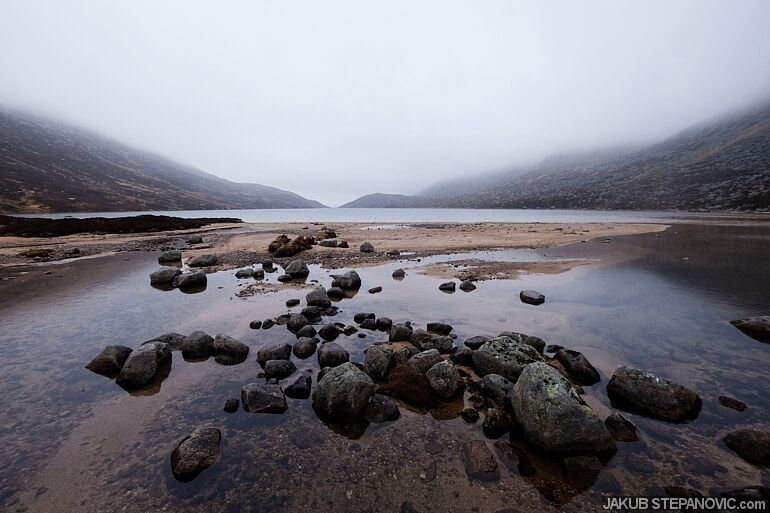 Escaping civilization in a solo hike around three remote lochs in the Cairngorms.

The initial plan was to hike to Loch Muick, a good-sized lake in Scotland's Cairngorms National Park, and continue up the high plateau to enjoy views on surrounding mountains. However, unpredictable spring weather brought heavy, low-hanging clouds, and I knew that the plateau outlooks won't be happening today. So, I looked on my map and came with an alternative that would allow staying below the clouds. There are two other lakes in the area where I never been before, so I opted to change that. 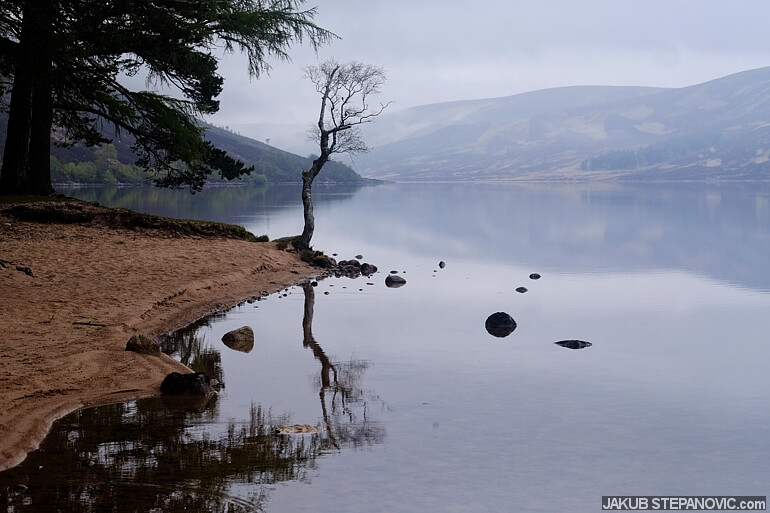 Loch Muick is in a pretty remote area. The nearest town is roughly ten miles away, and the closest public road ends about a mile from the lake. Combined with the fact that I went there out of season, I didn't see any humans all day. And while I went by myself, I wasn't alone: As I started the hike, I encountered pheasants, mountain hares, and a frog. 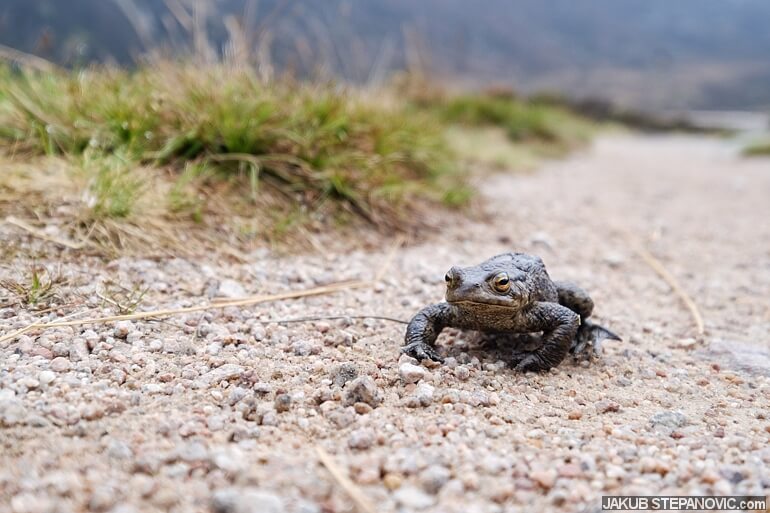 After I passed a pretty pine forest... 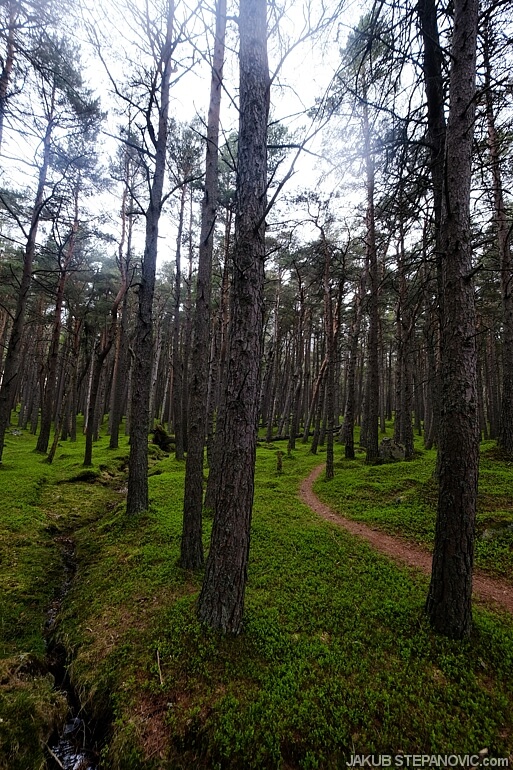 ..the trail gradually started going uphill. The air was fresh, and it felt good. 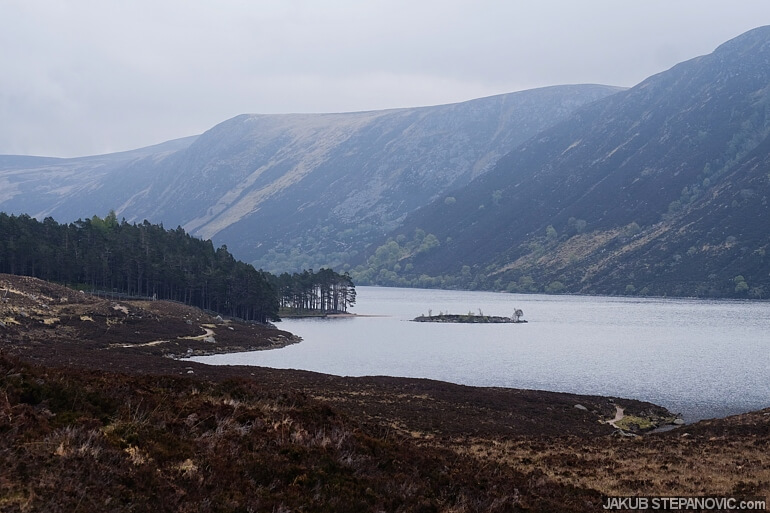 every now and then, solitude is good.

While there's a trail that links Loch Muick with one of the other lakes I wanted to see, there isn't a path to the second one, Buidhe. So, I had to make my own. 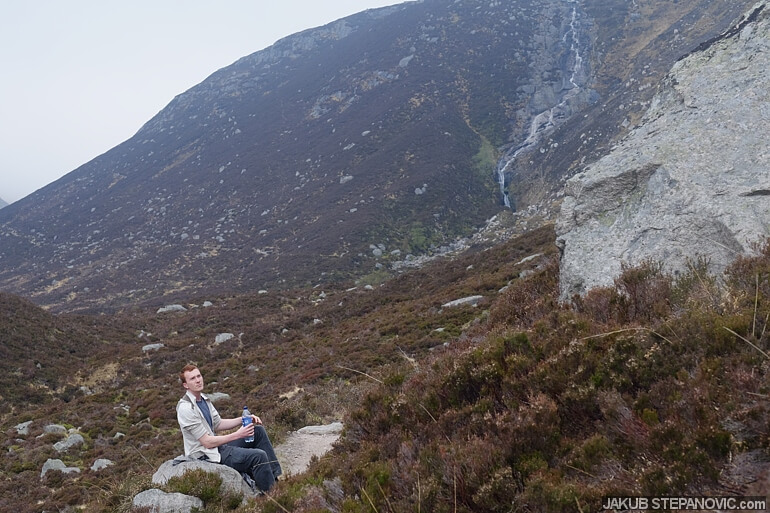 every now and then, a selfie is not a sin

Buidhe sits upstream of one of the rivers the trail passes, hence I started following the stream to get there. 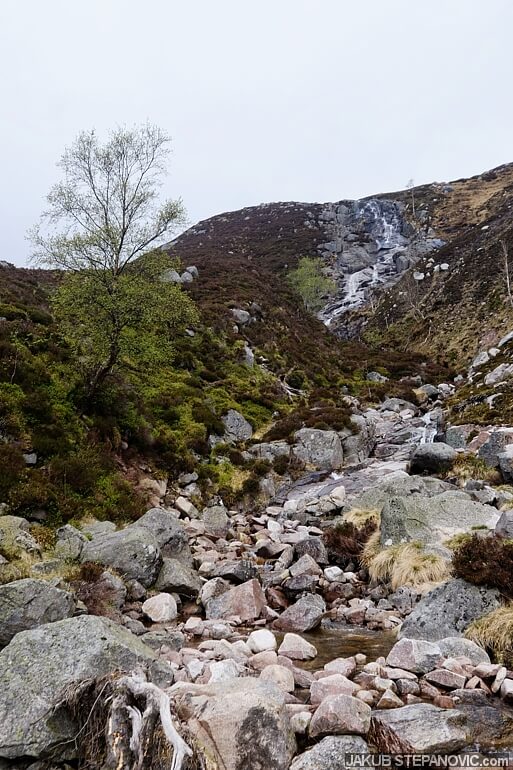 The river features a large, neat waterfall, which meant a bit of scrambling up. This was a fun diversion; I was in no rush, taking up a terrain that suited my comfort zone and enjoyed the outdoors. 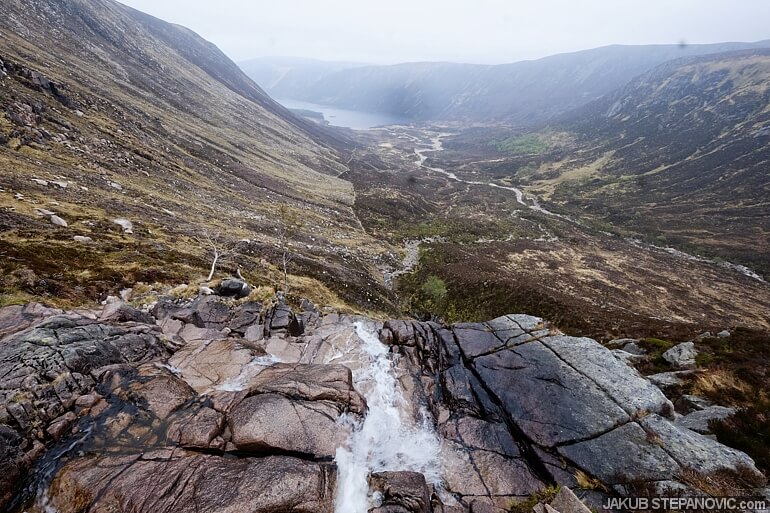 Standing on the top of the waterfall.

When I reached the top, it started raining. But instead of being upset, I was grateful that the rain didn't start earlier, as that would make the climb harder. "Good timing," I thought and went to check out the loch. Nevermind the rain, it was a scenic area to enjoy. 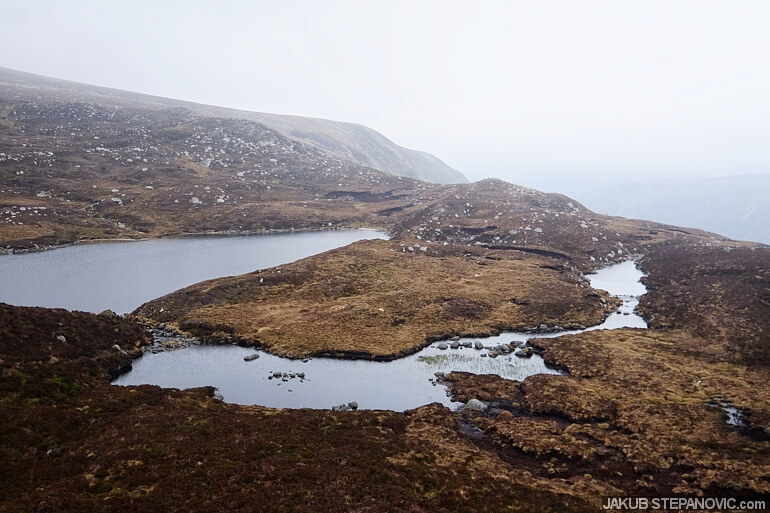 Later on, I followed the valley leading to the last lake of the hike, the Allt an Dubh. The rain quit, and I noticed deer footprints all over the place. 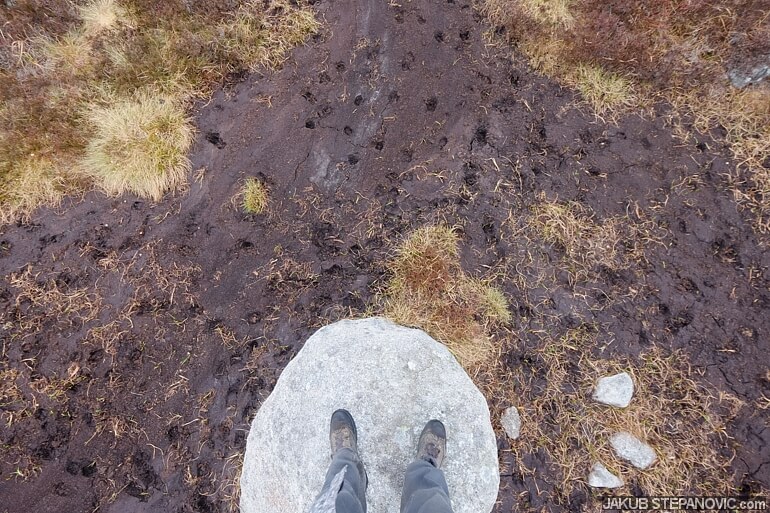 I wondered if I could spot a deer or two, and the question got an answer in no time. Looking across the hills, I noticed some motion in between rocks and heather. After focusing, I recognized a few outlines of those majestic animals. Their fur blended with the surroundings like a high-tech camouflage. The herd started walking, and suddenly I realized what I had in front of me. There were dozens of them! And as they moved, it looked like the earth underwent a landslide. 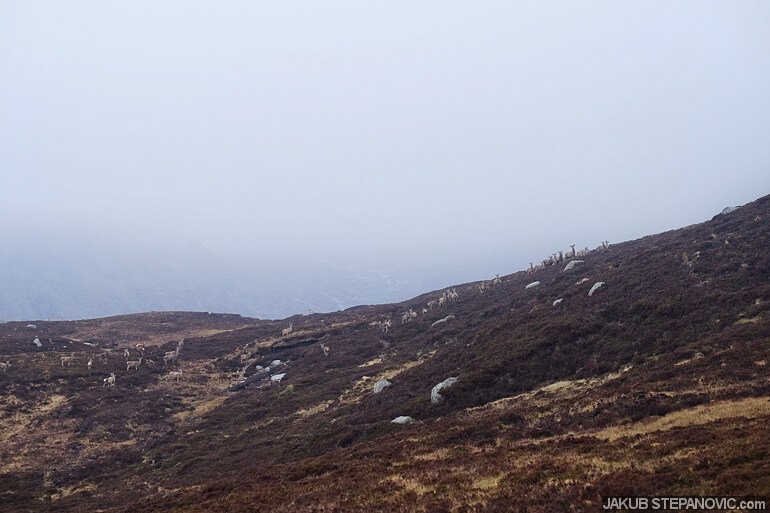 When they noticed me, they stopped, and for a few moments, we played a staring contest. 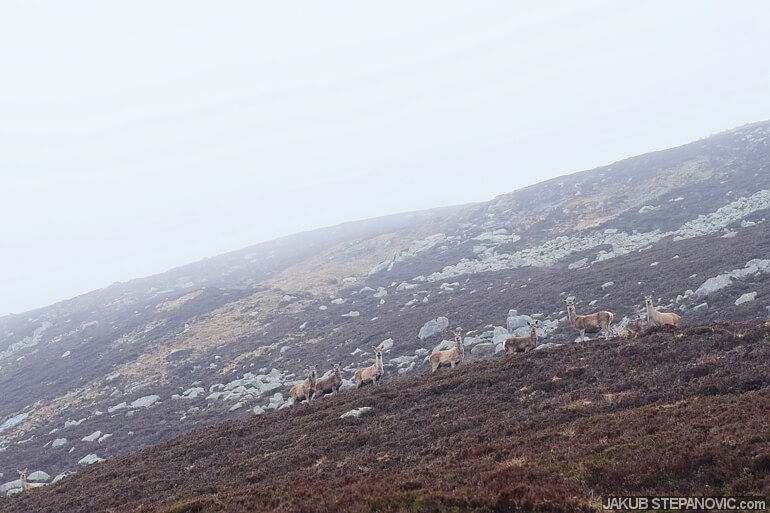 Then they ran away, and I was thrilled about this encounter. "This can't get much better," I thought, when a view on the last lake opened in front of me. 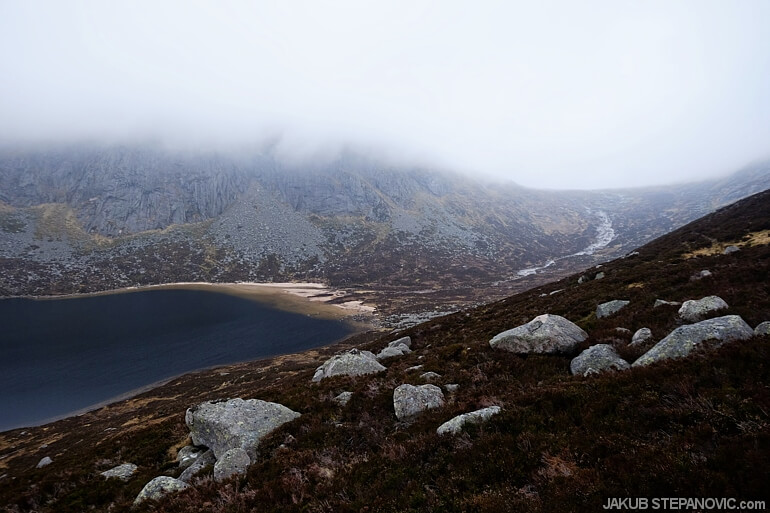 Allt an Dubh is surrounded by towering cliffs, which were obscured in the clouds that stagnated not too far from the water level. It created an impressive atmosphere. There is something special about nature in the fog, something appealing to me. It is like when a person can look more attractive with a wisely chosen dress than with one that's too revealing. The unknown triggers imagination and a sense of adventure. Scotland is soaked in this mysteriousness: think Loch Ness, and they even have a unicorn as their national animal. It leaves no place ordinary, fueling your colorful fantasy.

Here, I could only speculate how far those cliffs soar. 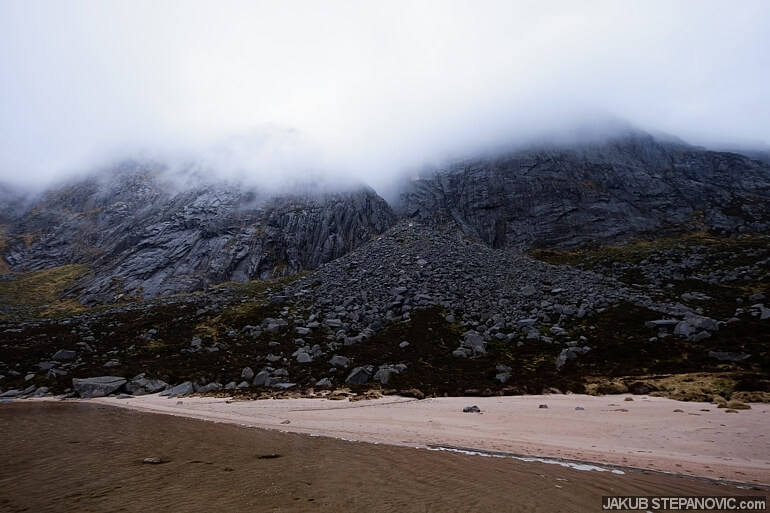 At the end of the loch is a sandy beach. If I would be to design a custom-made place for my lunch, I couldn't do it any better; it was fantastic. But to reach it, I had to ford a deep river. No bother, I thought, leaving my shoes and trousers behind. The stream was cold, yet easy to cross. And when I got out on the other side, the air felt suddenly warm. 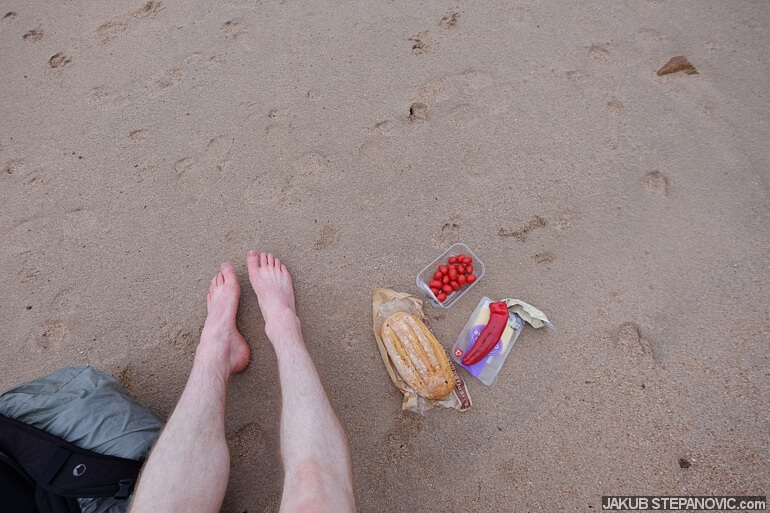 After lunch, I couldn't resist and jumped to the lake for a swim. It was properly freezing, so it didn't take long until I went back to the shore to layer up. Then, with a smile on my face, I started walking back to where I started. 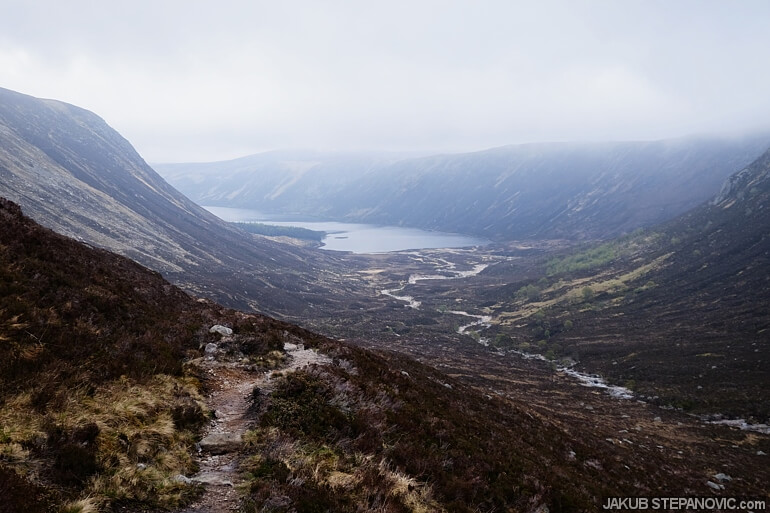 Another rain came in shortly; again, in good timing. I was full of happiness and a sense of freedom, which prevailed all the way home. Nature's ability to recharge me is beyond belief.

See my previous articles about the Scottish Highlands for more similar stories, such as: