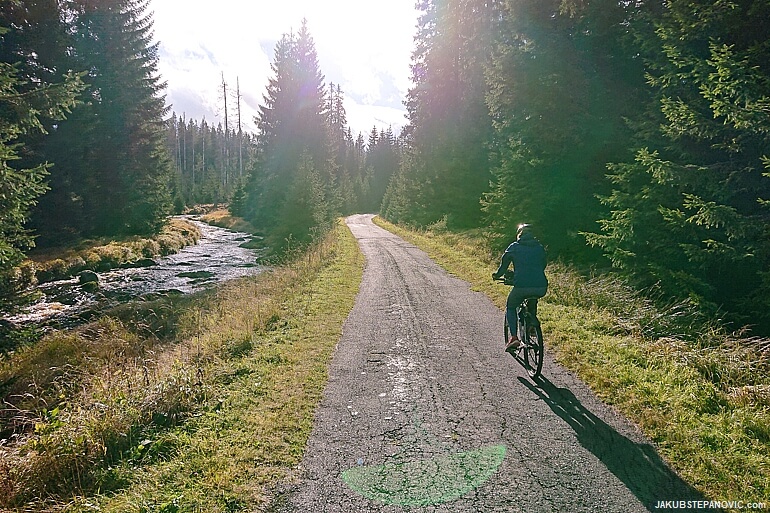 Located at southern Czechia's border with Germany, Sumava is one of Europe's oldest mountain ranges. As a result, the mountains are mostly rounded, with hardly any rocky, dramatic landscapes. Yet, the range has many interesting elements: it forms a major drainage divide between the North and Black Sea, and, perhaps, the most compelling aspect for me, it has the most contiguous area of forest in Central Europe. Besides occasional meadows and a few cities, trees go as far as one can see. 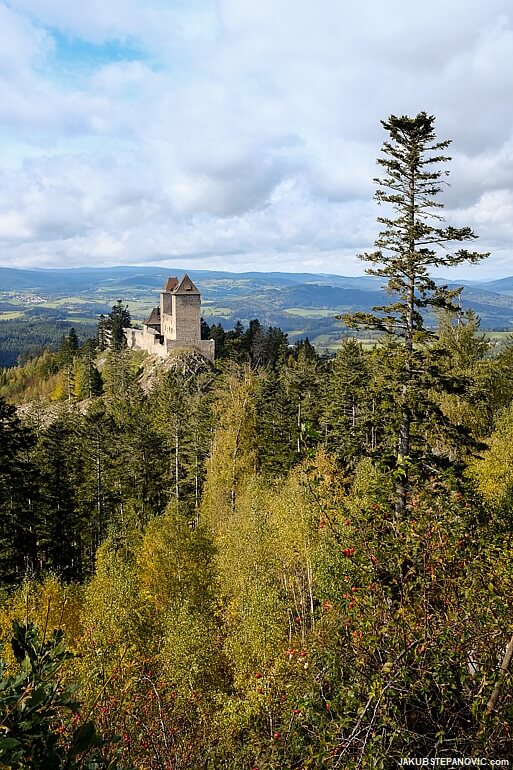 Overlooking the northern Sumava with Kasperk Castle from the 14th century.

There's something great about visiting the woods. Even scientific evidence proves that being around trees improves concentration and memory while lowers blood pressure and reduces stress — something I could use a lot this year! While the woodlands in Scotland are beautiful, they cannot match the density or scale of Sumava's forests. And so, when my friend suggested Sumava as the destination for a weekend getaway earlier this month, the goal was set. We set off to bike through its Czech portion, Bohemian Forest. 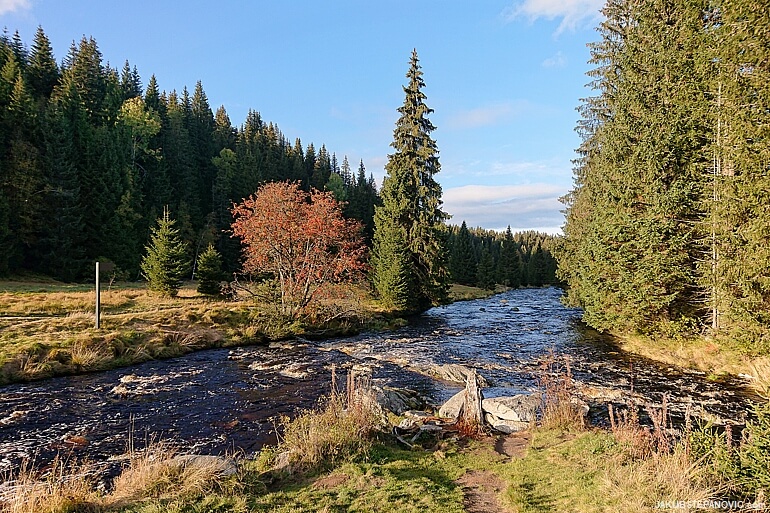 We arrived in Modrava, a village with a great location to explore the range. It was a cold but sunny evening, so before heading to bed, we followed Vydra River to look around and to stretch a bit after the travels.

The next morning was warmer, but dense greyness covered the sky — such is Autumn. Regardless, the trees growing from the moist ground made up for a rather neat set. 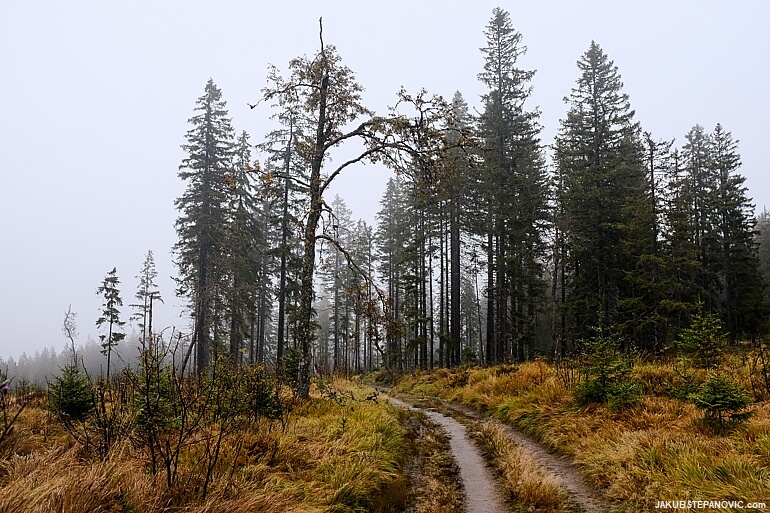 We hit the road to make a loop around a few boglands. 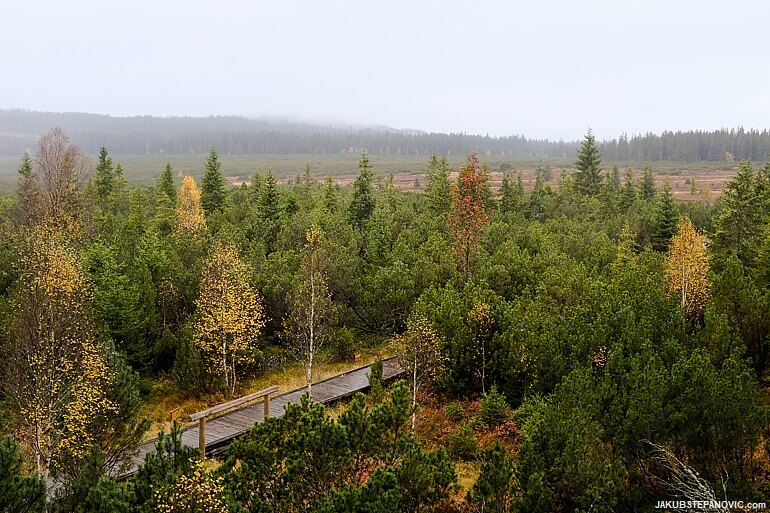 Jezerni Slat (which translates into something like Lake's bog). 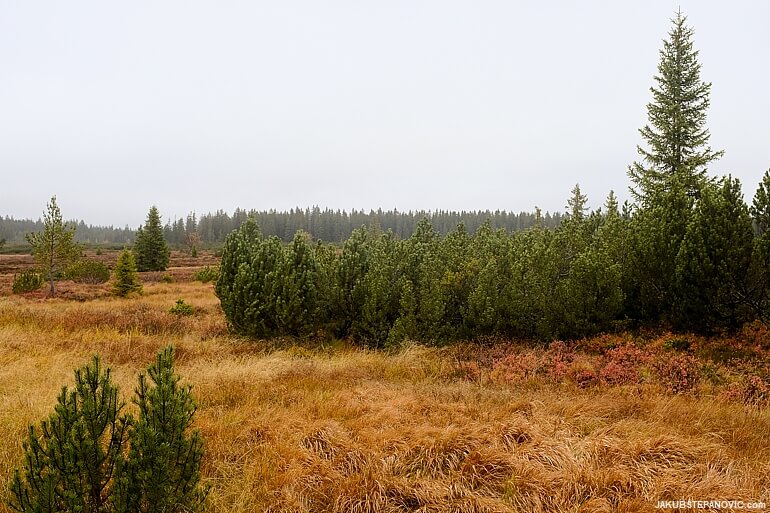 Sumava national park has quite strict use of land - people can go only on marked paths, some of which are even closed for cyclists. On the other hand, most of the paths are paved or gravel roads with a smooth surface. 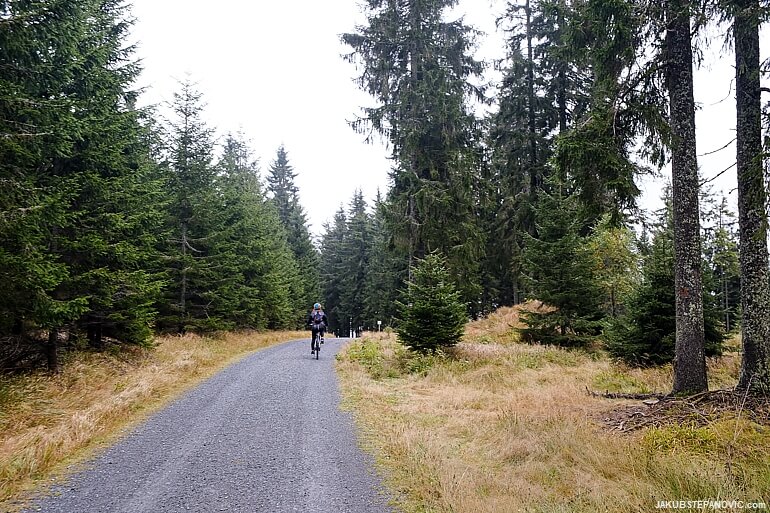 It's great for road cyclists, but I felt like the NP management forgot about us mountain bikers. The area could use more singletracks, which would even be less impacting the landscapes compared to the paved highways they constructed. But since I knew this fact beforehand, I brought semi-slick tyres, and enjoyed it anyway. 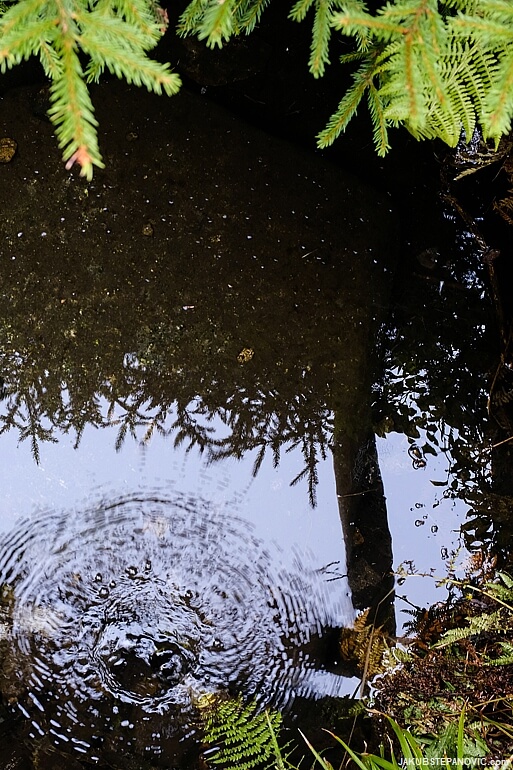 We stopped by the spring of Vltava, the longest river within the Czech Republic, and continued to the former village of Bucina. It is a few yards from the national borders, which used to be a part of the iron curtain during the cold war era. And here, a part of the curtain is reconstructed. 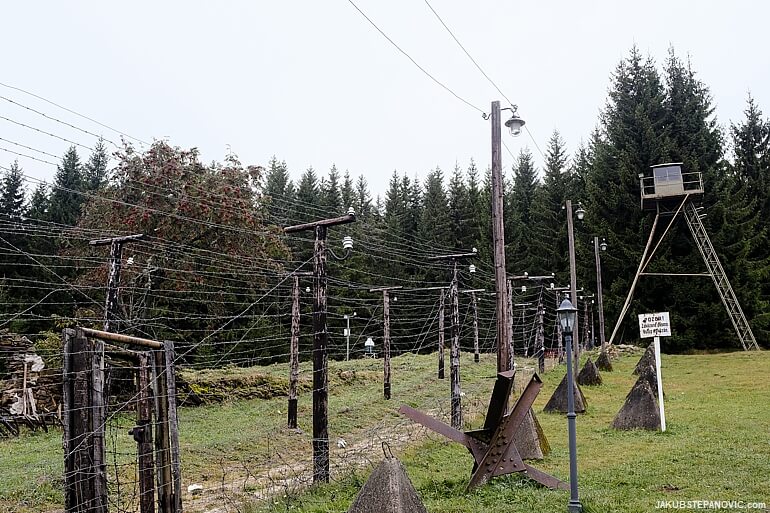 Looking at the gloomy scene brought an unexpected train of thoughts. On the one hand, it is mad to imagine that political powers established such isolation, and that it was was functioning here just a few decades ago. But on the other, the idea of rigid separation is still very much alive in many countries worldwide. Similar walls are being built as I write this, and some people celebrate them as the best thing for their country.

The cold war era isn't the only troubling part of the local history. Until the end of the second world war, this area was mostly populated by Germans. However, they got expelled from Czechoslovakia after the war, and many villages like Bucina effectively became ghost towns. Czechoslovakia repopulated other formerly German settlements, but as this area later turned into a forbidden zone, nature reclaimed most houses here. The artificial gap is still visible even without visiting the area in person. If you look at hiking maps of the range, the German part, Bavarian Forest (the oldest national park in Germany, by the way,) has much more advanced trail network infrastructure than the Czech side. 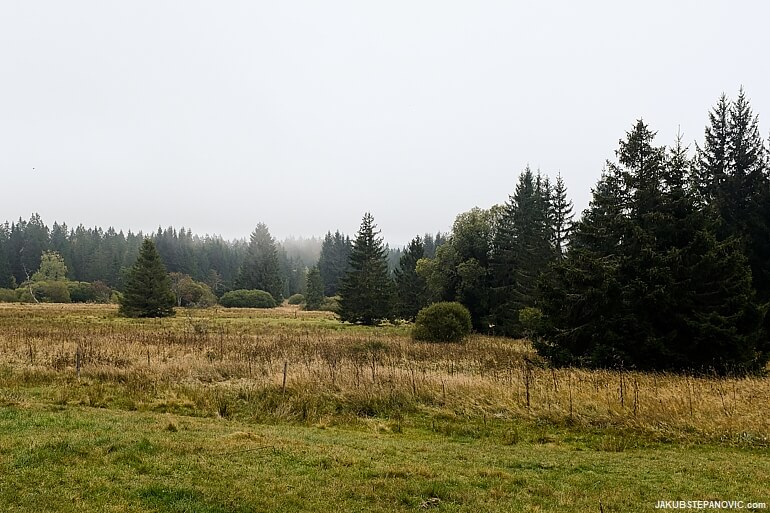 Our loop then continued through Knizeci plane, another deserted village. The only thing that's left is the foundations of a church with a renewed German cemetery. 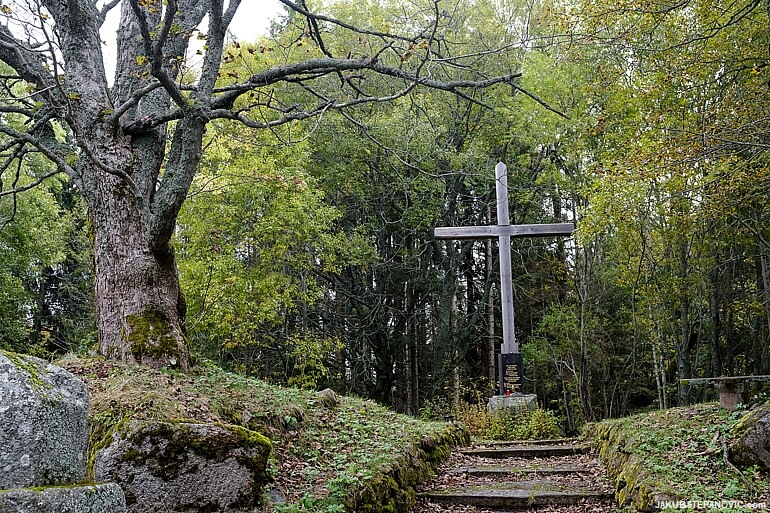 A tad further stands a house where, conveniently, they serve food. Lunchtime! 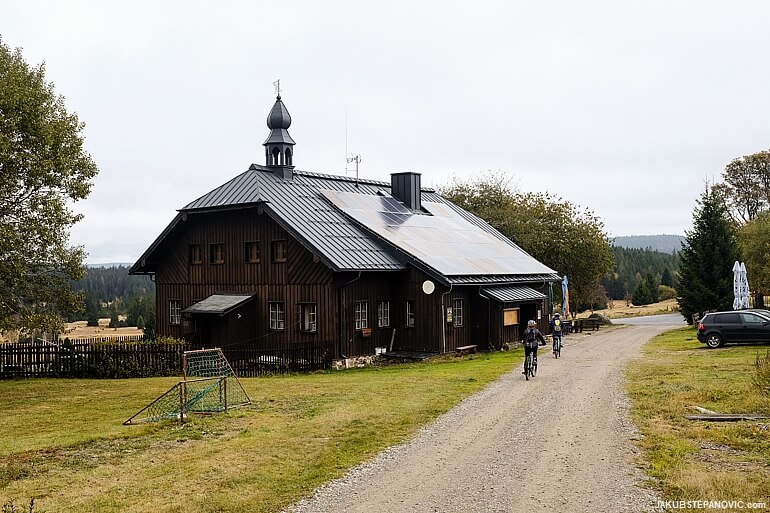 From here, we descended through more appealing landscapes into Chalupska Slat, a stunning-looking bogland with a lake. 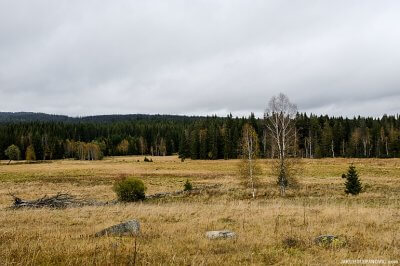 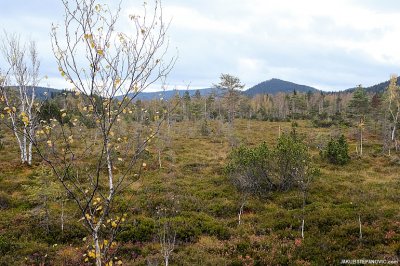 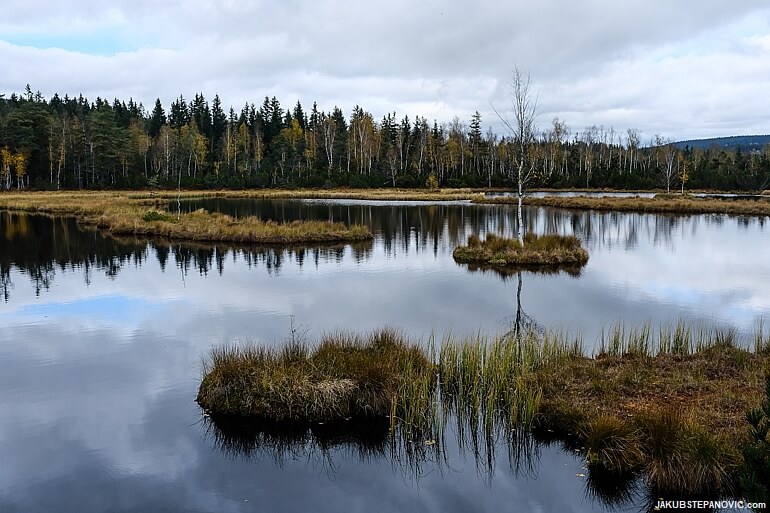 Chalupska Slat was the last point of interest of the loop, and so we started our return towards Modrava. The clouds cleared, and the sun saturated the colours around. 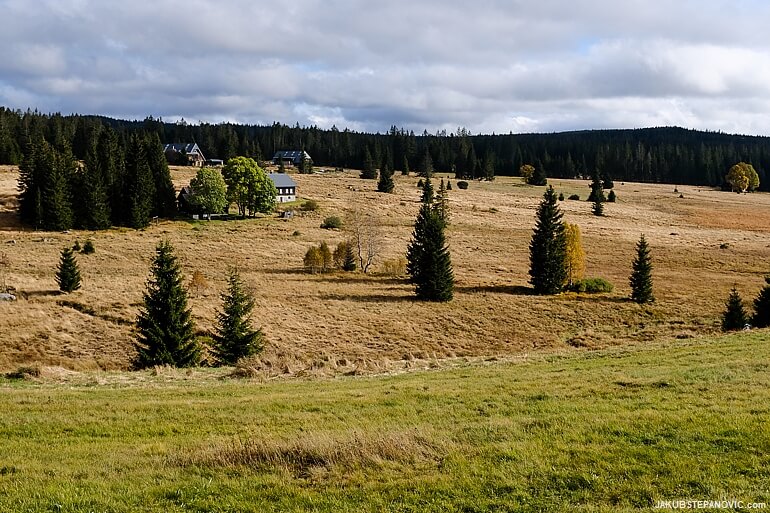 Having the time and good weather, we then extended the trip... 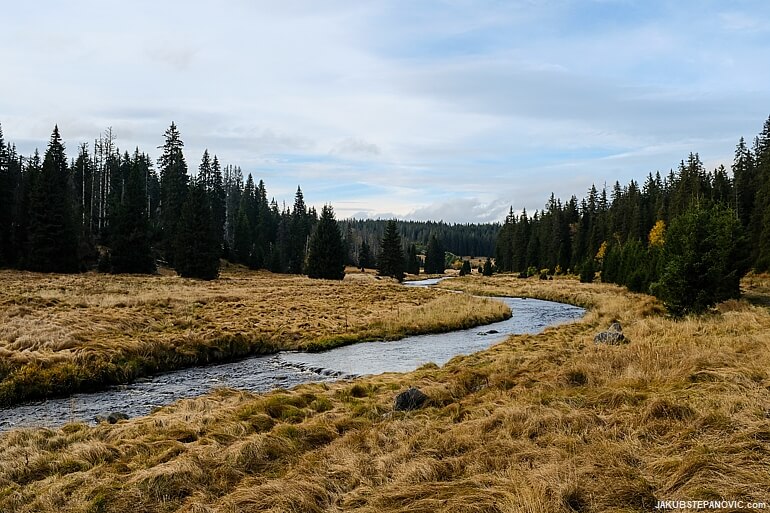 ...and went to spend the evening to another bogland with lakes, Trijezerni slat. 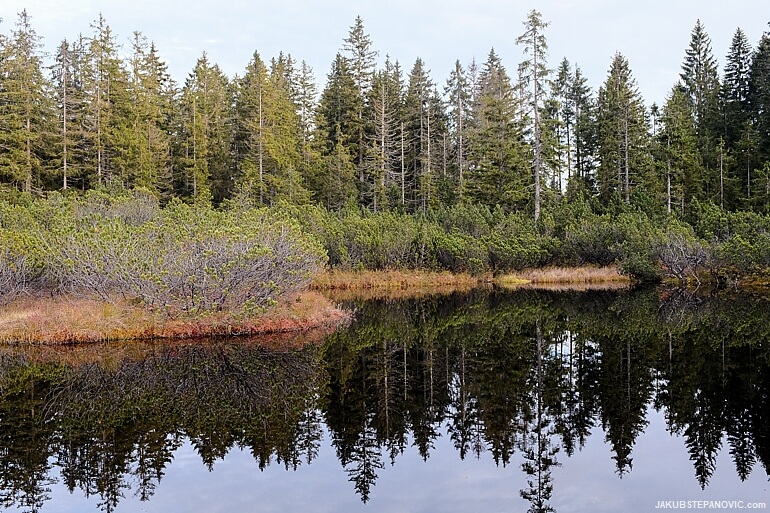 The lakes' water is clean, but it appears nearly black due to the dark peat bed. It was still, reflecting the forest behind. We fully enjoyed the calmness of the fading daylight, as the weather forecast hinted that tomorrow might not be this quiet...

Click for the second part of the trip here.

Alternatively, you might also enjoy my previous posts about mountains, or about biking...