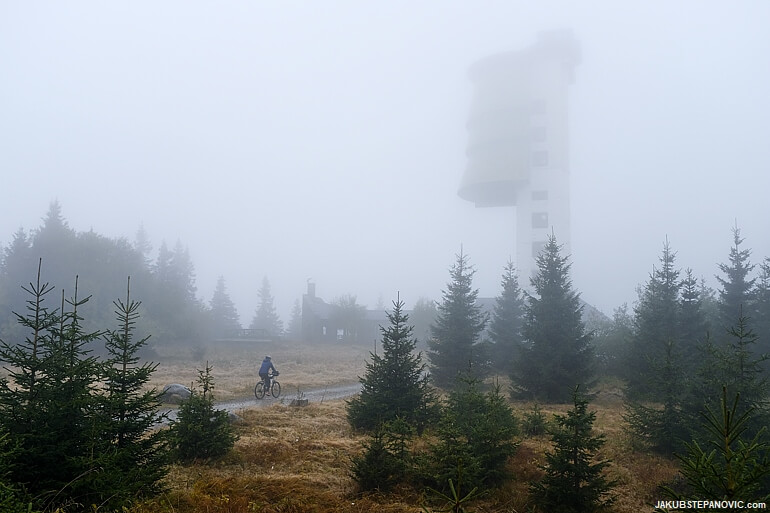 Continuing the bike tour through Sumava's forests and moist clouds.

On the first look, the morning looked like yesterday. On the second, however, the overcast sky sprinkled drizzle, making clear that today will be wet. No worries, being prepared for such conditions, we departed for another loop to explore more gems Sumava has to offer. 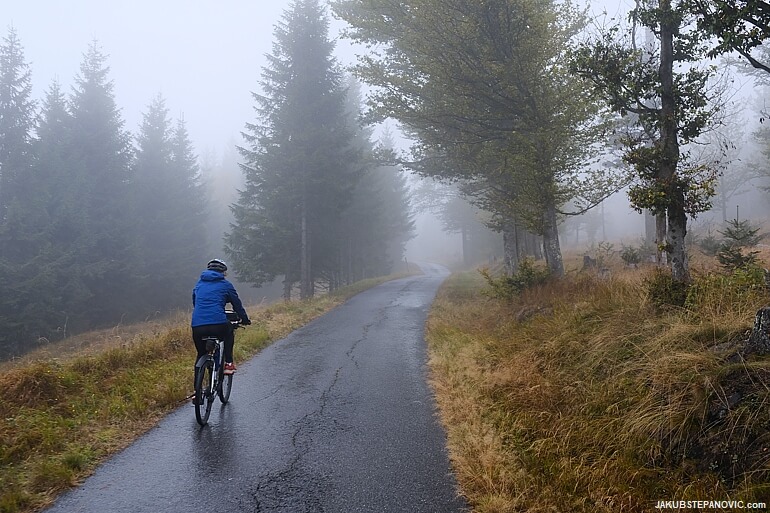 Our first goal that day was to climb up Polednik, a 1315m / 4314ft tall mountain. Along the road were a few good-looking paths, but marked with signs prohibiting their use by cyclists. 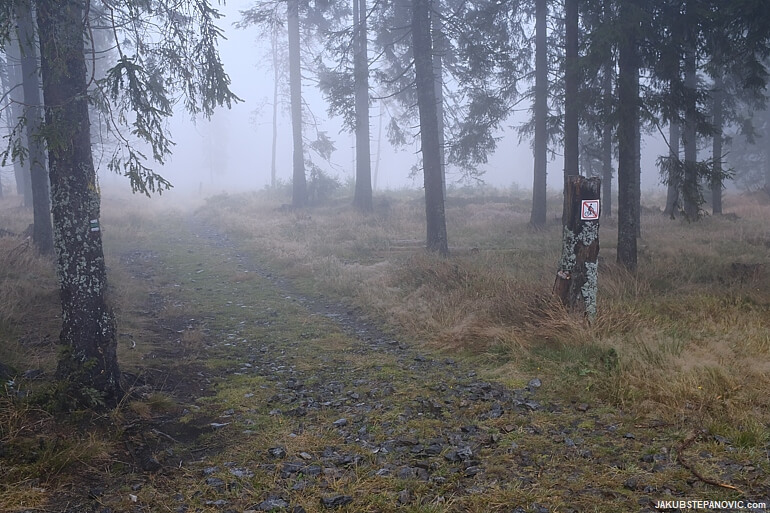 I was thinking about the privilege of experiencing the Scottish Highlands, where's legal to freely roam as desired, whether on foot or bike. So many countries, so many customs. 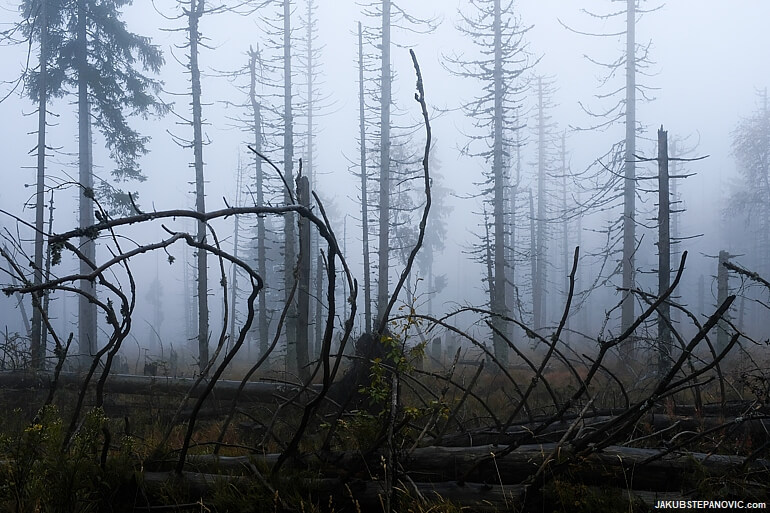 As we gained elevation, the forest got sparse, and once we got up on the ridge, the haze revealed sight of desolation. 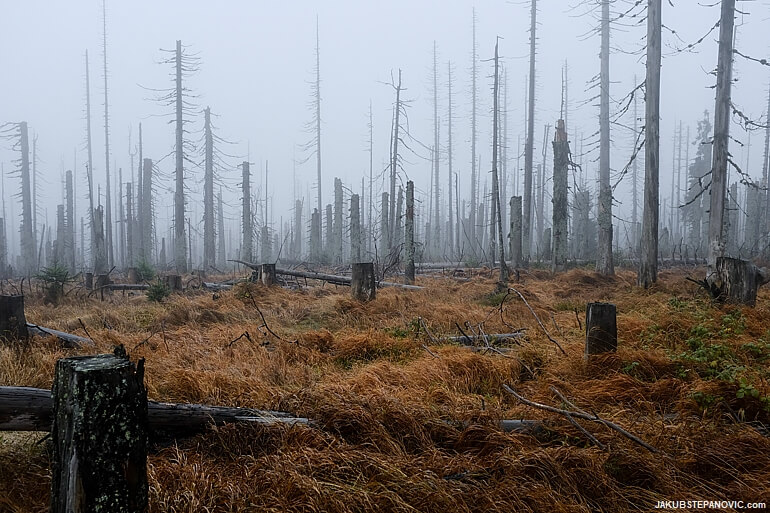 This area sustained massive damage during the cyclone Kyrill in 2007 when hurricane-strength winds left this region with nearly three million cubic meters of wood destroyed. Combined with ongoing Sumava's problem with bark beetles, the forest will take many years to restore. 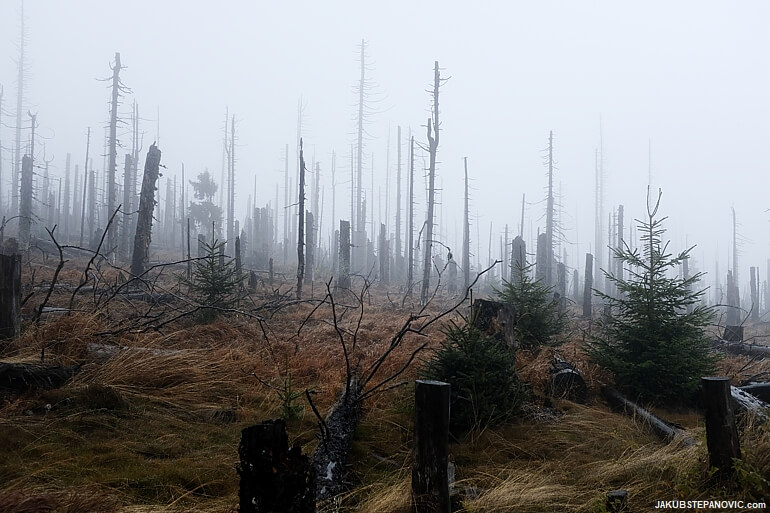 Suddenly, the dead trees that pierced the fog on the ridge got shadowed by a different vertical — a bold concrete structure. We reached the summit. 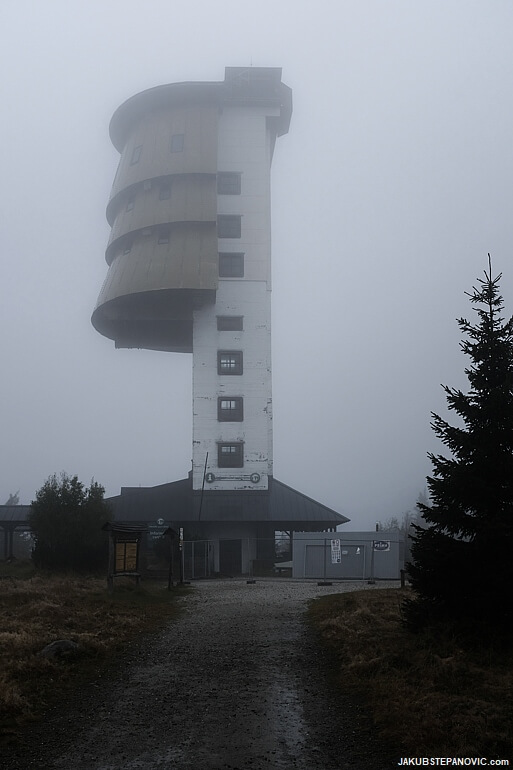 Polednik is topped with a 37m /121ft tall tower, built in the sixties of the 20th century as a military watchtower and radio jamming station. Once its function became redundant, it was turned into an observation deck and was open to the public from 1998 to 2020, when it closed for reconstruction. Not that we'd be upset about its closure, today's views would be similar as if they had blinds on. But since the drizzle turned into a downpour, we welcomed that the shelter area underneath the tower was accessible, and we had a snack there.

The rain had no signs of stopping, so we continued our journey. At the start of the descent was a different sign for cyclists; this one left me quite entertained: 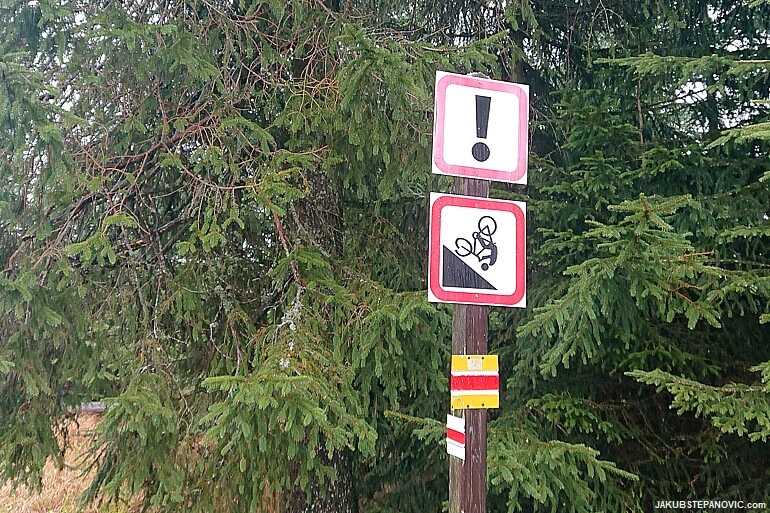 About a half-way between the summit and the nearest village, Prasily, is a glacial lake. 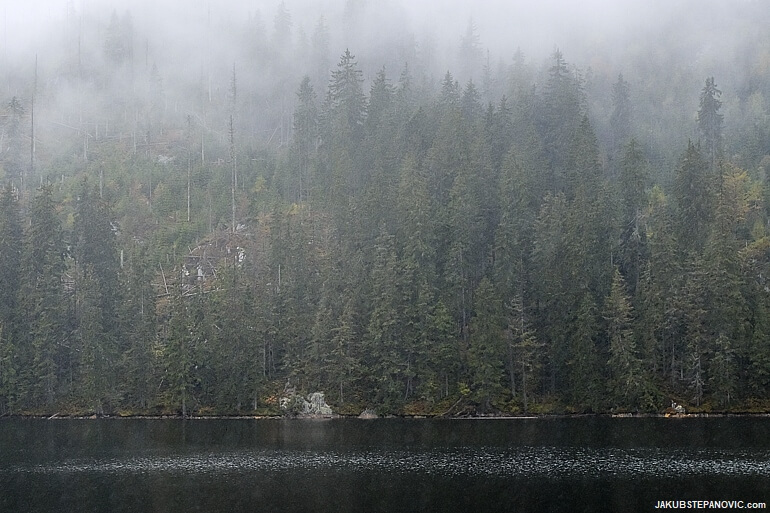 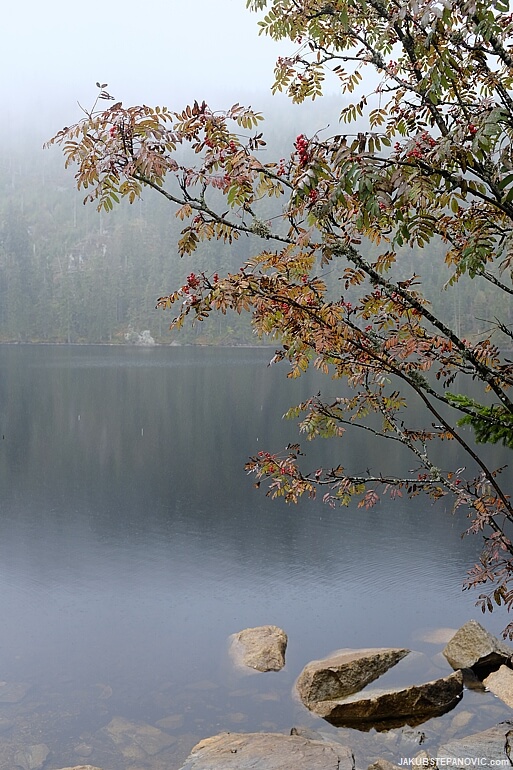 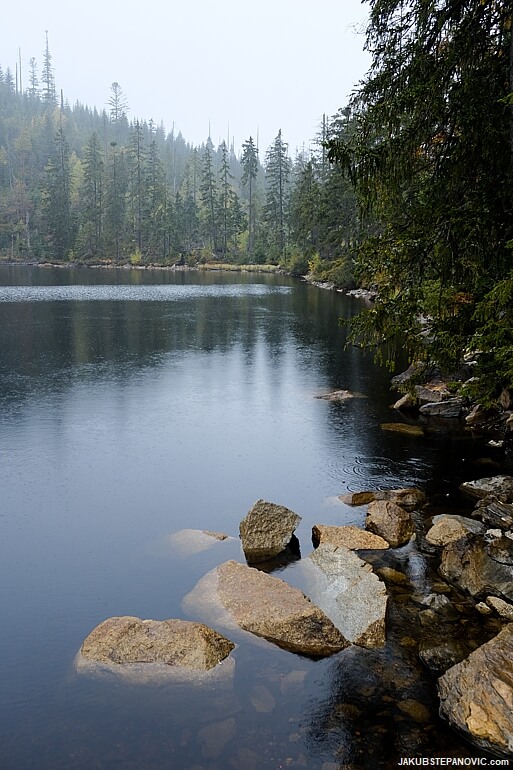 The lake is pretty, but since the downpour intensified into a deluge, we kept the course to Prasily — there's a cafe serving cakes. Suddenly, all was well again. 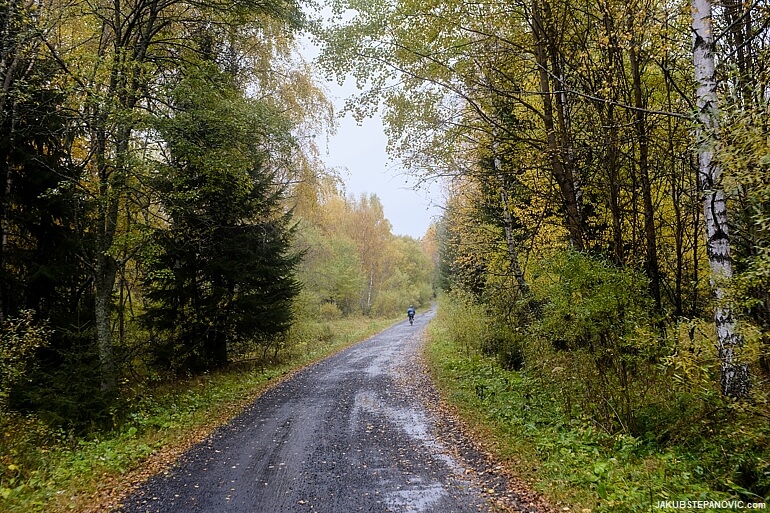 Near the village was yet another sign that caught my attention: 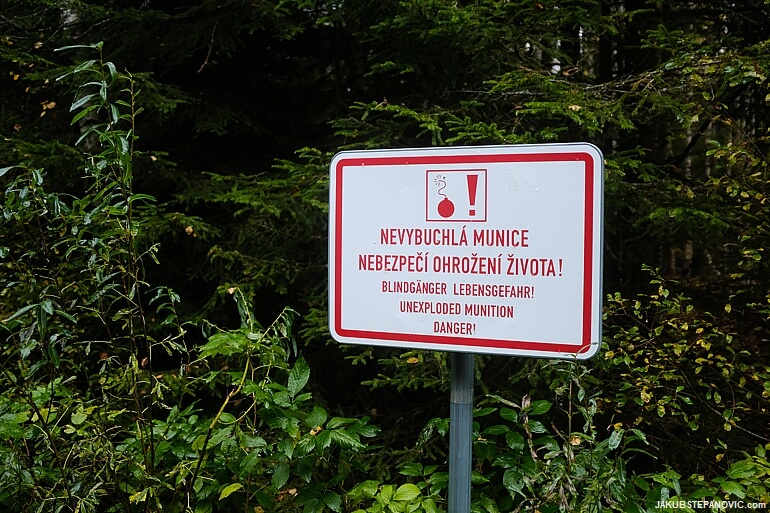 After the establishment of the iron curtain, Prasily became a part of a military proving ground, which used the lands nearby as shooting ranges for tanks. They left loads of debris behind, therefore ruining the area for any agricultural use for years to come. It is remarkable how only a few decisions led to a complete transformation of the region. Sadly in this instance, not for the better.

The second leg of our loop had more cheerful outlooks. To start with, we entered a beautiful, healthy forest again. 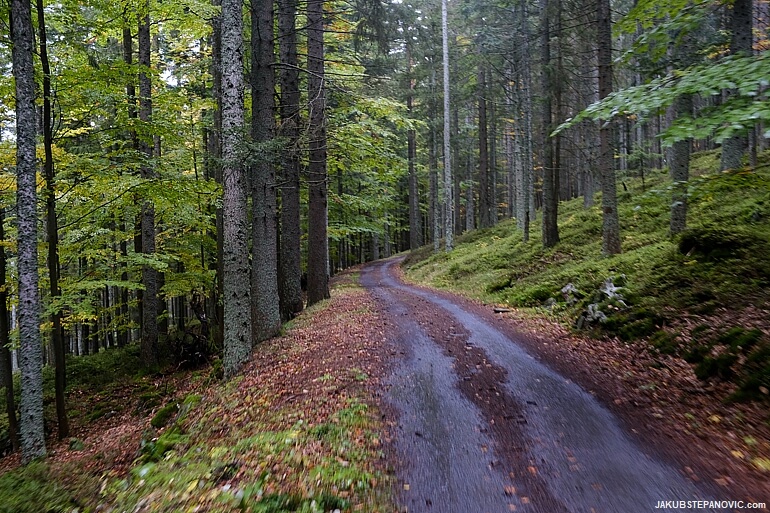 One can't escape the strange history entirely; we passed ruins of a church... 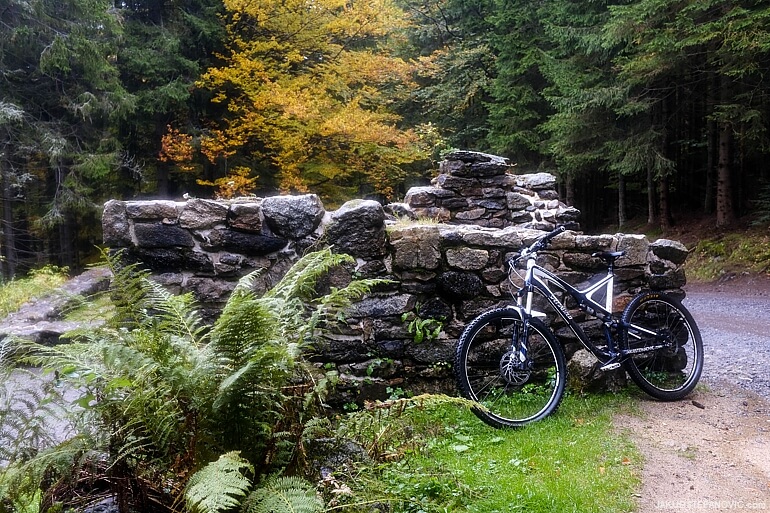 ..but the site was sensibly brought back to life by sculpted guides of a spring nearby, ending in a pair of hands made from glass. 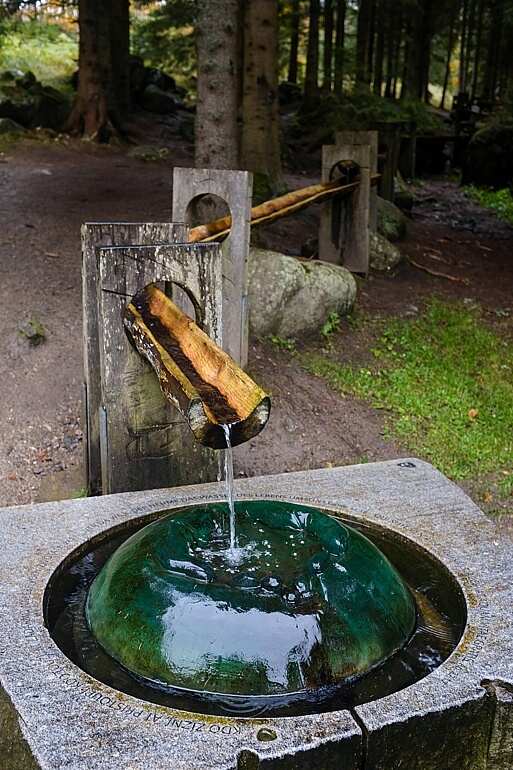 Our route then followed the Vchynicko-tetovsky navigational canal built at the turn of the 18th and 19th centuries to transport timber from Sumava towards Vienna. It is an extraordinary industrial achievement that enabled people to utilize the previously inaccessible local natural resources and was used up until the world wars. Nowadays, it feeds water into a local hydroelectric power station. The rain was still on, though, and I was lazy to stop and search for some exciting photo compositions. 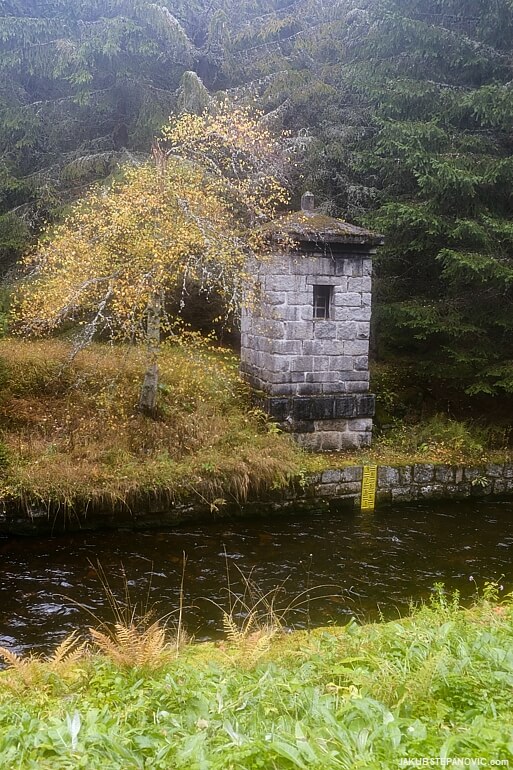 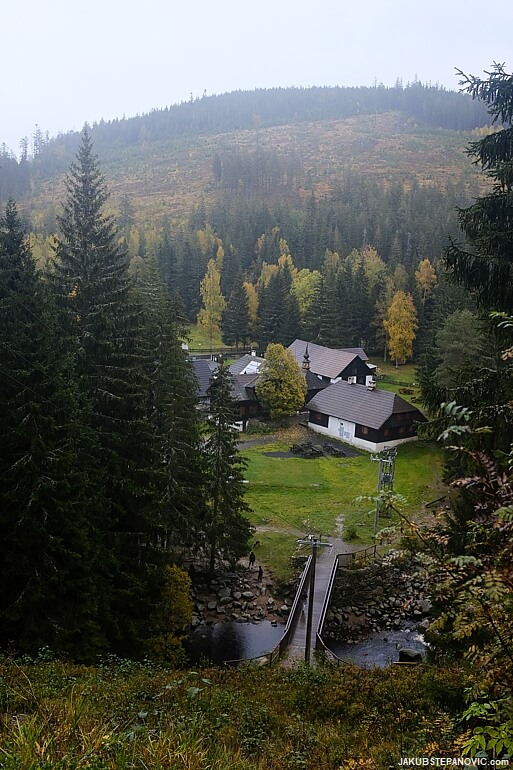 A vision of a warm shower fueled the last few km, which we did without any further stops.

On the last day of our trip, we cycled to see two other glacial lakes. 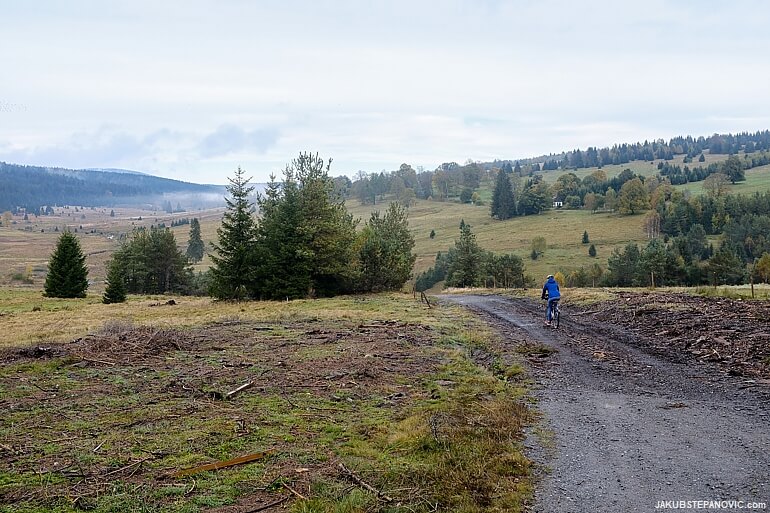 A part of the route, we took former maintenance and patrol corridors from the cold war era, some of which boasted surface that many airstrips could be proud of. 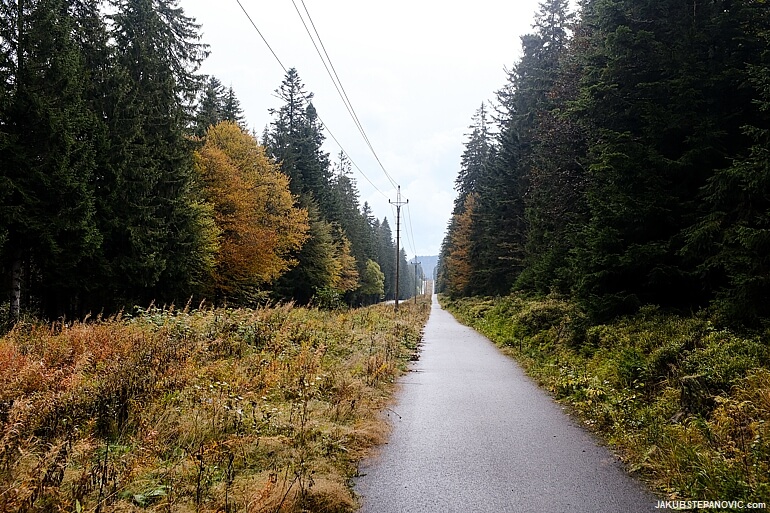 However, when we could, we ditched the smooth asphalt and the proximity to the road for more remote paths... 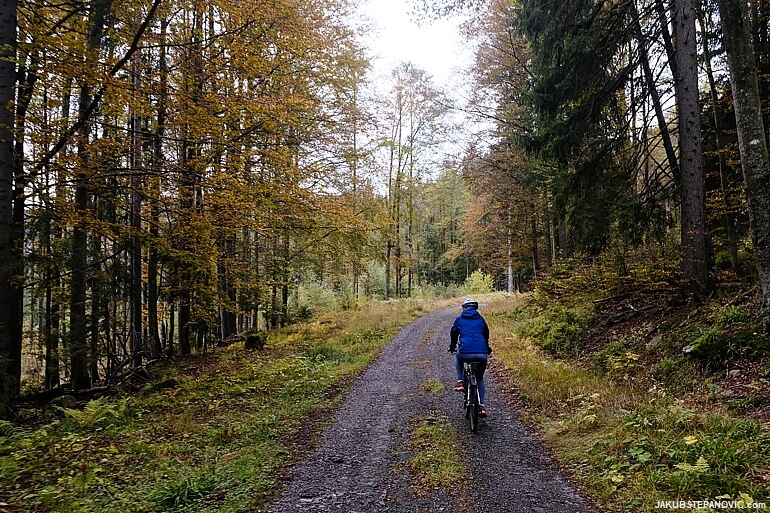 ...which rewarded us with scenic views of Sumava's countryside. 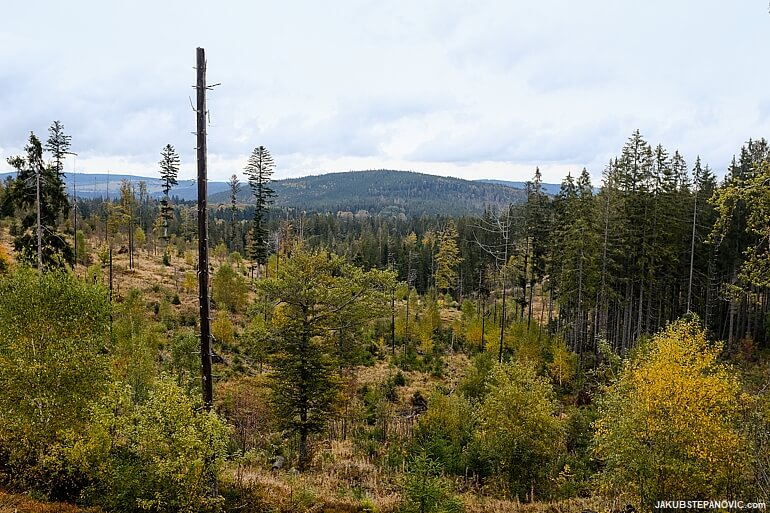 The last section of the trail to the lake Laka was singletrack, bringing a smile to my face. 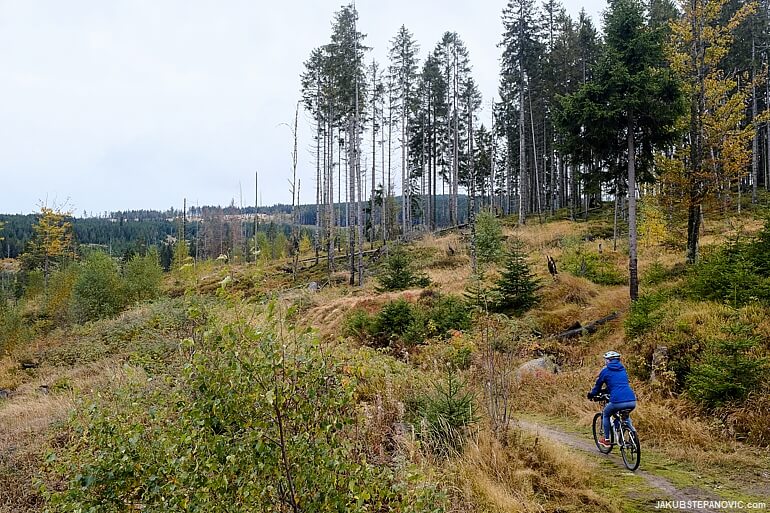 The lake itself was a reason for a smile too, as it is delightful. 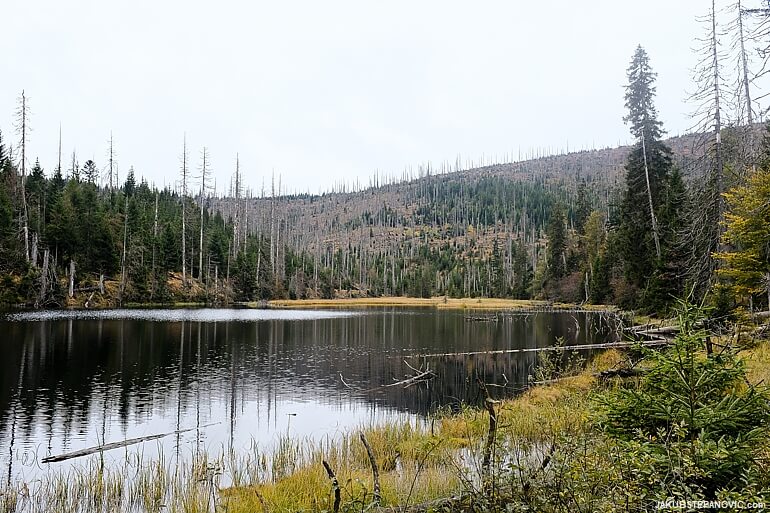 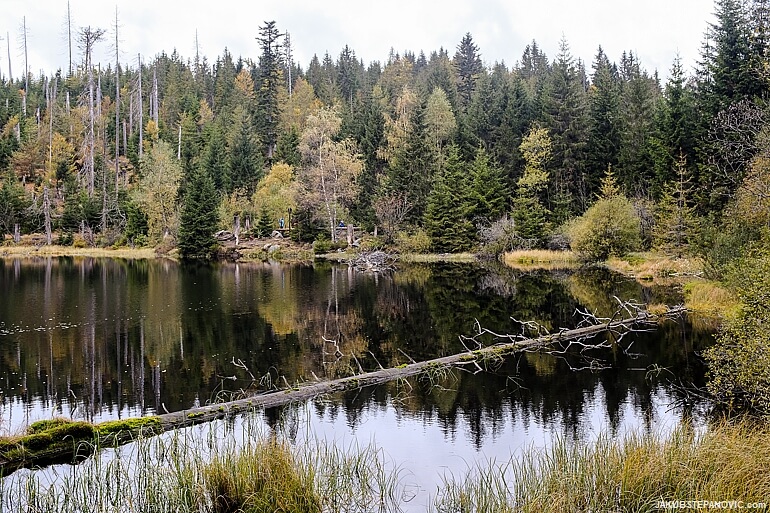 Lake Laka is the smallest glacial lake in the area. The second lake of the day, Cerne lake, on the other hand, is the largest natural lake in the Czech Republic. Getting there was attractive, too. 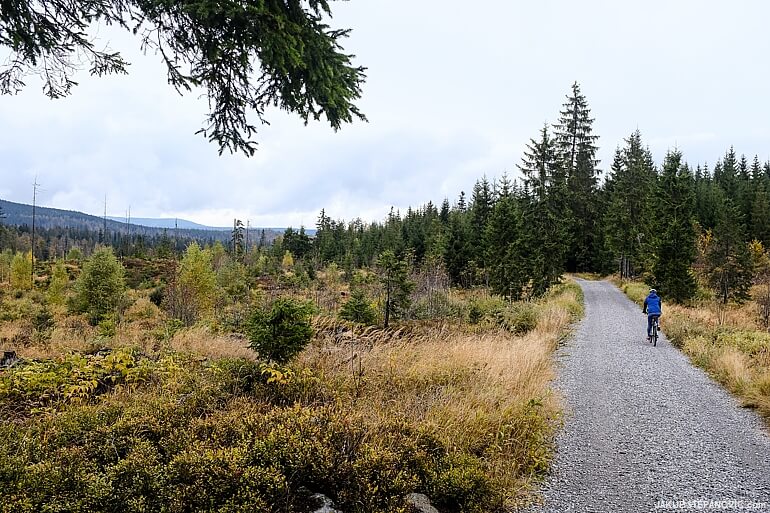 While travelling through the range, I couldn't but notice a surprising feature. There is a massive concentration of wayside crosses, shrines, and small chapels - most of them recently renovated. I didn't expect to see such, considering that the Czech Republic is often cited as one of the least religious countries on Earth. 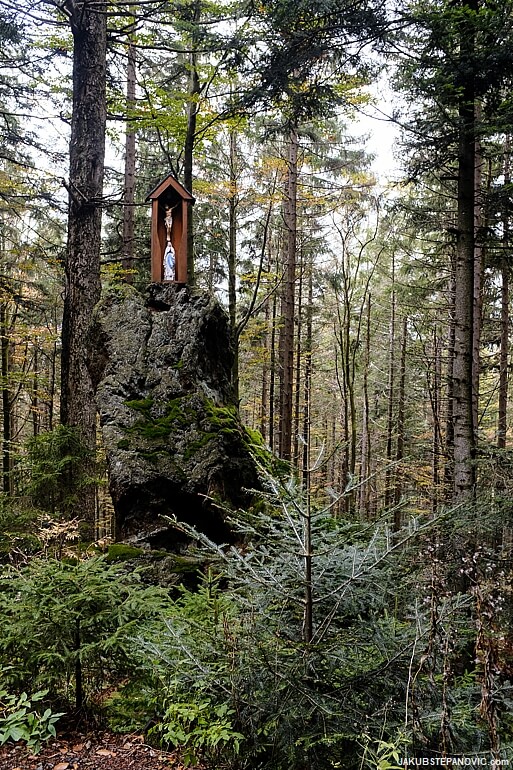 It was an interesting contrast, seeing these refurbished reminders of faith next to the wounded countryside of the 20th century.

Cerne Lake is just outside of the edge of the national park, yet it feels just as atmospheric as the locations we saw inside. 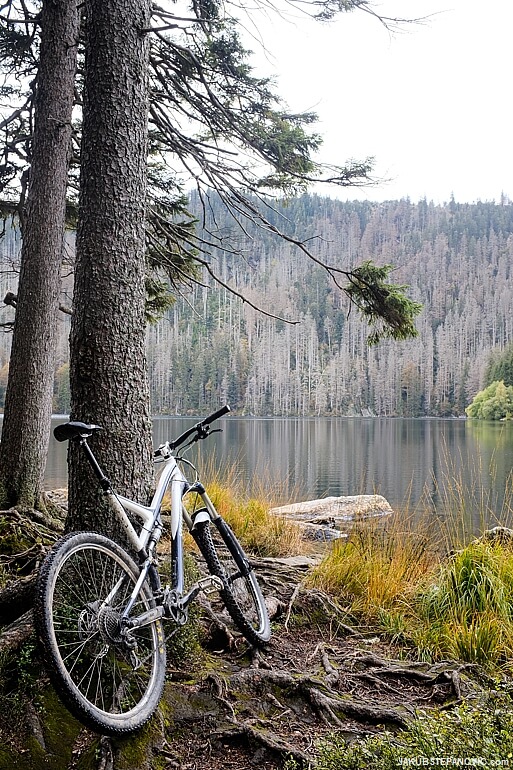 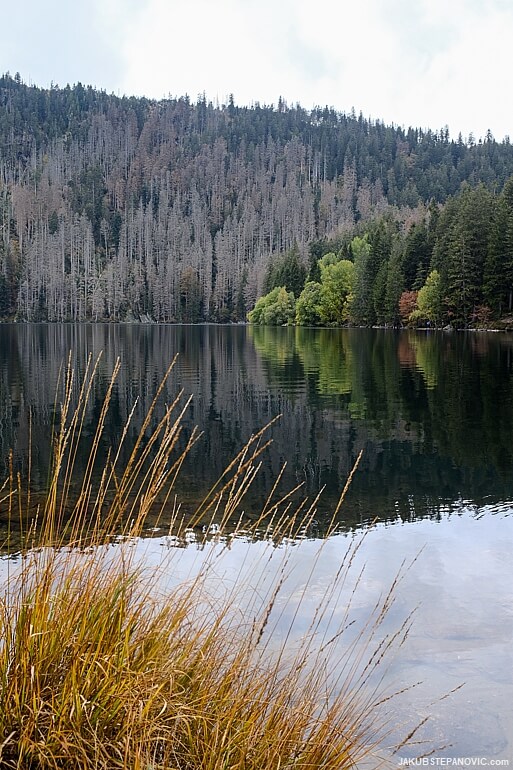 Behind its south-west edge is a cliff, so the shore has some cover from the wind and an elegant backdrop. Together with starting Autumn colors, it was a great ending to the trip. 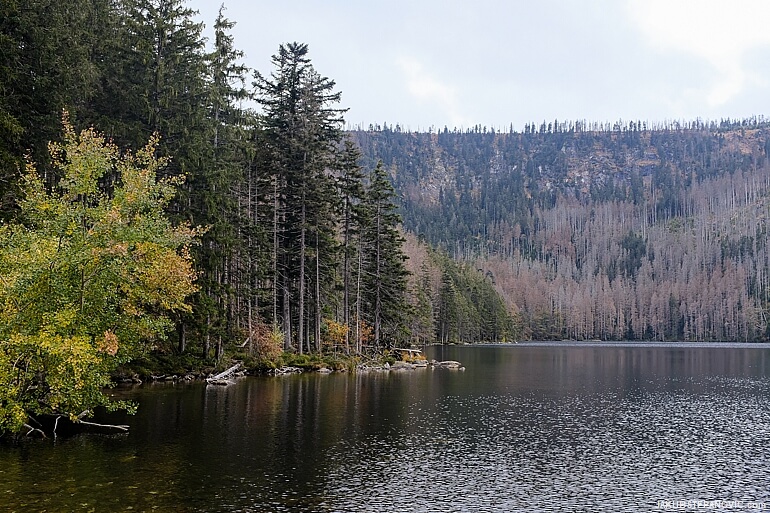 If you liked this article, you might also enjoy..: