Mountain biking in the Eastern Highlands during the first snow.

December days in Scotland are rather short, which limits possibilities of day trips. That in mind, I went to some of the most accessible Munros (mountains above 3000ft) out there. They are above the Cairnwell Pass, the highest public road in the UK, where the Glenshee ski resort is. 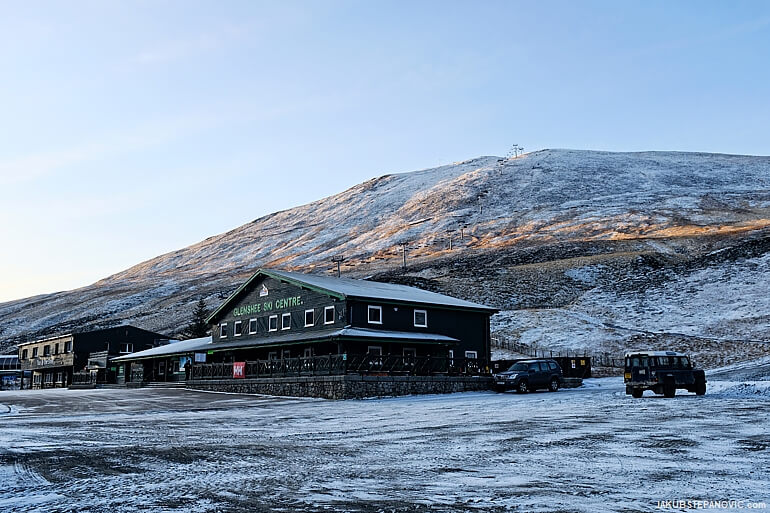 The base of the Glenshee Ski Centre, the largest ski resort in the UK. While the lifts aren't working out of season, the cafe is open a year-round. Something I was looking forward to after finishing the ride.

The west side of the resort spans over two of the three mountains I planned to see, so they are easily reachable by maintenance roads. The roads were icy and steep at places... 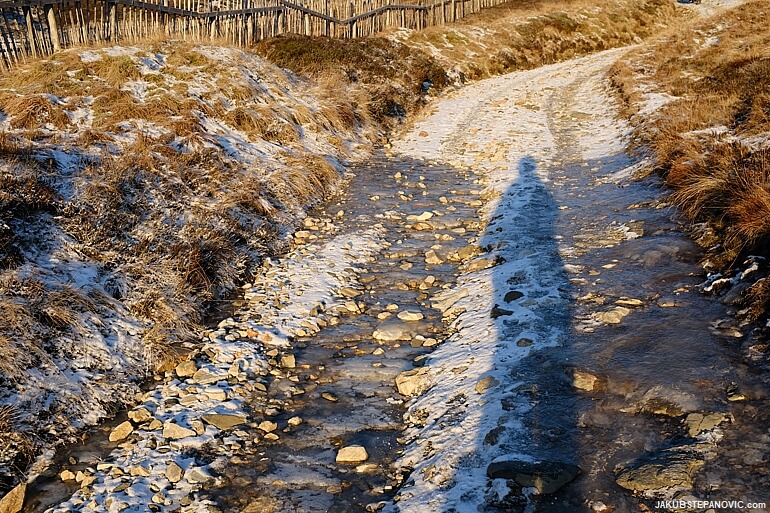 ...but as the elevation difference from the parking to the summit of the first mountain, Càrn Aosda, is less than 300 meters (1000ft), getting there was straightforward and quick. A nice warm-up for what was to come. 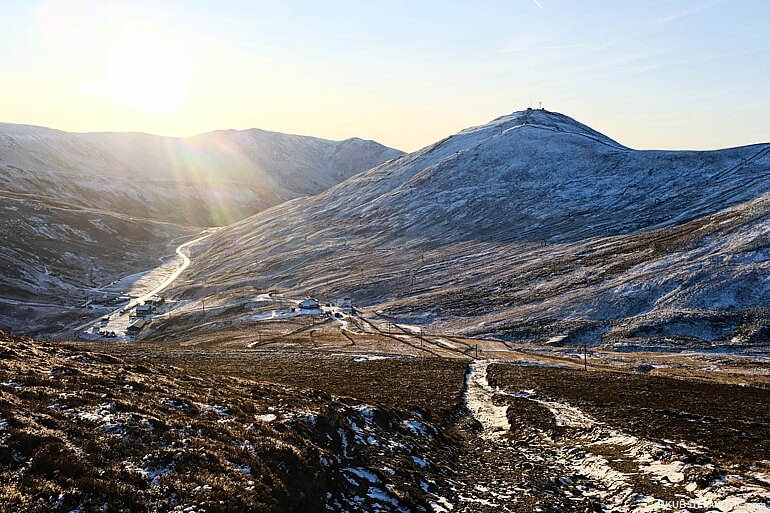 From there, I followed another road down to the saddle. Matter of moments on the bike. 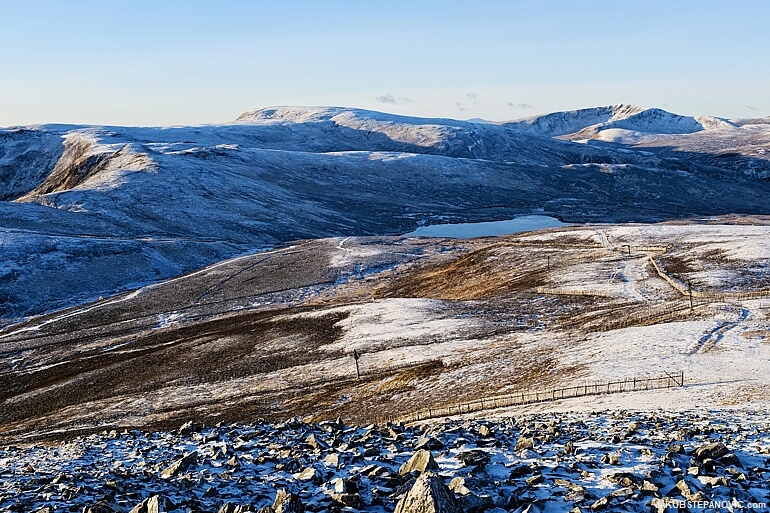 The second mountain, Càrn a' Gheòidh,  is away from the ski centre, and therefore is reachable only by a narrow path. If the road until now was fun to ride on, the trail was exciting beyond words. The amount of snow was just enough to still provide grip, and seeing it whirlpooling under my wheels, while listening to its crunchy sound... yes, please! It was like riding a dusty trail, only the dust was snow. 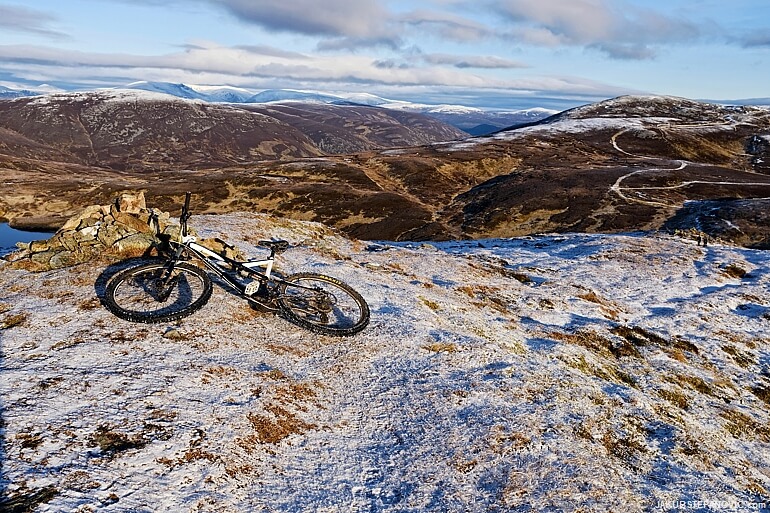 Càrn a' Gheòidh means "Hill of the Goose" in English, and while there suppose to be wild birds in the area, I didn't see any. However, I saw plenty of mountain hare, which already had their winter pelage. That was cool. It didn't take long, and I was at the second summit.

Besides the cairn, the mountaintop has a shielded area, great for lunch. 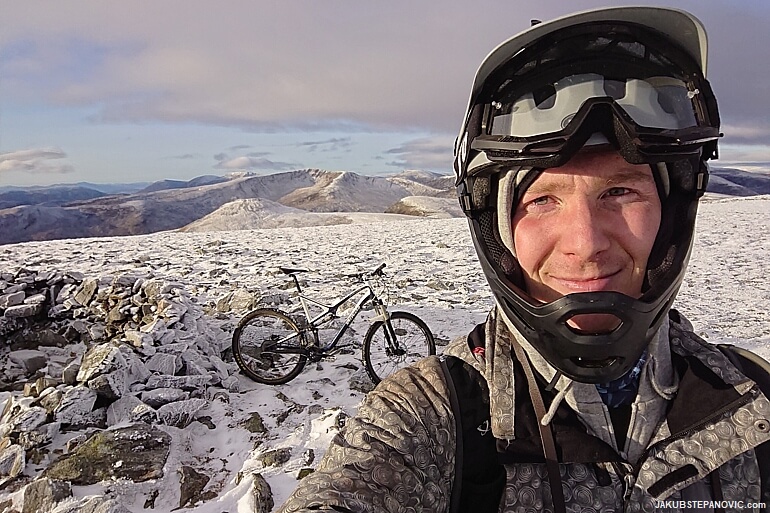 The expression says it all. Also, note the peak above the bike - it is Càrn Bhinnein.

Càrn Bhinnein is not classified as a Munro due to its low prominence, and so not many people go there. But, while eating, two hikers went that direction, mentioning that it is worth the little extra distance. Having the time, might as well. 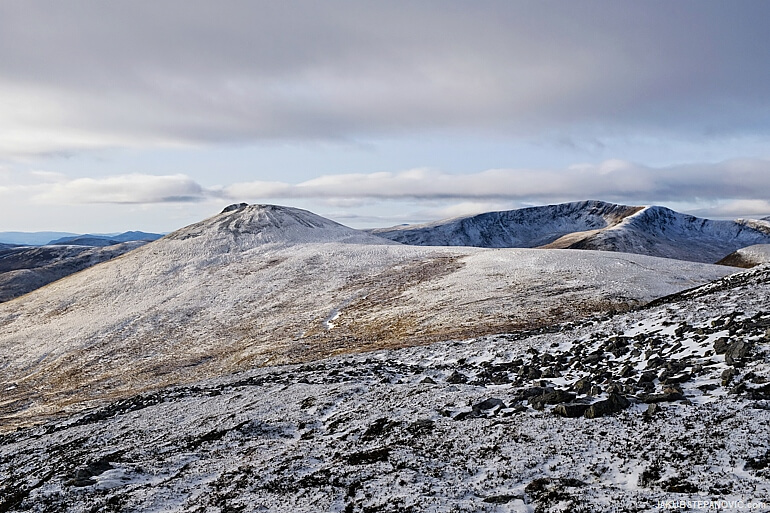 And sure enough, what a good call that was. The views from Càrn a' Gheòidh surpassed all of the "proper" mountains of the day. 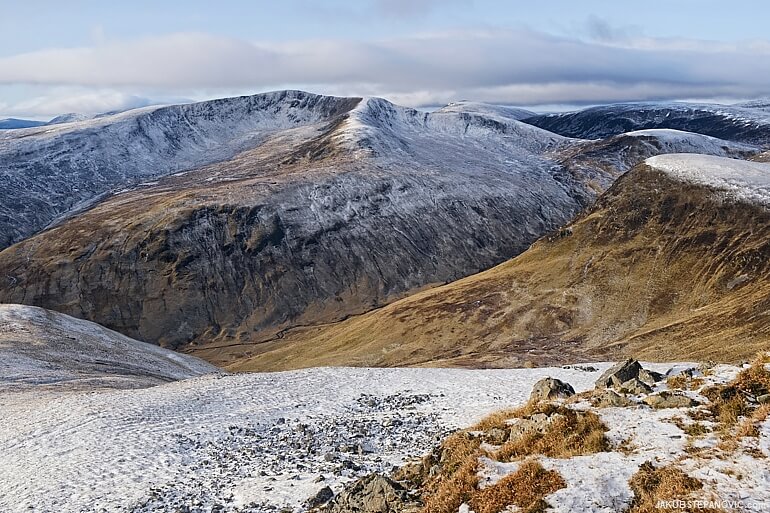 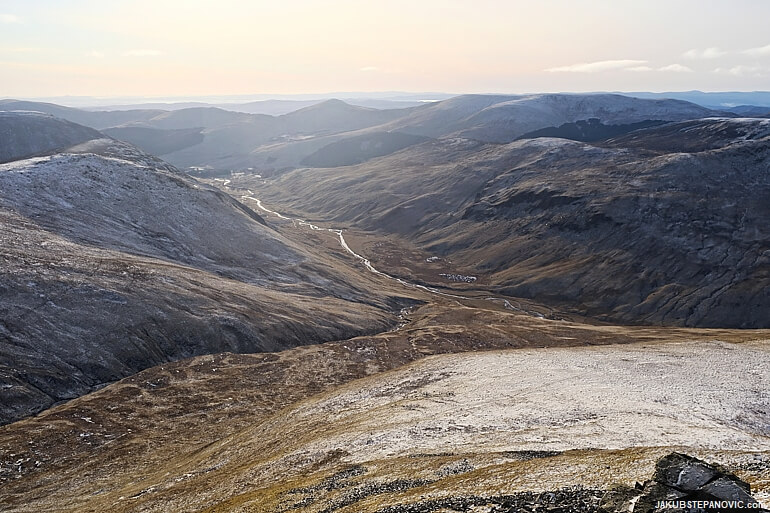 Following the enjoyment of the natural prettiness in all directions, it was time to head back towards the ski centre, to scale the last of the Munros: the Cairnwell. That one with the telecom tower in the pic below. 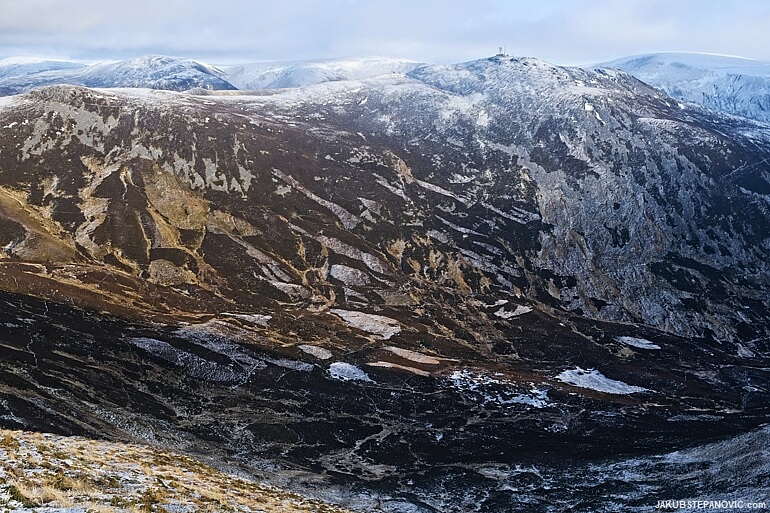 The path there follows a wide ridge, so one can choose the terrain to navigate through. Together with the outlooks, it was entertaining all the way to the summit. 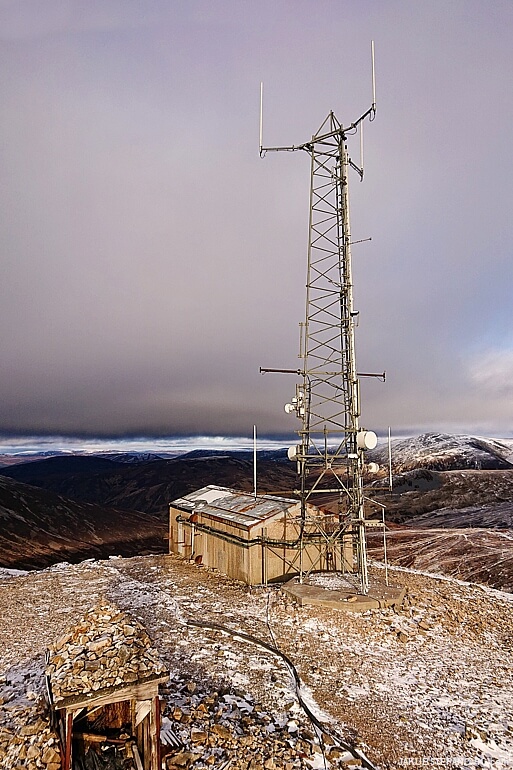 The Cairnwell is often referred to as one of the most damaged Scottish mountains, caused by the ski developments and the telecom equipment. While I am all for clean, pristine natural areas, I didn't feel afflicted about this one. Considering the number of unspoiled mountains here, having one with a tower doesn't seem like that big of a disaster. Moreover, the building attached to it provides a nice shelter - a welcomed thing, as a fresh wind changed the sky from almost clear to overcast. 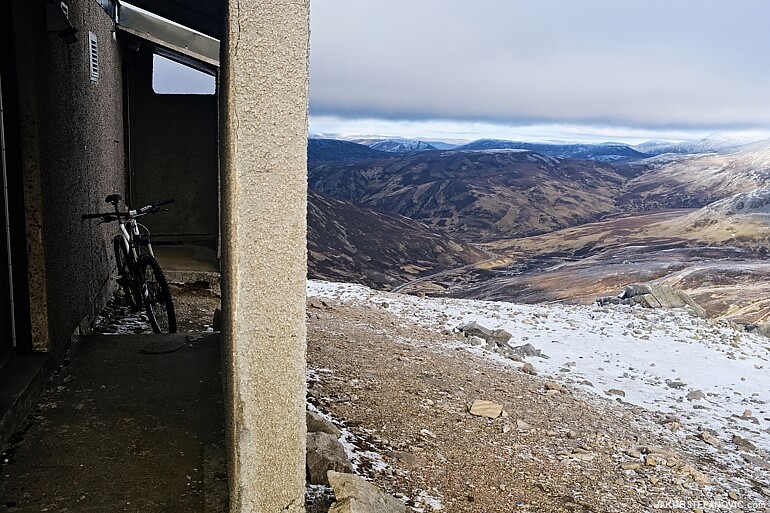 Even with the shelter, it started to be cold after enjoying the views for a while. A signal to descent to the parking lot. While there's a dirt road going down, my plan was to find an alternative, something without the ice patches and more fun to ride. 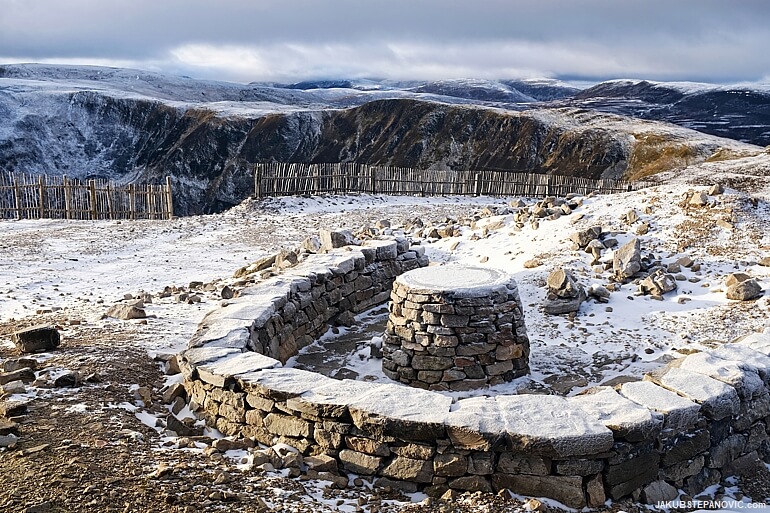 When I passed one of the chairlifts, I noticed bike tracks starting there. Since the lift wasn't open for the public, it meant that these riders were either employees of the ski centre, or locals who knew them. "Fantastic, they must've known a good way down," I thought, and turned to follow the tracks. Unfortunately, navigating by white traces on a white background, I lost them almost immediately. And before I knew, the already steep slope was only getting steeper and steeper. "Ooooh, this was not the best decision," I sighed while gaining speed. "At least, the cold will keep the brakes from fading." Thankfully, it went all right. A bit of balancing later, the severity of the gradient declined, so I was able to stop and take a breath. While at it, I also took a picture. 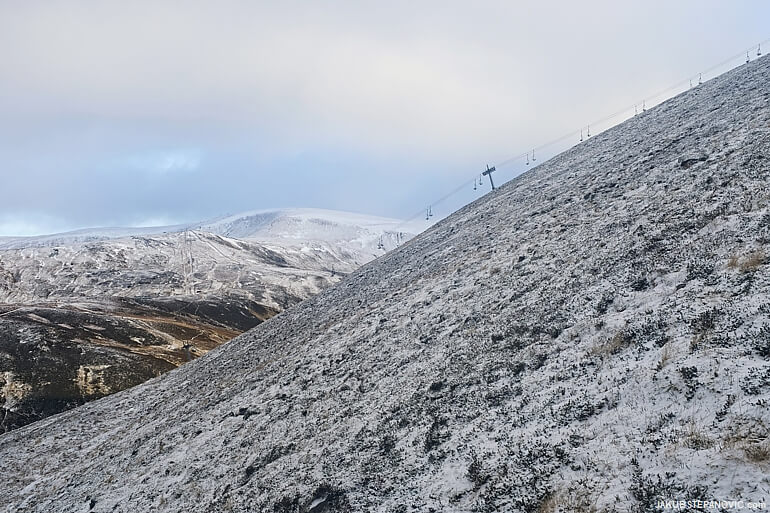 From this point, it was a piece of cake, and I was back at the car park in no time. With a big grin, I looked back at the mountain I just came from, put my bike into the car, and headed for the resort's cafe. They had great soup for under four quid, thumbs up! Warmed, refueled, and happy, I set off back home.

Follow my Ig, Fb, R, to keep an eye on the upcoming articles. Thanks for reading.