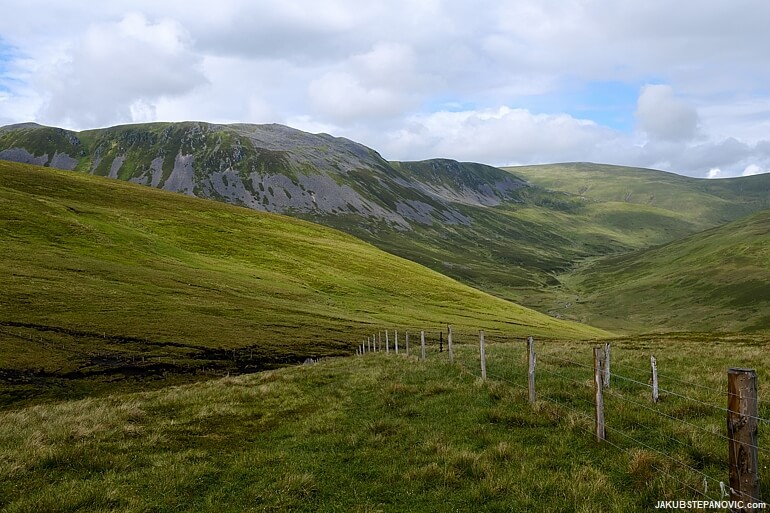 After an excess of 100 days, the Scottish lockdown restrictions on leisure travel were lifted last week. What better way to celebrate than by returning to the beloved mountains?

Good friends of mine and I decided to do a day trip somewhere near - less driving, more walking. That in mind, we ended heading to Glen Isla, from where we made a loop spanning over mountains Glas Maol and Creag Leacach.

The route starts by following the river Isla, which provides for beautiful settings. 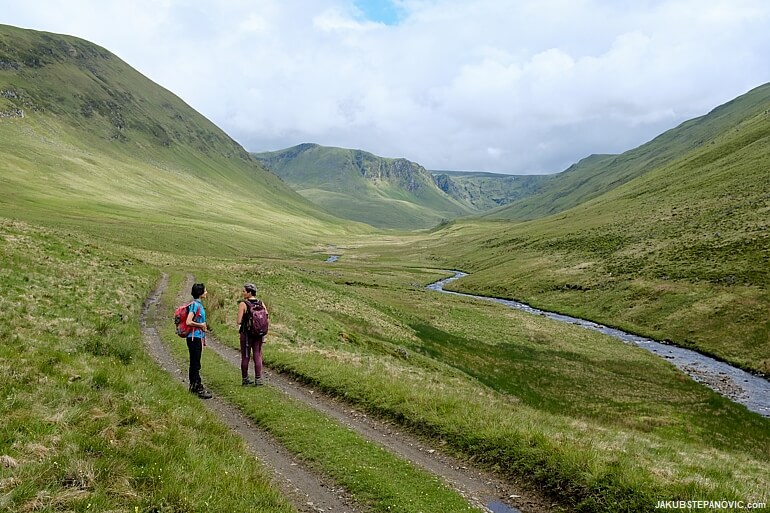 Shortly after the picture above, we turned left to the Monega Hill. Getting up showcased the glen we came by... 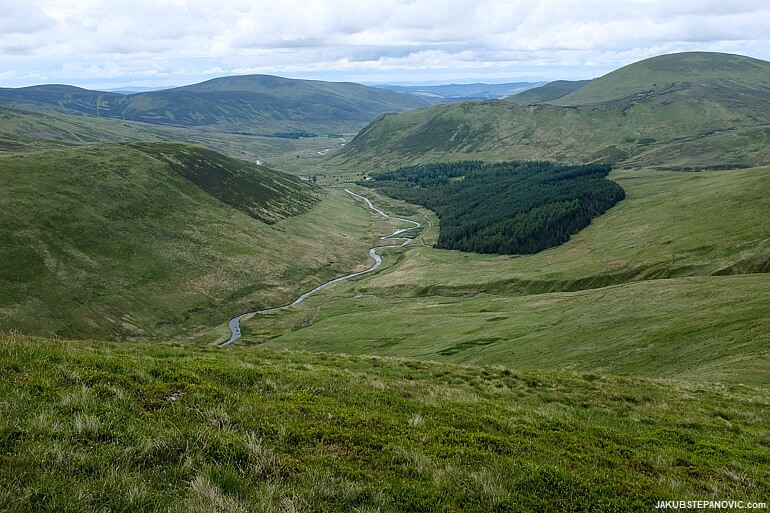 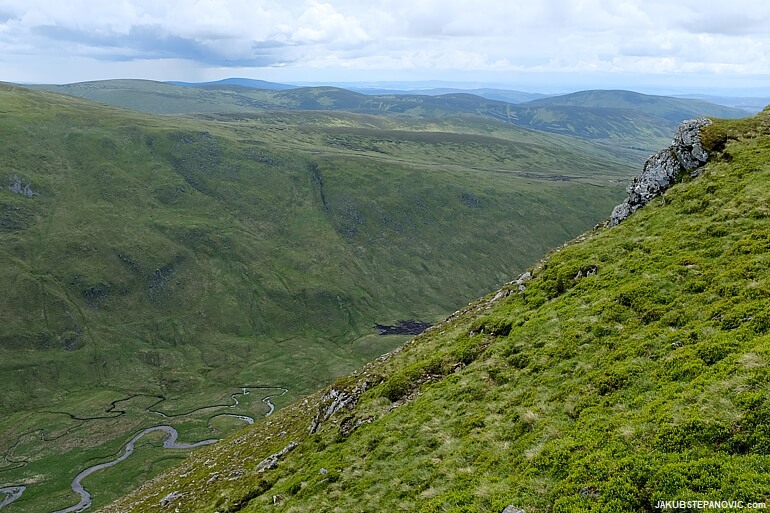 ..and opened views on some beautiful cirques. 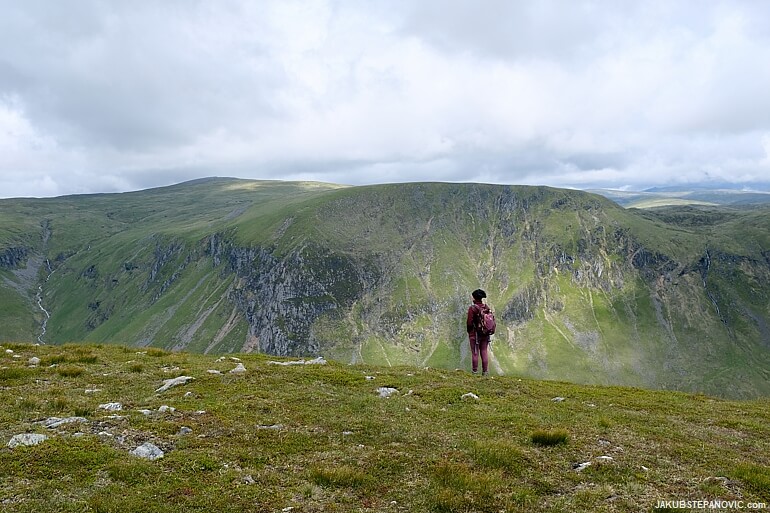 The Mongea Hill links to the Glas Maol by a remarkably picturesque ridge. 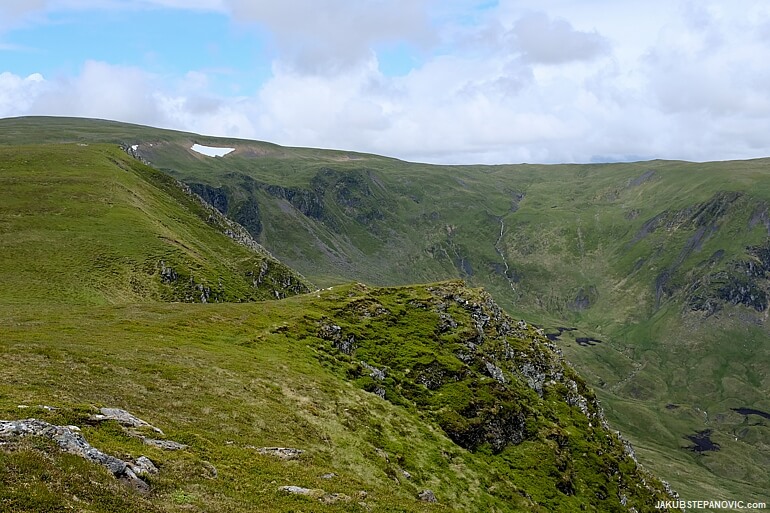 At that moment, the sun came, bringing the greenery around to new levels. Glas Maol shielded us from wind, and so it was too good to pass it. Picnic, followed by an appreciation of the complete silence, stillness, and sunshine. 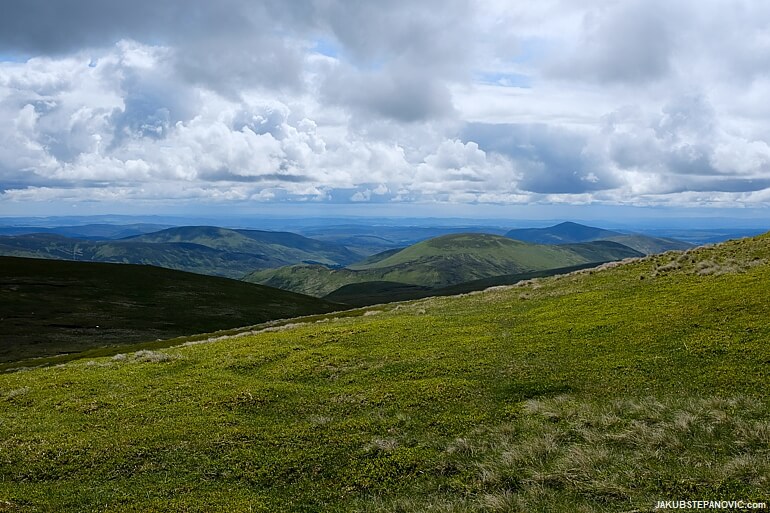 I was looking forward to the summit of Glas Maol, as I knew that the other side of the mountain leads to Cairnwell pass - the highest public road in Scotland, surrounded by a plethora of scenic mountains. But, by the time we got there, it was shrouded by a dense cloud, so we kept going to the second mountain, Creag Leacach. 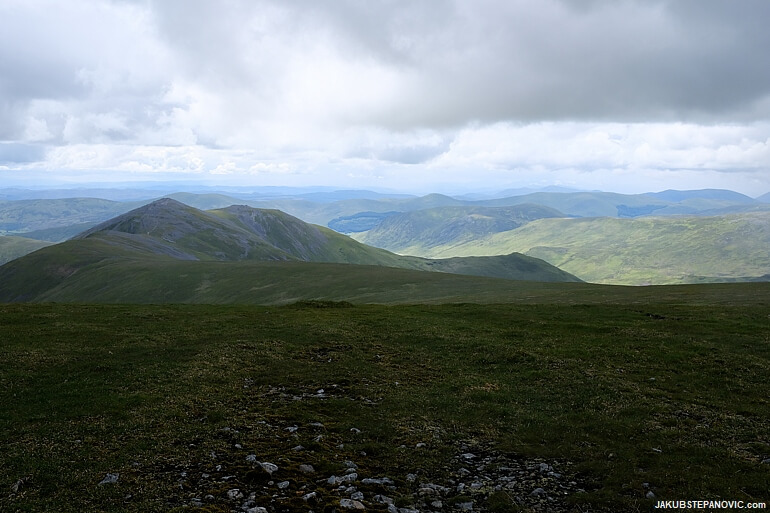 Between the two summits, a shower caught us. However, as the wind weakened, it felt quite nice. It was almost as if nature caressed us, after all that time since our last visit. 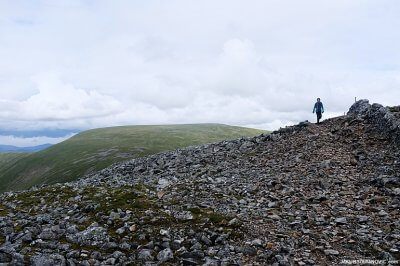 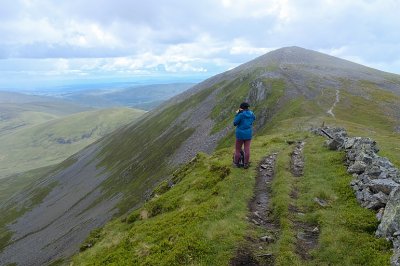 The air was fresh but not cold, and the rolling clouds made a wonderful show. 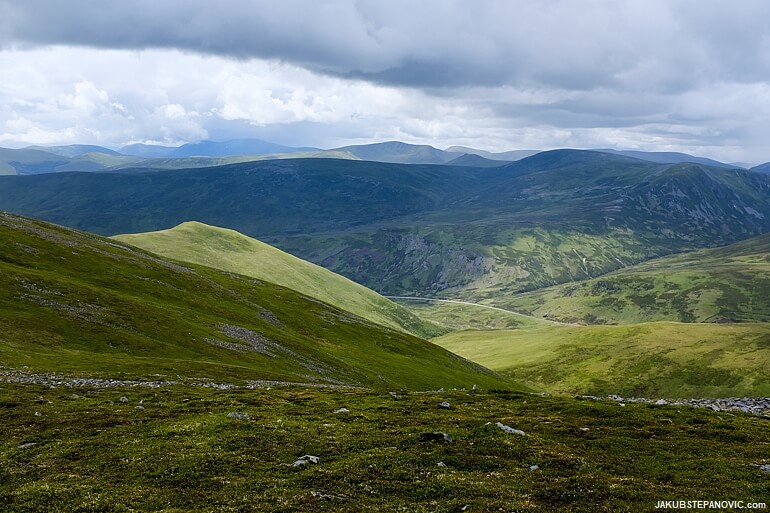 We also got the view on the Cairnwell pass. It was very cool seeing it from this perspective. 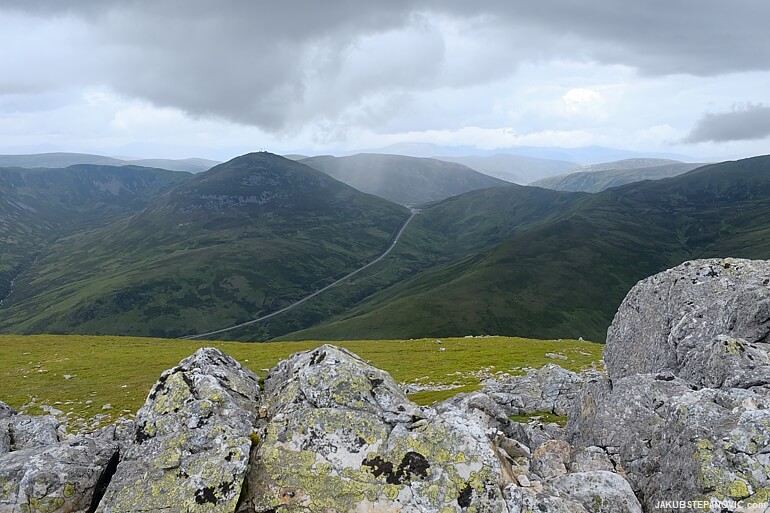 The Cairnwell pass, and the eponymous mountain to the left of the road.

The Cairnwell mountain with the following ridge was especially neat to see, as I rode my bike up and down it last year. It always feels great to connect two separate adventures on my mental map of the area. It puts the geography of places in order and makes sense of their spatial properties while giving fantastic visuals. What's not to like?

That rain pictured above coming through the pass was heading our way. Moreover, another cloud was closing in from the other side too. 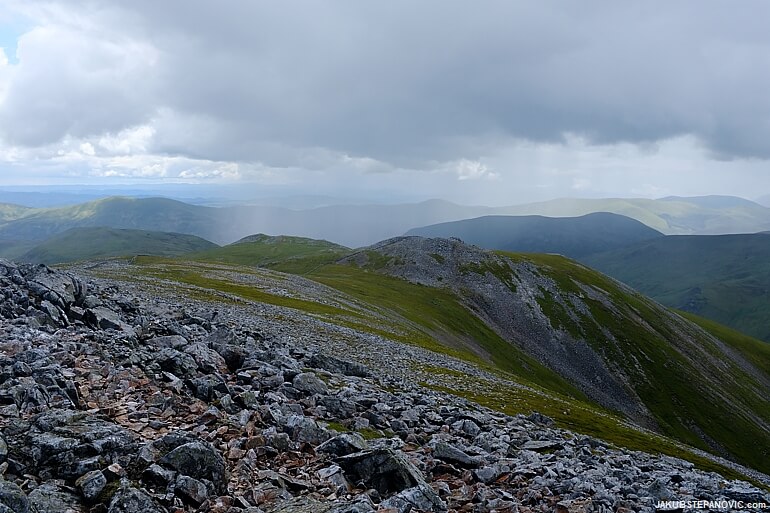 And so, we continued the hike in a downpour. 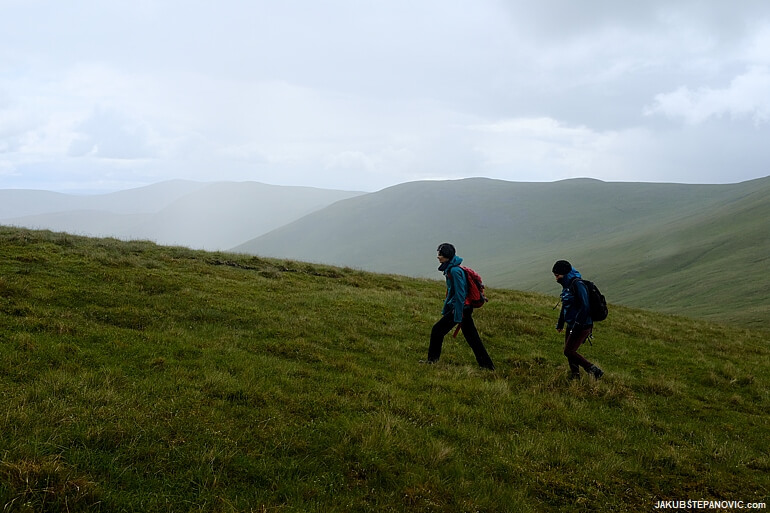 Thankfully, it ended just after I started feeling that my jacket is beginning to leak. Even better, the sun came back and helped to dry the soaked layer. 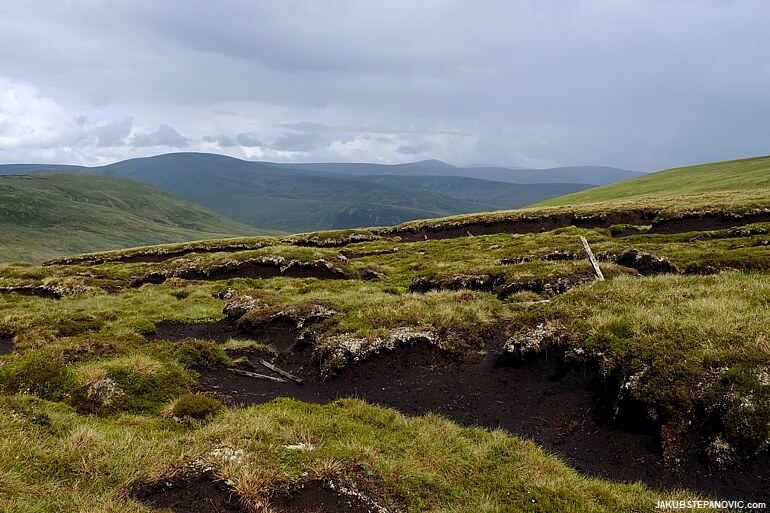 We entered a heavily eroded landscape when a large bird made a few loops above us. 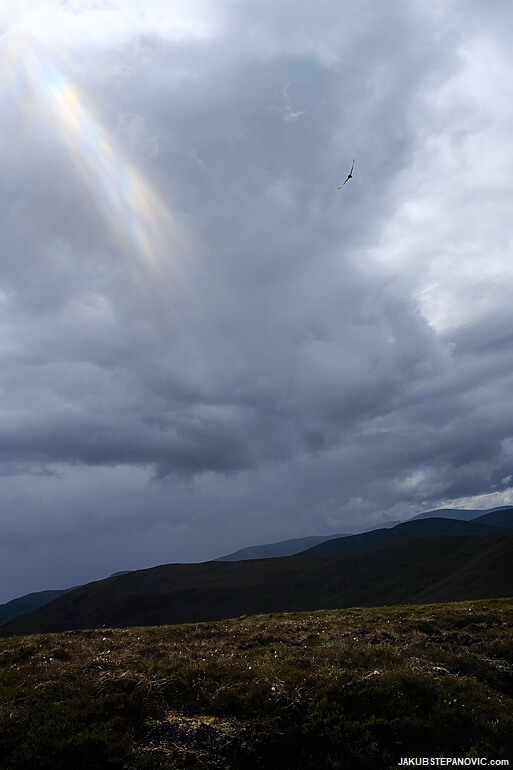 An owl! Earlier on the hike, we saw mountain hares, pheasants, loads of rodents, and some colourful insects. The list went on, as there were a few massive herds of deer, too: 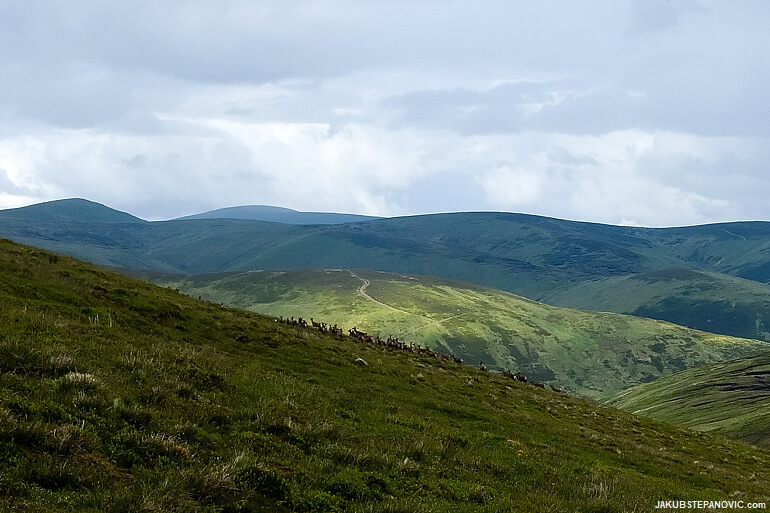 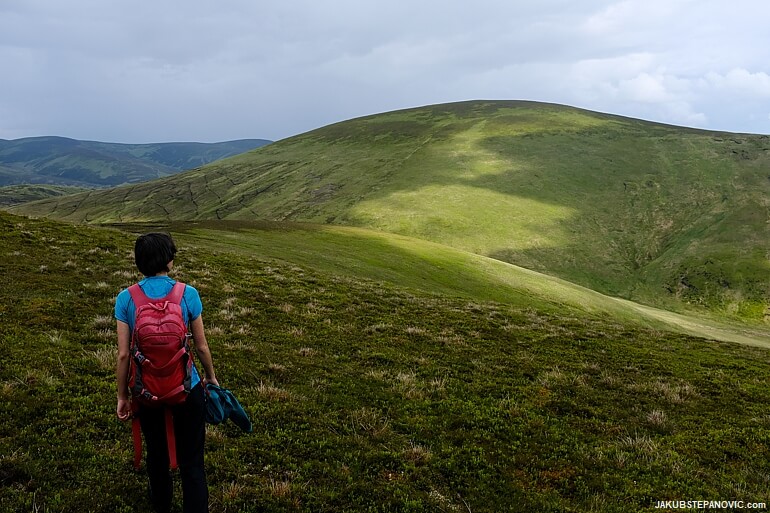 The last hill of the hike, Monamenach, felt a bit steep after the day of walking, But we took our time, and the hill rewarded us with an overview of the loop we did: 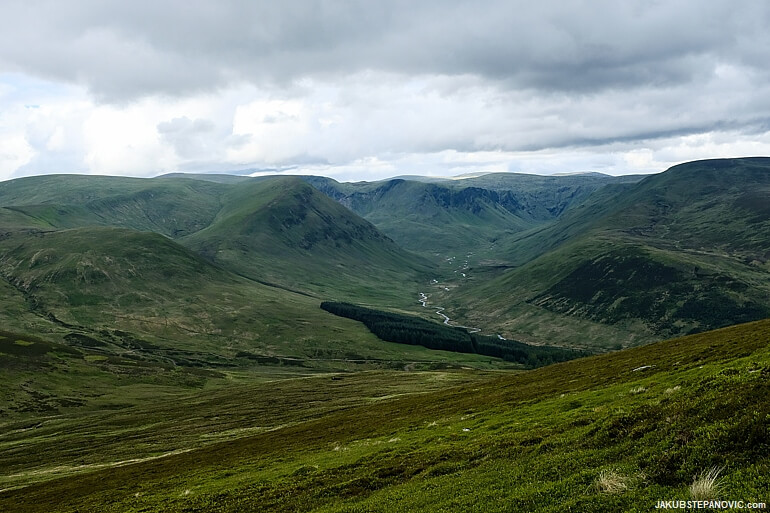 The weather was good, and the path going down to the glen made the descend easy. 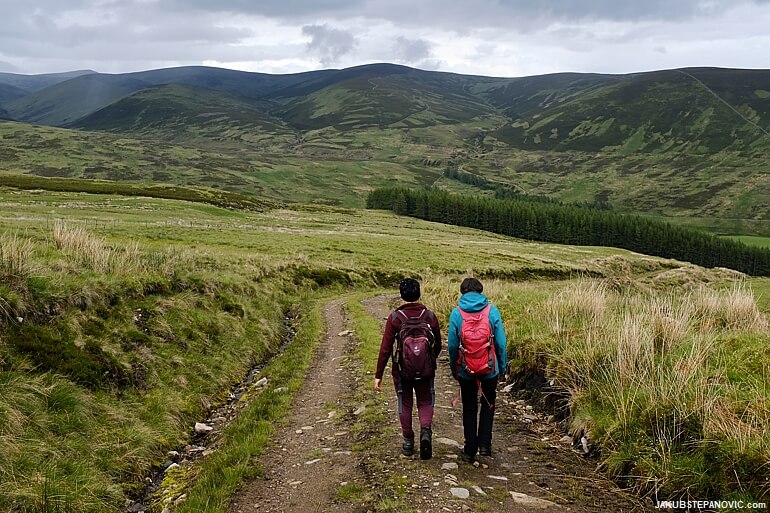 Great countryside shared with a great company, what a fine day this was.