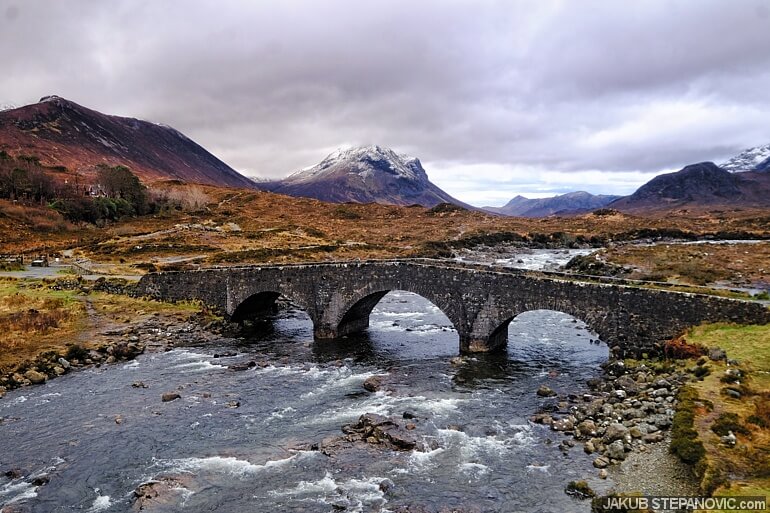 The second part of our wandering through the Scottish gems.
Contrasting with a clear day topped with a beautiful sunset yesterday, we woke up into a drizzly, grey morning. Never mind that, we went for a walk along the coastline towards Fort William, to see the Inverlochy Castle. 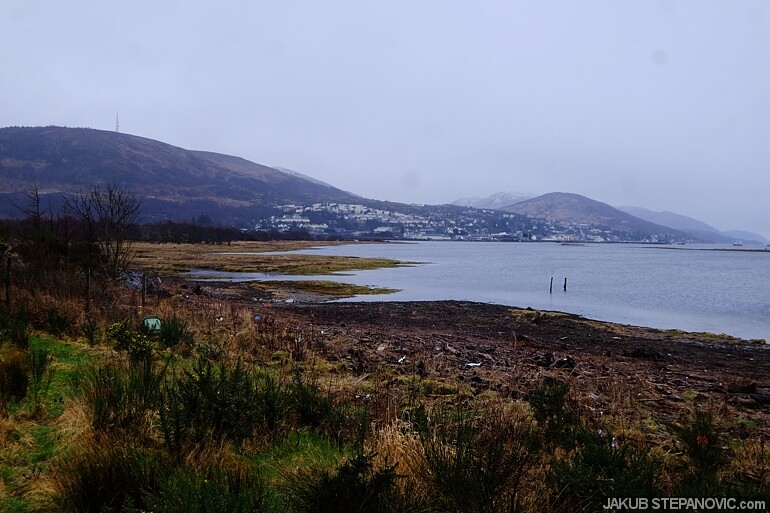 The castle is interesting because it hasn't been altered since the end of the 13th-century. It is also accessible free of charge, so checking it out was a no-brainer. 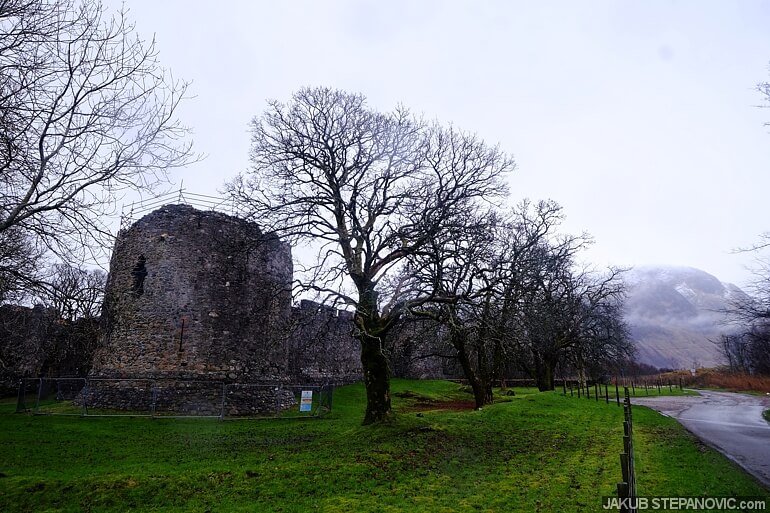 At this point, the drizzle beefed up, and before we got back to the car, it was proper rain. 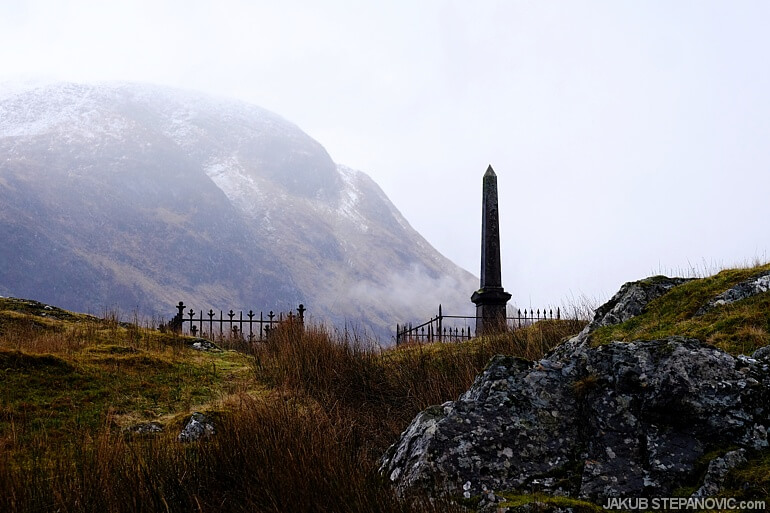 We departed in no rush, joining one of the side roads alongside the canal. This way, we had some nice views while avoiding the heavy traffic on the parallel highway. Eventually, we joined the A87, which runs between the canal and the Isle of Skye, our goal for today.

Gaining some elevation, the Scotch mist eventually evolved into sleet. Not that it would bother me.. 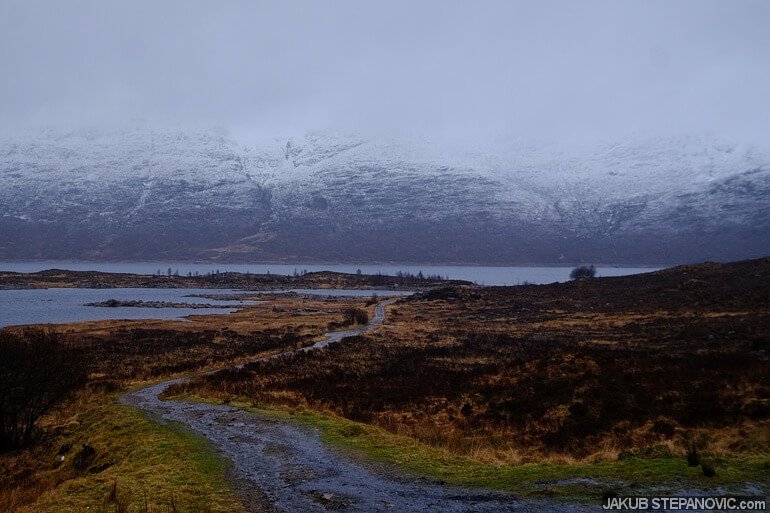 Here I stopped to enjoy the drenched surroundings. The weather portrayed local mountains in all their atmospheric rugged beauty and I couldn't be happier. 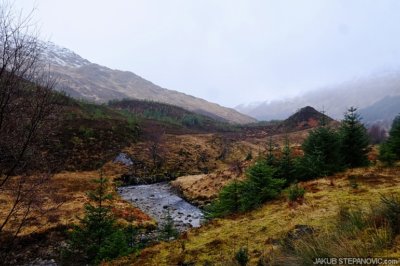 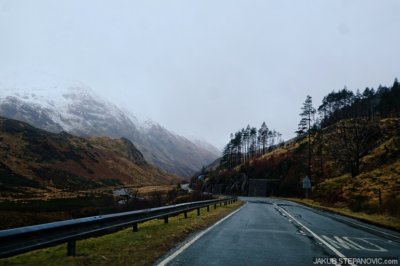 The current A87 is a well graded road, but one can spot some remains of the preceding road along the way, such as a few old stone bridges. A reason to take another break. 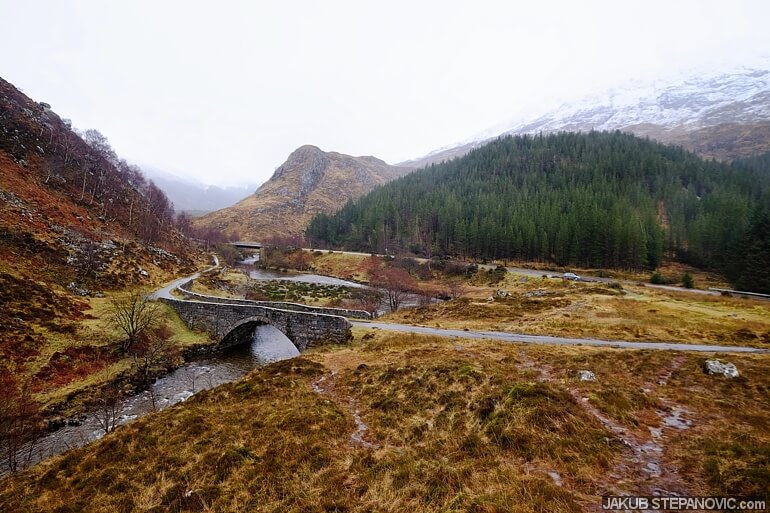 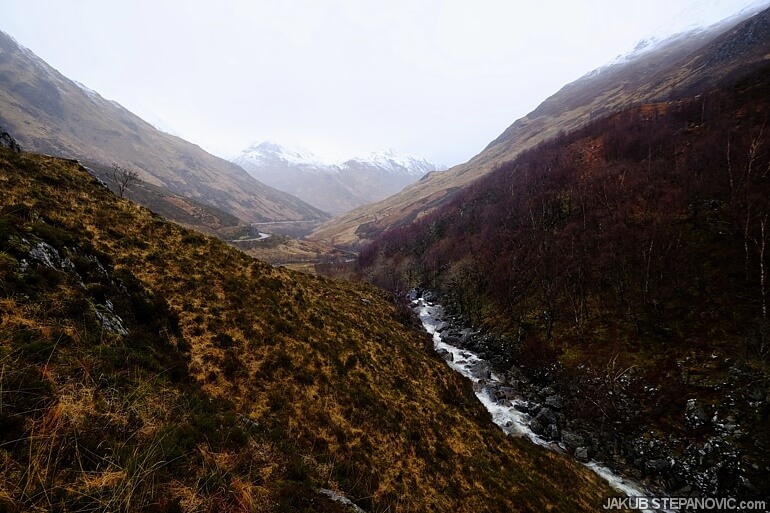 Descending towards the sea Loch Duich, the weather calmed down and we quickly reached our last point of interest before entering the Skye: the Eilean Donan Castle. 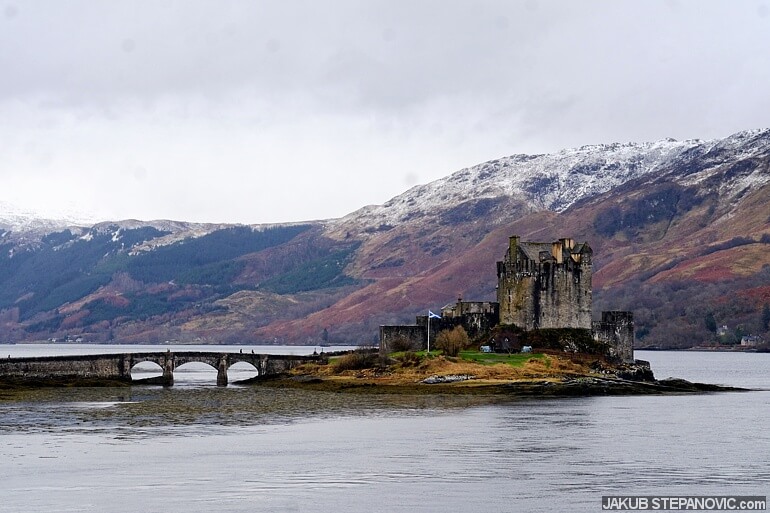 It is one of the most photographed places in Scotland, and it won't let you doubt why - no matter what angle you take, it looks pretty stunning. 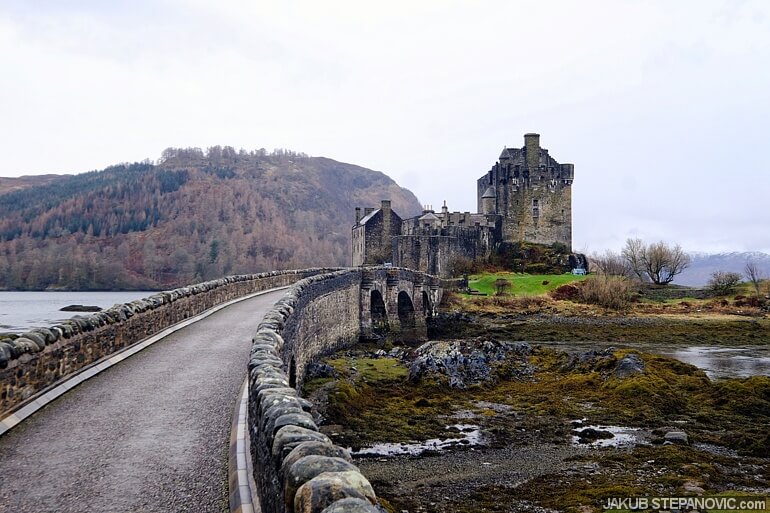 We saw only the exteriors, as inside was happening some posh wedding. But again, that's nothing to spoil the fun when everywhere you look are other visually pleasing scenes.

Not too far from the castle is a bridge which took us on Skye. 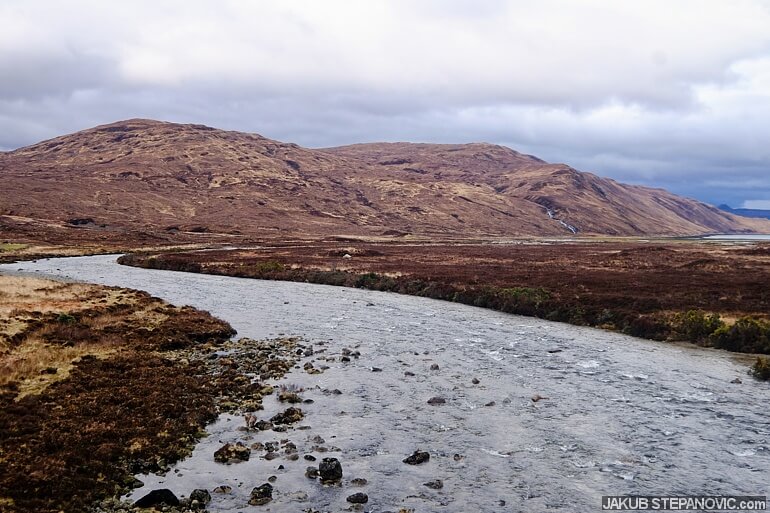 Our first stop on the island was Sligachan, a place with many things to experience.

First, there's another cool old bridge (photo atop of this article), then there's a hotel from the 19th century, where they serve good soups; but mostly, there's a great view on the dramatic landscape of the Cuillin mountains. So we took a short hike around. 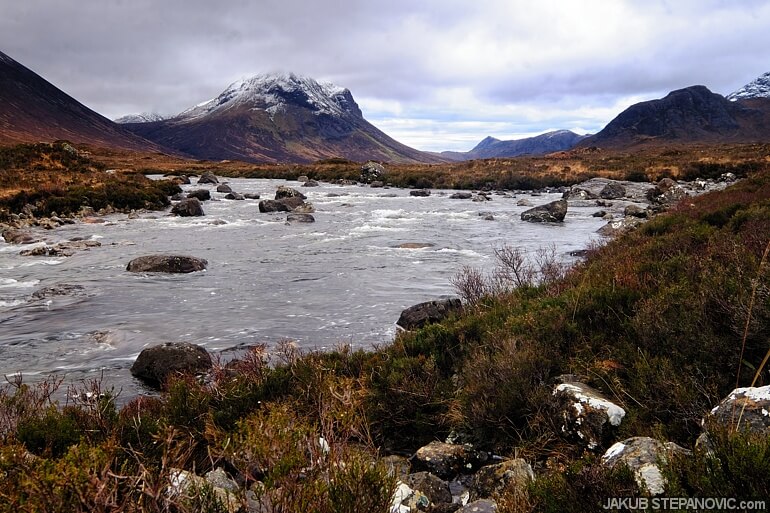 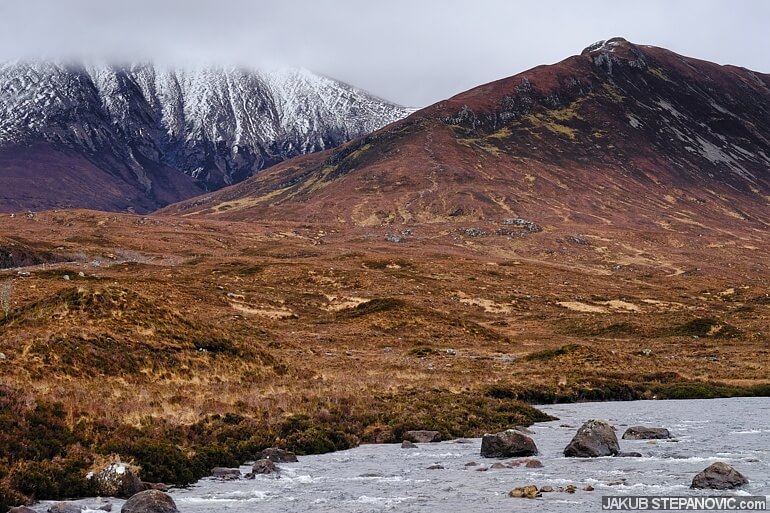 The Red Hills of Cuillin live up to their name. 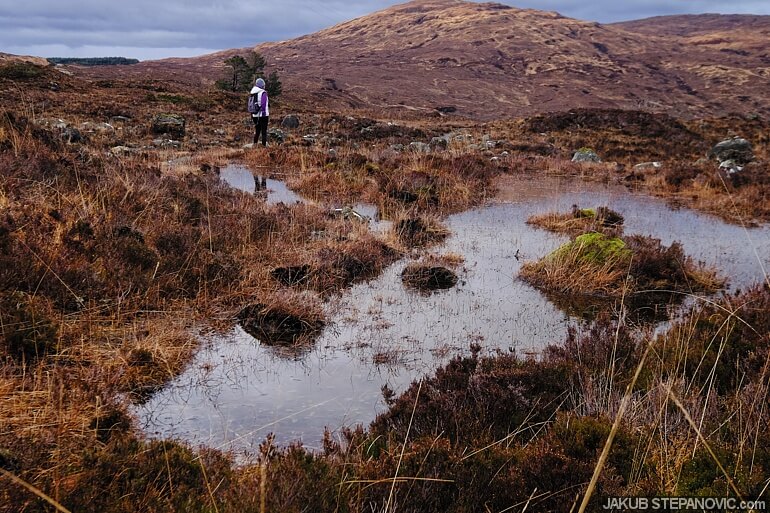 Later on we moved on Minginish peninsula to get lost. As it is a good habit of the Scottish weather, the "uglier" it gets during the day, the better the evening is. 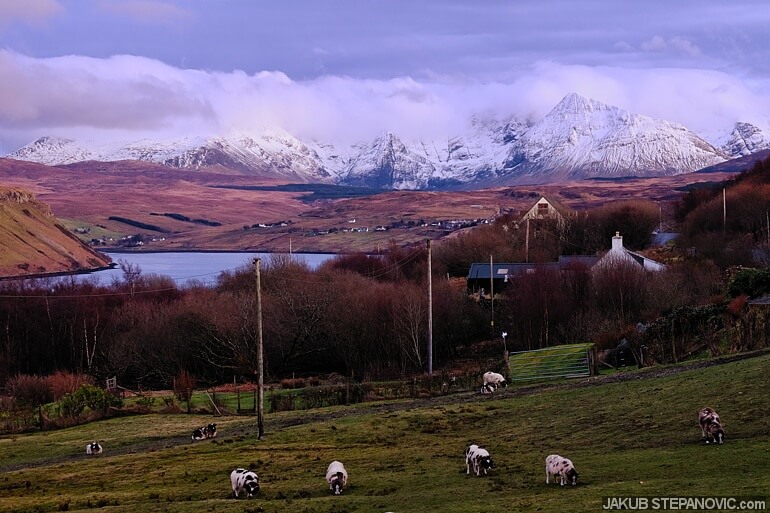 So it happened that the clouds went away, and we decided to find a route to the western coast. This took a few, so at the time we got down to Talisker Bay, the sunset was already gone. Oh well. 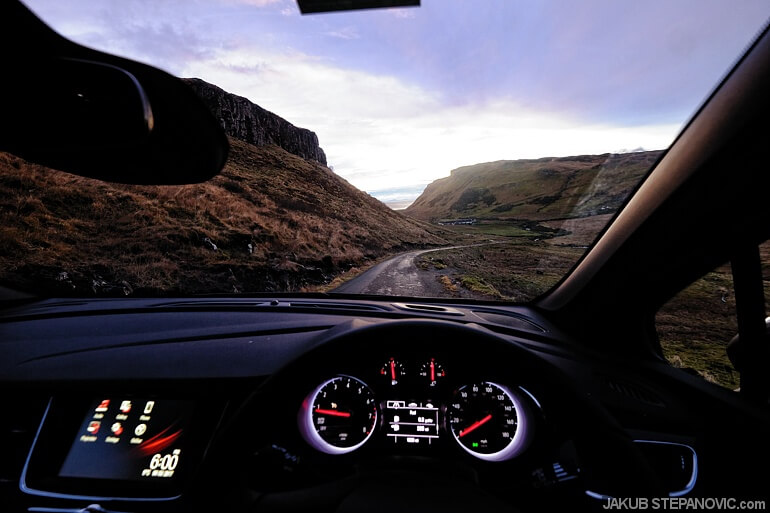 Still, it was rather charming, so we took a walk to see the beach anyway... 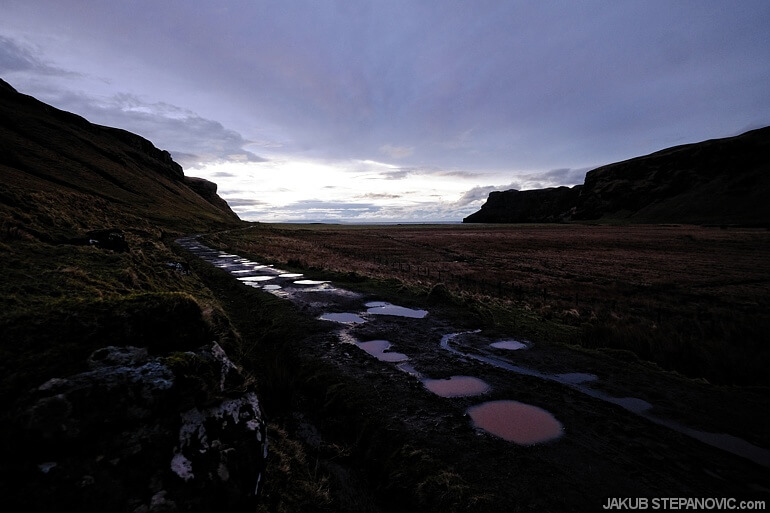 ..and to our surprise, we were welcomed by a good-sized waterfall. 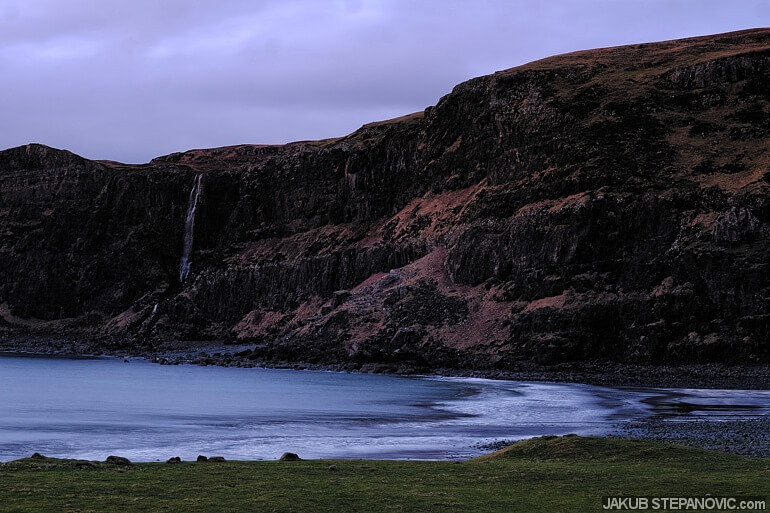 "Never give up without trying" reinforced. 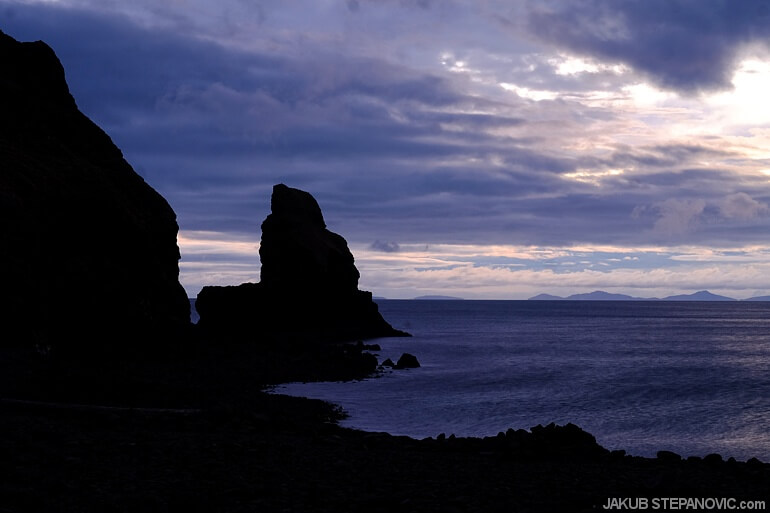 The bay is protected from fierce winds, hence proving as a sweet spot to spend the evening.

Once darkness fell, we drove to Portree, the Skye's largest town, where we scored an en-suite room for 40 quid and called it a day.

Click for the third and last day of the trip, covering more picturesque locations on Skye.