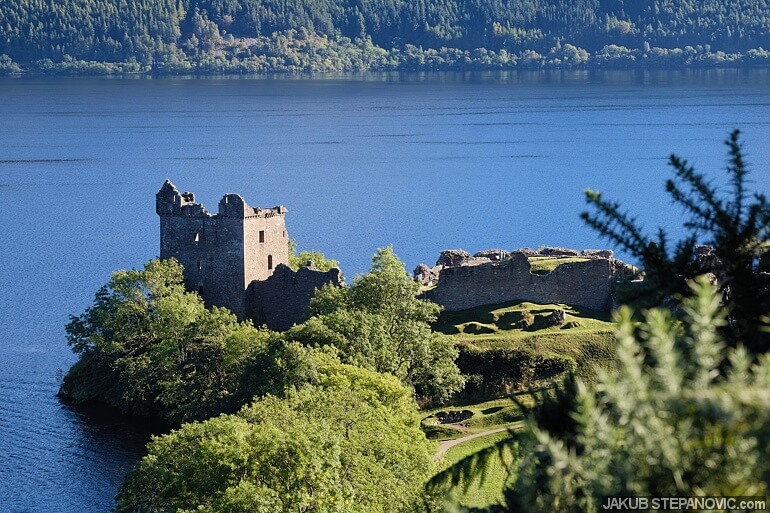 I was eager to take a closer look at some of Scotland's majestic places for a while now. Finally, I went on a journey to Loch Ness last weekend.

It was a tour coach, stopping by a few locations before reaching the loch. Normally I'd prefer to go on my own and be in charge of the whole program, but since the whole tour cost the same as a one-way train to Loch Ness, I decided to go for it.

We departed Dundee and headed towards the first stop: Kilmahog, a small settlement at the eastern border of the Loch Lomond & The Trossachs National Park. It is an old woollen mill, which serves as a good-sized gift shop now. Many tours stop here to allow passengers to buy coffee, keyrings, and so on. I wasn't interested in such items, thus I took a short hike nearby instead. 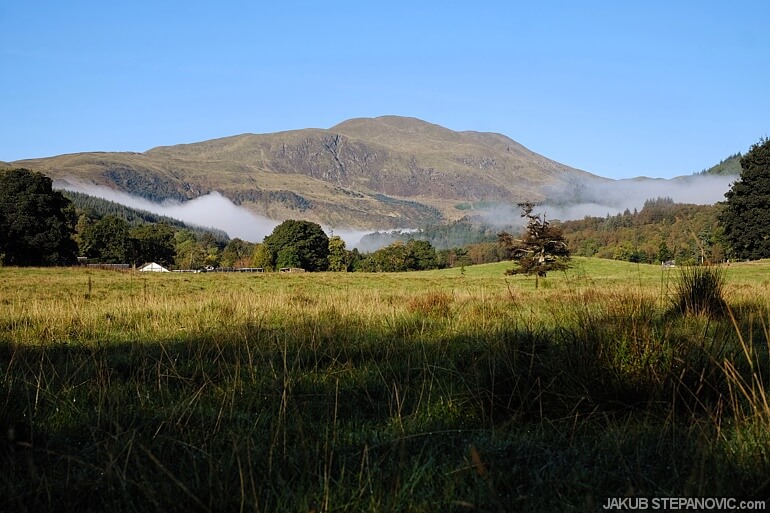 It was a lovely morning; the sun was waking up the frozen soil and creating neat scenery. A good start of the day. As we proceeded further north towards Fort William, the landscapes were getting better and better. The road is a gem: it navigates through narrow valleys known as glens, that are full of inhospitable swamps, waterfalls, and old railroad viaducts... 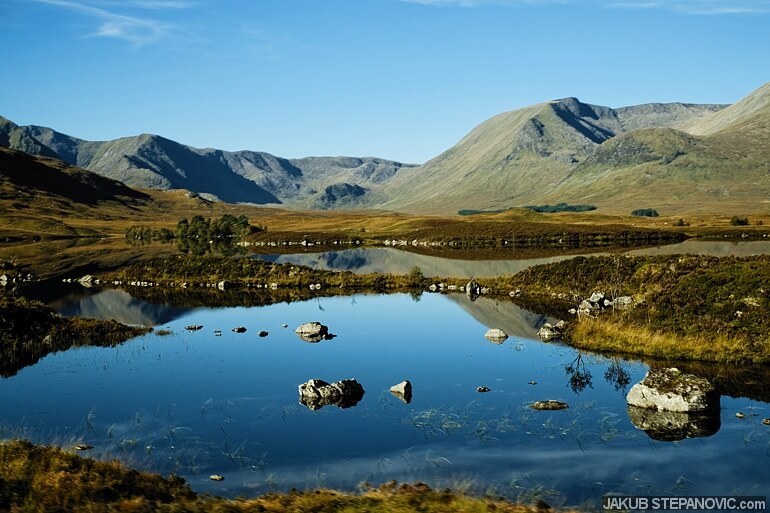 Lochan nah-Achlaise, near the entrance to Glencoe.

The bits visible from the road fueled my motivation to find out how would it look if I'd hike further into the wilderness. We were just passing by. That said, I’ll need to return here. 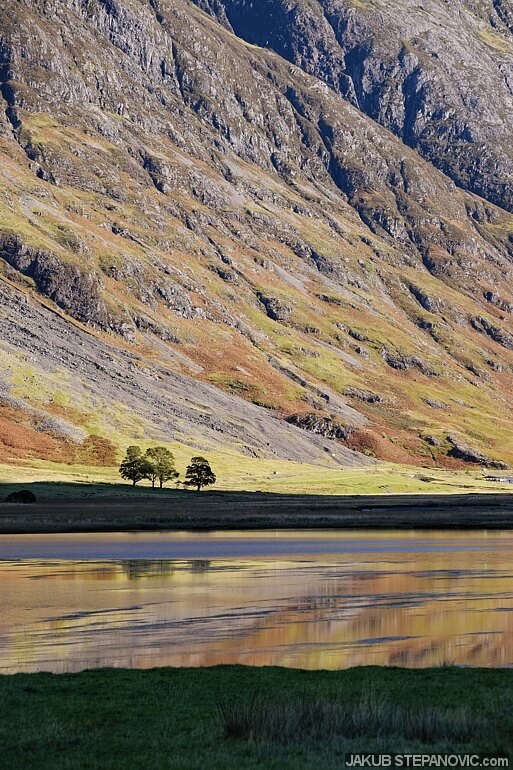 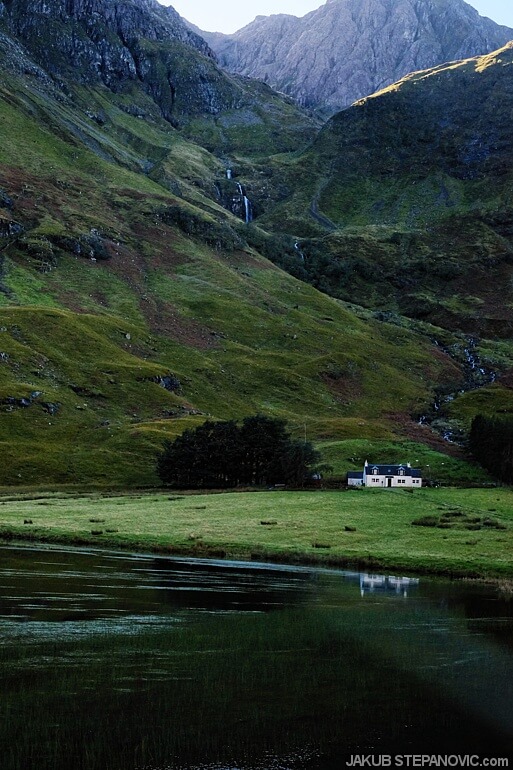 The local mountains are absolutely stunning. 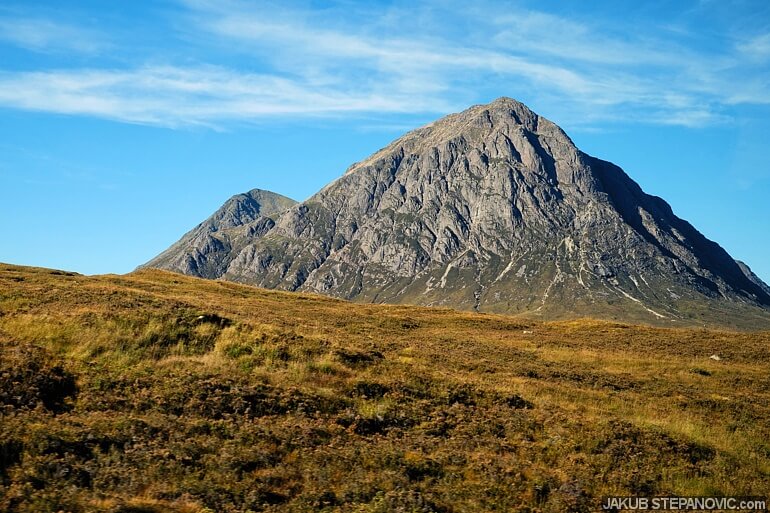 Buachaille Etive Mòr. Gotta love these names! In this part of Scotland, the street signs are bilingual, in EN and Gaelic.

Arriving to Fort William was exciting, as I knew its name a long time ago before I considered moving to Scotland: it is a legendary venue for downhill bike world cup. It felt great to see the town in person – although only through the bus's windows. It seems pretty; another place which will deserve to discover more in-depth. One day...

Our following stop was a lunch break in a small town of Spean Bridge. Since I can see a restaurant any day of the week, I was more attracted in some elements unique for the spot. When I browsed the itinerary before the trip, I found out that there's a Commando Memorial about a mile from the town limits. That was the plan, but since the break was only 45 minutes, I'd have to rush to get there and back. This in mind, I went to talk with the bus driver and arranged that they'll pick me up at the memorial, as it's in the direction of the Loch Ness. Yey!

You see, it's always good to do your homework and check the location you're planning to visit. Even on a we-will-do-the-program-for-you tour, always. 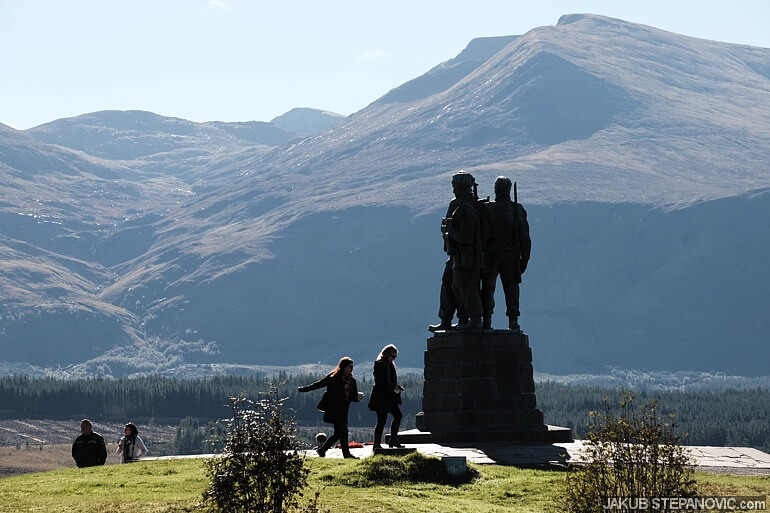 "United we conquer" By the way, the peak in the background is Ben Nevis - UK's highest mountain.

The monument is erected at a place that used to be the WW2 Commando Training Depot, commemorating its members who lost their lives during the war. A fun fact: the memorial was designed by a sculptor who taught at the same uni as I am currently attending. And as it's been all day, the outlooks to the surroundings were fantastic. 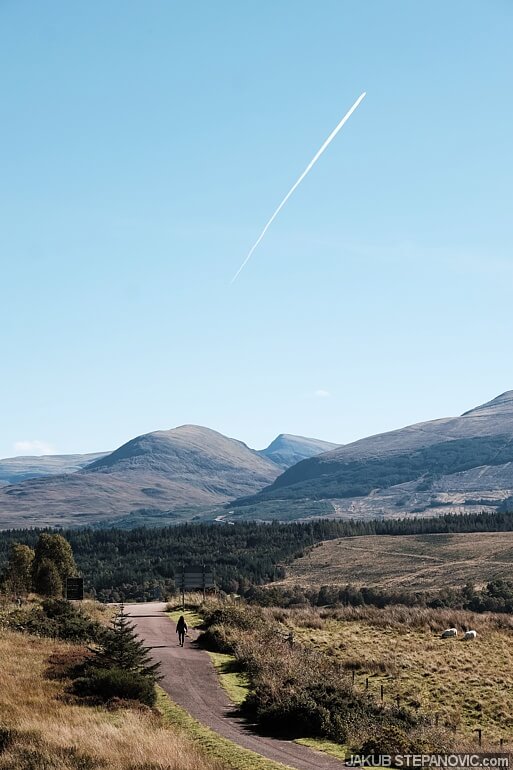 After I spent my break here, the bus came, reuniting me with the group. We continued along the Caledonian Canal to the Loch Ness, the largest lake in Scotland by volume, and of course, the Nessie's home. It is also one of the many Scottish spots with medieval ruins: the Urquhart Castle – the destination where we stopped. 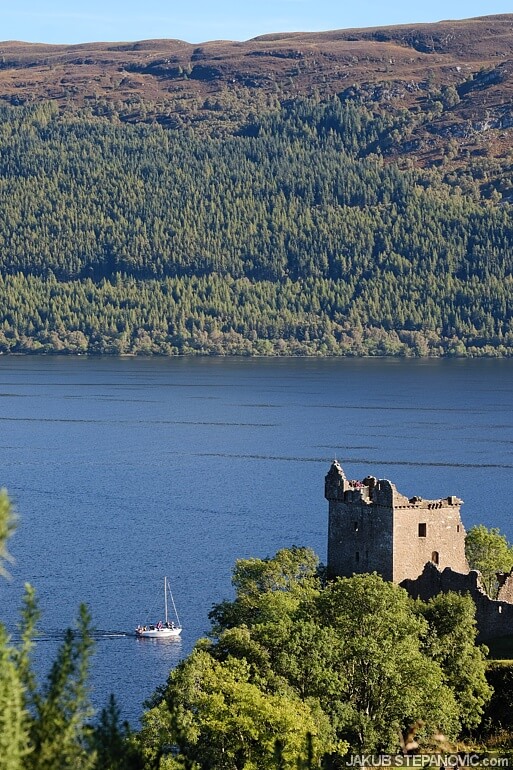 The group divided as some went on a boat cruise, while the rest had time to spare in the visitor's centre. I opted to keep my money and explored a portion of the coastline on foot. 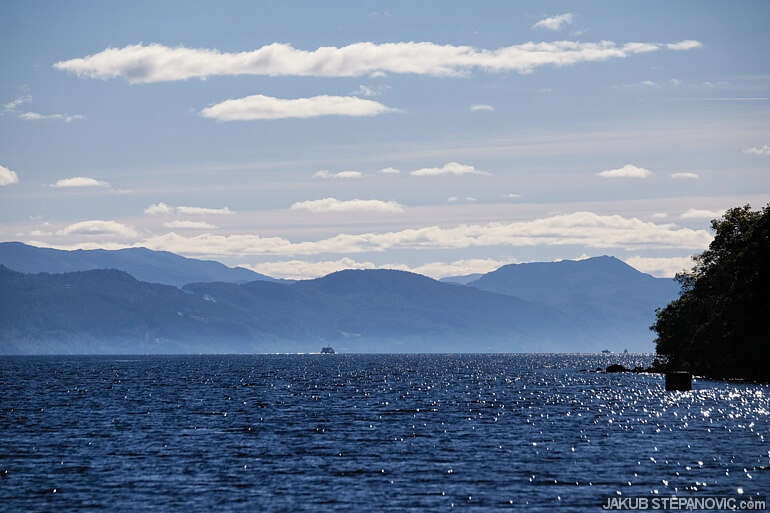 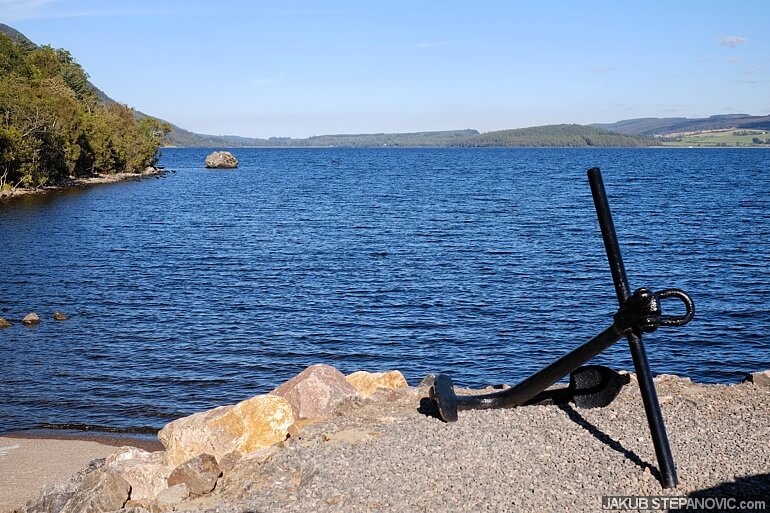 See that big rock up left? That's where I went next.. 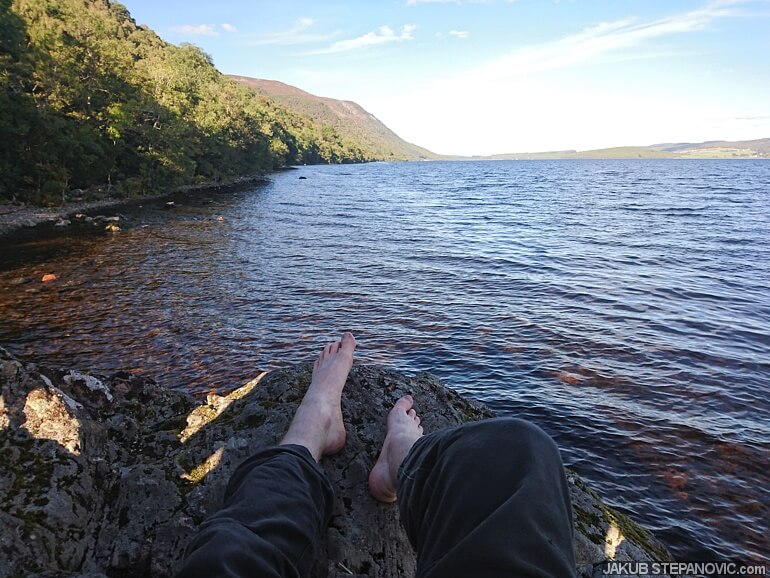 If you're looking for a pace with a stress-reset button, this has one.

After some time soaking up all the goodness, it was the moment to board the coach again, as it began its route back to Dundee. We went through Inverness and joined A9, the longest road in Scotland. It is, again, surrounded by appealing features, so it went rather quickly.. 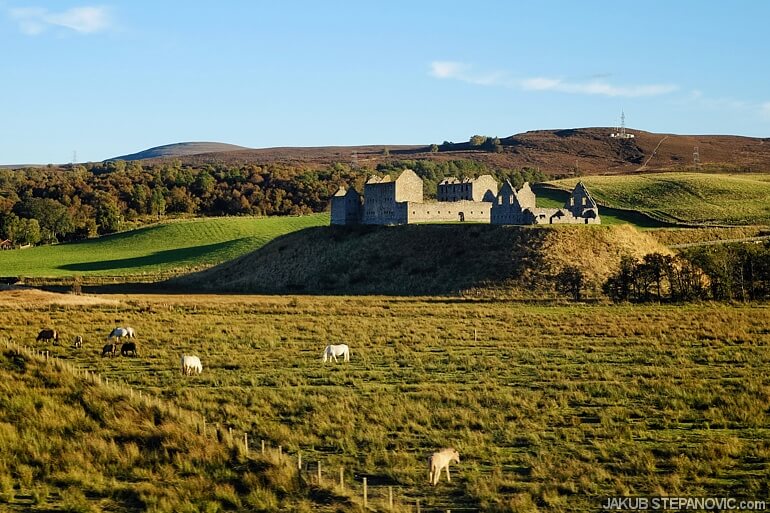 If you liked pics of landscapes above, stay tuned for more posts from this area, I am already planning journeys to explore more of it. Meanwhile, you can also visit my blog archives for more stories that you might enjoy, such as my trip to the Lake District.

Wow, Jakub! These shots are stunning! What fun.

So inspiring! Love the pictures 🙂