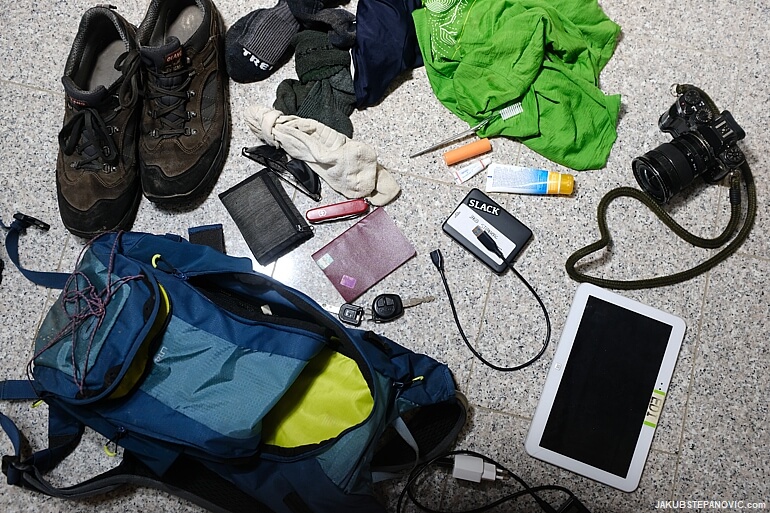 When traveling, I've been advocating "carry less, worry less" philosophy for years, but what does it exactly mean?

Pack lightly - something which can be easier to say than to do, but this summer I had a chance to put it into a test: Last two months I've spent on a trip across Europe and China. On average, I changed the place where I slept every two days. In between, I used trains, buses, and had 14 flights through 10 airports. During the journey, I swam in the sea as well as reached heights of over 4400m / 14440ft above it.

In the past, people asked me how to pack and what to bring; so I thought this is a perfect time to share what I had during the trip. Obviously, packing depends on your destination, the time of the year, and what do you want to do there. But as mentioned, this trip was rather complex: temperatures were anywhere between 10c (50f) to 40c (104f), and I hiked through mountains and also went to theaters in a big city. I think this gives a decent overview. So, I will focus on what I got, how I fitted it, and which luggage I had. Here we go. 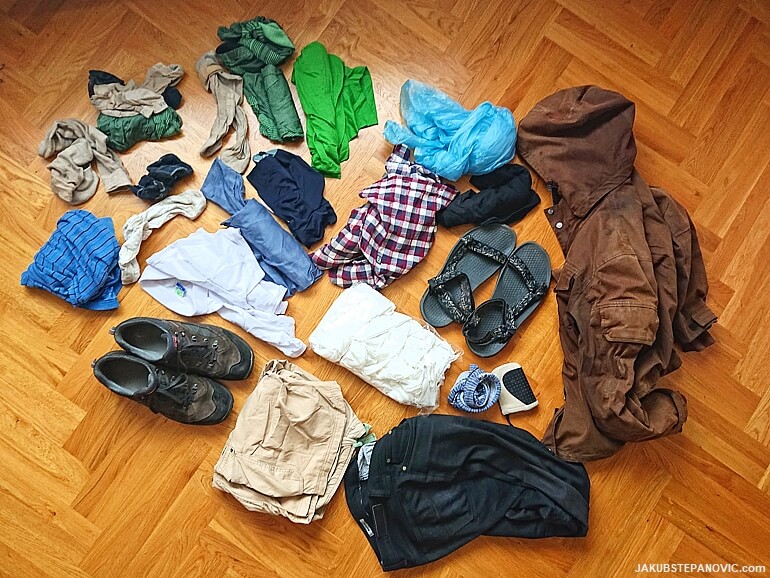 Now the other, more fun items: 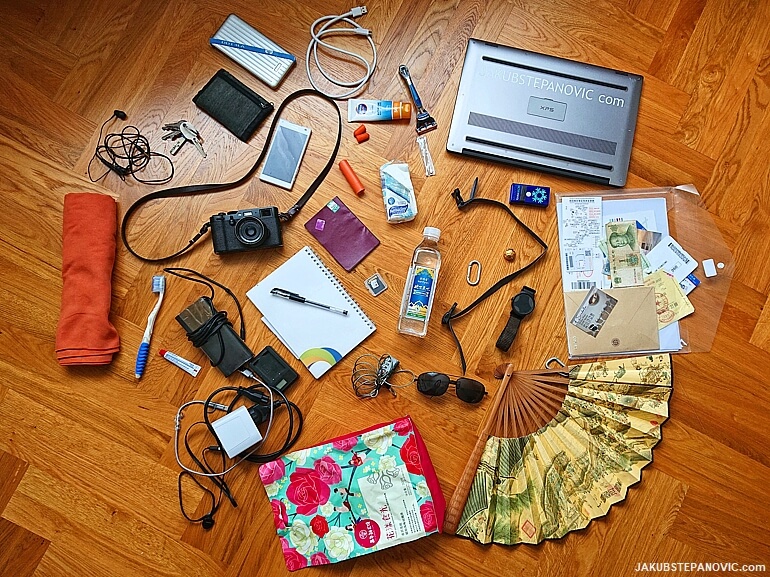 ...and I still had some extra space for souvenirs, like that Chinese fan and a package of local sweets. That said, it is good to leave a bit of space when you pack.

* : All made from polymer - so you can wash it on the go, and it'll dry in no time.
** : The key here is to have multiple materials, not multiple colors. Some of these were from cotton, others were made of synthetic fibres, great for scorching days. I had one woolen t-shirt, which is warm as a hoodie but takes no space.
***: To attach stuff on the backpack, and to fix issues. For example, I lost four kilos (~9 lbs) during the trip, and as I didn't have a belt, so I used the rope. Padlock and the steel wire are handy to secure your stuff on a busy bus journey, or while sleeping rough.
****: Mints turned out to be a lifesaver in areas with heavy air pollution.

The best way to stuff clothes is to roll them. It keeps the backpack organized, and to roll clothes take no time.  In my opinion, it is far more efficient than to fold them. When you have a small backpack, you don't need to think about organizing things much. Just fit it in. Speaking of backpack...

Here is it, fully loaded: 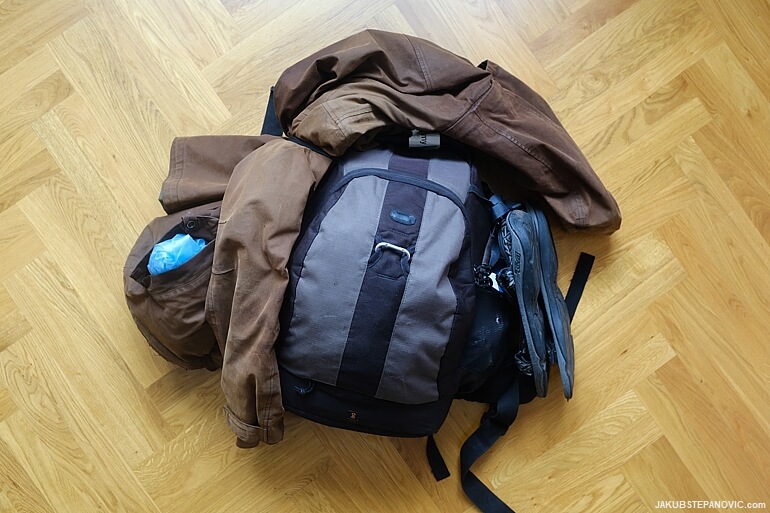 The key is to have one piece of luggage, not two or more. It is far easier to carry around - not just on your back, but also when entering public transportation - you don't need to lift multiple pieces to those overhead storages, you don't need to keep an eye on two (or more) things, just one. It saves you loads of hassle.

Backpacks are the way to go, as you can walk with hands free, go upstairs, everywhere - something which can be tricky with a suitcase. Also, comparing with suitcases, backpacks are far more comfortable as a pillow, when you sleep somewhere at a train station or so. Selecting a backpack that suits you is crucial. Nowadays, thankfully, there are plentiful of companies that make durable, lightweight models in many sizes. I prefer to have a smaller backpack and deal with it on a modular basis, so as you can see, I strapped my jacket, shoes, the water bottle, and some other stuff from the outside. It might not be as sleek, but it gives you fast access to things you might need on the go, without the bulk of a bigger backpack. A similar setup proved itself numerous times. Here's how it looked during my trip to Italy in 2016: 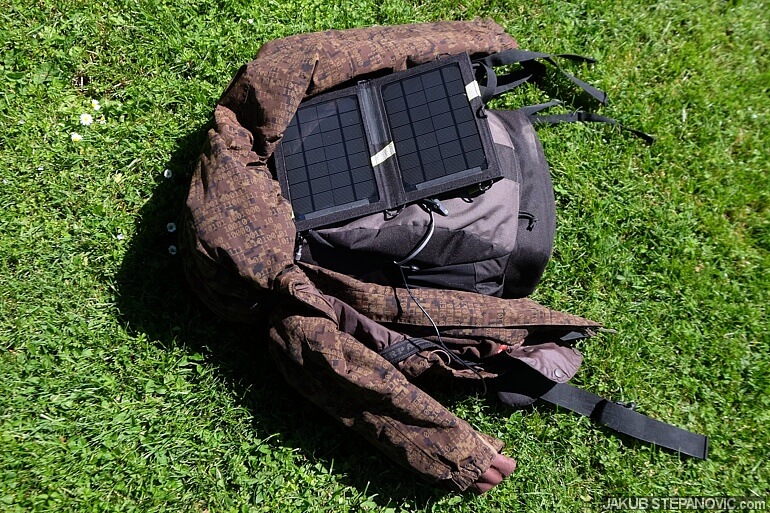 Different jacket, same backpack. That time also with a solar panel strapped on it, charging my stuff while walking around.

I bought this backpack in 2011, and if I remember correctly, it was with me across 16 countries, and I only had to sew the zipper once. It has a built-in rain cover a bit bigger than the backpack, so it can take the stuff strapped on it, when the weather brings hell. 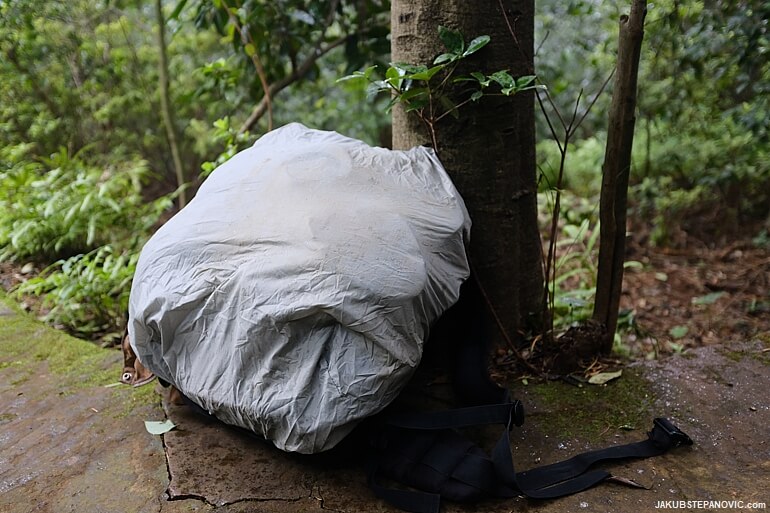 During a storm in forest near Kunming. Note the shoes underneath the cover.

There you have it. It is not rocket science. If I'd go only to the mountains, I'd replace those shirts with rainproof trousers and more thermal layers. If I'd go only to the city, I might take different shoes and jacket. If I'd go in the winter, shorts would go to make room for a sweater. A different situation is when you want to sleep in outside for most of your trip - for that, you'll be better with a sleeping bag and some pad which take more space. But even then, it is possible to have a backpack under 10 kilos (22lbs). No matter what, there's no need to carry a boatload of stuff, which you end using once, or not at all.

As of the journey I just returned from, I'll write some stories about that later. Stay tuned on my Instagram, Facebook, or Twitter; thanks for reading!