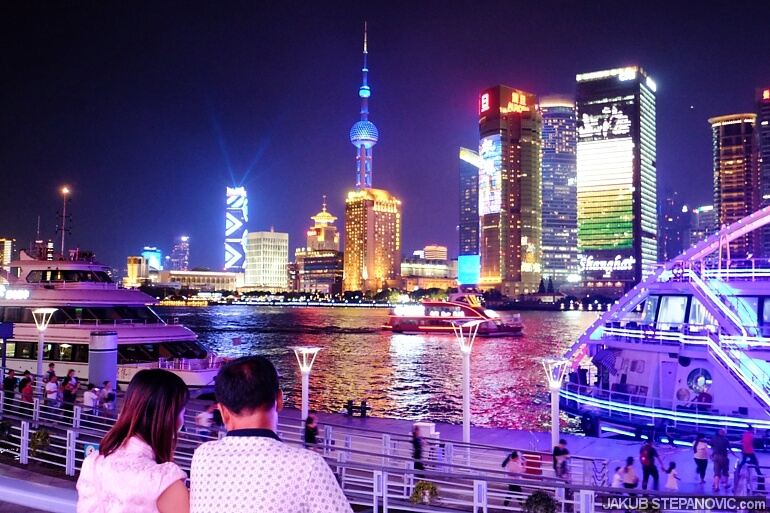 Whenever I am in a new city, I like to get into its downtown area and just wander around. Not having any specific route or a goal is an excellent way to get easily excited, practice orientation skills, and to get to know the place a bit. Here in Shanghai, I did the same - this is how it went:

My vague idea was to browse the streets near the People's Square and then see the highrises across the Huangpu River in Pudong's business district. But when I got out of the tube, it was clear that there's no need to cross the river for the highrises. 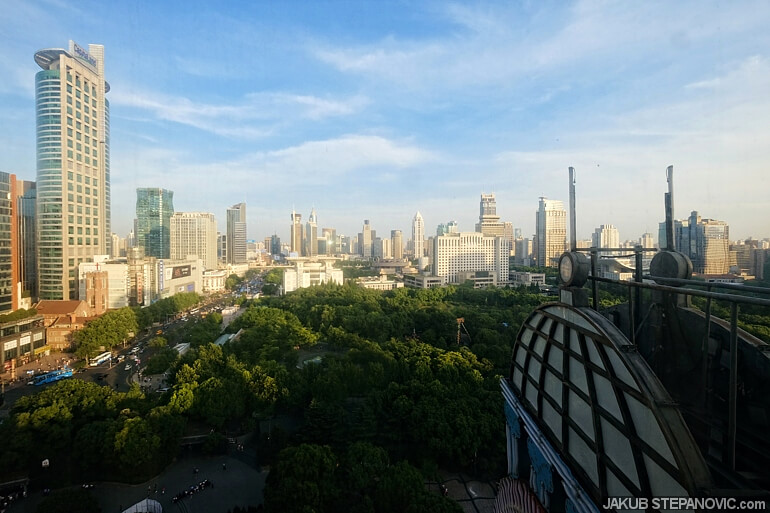 It shouldn't be a surprise, as Shanghai is among the cities with the highest number of skyscrapers in the world; still, looking at the scale of the buildings in person was pretty cool. 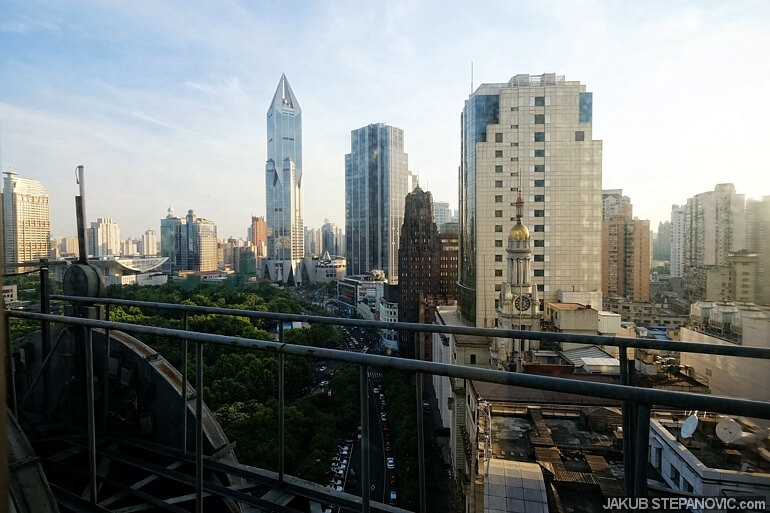 That modern pointy building in the left half is 285m / 934ft tall "Tomorrow Square," which is not even half the height of Shanghai's tallest skyscraper (!). If buildings here have 150m / ~500ft, they hardly even make it through the skyline - There's over 100 structures taller than that.

That day had nice weather, and being surrounded by these views, I was in no rush to get towards the river. 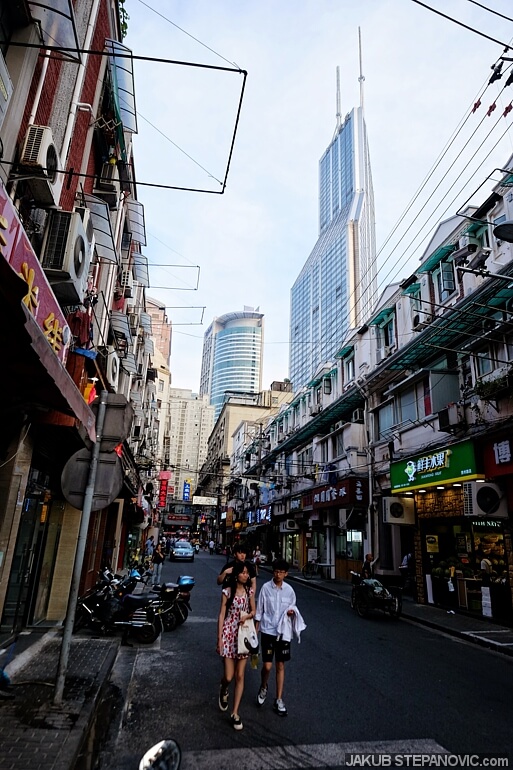 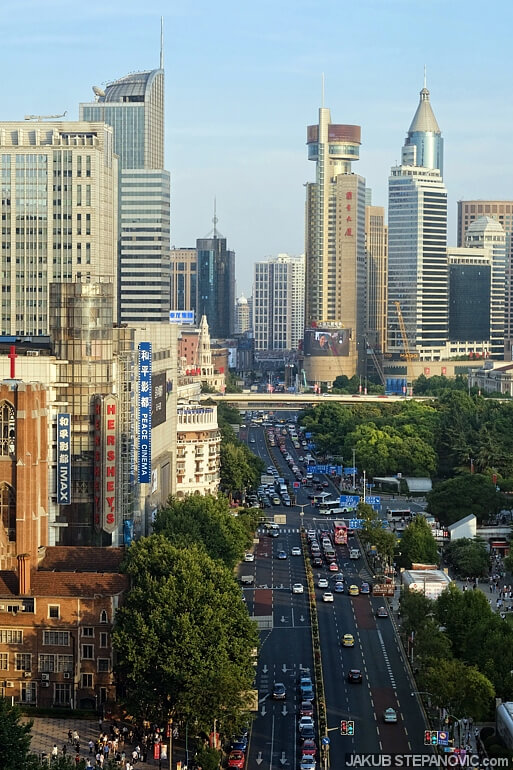 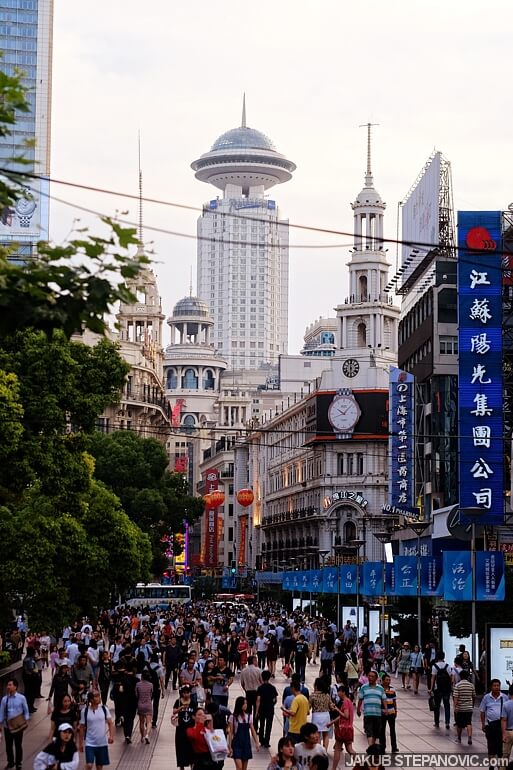 Slowly but surely, I was heading there. My idea was to watch the sunset from one of the observation decks there. 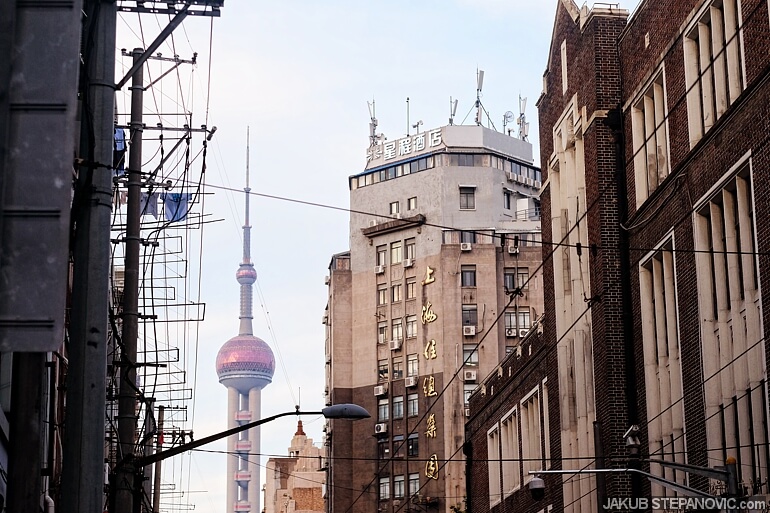 Oriental Pearl, a 470m / 1,535ft Observation and communications tower over at the east bank of the river.

However, then I got on a crowded Century Square... 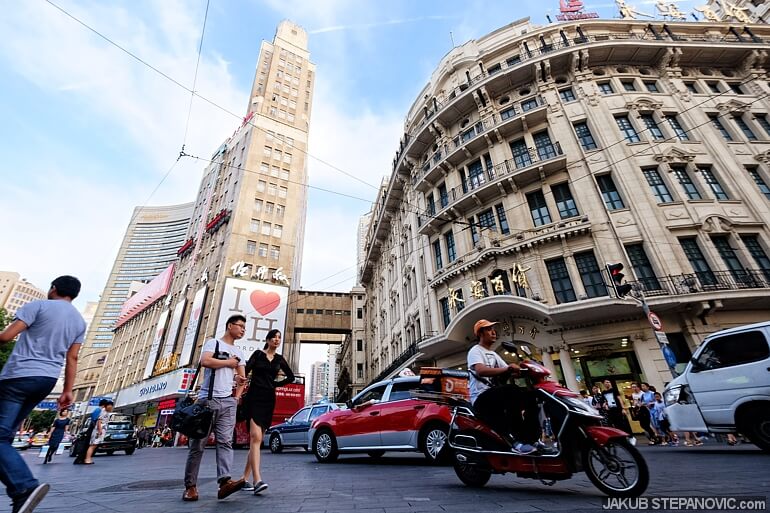 ..from which I've explored a few narrow side streets.. 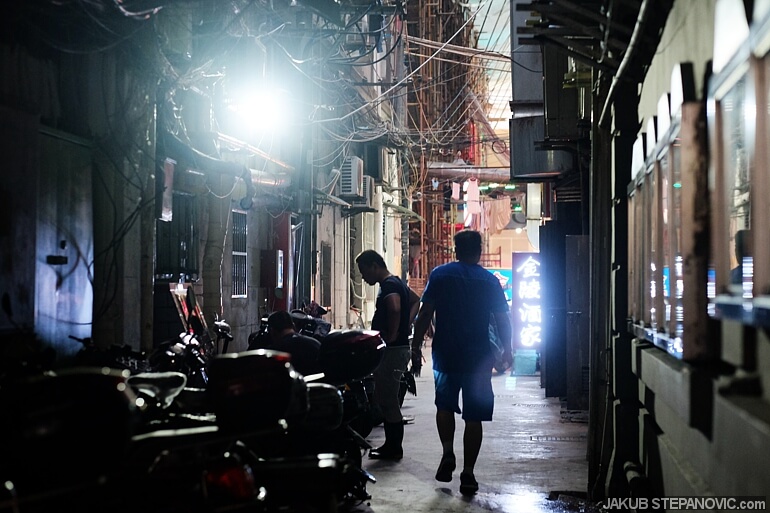 ..and before I knew, it was dusk. The whole of China is in one timezone only, so here on the east coast, it gets dark rather early. 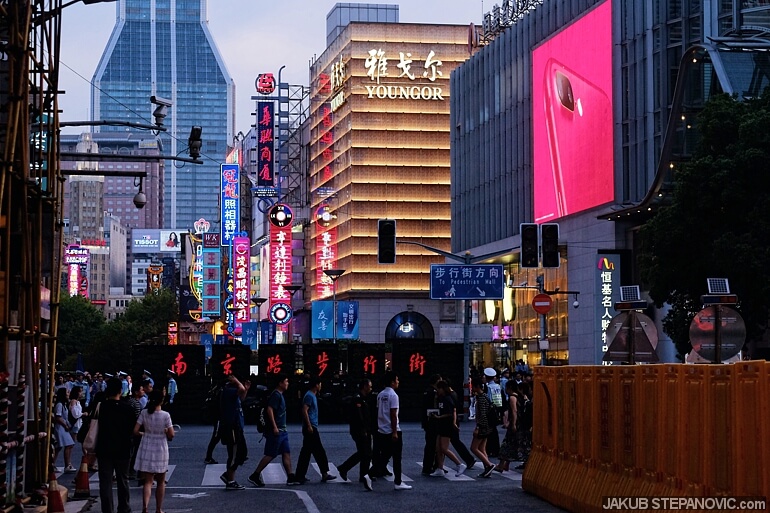 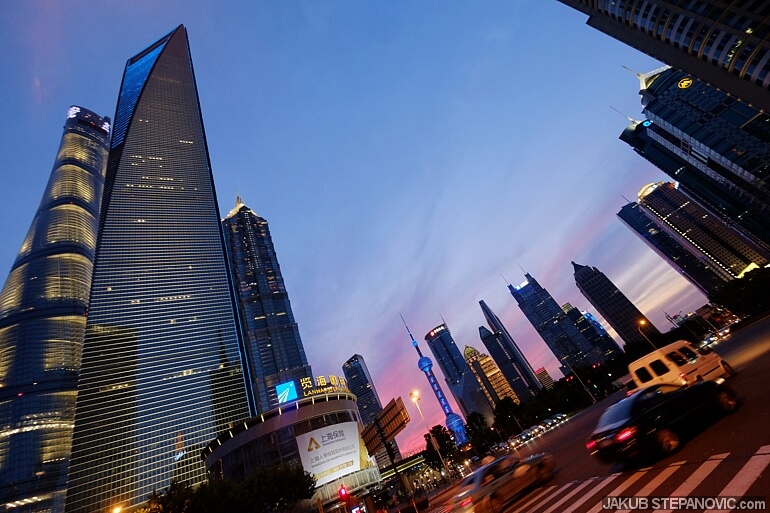 Since I got there later than expected, I stayed on the ground level and just strolled around the district. On the one hand, I was a little sad that I didn't make it in time because the sunset was indeed pretty. But on the other, I was thinking, "It took me over a year after I moved to London to see the top of the Shard (London's tallest building), I have time to do it later."

The area was a tad less busy than I've expected it to be, but it was a weekend night, so most of the businesses were out of hours, and the main centre of tourist's nightlife is back over the river. I am excited to return during the week to see what it's like. 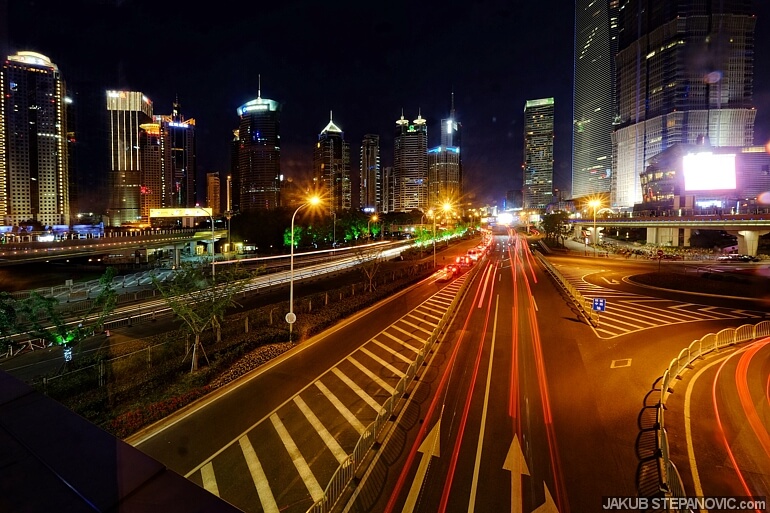 The buildings around have various levels of lighting. Anything from partly enhanced contours to fully programmed led panels covering the whole facade. 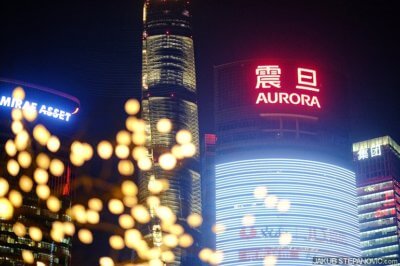 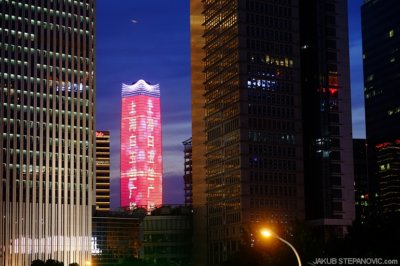 This trend increases towards the riverfront and the river itself, where some cruise boats look more like giant mobile lightning stages. 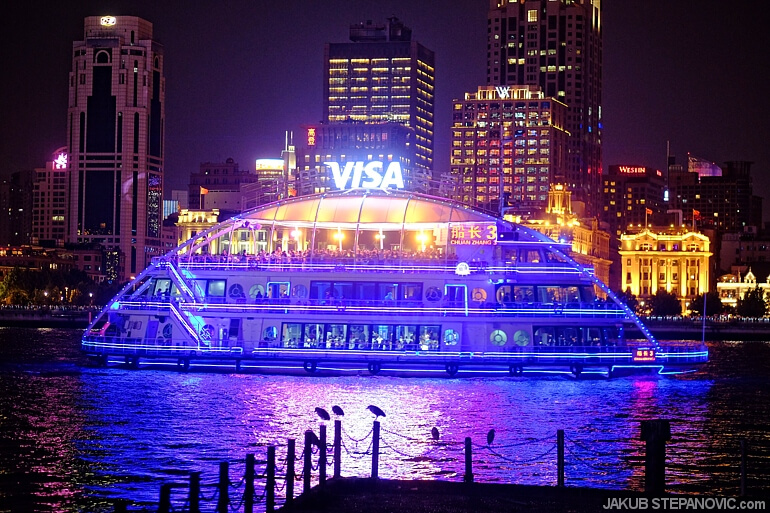 The whole flashy, colourful, and bright set left a similar impression as Las Vegas; only the city here's much bigger and is focused more on financial markets than the entertainment industry. 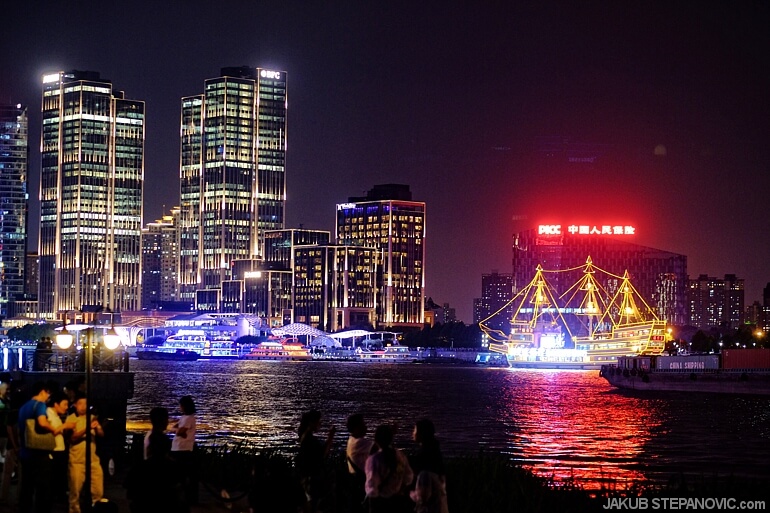 sailing vessel in front of the Bund

To return on the west side of the river, I opted to take a ferry. It brought some good memories of ferry transfers I made back in New Orleans. This was quite an experience: the ferry is much cheaper (it costs ¥2) than any sightseeing cruises, so many tourists use it to see the city from the water - the transportation aspect is secondary.

That said, when the gates of the pier opened, people started running to grab a spot on the open deck upstairs the ferry. I didn't expect that, so when I got there, all I saw was others' heads. It was all right though, as watching all the people enjoying the cityscape was entertaining too. 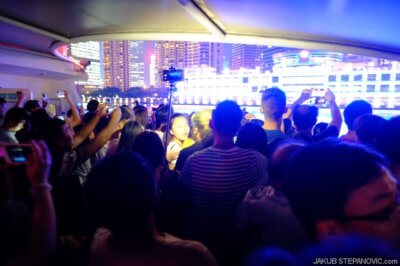 Just as the subway in a rush hour, this is nothing for people struggling with personal space. 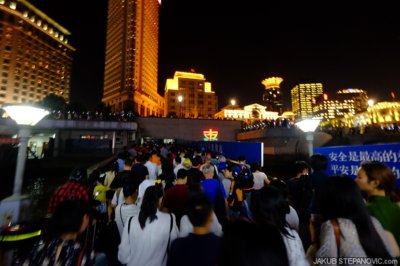 The crowd leaving the ferry. A lot of us were there..

The other side welcomed me with nice, saturated scenery to look at... 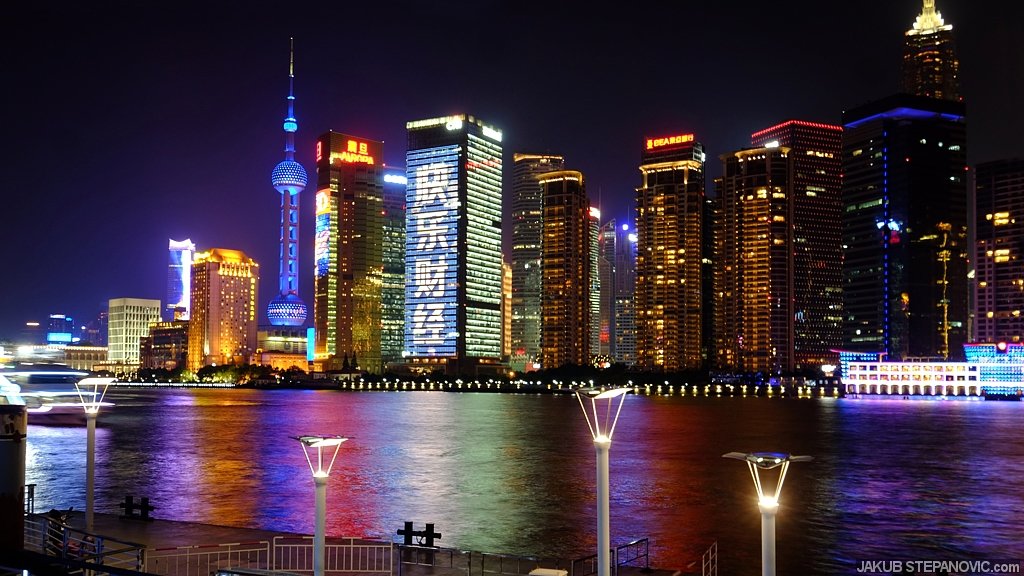 .. and I continued my walk in the area towards the Bund's Financial district. There, one could finally appreciate the enormous size of the triple-adjacent super-tall buildings in Pudong. When you are standing below them, all you do is twist your neck to see the top, but it takes a distance to show how tall they genuinely are. Look at the following picture, and notice the buildings under the Shanghai Tower and WFC. They might look like toys; but in fact, they are properly tall. That's some insane engineering, right there. wow. 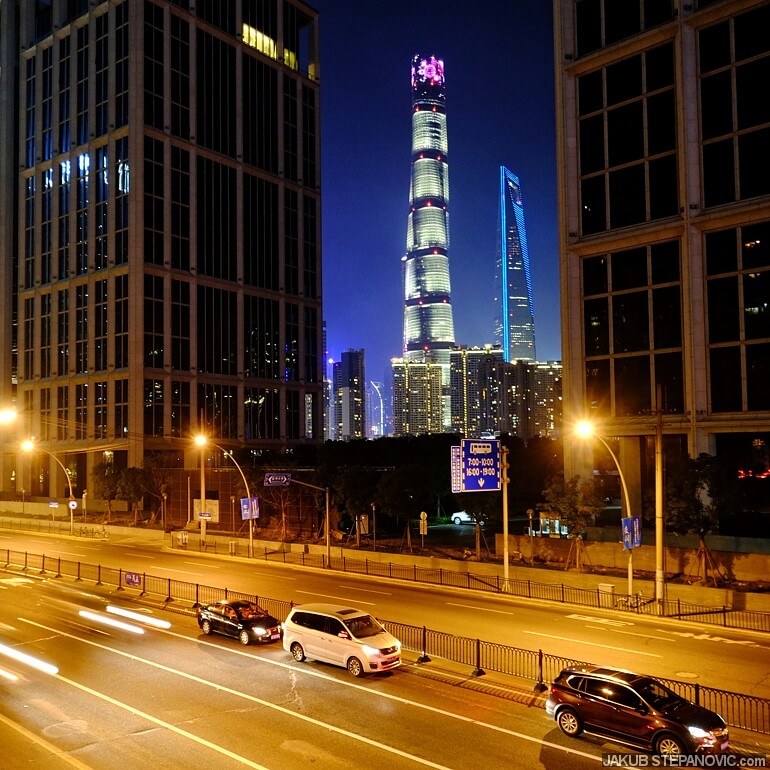 From here, I stumbled upon one of the local historic districts, so I kept on exploring what's what. At first, it looked like it's too late already, and there'll be not much to see at this time. But the further I went, the more it became clear that this was worth the walk. 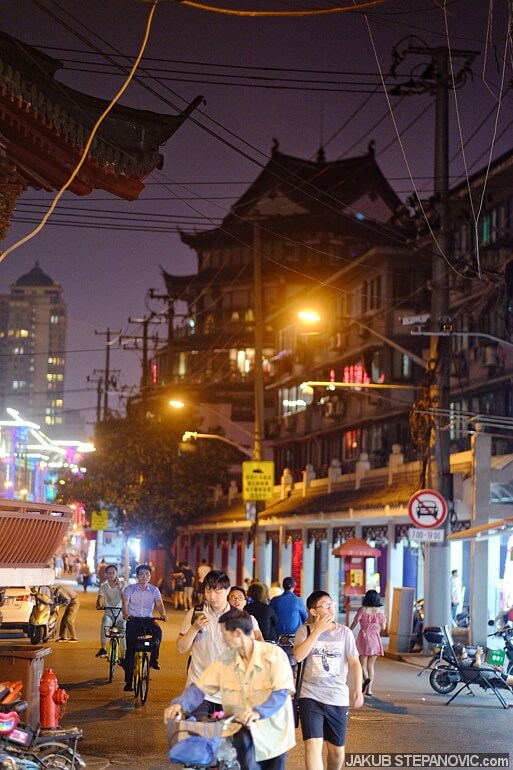 While it would surely look great during the daylight too, I was nothing but pleased. 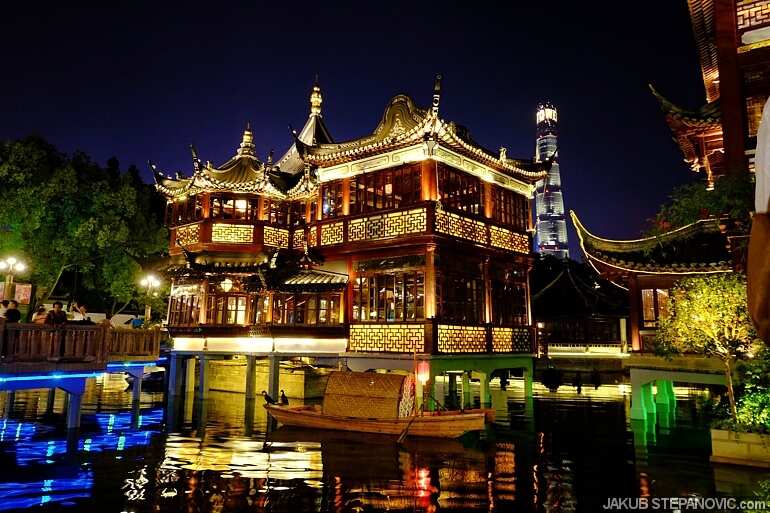 The Temple of the City Gods, or the City Temple of Shanghai. An interesting location with roots in the 15th century.

A good way how to end a day. 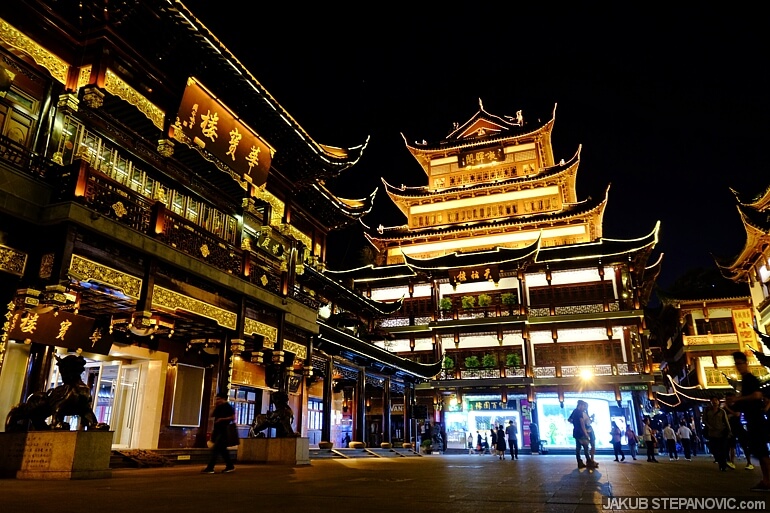