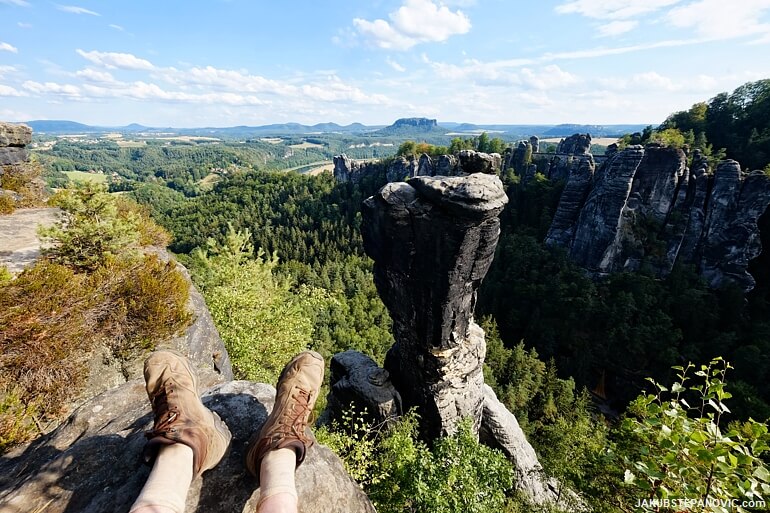 A day-trip into the national park within the German portion of the Elbe Sandstone Mountains.

Coming from Dresden, getting here was a piece of cake, as there's a convenient connection by a train. The thing is, the railroad is on the opposite side of the river than where the most of the region's points of interest are, and there is hardly any bridge in the area. Thankfully, every village operates a ferry service, which adds a nice touch to the trip. 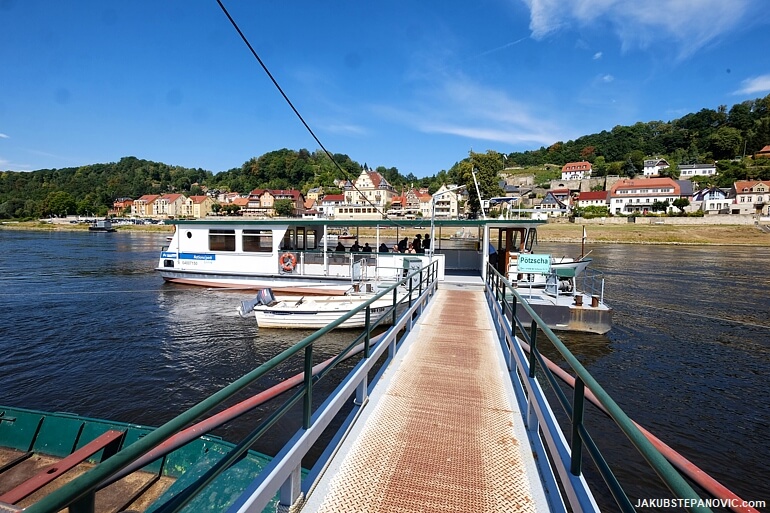 The ferry I got took me into a picturesque town of Stadt Wehlen.. 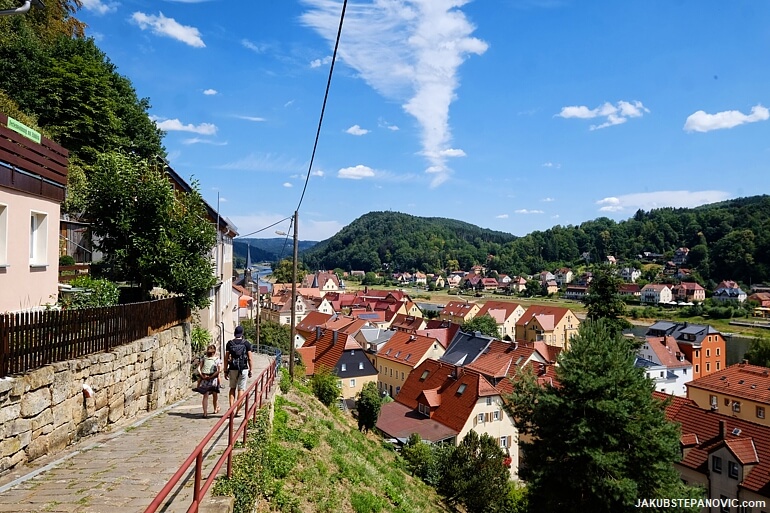 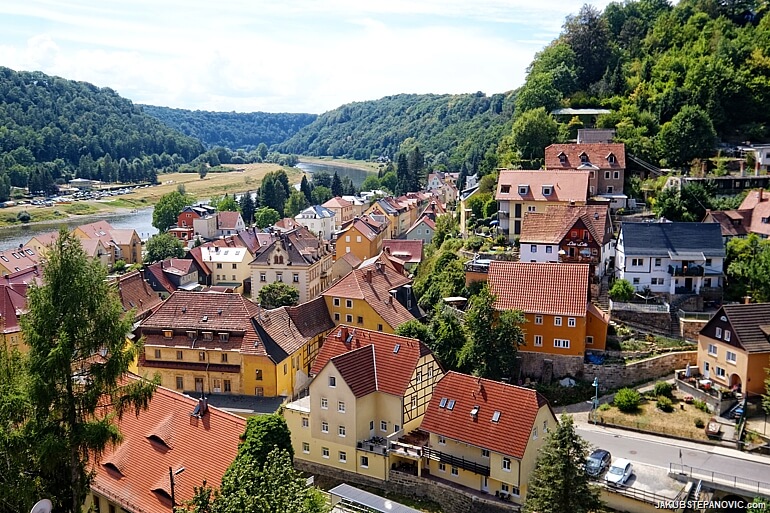 ..where is a Schützenhaus, a hostel with a beer garden, and most importantly the summer residence of Lancaster-based painter Christopher Haley Simpson, so you can see numerous cool artworks all over. We had a chat about art, cultures, and the world in general, and it was grand.

Then I planned to see the Bastei rock formation. It could be reached within a short walk; but I opted to take a diversion through the local maze of canyons instead, to avoid the mid-day heatwave. Good choice! 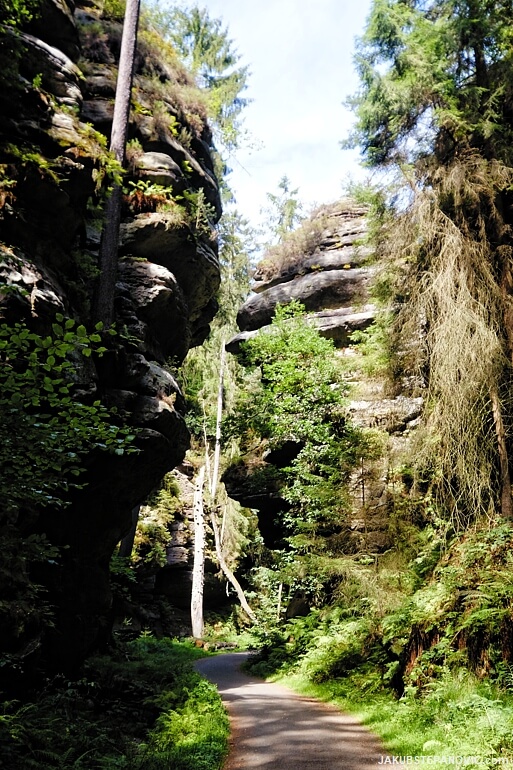 After entering a nice mixed forest with plenty of sandstone towers of various shapes and sizes, I had to stop while saying wow behind pretty much every corner. 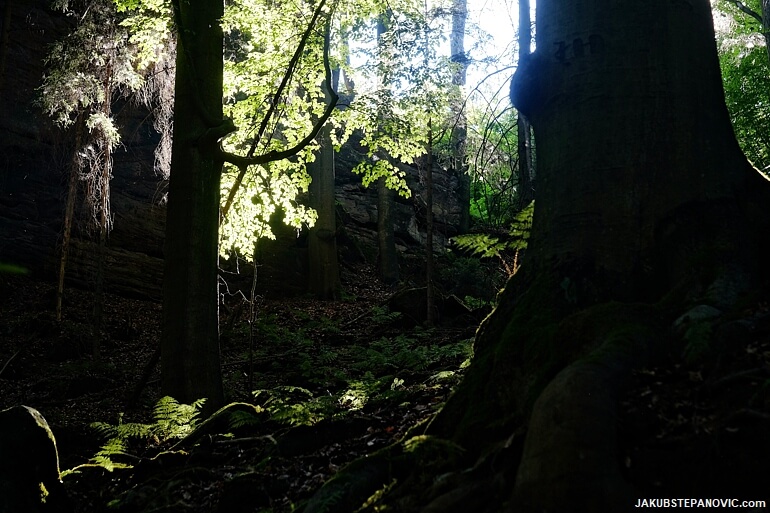 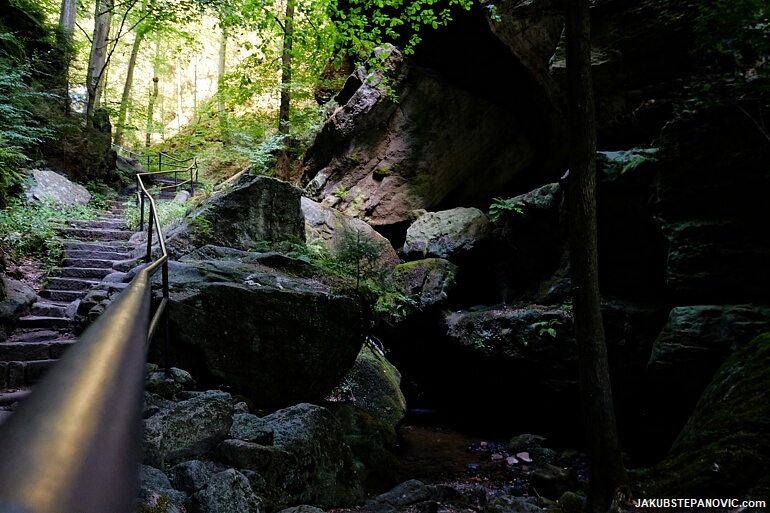 The highlight of one of the canyons I went to see supposed to be the Amsel waterfall; however, due the recent hot and dry weeks, where would usually pour gallons of water, was nothing but a few small drops now. Still, the environment around was pretty, and there's a mountain hut with a small museum of the NP. 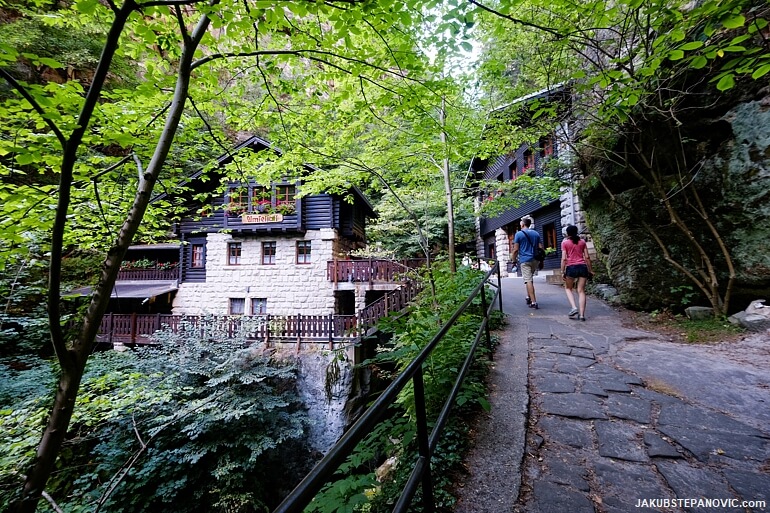 Keeping my pace through the paths, it felt great. 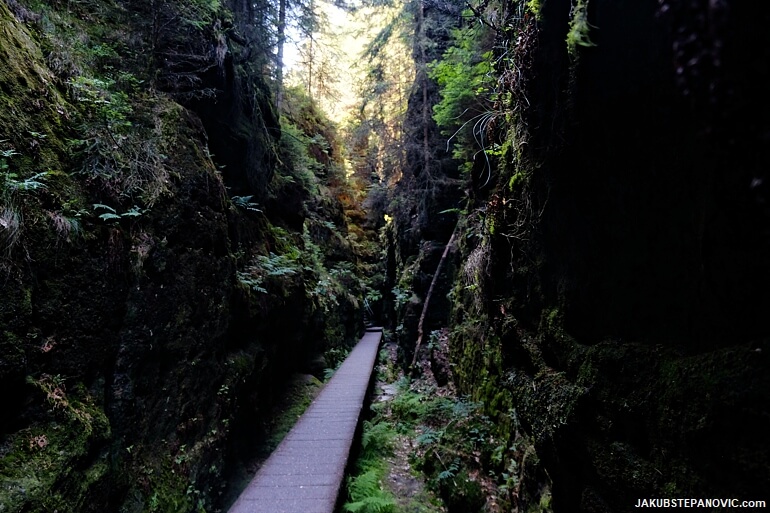 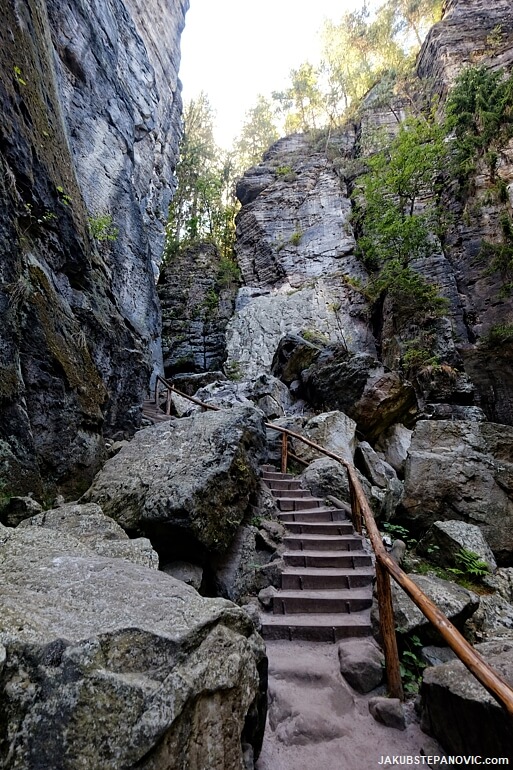 Eventually I gained some elevation, and the walls of rocks were replaced by trees. 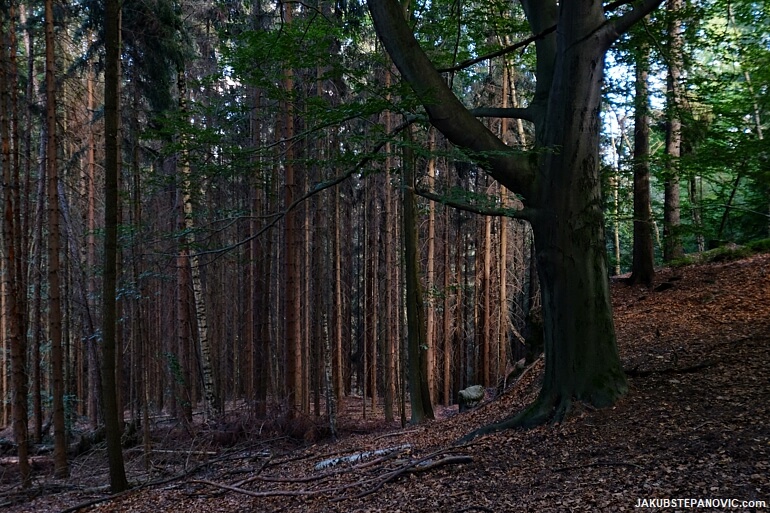 Coming out of the forest, an outlook started to open ahead of me, and I started laughing: "like a broken record..." I knew that yet another wow is coming. 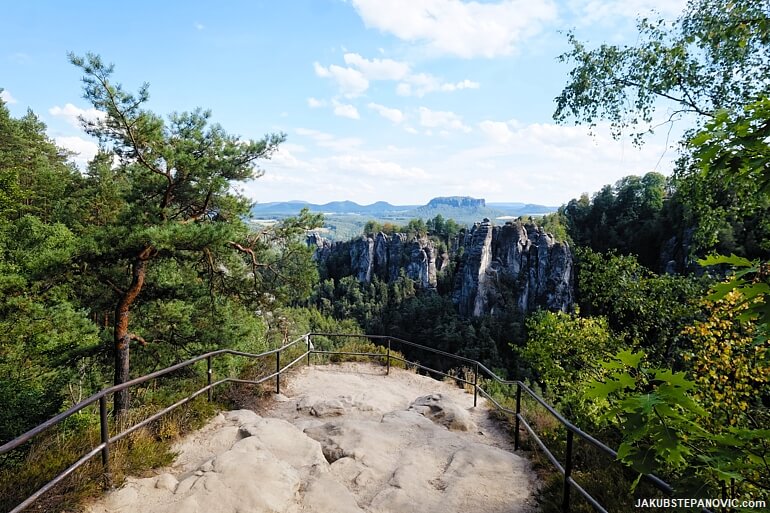 Well, the view deserved it, so what can you do.. I located a nice spot nearby and sat down for some time, to enjoy the natural beauty that encircled me. 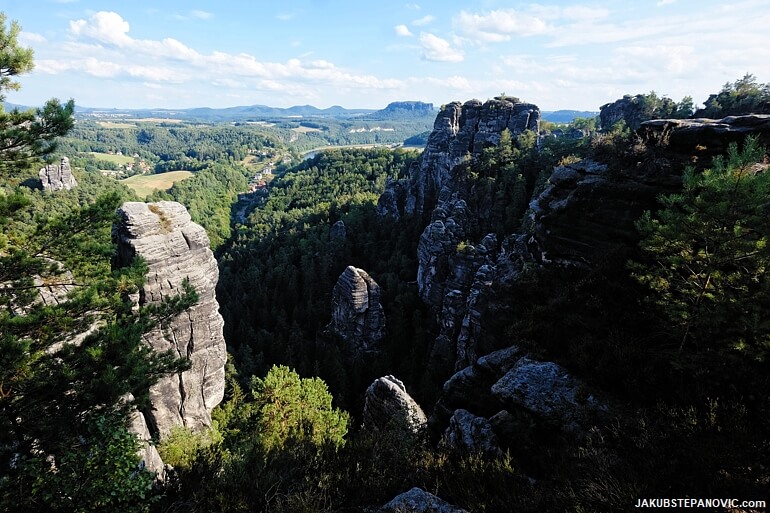 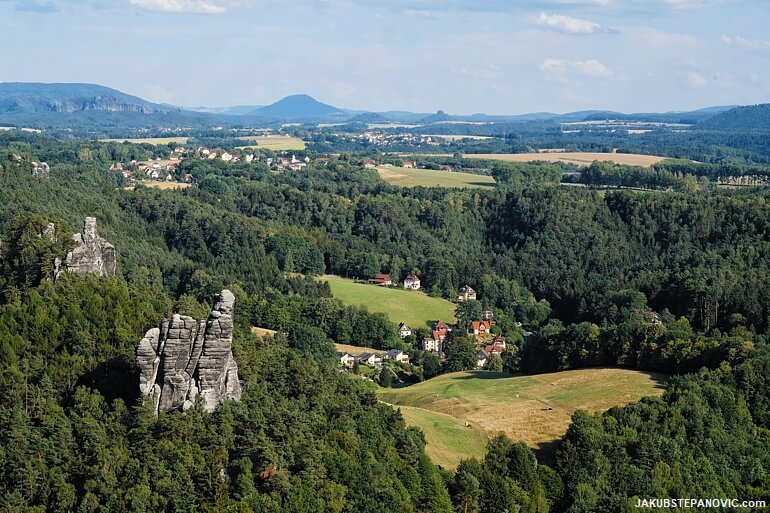 Then the famous Basteibrückecame in sight. It's a bridge from 1851, already built as a tourist attraction. 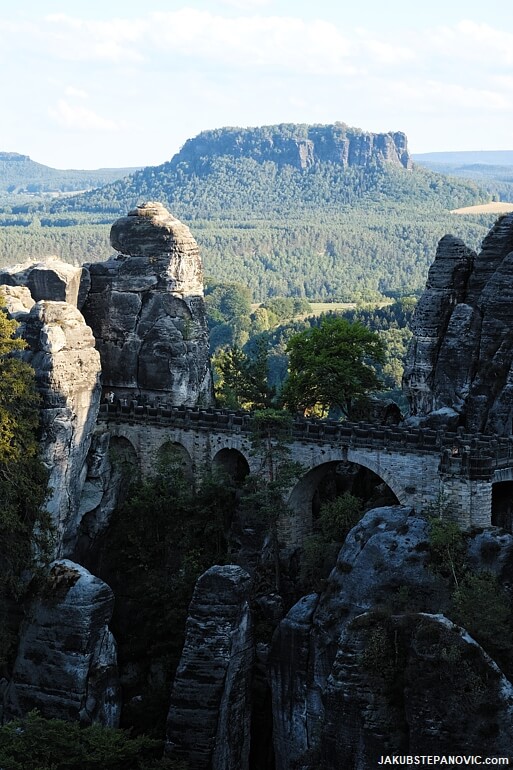 This area is easily accessible and very popular, with all the pros and cons that go with that.

Within a few steps from the bridge is an observation platform with superb views onto the river valley. 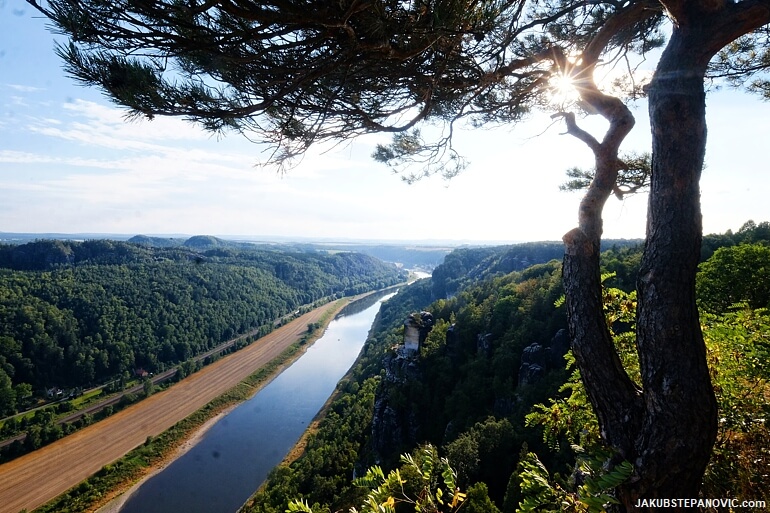 There are also medieval castle ruins - it is always cool to learn about local history hands-on, but at the same time, a glimpse over my phone revealed that there's only one ferry ride between now and the departure time of the train I wanted to take, and it is leaving soon. So I had to start my descend instead. 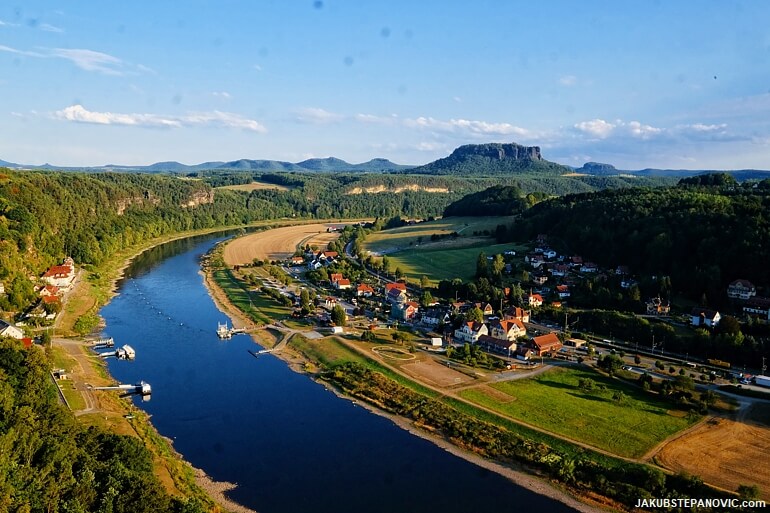 village Rathen, where I went to get the train back to Dresden.

The village under the rocks looks nice and would be worthy of spending some time there, but the ferry wasn't going to wait, so I ended running through. It was close; the ferry took off immediately after I boarded.

Once on the other shore, I followed a short stroll to the station, and I hopped on the train back towards the west. 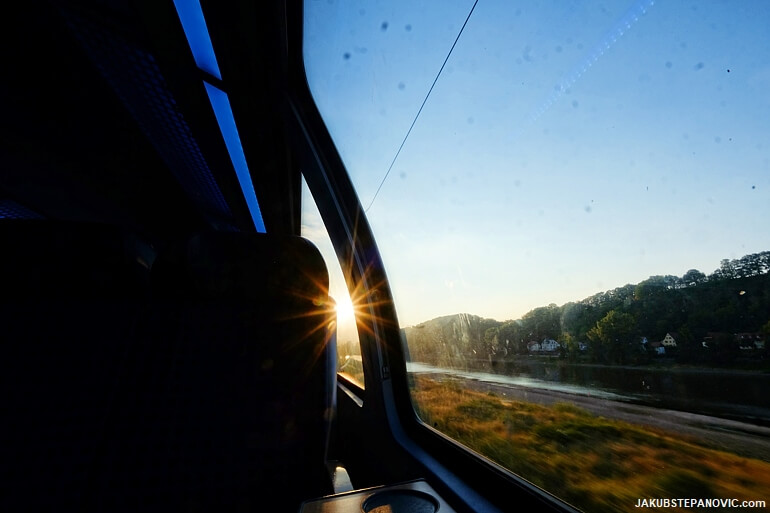 Chilling, watching the river running along, enjoying the sunset, and getting my head around all the goodness I've experienced that day.

If you liked this article, you might also enjoy other my posts about..: