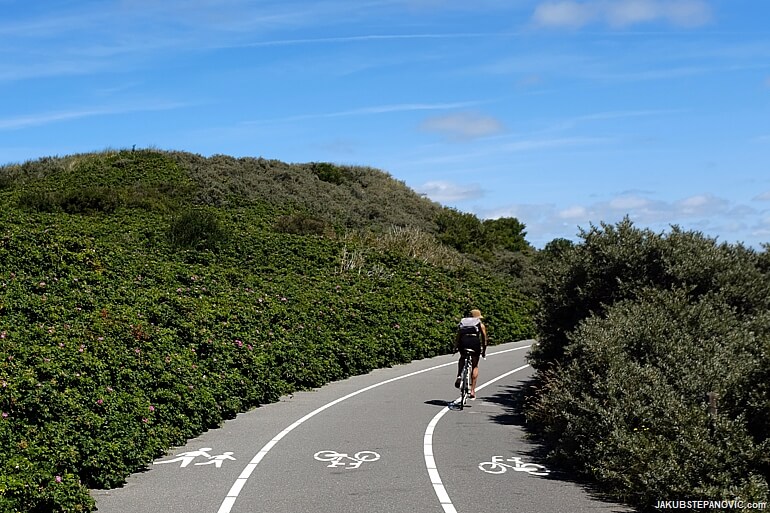 How bikes benefit non-bikers and can make life in cities much better.

Cycling is fundamentally moving between places, so it is natural to consider using a bike to commute or run errands. However, in many cities, it is inconvenient, unpleasant, and potentially dangerous. But what if it wasn't that way? I thought it would be cool for people who like to cycle, but after visiting places where a developed cycling infrastructure works well, I learned that it is remarkably useful for everyone.

Many cities around the world implemented a decent cycling infrastructure, but nowhere I experienced such country-wide, methodological approach as in the Netherlands. There, cycling is as common and casual as driving in the US. Like some Americans value their cars, a bike might be the most prized possession for some Dutch folks. But other Dutch people don't even consider themselves someone who is into sports, yet they cycle every day. 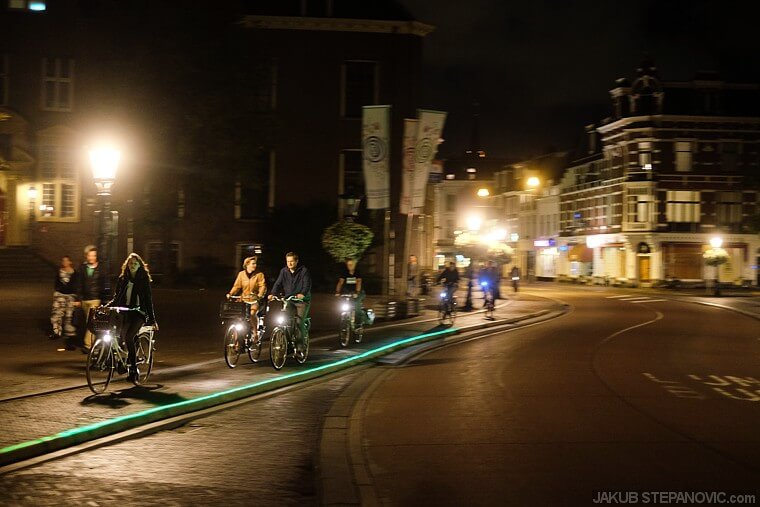 Many believe that cycling in the Netherlands works only because it is a flat country. But that's a misconception. The US is, for example, a wealthy country with plenty of flat cities, some of which have more optimal year-round weather than the Netherlands. The US is also home to many bike enthusiasts, yet hardly anybody cycles to commute or run errands. So what's the difference? The US cities actively discourage cycling, whereas the Dutch ones encourage it. The latter approach has tons of benefits, and that's what this post is about.

First, let's look at what I mean by cities discouraging people from cycling. If there are bike lanes in the US, they are likely tiny strips on a road shoulder with no protection, so I've seen drivers pulling into them as if they were breakdown lanes. Then, cyclists must join the heavy and often speeding traffic to continue their journey. And it gets only worse when you get to an intersection: 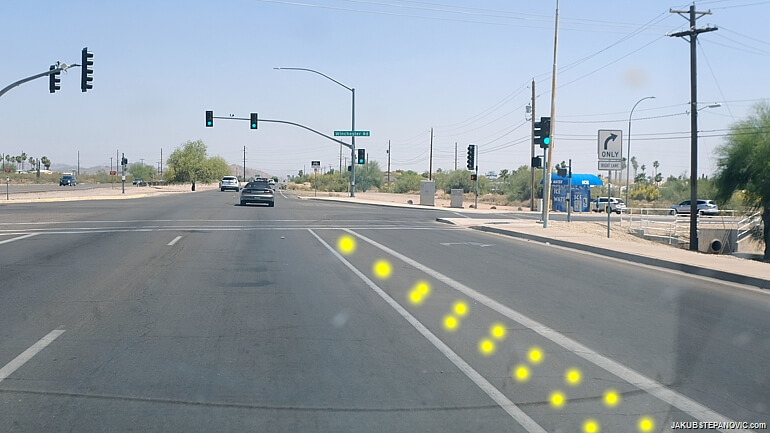 The bike lane is highlighted by yellow dots.

The bike lane is between the straight and turning lanes, so cars regularly cross it. I consider myself a keen biker, but there's no chance I'd voluntarily use these bike lanes. Unsurprisingly, anyone who isn't into bikes will never cycle here. Those who really want to go by bike use sidewalks instead, where they clash with pedestrians and create another problem instead of solving the first one.

Then, I can imagine, when the city discusses a budget for bike lanes at the next council meeting, residents voice that "Nobody uses them, it's a waste of tax money!" and they scrap any future bike-friendly developments. But I can guarantee that if the Netherlands designed their bike network utterly awful like this, nobody would use it either. See, cycling popularity isn't about terrain or bike enthusiasts. It is all about having an environment that works.

So, what does the Netherlands do differently to make people who couldn't care less about bikes cycle to get around? Let's look at a Dutch road that shares a surface with bike lanes: 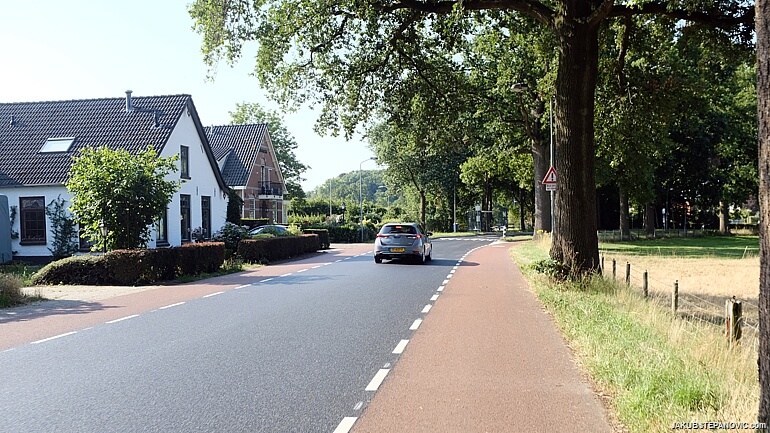 In Dutch cities, adequately wide bike lanes are easily recognizable from the rest of the road.

Note the proportions: bikes get nearly equal estate as cars. Yes, this is a minor road carrying less traffic than the example from the US, but it is because you will never find such unprotected lanes on busier or faster roads. There, cyclists get dedicated paths like these: 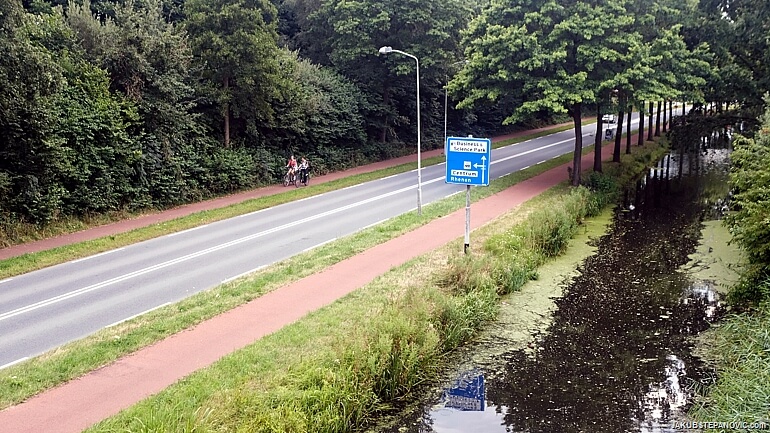 This road has fewer car lanes as opposed to the highway-like avenue in the US example, but it is roughly the same regarding the number of people it can carry. Because so many people in the Netherlands cycle instead of using a car, a bike path eradicates the need to have an extra lane for vehicles.

It can be hard to imagine that bikes could replace cars in some cities. But, even in car-centric areas, plenty of car journeys cover just a few miles, so it's not the distance that would be the issue. Nor is the payload capacity. I've seen a wide variety of options and styles of storage solutions on bikes in the Netherlands. Most have a rear rack that's well-suited for standard shopping, and some accommodate bulkier and heavier loads through trailers or specialized cargo designs. 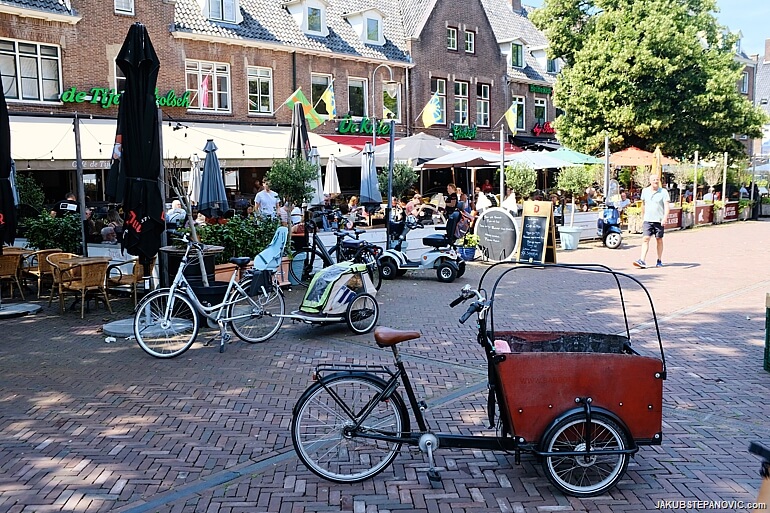 Lots of them were used to transport kids. Nowadays, one can buy a cargo bike intended to carry children. Such as this one: 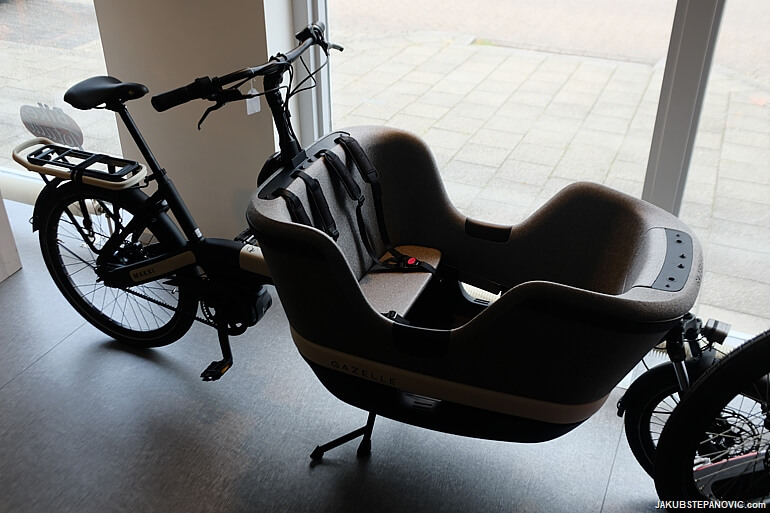 This bike has an electric engine that assists pedaling, making cycling while carrying two kids super easy, even uphill.

It isn't that bikes would replace cars in every way; they diversify the options to get places. And that's where the bike infrastructure starts to influence non-cyclists.

Some might say that they like to drive and that the bike lanes have no benefit to them. But if bikes have a segregated path, they don't block drivers. And why would you want others to cycle? Because if everyone goes around by car, the roads get inevitably congested. Even with impressive multi-lane roads, one often gets into traffic jams that are a pain to get through and take away the driving fun. Like this: 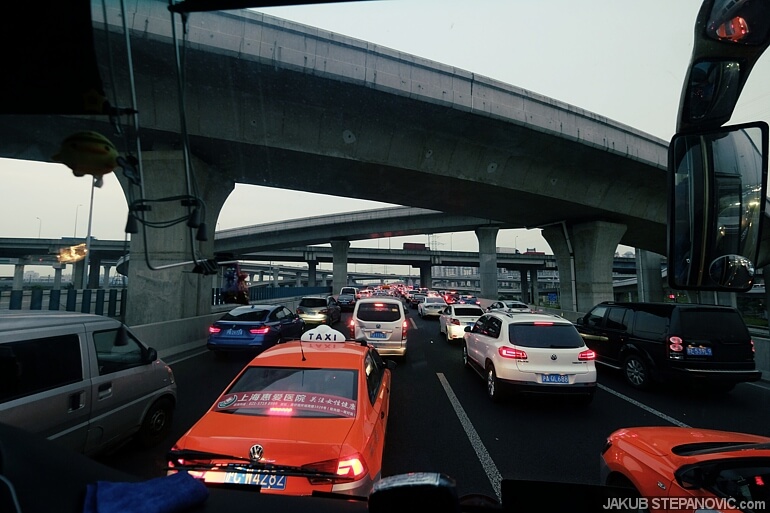 The Netherlands also has freeways, but I never experienced them jammed because people there can reach places by other means of transportation than a car. Many people just want to get from points A to B and take whichever transportation mode is convenient; so, when the alternatives are equally good or better than using a car, people use them, and the car roads are left only for those who enjoy or need them.

Speaking about Dutch freeways and cycling paths, I noted that these are hardly next to each other. It makes sense; cycling besides cars and trucks rolling at speed is just as miserable as walking next to them. Anyone who tried it knows. If there's a bike lane next to a highway in the Netherlands, it is mostly on shared bridges, where they are often separated by safety and sound barrier from the motorized traffic, making it more bearable. 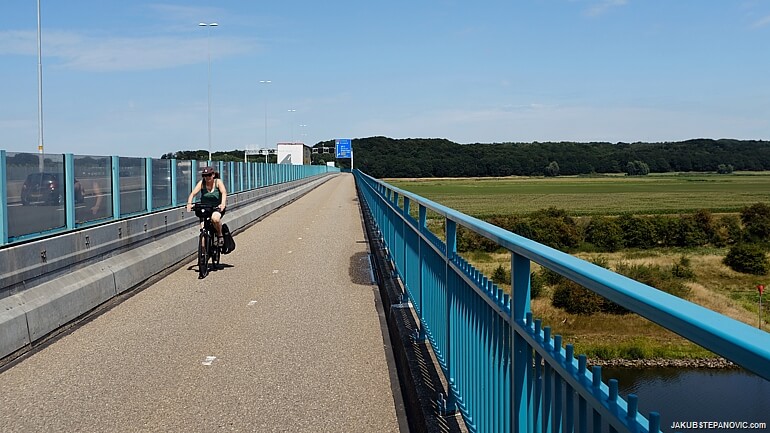 Rather than making parallel bike lanes to freeways, they built bike-friendly alternatives that go through nature instead. 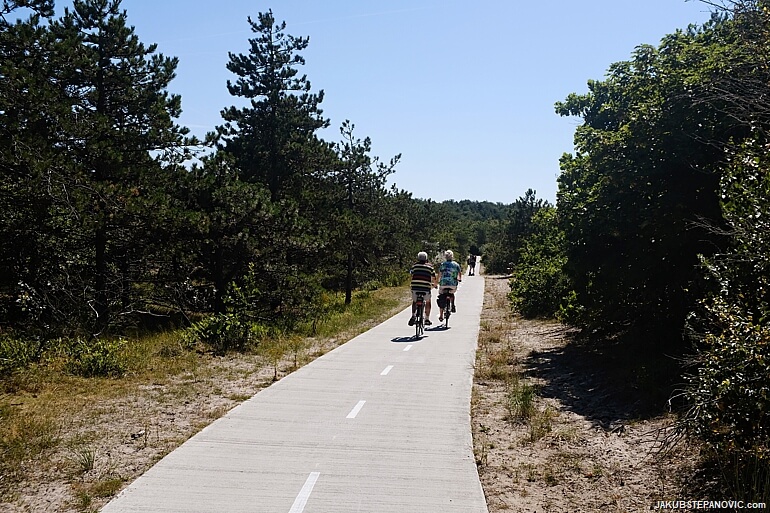 They look and work fantastic, just like the intersections do. If a bike path crosses some busier road, there are likely dedicated traffic lights, like these: 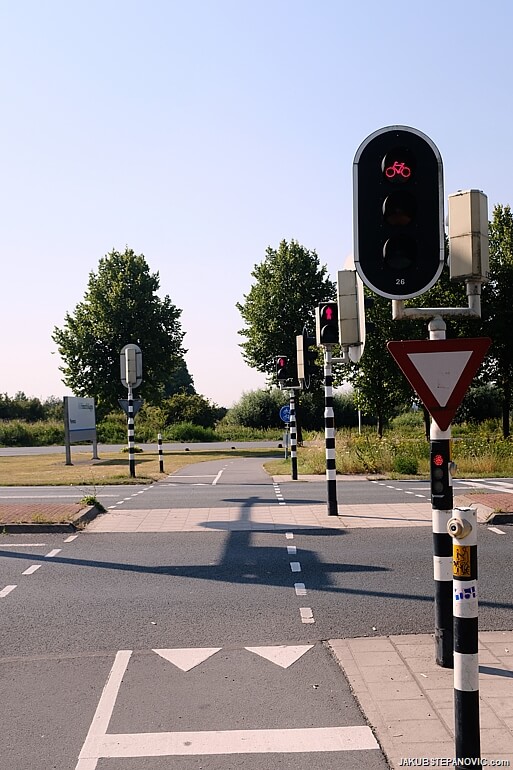 You can see a button on the pole in front of the lights: one can press it to let the system know that you are waiting. On these particular lights, I waited seven seconds for the green light after I pressed it. Yet, at many recently constructed crossroads, I got the green before I managed to press the button, because they have efficient sensors monitoring traffic.

But in most instances, a person on a bike doesn't even need to slow down. Highways and other major routes are bypassed by a tunnel or a bridge... 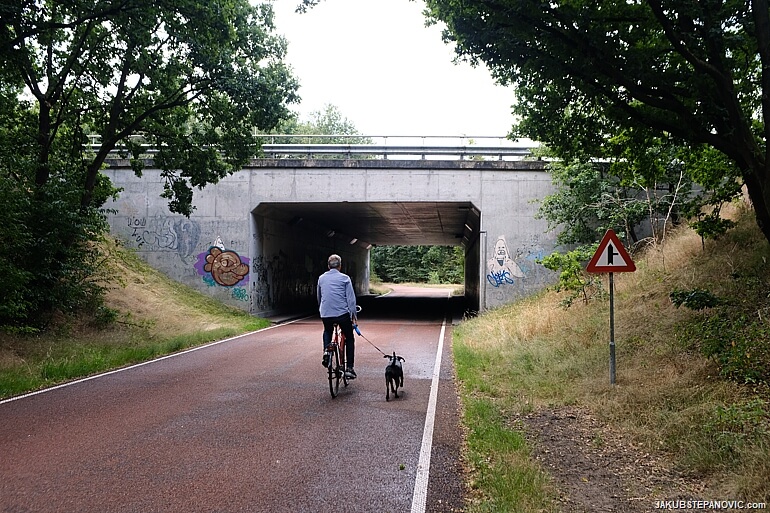 ..And on many other intersections, bike lanes have the right of way. It might be hard to visualize in car-focused countries where drivers don't respect cyclists, but here, bikes are considered full-fledged traffic participants, like cars, trucks, buses, etc. 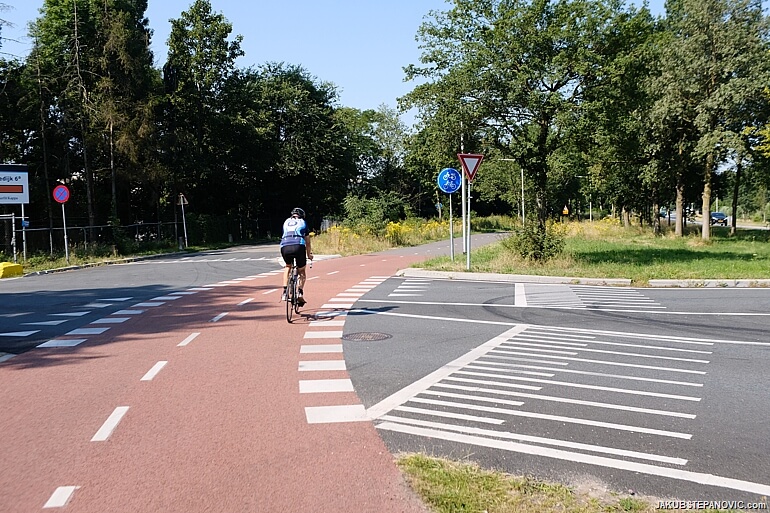 On this, and many other Dutch intersections, the motorized traffic has to stop if they see a biker coming.

These measures motivate more people to take on cycling because the Dutch cycling system is also very safe, besides being convenient. It is common to see older people, as well as children, cycling here. 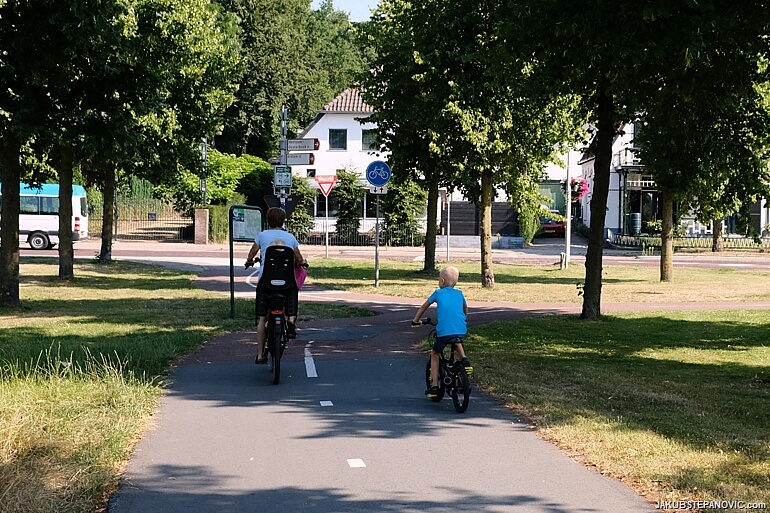 Can you imagine bringing a kid on a bike to that US intersection pictured at the beginning of this post? I sure wouldn't want to. In the Netherlands, kids learn to cycle at a young age, and since the infrastructure is so safe, it is not rare to see kids around ten on their own. As a result, they are likely to become self-sufficient sooner than in car-dependent countries, where somebody has to drive most children until they can get their license and a car.

Another aspect that impacts independence is budget; also an area where bikes help both their users and the cities. Purchasing, running, and maintenance expenses associated with a bike are generally much cheaper than those with a car, and building and upkeeping infrastructure is the same story. Bicycles have smaller footprints than cars, so their lanes can be much narrower while keeping the throughput, and they need less repair because bikes are lighter than other common vehicles.

Where the smaller size of bikes really makes a difference is when it comes to parking. Look at this underground parking garage for bikes; these aren't rare in the Netherlands. 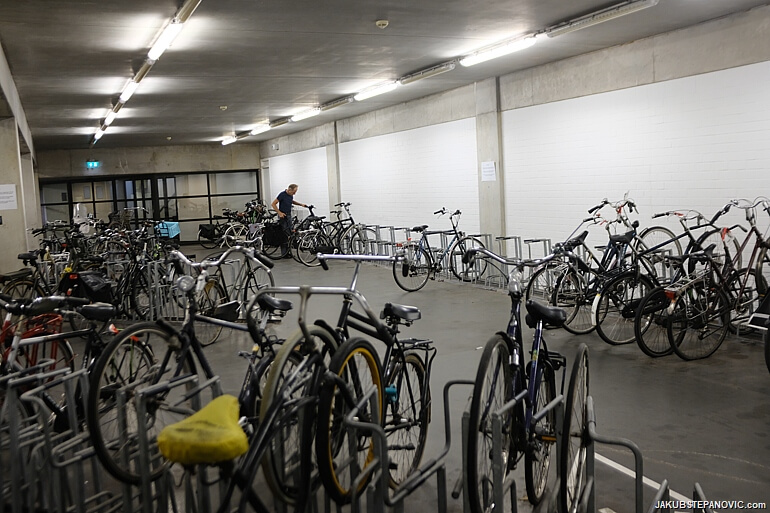 The area in the picture could take roughly 100 bikes, but it would fit maybe ten cars. Even if every car was filled up to its capacity, which often isn't the case, it would require a much bigger space to serve the same number of people. Not only is bike parking more cost-and-space efficient to construct, but it also cuts the distance between where you park and your destination. Many drivers spend time looking for a parking spot close to the entrance of wherever they go. With bikes, even if you arrive after 50 other others, you walk only the distance as you'd arrive within the first five cars.

Furthermore, a parking lot isn't the most exciting point of interest; using some of the most valuable downtown plots of land for it is pretty wasteful. Why would you want that? 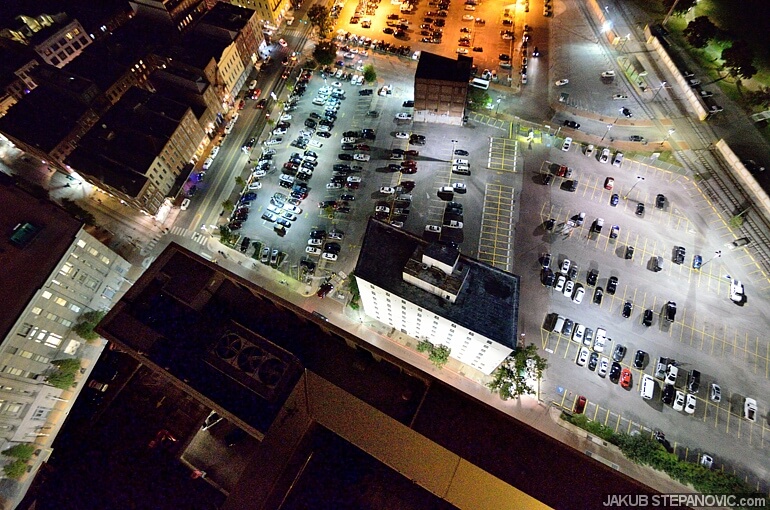 Cities with fewer cars can be more compact – so everything is closer, and one doesn't need to spend ages getting places. Then, the cities can use the saved cash and space to plant some greenery and make them more pleasant for everyone. 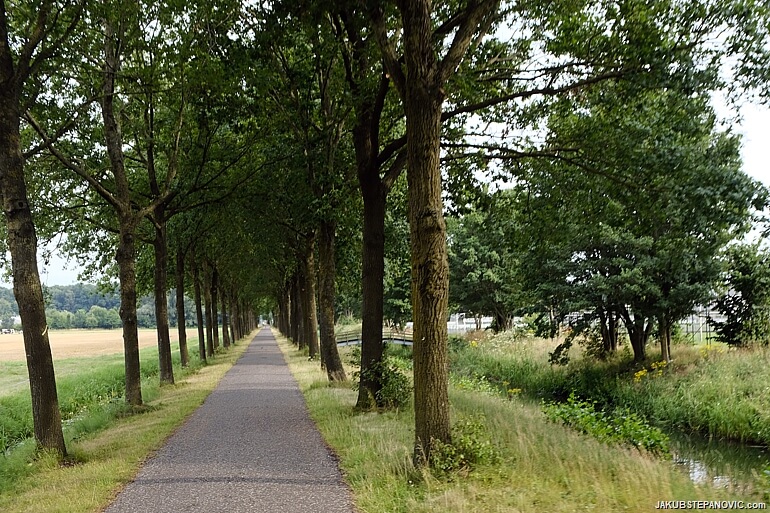 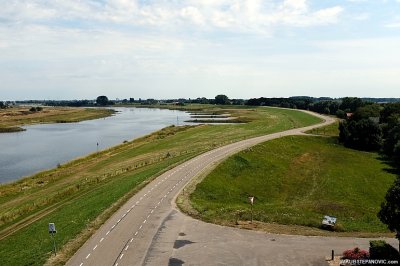 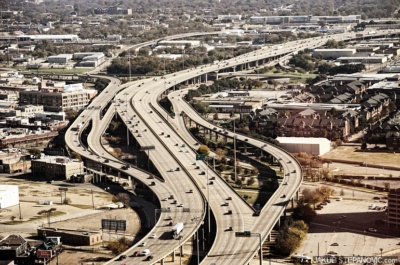 Finally, like bikes help places look nicer, it works for people, too. You can find arrays of scientific studies highlighting the health benefits of cycling over driving; in practice, commuting in the Netherlands often feels like visiting some model casting instead of a chore. Together with the arguments above, why wouldn't you want that?

You can get in touch with comments or browse my Blog Archives for more posts.