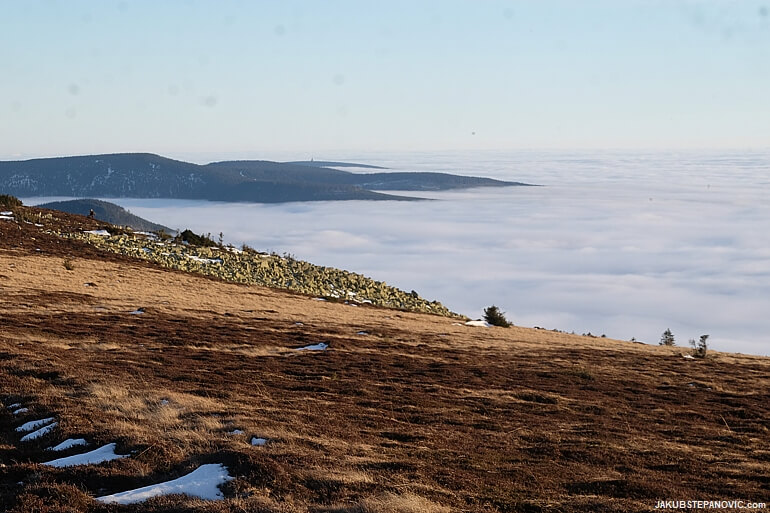 Up In The Sky

Climbing above the clouds to experience scenes out of this world.

This year's winter solstice brought rare conjunction of Jupiter and Saturn, which was a fantastic excuse for a hike in Czechia's highest range, the Giant Mountains. The recent days were rather cloudy, so if there was a place to see it, the high plateau was it. Still, I didn't set my expectations too high for some starry sky, but since being in the mountains is excellent regardless, it felt like one can't go wrong with the decision.

No matter the sky's situation, I thought that the trip would be full of interesting visuals. And so, I dug through my storage to find a box with my old photo equipment that I used while doing photojournalism for a living, to resurrect my big camera and some lenses.

About three years ago, I replaced it with a compact camera with a fixed lens (that means that there's just one angle of view, no zoom. The only way to get closer [or further] from action is to use your legs). It is fine for many situations, and it is much more portable and lighter than the big professional cameras — a big plus for me. However, the compact camera takes away the creativity to frame the scene, possible with dedicated wide and long lenses. Recently, I started missing that. "This trip is surely worth lugging the extra kilos to capture some cool stuff," I was thinking. I charged the batteries for the big camera and switched it on to see if it works. It looked all right. I set up the time and chucked it into my backpack with two lenses. "Here we come for the excitement!"

The foot of the range was thoroughly submerged in clouds, but the path up was very pretty. 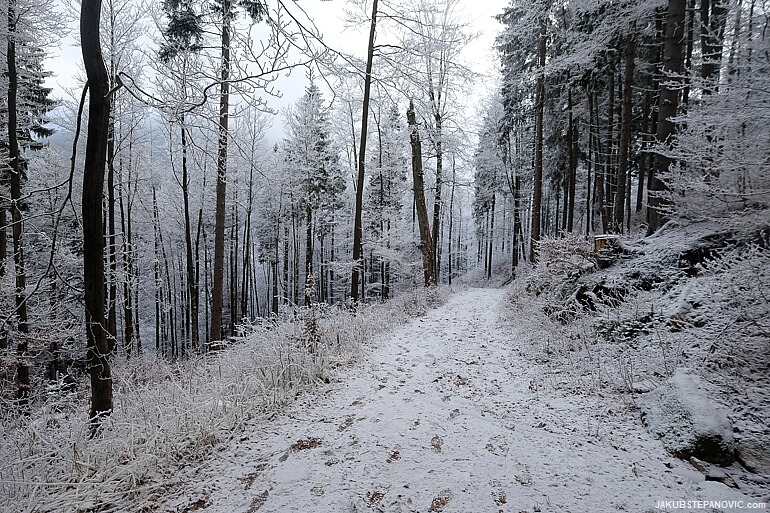 The aperture and optical stabilization on the wide-angle lens didn't work, but no worries — it was usable, the wintery conditions were neat, and the overcast sky occasionally teased with blue colour. The blue shone through the clouds more often with the rising elevation, providing enough motivation to keep climbing without stopping. Sure enough, just below the tree line, the clouds ended too. Yey! Let's swap to the long lens! 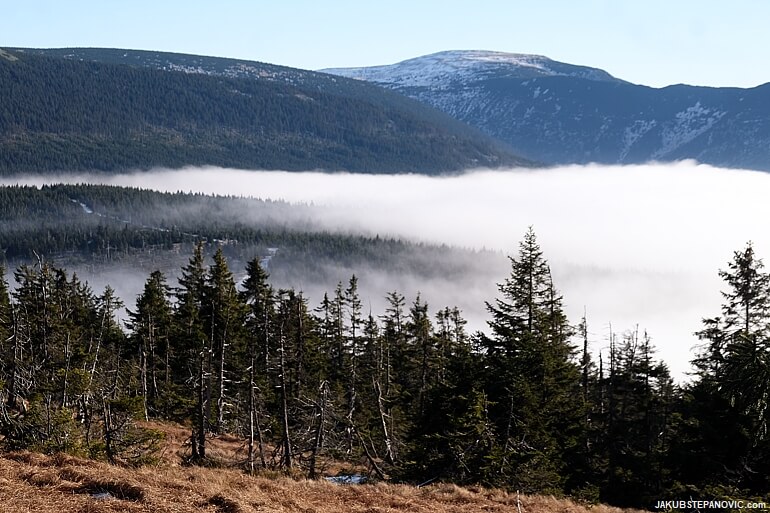 As I looked through the camera's viewfinder, I noticed that the image was oddly soft. It was then when a hazed memory started to appear that the reason why I put the camera stuff into storage was something besides the bulk of it. The long lens was broken too. It could not focus on infinity, and everything past some 15 metres was blurred. "So, the heavy barrel of metal and glass that I carried over the distance of nearly a kilometre vertically is only an overly expensive paperweight?" I sighed, but I wasn't keen to give up just yet. When I closed down the aperture to increase the depth of focus and used the lens only on the wider end, the image was a tad better. Well, nevermind. I accepted that I wouldn't be able to make prints out of this trip and rolled with it. The scenery around was too good to be any upset. 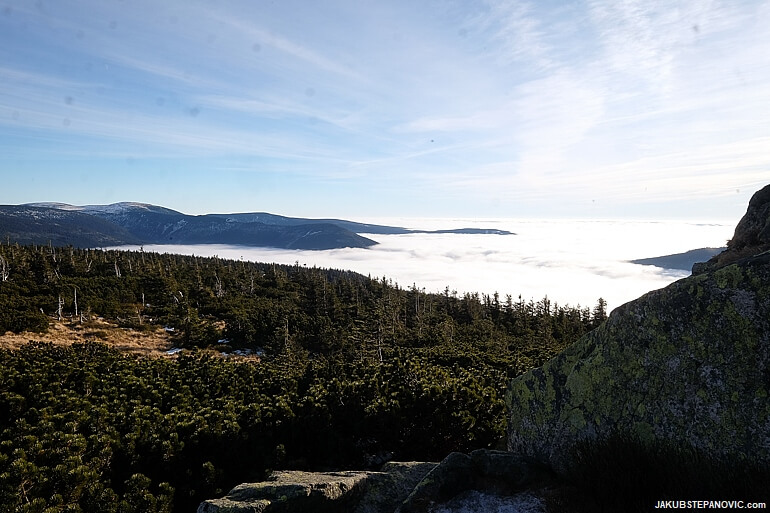 Besides the outlooks, the ridge features several beautiful granite formations, so there's always something to admire. 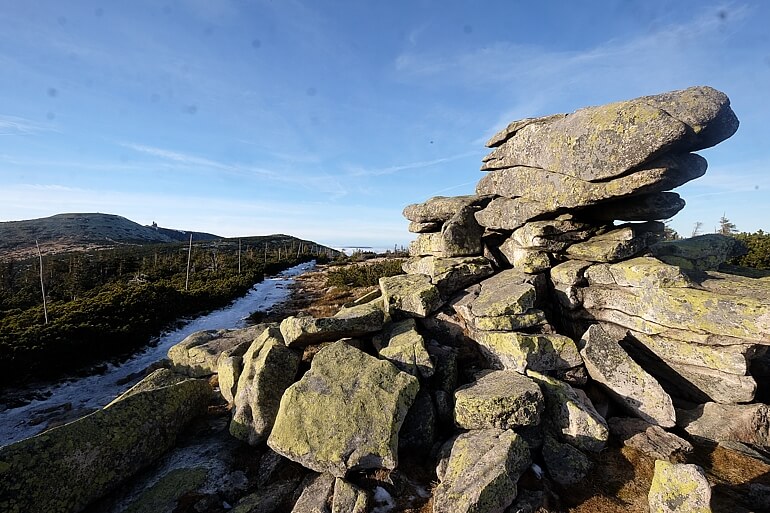 One of them served as a picnic spot. 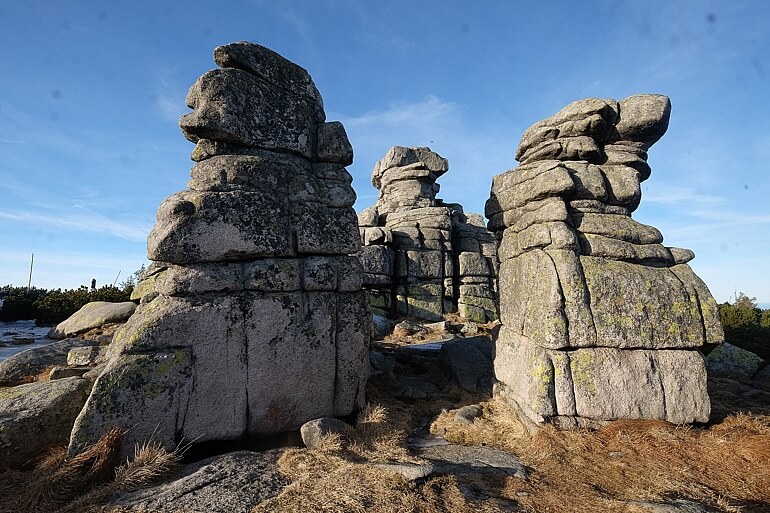 The clouds were coming from the south, stopped by the ridge, and left the north clear-ish. 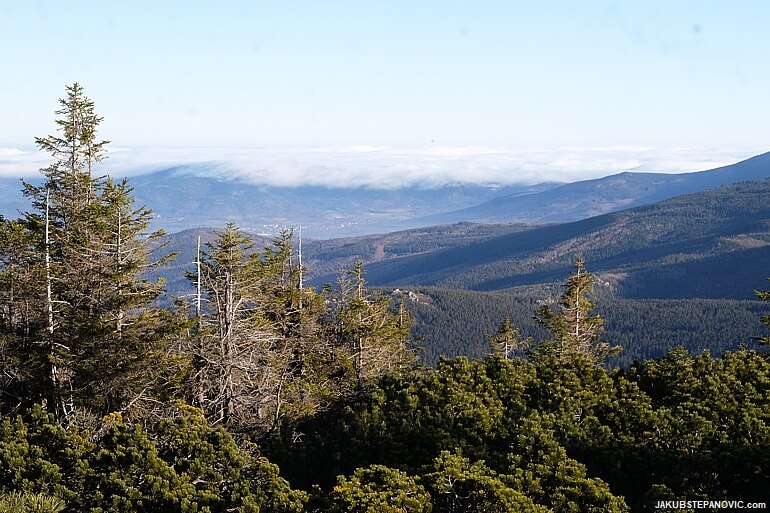 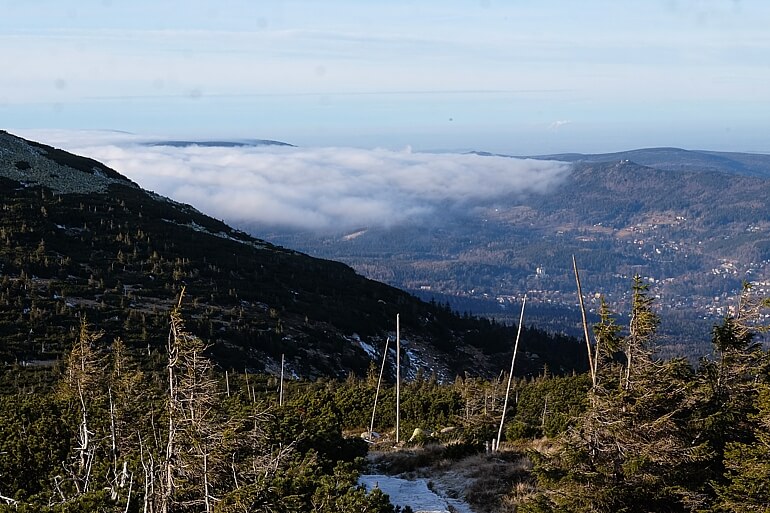 As it is during the shortest days of the year, the sun started setting quite soon, casting long shadows and soft, warm light. 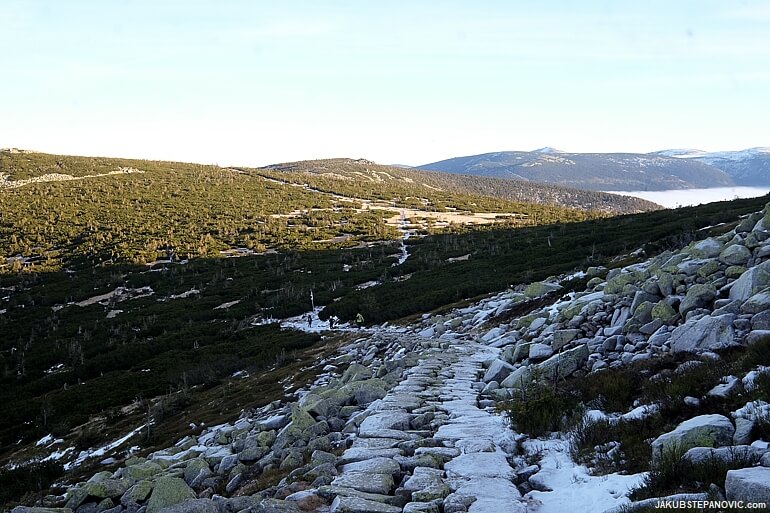 While planning the hike, it wasn't clear whether the sky will be clear or not, and so adding some points of interest on the ground was desirable back up. One of them was the Śnieżne Kotły, a large cirque with a few observation platforms. 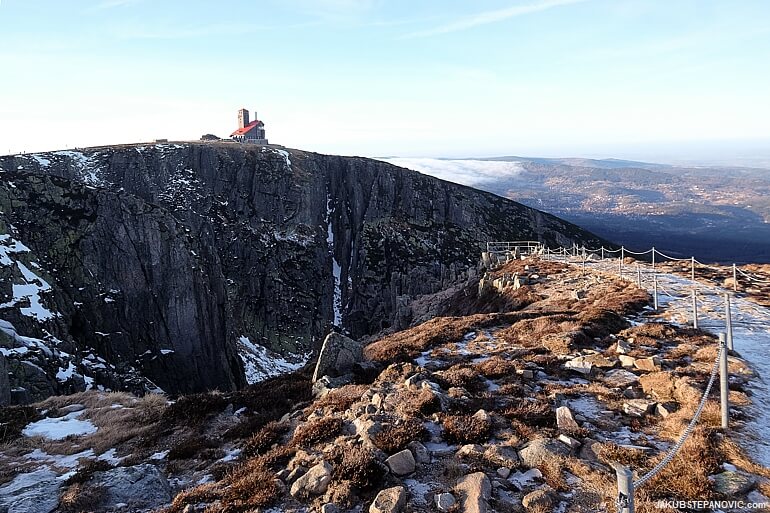 But since the sky cooperated, the visibility was stunning, and the place kept on delivering. 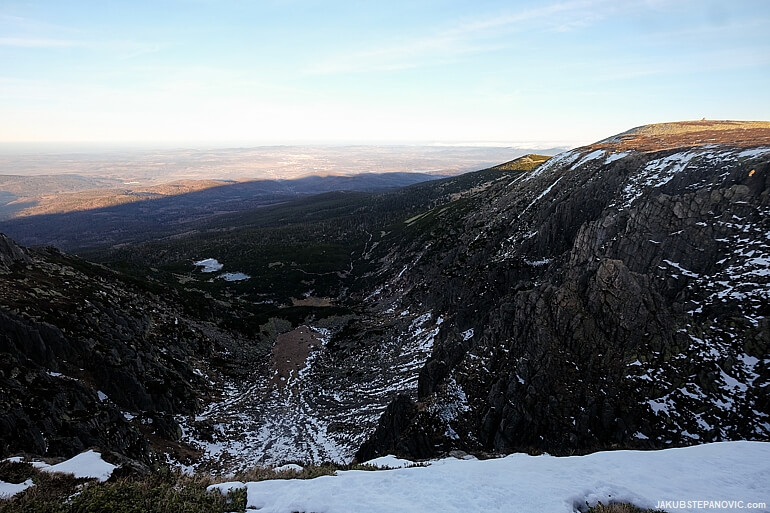 At this point, the sun was nearing the horizon, and the loop turned southwest, where the conjunction was meant to be. 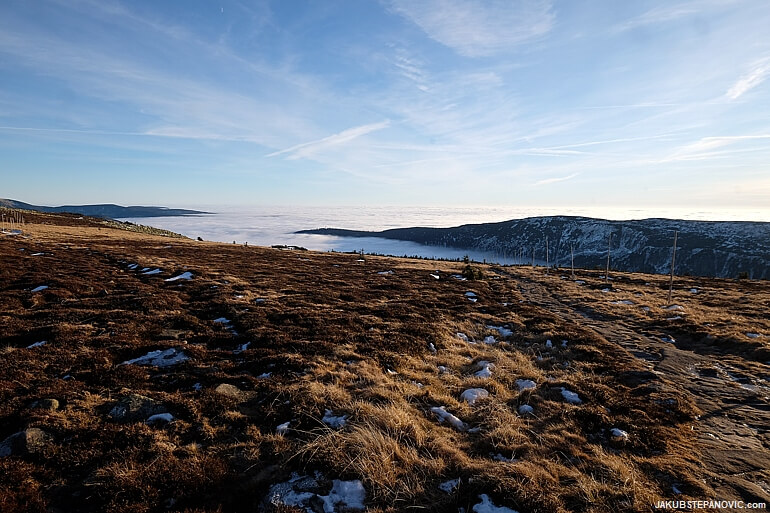 The south was still soaked in an inversion.. 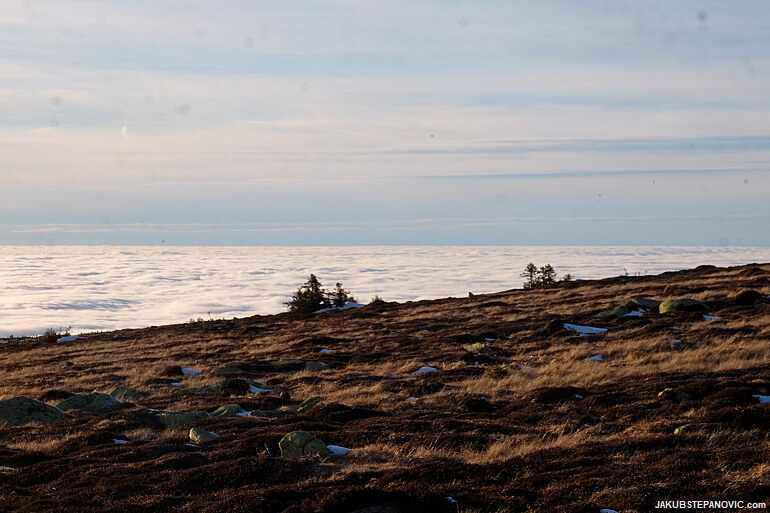 ..which, in the evening light, added an even more exotic feel to the location 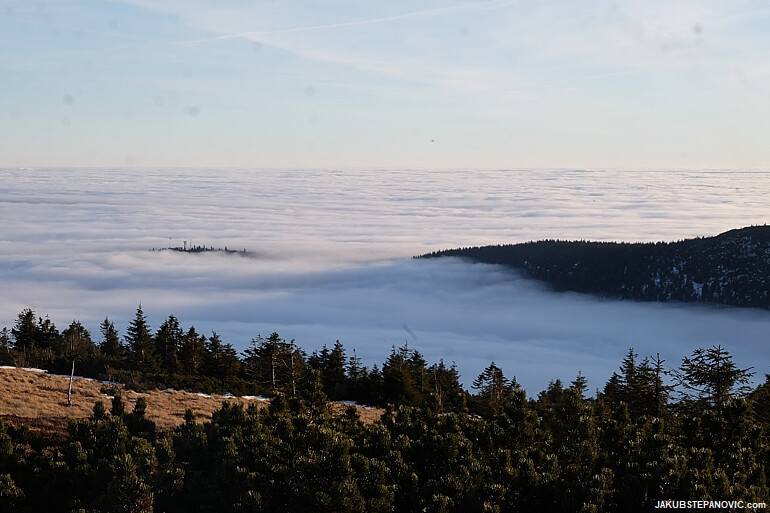 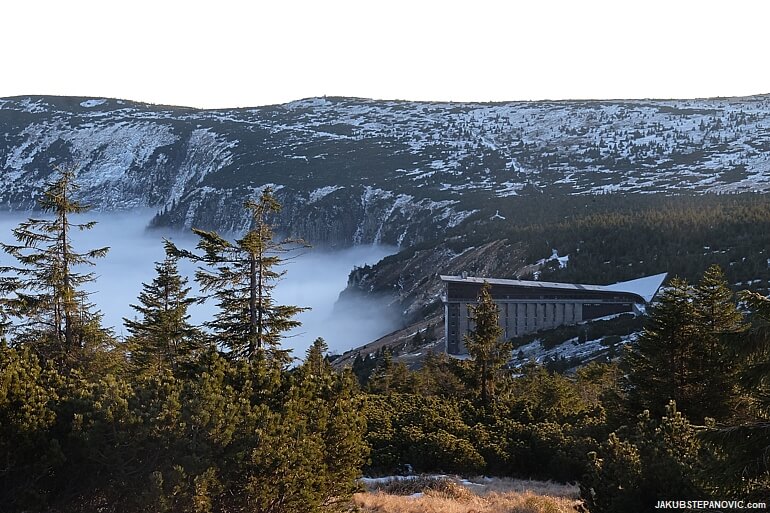 The path crosses a few rivers, which created a feel that they feed into the clouds below the ridge as if it was an ocean. 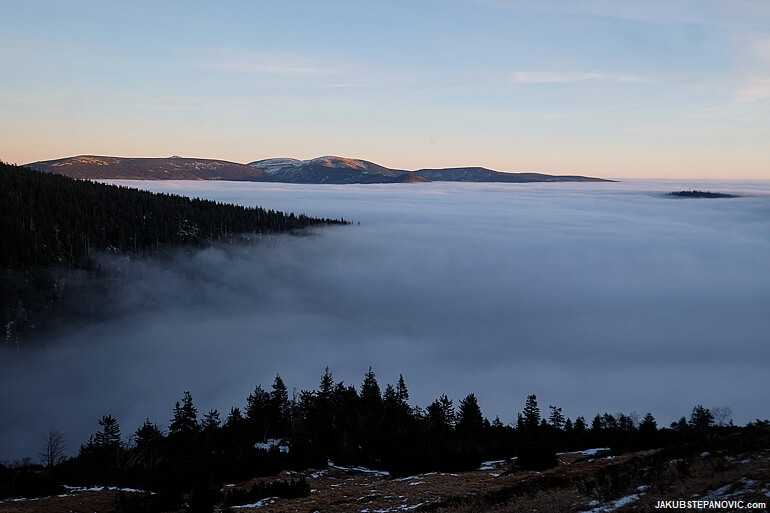 The ridge then formed the mainland, and a few mountains nearby turned into islands. 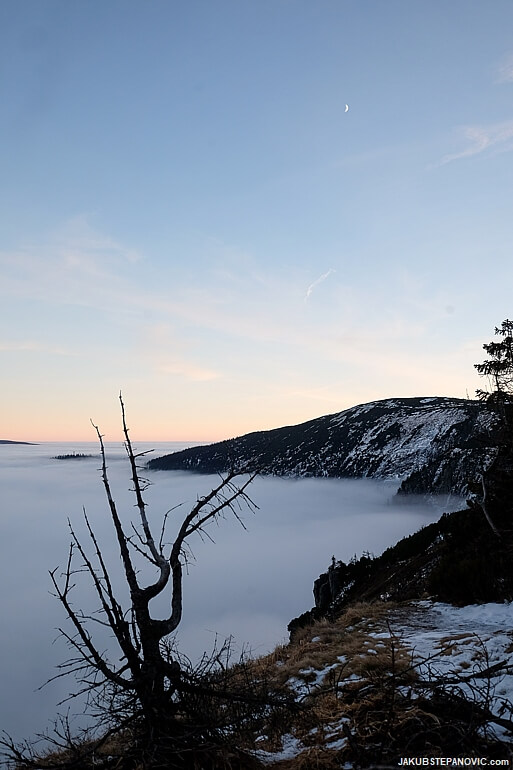 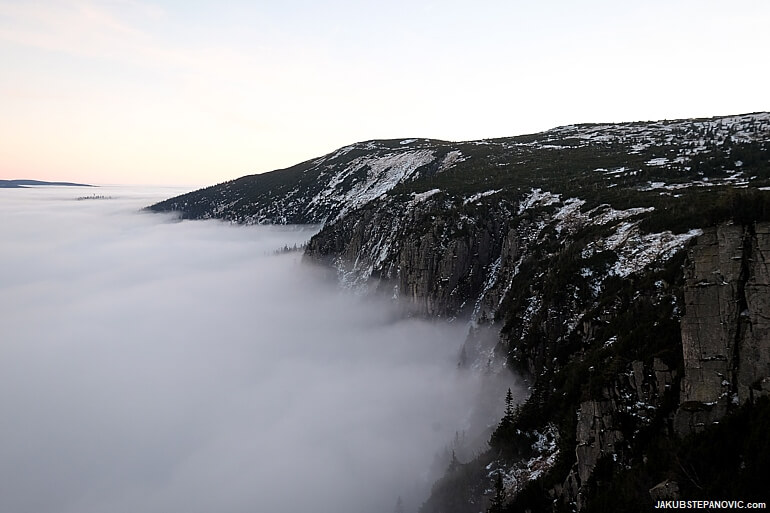 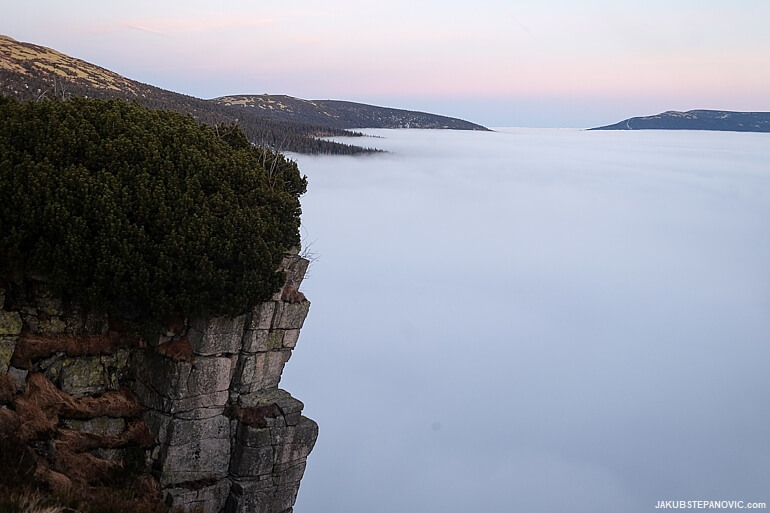 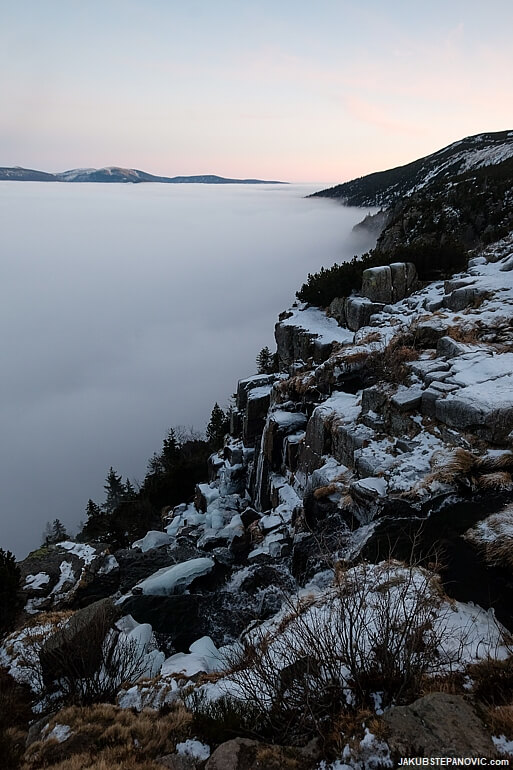 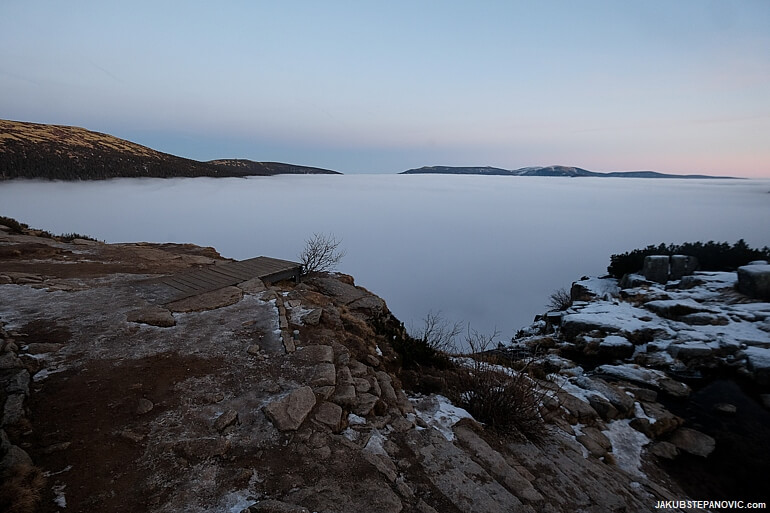 With such views, the darkness fell in no time. 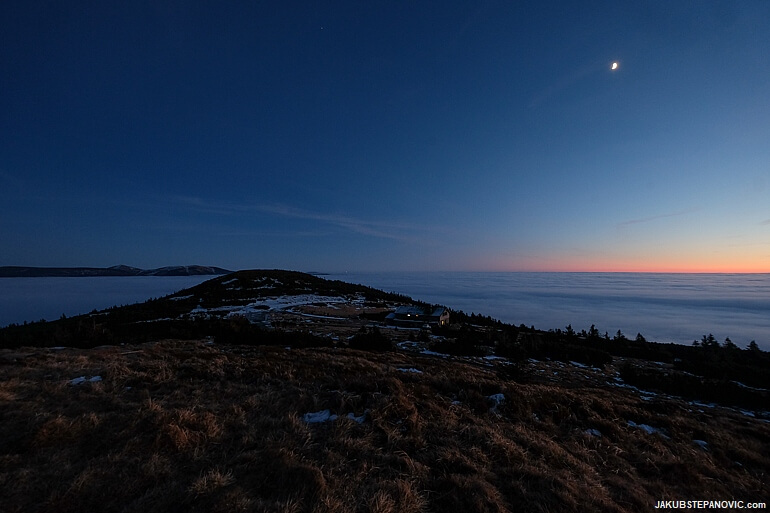 Actually, it did just in time after reaching a good viewpoint called Vrbatovo návrší, opening a theatre of the sunset tones. 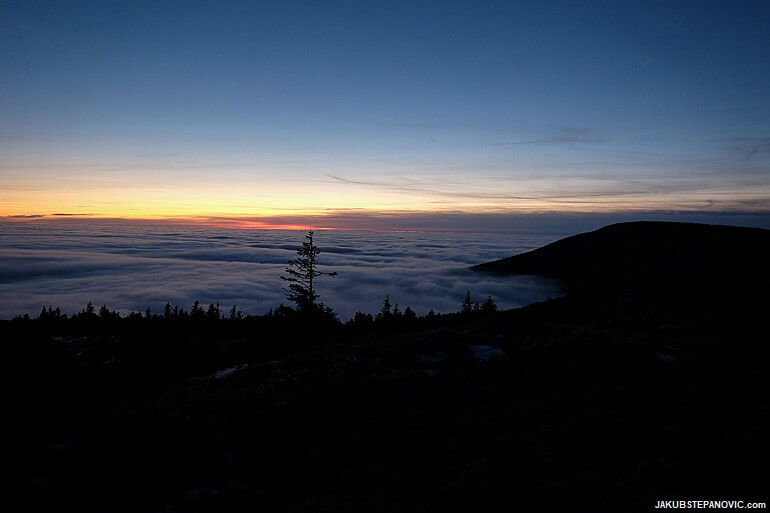 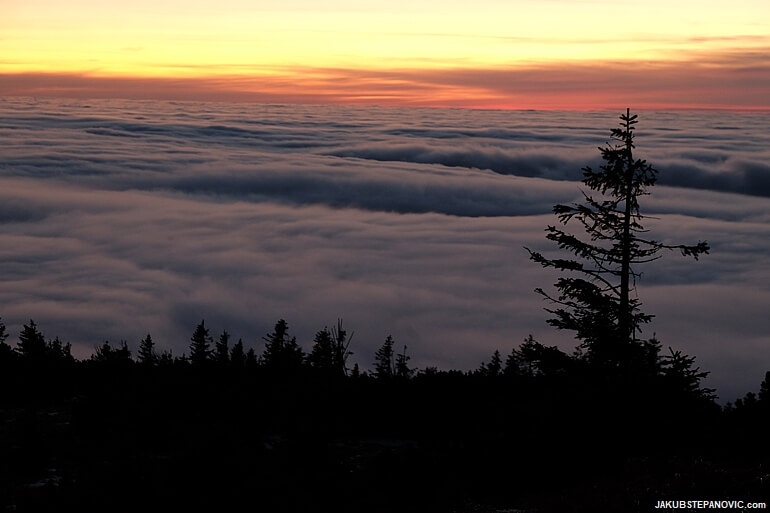 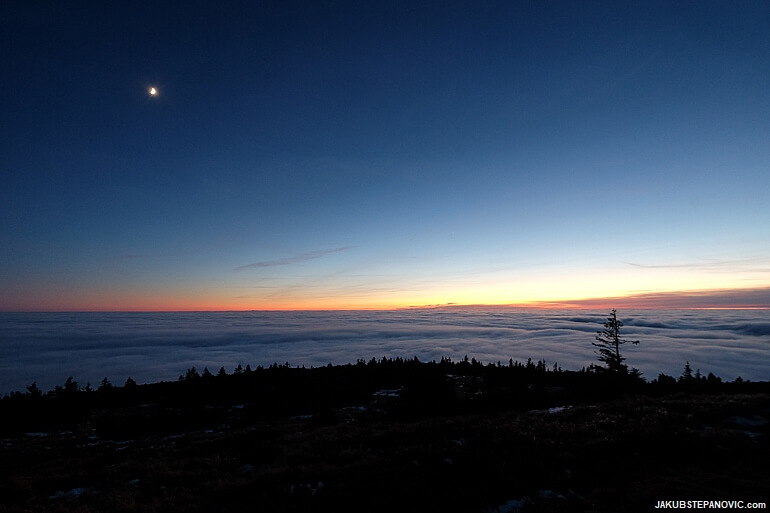 When the sunrays faded, the clouds got choppier — the sea of brought a tide of waves. Yet, the air was pretty calm, a welcomed addition when sitting motionless on a mountain ridge. 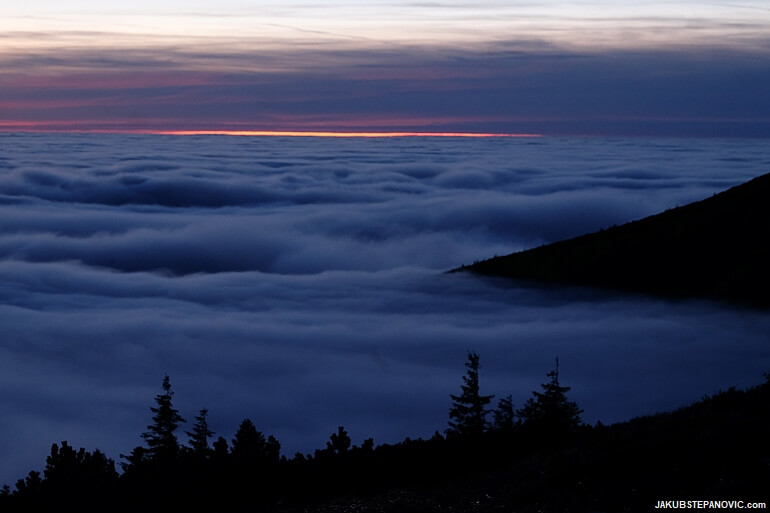 Sadly, the lack of light rendered the broken lenses useless. Thankfully, it also meant that suddenly, the moon got a company. "Is it...?" Above the horizon appeared a bright point that looked like two stars in close proximity. "It is..!" Apparently, the last time Jupiter and Saturn aligned in this way was in 1623. Moreover, astronomers also consider such conjunction to be the most probable origin of the Bethlehem Star in 7 BC. The inversion enhanced the visibility by blocking the light pollution from the cities below the mountains, and so there it was.

Just under the Vrbatovo návrší is a chalet, from which leads a paved road down from the ridge. While I brought lights with spare batteries, the convenience of the smooth way to descent was hard to turn down. And there, unexpectedly, the memorable day reached new heights: Behind a car parked on the road was a group of people, who stood above a massive tube pointing towards the conjunction. "Holy Moly, it's a telescope!" 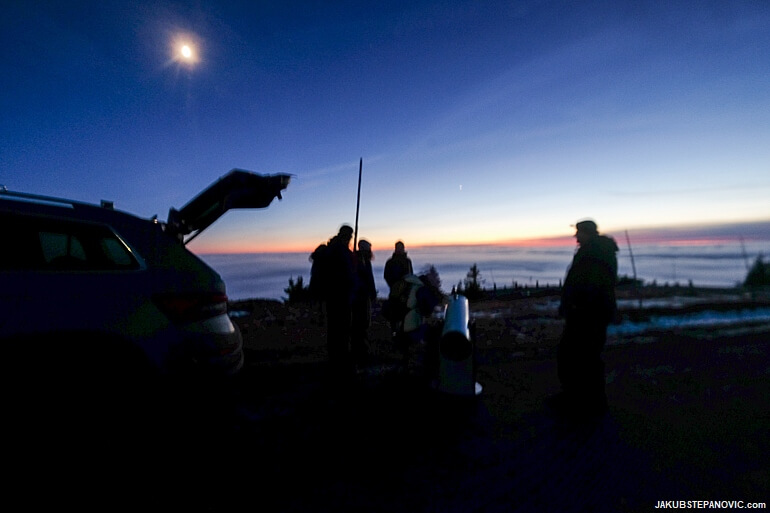 The guy who brought it up said that it provides some 250x magnification, and more importantly, allowed a look. Jupiter was around 762 million kilometres from us, Saturn about twice as far. Yet, through the telescope, I could clearly see the textures and colour stripes on the gas surface of Jupiter, and Saturn with its rings. What a view!

I never saw a planet so well; here, I had two and four moons of Jupiter as a bonus! Sure, one can view loads of ultra-clear images on the internet, but seeing the details in person was a completely different feel. There's no chance I would do it justice, so I didn't even try to capture it. I just looked up for a while, then said many thanks, and started going down.

Shortly after reaching the cloud-layer, the conjunction disappeared, and everything past ten meters begun to blur. "Almost like looking through them lenses I have," I laughed. The moon lost its brightness and got a halo of diffused light. Losing more elevation, and the moon disappeared entirely. Darkness, like the one out in the space. Exciting, a ton.