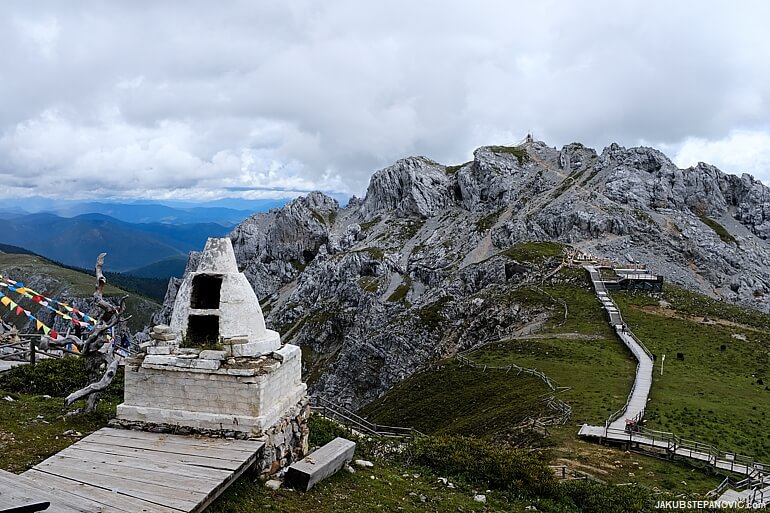 Tibet has the highest average elevation of any region in the world, which sparks curiosity about how people live there and about the extraordinary landscapes leading to the famous Himalayas. Yet, as it is on the other side of the planet from my home, I never thought about visiting it. However, that changed when I got an opportunity to go to Sichuan, a Chinese province bordering with the region. So I looked into it, only to find out that Tibet has heavily restricted access for non-Chinese passport holders. But, as the mountains from the Tibetan Plateau stretches beyond the administrative borders, I was eager to make some use of it.

Still, doing so isn't without challenges. You can't rent a car without a Chinese driving license, and public transportation is sparse in the area. Moreover, while it is possible to navigate eastern China relatively well without being any good in Chinese, it is more difficult here in the west. I was lucky, though, as a good friend of mine kindly shown me around. We met in Kunming and set off to Shangri-la.

For decades, Shangri-la existed only in fantasy. It was introduced to the world as a hidden harmonious lamasery in Tibetan mountains by English writer James Hilton, who coined it in his 1933 novel Lost Horizon. Fast forward, Shangri-la became a real place in December 2001, when a city near the Tibet, Yunnan, and Sichuan junction officially adopted the name to boost its tourism potential. And here was I, going to visit it. 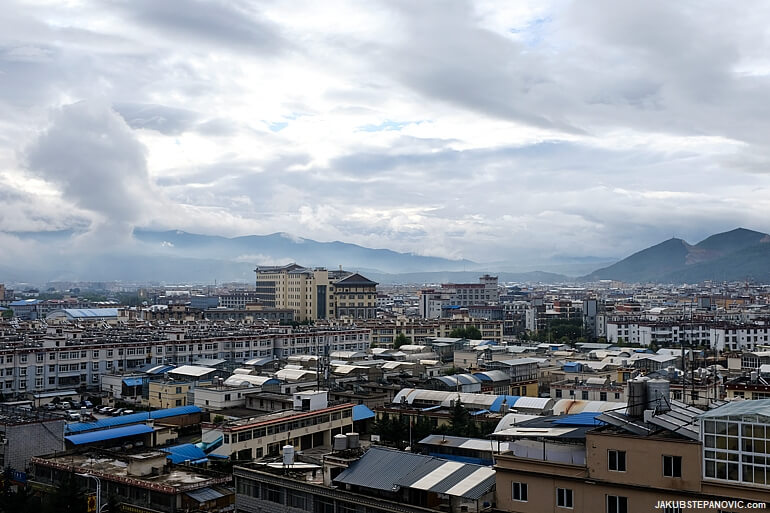 The city, situated at the altitude of ~ 3200m / 10500ft, is in the southernmost Tibetan Autonomous Prefecture, Diqing. The area used to belong to the Kham region of the former Tibetan Empire, and Tibetan is still the most represented ethnic group of the prefecture. This dictates local art, architecture, cuisine, and religion. 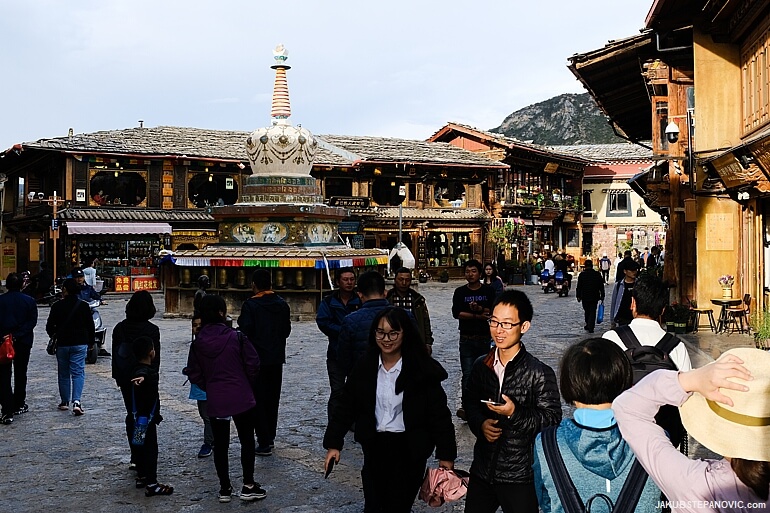 The biggest concentration of this can be seen in Dukezong district ("moonshine town" in Tibetan), located around the Great Turtle Hill. The hill itself is topped with Guishan Temple: 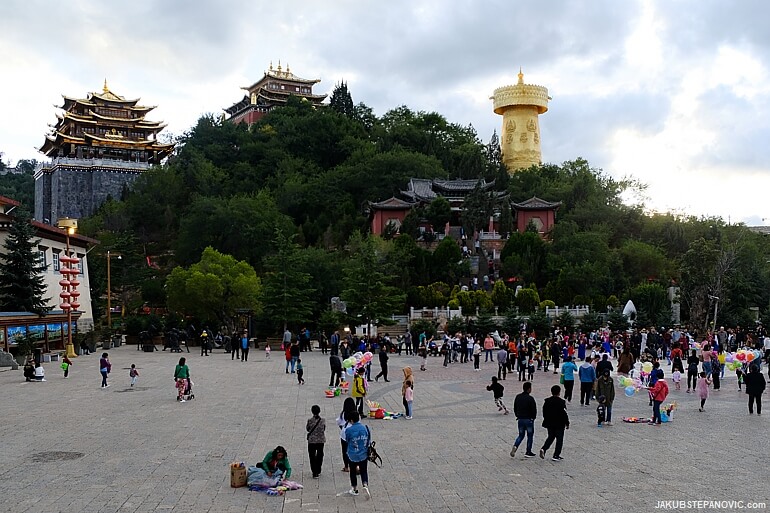 Guishan Buddhist Temple: the golden tower to the right is said to be the largest prayer wheel in the world. It has Om mani padme hum mantra in it, and it takes multiple people to get it to move.

The temple has roots in the 17th century, but most of the structures were recently rebuilt due to a 2014 fire that caused extensive damage. Still, it is full of details to enjoy. 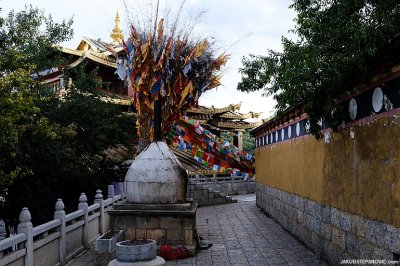 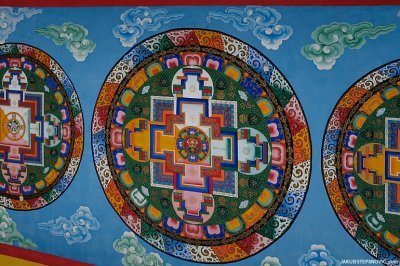 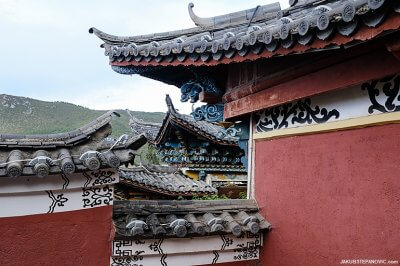 Besides the Tibetan culture around the city, it is possible to see many visible influences of Beijing's leadership. For instance, right across the temple complex is the Red Army's Long March museum, presenting that the Red Army cooperated with locals to bring safety and prosperity to the region. While it was interesting to see that side of the story, being aware of the Great Leap Forward policies, the Cultural Revolution, and the current treatment of other minorities of China's west, it was also quite unsettling.

Yet, the the overall impression the place left on me was rather good, because of the locals' attitude. Even though the city faces a pretty harsh climate and its economy can't compete with China's lowlands, the ratio of smiling people I saw here was bigger than in the other cities I visited in the country. No matter the age or activity, many locals had an expression like they are at their happiest. Shangri-la might not have the visual appeal of Suzhou or the history of Nanjing, but its spirit is truly impressive. 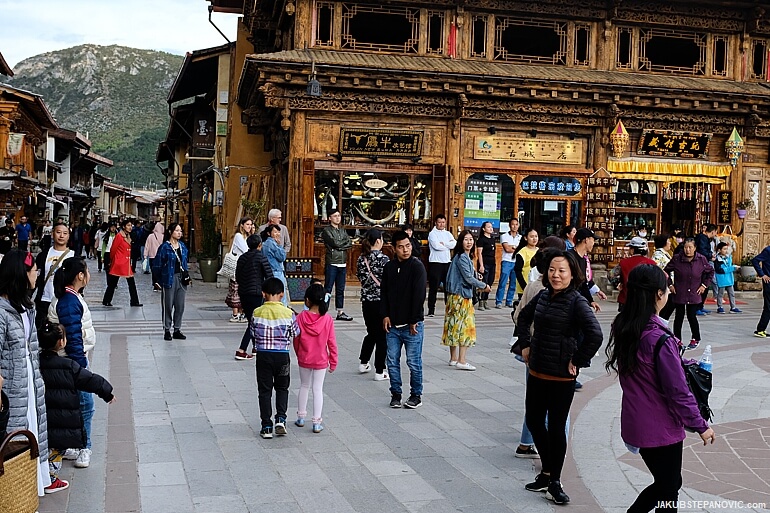 Other striking features were just outside the city, as behind a short stretch of agricultural lands are towering massive mountains. Excitement, that's why we came for! One of the closest and the most accessible is the Shika Snow Mountain, where we went next. 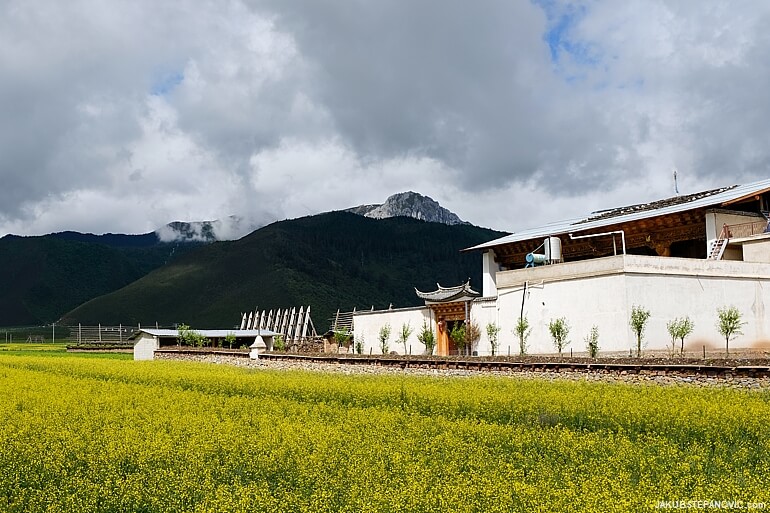 The mountain is 4,449m / 14,596ft tall - a tad higher than Colorado's Pikes Peak, my previous record in reached altitude. Speaking altitude, many of the shops in Shangri-la sell bottled oxygen, to help tourists to cope with the thinner air. It then gives a surreal spectacle: many people smoke cigarettes, then inhale oxygen, and repeat. Each to their own. We set off towards the mountain without the tanks and survived just fine.

Gaining the height rewarded us with fabulous outlooks. 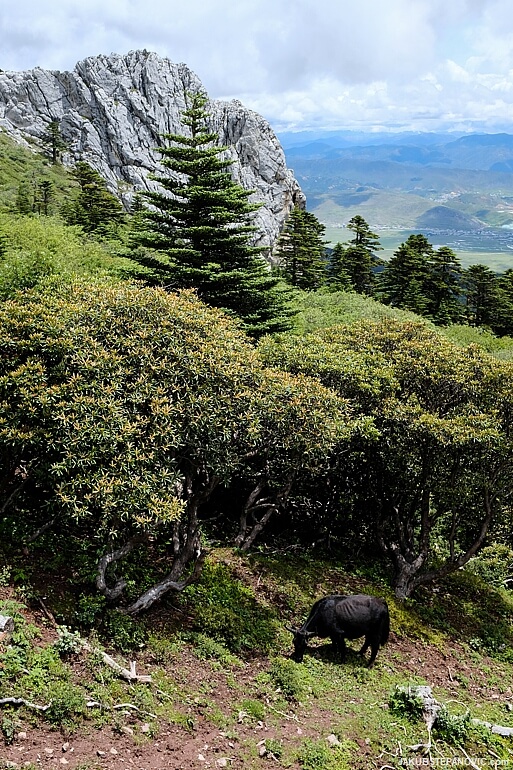 I found especially fascinating the vegetation around. The treeline here is at some 4000m / 13,000+ft. In comparison, mentioned Colorado has it around 3,650m 12,000ft and mountains in central Europe in ~1,400m / 4,500ft. The Scottish treeline is under 500m / 1,600ft. This greatly illustrates that the elevation is only one of many variables that result in the mountains' conditions.

Once at the high plateau, the views were staggeringly beautiful. 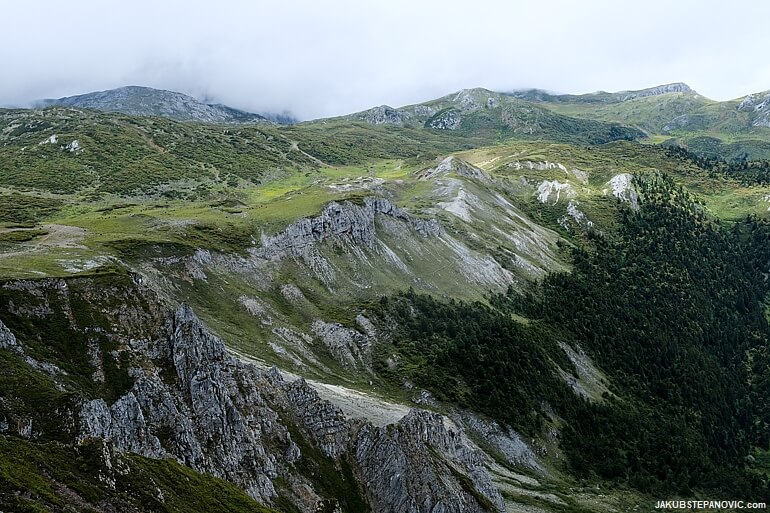 Even with the proximity to the city, we saw only a handful of people around. What a place! This is exactly what I hoped to see. Remote and rugged, yet peaceful and charming, unspoilt landscapes. There are no fabricated borders, no prejudices. The only demanded respect is the one for nature, which applies to everyone in equal doses. 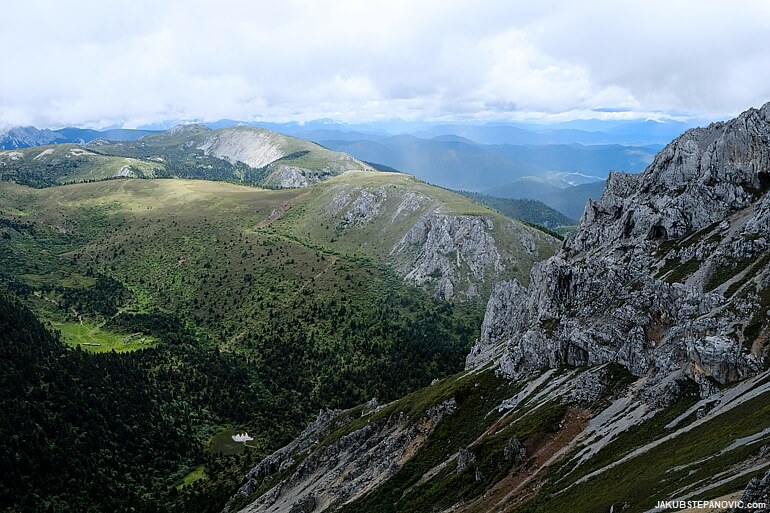 Inspiring, calming, and yet refreshing: Areas like these always seem to do the trick to me.

Looking around, the natural wealth of Diqing was evident. But little did I know that our next stop will further elevate the outdoor prettiness to new heights - or depths - as we went to visit the Shangri-la's Grand Canyon in the Balagezong Scenic Area.

Even though it started raining, getting there was promising. The canyon is a part of a steep-walled gorge holding Gangqu River, and the sole access road follows the river upstream. 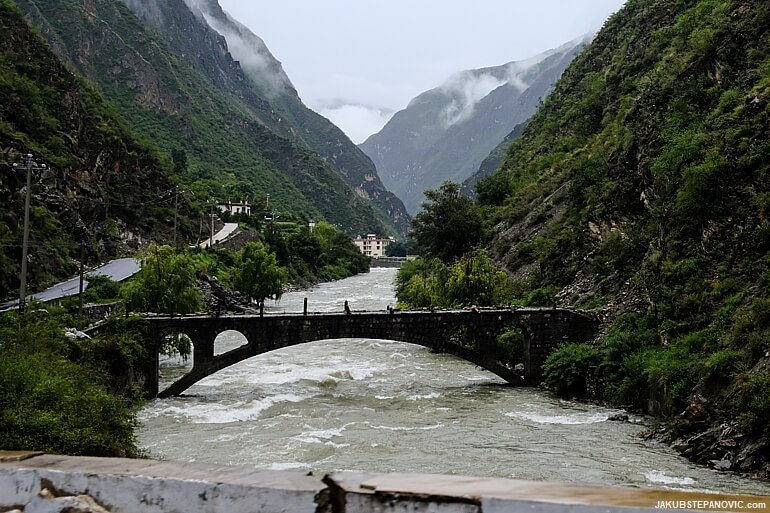 The further you go, the bigger the walls around get. 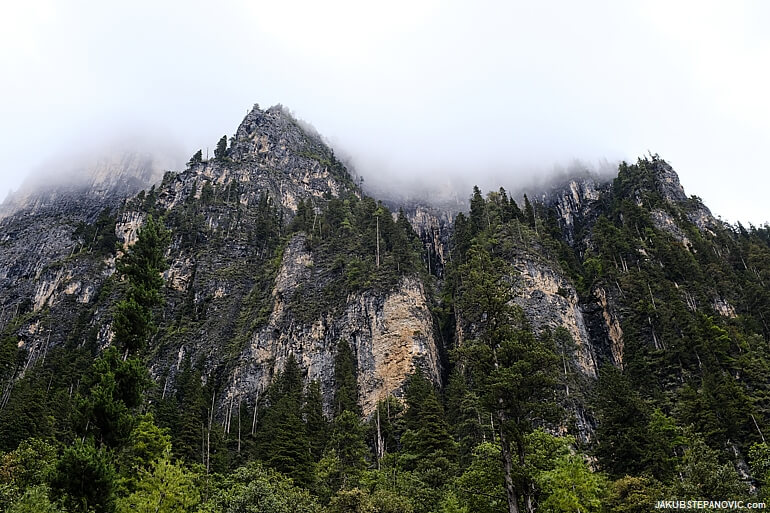 At the point where the walls are near-vertical cliffs soaring above 1000m / 3300ft, the paved road ends, but it is possible to continue deeper into the canyon by a wooden path. 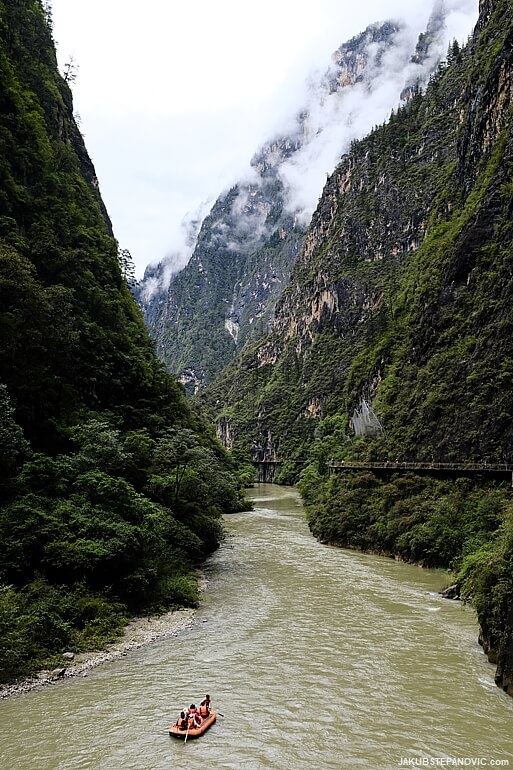 Note the path on the right side of the river.

While tourism is still relatively new to this area, the canyon is already being utilized fairly well: there's also a chance to take a raft to see the place. Yet, both the river and pedestrian traffic were pretty low - at no point was it crowded - something which can't be said about some national parks in the Chinese southeast, like the dream-like Yellow Mountain.

The rain stopped, and the path revealed canyon's true magnificence. 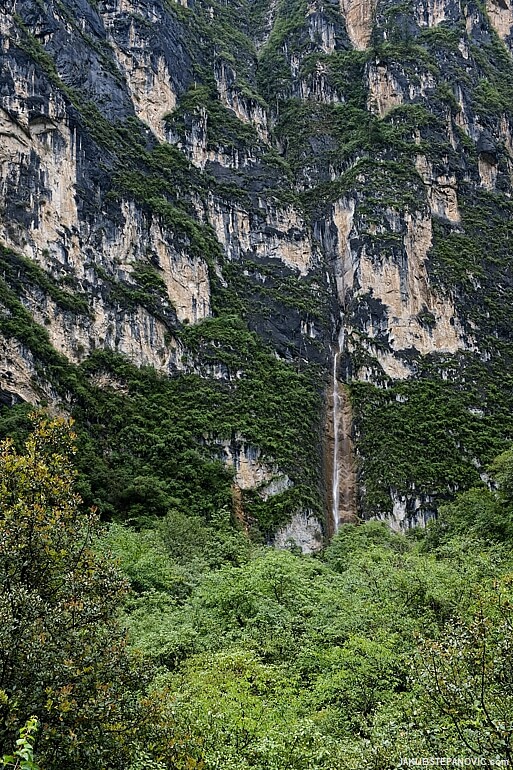 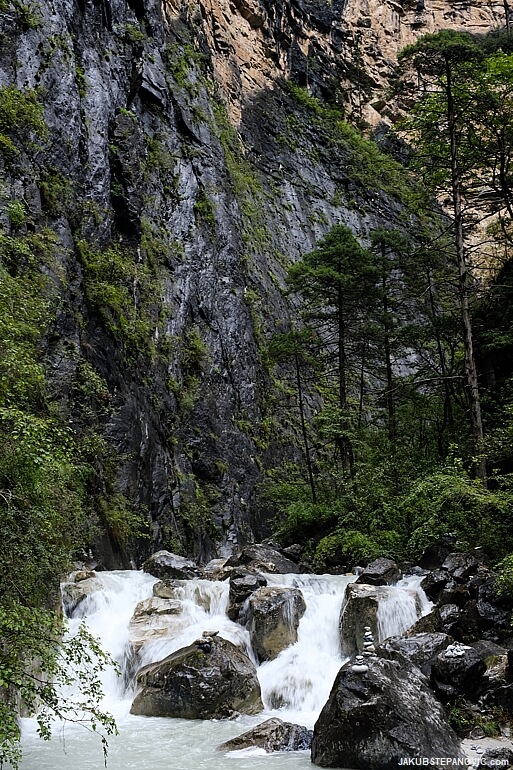 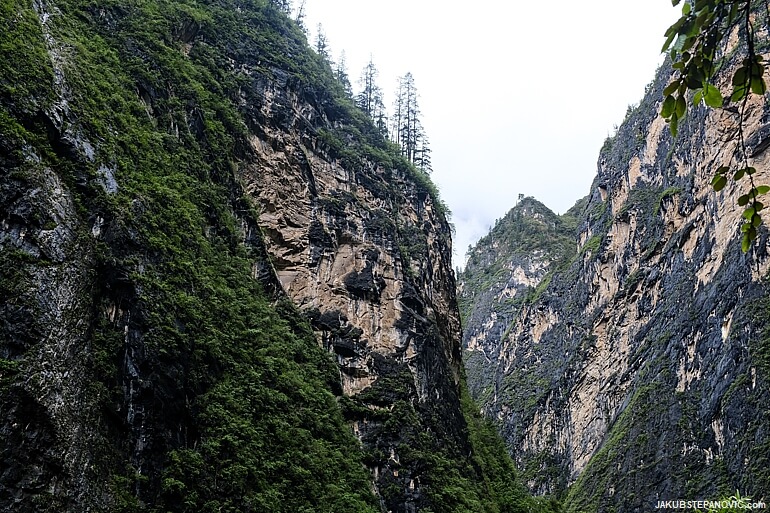 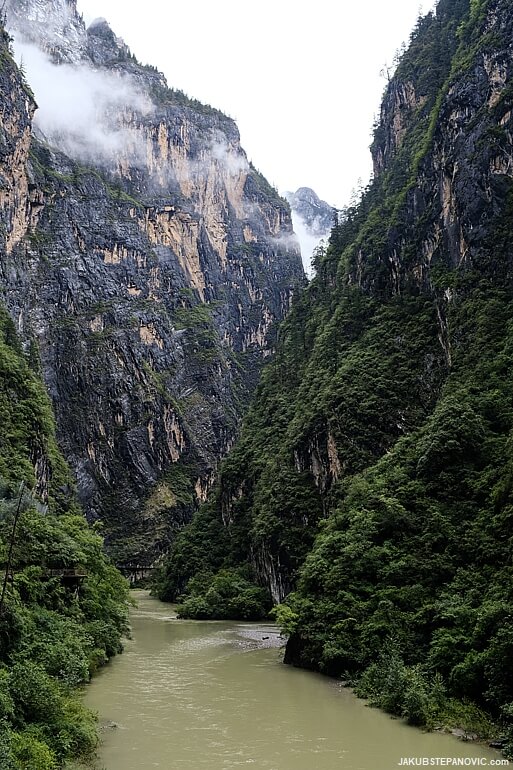 The river is fueled by glacial water from snow-capped mountains nearby.

Once we returned back on the paved road, there's a section of the wall that opens up a bit. 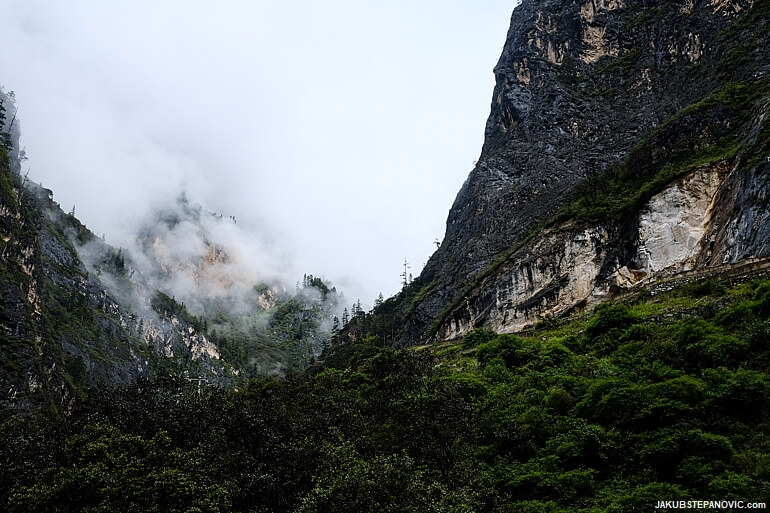 The road then leads up towards an old village, Bala - another point of interest on our itinerary. The village is around 700m / 2,300ft above the river, and so reaching it provided loads of scenic goodness. 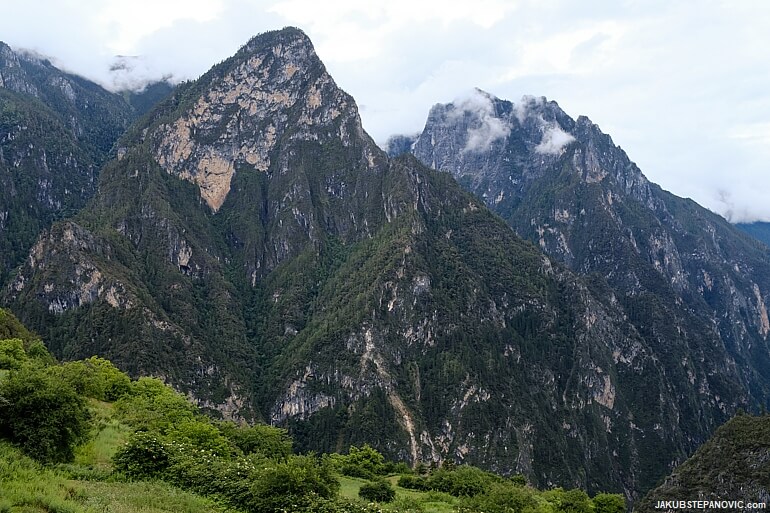 Bala's history is over 1,000 years old, but it is a small settlement counting a few houses. 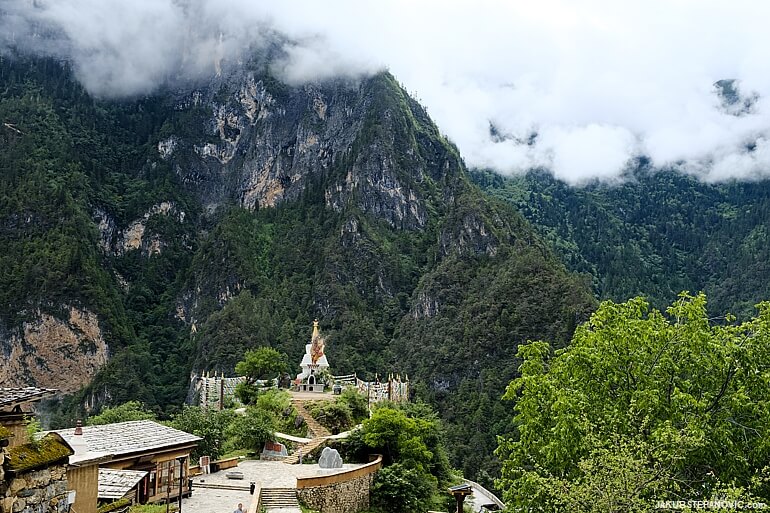 Dagoba, a Tibetan-style stupa at the edge of the village.

Until the road was constructed in 2008, it took many days to reach it. Hard to imagine how isolated the village was not too long ago. A small community far away from the conflicts and stress of the modern world, but also far from any technological and medical conveniences.

Now, the village mostly serves as a museum of the local traditions and shops for tourists. 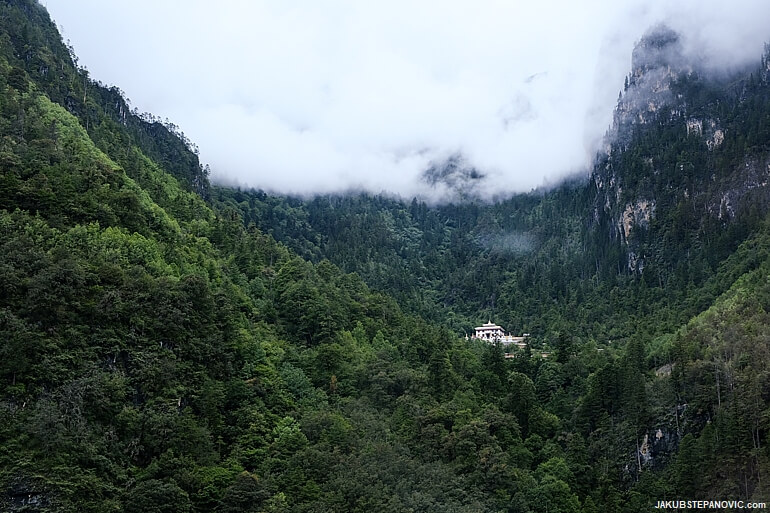 Going further up from the village and from the canyon took us to a Buddhist monastery. It was fitted with a colorful, very decorated interior. 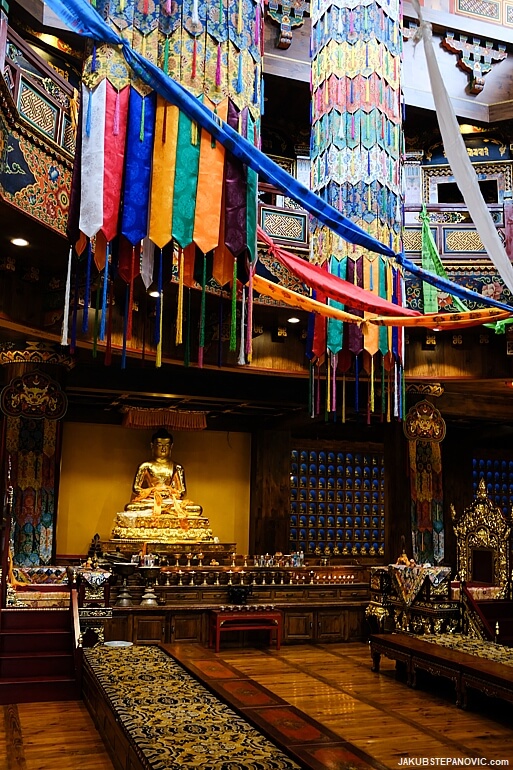 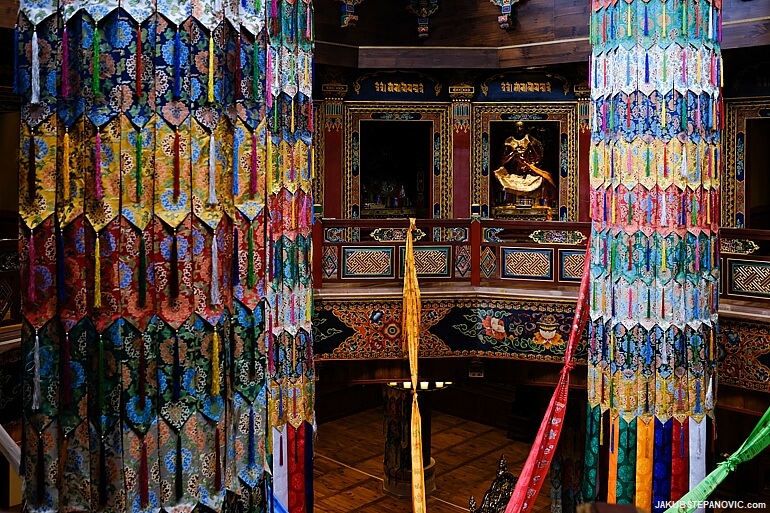 On the other side of Bala starts a shelf trail that goes towards the canyon's rim - a must! 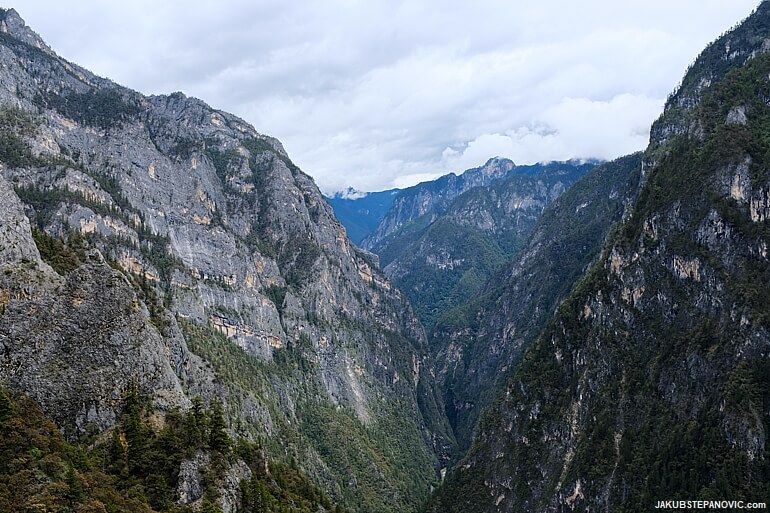 It had several viewing platforms, from which is possible to see the canyon in its full glory: 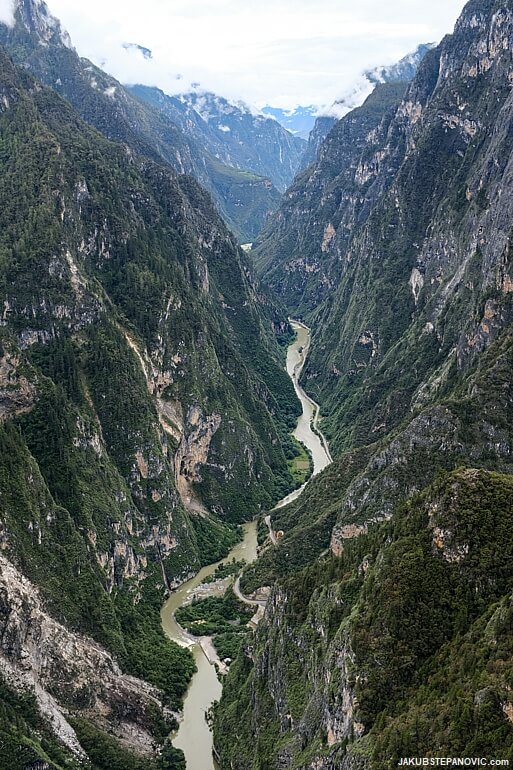 Meanwhile, the floating clouds occasionally unveiled the contours of the high peaks around. 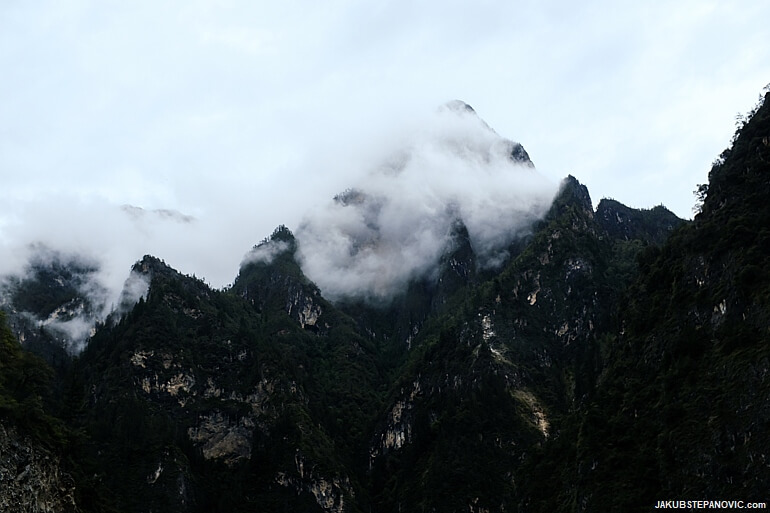 As we returned to Bala to catch a bus back down, I thought that I could spend years exploring other valleys and mountains of the region, but this journey was approaching its end. Nevertheless, I was very grateful for the colourful glimpse of what there is in store. The air got freshened up by the wind, which started flapping hundreds of prayer flags hanged near a local Buddhist reliquary, and light began to fade. 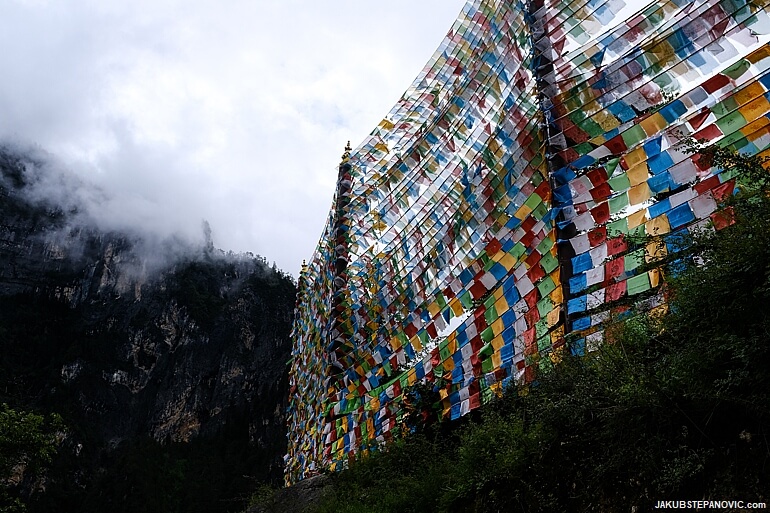 A local tourism-promoting website says that Tibetan folk songs celebrate Bala as a paradise. Whether it is true or just an advertising campaign, looking around, I might as well take it. 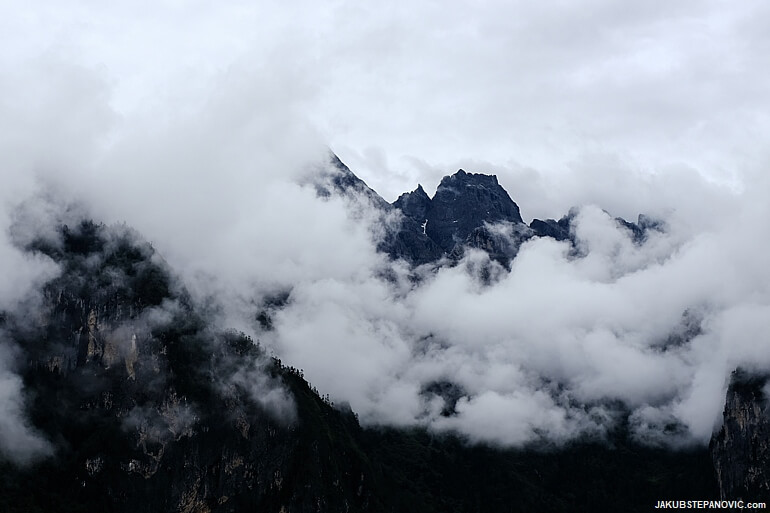 Thanks for reading! If you liked this article, you might also enjoy my other long stories, like: