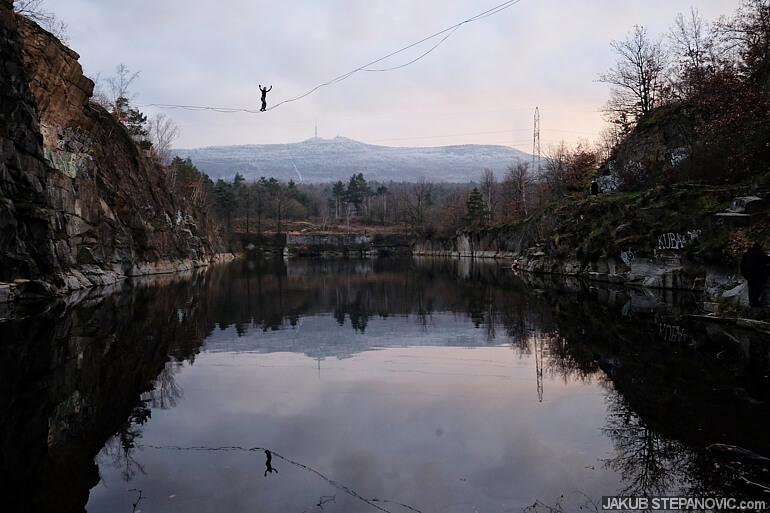 Visiting an abandoned quarry for a highline, tightrope walking session.

The quarry, Kantyna, is about 40km / 25miles south of Wroclaw. It's partially flooded, and as it has been disused for years, locals utilized it as a place to swim, practice rock climbing, have a picnic... or balance above it on an inch-wide stretched webbing called slackline. The last-named happened last Sunday, and I had the pleasure to join. Yey! 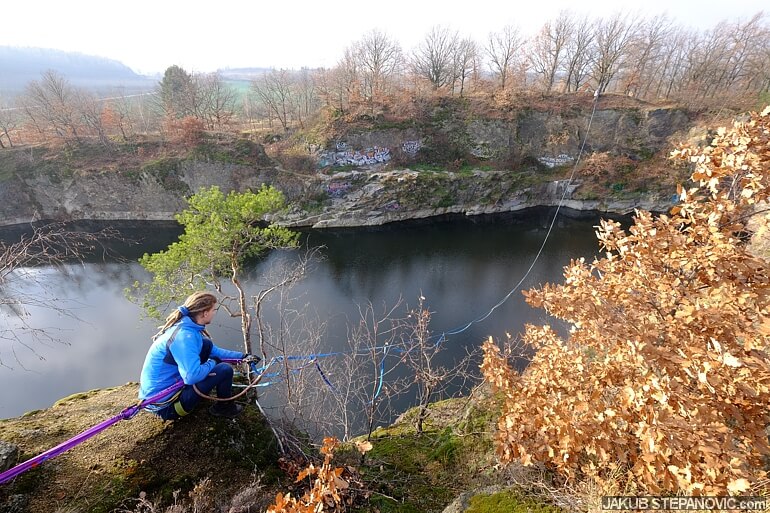 The weather was nice, and so were the new people I met. Above, Kuba sets up the line. He then walked it to the other side. 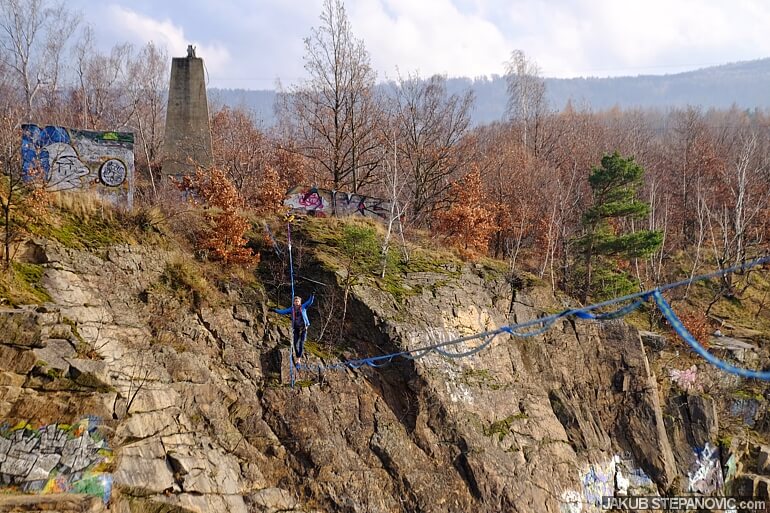 Once he reached it, the sun disappeared behind snowy clouds. Warm rays were gone, but the quarry stayed dry, which was welcomed. It was time for others to give the line a go. 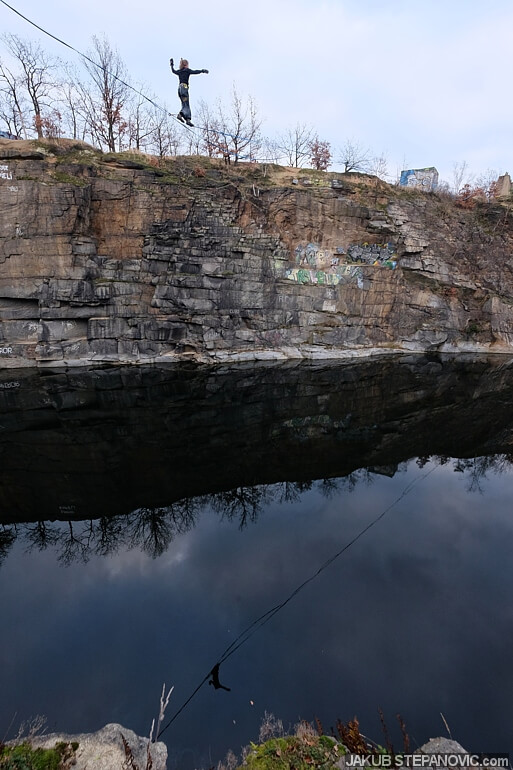 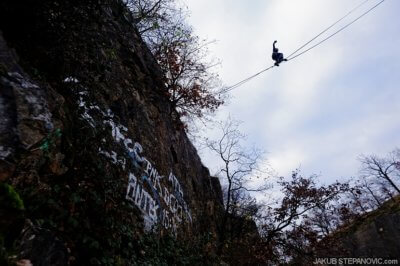 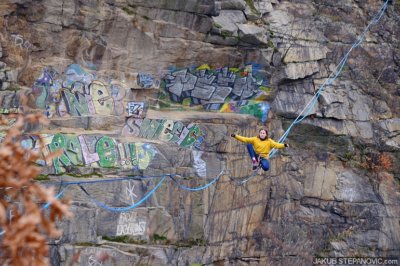 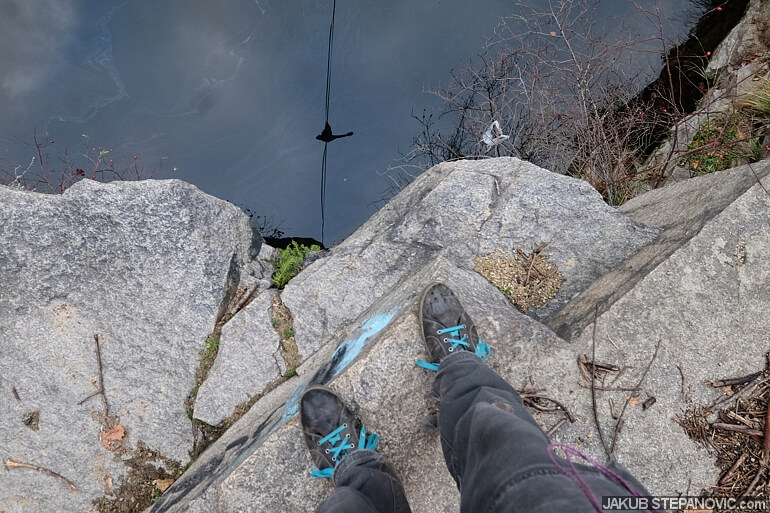 I walked on slacklines before, and the longest one I crossed was around 50m long. However, it wasn't with a massive abyss underneath. Highlines (slacklines high above the ground) are much harder to do. Even if you have a harness that saves you from the long fall, it is simply a different animal to face. The distance I crossed on highlines counts only a few steps. Moreover, that was all before I broke my knee, an injury that stopped my slacklining efforts and most of my physical activity in general. I fought with any uneven surface for a long time, never mind a tight rope

Since then, my knee got better, and I returned to slackline, too. Still, I knew that the line over the quarry, which had a length of some 65m / 215ft, was way outside my capabilities. That said, I stretched a shorter line for myself between trees nearby, so I could also enjoy the fun activity. 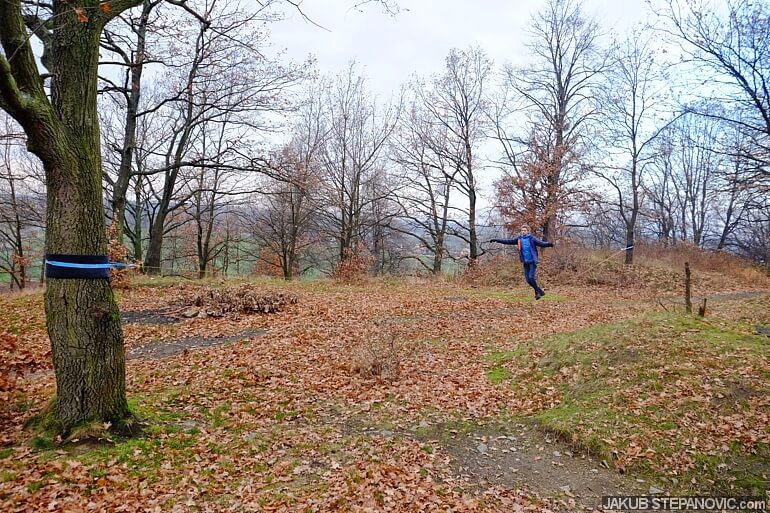 But, after everyone from the group tried the highline, I went to experience it anyway, as it is an exciting sensation no matter what. Some other sports that feature heights exposure, like rock climbing or urban climbing, include stable points and a surface wall in front of you at all times. Those factors can ease the mind a lot. On the other hand, on a highline, there's nothing but a slim strap, wobbly as heck. It moves with the wind; it moves with your motion; it moves constantly. And it is an inch thin! Now try to walk on it... You feel the air around. So, my idea was to sit on it, swing up and down, maybe try to stand up, and go back. 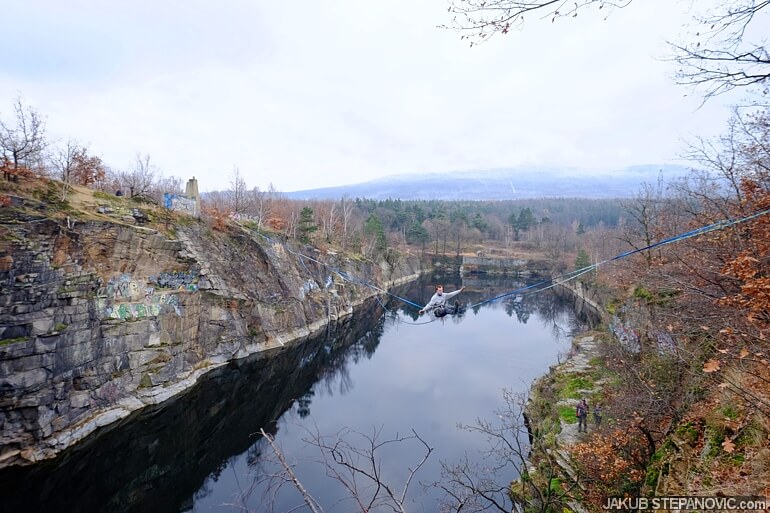 That's me. Thanks Kuba for taking the pic.

But then, I wanted to try a step, and before I knew it, I fell. Even if one has a harness, the leash prevents falling all the way down is at least the length of your legs — falling still gives a good swing in the empty space. That's when it went downhill. See, the knee wasn't my only injury in recent years. I also dislocated my shoulder some three years ago, and it's been weak ever since. Well, and as I swung down and the leash caught me, the shoulder gave up — I dislocated it again. "Heaven's sake!" Swears resonated through the quarry. Since it wasn't the first time this had happened, I knew how to slip the shoulder back where it belongs. Yet, doing so while suspended mid-air was, umm, a new experience. The struggles went on; reaching solid ground with only one arm functioning properly and not being Jason Bourne wasn't a piece of cake either. Oh-uh.

I comforted my sore state with food and picture-taking, and things turned bright again, literally. The sun made a peek out of the cloud layer, flooding the location in golden colours. 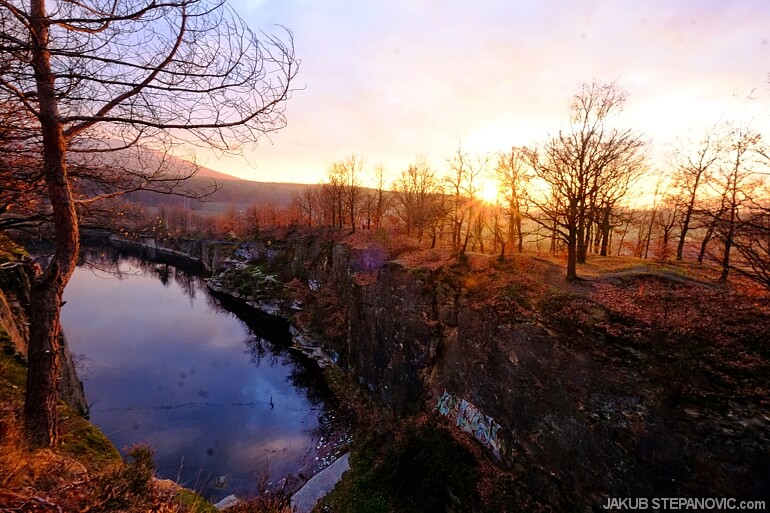 Walking around with my camera while others made the most of the highline was relaxing at best, and sometime later, I returned to do a few rounds on the short line. 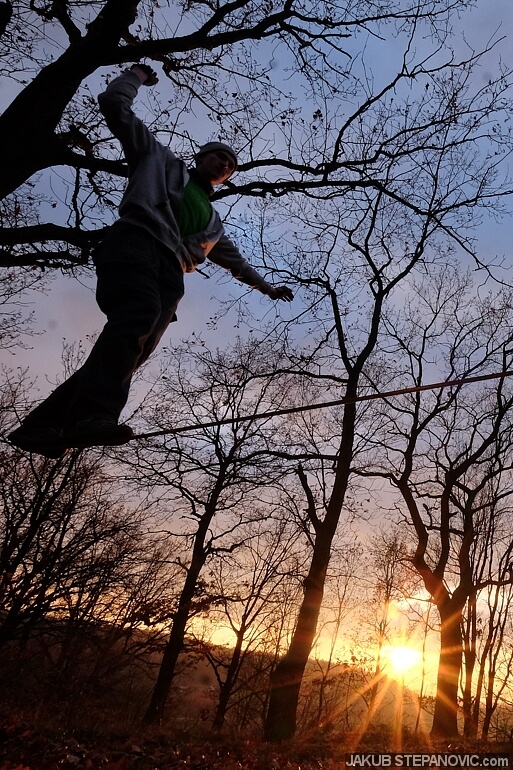 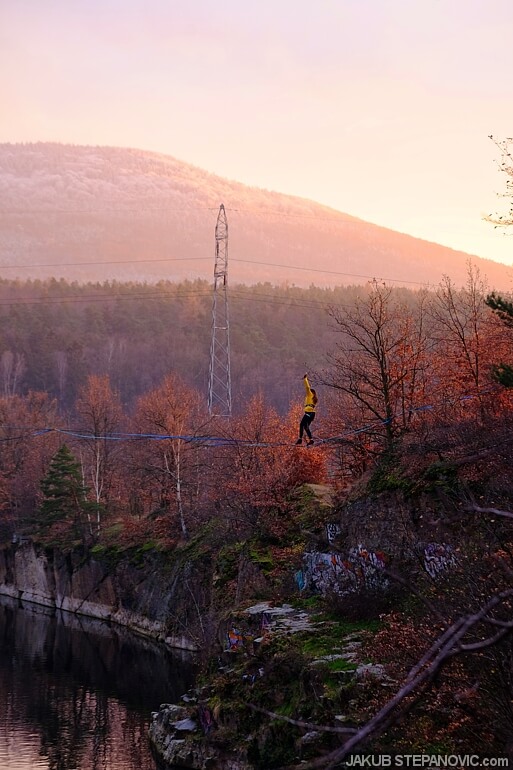 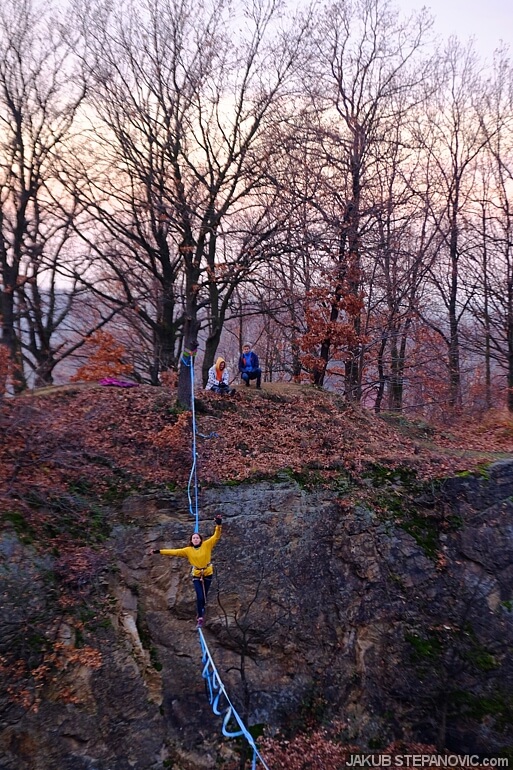 The daylight started declining soon; thus, we called it a day — a good one. Aye, it might not be the best scenario, but these outdoor days with good folks and fun activities are too good to avoid. As some say, "Better broken body than a broken spirit." I'd take happiness over fitness any day.

If you liked this article, see my previous posts about slackline, or browse my Blog Archives for more topics and categories. Thanks for reading!