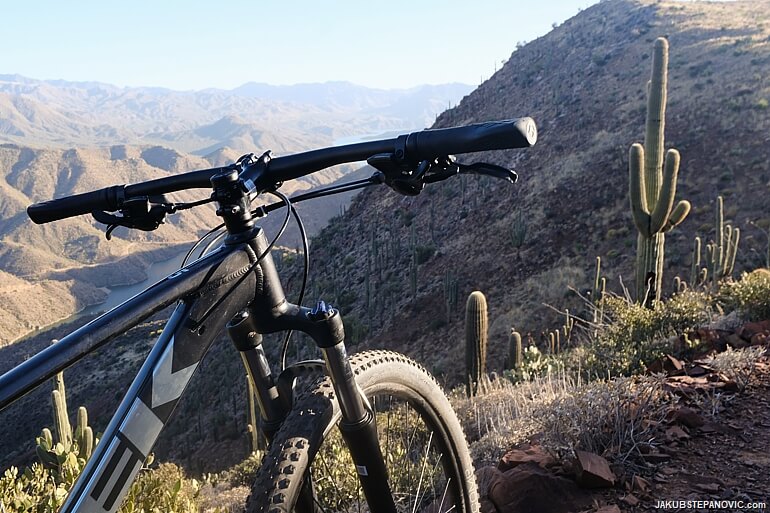 Hot, Yet So Cool

How I went mountain biking in the Sonoran Desert.

It's been quite a while since I was in the US the last time, and I knew that going back would be exciting. I just didn't know where, when, and how will it be. When the first two, Arizona this spring, became clear, the how part looked like it would have something to do with my career. The reality didn't get that memo, though. But it's okay; I ended up having an outdoorsy adventure instead.

Regarding Arizonian nature, I knew the region for its canyons but not much else. I was keen to experience more of the state's natural wealth, so I looked into a map to plan a trip that'd encompass some diversity and won't take all day. That way, I could survive the blistering AZ heat. Being used to the mild climate of Brittany, the temperatures here were harder to adapt to than the nine-hour time difference.

I devised an MTB loop on a ridge next to the Theodore Roosevelt Dam that allowed me to see a lake, mountains, and the saguaro cacti, all while having fun cycling. Getting there was also an opportunity to re-experience driving on the wide and long US roads. 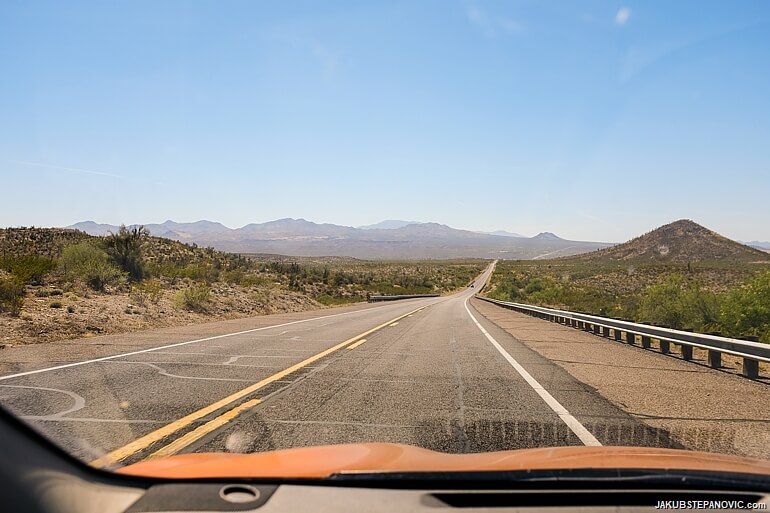 Much better than the congested Phoenix area.

When I got close to the lake and saw an impressive steel-arch road bridge, I parked and continued on a bike. Right on, let's get rolling! 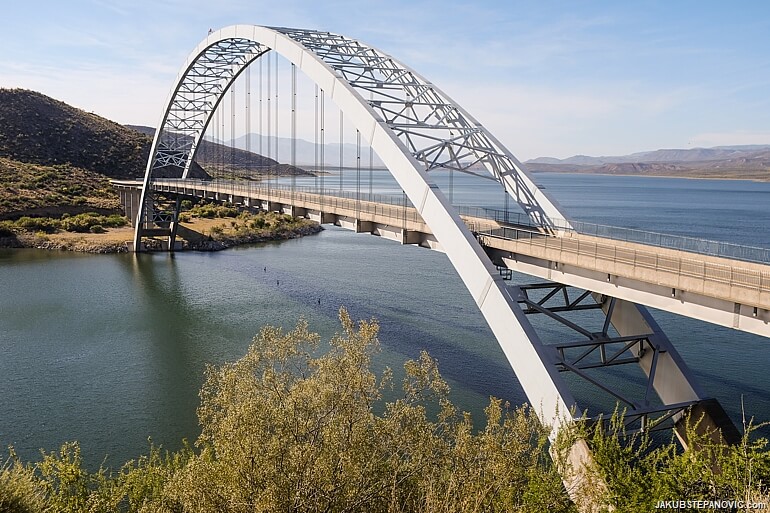 I relish seeing engineering pieces like this bridge. It is from 1990, its span is 1079ft (329m), and American Consulting Engineers Council listed it as one of the top twelve bridge designs in the US. Cool! Before I cycled on it, I checked out the dam nearby. Having the two next to each other is like an open-air infrastructure museum. 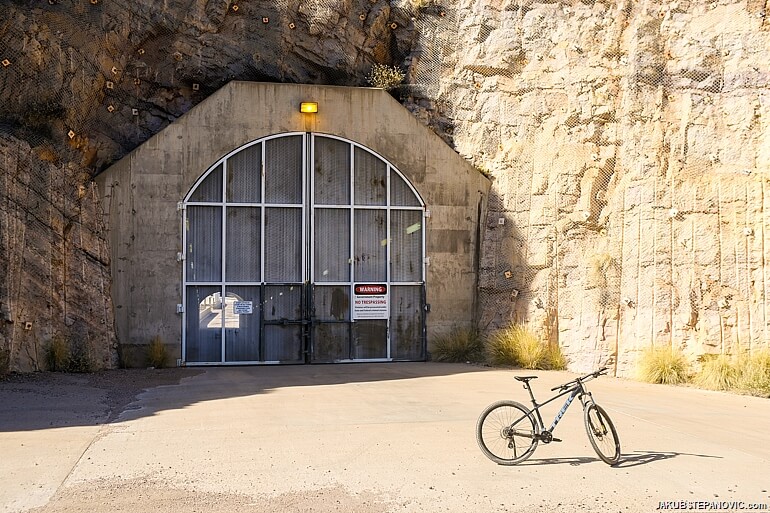 After crossing the bridge, the road winds on the lake's shore and looks pretty neat. 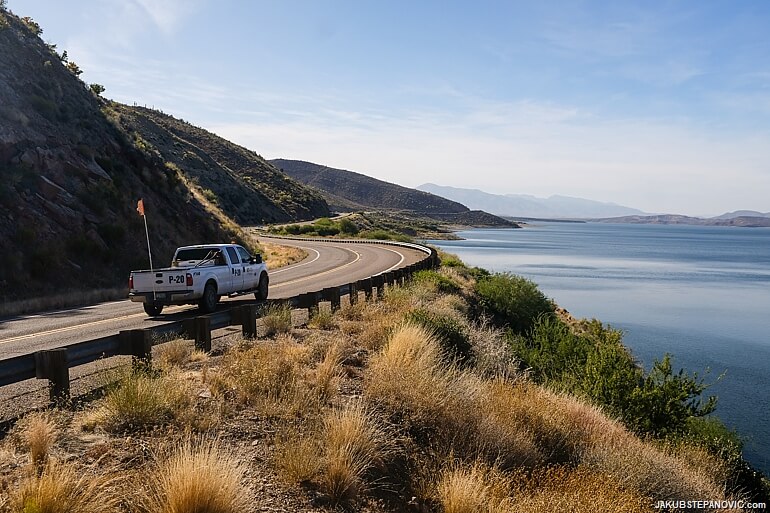 Yet, I wasn't here to do road cycling. See the slope to the left of the road in the pic above? That's where I went. Steep, it was! I joined a path called Vineyard Trail, which gains over 1,100ft of elevation in the first 1,5 miles. After assessing the combination of the trail's incline, the weather, and my fitness, I ended up carrying the bike up on my shoulders. 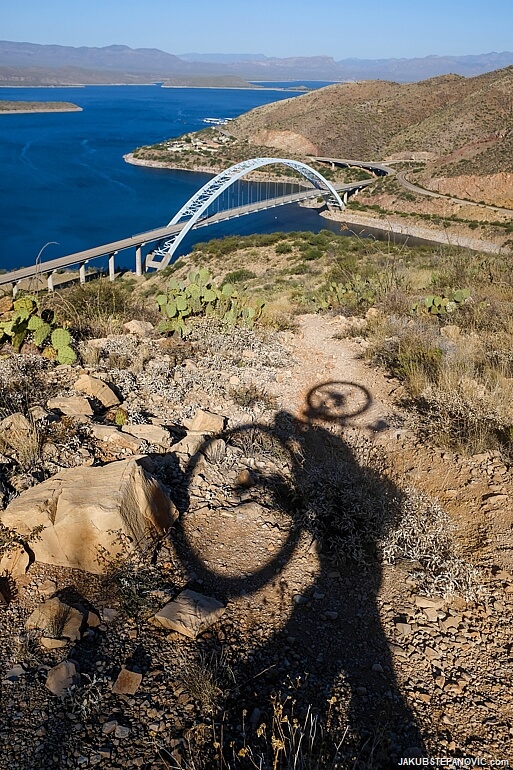 Climbing something similar shouldn't be mention-worthy; however, I found it quite brutal in the scorching conditions. It was so hot that I felt as if my respiratory system was made out of those heat-shrink electrical tubing; every breath in was dryer and harder than the last one. It was like ingesting lava. At least, the quickly-gained elevation offered solace-providing outlooks on the lake's saturated azure surface surrounded by rugged mountains. 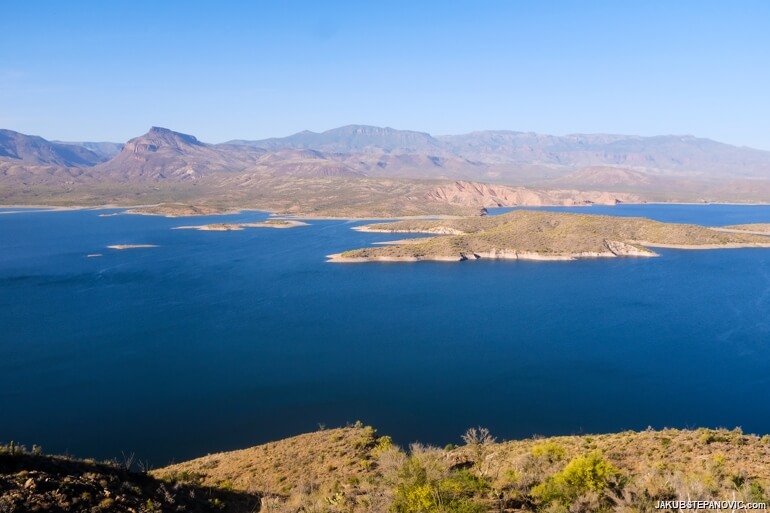 When I got on the ridge, I depleted over half of my drinking water. Not good, considering I just started. But then, the trail gradient became more user-friendly, and suddenly, exhilaration overrode the heat discomfort: I could ride the bike. 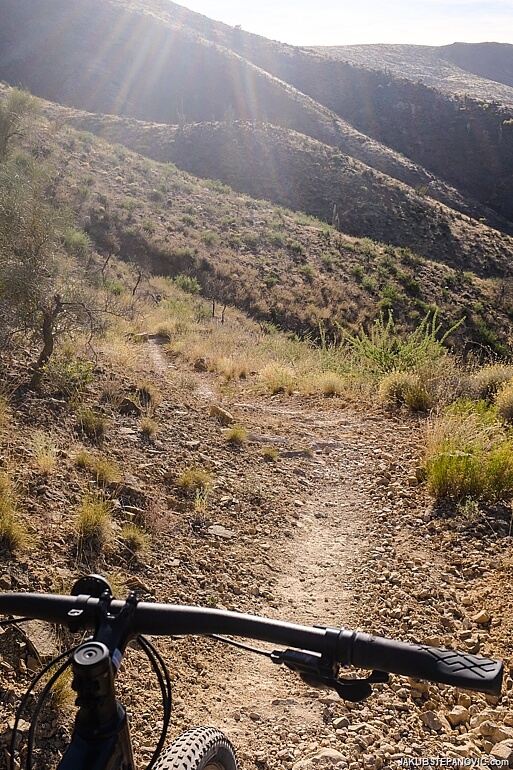 Oh, this was excellent! The trail could be a tame affair on some full-suspension bikes. But on the hardtail I rode, it was technical just enough to have a total blast. The gravel surface is occasionally spiced with bigger rocks, and one has to be firm in choosing a good line. 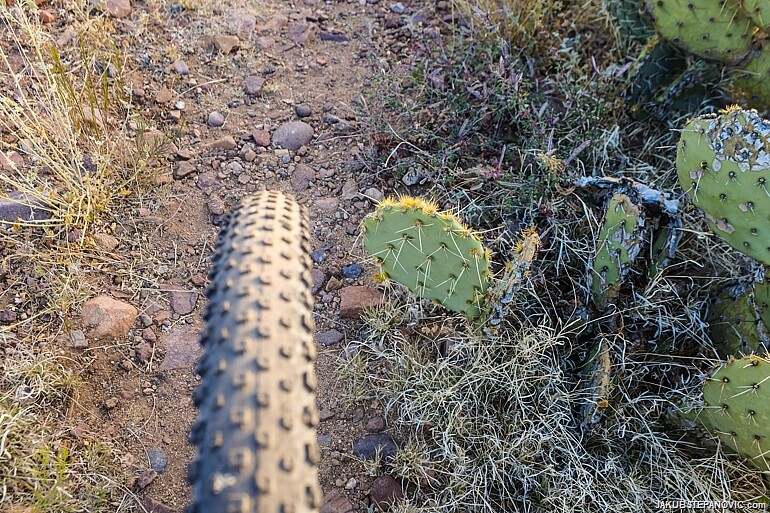 You don't want to go off the trail when there are spikes everywhere.

I enjoyed navigating the wheels between the prickles on the ground, but in Arizona, thorns are pretty much on everything, everywhere. I didn't have gloves with me – the luggage I packed to AZ this time had shirts and a suit, not my riding gear. And so, whenever I clipped some tall grass or bushes with my handlebars, my fingers got a new set of stings and scratches. Still, that was no bother since the outlook in front of me looked this terrific: 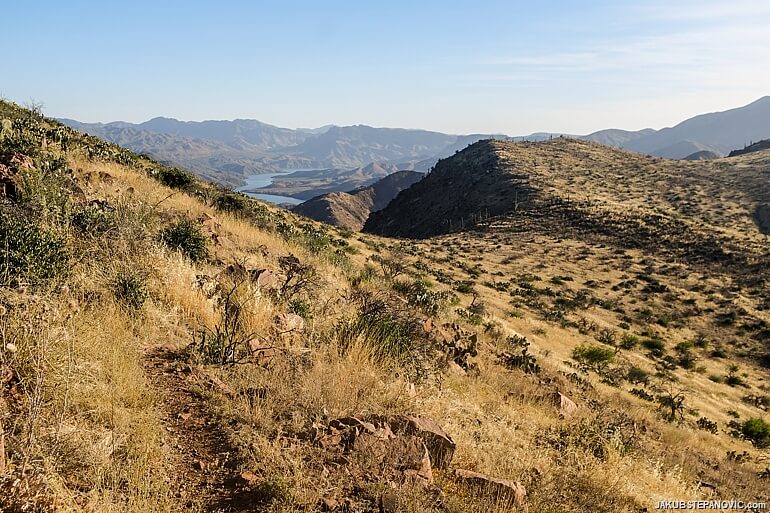 My entire angle of view was spectacular. Turning my head from right to left, I saw a rolling landscape from the north gradually rising into the Four Peaks Wilderness to the west, above whom the sun slowly started to set. The southwest dropped down to the Apache Lake, and the Superstition Mountains to the south added icing to the cake. 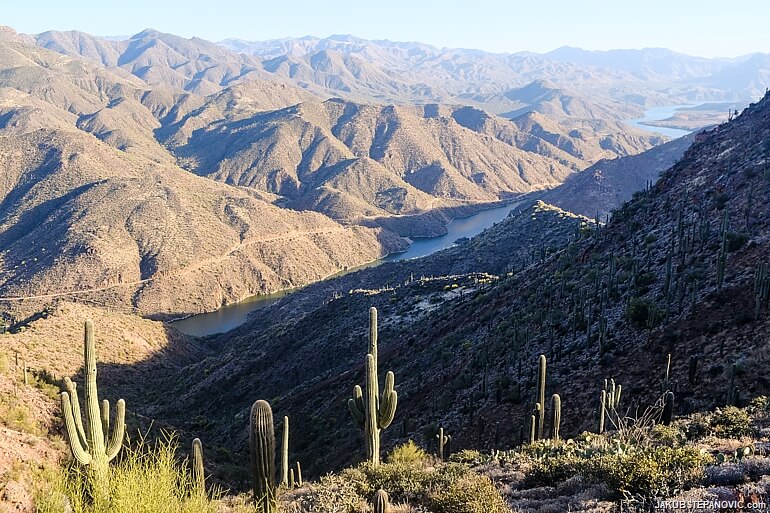 Moreover, many saguaros started to emerge. They were something I especially looked forward to; I felt like my visit to Arizona would be incomplete if I wouldn't see these majestic symbols of the American West. 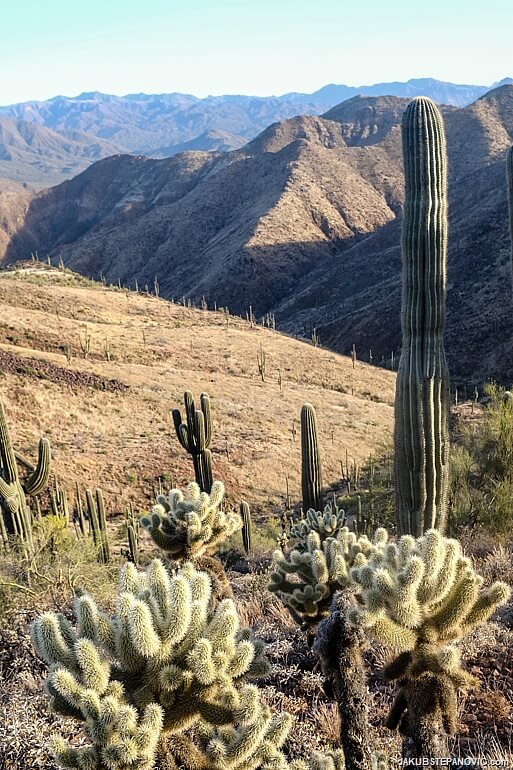 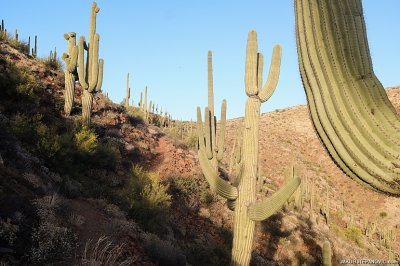 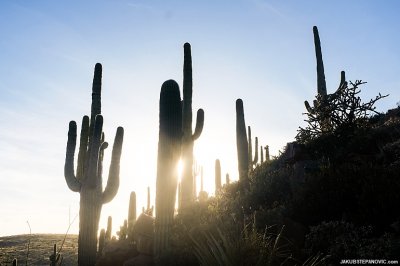 In the past, I saw a few saguaros in botanical gardens. But seeing them in their natural habitat elevated the fascinating plants to new heights. It takes over 20 years before a saguaro reaches a height of 3ft (1m) and another 50 years before they may grow their first side arm. And now, I entered a forest of them. Oh, so cool! 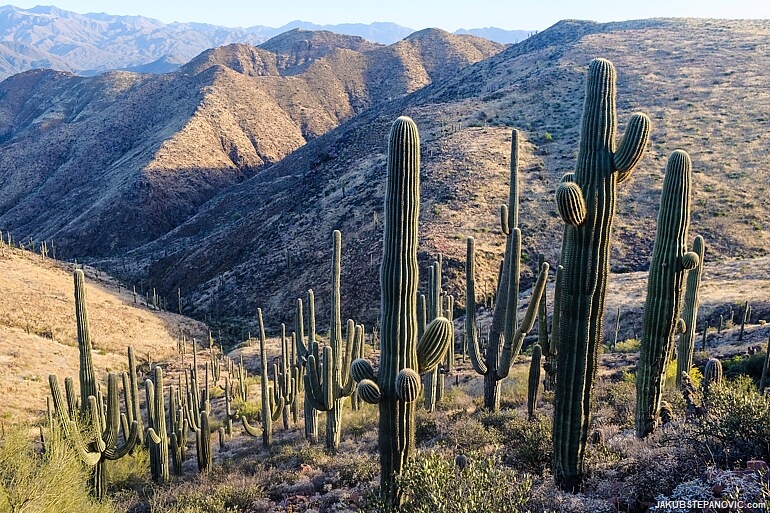 The feast for the eyes wasn't the only thrilling factor here: the trail delivered too. 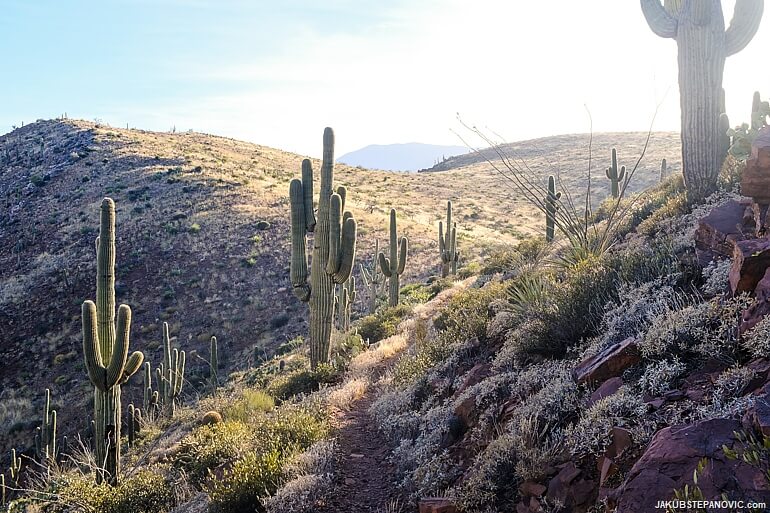 It featured a downhill section over a decent-sized rock garden, which was fun! A bit of a gravity-aided bike action always seems to improve things, even if they are already pretty grand. And when it leveled again, more vistas entertained me while I caught my breath. 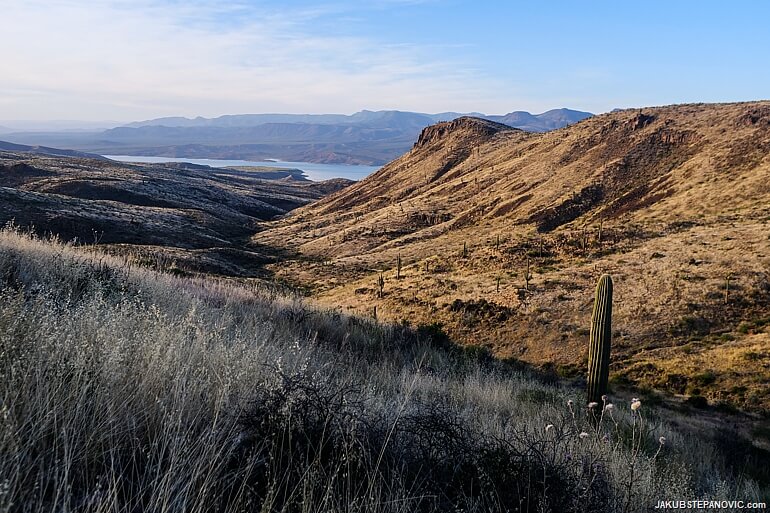 By this stage, saguaros started to disappear. When researching the trip, I learned that the Vineyard Trail is a section of the larger Arizona National Scenic Trail that traverses the state, and apparently, this is its northernmost location with these cacti.

Meanwhile, the sunset was in full swing, and I had to crack on. My bike torch was sitting in my storage in Europe, right next to the gloves. I could also use more water. Conveniently, the trail widened into a 4x4 road, making progress quicker while still bringing new delightful perspectives that inspired me to ride. 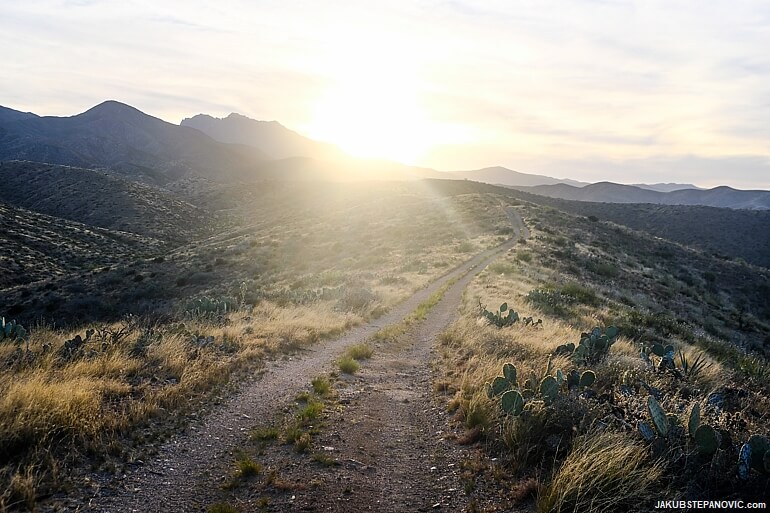 Once the sun retreated behind the horizon, the desert's color turned into purple-ish hues, and the temperature finally dropped to pleasant digits. 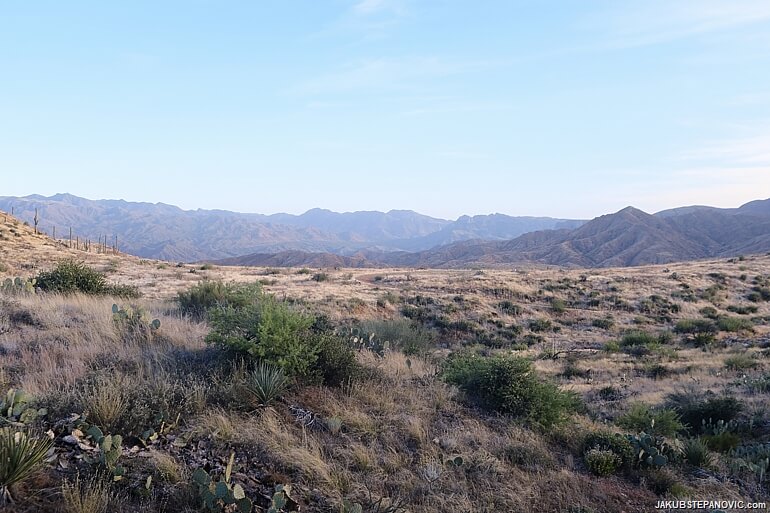 Could it get any more euphoric? Indeed! The road turned downhill back to Roosevelt lake. 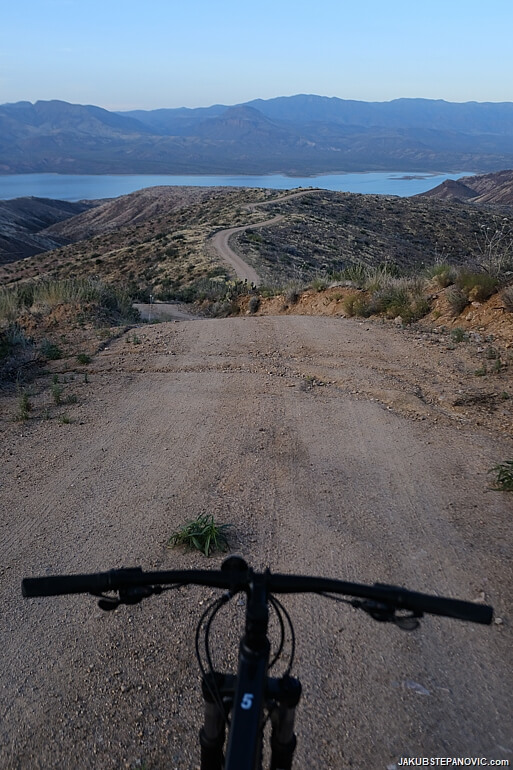 While I thought about riding down the same way I came at one point, this proved to be the far better choice. The hardtail was in its element, and so was I. Hey hey!!!

Before the last section of the descent to the lake, I made a quick diversion to see the mountains in the fading light. 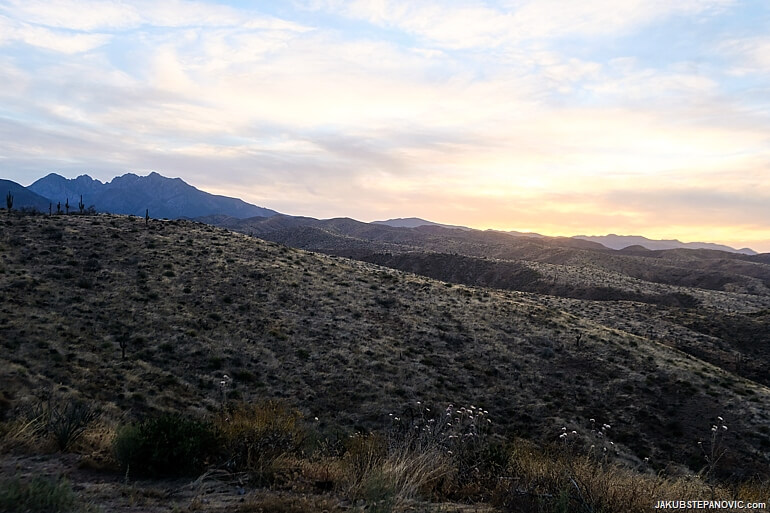 There, I met a guy standing next to his big SUV, appearing as joyful about the nature around as I was. He said that he is going to camp somewhere here in his truck for the upcoming weeks. I recalled how I slept in my car while exploring Colorado, and we started chatting. The guy, who looked like he was in his fifties, told me that he got trapped in the American corporate world and that he's finally catching up on living. We agreed that exploring the freedom of being out and about is an excellent way to do so. Then we said goodbyes, the guy drove up into the hills, and I dropped the last 350 feet to the lake. "I might not have used that suit I brought with me, but I definitely feel alive," I thought.

Approaching the lake, I turned to the Haigler Canyon Picnic site. It has access to the water that I couldn't design better: One can ride a staircase down to the waterfront and then return to the road by an easy step-free path that goes around. Before I left, I took in the increasingly vivid sunset colors and filtered the lake's water to drink some. 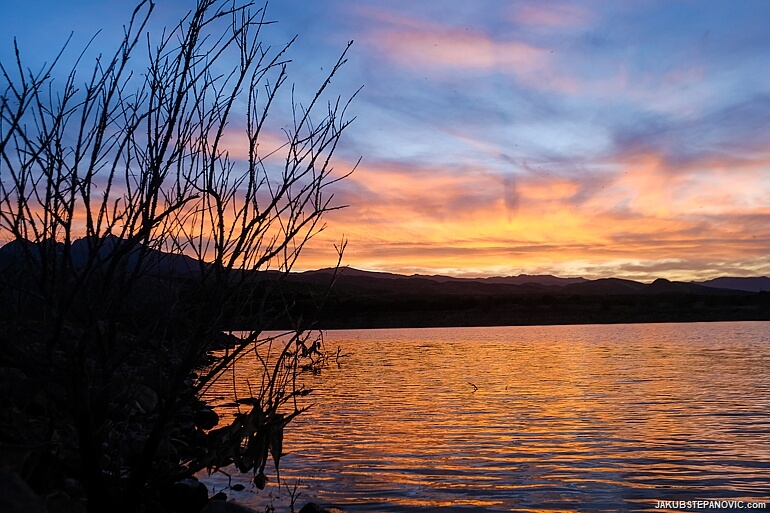 All that remained was to cover the last few miles to the car. They were on asphalt, but it was okay. The traffic was low and the excitement high. 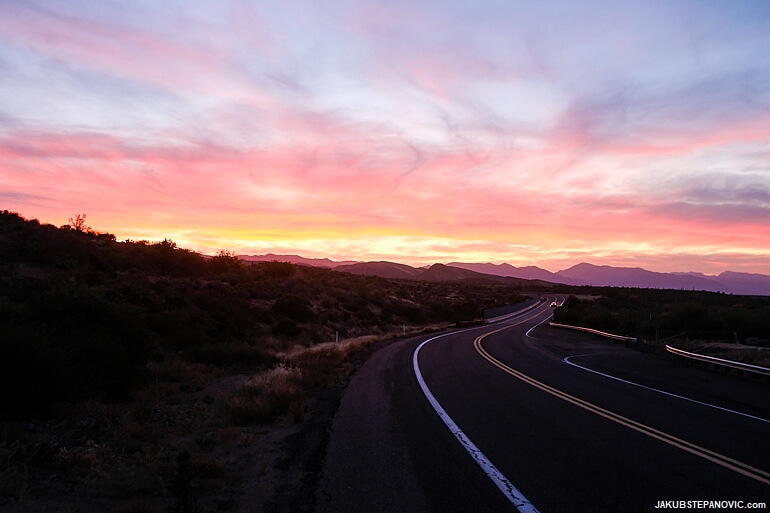 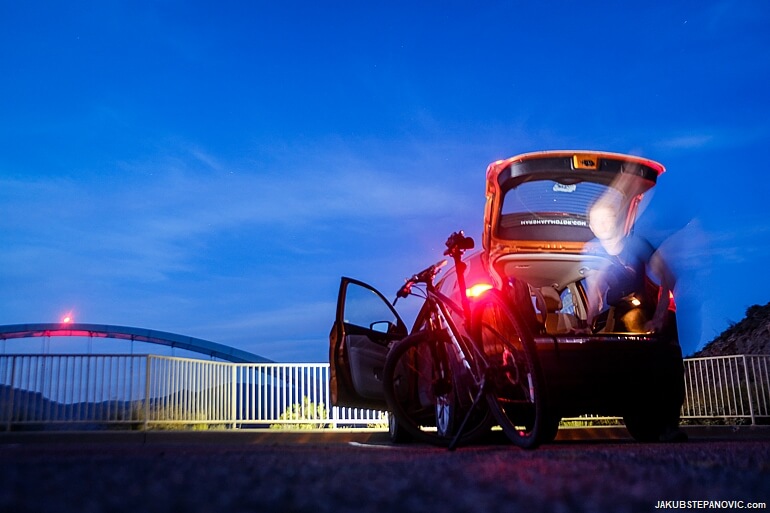 Journeys like this give me space to realize it and appreciate the people who believe in me.

If you liked this article, you might also enjoy my other posts from the US or stories about..: