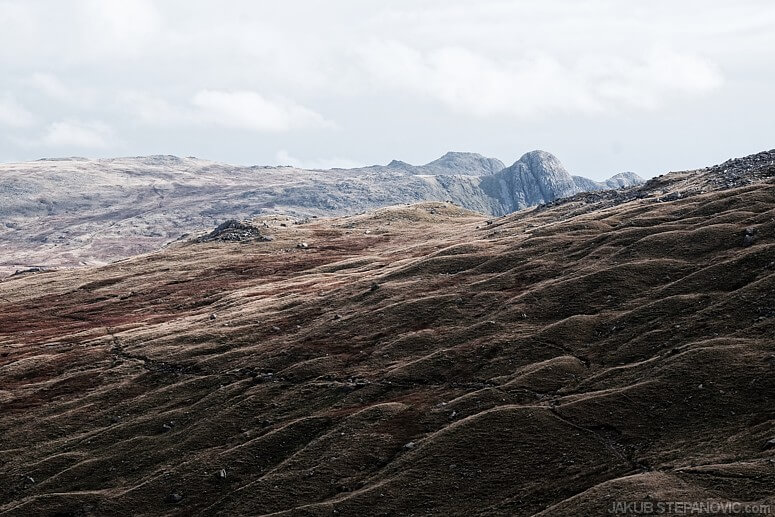 One thing: the tallest peak in England. A simple plan, but it was a proper full-day hike.

England has four mountains, all of which are located within the Lake District, which are higher than 3,000 ft (914m). After we scaled one of them – Helvellyn – the previous day, we planned to see the tallest: Scafell Pike.

There are two main access routes to it: one goes from Wastwater, England’s deepest lake, while the second one is from Great Langdale. We opted for the latter, as it was closer to our campsite near Helvellyn. Since we arrived there the last night, we were ready to go as soon as the sun rose. And boy, that was an affair: 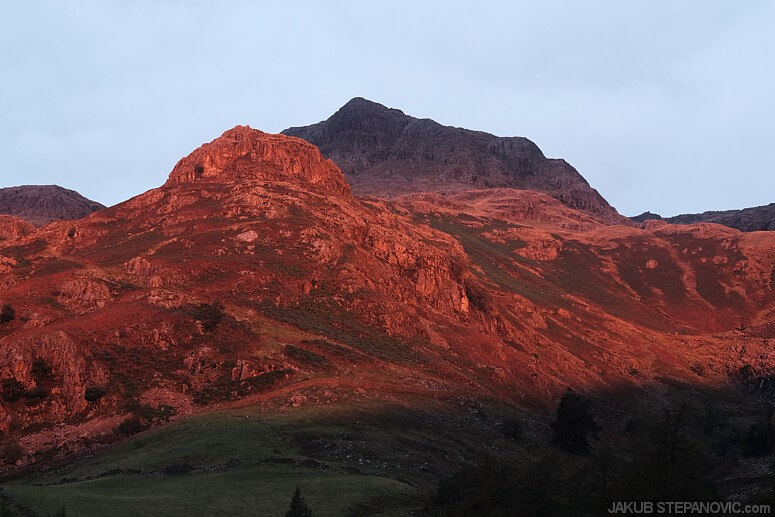 Not a bad way to start a day.

These colors lasted only for a few moments. By the time we hit the trail, the sky had quickly covered itself with a good layer of clouds. The beginning of the path goes through sheep pastures at the bottom of the valley of Mickleden. 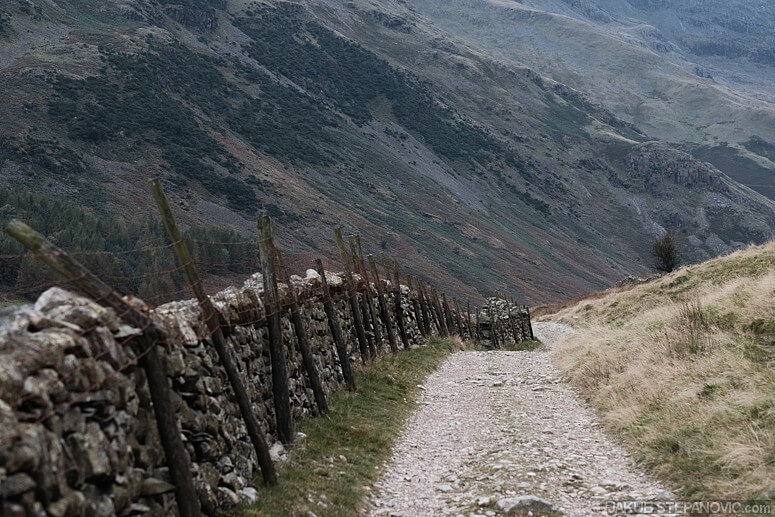 After a few miles of mostly flat road, terrain changes rather dramatically. 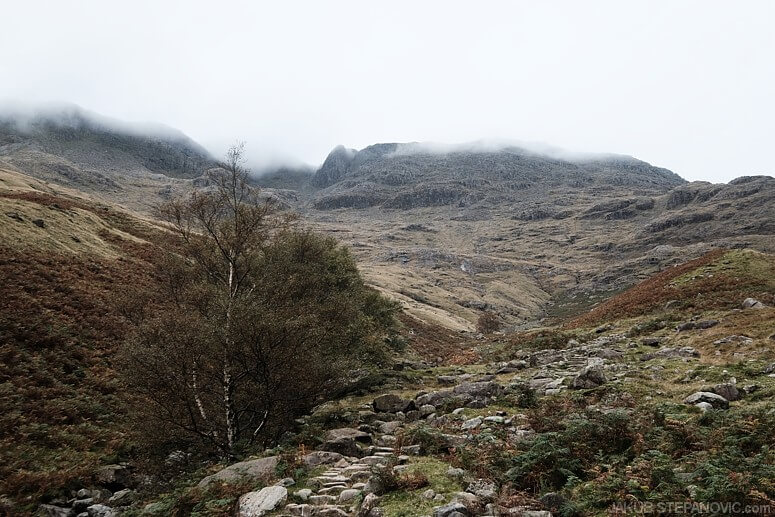 the elevation has to be gained somewhere.

The next section is about reaching a mountain pass named Esk Hause, gaining around 500m (1600ft) in height over 2.5km (1.5mi) distance. 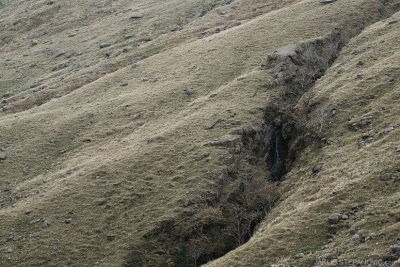 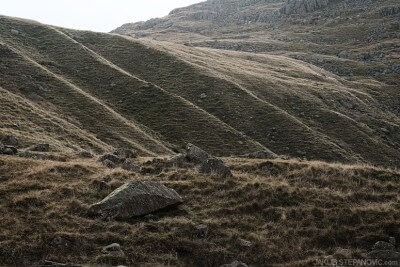 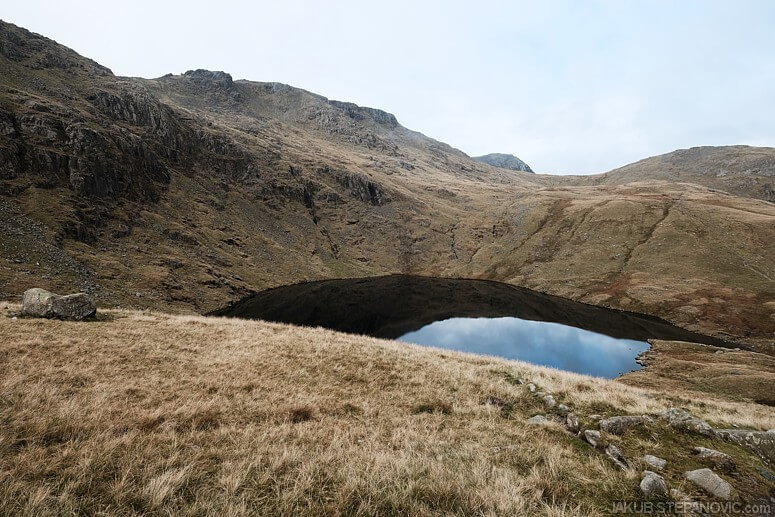 That's where we took a break and as we were chatting and eating. 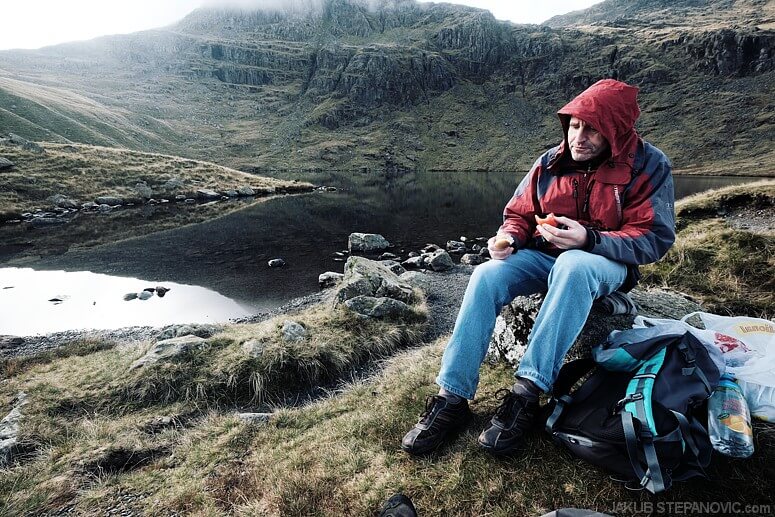 The clouds broke a bit. This opened great views at the surrounding landscape. 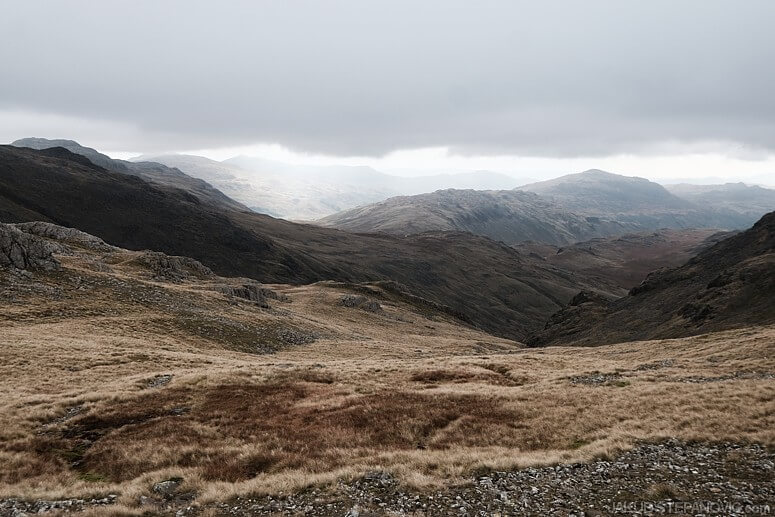 And also allowed the sun to do its magic. 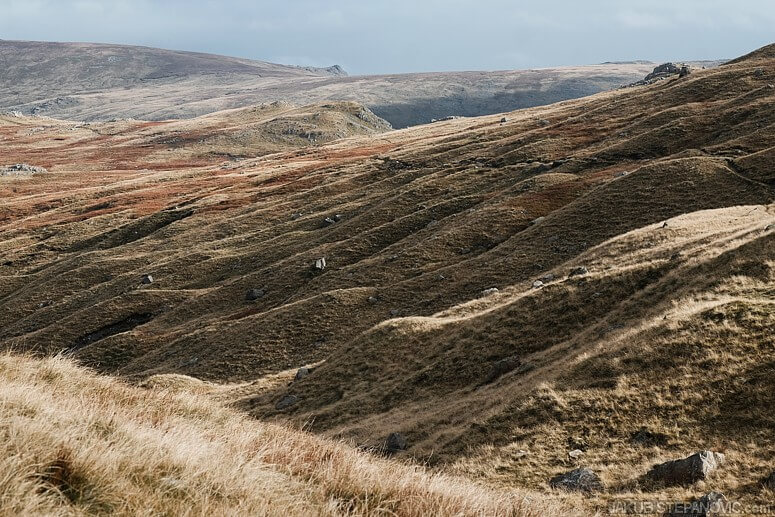 Just as in the morning, it lasted only for a short while. Soon, clouds started catching on us again. That; however, was just as stellar to watch. 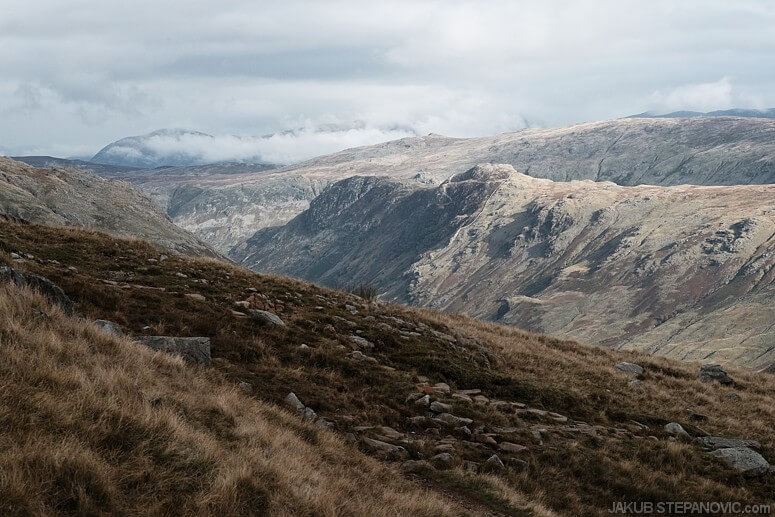 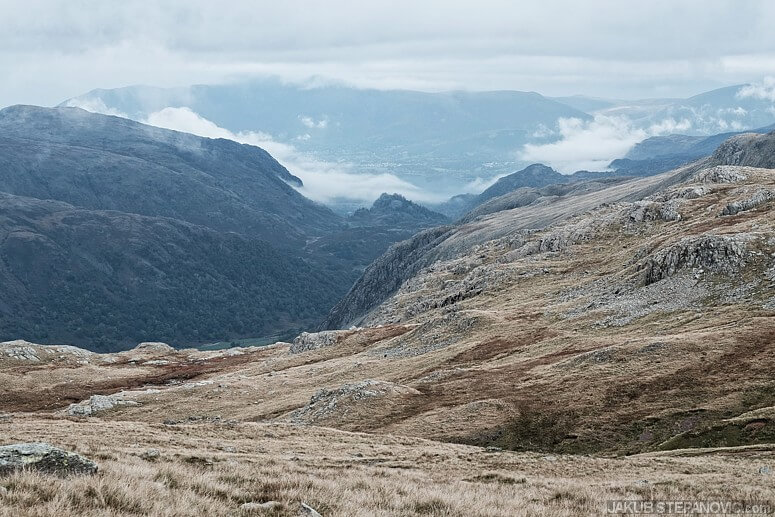 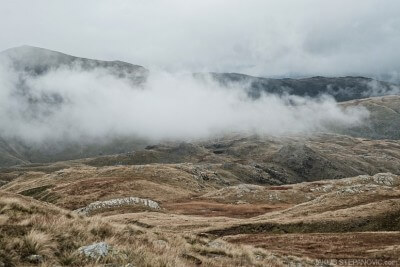 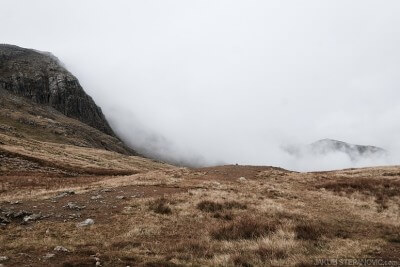 In a little bit, we were in a grey haze again and we hiked to the summit of the mighty Scafell Pike in a visibility no further than 30m (100ft). 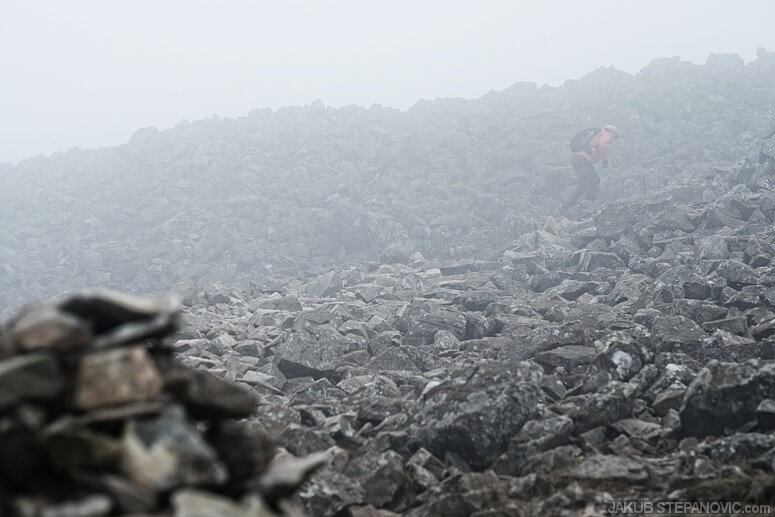 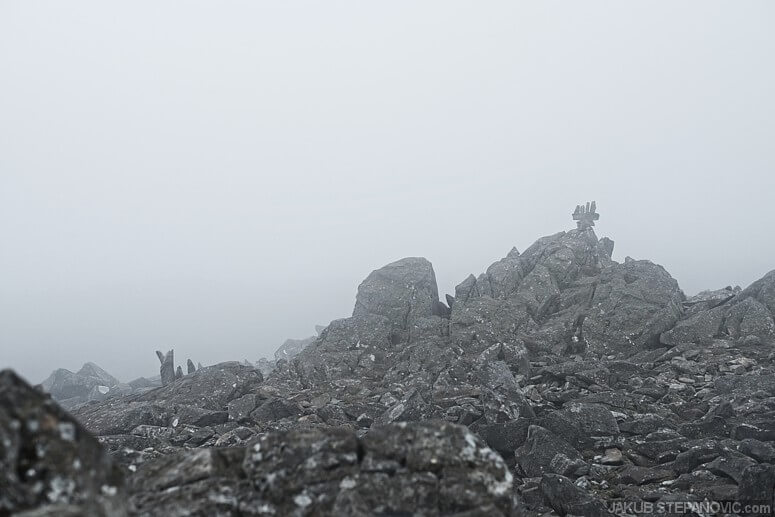 Given the status of the mountain, it is an obvious tourist destination. No matter the weather, there were always around 10-15 people on the top. That said, we checked a modest memorial marking the summit and left soon. Since the path we have chosen to go back is not the main way, we haven’t met many people later. Also, the fog started to thin. 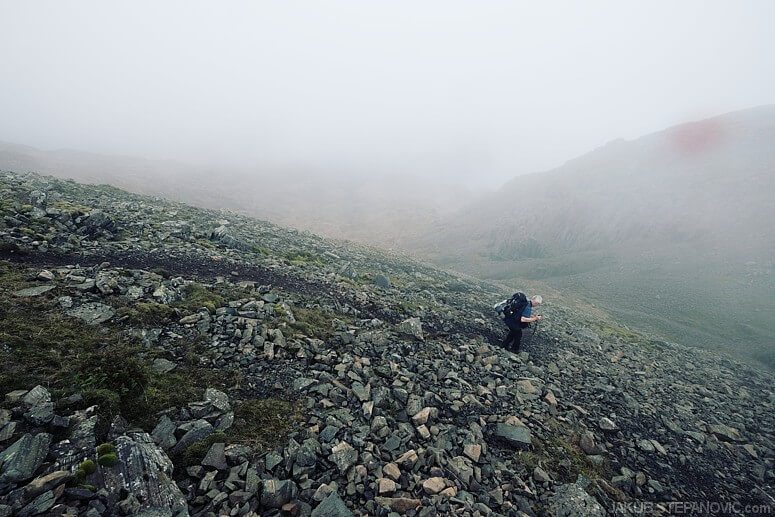 Suddenly, there were stunning views again. 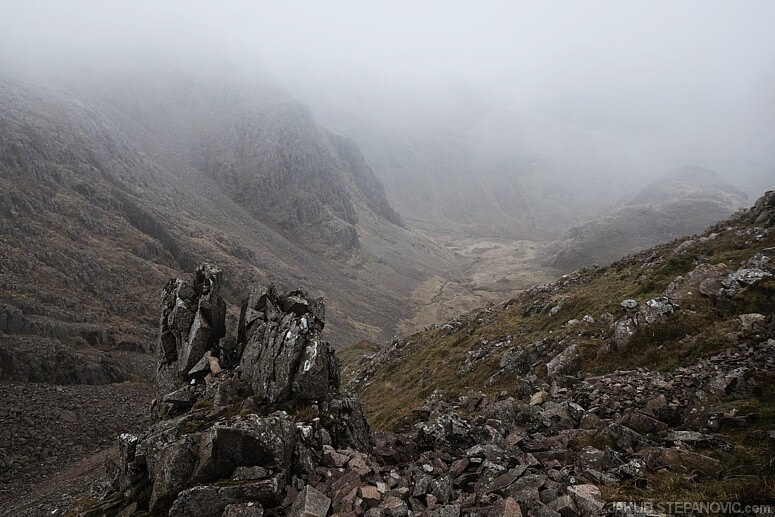 One would expect to see a sign to Mount Doom somewhere in here.. 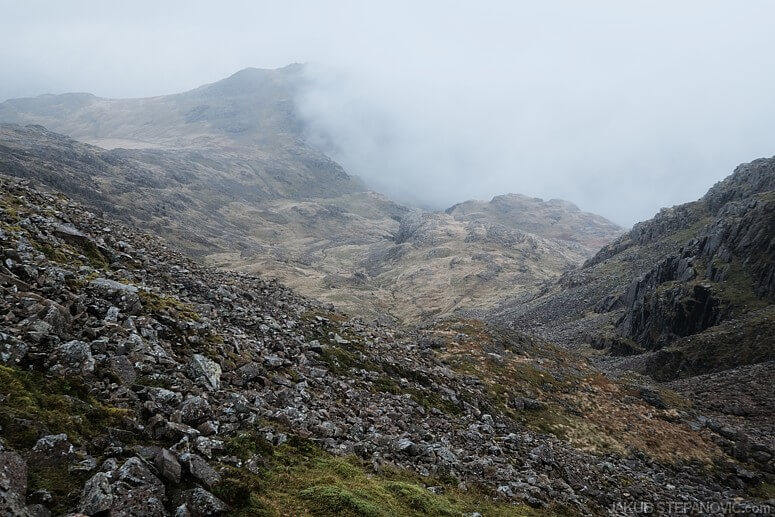 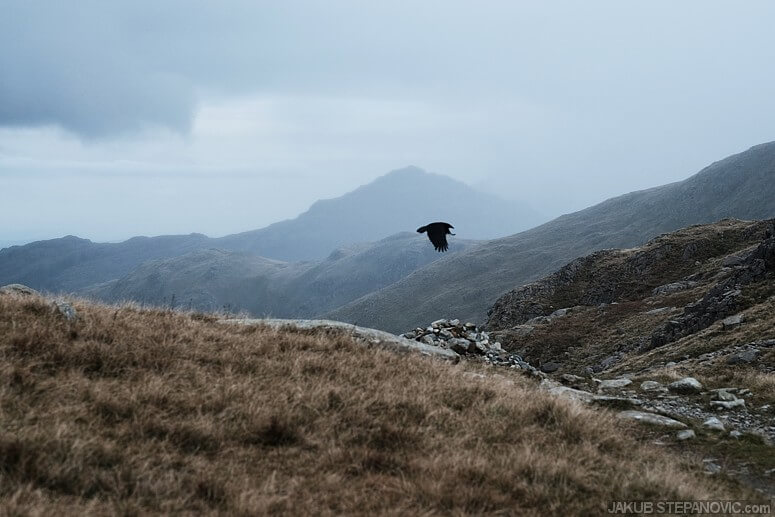 Before heading back to the valley, we checked out Rossett Pike, a nice diversion from the trail. 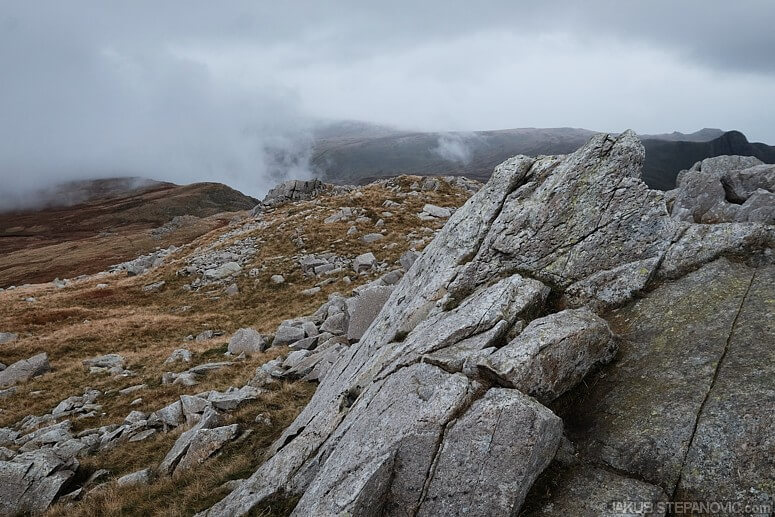 The Lake District is, according to the Internet, the wettest place in England, with up to 5000 mm (200in) of rainfall a year. That results in many springs all over. Because of this, I did all my hiking here with only a one-litre bottle, as I could refill it every few kilometers. It was the best tasting water I had in quite some time. 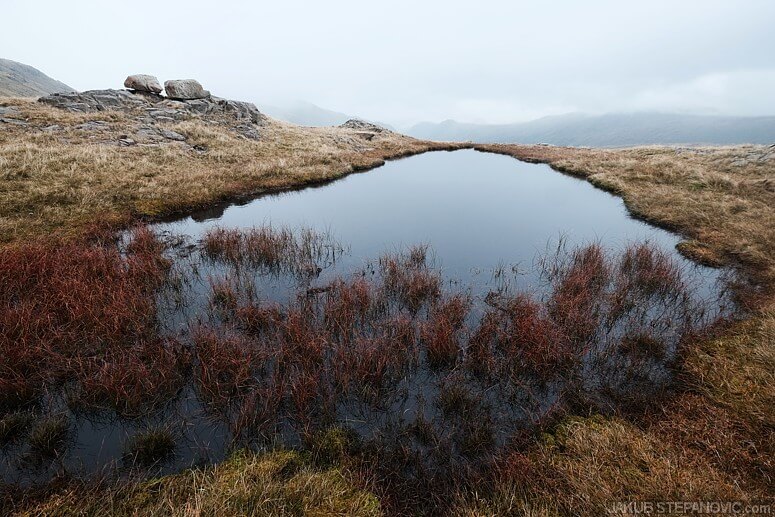 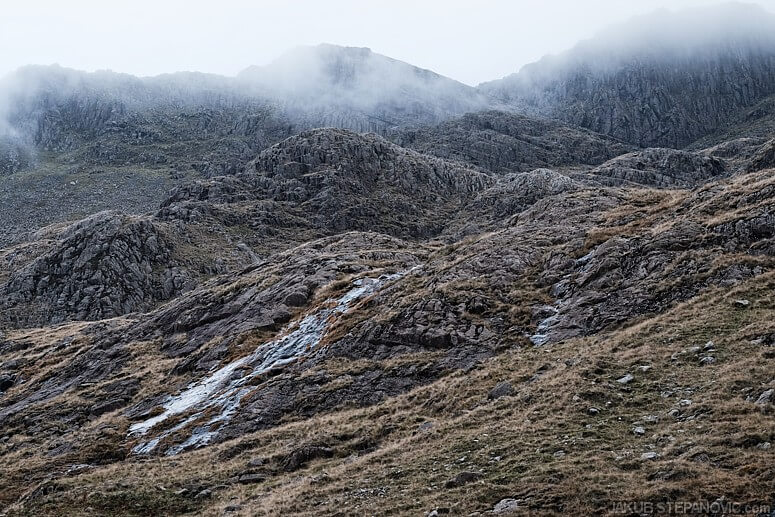 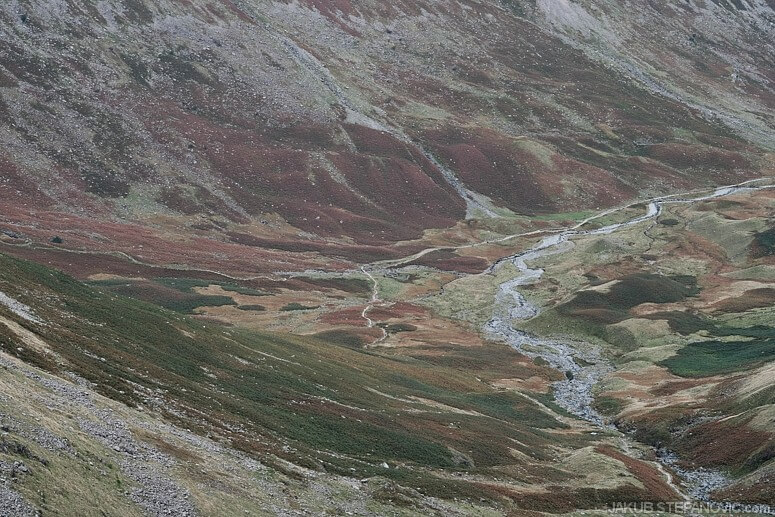 And not too long after, we were in civilization again. 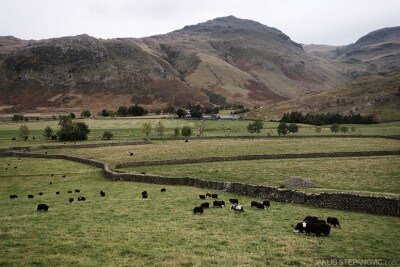 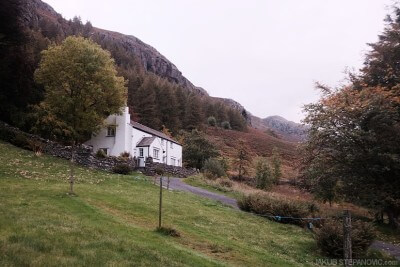 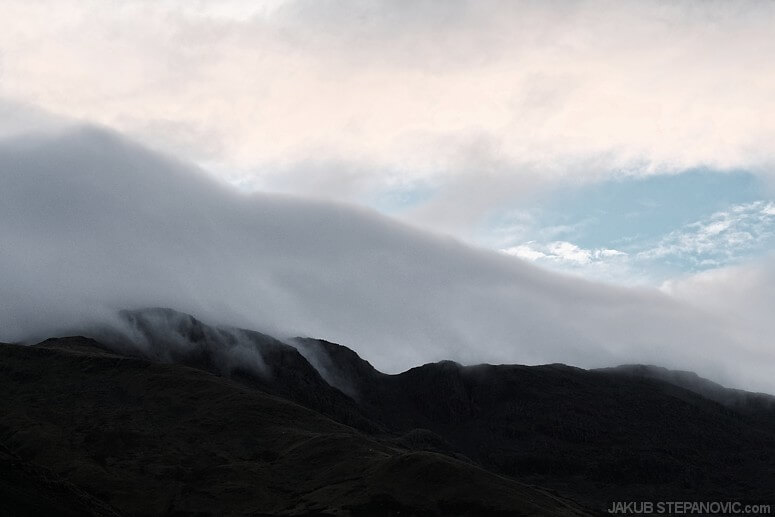 Click for the next, final day of the trip here. It was less touristy, but much more scenic.

I think this story and photos is a top ten, too. I particularly like the opening photo and one with water – you really caught a otherworldly mood with these. This is a place I’d like to visit. I’d also like to see Iceland, New Zealand, and Patagonia! I doubt I’ll ever go there, but maybe you can go and take photos to share!