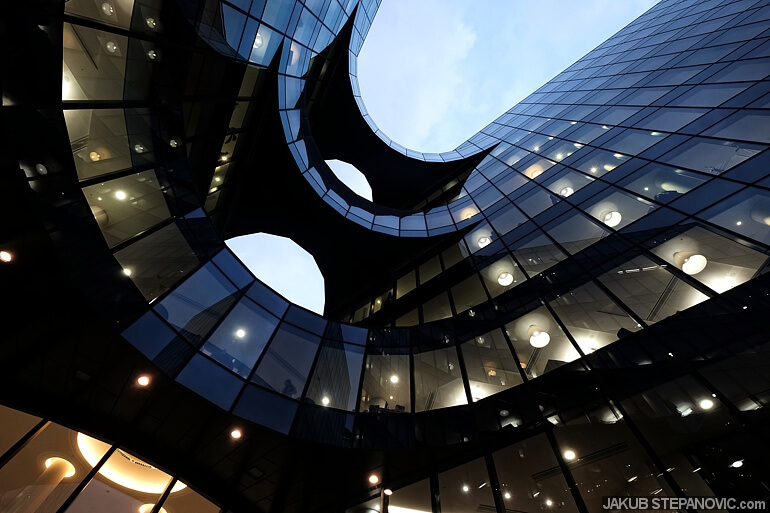 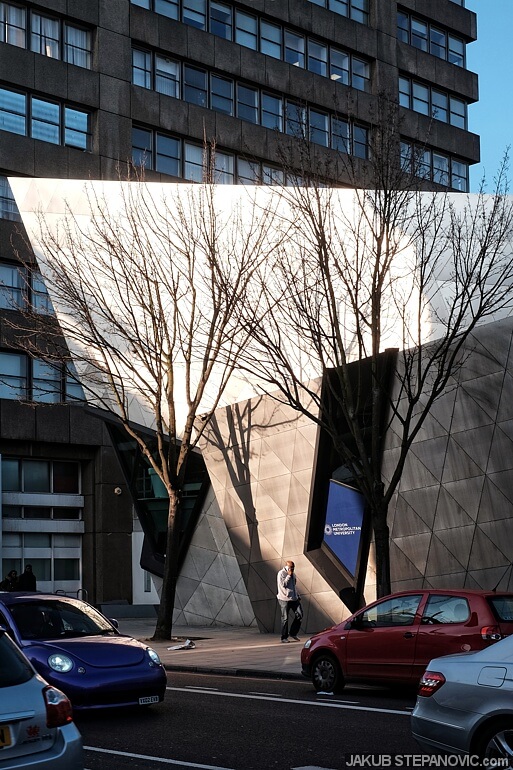 London is a great city to photograph, supplying me with plenty of topics. No way to be bored here. One of its features is that you can find some exciting buildings strewn all across the city. It is pretty common to find some by surprise in some neighbourhoods where one wouldn't expect it. Such as the other way when I was walking in Holloway, and the Graduate Centre of the London Metropolitan University appeared. This gave me an idea to focus another week of my London Walks on modern architecture. Let's start with residential structures and move to offices later.

A bunch of interesting housing can be find in the south part of the Borough of Islington.

some others in the area.. 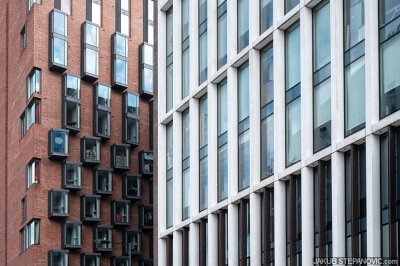 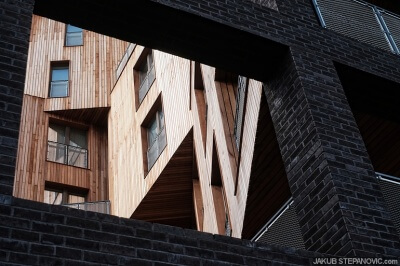 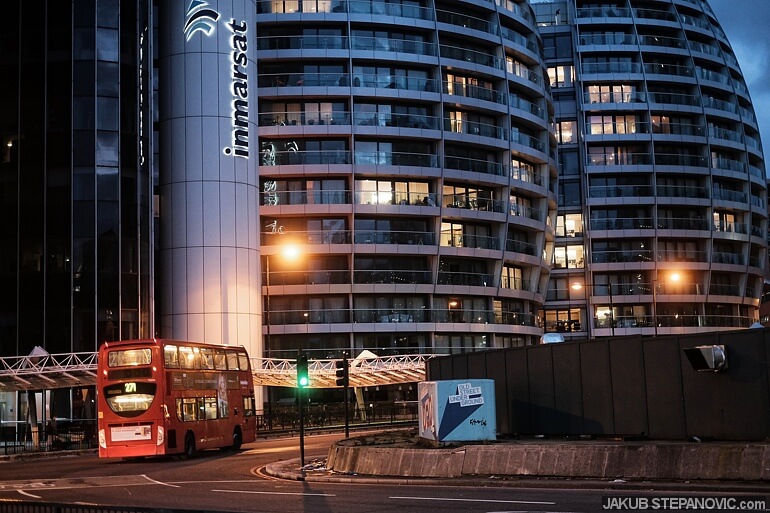 Interesting modern architecture doesn't have to be from the last decades. On the north tip of the City of London is the Barbican Complex, built between 1965 and 1976. 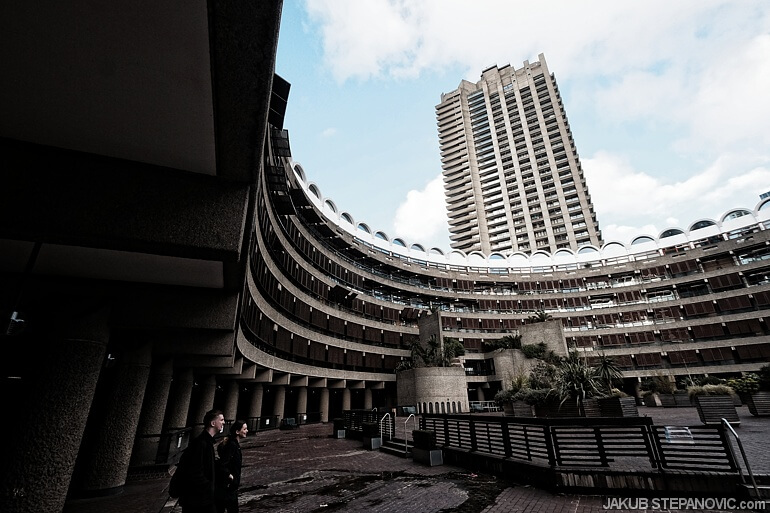 It's a big area of terrace blocks, shops, schools, playgrounds, and gardens, it contains the largest performing arts centre in Europe and three residential towers, each 123m (404ft) tall. They shared the status of the tallest residential building in London until 2007. Nowadays the post is held by St George Wharf, 181m (594ft) tall - but it won't be for long, as 200m+ projects are under construction already. But back to the Barbican: 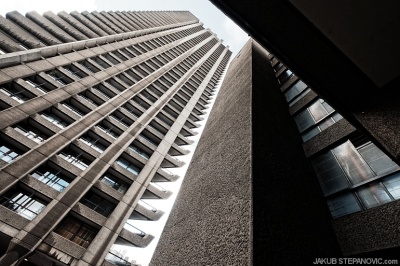 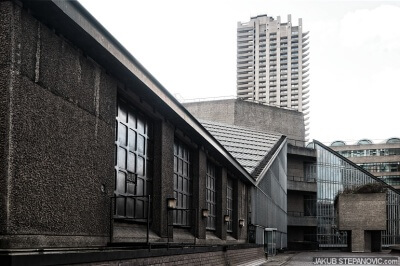 It's a notable example of brutalist architectural style. 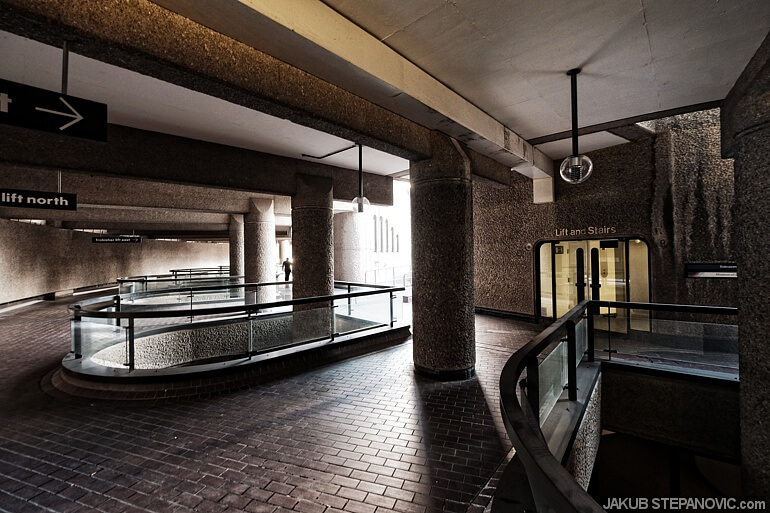 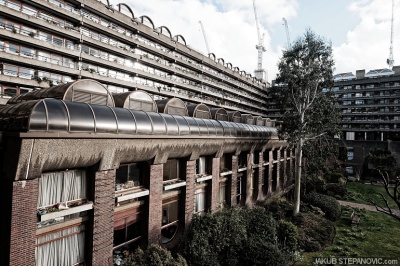 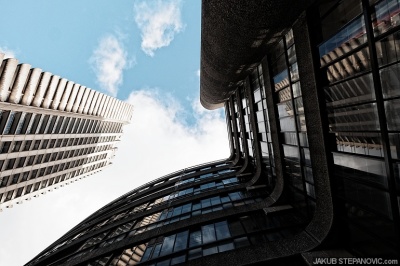 All of the examples above have a downside, though - their prices. Basically, in the whole downtown TFL zone 1 area, an unfurnished two-bedroom apt can be easily over $1000 per week. Since that's not entirely what most would call affordable, there's an enormous demand for housing that's placed further away. The most wanted spots are close to some public transportation hubs, so one can get to the centre quickly. Because of the popularity of these locations, there are also interesting developments to see.

This one is at the Elephant and Castle, south of the center. 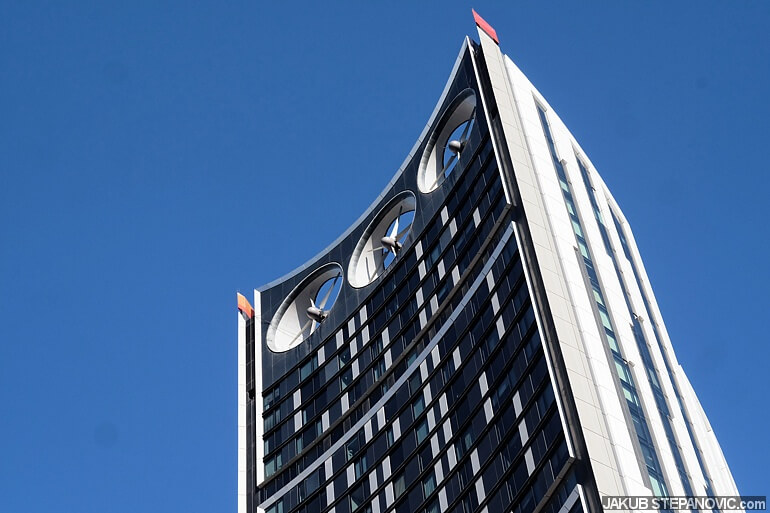 a 148m (486 ft) tall residential building called Strata SE1. Three wind turbines are incorporated into the structure, which contributes to occupants' energy bills being nearly a half lower than Britain's average. Cool!

..Or at Stratford. It used to be a part of Zone 3, but since 2016 it is included in zone two - making it the best value per money is at this moment. 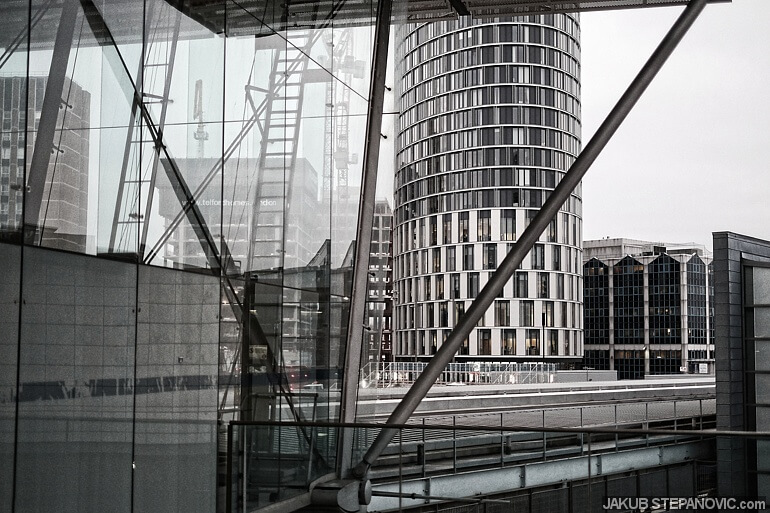 Unex Tower, as seen from the Stratford station.

Better prices start in zone two already, except for some premium locations, such as the Canary Wharf (I took the first of my London walks there). It used to be one of the largest docks in the world, but then the industry declined, and by 1980, the place became an abandoned ruin - until a group of people had an idea to convert this place into a major business district. 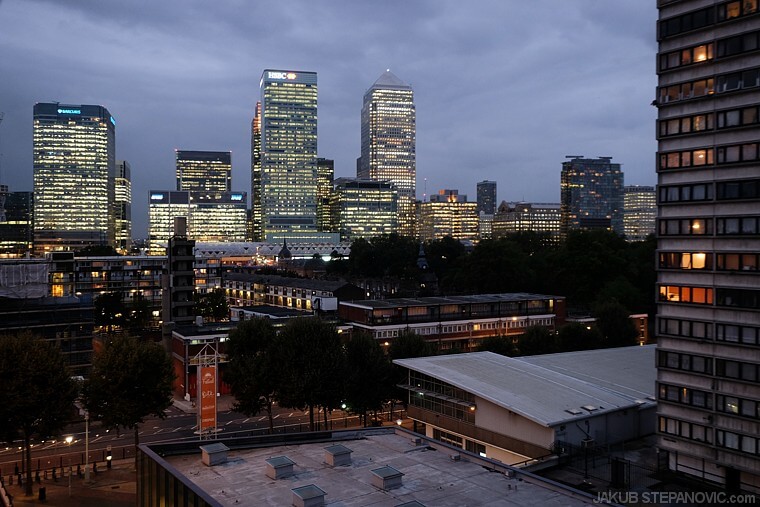 So was done as they built there the tallest skyscrapers in Britain (at that time). Tons of new office spaces made a demand for new housing soon, and it happened that the location became an upper market for living - as the new buildings maintained the place's highrise benchmark. The boom continues to this day, with many new structures being constructed all around. 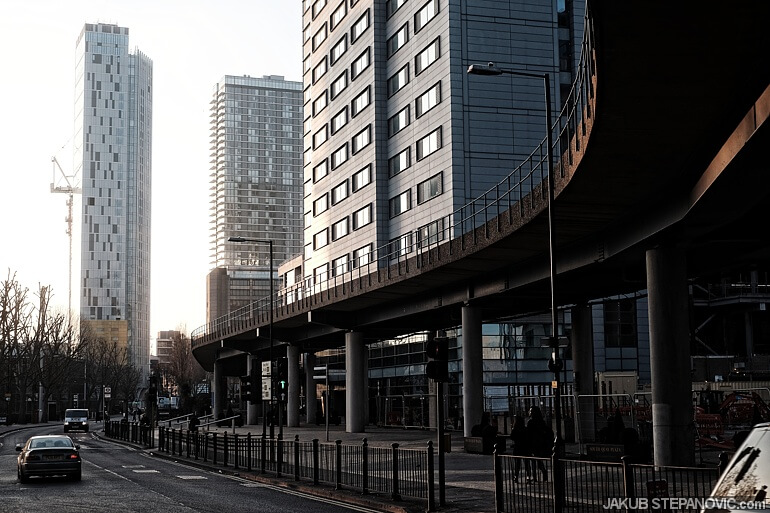 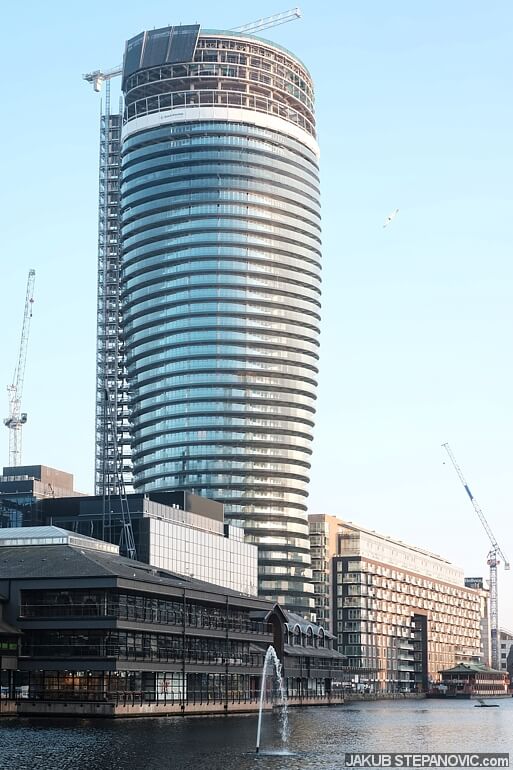 150m (492’) tall Baltimore Tower is to be completed later this year. All 45 floors of luxury flats are sold out already. It’s created by the same team that worked on some ultimate projects such as Dubai’s Burj Khalifa and Chicago’s Trump Tower. 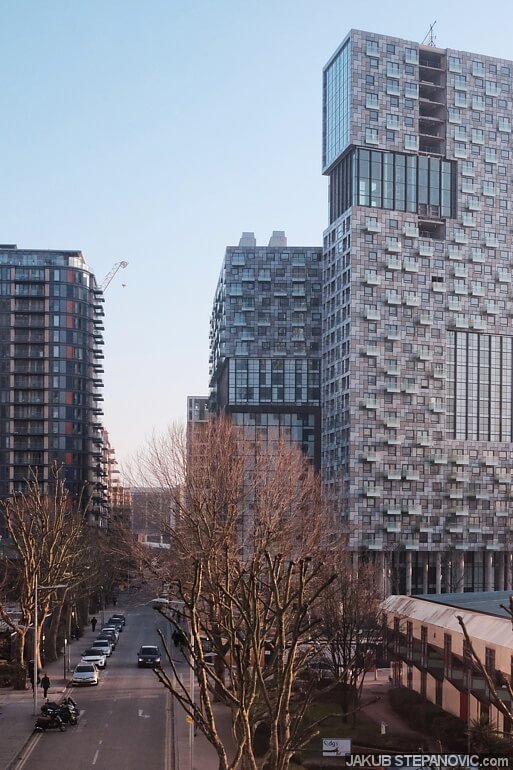 Speaking of the Canary Wharf (Click for some pics from there), let's move to some other cool offices, in another major business district: the City of London. 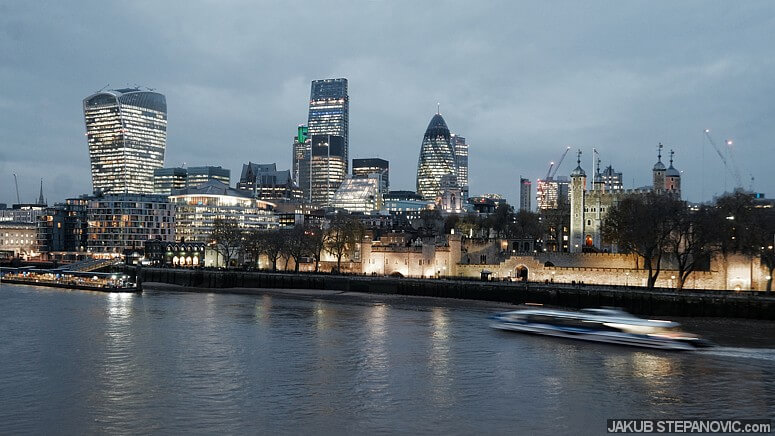 The location is an attractive mix of older buildings with hyper modern ones. 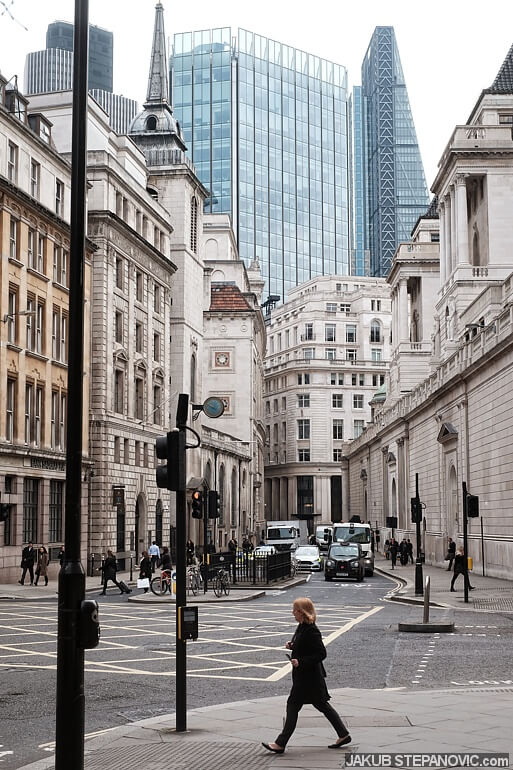 Every building is unique. 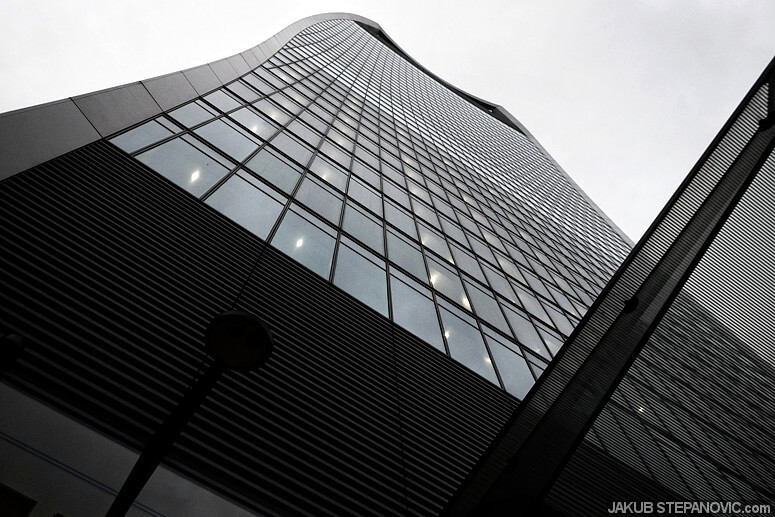 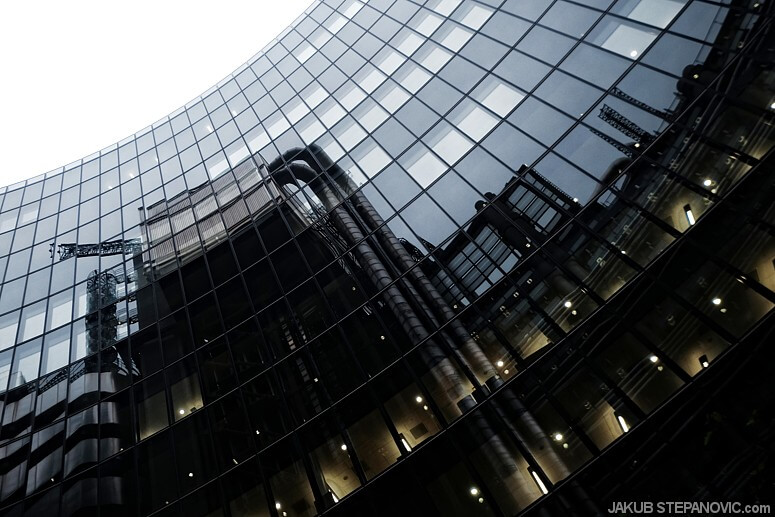 One Lime Street reflects in the Willis Building. Picture originally published in the "London Walks: The City II"

I've already dedicated previous walks to this district (see "The City" and "The City II") so let's move on. Across the river is another area with offices, including the famous city hall: 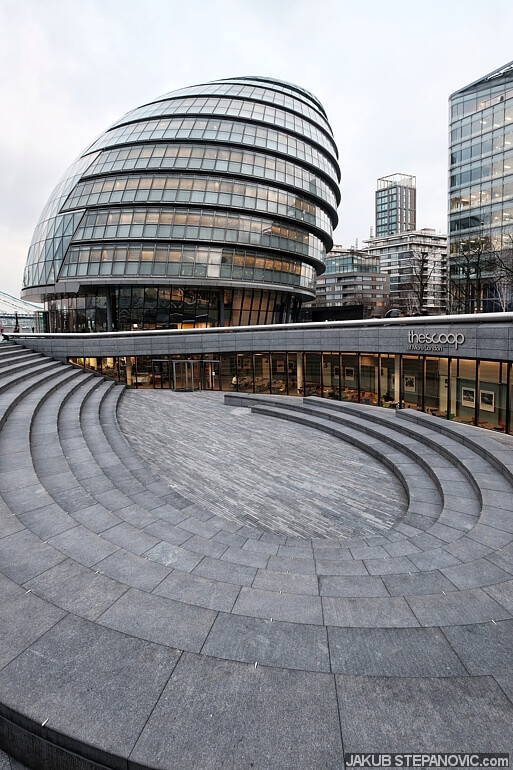 Designed by Norman Foster, built in 2002

Further west is another landmark, nothing smaller than the Shard. 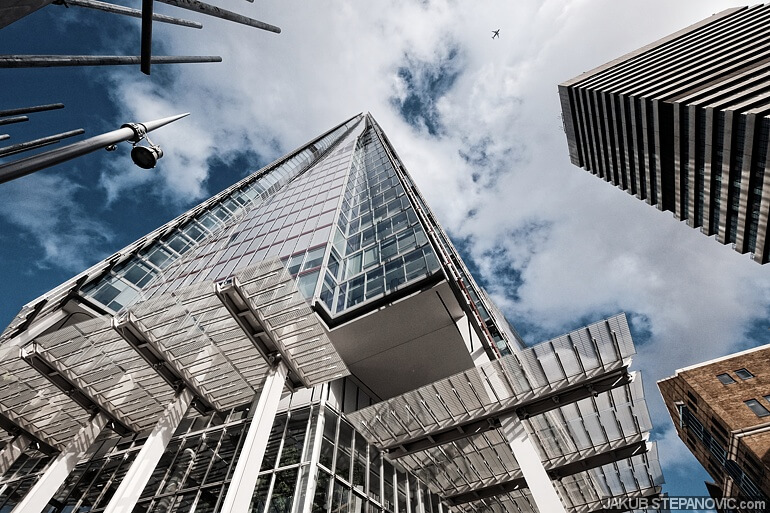 Note that building to the right - that's the Guy's Hospital. its design might not be as impressive, but it happens to be the tallest hospital building in the world (149m / 488'), which is quite cool. It's also the place where I spent yesterday's afternoon. Well, and that's where this post comes to a premature end. Long story short, I managed to tear up my knee. That said, there won't be another of "London Walks" (or any walks) in the near future.

Anyway. Which building is your favorite? Do you have a tip on some location I didn't include? Let me know in the comments and if you liked this post, check out more from London. Thanks for reading.