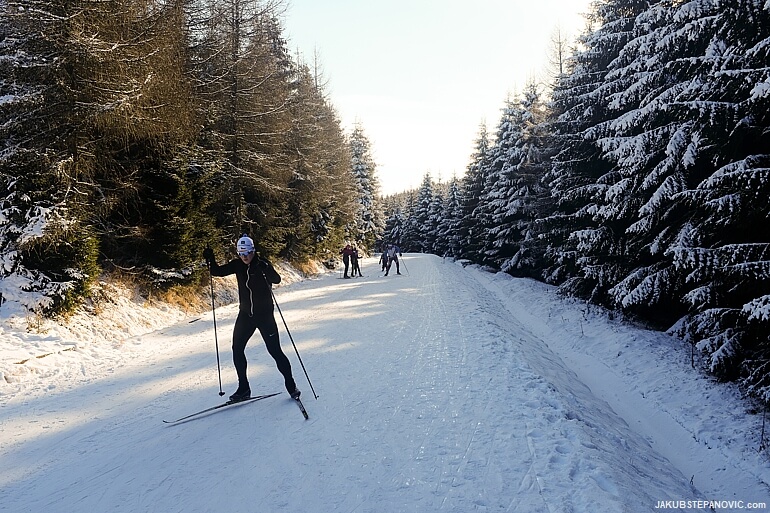 How I tried cross-country skiing.

"Cross-country skiing is amazing, it is my favourite sport," a few of my friends recently claimed. I wasn't convinced at first — I tried it once or twice when I was ten or so, and I remember that I wasn't sharing any of that enthusiasm. But these optimistic lines coming from multiple sources began to attract me. "I knew nothing back then; surely, there must be something on it," I started warming up to the idea of giving it a go, and after hearing a few other wonderful cross-country stories, I was sold. Let's brush up on this thing!

And so, when my friends headed for a spin up to the Jizera Mountains, a range with a reputation of an xc skiing paradise, I joined. Sadly, a meltdown struck the area since I was there the last time, and the lowlands looked like in spring. But the friends reassured me the ridge still has some snow. They were joyful, and so was I. Sure enough, from some 700 m of elevation, the landscapes turned white, and in no time, we parked and started gearing up. 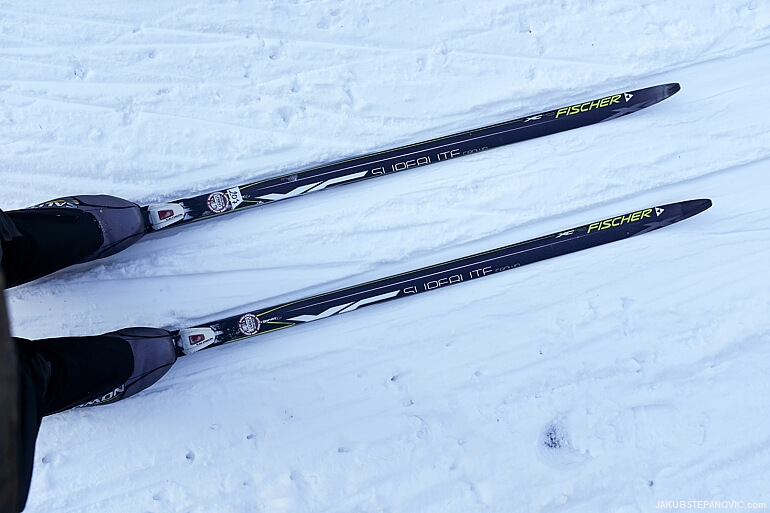 It was here when my cheerfulness started to blend with doubt. "What am I actually doing? I have no clue!" Clipping to the skis was a piece of cake, but then what? I looked around and tried to repeat what others did, but it wasn't very fruitful. "Use the poles, right leg forward, poles again, then left.." my mates tried to help. I had to entirely focus on every movement I did to move forward. Whenever I thought of something else, my skis turned elsewhere, and I nearly fell — something I dreaded before the trip. I even asked whether I should bring my MTB pads, but apparently, one falls differently during skiing, so I left them at home. 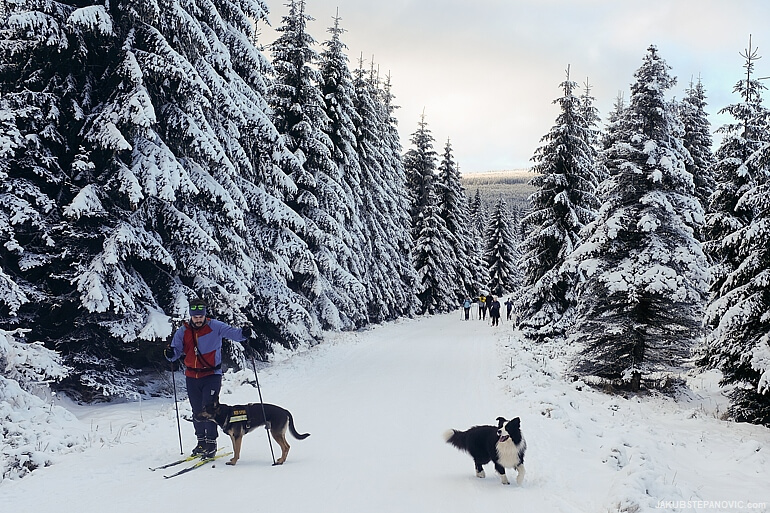 Others were moving forward as if gravity laws worked differently to them. My ego tried to soothe me that they must've had much better skis than my rental kit. But there's no chance; I knew that even a racing gear would be no good; it was my skillset that was useless.

I worked out that the coordination needs to became automatic before I can truly enjoy it. It reminded me of the times I started to learn how to drive a manual. When I drove alone, I was more focused and managed with ease, but when I went with someone, it was easier to get distracted, and my engine stalled from time to time. Fast forward, I drove around the Scottish Highlands in manual minibuses full of people with no issue. Experience and practice make all the difference! But in xc skiing, I lacked both. "One, two, one, two," I was saying to myself while slowly moving ahead. "Heck no, this is much harder than driving," I continued with my analogy. Think about how many people caused an accident because they dozed behind the steering wheel. But have you ever heard about anyone who fell asleep and crashed while xc skiing? I didn't either. Because unlike driving, xc skiing is hard work! 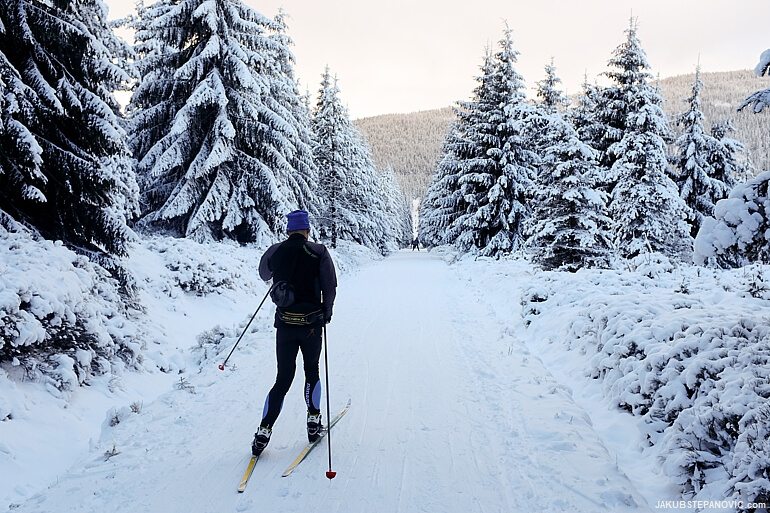 The physical effort linked with the sport isn't a bad thing, though. As a result, everyone around me looked like from the cover of a fitness magazine. And it wasn't just the individuals in a great shape that was lovely to see; it was also the beauty of their movement. Poetry in motion! I thought it would be similar to running, but it is much smoother. In that perspective, it's more like swimming, and I fancy that better. But like I saw the elegance in their effort, I realised that they must look at me, who had a style like I got a stroke after every move. "Poor them!" I thought and continued to focus. "One, two, one, two.."

Some five km in, and I started to get the basics; therefore, I could finally extend my focus on the other things. Aha, it is actually gorgeous to be outside today! 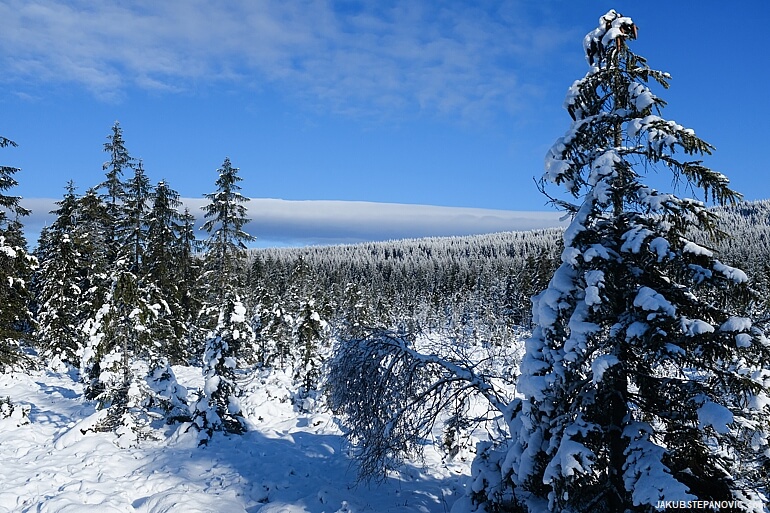 Moreover, the road started going gently downhill, so for once, I moved faster than tectonic plates, which was another plus. At 7 km, we had a snack. As I was short of water, sugar, and breath, it was godsent.

Once refuelled, everything felt brighter. The movement finally became somewhat automatic, and what was even better, I was able to keep up with my friends without them having to wait on every corner. Wonders! We opted to return by a different path, narrower, with less traffic. It was splendid, and I felt that excitement from the stories folks told me. I was also chuffed that I didn't fall, and astonished by the new perspectives of a sport that I tried nearly 20 years ago. 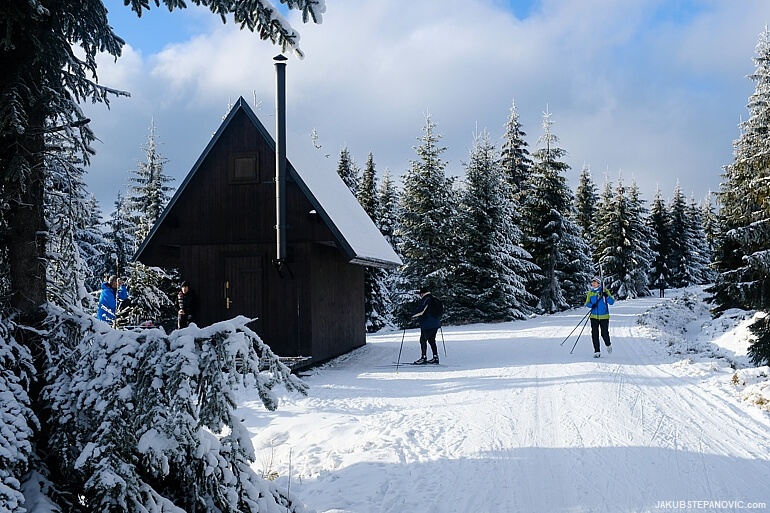 13km in, we reached a junction and took another break. It was nice to refresh before the last 5km to go; however, my smile faded away when my friend pointed at a steep, narrow downhill path called "Equestrian Way," as if that is the direction to follow. Right then, a group of skiers came up that way, and a guy from them uttered: "What a terrible hill this was!" ~ "Ah, I get it; it's a joke..." I thought. But nope, my friends were serious. "Go first," they said. "Okay, maybe it is not that bad. They know that I am a beginner, after all." I assessed the situation and set off. "Maybe this is the glorified descending enjoyment everyone talked about?"

The trail ahead combined two of my worries: it was steep and had curves. So far, our path was pretty much straight — easy. But the turns were a challenge for me, and here, I had to tackle them at a higher speed than my liking. Somehow, I was making my way down when the trail revealed another obstacle: channel drainage, which formed a good-sized hump. "Aaaah!" The second drainage came in a moment and another right after, while my speed steadily increased. I didn't manage to straighten up and flew into the fourth hump as if I changed the discipline for ski jumps. Hop! "Come on, I wasn't thinking that I could pass the trip without falling, was I? It had to come!" I thought while making a flip in the air. Harsh landing got followed by an avalanche-like tumble, and my view switched between the earth and the sky until it merged into blurred white. After I stopped, I wiped my eyes from the snow, and saw that I am not on a bridge to heaven; I simply ended in the sunshine. 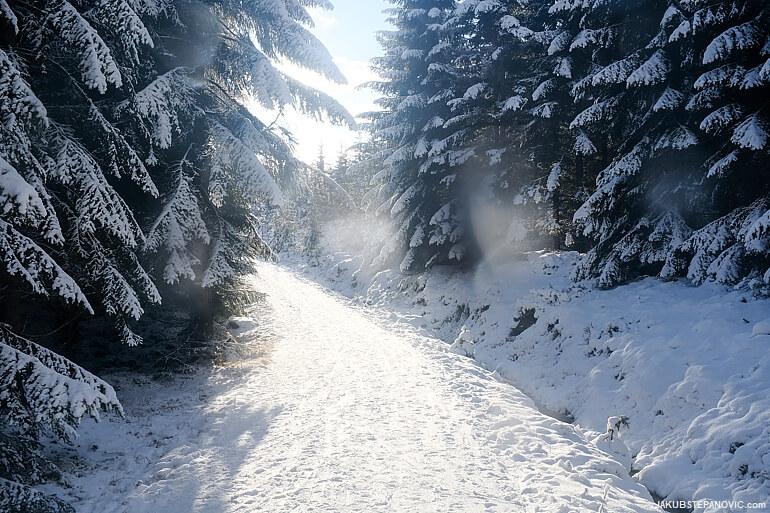 "Not only the pads, I should've brought a full-face helmet!" My hip and elbow were bruised, but I could move, and I didn't break the skis, nor the poles. That could change, though, as I was all over the trail width, and others were incoming. The last thing I wanted was somebody crashing into me while laying on the ground, so with a loud sigh, I stood up. When my friend came, it looked like I am just waiting. She said that it shouldn't be this steep anymore and that I am doing well. "Only if you'd know..." I thought and set forth again. Fair, it wasn't as steep, and the drainages were no longer like a deer trap. But with decreasing elevation, the snow depth got worse, and from time to time, small gravel stones surfaced through the snow on the road. "Exactly what I needed, a slalom round!" Out of the blue, there was a gravel patch too large for me to avoid. "Ah, that will be like skiing on a cheese grater," I was concerned about them poor skis. Little did I know that besides engraving a new pattern to the skis' base, the gravel will bring them to an instant full stop. My 6'6" body had plenty of momentum, so when the skis came to rest on a dime, I continued in the direction of travel. Here we go again. Except, I wasn't falling on the snow this time, no. Smashing right down served an intimate encounter with the gravel. "Oh, glorious snow, you white airbag, where are you when one needs you?" At least I didn't poke my eyes out on those pointy skis' tips, though it was a close call. The ground revealed that the meltdown wasn't the reason for the exposed rocky field. Instead, it appeared as if someone ploughed it here with their face before me. Live and learn, what a sublime sport it is!

The Equestrian Way (or the slope of doom, as I call it) soon finished, and I reunited with my companion, to whom I confessed that my descent wasn't as graceful as they thought. It was still over three km to the car park — long three km, very long. At least, it went around a pretty water reservoir, which gave a plaster on my tired and sore state. 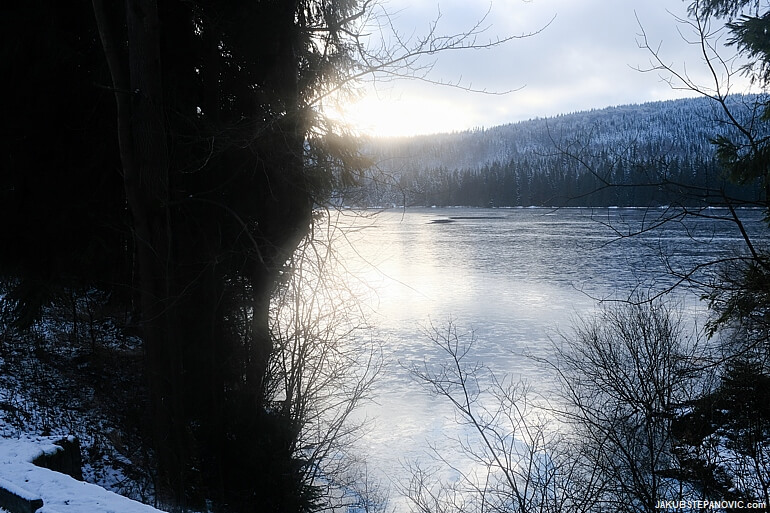 Another relief came when we reached the finish, as I took the skis off. Such lightness! I felt like I lost 10 kg, and I was thankful that the trip is over. However, as I recovered from my rookie mistakes over the next few days, I concluded that while cross-country skiing might not be love at first sight, there is certainly plenty to like. I am keen for another go.