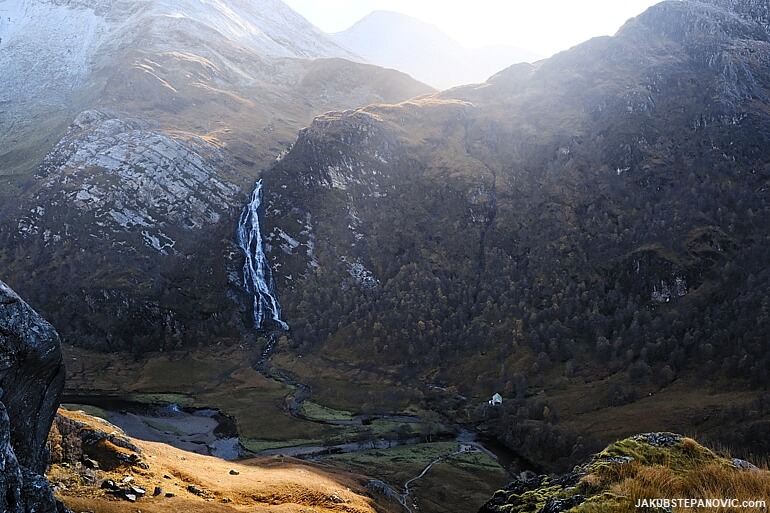 Visiting the Glen Nevis and some stunning mountains nearby.

When I moved to Scotland a few years ago, I created a good-sized map of local points of interest. One of the first places I added was the glen just below the southern slope of the UK's tallest mountain, and I was lucky to finally checkmark that at the beginning of this winter. I went there with my university's Rucksack Club, a convenient way to reach the place while spending a weekend with like-minded people. A win-win.

As it's been a pattern of mine over the last years, I started packing only about an hour prior to the departure. Usually, it's a smooth process, after which I end up with some lightweight backpack. Not today. I couldn't believe the bulk I had. 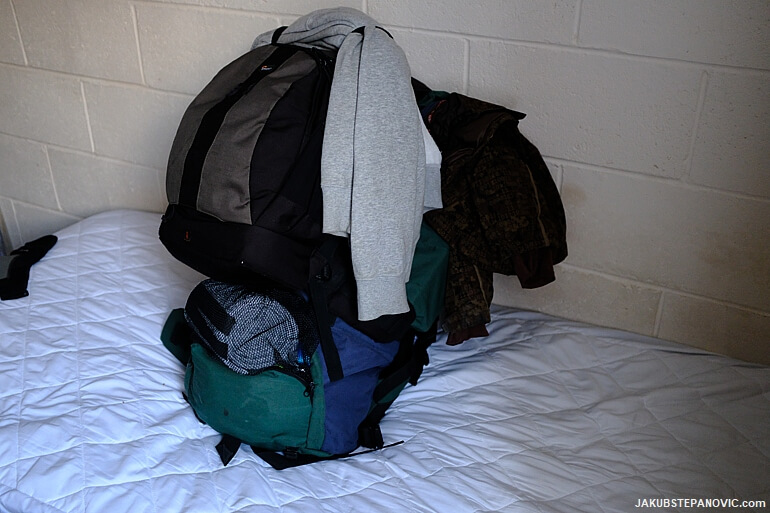 Two backpacks strapped together and a jacket on the top of it. The most of space took my winter sleeping bag - I'm 6'6"; therefore, it is massive. But I also packed ~ 40m /130ft of webbing. I'll get to that later.

It was already pitch dark when we reached the parking lot at the entry to the glen. The air was fresh, bringing the scent of soaked soil and snow. It was the first time I smelled that combo this winter, which brought a strong dose of excitement.

Our accommodation for the following two nights, the Steall Hut, is roughly a mile from the parking lot. And so, the last leg of the journey was on foot. We fired up our torches, and the access trail welcomed us with a sign "DANGER OF DEATH." But, since it is at least three feet wide and well maintained, no issues raised. The clouds got blown away, and the moon was bright enough to navigate the trail even without the torch. I ended being antisocial and walked a bit further from the rest, as listening to the symphony of shivering leaves and a cascading river nearby was too good to break with a chatter. The valley performed one banger song after another, and I was a happy human being.

At one point, the noise of the falling water started to be more and more prominent, and we knew we were close. The thing is, the Steall Hut is situated just underneath an enchanting waterfall of the same name: Steall Falls — they are the main reason for the glen's fame. To get into the hut, one needs to cross a bridge over the river. Well, bridge... two linked steel wires for your feet, and another two for you to hold. A feature I was looking forward to. 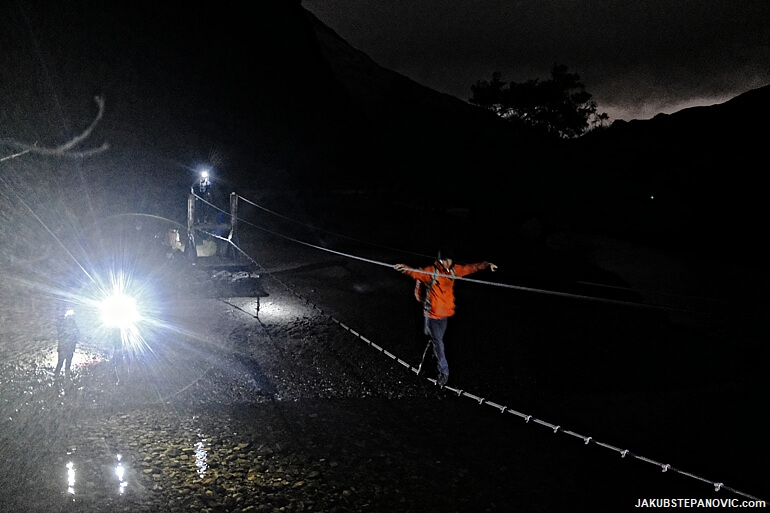 This pic (and all the others in this post) was taken handheld on a compact camera. What a great age we live in!

Once in the hut, food, chat, sleep. Simple. The following day, I woke up eager for the day. And as I went outside to brush my teeth, the expectations turned into reality. 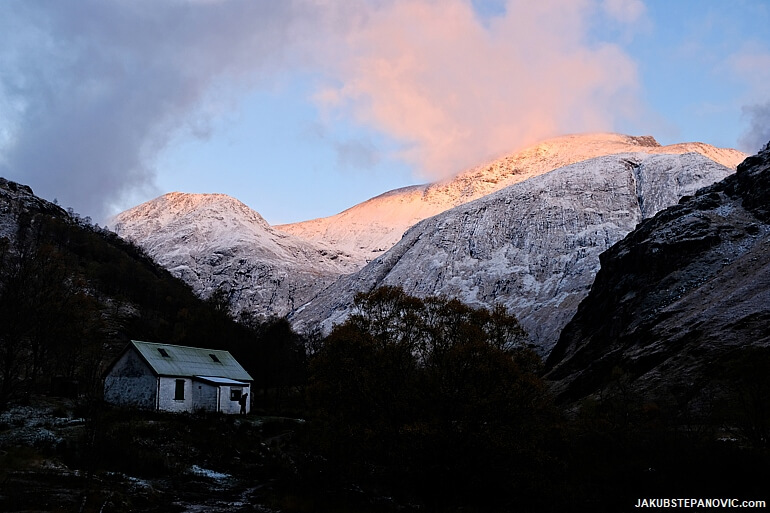 Woohoo, talking about some views from the bathroom! yeah, I totally brought my camera to my morning hygiene. "One of these people..."

The daylight exposed the glen, but also the Steall Falls into their full beauty. 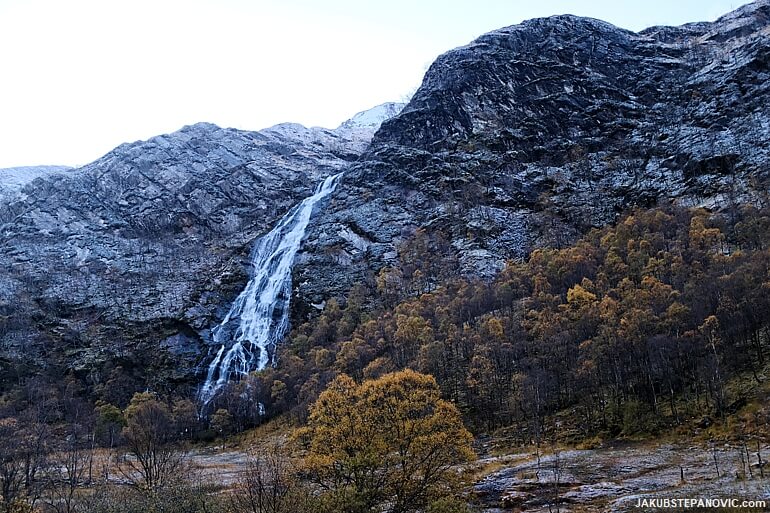 It is actually the second tallest waterfall in Scotland, with the height of an impressive 120 m / some 390ft.

The plan for the day was to hike the Ring of Steall, around 20Km / 12mi long loop that goes up the southern ridge and scales four Munros (mountains over 3,000ft tall), before descending back to the glen. When others got up, I asked who else was keen about the hike, and a few said so. However, the procedure of getting ready was taking long, and the light outside was too good just to sit and do nothing. So I mentioned that I'd wait on the trailhead, and I climbed the slope near the waterfall to get some vistas. 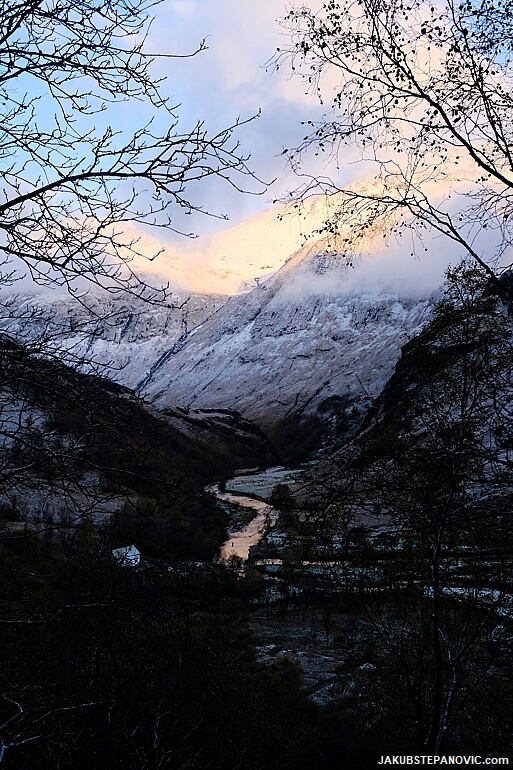 Once reunited, I locked the GPS, and we headed to the ridge. 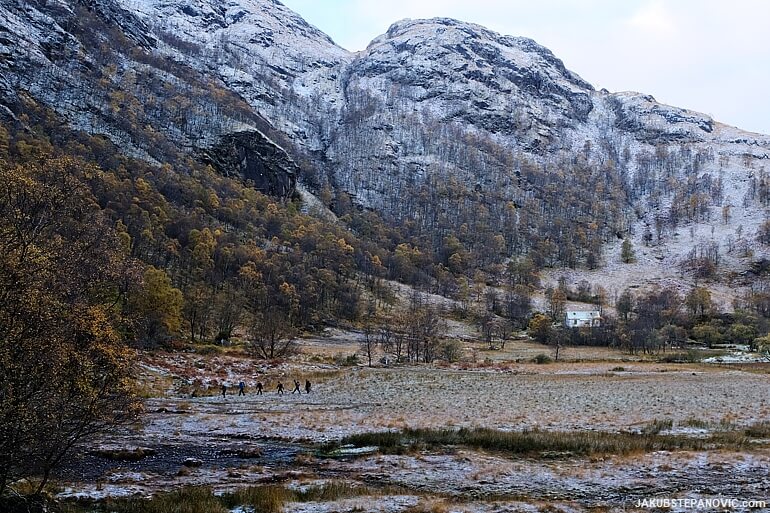 It didn't take that long of the ascent, and we entered a white kingdom. 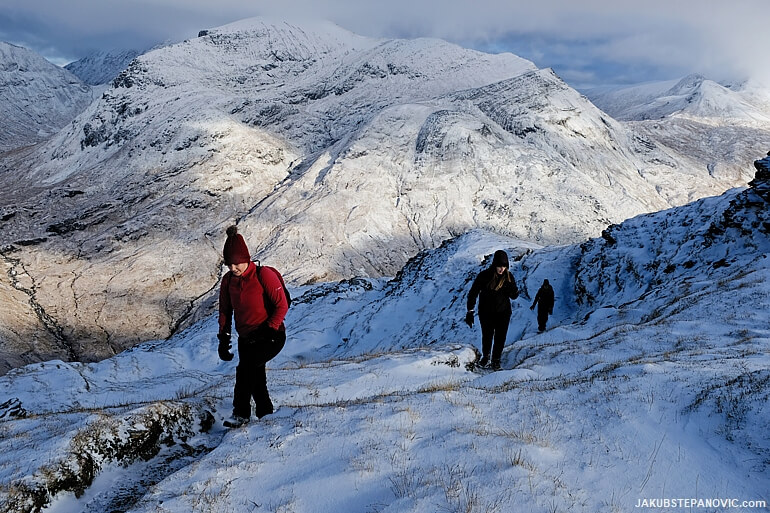 I wondered whether the exposed ridge would be swiped by wind, but nope. Nowhere as bad as it could have been. The sun was stronger than the wind, which isn't a usual pattern here. And speaking of the ridge being exposed, it made some sections of the trail rather fun. It's not challenging, but it requires attention to the line choice and balance. 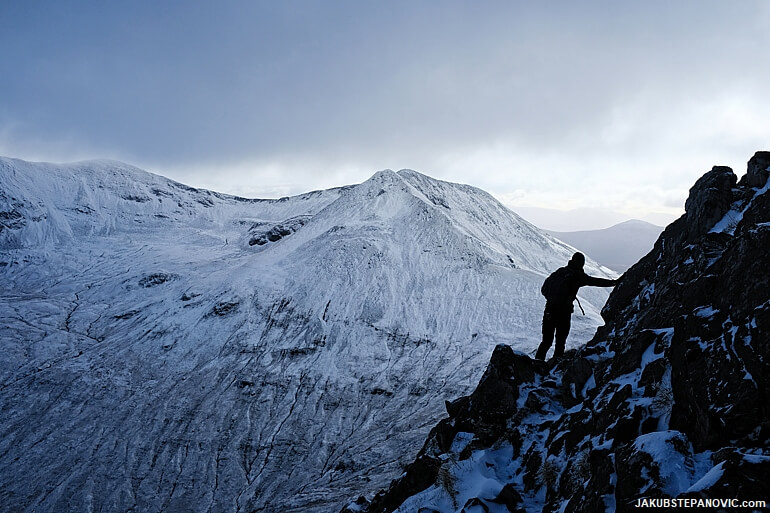 Meanwhile, clouds were rolling in and out, creating a colourful theatre. 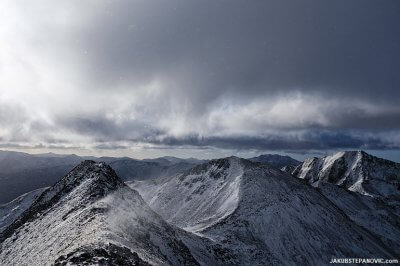 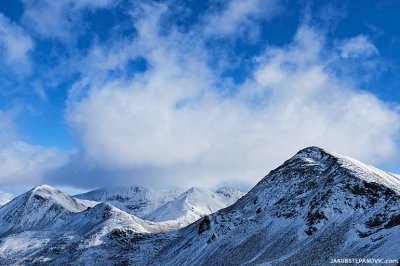 Giving views on some of the most remote bits of the Highlands.. 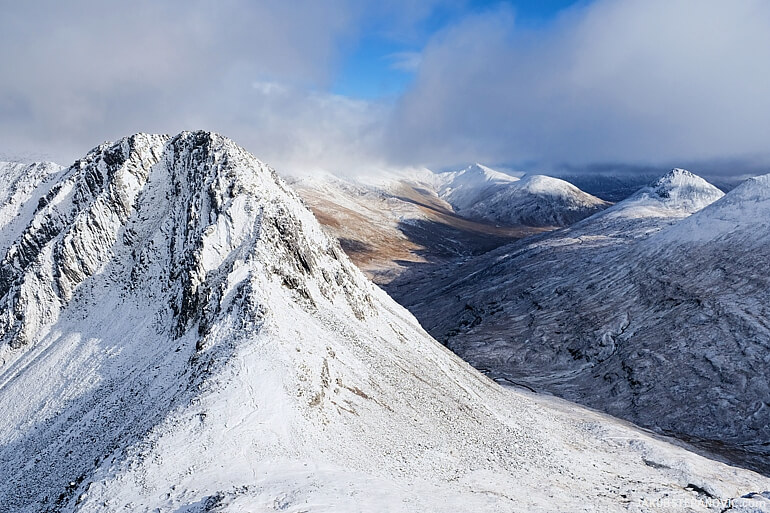 The peak of that massive ridge on the left is An Gearanach - one of the mountains we climbed that day. 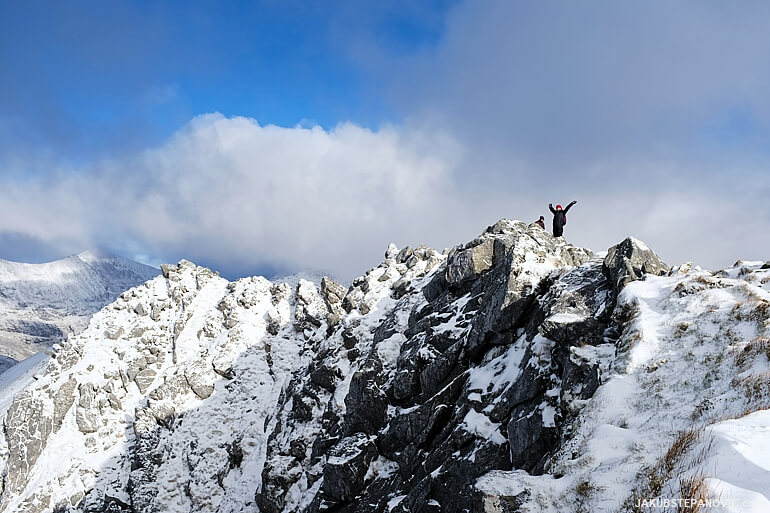 Getting further, we found a rock ledge to shelter us from the fresh breeze, where we made a lunch stop. Then we established how's everyone doing and opted to skip the last mountain to take a detour by using a longer route, but without the good-sized elevation difference that would need to be scaled if we'd stay on track. 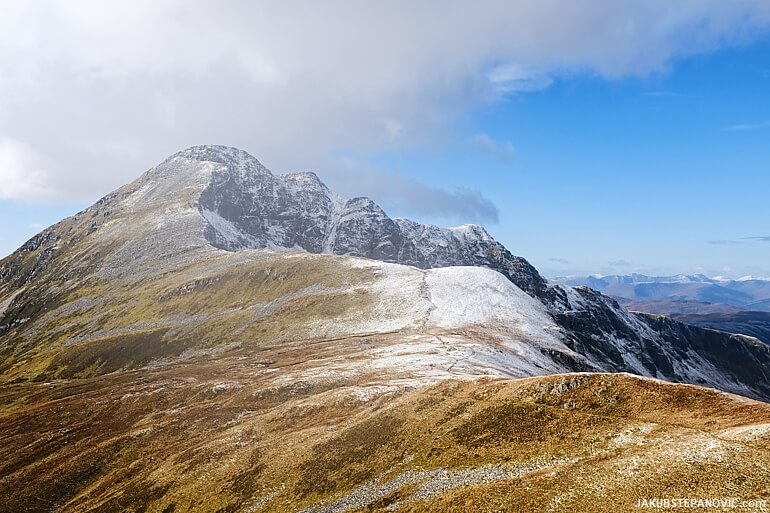 After descending to a saddle nearby, we passed a small mountain lake, from which we followed a stream that took us back to the valley. 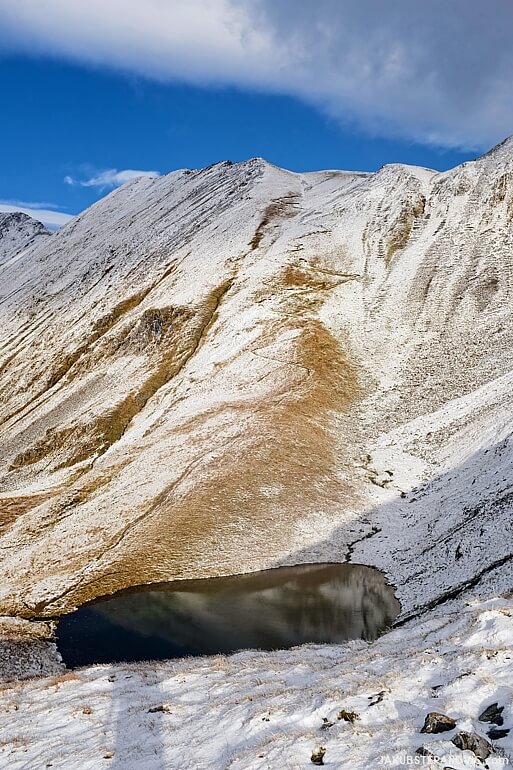 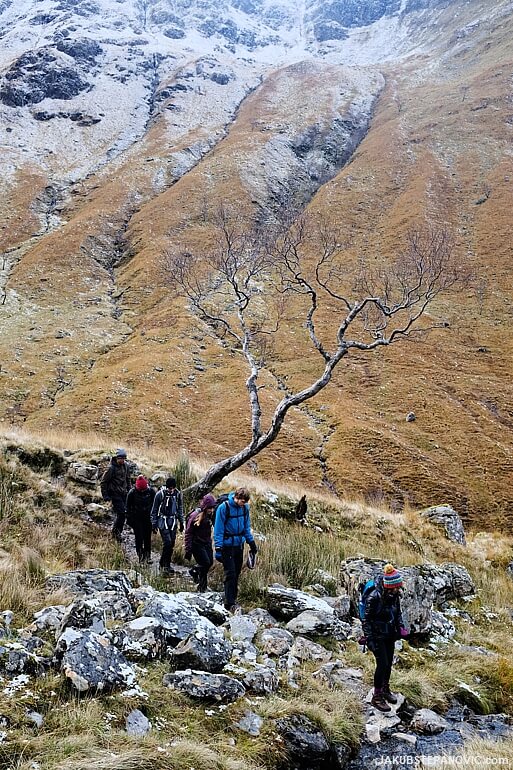 In the valley, the stream we've been following joins the Water of Nevis, the same river that forms the Steall Falls further upstream. Almost at the end of the hike, we still had some sweet bits ahead of us - as the river has a few other neat waterfalls on the way. 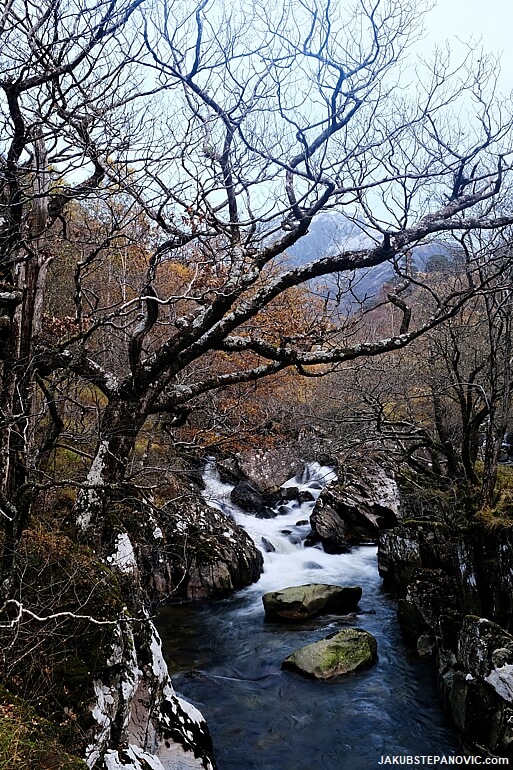 Finally; to return to the hut, we went by the same path that we used yesterday. But since we still had some daylight left, it felt like a different route. In the hut, we had dinner together, during which we exchanged experiences from our hike with others who had a different program, good times.

On the last day, I planned to stay near the hut and make some use of that webbing I carried. But before that, I went on the opposite side of the glen than yesterday's hike. My idea was just to have a quick look at how the falls look from there and go back. But you know that "I'll just check it out" statement... Maybe it's just me, but nearly every time I think this to myself, I end up deep down the rabbit hole. So before I knew it, I was gaining some elevation towards the cliffs of Ben Nevis. 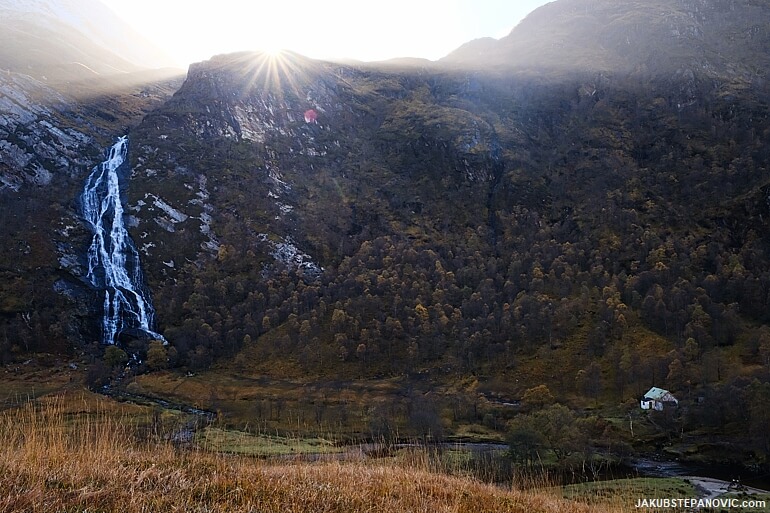 The outlooks were top, and with every step, there was always another horizon waiting further up.

There were some boggy sections, and in one of those, I passed a skeleton of some sheep, which got probably stuck here. Memento mori; I thought, but climbed a bit more. I took a break on one rock shelf when I spotted a massive bird of prey flying above me. I read that eagles can be seen in the area, but it's hard to say if that's what it was. All I know is, the size of that thing was respectable. It was coasting in circles and suddenly dashed straight down towards a piece of grass not too far away. Bam! in no time, it was flying back up and away while holding something in its claws. How cool! 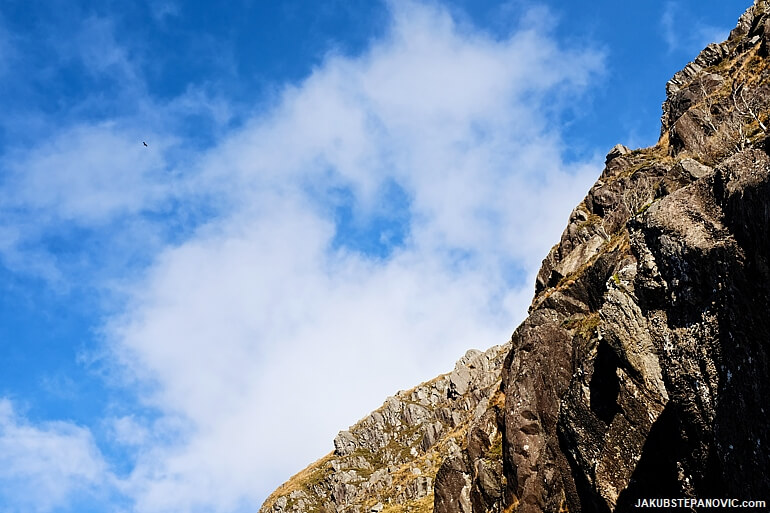 That dot in the upper left quarter. A wide lens ain't too good for birding, but no bother. The memory's there.

I was to continue, but my head kicked in, questioning my further route. At this stage, there was some proper climbing required; and again, since I thought just to have a look, I didn't have any gear to give me a hand. There's only a shallow line between brave and stupid, and I didn't want to slip into the second. So I went down instead.

Still, it wasn't that this option wouldn't involve some views to admire... 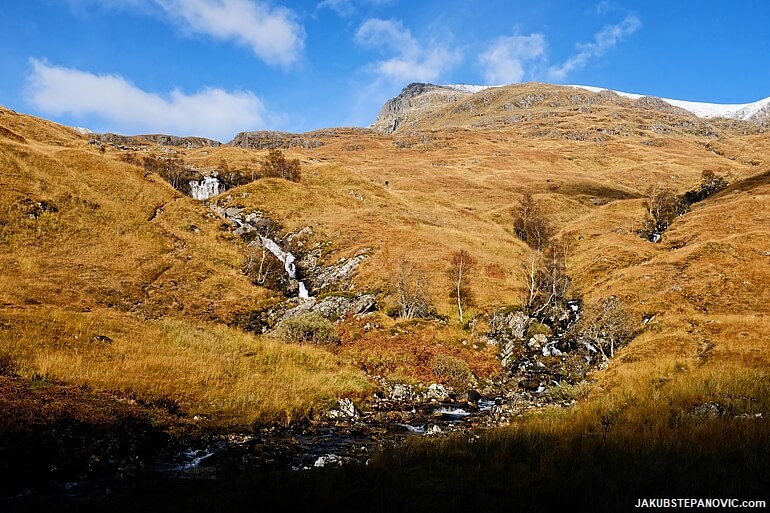 Moreover, I had that webbing business waiting to be executed! Finding two suitable trees, I set pulleys and rigged one of the prettiest slacklines I've walked. 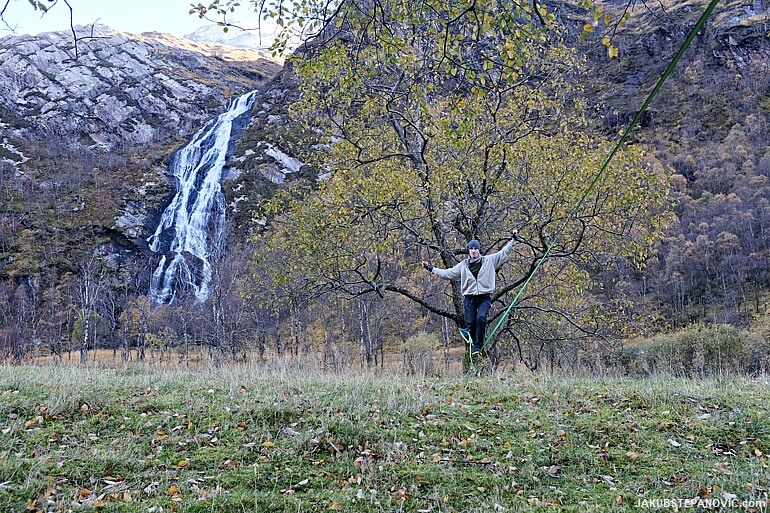 *insert any cheesy line about finding balance in life..*

The end of this relaxing tightrope walking session also marked the end of the whole trip. Packing stuff, crossing that wire bridge the last time... 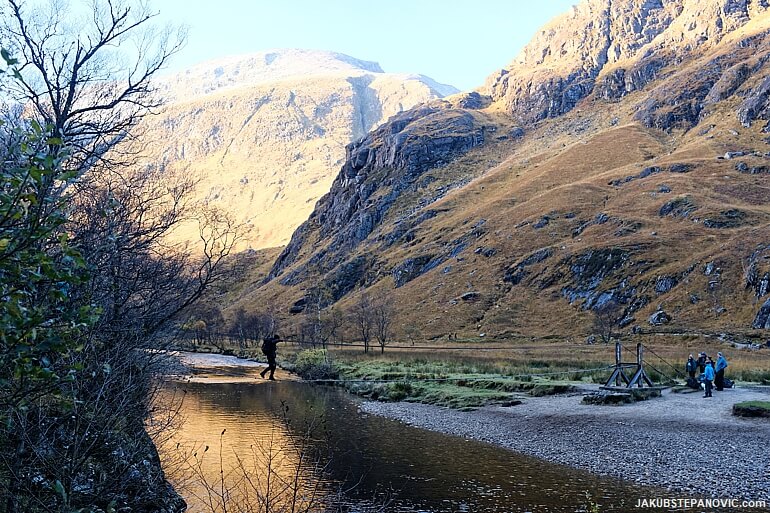