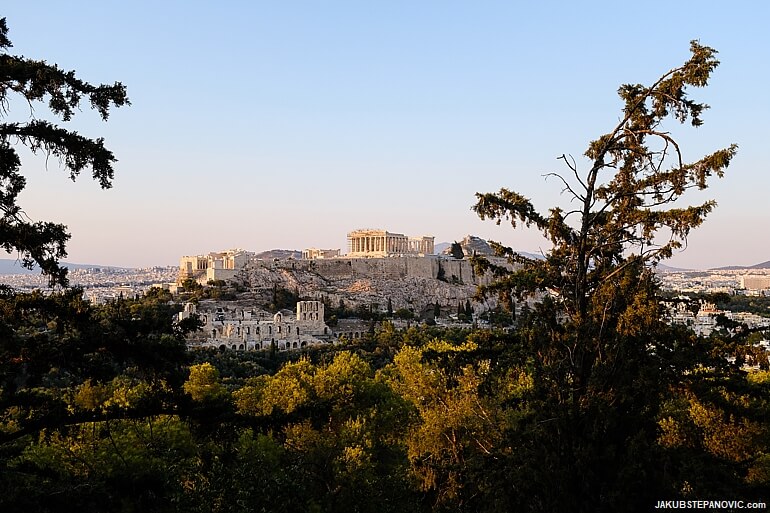 Celebrating the joys of travelling in the cradle of Western civilisation.

My friend and I set to meet in Greece, one of the first European countries allowing leisure visits after the covid-related lockdown. This decision brought me both thrilling and concerning moments. Seeing a country of such an immense historical significance, where I had never been before, with pleasant company sounded excellent. But I also felt like I forgot all about travelling during the past year. "What should I pack for a trip like this?"

Entreatingly, I had my younger me advising me on how to do it because I recalled that I wrote some text about packing before the current travel hibernation. And so, all was well. 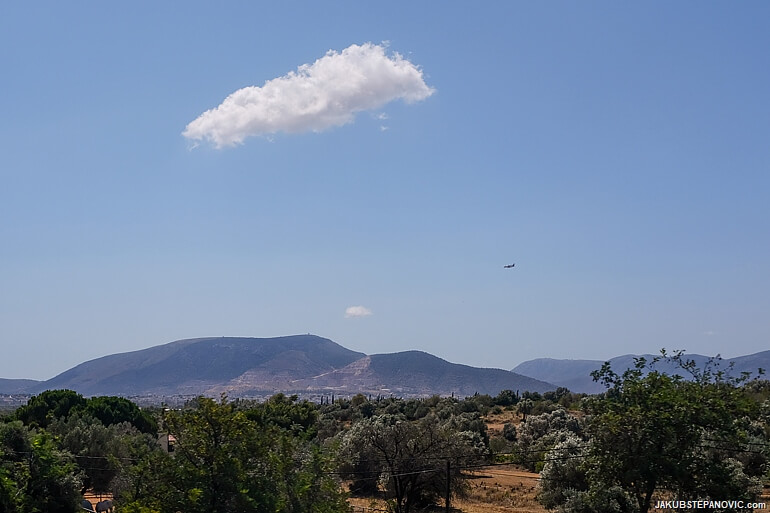 Landing in Athens. The sky had only a few clouds, which turned out to be the only clouds we saw during the entire stay. Each day later was 100% clear.

The journey was smooth; hardly any queues, no hassle. They didn't check my ID at all. Not during the departure, not during the arrival. It was the first time in my life this happened, and it felt rather good. So was leaving to Athens downtown; one can get to the trains in no time. And then it started: 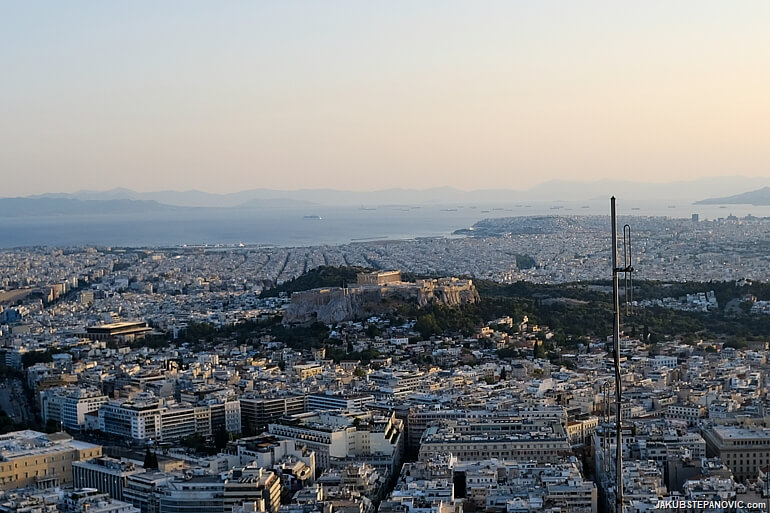 ..is something that, perhaps a bit shamefully, I didn't know much about before this vacation. Well, I had a semester dedicated to Greek art history during high school, where Athens got mentioned frequently, but that's a long time ago! So, this was different to my usual travels, where I research the location in advance and have loads of points of interest prepared. This time, the plan was to take it slowly and relax. Yet, Athens proved to have a great disposition that allows one to get their head around the city's abundant features with ease. 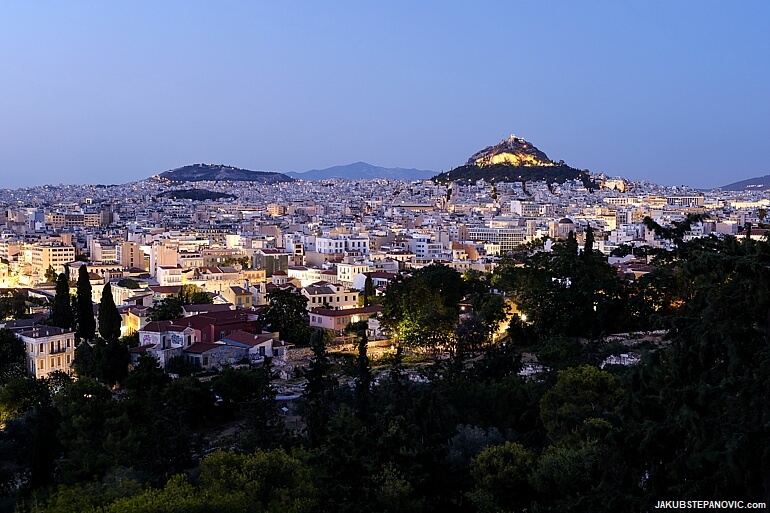 After arrival, I looked at a map and learned that in the proximity of our accommodation is a hill, so we went to check it out to get an impression of the place. It was fruitful, revealing that Athens' central part has three hills, with the famous Acropolis being the one in the middle. It was evident that each of the peaks will deserve a visit. 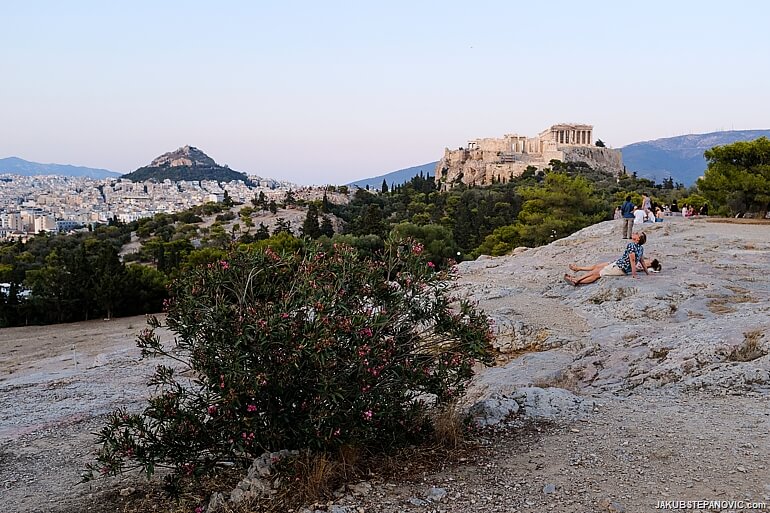 View from the Mouseion Hill on the Acropolis and the Mt. Lycabettus.

And not just the hills. The outlooks on architectural and geographical realities revealed a plethora of potential, both cultural and outdoorsy. The rocky trails of the hill would be absolute heaven to smash on a bike, and there was a cliff with a protected climbing route, which looked fun to scale. It was a pretty pleasing moment, immediately realizing some possibilities the place has to offer without the research in advance or the need for a tour guide. Years of planning and executing adventures are paying off — This is why we travel; suddenly, the world becomes an exciting playground with fascinating corners all over! 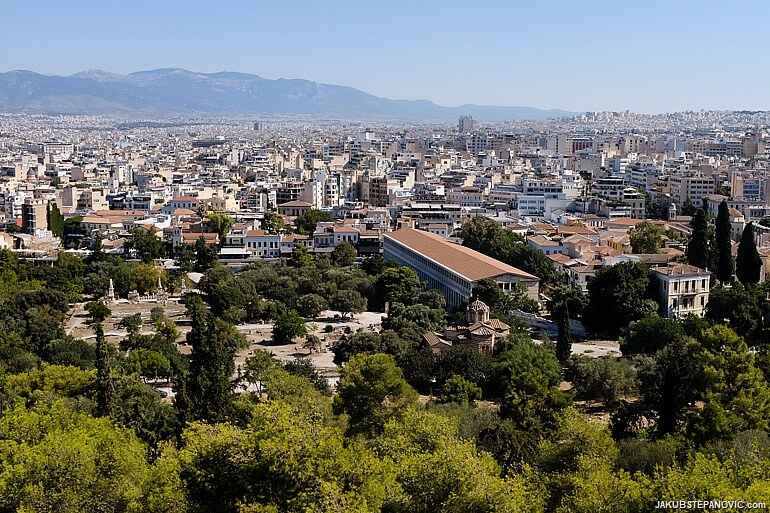 As the plan for our stay was suddenly clearer, we descended to find out how is the city below the hills. One element that stood out for me was the demographic: there was a significant concentration of young people on the hill and even more visible below it. 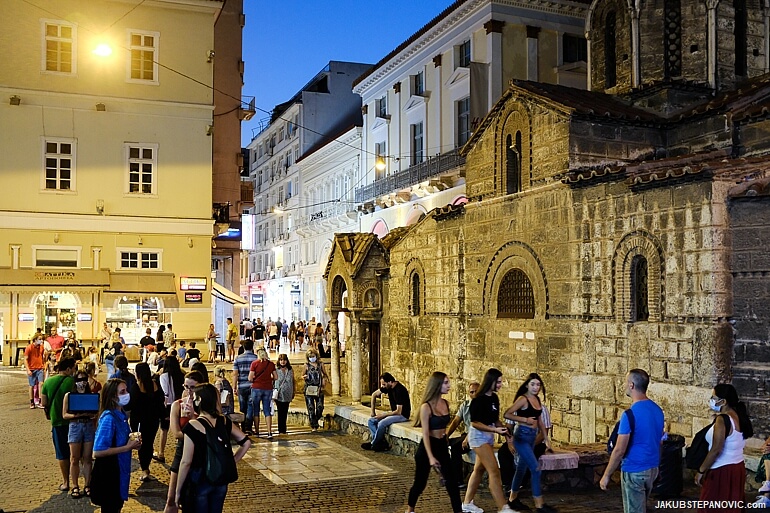 The only time I recall experiencing a place with similar age composition was in Budapest's city centre. Walking through felt energizing, folks around smiled, everyone looked like they are having the time of their life. And we were one of them.

A Greek friend of mine later told me that the older population tends to leave Athens to seek a calmer environment during the weekends, while the youth from the suburbs come into the downtown to socialize. That friend, who, by chance, I met in Wroclaw, also kindly recommended a few other places to visit. Another travelling perk: meeting cool people. So good; let's see more! 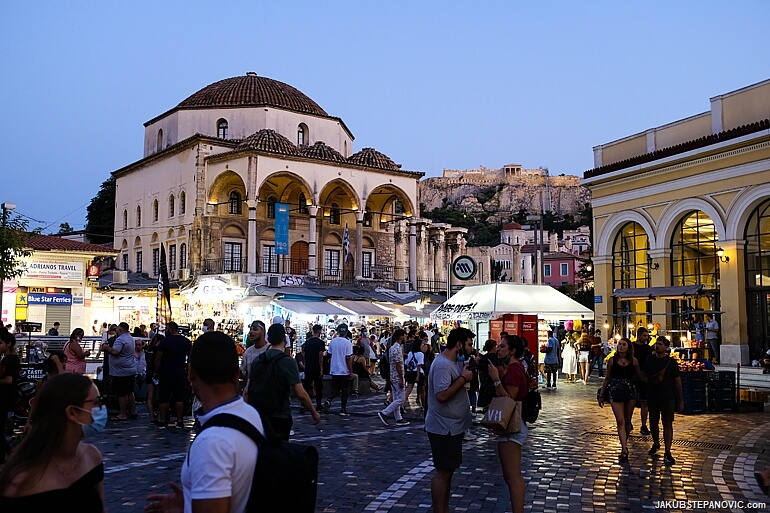 Now, rather than going chronologically, I divided the notable sights we encountered into a few categories. And to keep this post, hopefully, a bit easier to navigate, I hid some of the pics, so you can either follow the story or see more of the photos, if you click on a line with an arrow, like the one below: 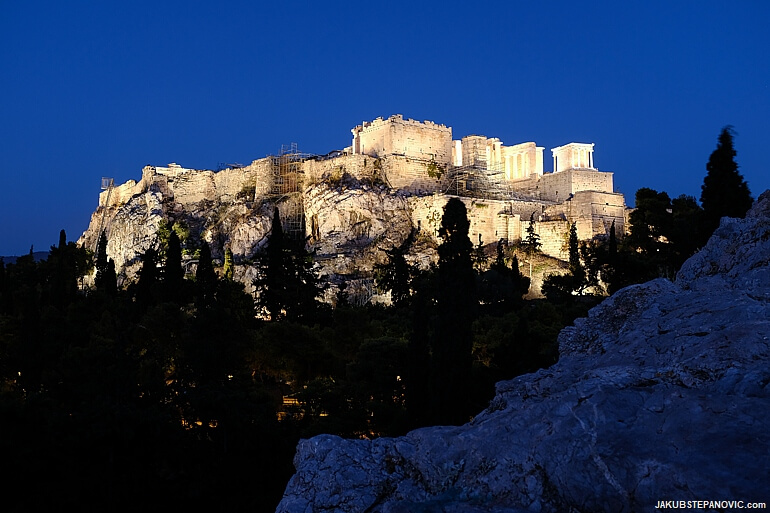 Of course, it is a must! As usual, early morning birds eat the worms, and while we weren't there alone by a long shot, it was far from overcrowded. And so, one could stroll through this magnificent complex of temples and admit that it is famous for reasons.

Sitting in front of the Parthenon offered stimulating contemplation. I thought about how this country has such a long philosophical tradition, its mix of humanistic and mythological practices, and above all, how the invention of democracy shaped the world we know. As someone who grew up in a society built on the Greco-Roman intellect, seeing these walls felt unreal. What a grand thing this is!

Who knows how the world would look today if it weren't the civilisation that built this here?  I also observed how fragile these achievements can be, mainly in the challenging context of twisted populistic discourse and disinformation campaigns. Still, I couldn't stop thinking how relevant some of the ideas that emerged here are still so relevant today. Socrates coined the term "citizen of the world" some 400 years before Christ. How cool is that?

And then, there are the architectural details. So much engineering and aesthetic research in here! The columns that I only knew from photos in the art history class and a few books felt wonderful in person. This is why we travel, to learn and self-reflect hands-on. 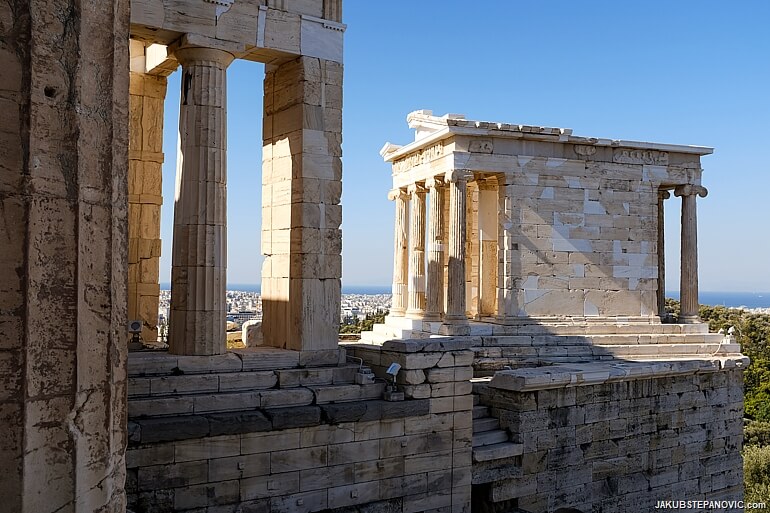 Of course, modern Athens isn't just the Acropolis. Plenty of Other Structures are worth checking out, many having cultural purposes: 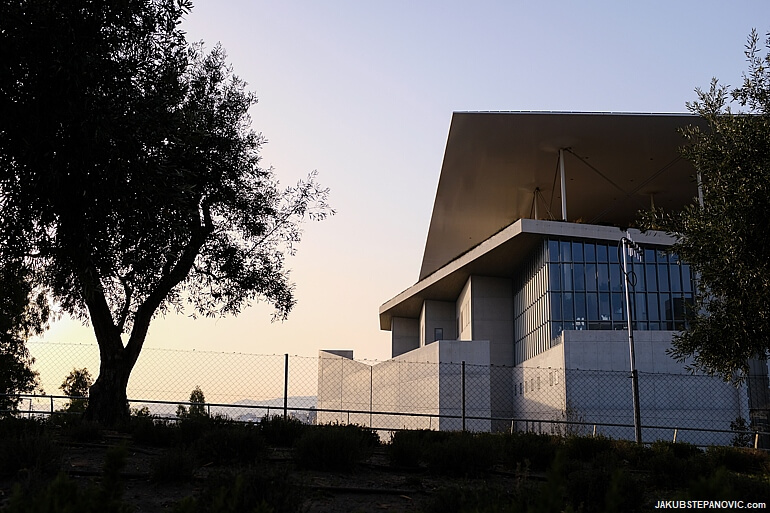 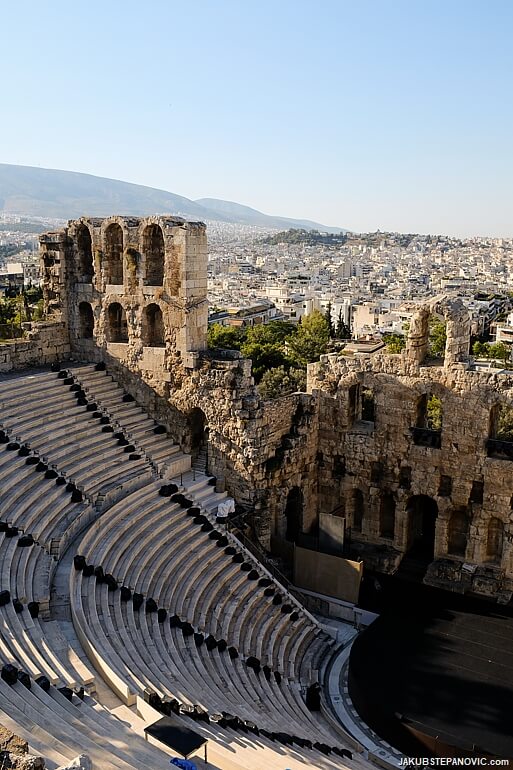 Odeon of Herodes Atticus, a theatre from 161 AD. It is being used nowadays, and can seat 5000 people. 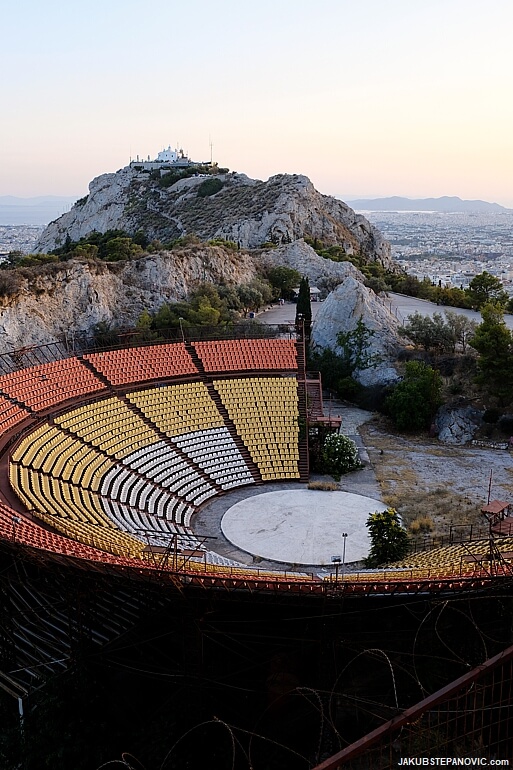 Former quarry on Mount Lycabettus, since the 1960s revitalized into another outdoor theatre. 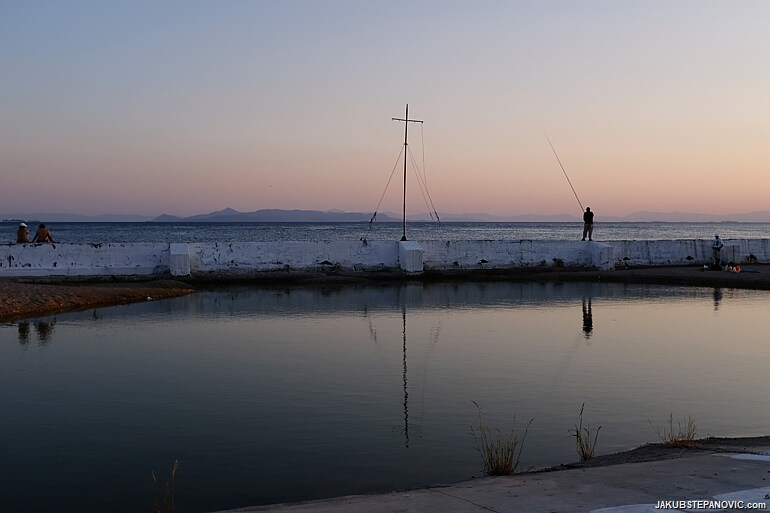 Another must was dipping in the sea. However, getting to the shores was spiced by a quest to do. Since people at airports think that any liquid over 100ml is equal to a launcher with a thermonuclear warhead, I left my sunscreen at home. That said, I had to get a new one, as my skin skip the tanning part and burn right away. And, It turned out to be a challenging task, as many stores marked on google as open were closed or out of stock. Asking the shop assistants was a step to an unknown, as... well, I speak no Greek. But it's okay; that is why we travel: to go outside our comfort zone.

Eventually, I scored. Just in time! Dosing my skin with a liberal amount of the strongest sunscreen they had, we could move on to the sun-lit seafront. Yey! 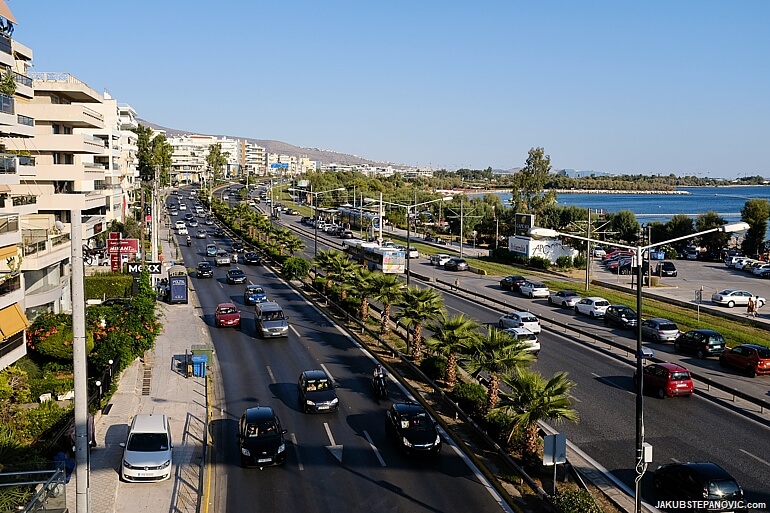 The water here is surprisingly clean, but the beaches are pretty crowded. As I prefer a bit of personal space, we moved to an area with large wave-breaking rocks, which was all for us. 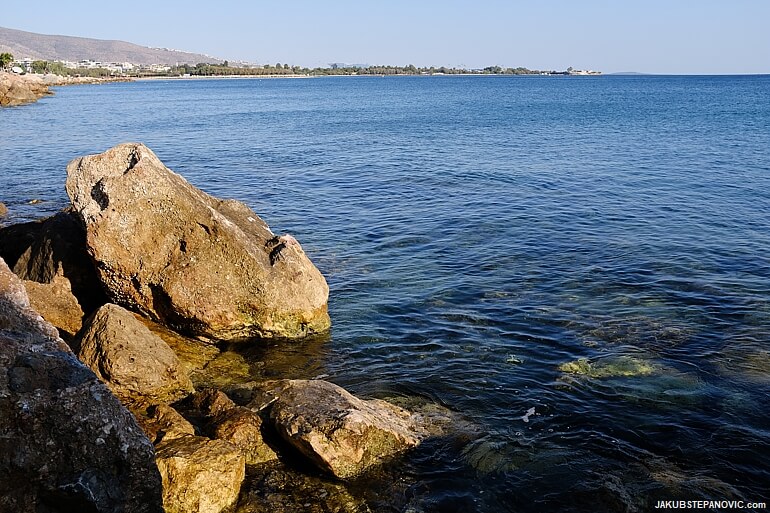 Swimming there was terrific. See, the last time I swam in the sea was up in Scotland, where the water is, umm, fresh all year round. That said, one needs to keep on moving to stay warm. Slovakia, where I stay now, has freshwater lakes with pretty warm water, but one must keep moving to stay afloat. Here, I could finally enjoy the buoyancy of salty water in its full glory. It is like having a life vest! We could chill and let the waves swing us up and down. Yes, this is why we travel: To do things we cannot experience in the place we live.

The sea was also a nice way to cool down. Another way we stayed comfortable was to time our programme accordingly. Exploring the outdoors during decent morning and evening temperatures while staying in AC'd spaces during the highest heat. This brings us to Museums.

First, we went to Benaki Museum, a sumptuous former family mansion of an art collector, now open to visitors to showcase Greek culture. It is located in an affluent neighbourhood boasting similar palaces serving as embassies and rich foundations' offices, many of which are fortified by prison-like fences. There was a heavy police presence, and the Presidential Guard base nearby further added to the policed feel. The museum, however, delivered. It has a well-presented cut through local art from prehistoric times to the 20th century.

The next day we went to the National Museum of Contemporary Art. 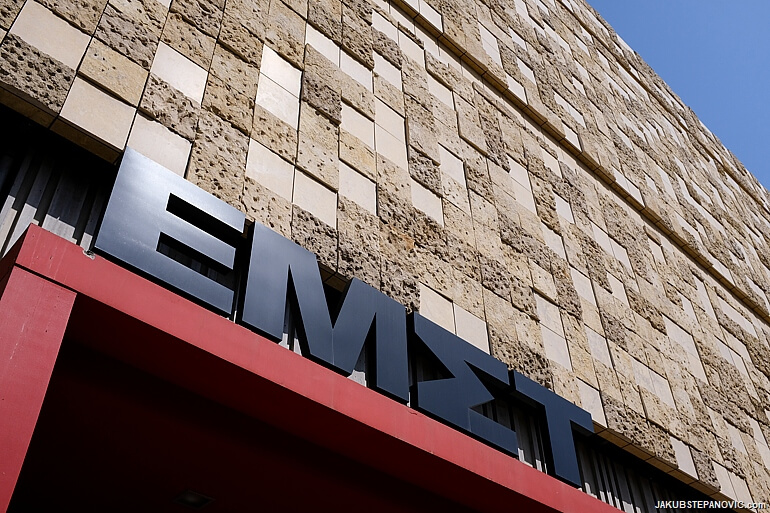 I guess, due to the nature of work I do, it is no shock that I love such places, as they often offer thought-provoking pieces and attractive visual packages. In this regard, ΕΜΣΤ passed with a superb mix of both.

Another place one can escape the heat and see some art are the local metro stations: 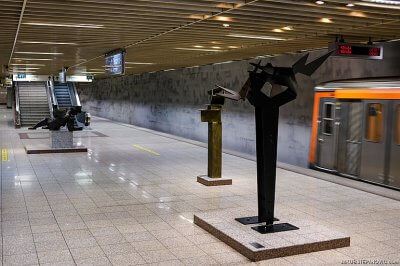 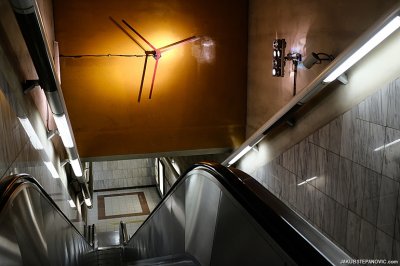 Moreover, some of the stations are over 150 years old, which is very cool, too. 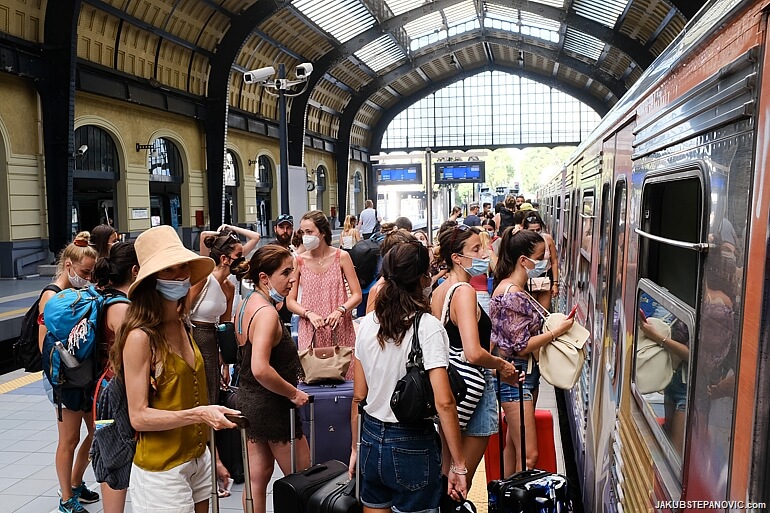 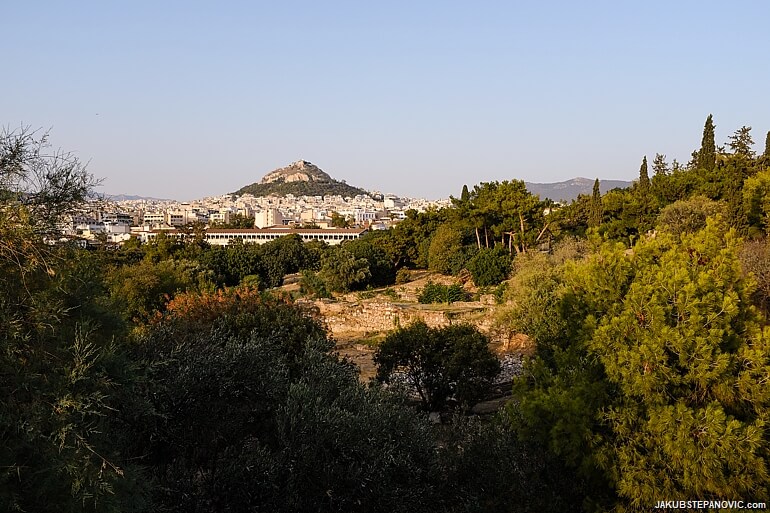 Lycabettus from the Acropolis

Athens' parks are other sanctuaries to shelter from the sun, and many of them are beautifully crafted. Also, like in Shanghai, there are more cats than pigeons.

Greece's sun is mighty powerful but also provides for marvellous Sunrises and Sunsets. 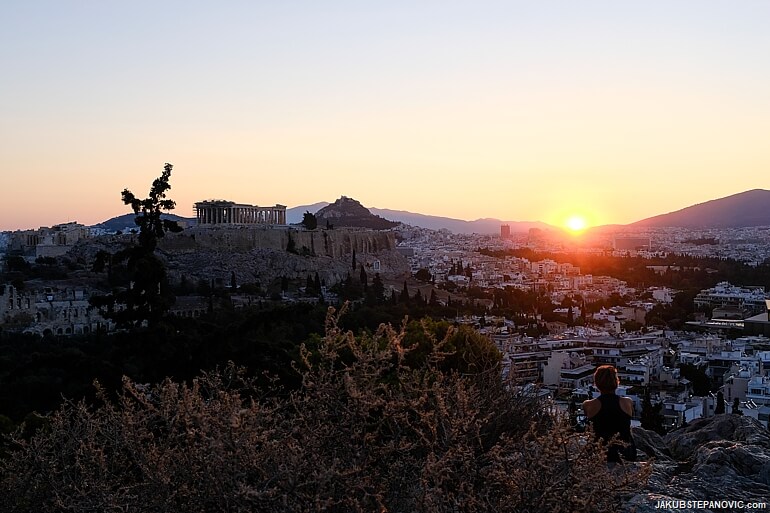 Yeah, I hear you. "Vacation's sunset pics are boring kitsch." Yet, since the sunsets formed an inseparable part of our Athens stay and we thoroughly enjoyed them, here we go: 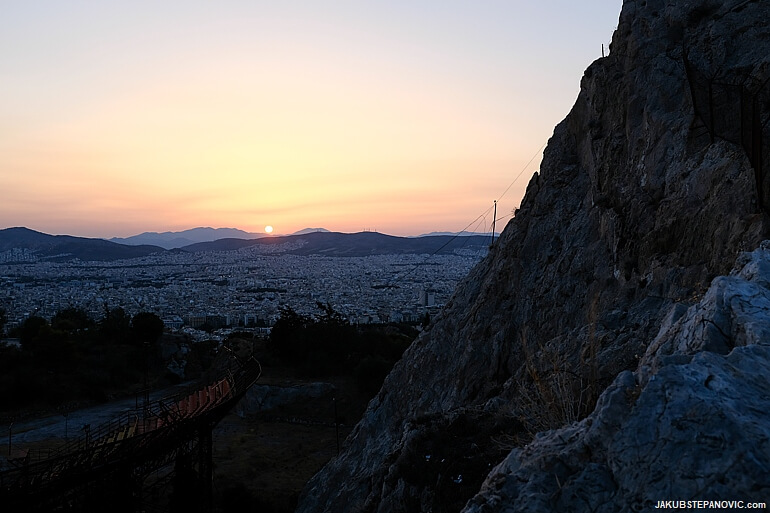 All the categories above are connected by another fascinating element: Athens' Streets. 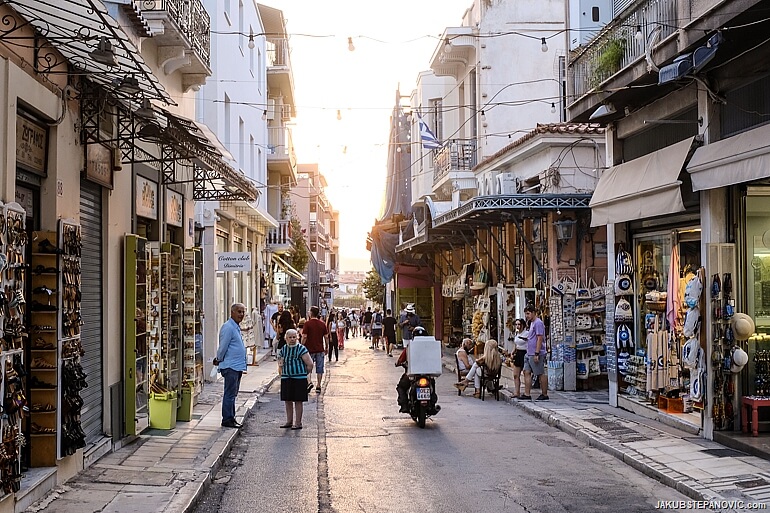 They are alive! There are plenty of small shops and cafes all over the place, so they attract people to walk through. Interestingly, similar scenes were once typical in most cities in Europe, but then many of them built massive shopping malls, which took businesses and the people off the streets. I prefer lively streets, like Athens has, much more than having a fancy mall in a deserted city, so I had a blast exploring them. 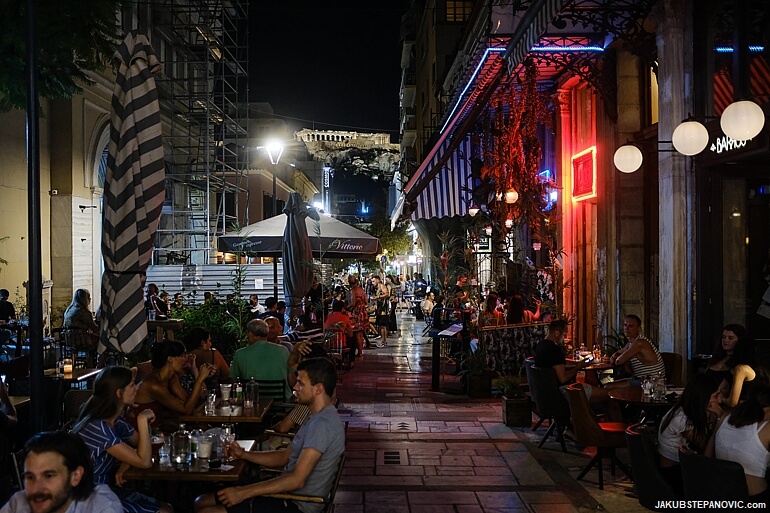 From Athens, we continued our journey to Crete; I might post about it later, stay tuned. That's about it. We enjoyed Athens a lot, but I am sure you got it since you made it here.

Alternatively, browse my blog archives for more topics and categories. Thanks for reading!