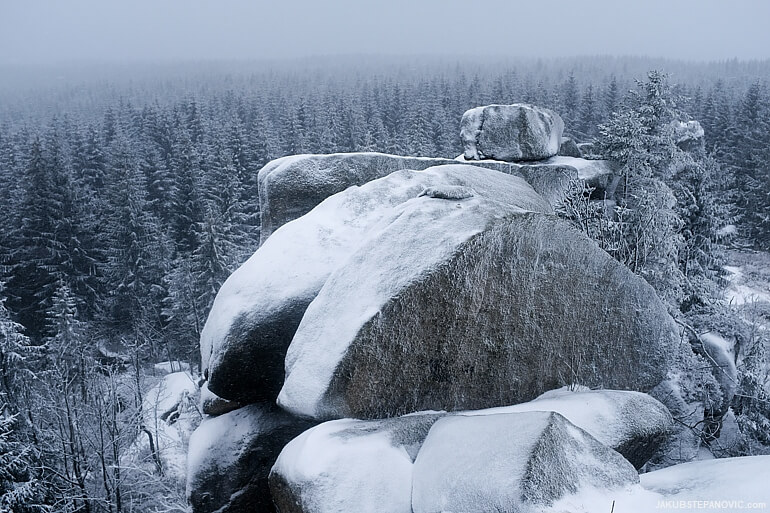 Enjoying grayscale tones during the first hike in this year's snow.

November always seems to bring some mixture of bleakness and excitement. One evening I am grieving as the daylight hours plummet, the next one I cherish the space it gives to have calm moments with good people while sipping a cup of some warm deliciousness. The weather reflects the swings too, bringing vivid landscapes one day, and bitter cold with limited visibility and colours on the other — Just as it happened when my friend and I went for a hike in Jizera Mountains' forests. 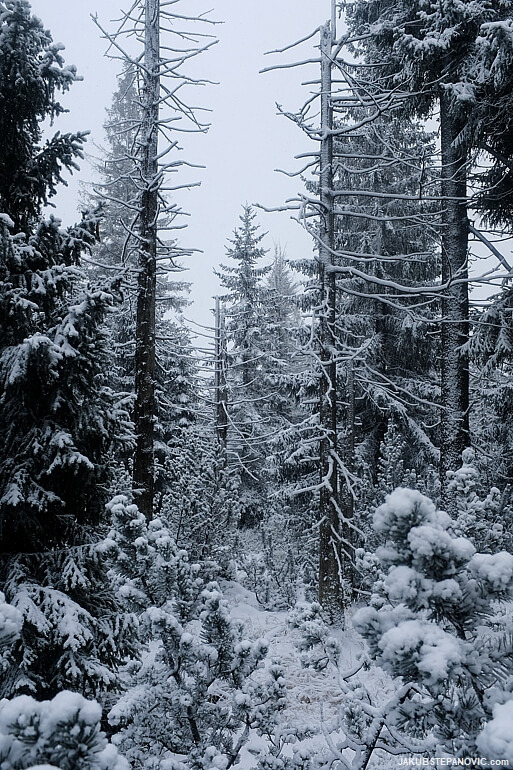 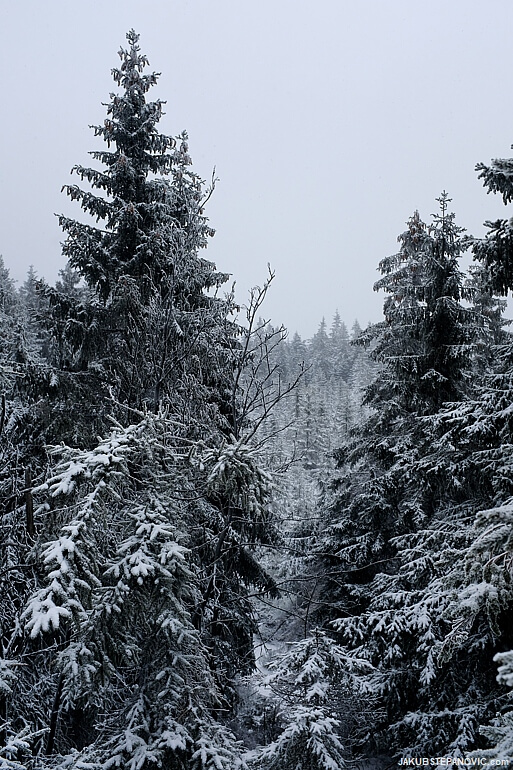 We made our way towards a set of rocks called poachers' stones, named after a fugitive soldier from the period of Napoleonic Wars, who stayed here and poached for living. 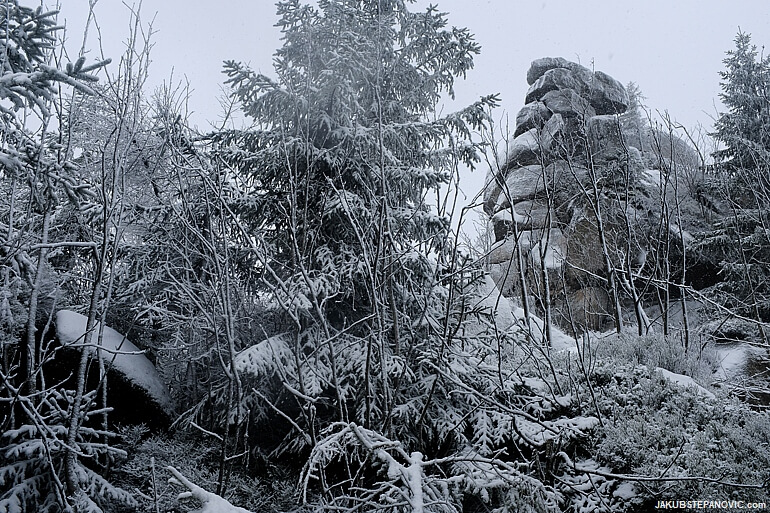 It is possible to climb on the top, where we got a view of the woods nearby. 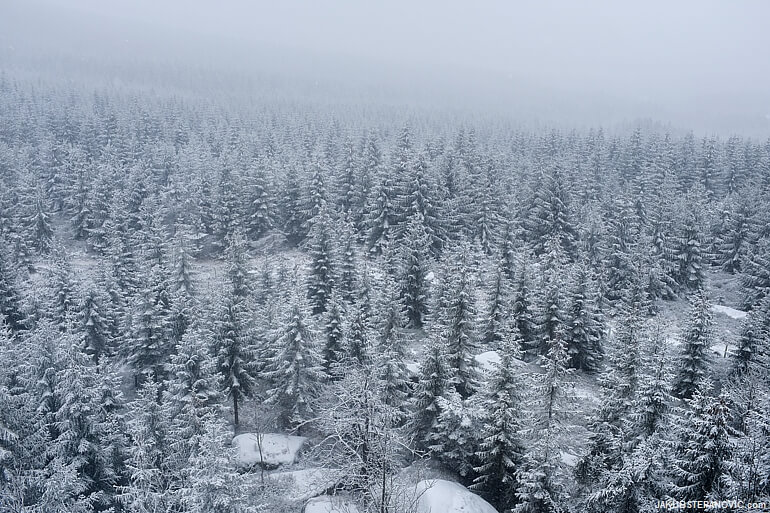 The quality of the outlook could be debated, as one can see much further during a clear day. But the good thing about the bad weather is, that unless it threads lives or property, its sad appeal is only a matter of mind. As a with the proverb, "there is no bad weather only inappropriate clothing," the mental state works likewise: If one doesn't set unreasonable expectations, they won't get disappointed. 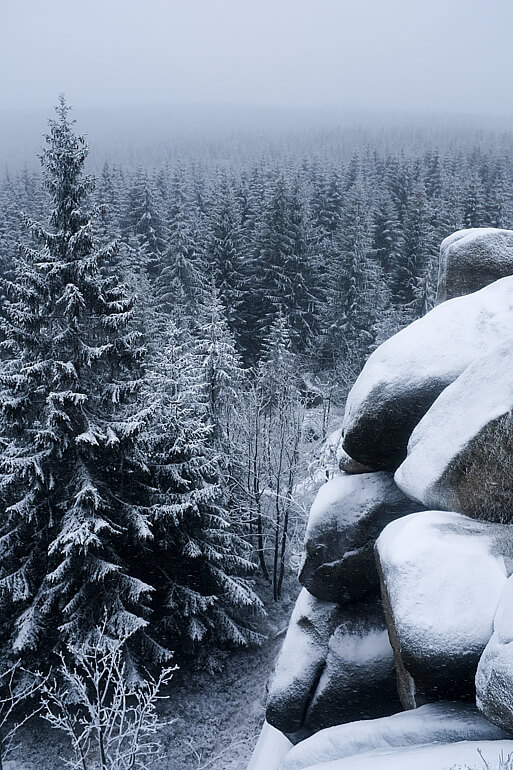 And so, I found the clouds merging with the earth pretty charming. 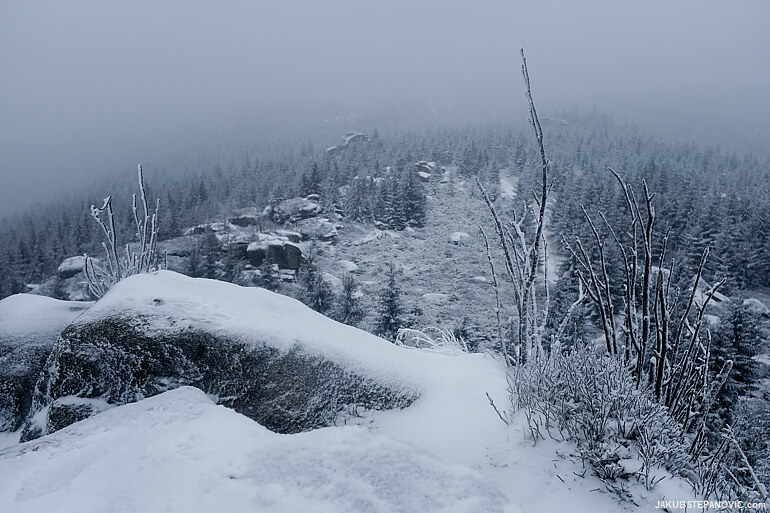 It brought a fusion of muted tones inviting to sit down and relax, and violent wind gusts, reminding the nature's power hidden in the mist. Hello again, November contrasts. 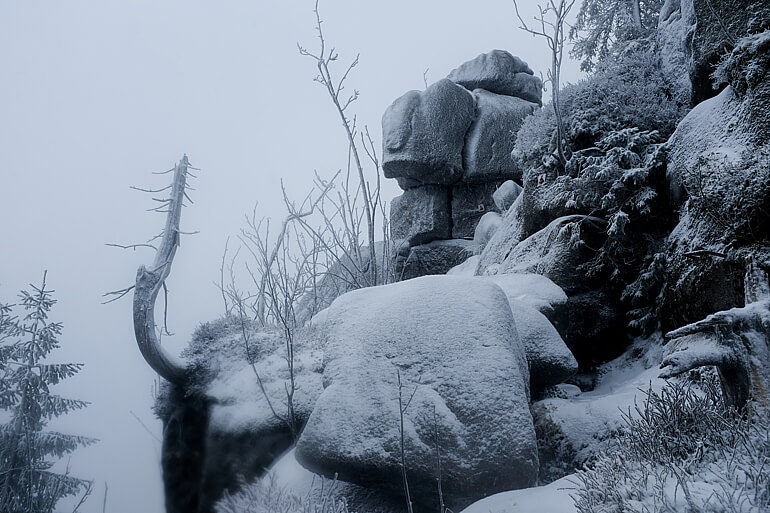 We had a picnic below the rocks, taking delight the mysterious atmosphere while being shielded from the elements. Later, we went towards a glade nearby to make a loop rather than to return the same way. Dense spruces gave up to mountain pines... 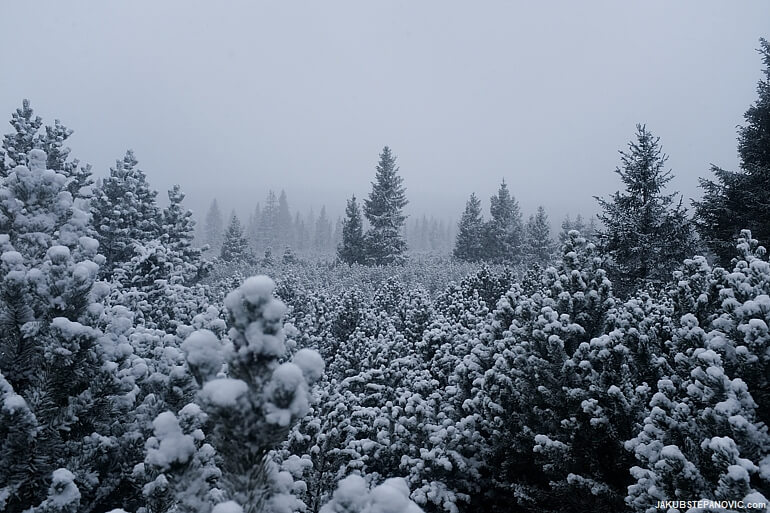 .. and eventually to boggy grassland, which offered more to scenes to admire. 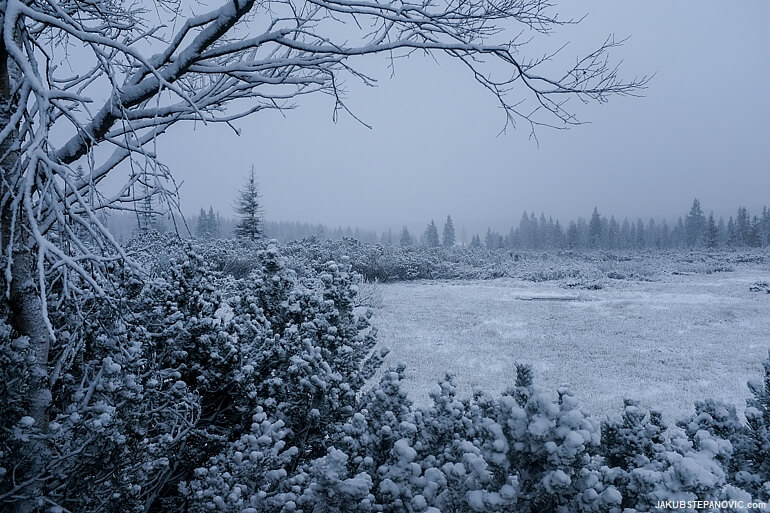 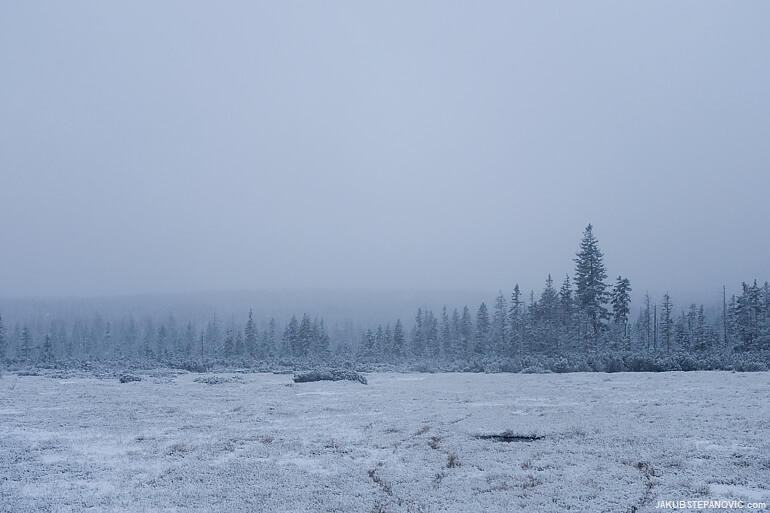 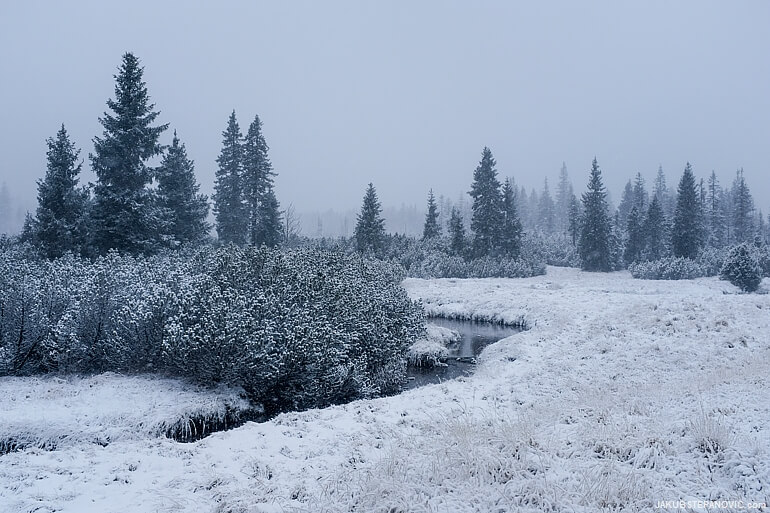 Through the glade flows a stream, which brought us back to civilization. 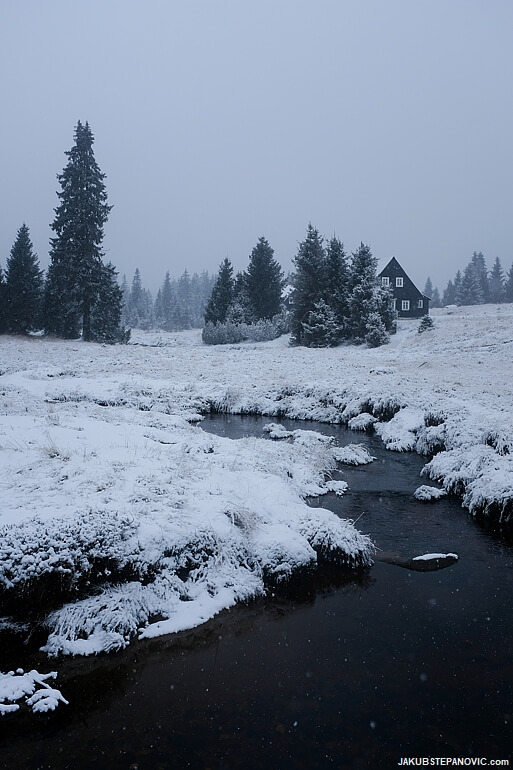 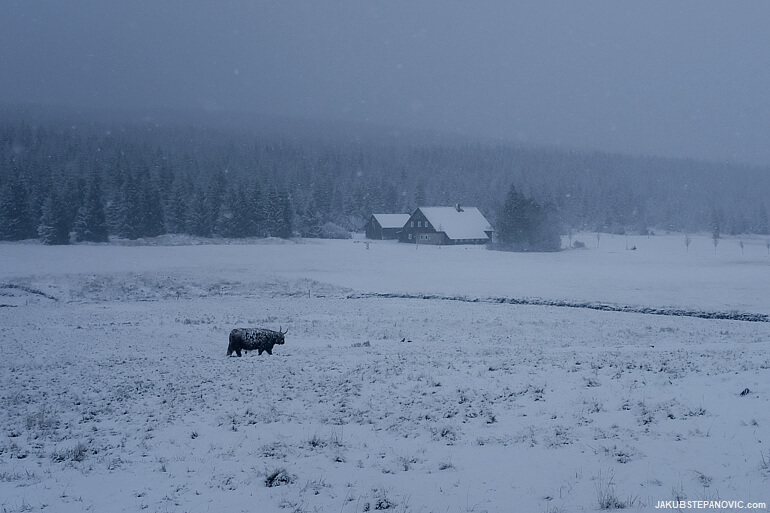 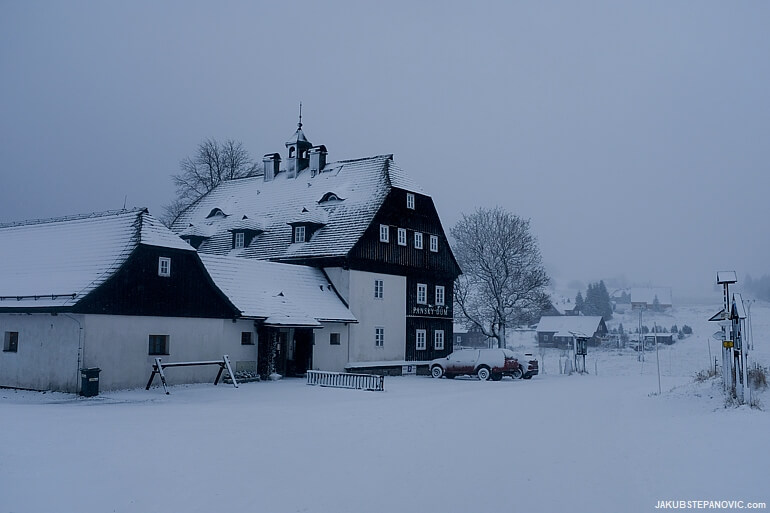 The Jizera Mountains can be colourful, too. But if you liked the naturally faded palette in this story, check out my posts covering similar conditions in Scotland: