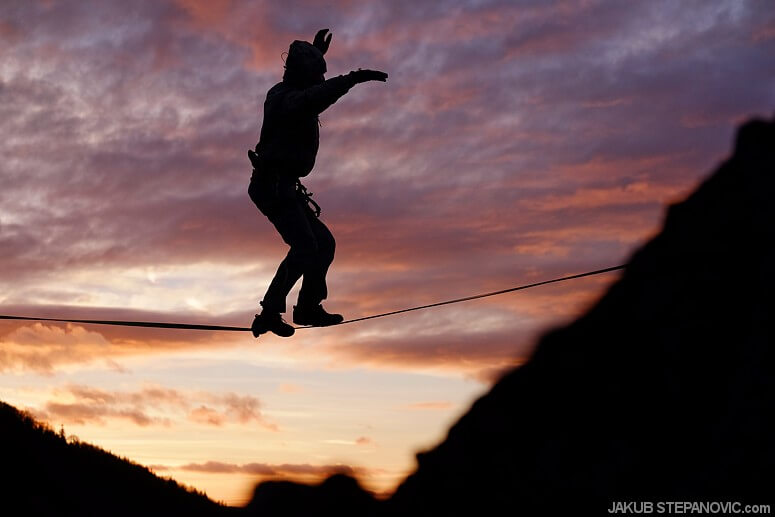 Sitting in an open space on a one-inch wide strap tightened between two tall granite towers during a cold December day. Strong wind blows me from side to side, and I am as happy as a human being can be: A story about attending a Highline meeting.

Slacklining, a kind of tightrope walking, is a bit unusual activity. I got to it some years ago when a friend of mine introduced me to it; I gave it a try and liked it. While I never devoted as much time to this hobby as him or some other people, I enjoyed this sport from time to time. So, when he invited me to join an annual Christmas Highline meeting in Czechia's Jizera Mountains, I was thrilled to join.

I met the friend and two other slackliners in Liberec, the region's largest city, and together we went towards the town of Hejnice near the meeting's location. 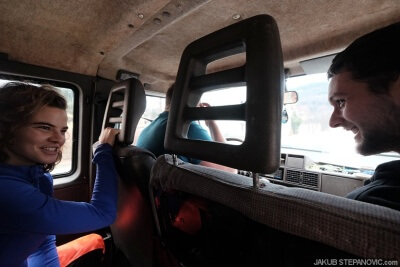 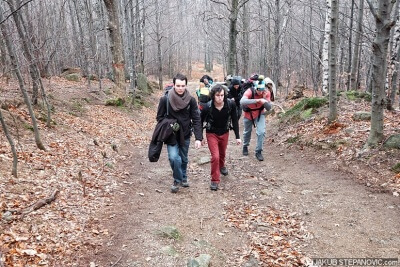 In Hejnice, we joined another group of slackliners and took a short hike to climb an 800m /2625ft tall mountain, Oresnik. The thing is, Highlining is the royal discipline of slacklining, where the webbing is suspended high above the ground — hence the name Highline. And the Mt Oresnik has an excellent disposition for achieving such a feature. 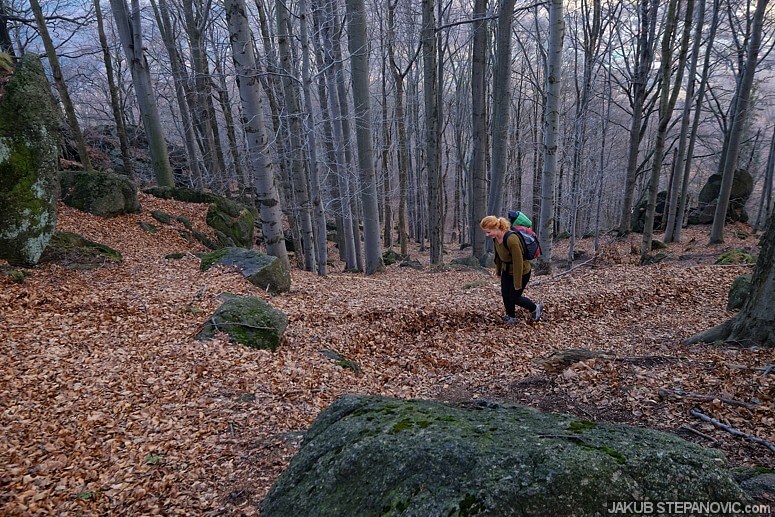 The Oresnik's elevation can be seen as tiny compared to peaks in some other mountain ranges, but since I arrived from the flatness of London, it felt pretty steep to me. It was okay; tho: the forest around is neat, the trail passes some beautiful rocks, and the slackline people are a cool bunch to hang out with. So, we reached the top in what felt like no time. 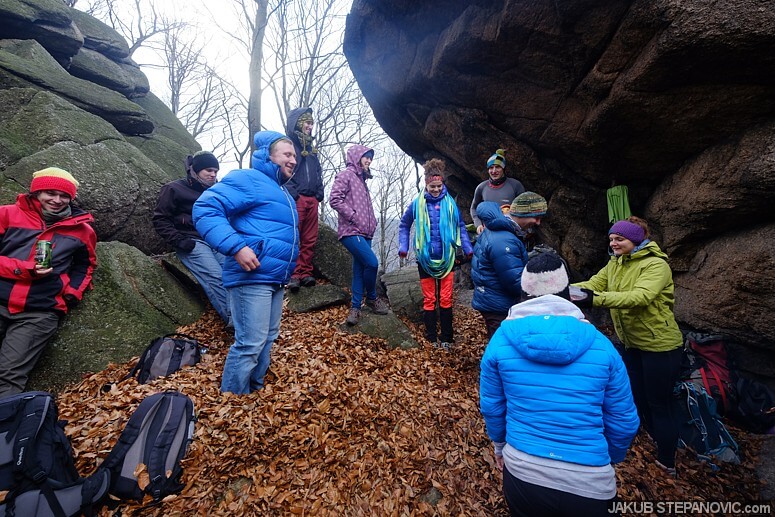 The summit is topped with massive granite blocks that offer a convenient shelter from the elements and are also the foundation for anchoring the Highline on the top of them. So when we caught our breath, we climbed up, and the guys started rigging the line. 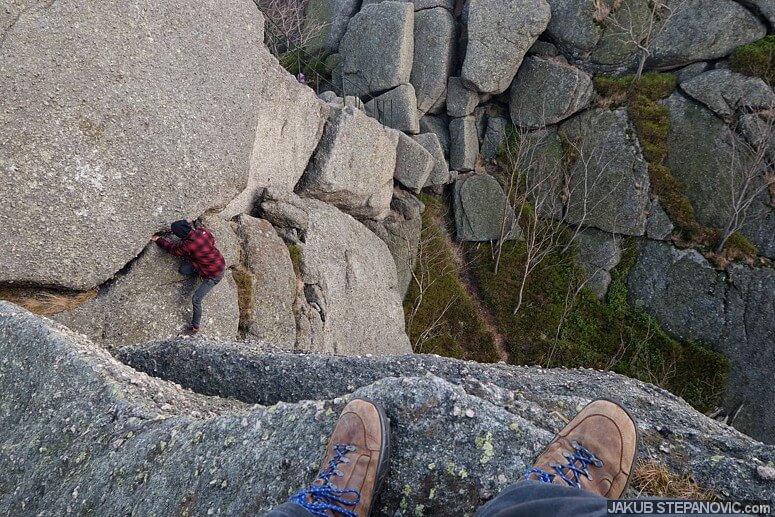 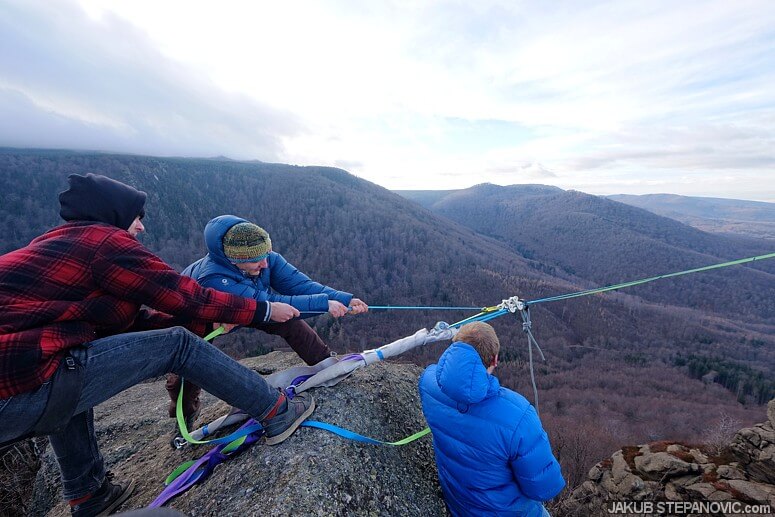 The tallest of Oresnik's granite towers is accessible by steep stairs carved to the stone in the late 1800s. The top has a small observation platform with a large cross. However, most of the meeting's action is happening between two a tad shorter towers right next to the main one – that's where the Highline got stretched. 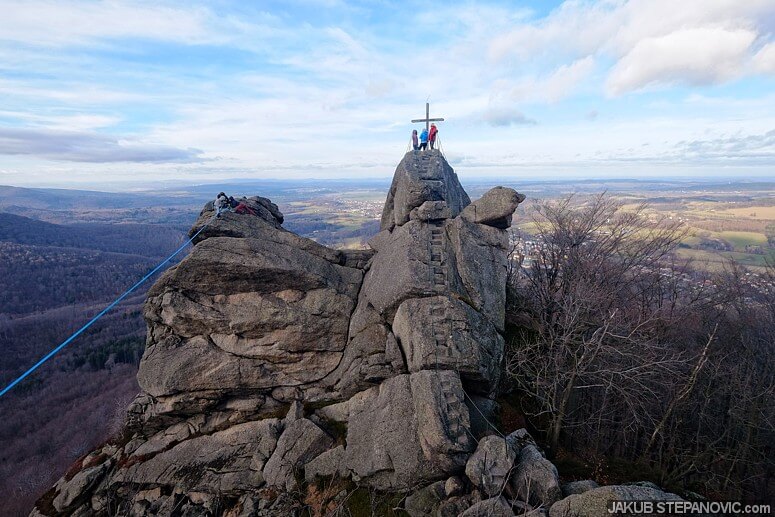 Oresnik has some great outlooks on Hejnice and its surroundings. One can see a Baroque cathedral from the first half of the 1700s down there, a former Franciscan monastery. It was the local monks who erected the cross on Oresnik's summit back in 1813. 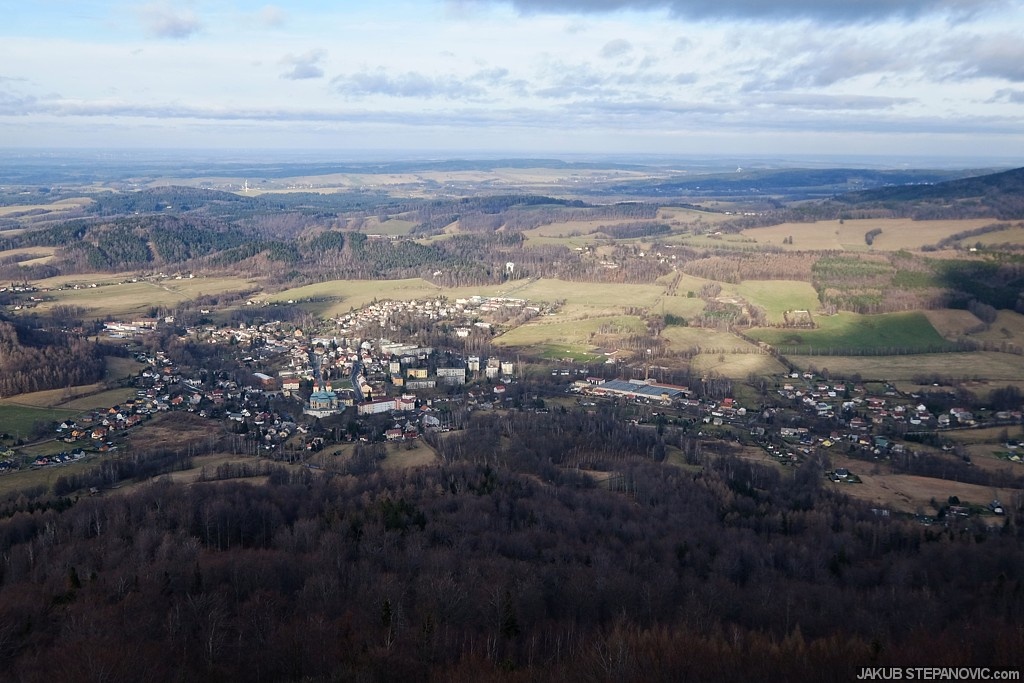 Within a few minutes, the views on the landscapes around got shadowed by another cool spectacle: the people started walking the line: 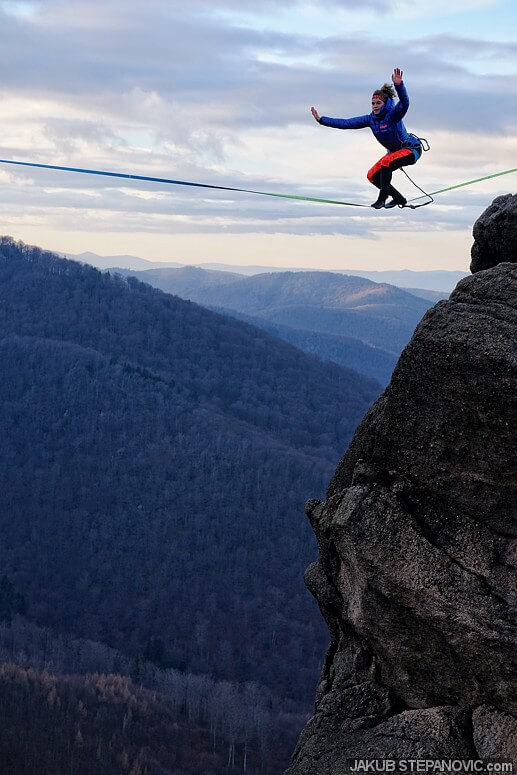 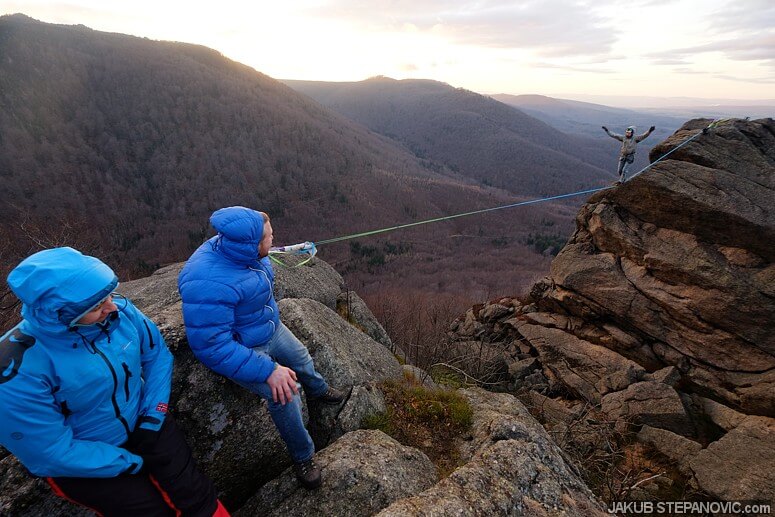 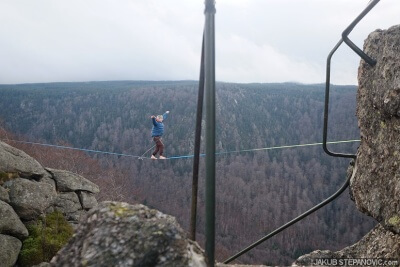 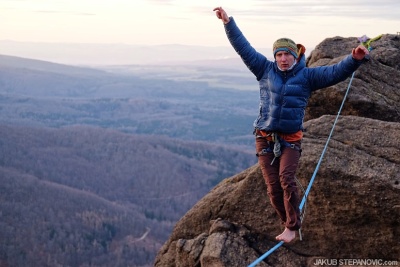 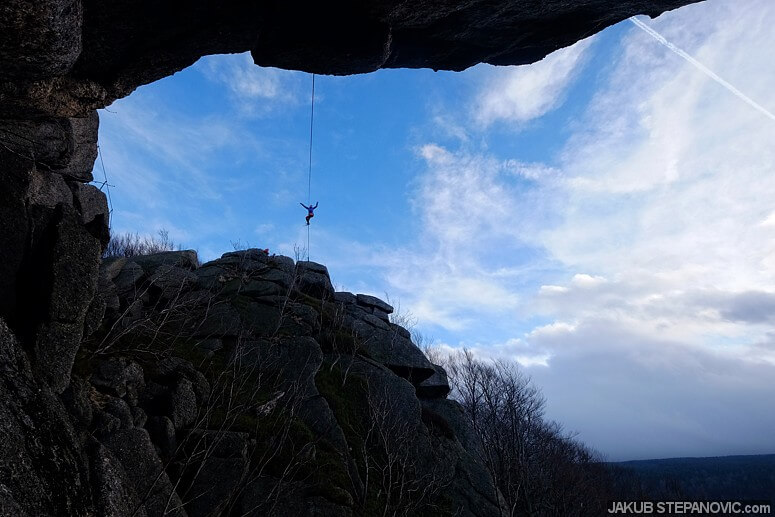 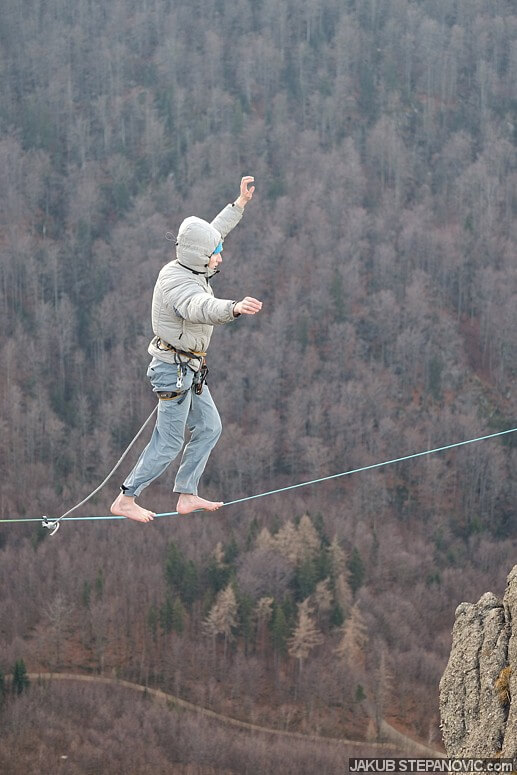 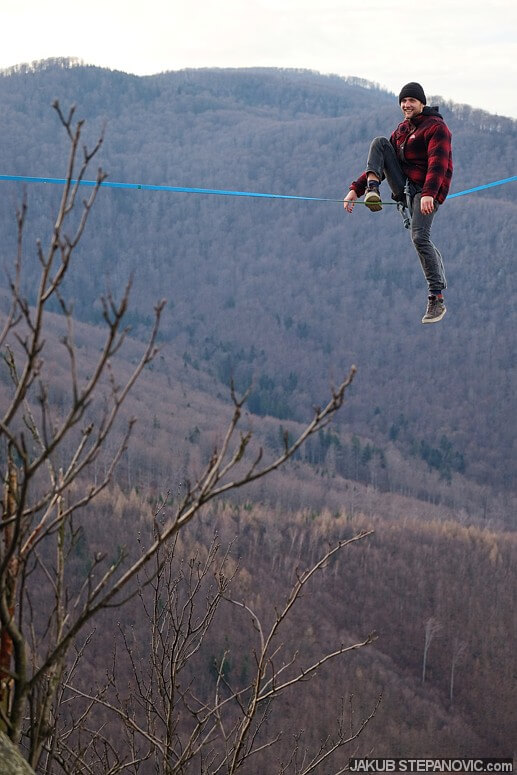 It was a cloudy day with only a few distant sun rays visible. However, there was a short exception, which lasted no more than a minute. Still, super neat to see: 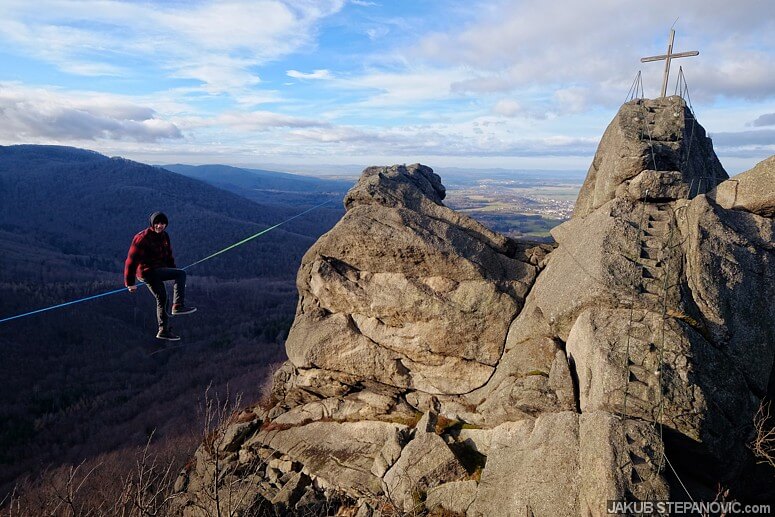 The clouds themselves would be fine, but the strong freezing wind profoundly impacted the conditions. It caused the line to be much more challenging to walk on; the strap oscillated in every direction like mad (see the video below the article). My friend commented on the situation as, "This is more fun; it'd be too easy otherwise," but I had to significantly downgrade my expectation to do a few steps. 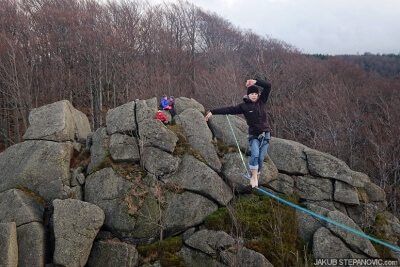 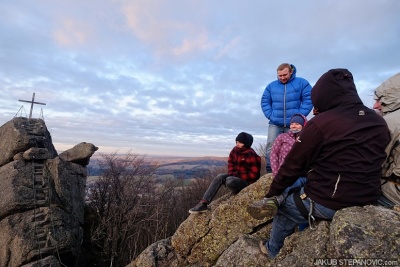 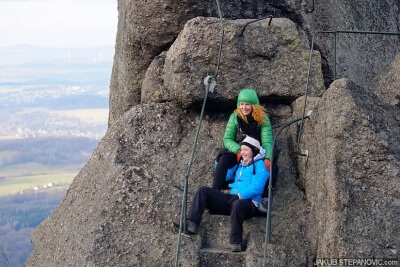 After some messing around, all hardcore slackliners already walked the line. It was my turn.

Just as I got on the strap, I knew that it would be a success if I'd be able only to stand up, never mind to walk. To do so, one starts by sitting on the strap and placing their feet on it, then shifting the weight from their bum towards legs. It might be easy in theory, but performing it on an inch wide surface wobbly as heck, well, it is a different story. I couldn't overcome it. Several attempts later, I simply sat down, enjoyed the open space and the vistas, and let the wind swing me from side to side, up and down. It was terrific.

Then I retracted to the solid ground, letting the others do stuff from a different league. 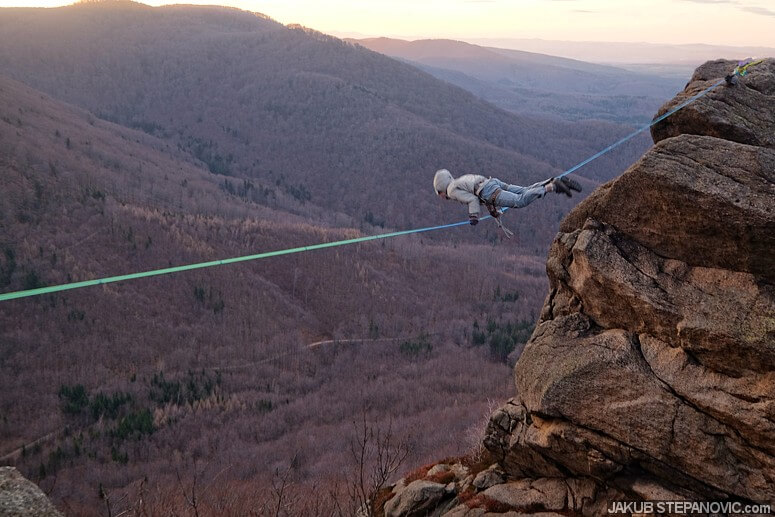 This is what you do when "just" walking is a piece of a cake to you… They make it look so easy!

Meanwhile, I enjoyed the sunset, colouring the sky with pretty clouds. 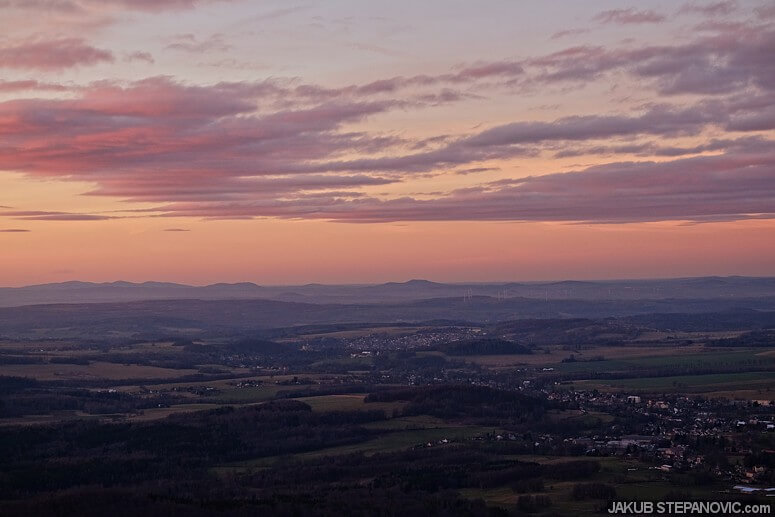 It was getting darker fairy quickly, so we packed our stuff and began our descend. 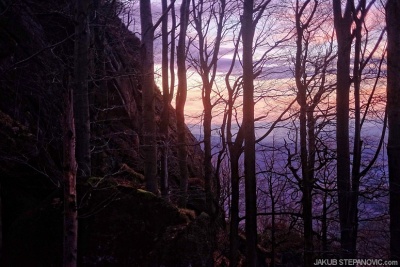 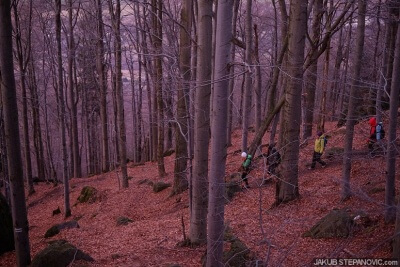 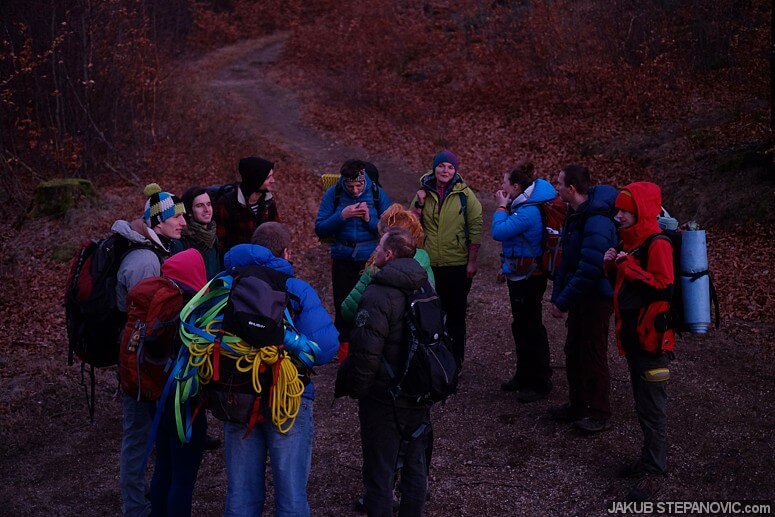 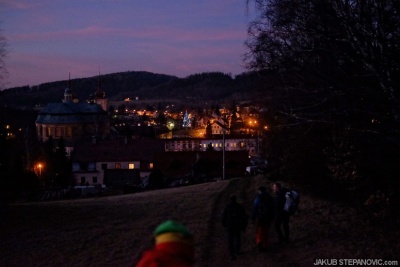 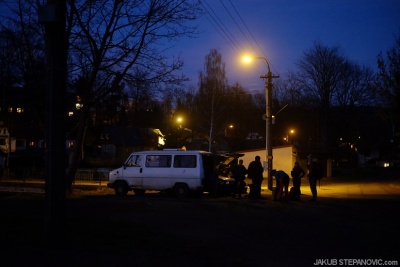 By the time we got to the town, it was already dark. But while the sun was gone, the day wasn't over yet. We went to one slackliner's house nearby, where we had good times until late hours. What an amazing experience!

See my video from the meeting:

Alternatively, you can visit my Blog Archives for more topics and categories.