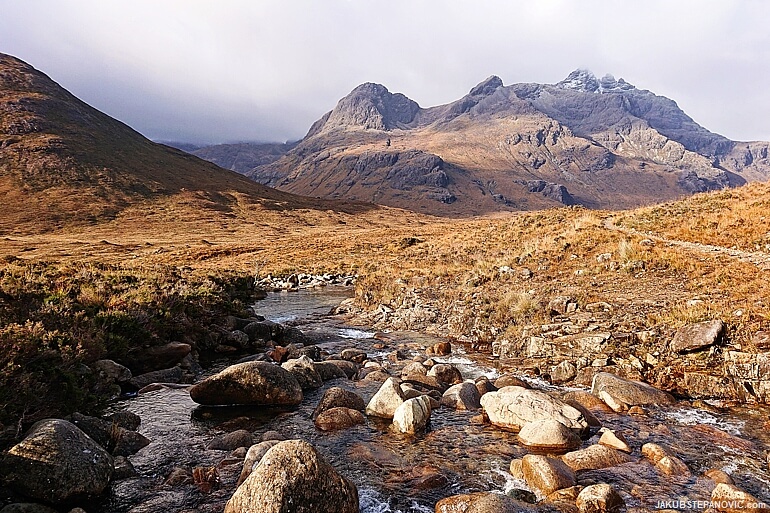 Biking to the heart of Skye's Cuillin Mountains.

Ever since I went to the Scottish Isle of Skye for the first time, I have become very fond of the Cuillins: steep, pointy peaks rising straight from the sea level and playing with many colours due to their geological origins. There's a glen dividing the Cuillins into the Black Cuillin and the Red Cuillin (also known as the Red Hills).

During the first trip, I admired the ridges only from a distance. It was clear that they would deserve a closer look. Back at home, I opened topographic maps and learned that the glen is 13km / 8mi long, ends on a remote beach, and has a path going through. "That would be amazing on a bike," I thought. "Maybe one day," I was dreaming. A few weeks ago, I made the dream reality.

My starting point was Sligachan, a small settlement in the middle of the island, where's an important road junction, a hotel, and this view on a neat old bridge and the mountains. Such a combination makes it a popular place among tourists. 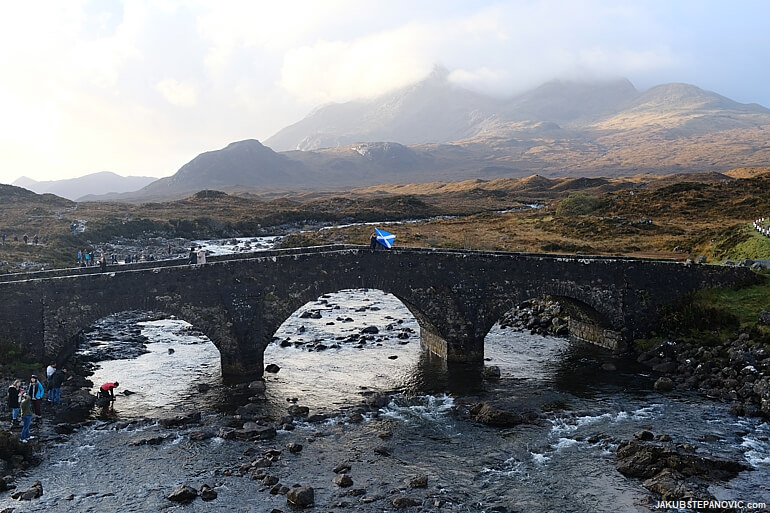 When you pass the bridge towards the glen, you enter a world without the conveniences of civilisation. Just like that, the tourists disappear too. All that's left is the narrow path to the glen. Hey hey, excitement! 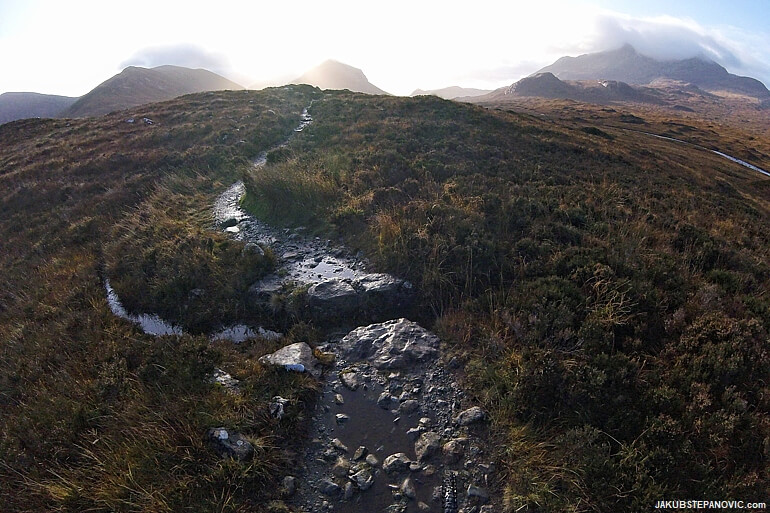 I didn't search for any photos or detailed descriptions of the path. All I knew was the distance and elevation profile. That way, I kept the element of adventure; I was in for a surprise. The first portion of the trail has relatively frequent water bars, but as the vast majority of them are hoppable, they presented entertaining diversifications rather than annoyances.

Soon, both sides of the trail got enclosed with the steep walls of the glen. Stunning sight. 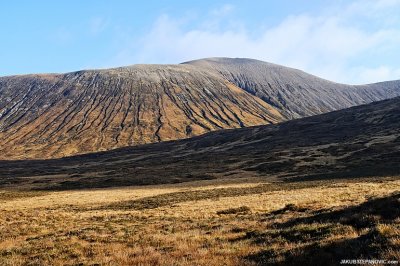 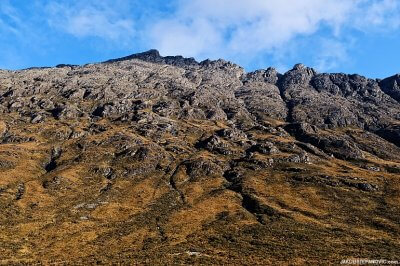 These slopes bring loads of water down, and so the trail sometimes doubles as a river. 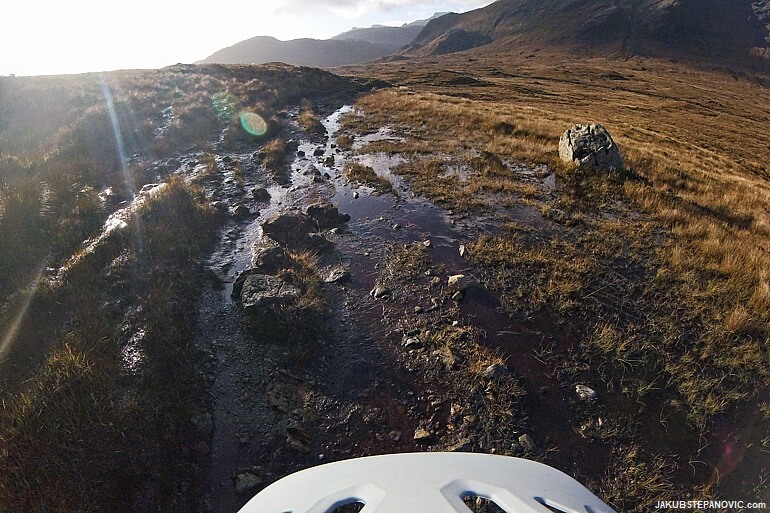 The hard-packed foundation provides surprisingly good traction, and so one can simply plough through the water and mud with ease. While one certainly gets wet by doing so, it is easier and more comfortable than navigating through such an environment on foot. It is more fun, too. Gliding over the terrain, lyrics from guys Hetfield / Ulrich came to mind:

"The less I have, the more I gain; off the beaten path I reign.." 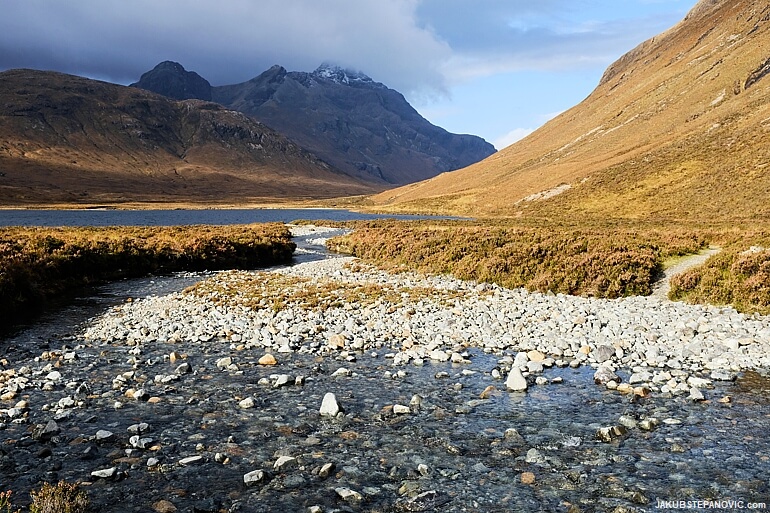 The more into the glen I went, the more rewarding it got. Happiness, hello! 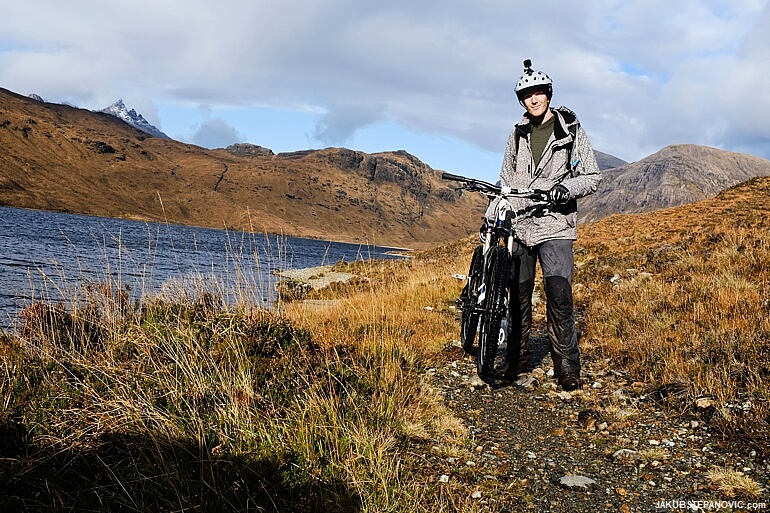 Each turn of the trail reveals either scenery beyond belief or some genuine riding fun. Like  these rock slabs: 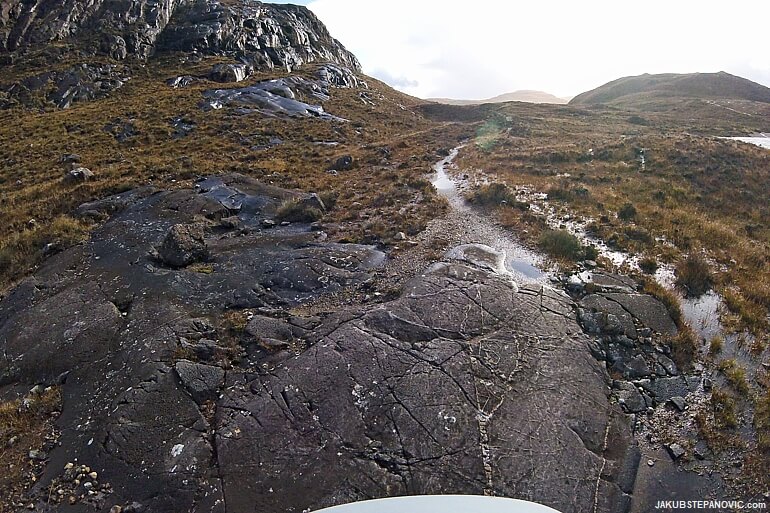 Eventually, the sea comes into view. And what a view it is! 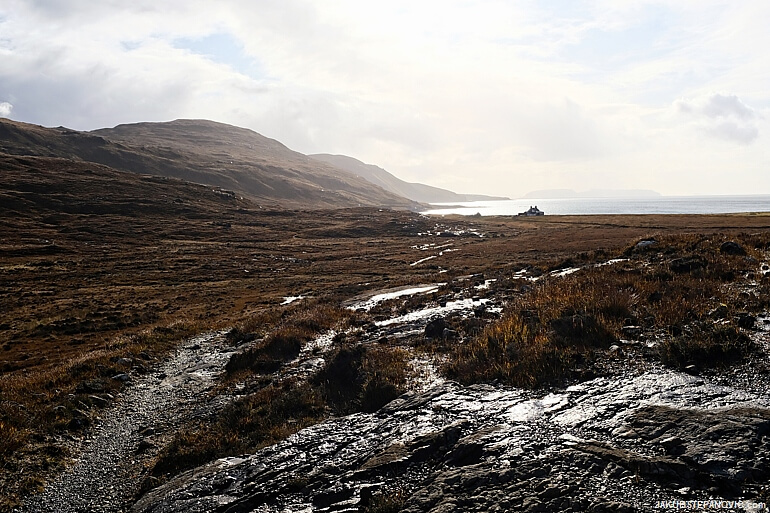 Down at the bay, named Camasunary, is a private estate. 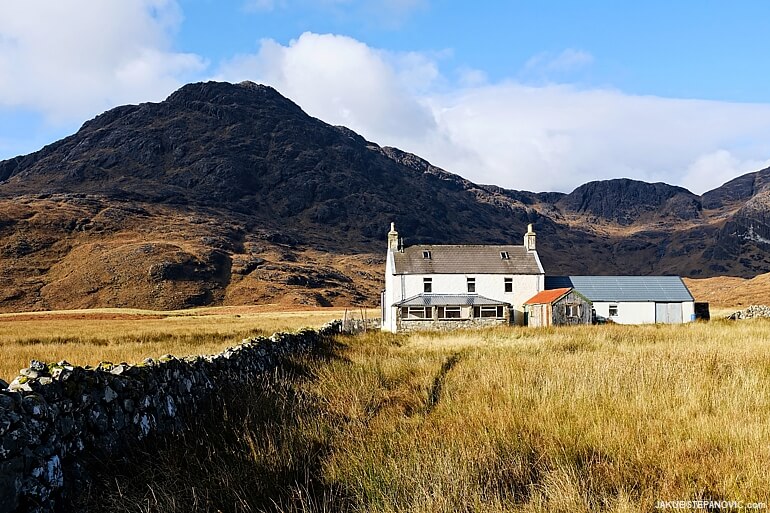 One heck of a lucky owner, for sure. Passing the structures, I cycled down on the beach. 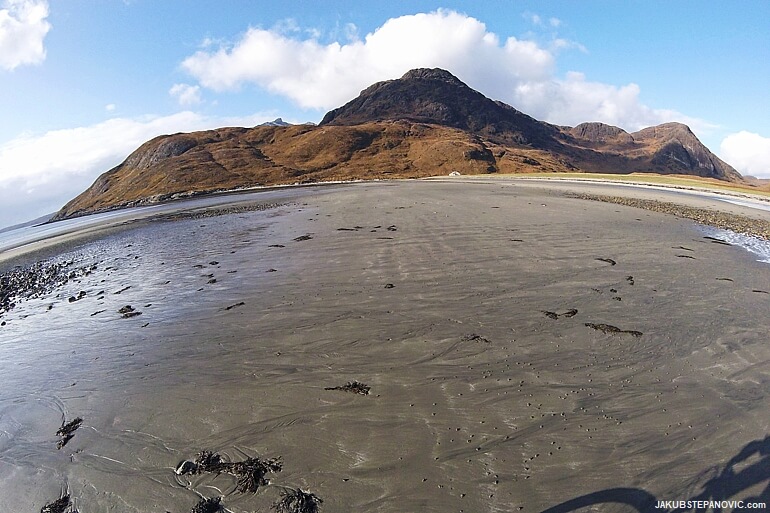 Seeking a lunch spot, I stopped by another of the estate's houses, now used as a storage. 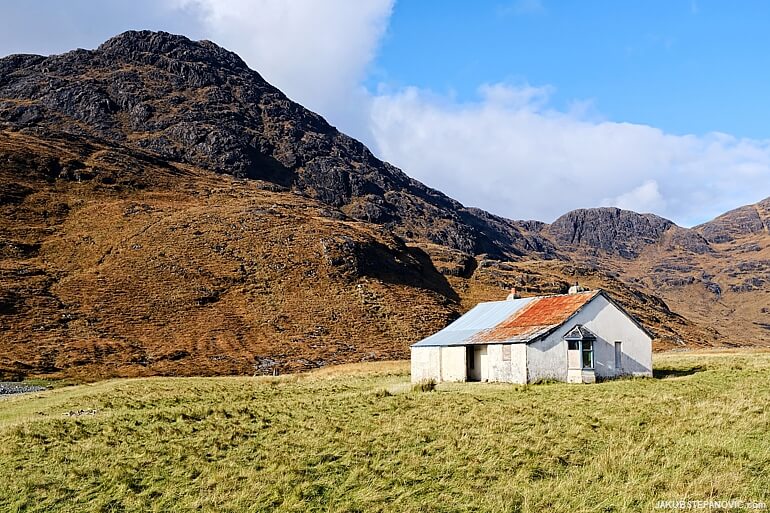 Its entrance has a grand view of the sea, and it is shielded from the elements. Win-win! 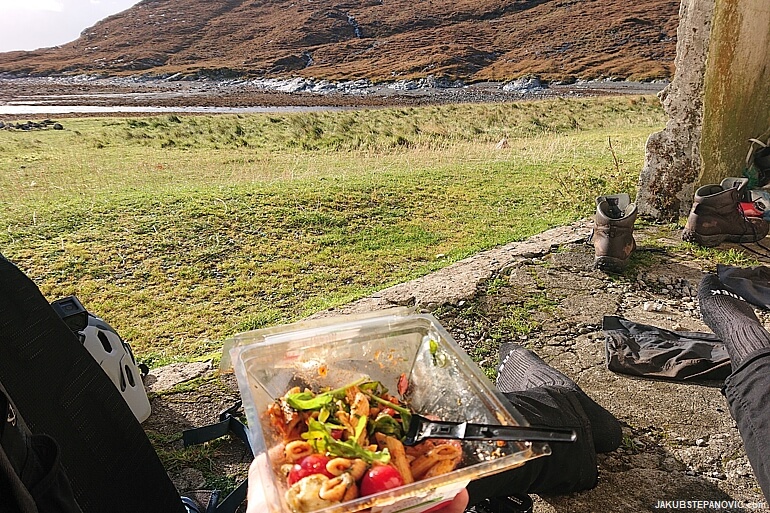 Between the beach and the Black Cuillin is a smaller hill, obscuring the view. So, after lunch, I planned to get around it to see the ridge fully exposed, keep on the other side, and go back to Sligachan. Here's a map to illustrate that: 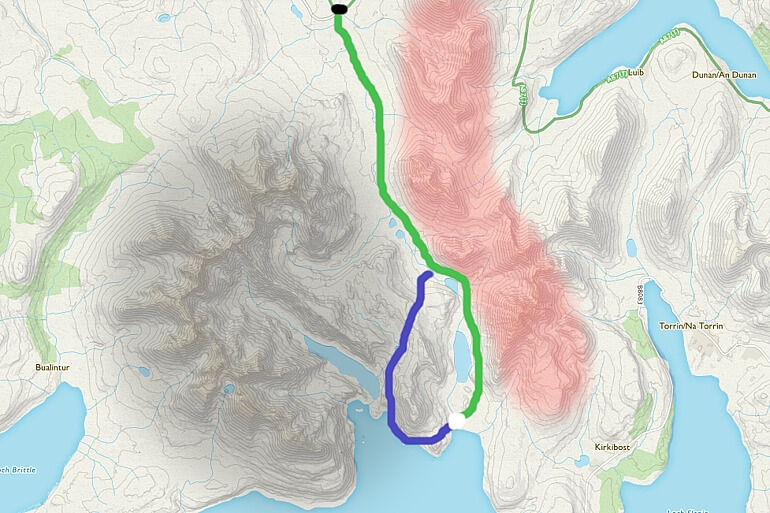 The black dot was the start; the green line's the completed trail through the glen, and the blue one was the plan. Red / black mark the division of the ridges.

Before I went, I relaxed in the sun for a moment. That's when I saw two hikers nearby, so I went to say hi. We started chatting and shared a few of our previous Skye stories. The couple has been here before and knew the area well, so I asked them about the loop that I wanted to do. They went silent, looked at each other, then back at me, and said: "umm, no." They warned me that the section of the trail facing the sea is tricky to walk, not to mention carrying a bike. But they agreed that the view is worthy, and if I can, I should hike up the hill. 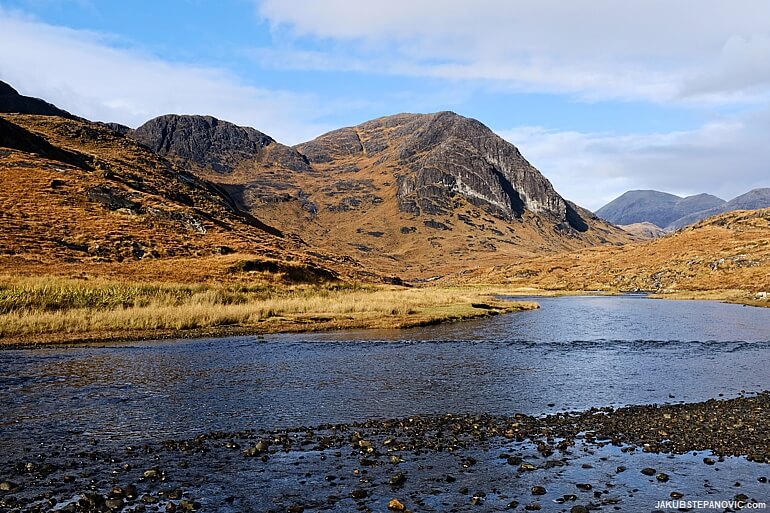 the hill between the ridges.

I thanked them for the advice and went for a walk to assess the situation. The weather was excellent, and the climb looked doable. However, I had a meeting with friends later, and going for that hike would mean that I'd be late. As it happens in places like this, there's no cellphone reception to let them know. A big inner fight started: emotions versus rationality, back and forth. These are often the hardest thing to get through. Never mind the physical aspect of cycling or hiking somewhere; beating your own head is the proper challenge. 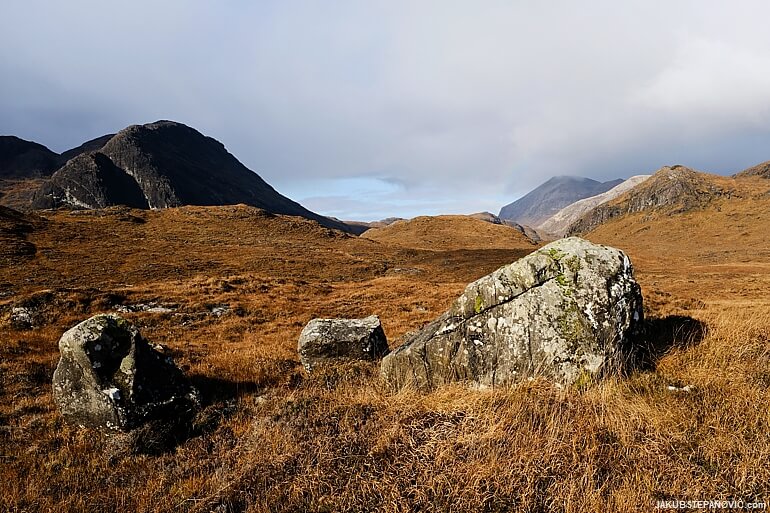 After counting my chances, I decided that it'll be wise to leave the hill for the next time. So, I used the time saved by skipping the loop to collect as much plastic junk from the beach as my backpack could hold (sea pollution is a real thing) and started my way back. 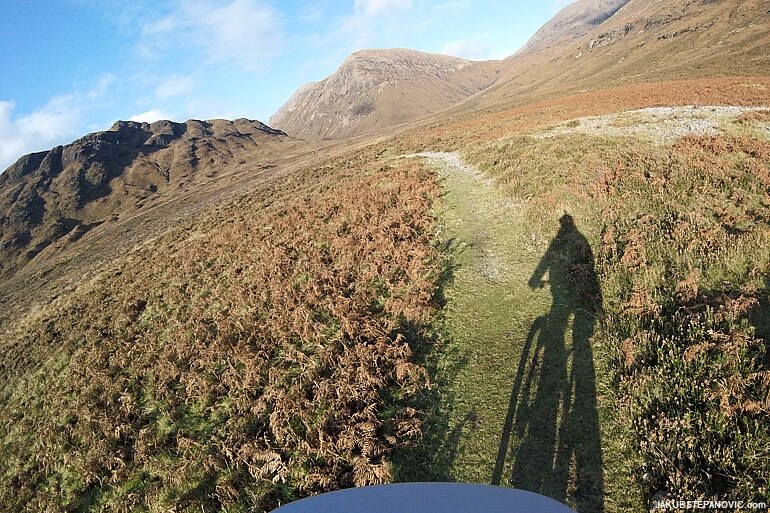 At first, I was still thinking about that view that I won't have. It didn't last long, though, as the views that I actually had were far too good to feel any upset. Look at that! 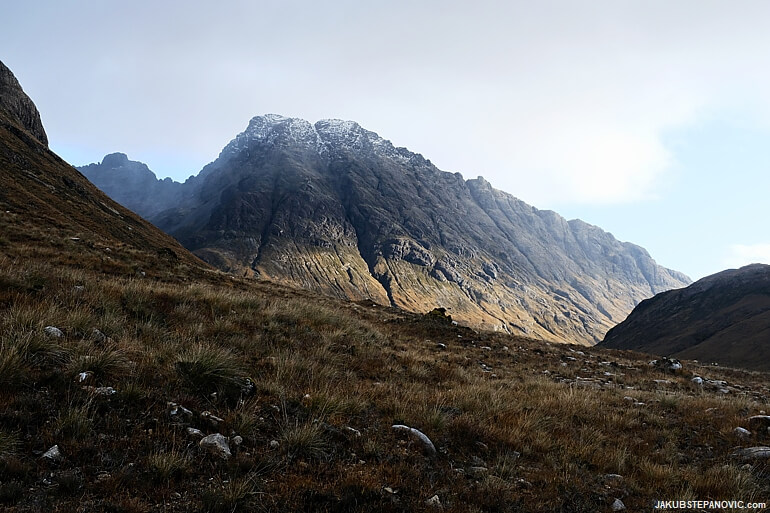 This particular mountain had a special appeal to me. It is Bla Bheinn, a peak that I climbed earlier this year. Seeing it from this perspective was amazing.

I noticed that the sky rapidly changed, replacing the sun with heavy clouds. It faded the golden colours away but made up for a spectacular light show: 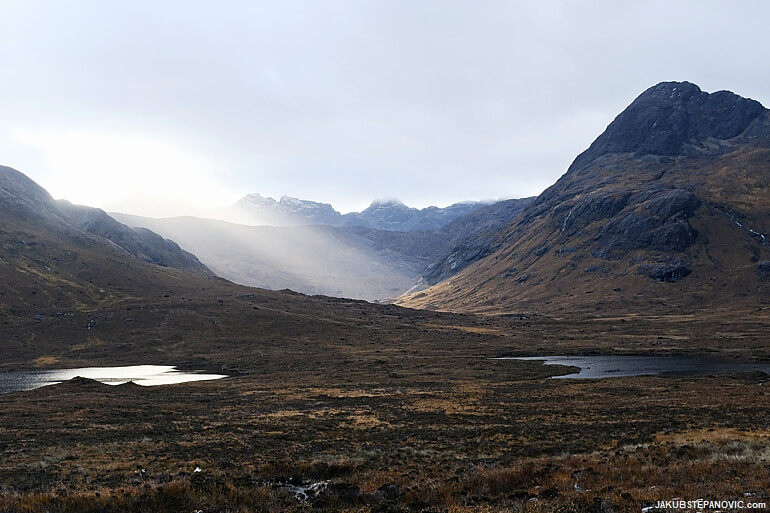 I knew, however, that these shows aren't for free. A storm was brewing. Sure enough, a wall of thick greyness went my way shortly after. I zipped my jacket, and we met. 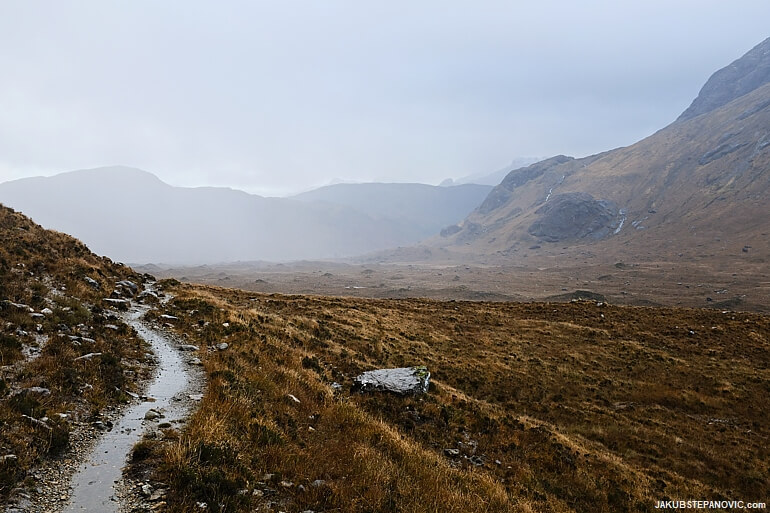 Heavy rain was giving a thorough wash to everything in its path. Then, the deep noise of falling water rose its pitch, and the water got replaced by hail. Having a helmet proved yet another benefit. Thankfully, the condition soon changed again, and the sky started to clear. 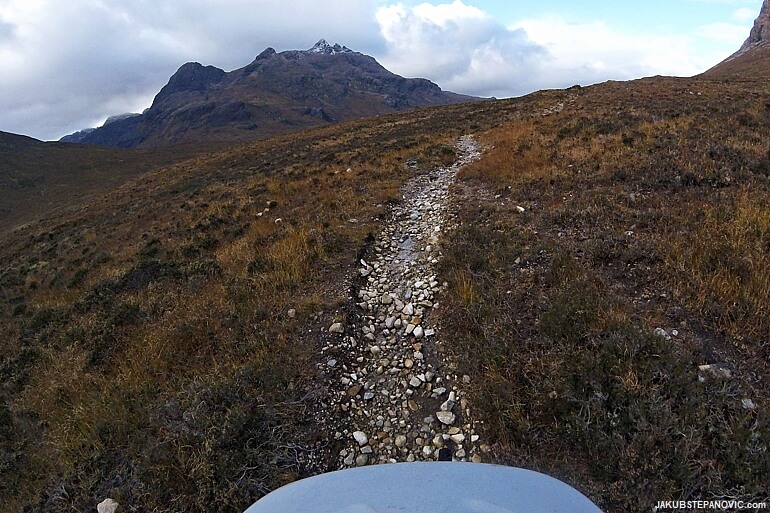 By the time I got back to the Sligachan, it was sunny again. 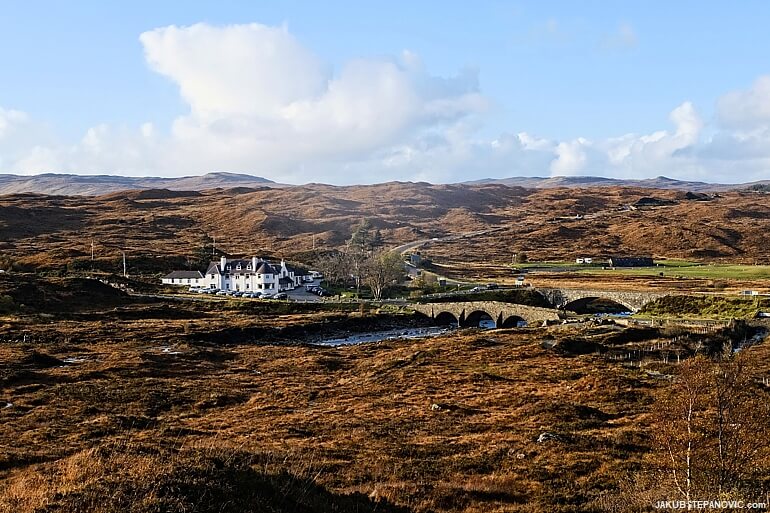 I finished the journey in the hotel behind the bridge — I had soup, a cake, and an endless smile on my face. Days like this are precious to me, absolute gold.

Alternatively, visit my Blog Archives for more topics and categories. Thanks for reading!